[0002] The invention relates to an improved method of forming extruded polystyrene foams into useful shapes.

[0003] Extruded polystyrene (XPS) foams have been used for some time in sound and insulation applications. The foams are formed by extruding continuously a heated plastic resin containing a blowing agent through a die, which upon exiting the die expands under, for example, steam or vacuum. Generally, these foams have been limited to applications only requiring simple shapes or complex shapes with a thin thickness. For example, simple shapes include toys that are die cut out of a board that are essentially flat including puzzles and imitation badges. Other more complex shapes, generally, have been made by thermoforming. Thermoforming, however, commercially has been limited to shapes using thin XPS sheets such as milk crates. This is due to the long times necessary to heat and cool the foam to enable molding the foam.
[0004] More complex shapes of polystyrene have, generally, been formed using partially foamed beads of polystyrene that still contain a blowing agent and air diffused therein as a result of aging of the foam from ½ to 6 days. The beads are then placed in a mold and heated sufficiently to expand the beads further such that they fill in the mold and weld to each other. Polystyrenes made this way are typically referred to as expanded polystyrene (EPS). Examples of EPS shapes include, coffee cups, cushioned packaging shapes (e.g., shapes that provide cushioning to shipped articles), and bike helmets. This method of forming polystyrene shapes suffers from a complex method involving multiple heating and cooling steps and costly molds that need to be heated and cooled.
[0005] Other 3-dimensional shapes of polystyrene foams have been made by dye cutting flat shapes and laminating them together as described in U.S. Pat. No. 6,129,969. This method suffers from multiple steps to fashion the shaped article.
[0006] Finally, polystyrenes foam properties have been modified by uniformly crushing the foam one or more times. This elasticizing/flexibilization allows for the foam to bounce back after being impacted or bent further without being broken. For extruded foams, the crushing is typically done by roll presses. Examples of such crushing are described in U.S. Pat. Nos. 3,445,406; 4,510,268; 5,114,656; 5,520,873; and 5,718,968.
[0007] WO 03/061938 A discloses a method for producing decorative strips, in particular decorative corner strips consisting of extruded polystyrene foam. According to said method, at least one surface of the decorative corner strip is moulded under pressure and thermal action using a heated die, which has an anti-adhesion coating and a separation agent is used. Extruded polystyrene panels, each of which is cut into strip-shaped blanks, are used as the material in said method. Once the surface of the blank has been moulded by the die, at least one thermally softened, fused softened zone is formed along the length of the blank with the help of at least one resistance heating element and at least one controllable angle bending tool, said zone cooling and hardening after completion of the thermal treatment, whereby a bending point with a reinforcing material crust is formed, which divides the blank into a central strut and at least one limb that is positioned at a predefined angle to said central strut.
[0008] Accordingly, it would be desirable to provide a forming method for extruded polystyrene that is able to quickly shape complex extruded polystyrene shaped articles and in particular thicker shaped foam articles (e.g., greater than about a couple of millimeters thick).

[0009] Surprisingly, a method has been discovered to quickly form complex, thick shaped styrenic polymer foam shapes.
[0010] A first aspect of the invention is a method to form a foam styrenic polymer comprising,
[0011] A second aspect of the invention is a method of forming a styrenic polymer foam shape comprising
[0012] Surprisingly, the methods of the invention allow for the fast production of shaped foam parts having complex curvatures on one or both faces of the plank and is of varying thickness without need for expensive thermal molding techniques.
[0013] The method may be used to form styrenic polymer foam shapes having at lease some portion where the thickness is greater than a few millimeters. Examples of such applications include automobile energy absorbing countermeasures, automobile sun visors, automobile head rests, automobile bumpers, automobile door panels, bicycle helmet foam padding, floral and craft foam articles, interior partition panels, concrete floor thermal insulation incorporating recessed grooves for continuous hydronic floor heat tubing, insulation boards with integral water drainage channels, interior and exterior decorative cornices, cushion packaging articles and exterior building façade panels.

[0051] The density profile through the thickness of each foam blank was tested using a QMS Density Profiler, model QDP-O1X, from Quintek Measurement Systems, Inc. Knoxville, TN. The High Voltage kV Control was set to 90%, the High Voltage Current Control was set to 23% and the Detector Voltage was approximately 8v. Data points were collected every 0.06 mm throughout the thickness of the foam. Approximate thickness of the foam samples in the plane of the x-ray path was 2 inches. Mass absorption coefficients were calculated for each sample individually, based on the measured linear density of the foam part being tested. The skin density, ρskin, was reported as a maximum value whereas the core density, ρcore, was averaged within an approximate 5 mm range. The density gradient, in units of percentage, was then computed in accordance with the following equation:

[0052] The compressive response of each material was measured using a Materials Test System equipped with a 5.0 displacement card and a 17.793 kN (4,000 lbf) load card. Cubical samples measuring the approximate thickness of each plank were compressed at a compressive strain rate of 0.065 s-1. Thus, the crosshead velocity of the MTS, in units of inches per minute, was programmed in accordance with the following equation:

where CSV, CSE and CSH correspond to the compressive strength in the vertical, extrusion and horizontal direction respectively. Thus, the compressive balance, R, in each direction can be computed as shown below:

1. A method to form a foam styrenic polymer comprising,

(b) creating a pressing surface by

(c) contacting the pressing surface of the foam plank with a die face, and

(d) pressing the foam plank such that the shaped styrenic polymer foam is formed; 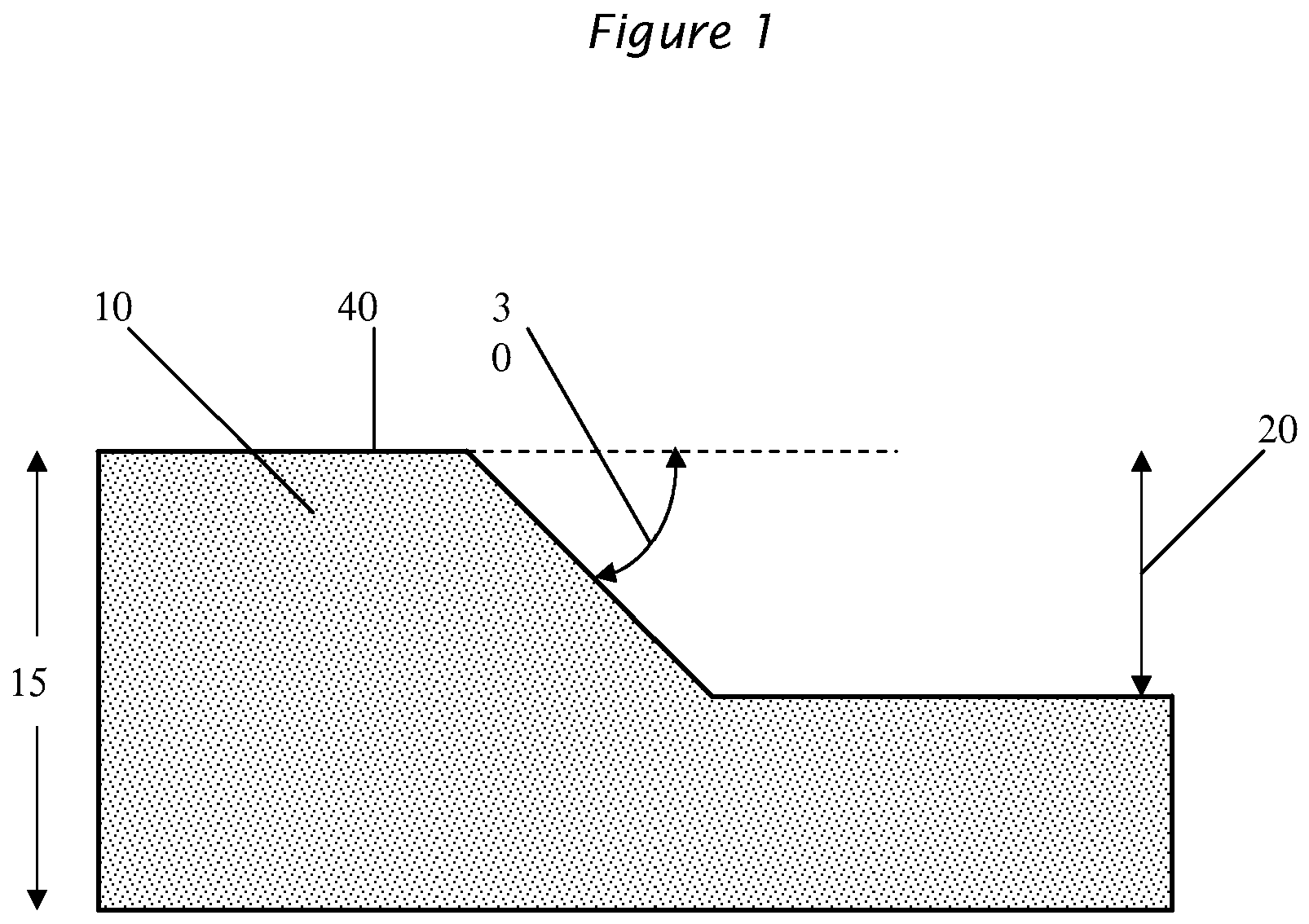 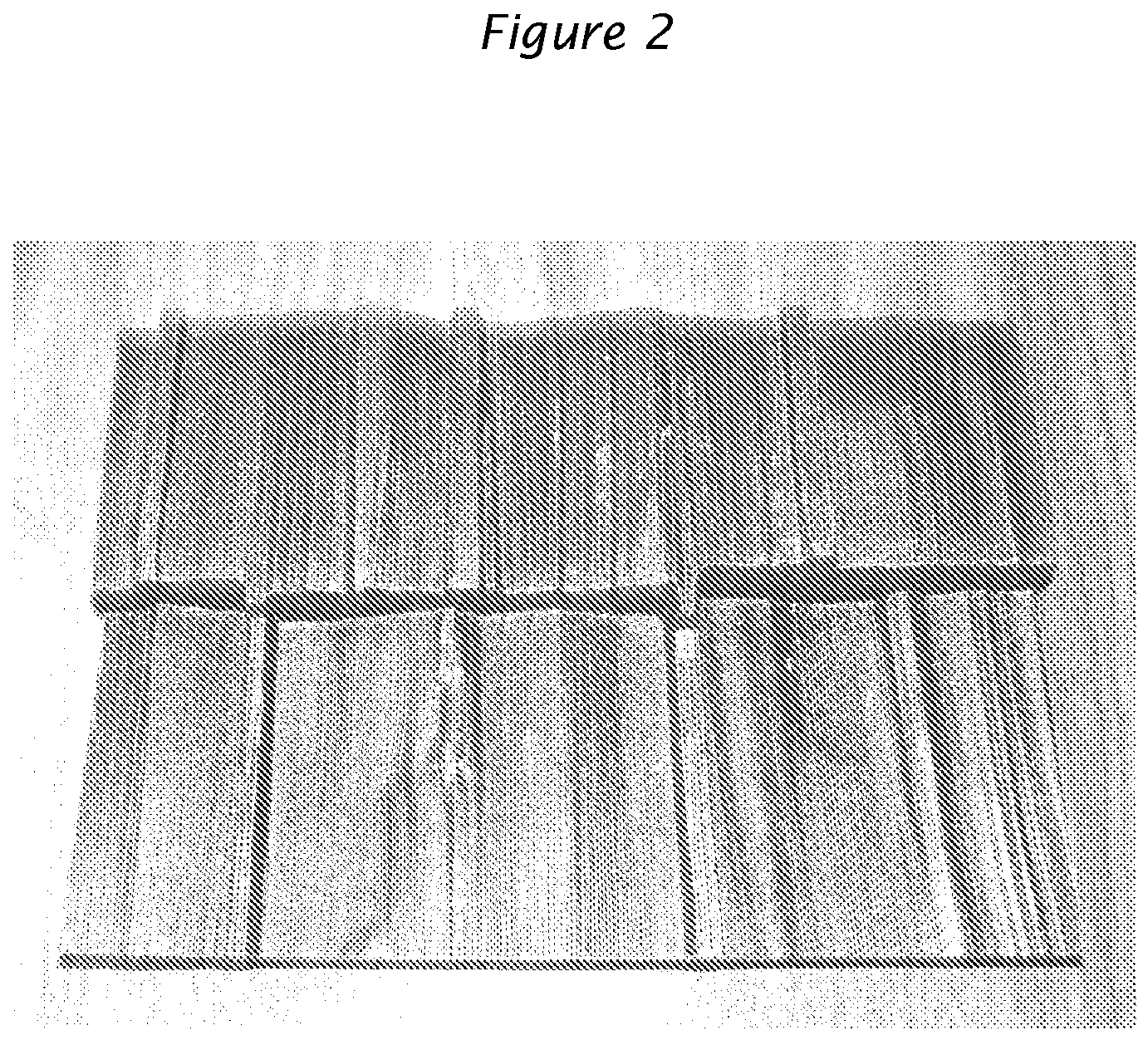 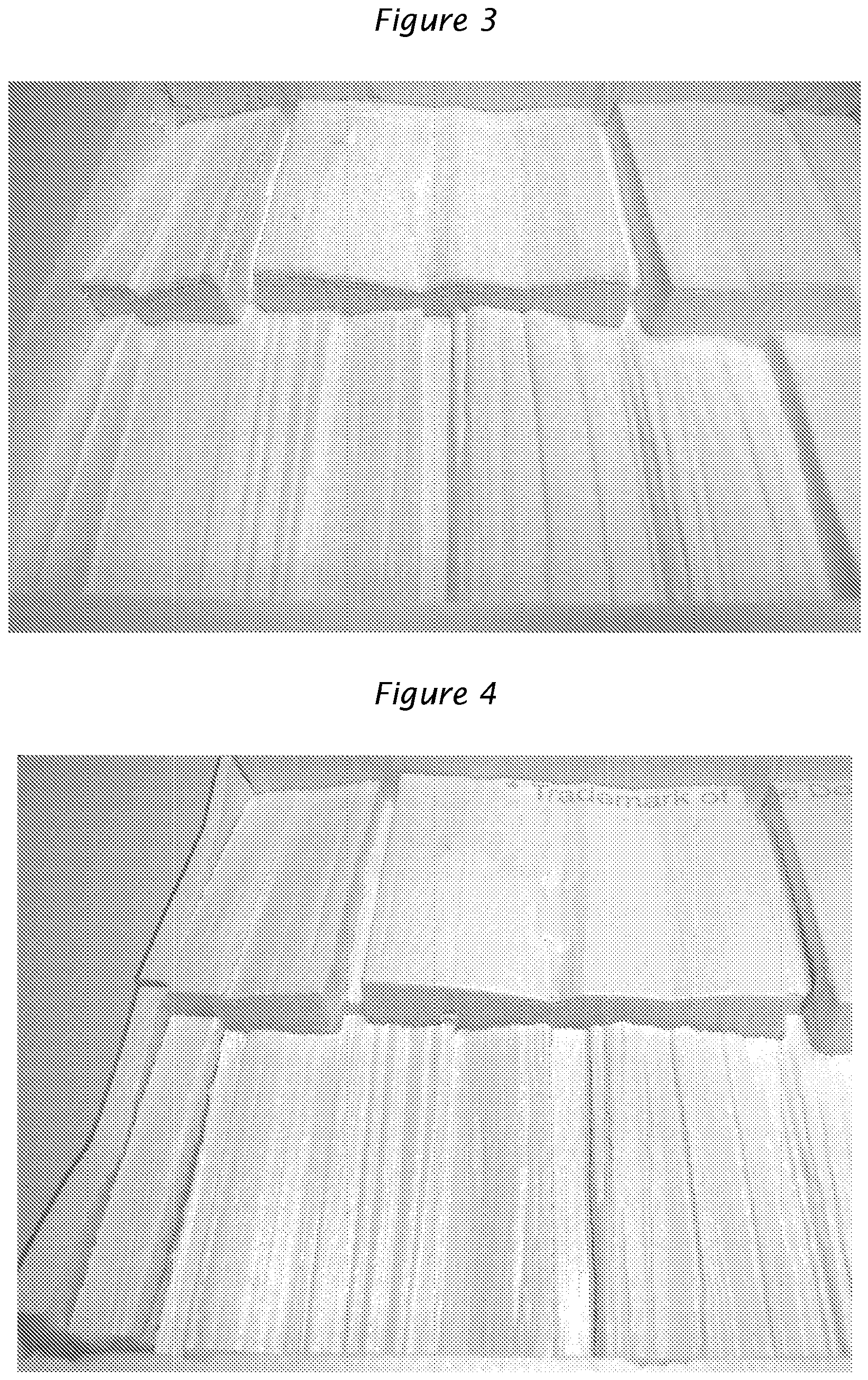 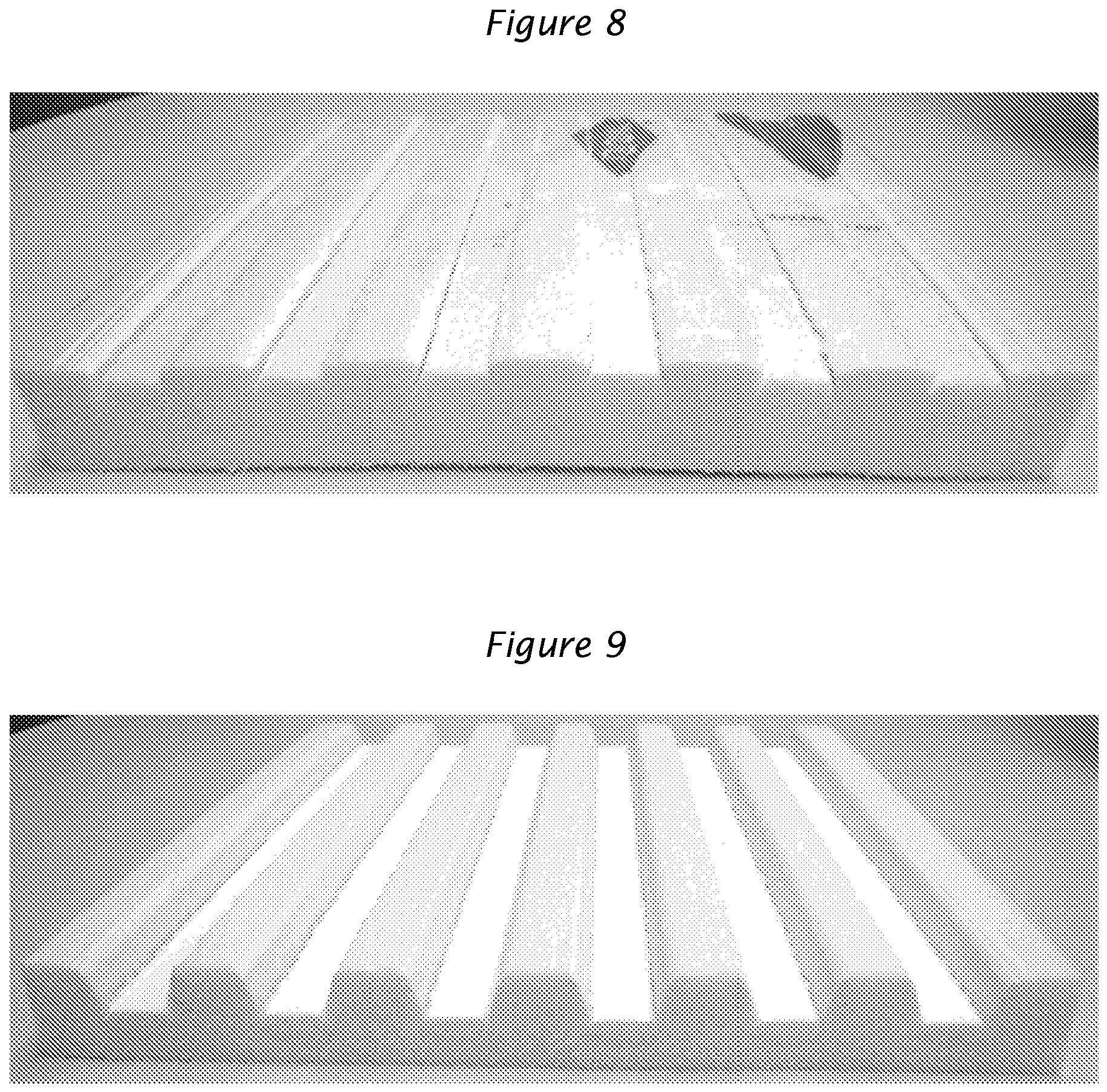 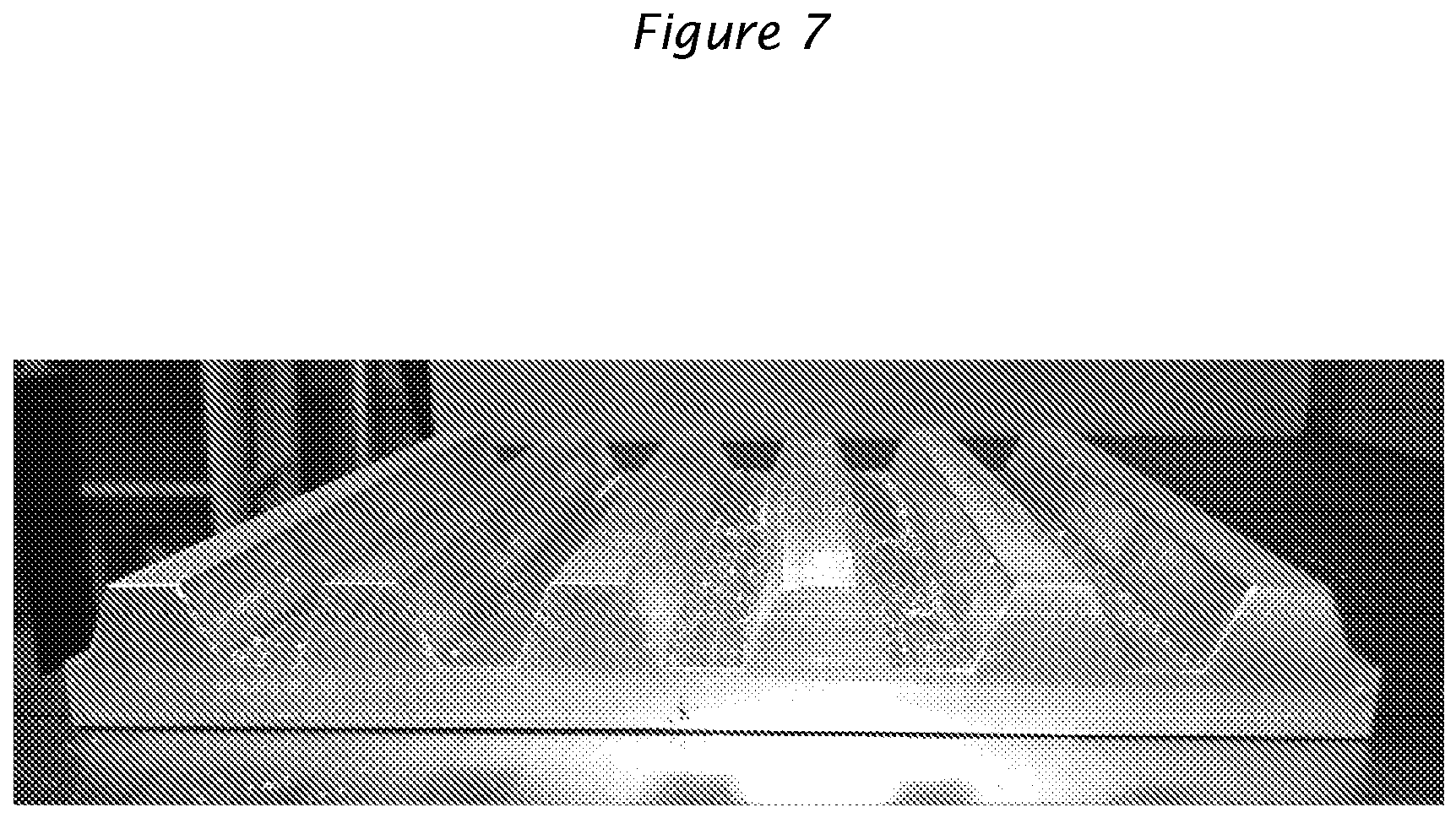