[0002] Optical sensing techniques, usable in smoke detectors, can be classified as transmission and light scattering techniques. Transmission measurements in early fire detection require impractically long optical paths. Intensity of the scattered signal depends on many factors besides the number of particles per unit volume and intensity of incident light. Modest improvements of light scattering signal at low smoke densities can be achieved by optimizing wavelength, scattering angle, detector sensitivity, intensity of the incident light, and polarization state of the incident light.
[0003] Acoustic agglomeration of aerosols and colloids is a well-known technique to manage fine particulate matter in pharmaceutical, environmental and other industrial applications. Basic concept is based on forming standing wave in acoustic resonator. Acoustic (usually ultrasound) pressure forces both small and large particles to jiggle along with air molecules. However, larger particles have larger slip factor and are not able to follow air movement (this is particularly true at ultrasonic frequencies) as well as smaller particles can. As result, aerosol particles experience increased collision frequency as compared to collision due to thermal motion alone.
[0004] Each collision may result in coagulation of particles where smaller particles disappear and larger particles emerge. As larger particles get formed, they tend to move to a location of one or more nodes in the acoustic field where they start to agglomerate (a phenomena called flocculation). If the field is powerful enough they tend to levitate. In sum, if a standing wave resonant acoustic field is established in a space containing a small concentration of aerosols then in a few seconds, those particles will coagulate into larger particles at nodes of the acoustic field.
[0005] Optical smoke detectors are advantageous in that they will respond to smoldering-type fires and potentially can provide early warnings thereof. Such technologies are also usually readily acceptable world wide.
[0006] There is thus a continuing need to improve performance of optical-type smoke detectors. Preferably, sensitivity could be increased without at the same time increasing incidences of false alarms. WO 2004/102499 A1 discloses a smoke detector according to the preamble of claim 1.

SUMMARY OF THE PRESENT INVENTION

[0009] FIG. 1 is a block diagram of an apparatus which embodies the invention.

a flow path (14) for ambient atmosphere carried by the housing;

a source of ultrasonic signals (20) carried by the housing, wherein the source is adapted to generate a resonant acoustic field of a predetermined intensity (24) in at least a portion of the flow path where the source comprises an ultrasonic transducer (20); an aspirating element (34) that induces movement of ambient atmosphere along the flow-path; and

characterized in that the acoustic field is adapted to coagulate particulate matter carried by the ambient atmosphere prior to that particulate matter entering a sensing region of the sensor and wherein signals from the smoke sensor are coupled to a control unit (30) for analysis and a determination as to the existence of one or more predetermined smoke related conditions.

2. A detector as in claim 1 which includes an aspirating element that induces movement of ambient atmosphere along the flow-path.

3. A detector as in claim 1 where the sensor comprises at least one of an optical-type sensor, an ionization-type sensor, a gas sensor and a thermal sensor.

4. A detector as in claim 1 where the aspirating element moves the particulate matter to a sensing region of the sensor.

6. A detector as in claim 1 where the sensor comprises one of an optical-type or an ionization-type sensor particulate sensor.

7. A detector as in claim 6 where the sensor comprises a photo-electric type smoke sensor.

8. A detector as in claim 6 where the acoustic field extends, in part, into the sensing region.

9. A detector as in claim 8 where the aspirating element includes an electrically actuatable flow inducing member.

10. A detector as in claim 9 where control circuits are coupled to the aspirating element.

11. A detector as in claim 10 which includes a filter in the flow path.

producing by an aspirating element (34) a flow of particulate carrying ambient atmosphere to be sensed;

generating with an ultrasonic transducer (20) a resonant acoustic field of a selected intensity to form agglomerated particles;

directing the flow through the field thereby producing a flow of coagulated particles;

sensing with a smoke sensor (28) the coagulated particles and determining the existence of one or more predetermined smoke related conditions. 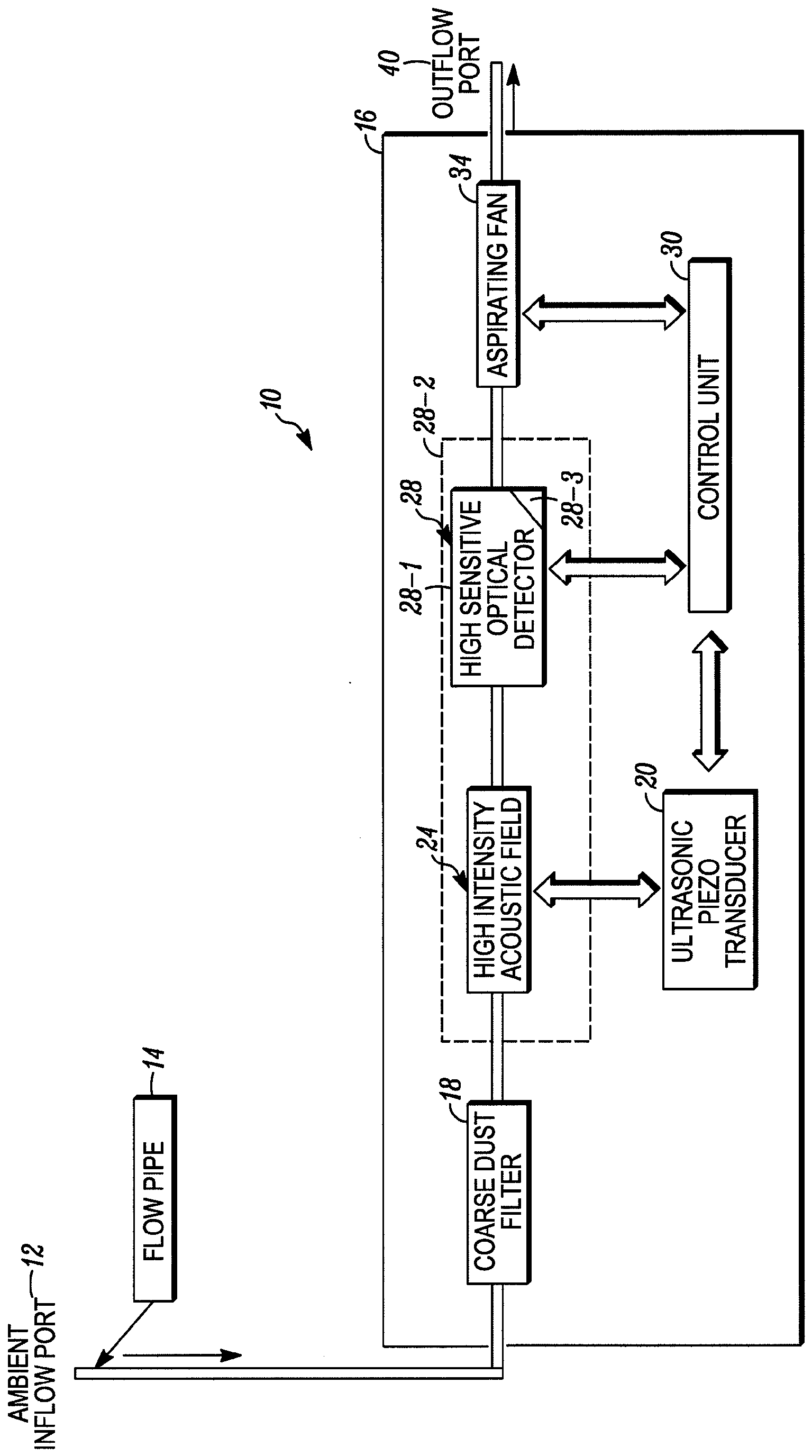