[0002] Peramivir is a member of a class of antiviral agents that work by inhibiting viral neuraminidase, an enzyme essential for the influenza virus to replicate and infect its hosts. In addition to influenza A and B, avian influenza virus (H5N1) has been shown to be sensitive to peramivir. More specifically, depending on the influenza strain, peramivir has been determined to be 2 to 10 times more potent as a neuraminidase inhibitor than oseltamivir (Tamiflu®) and zanimivir, based on experimentally determined concentrations of each required for 50% inhibition of neuraminidase activity in vitro.
[0003] It has been reported that studies in rodents and primates have established the safety and efficacy of intramuscular injection of peramivir in a mouse influenza model. Further intravenous and intramuscular formulations of peramivir are reported to have been evaluated in pre-clinical animal models with success. However, human studies with oral forms of peramivir have demonstrated very poor oral bioavailability of peramivir. In particular it has been reported that in a phase III clinical trial of an oral formulation of peramivir, the antiviral activity against influenza A and B did not reach statistical significance. Formulations with improved bioavailability have been shown in US 7208176 B2 with several permeability enhancers, however, not with glycerol. Accordingly there is a need for neuraminidase inhibitor compositions which exhibit improved bioavailability and efficacy when administered orally for treatment or prevention of influenza infections.

Figure 1 shows the effect of permeability enhancers on peramivir transport across Caco-2 cell monolayers. Caco-2 cell permeability assays were conducted according to standard procedures using monolayers having a minimum transepithelial electrical resistance (TEER) of >200Ωcm2. Except as is indicated each enhancer was present at 1% final concentration (w/w) in HBSS. The fold enhancement in transport rate over control (peramivir in HBSS alone) provided by each enhancer is shown. The line indicates a ratio of 1:1 (no enhancement).

Figure 3 shows the effect of increasing Gattefosse compositions on permeability enhancement of peramivir across Caco-2 cell monolayers. In contrast to results using Capmul MCM L8, enhancement increases are linear up to at least 2% final concentration, suggesting the maximum potential enhancement occurs at much higher concentrations.

[0007] Peramivir refers to the compound (1S,2S,3S,4R)-3-[(1S)-1-Acetamido-2-ethylbutyl]-4-(diaminomethylideneamino)-2-hydroxy-cyclopentane -1-carboxylic acid, and has the chemical structure shown below: 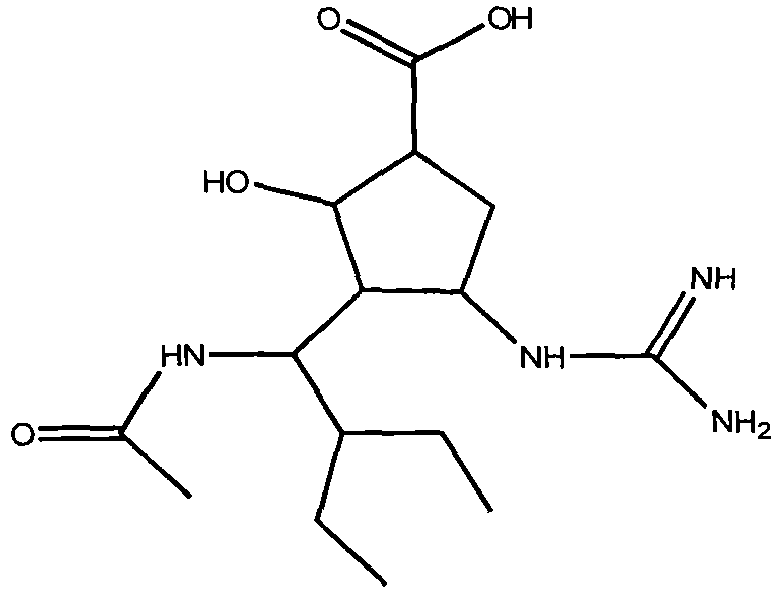 [0053] This is a prophetic example. To be effective, a proposed enteric-coated peramivir oral dosage form should contain an adequate amount of a permeability enhancer to impact either the paracellular or transcellular transport pathways, or both. Once such a condition has been identified, the amount of peramivir can be appropriately scaled to achieve the desired blood level. For example, the amount of permeability enhancer should take into account the volume of a human duodenum: 750-1000mg and 1500-2000mg of enhancer should roughly correspond to the dose at the lower and upper ranges, respectively, of the proportionate volume of the human duodenum.
[0054] An initial human PK trial should be designed to test the utility of both Capmul® MCM L8 and glycerol. A four- or five-way crossover protocol utilizing enteric-coated softgels is envisioned. This involves dosing subjects with either one or two softgels in separate arms and examining the PK data to determine if the peramivir blood levels are dose proportional. Peramivir dose proportionality would indicate a near saturating effect from the lower dose of the permeability enhancer used. Alternatively, separate dosage forms can be manufactured for each arm wherein peramivir is kept constant and two amounts of permeability enhancer is used. The following arms are proposed to both test permeability enhancer function and to limit the number of dosage forms that must be manufactured.
[0055] Arm 1: 150 mg peramivir, 765 mg Capmul MCM L8 in a single dosage form (765 mg of Capmul MCM L8 is the highest currently approved amount on the FDA inactive ingredient list.)
[0056] Arm 2: 300 mg peramivir, 1530 mg Capmul MCM L8 dosed as two gelcaps used in Arm 1.
[0057] Arm 3: 150 mg peramivir, 1000 mg glycerol in a single dosage form (although 223.8 mg of glycerol is the highest currently approved amount, its safety and use as a food additive should not present a significant regulatory barrier for increasing that limit.)
[0058] Arm 4: 300 mg peramivir, 2000 mg glycerol dosed as two gelcaps used in Arm 3.
[0059] Arm 5: 150 mg or 300mg peramivir plus inert filler in a single dosage form (this is an optional negative control arm included to scale the impact of the permeability enhancers. It may be unnecessary depending on prior clinical experience with oral peramivir.)
[0060] It is anticipated that results from this trial will provide important information to demonstrate the potential to deliver peramivir orally and to use as a guide in defining an optimized formulation and peramivir drug load.

a therapeutically effective amount of a polar agent that is a neuraminidase inhibitor, and

2. An oral dosage form according to claim 1, wherein the neuraminidase inhibitor and the permeability enhancer form a mixture that is emulsified.

5. An oral dosage form according to any preceding claim, wherein the neuraminidase inhibitor is selected from oseltamivir, zanamivir and peramivir.

6. An oral dosage form according to any preceding claim, which is in the form of an encapsulated gel comprising an outer gel cap containing the composition.

7. An oral dosage form according to any preceding claim, wherein the neuraminidase inhibitor and permeability enhancer are mixed by sonication. 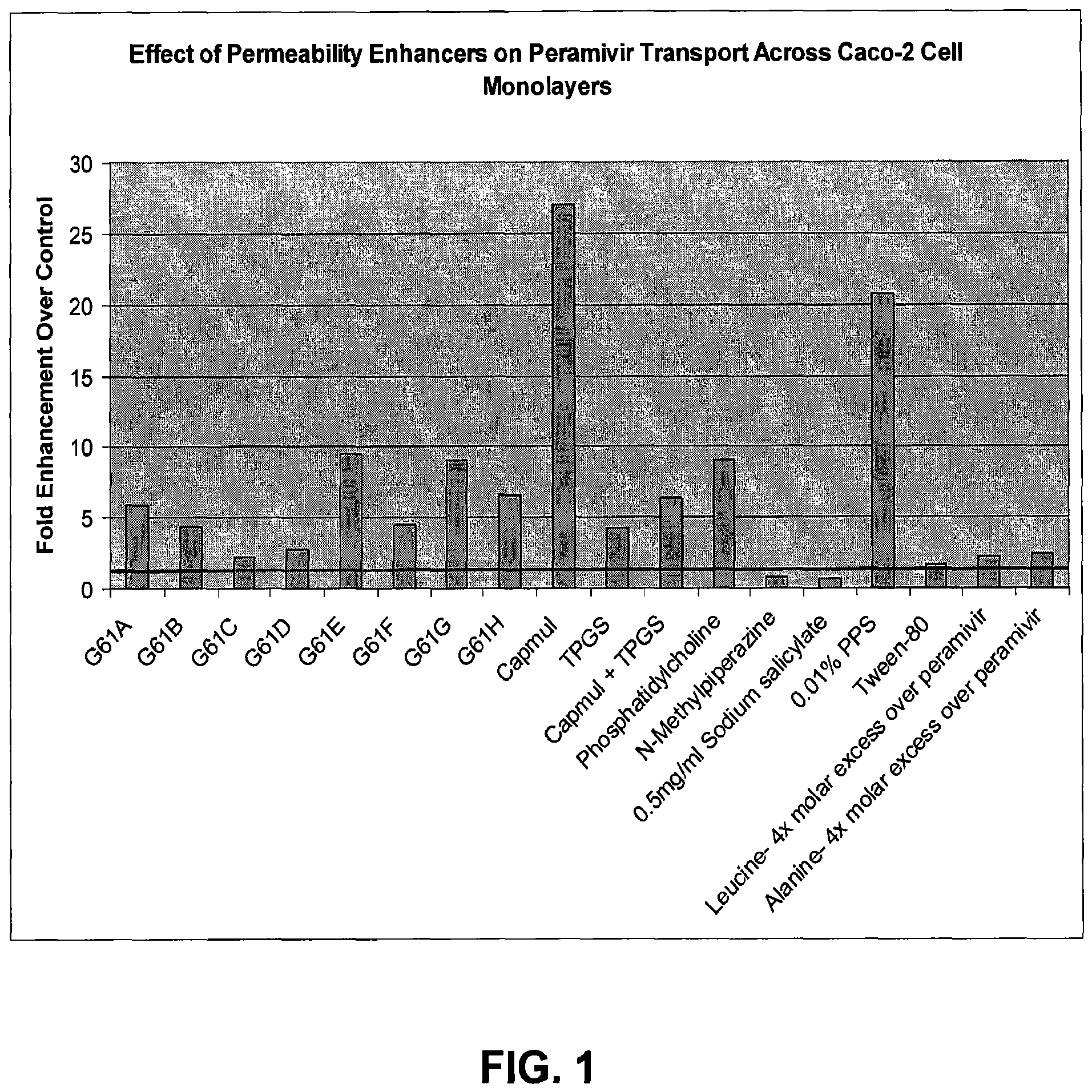 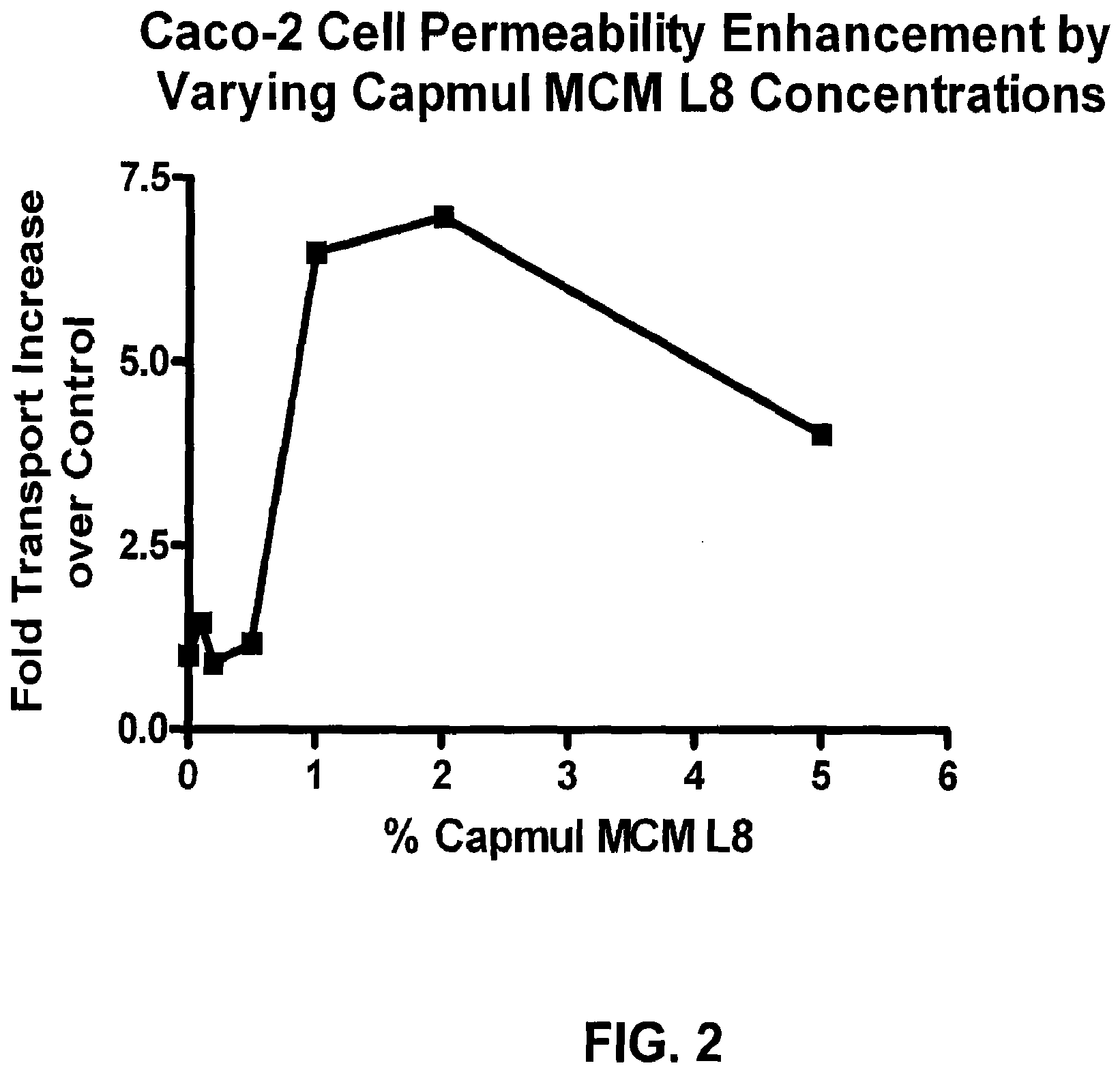 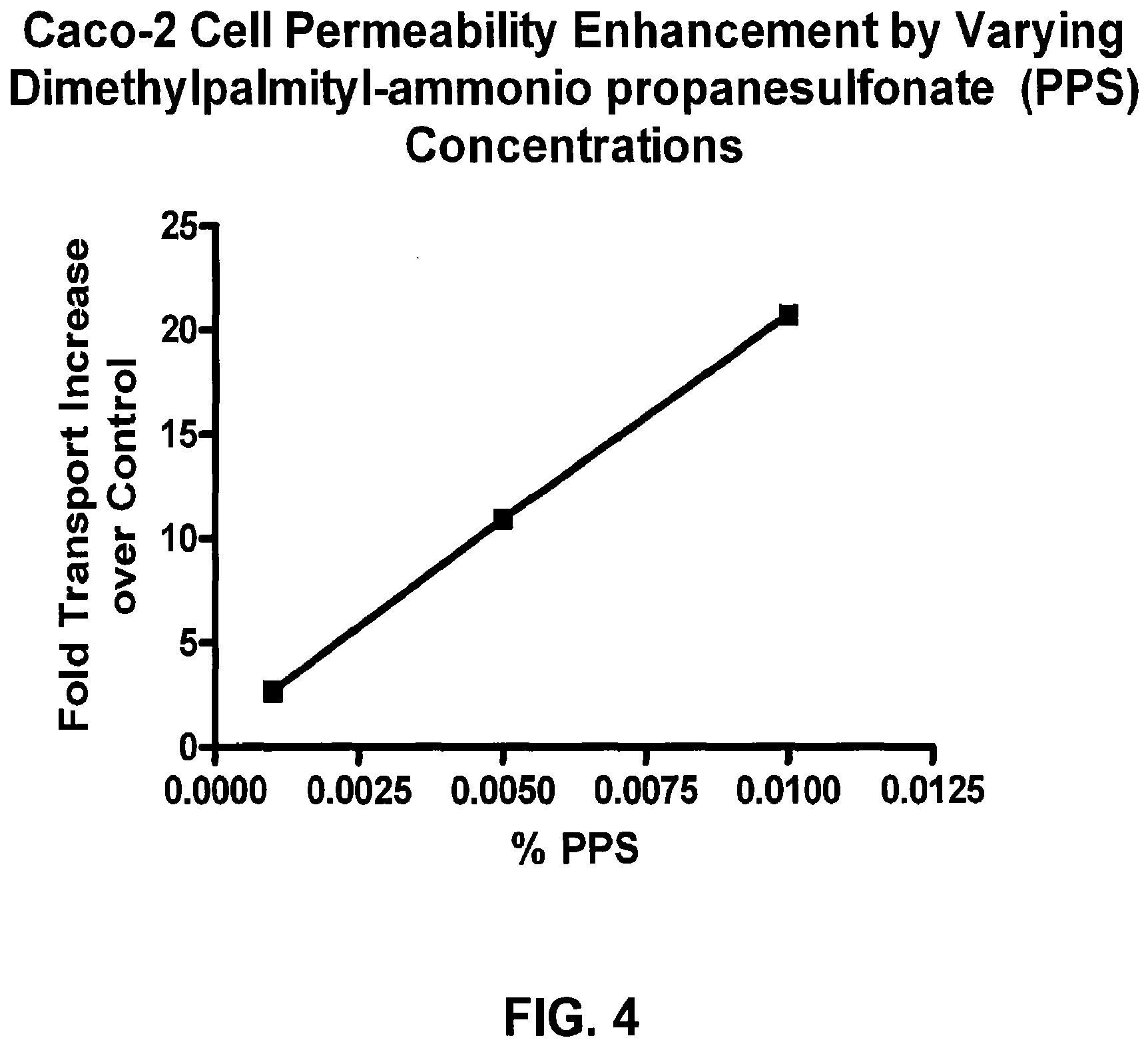 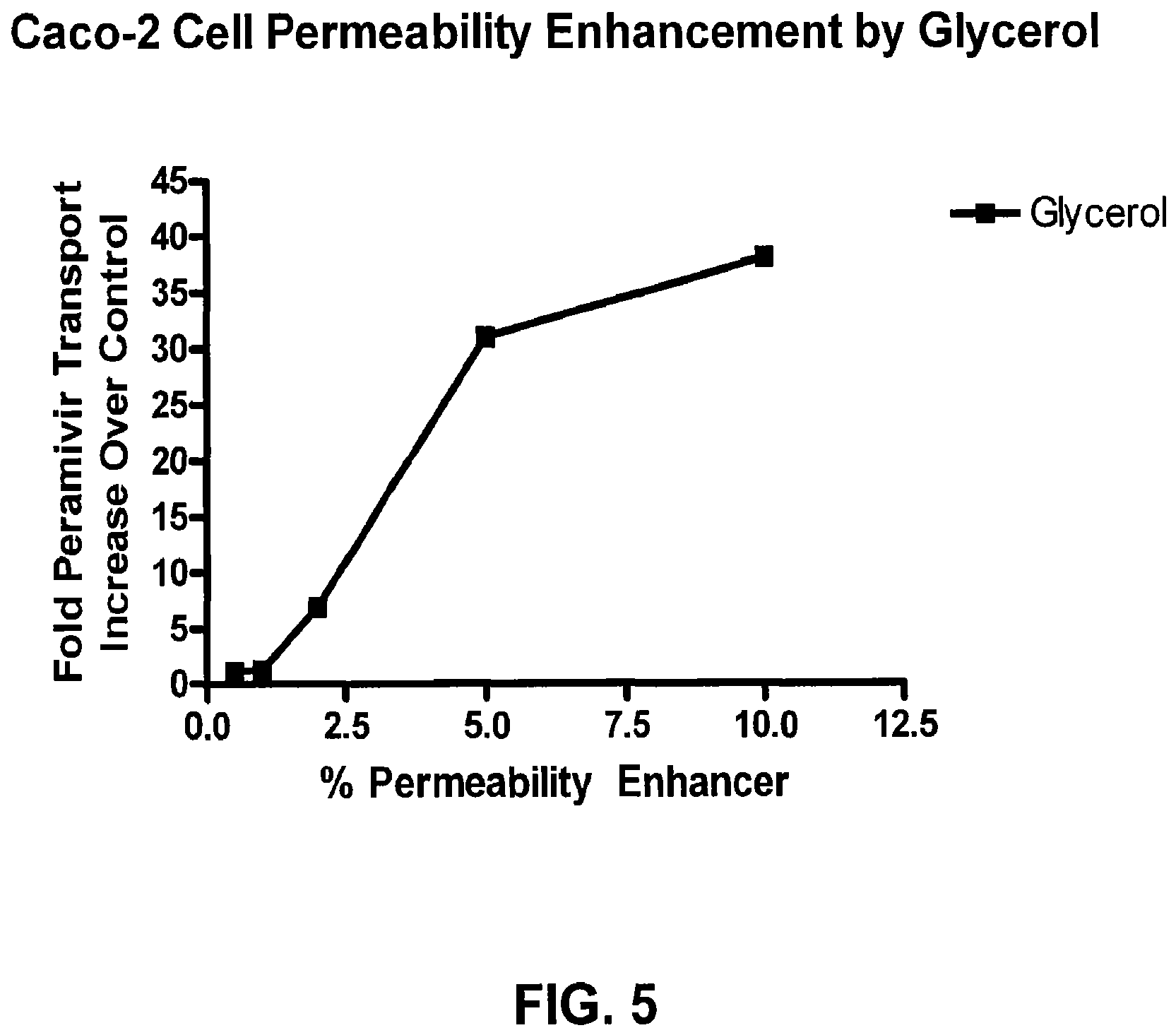