[0002] One example of a detection system is based on excitation of a sample in order for it to induce fluorescence that is detected to analyze the sample. The example has been used in nucleic acid testing (NAT). This is a core element in molecular diagnostics for detecting genetic predispositions for diseases, for determining RNA expression levels or identification of pathogens, like bacteria and viruses that cause infections.
[0003] In many cases, particularly in the identification of pathogens, the amount of target DNA present in a reasonable sample volume is very low, and this does not allow direct detection. Amplification techniques are necessary to obtain detectable quantities of the target material. Different amplification techniques have been proposed and are used in daily practice. The most widely used are based on the so-called Polymerase chain reaction (PCR).
[0004] The amplification involves the denaturing of double-stranded DNA at elevated temperature (typically > 90 degrees Celsius), specific binding of primers to the DNA sample at a reduced temperature (approximately 65 degrees) and copying of the original sequences starting from the primer position (at approximately 70 degrees). This procedure is repeated and in every cycle the amount of DNA with the specific sequence is doubled (when proceeding at 100% efficiency).
[0005] After amplification, the presence of target DNA is detected by measuring the fluorescence intensity of the labeled amplified DNA at the end-point, for instance after electrophoretic separation in a capillary or after hybridization to so-called capture probes which are applied in spots on a surface over which the amplification product is flowed. Such methods are referred to as end-point PCR detection methods. These methods in general do not allow a quantitative determination of the initial concentration of a particular DNA sequence, but rather a qualitative answer of whether a certain target sequence was present in the sample or not.
[0006] For a quantitative determination of the concentration of target DNA the so-called quantitative (q-PCR) or real-time PCR technique is available. q-PCR is based on the general method of PCR amplification but it allows monitoring the DNA concentration dynamically, at the end of every amplification cycle. This is based on special fluorescent probes that luminescence only when hybridized to the amplified DNA product.
[0007] Different approaches are known, and two are shown schematically in Fig. 1. In Fig. 1a, the CBRgreen fluorophore as represented by the circles are quenched, i.e. they do not fluoresce if not incorporated into a double-stranded DNA molecule. They become fluorescent when bound to a double-stranded DNA, as shown at 10. With increasing concentration of double-stranded DNA after every cycle of the PCR, the fluorescence signal will increase and must be measured to analyze the replication situation.
[0008] An alternative approach uses the so-called Taq Man probe shown schematically in Fig. 1b. This approach is bound to a specific sequence of single-stranded DNA after denaturing. In this state, energy transfer to an adjacent dye quenches the fluorophore. When the sequence is replicated starting from the primer, the probe is chopped and removed from the template as schematically shown. The amount of fluorescent signal is proportional to the amount of released probe 12 that is proportional to the number of DNA molecules.
[0009] Several alternative probe techniques have been developed with similar characteristics.
[0010] It will be apparent from the introduction, that the detection of fluorescence is required both for a qualitative determination of the presence of a particular target DNA sample, and for a quantitative determination of the amount of DNA present in a sample.
[0011] Document US 2006/0147176 discloses an optical microscope having a light beam directed toward a sample, wherein a phase of the light beam is varied within a specified range so that the sample is irradiated while being focused at different depths.
[0012] Document JP 5005043278 discloses an apparatus for determining a diffusion coefficient of a substance a function of diffusion length. The apparatus involves changing a beam diameter of incident laser light to a confocal microscope in order to change the area of a sample which is irradiated by the light.

[0053] Examples of the invention will now be described in detail with reference to the accompanying drawings, in which:

Figs. 1a and 1b show schematically two techniques for generating fluorescence during DNA replication in a quantitative PCR technique;

Fig. 2 shows a PCR apparatus of the invention;

Figs. 3a and 3b are used to explain a first way of changing a mode of operation of the apparatus of Fig. 2;

Figs. 4a and 4b are is used to explain a second way of changing a mode of operation of the apparatus of Fig. 2;

Fig. 5 is used to explain a third way of changing a mode of operation of the apparatus of Fig. 2;

Fig. 6 is used to explain a fourth way of changing a mode of operation of the apparatus of Fig. 2;

Fig. 7 shows a first example of detector arrangement which can be used in the apparatus of Fig. 2;

Fig. 8 shows a second example of detector arrangement which can be used in the apparatus of Fig. 2;

Fig. 9 shows a third example of detector arrangement which can be used in the apparatus of Fig. 2; and

Fig. 10 shows another example of PCR apparatus of the invention;

a radiation focusing arrangement (26) for providing the input radiation to an analysis region of a sample (20);

a radiation detector (28) for detecting the collected output radiation;

means for altering the focal depth of the radiation focusing arrangement, or

means (40) for introducing aberration to the input radiation between the radiation source and the analysis region.

(ii) focusing the input radiation thereby creating an analysis region on a sample,

14. A controller adapted to control a detection system according to claim 1 to perform the steps of the method of claim 13. 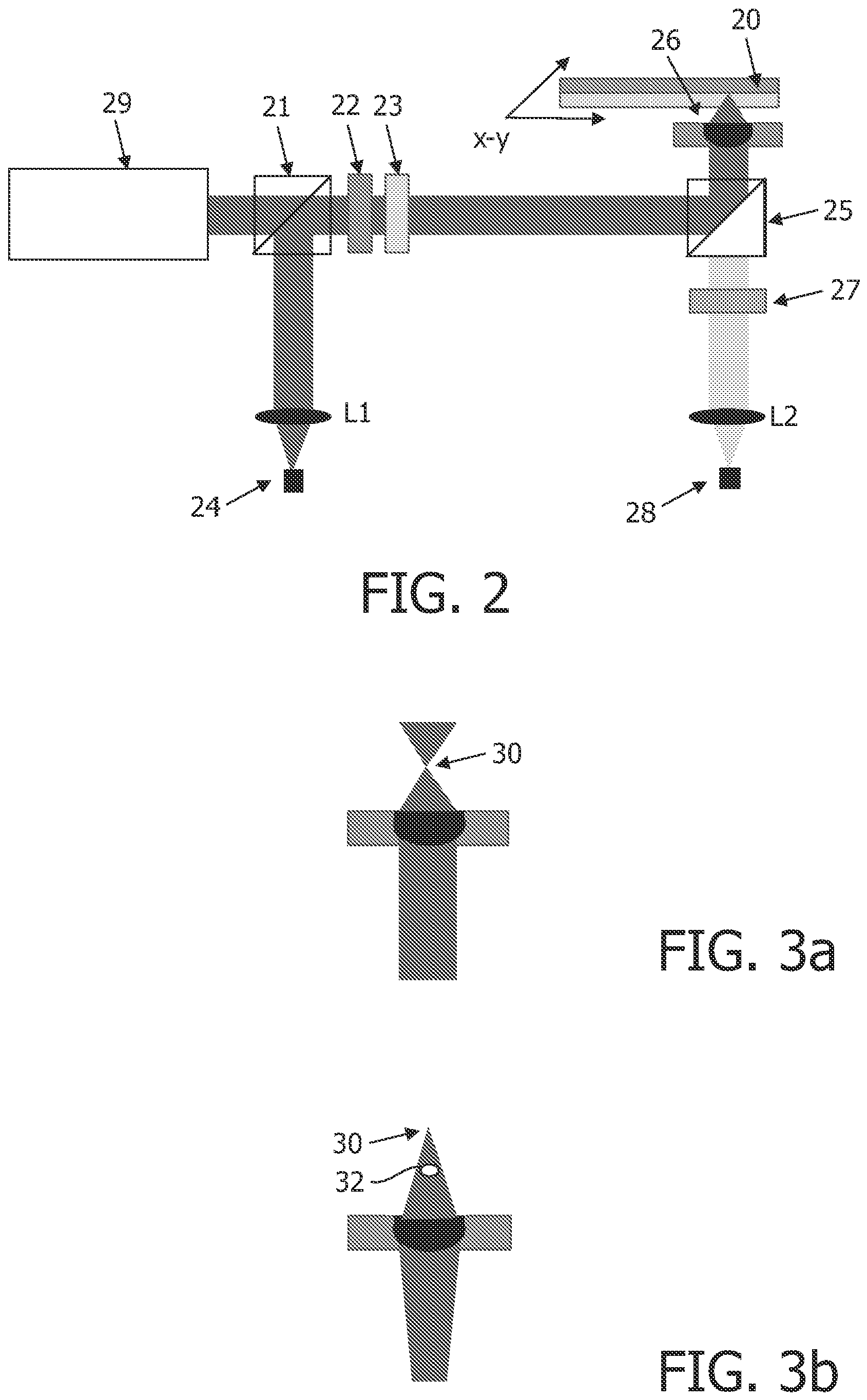 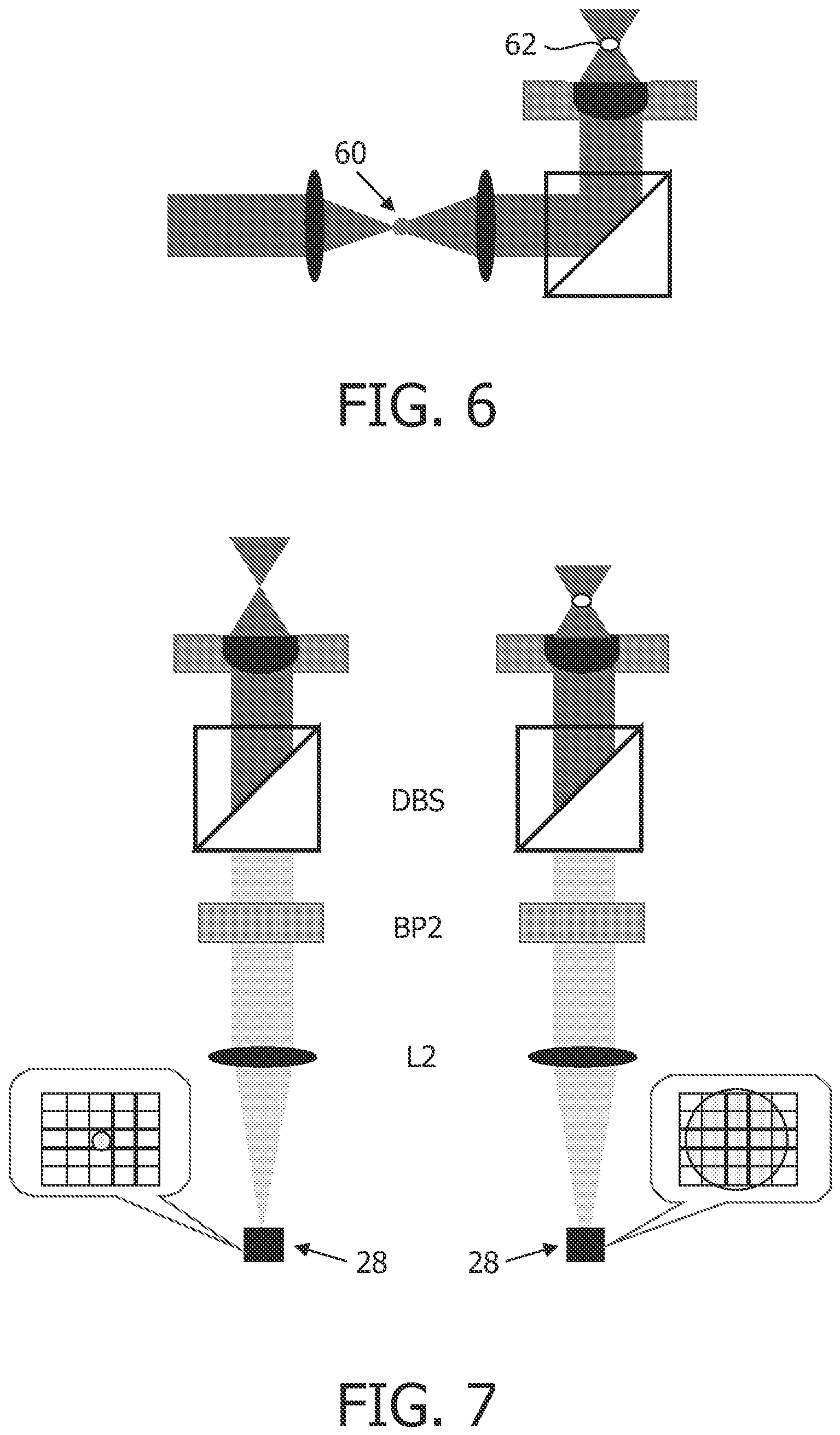 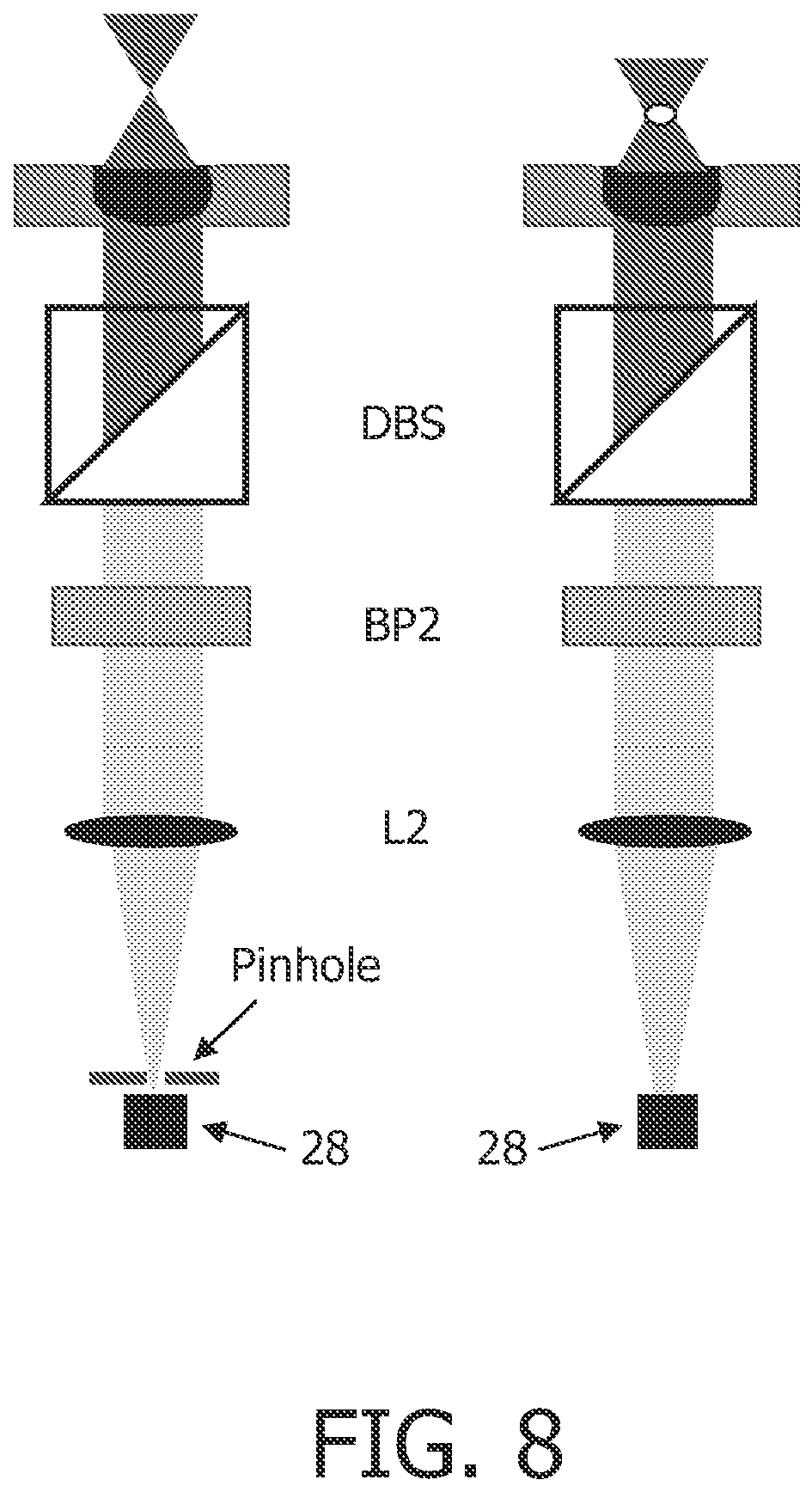