[0001] The present invention relates to a power transmission arrangement in front of a tractor, which includes a gearbox providing selective transmission ratios and to which power transmission arrangement a power take-off for an implement is attached. The invention particularly relates to an arrangement, in which there is a quick-selection gear.
[0002] Several tractor manufacturers have had a few transmission alternatives in production for a long time already. Up until now, the most typical rear transmission has been a fixed-step fully mechanical gearbox, which is coupled to the engine by a hydraulic clutch. In front, a reduction gear, with a light construction on-off switch, coupled to the end of the crankshaft by an elastic clutch. Generally, this is implemented using a electro-hydraulic plate clutch. Some manufacturers have a manually operated reversing unit (front PTO) attached to this gearbox. The driver must leave the cab to operate this lever.
[0003] In recent years, a stepless gearbox (CVT) has also been shown in connection with a power take-off (PTO). Patent publication US 6942595 discloses one such PTO system, in which there are, in addition, control means, by which the gearbox is controlled depending on the implement, as there are sensors in the implement to measure the loading parameters and it is connected by a data-transfer link (CAN BUS) to the control means. The stepless gearbox and engine are controlled in such a way that the implement always has optimal rotation speed and power. In addition, the system also prevents the overloading of the implement.
[0004] In addition to a fixed-step cylindrical gear in the driving transmission, several manufacturers have had for a long time an optional planet gearbox equipped with a multi-disc clutch, to create more gear ratios. Examples are the driving transmission packages available in Valmet and Valtra models already from 1994 (Mertz and Mega models), in which there is the said quick-selection gear and a reversing gear for the tractor, operated from the cab by a lever. Starting from 1997, a multi-disc reversing gear has been available. Some models of this type are the Valmet 600-8750 Delta Powershift and the Valtra 6250-8950 Multidisc shuttle. Other manufacturers have had similar units in different arrangements related to the driving transmission.
[0005] The present invention is intended to diversify the use of the front power take-off in a simple manner. The characteristic features of the arrangement according to the invention are stated in Claim 1. The arrangement preferably includes a reversing-gear-planet-gearbox unit, as well as a fixed gear ratio in the gearbox unit. Such a combination is surprising, as it is assembled mainly from readily available products used in a driving transmission and permits the PTO to be adapted to a few of the most used rpms. One preferred solution can be assembled using a planet gearbox used in the driving transmission and a conventional cylindrical gear used in the front PTO. The use of such a solution is supported by the fact that the planet gearbox always operates on the side of the highest rpm, so that the torques remain correspondingly lower than if the planet gearbox were to convert the number of rpms directly finally. Thus, in this combination, the size and torque of the planet gearbox can be substantially smaller than when using only a planet gearbox.
[0006] Alternatively, a stepless gearbox is equipped with a reversing unit, in which case a wider range of alternative rpms will be available. In general, the combination of a selective rpm range and reversing device controlled from the cab is central to the present invention.
[0007] In one application, the reversing and transmission ration controlled from the cab are complemented by a three-point coupling controlled from the cab. Thus, all the connections and settings relating to an implement can be made without getting out of the cab.
[0008] Other benefits and embodiments of the invention appear in connection with the application examples.
[0009] In the following, the invention is described with the aid of examples and the accompanying drawings, in which

Figure 1 shows one arrangement, according to the invention, of the front transmission of a tractor, from the engine to an implement,

Figure 2 shows an axonometric view of one arrangement of the front transmission, in connection with a three-point coupling, and

Figure 3 shows a variation of Figure 1, in which a stepless gearbox is used as the gearbox. 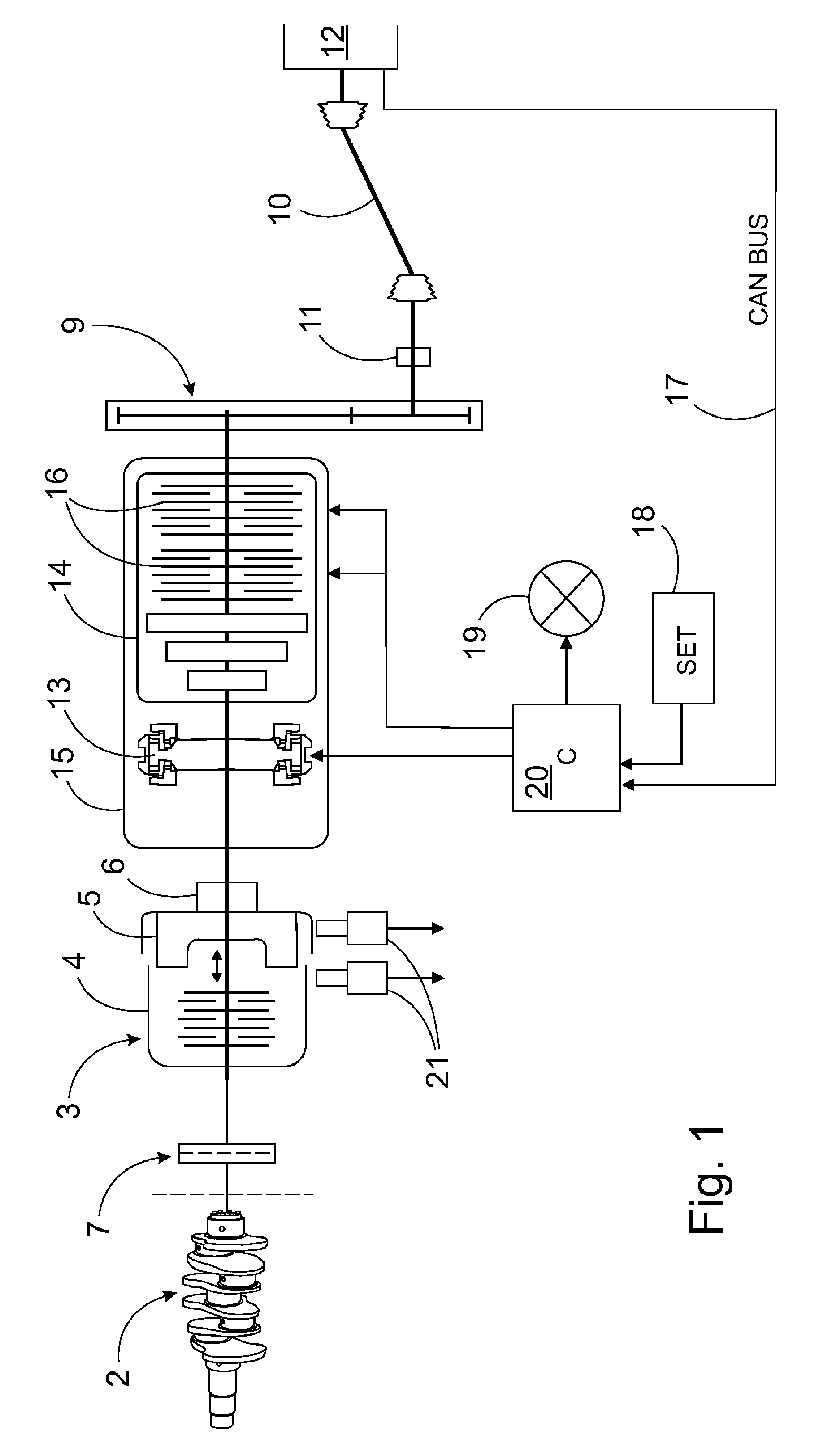 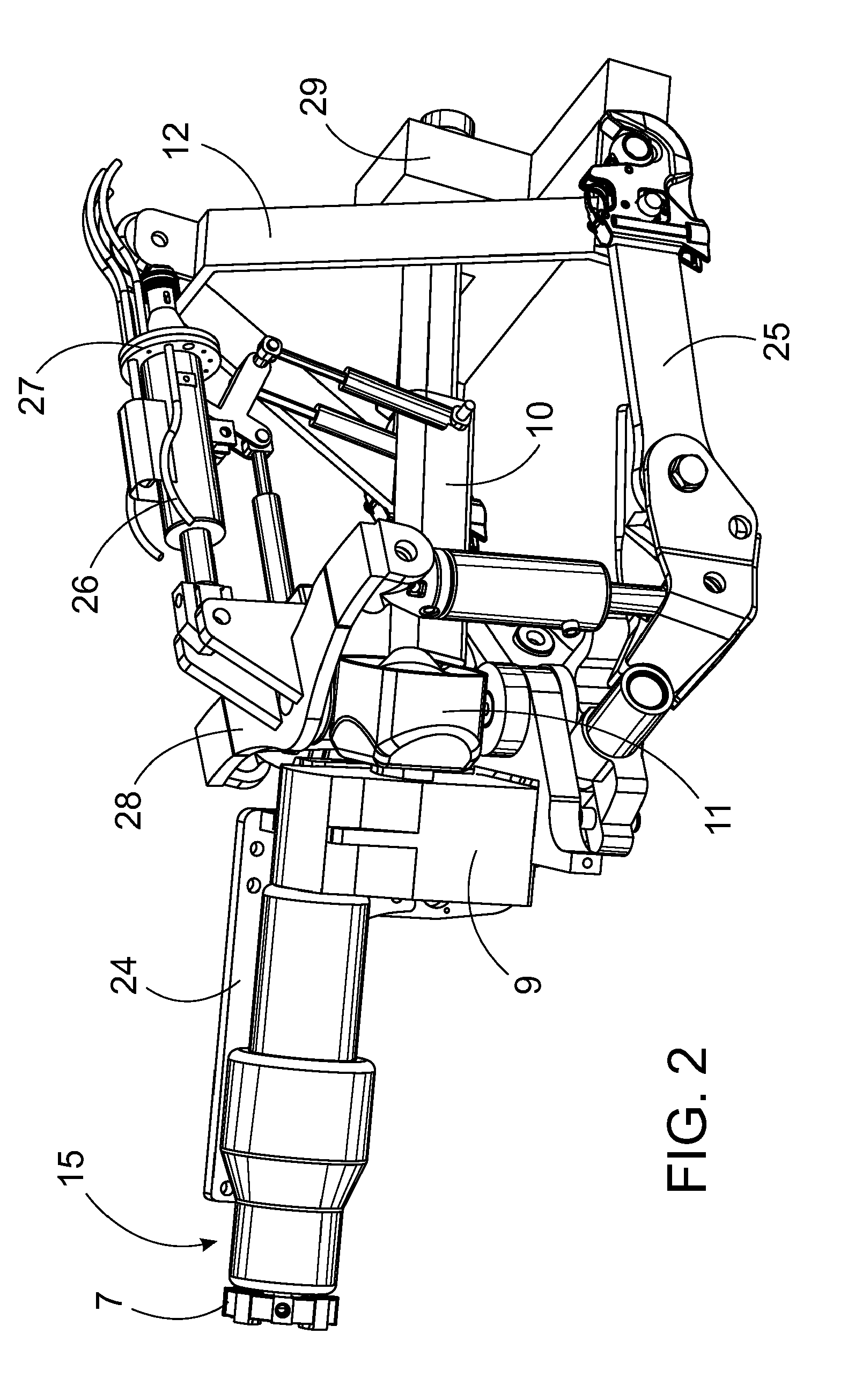 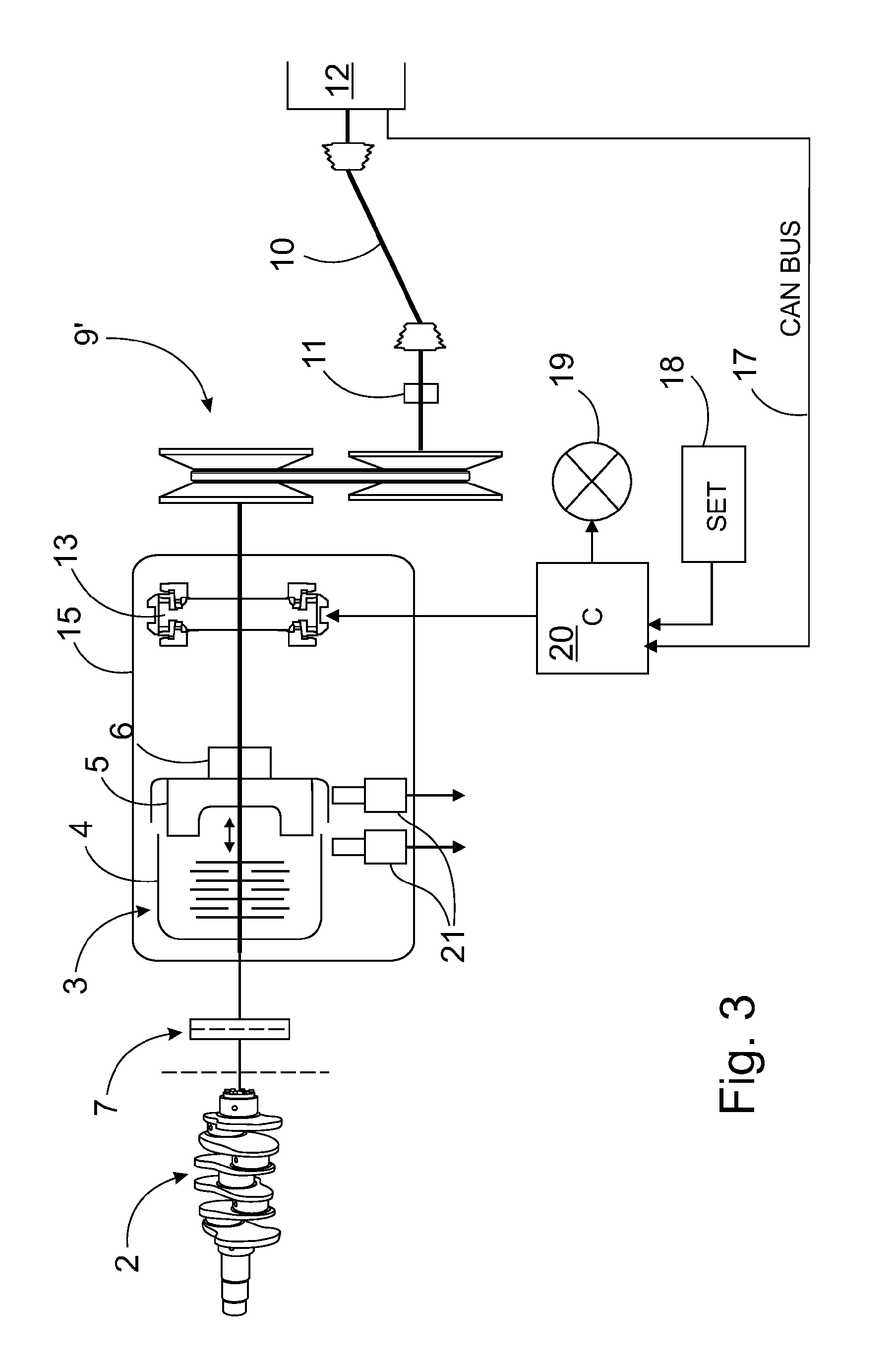