[0001] The present invention relates to a composite separation membrane which has excellent chemical resistance, separation performance, and water permeability.

Problem to be solved by the invention

[0007] Therefore, an object of the present invention is to obtain a composite separation membrane which has excellent chemical resistance and satisfies high separation performance and high water permeability.

Means for solving the problem

[0008] The present invention for solving the problem described above is achieved by the following aspects (1) to (4).

Advantageous Effect of the Invention

[0009] According to the present invention, a composite separation membrane can be provided which has excellent chemical resistance and water permeability, and the industrial improvements of reduction in running cost, reduction in cost, and energy saving are expected through the use of this membrane.

[0044] The present invention will be more specifically described below with reference to examples. However, the present invention is not to be considered limited to these examples. Special grade reagent products produced by Wako Pure Chemical Industries, Ltd. were used for the regents, unless otherwise stated.
[0045] In the following examples, the removal rate of the composite separation membrane, the permeability rate of the composite separation membrane, and the performance retention rate after immersion in chlorine are calculated respectively by the following equations (1), (2), and (3).

[0046] The porous supporting membrane reinforced with a fiber, used in the present invention, was produced in accordance with the following approach.
[0047] Taffeta (150-denier multifilament yarn for both warp yarn and weft yarn, weaving density: 90 yarns/inch in the length direction and 67 yarns/inch, thickness: 160µm) composed of a 30 cm long × 20 cm wide polyester fiber was fixed to a glass plate, and a 15 weight% dimethylformamide solution of polysulfone (Udel (Registered Trademark) produced by Amoco, P-3500) was casted thereon at room temperature (25°C) to provide a thickness of 200 µm, immediately followed by immersion in pure water and leaving as it was for 5 minutes, thereby obtaining a porous supporting membrane. The pure water permeation coefficient of the thus obtained porous supporting membrane was 0.005 to 0.01 kg/cm2/sec/atm (about 0.001 to 0.002 g/cm2/sec/MPa), which was measured at a pressure of 0.1 MPa and a temperature of 25°C. In addition, the average pore size at the surface of the obtained porous supporting membrane was 20 to 50 nm, and the thickness of the polysulfone moiety thereof was 50 µm.

[0050] To the porous supporting membrane produced in accordance with Reference Example 1, 1.0 weight% of piperazine, 0.2 weight% of 1,3-di(4-piperidyl)propane, 0.5 weight% of sodium alkyl diphenyl ether disulfonate, and 1.0 weight% of trisodium phosphate were applied, followed by drying carried out with hot air at 70°C for 1 minute. Then, an n-decane solution containing 0.4 weight% of isophthalic chloride and 0.1 weight% of trimesic chloride was applied, followed by a treatment carried out with hot air at 100°C for 5 minutes. Then, immersion in a 100 ppm chlorine solution adjusted to pH 7 was further carried out for 2minutes, followed by washing with pure water. The thus obtained composite separation membrane was evaluated in the same way as in Example 1 to obtain the performance shown in Table 1.

(In the formula, R1 includes a polymerizable reactive moiety; R2 represents a hydrogen atom or an alkyl group, which may be substituted with a substituent; and n and m each represent an integer satisfying n ≥ 2 and m ≥ 0, with n + m being 8, 10 or 12.)

2. The composite separation membrane according to claim 1, wherein the porous supporting membrane has an average pore size of 1 to 100 nm.

3. The composite separation membrane according to claim 1, wherein the separation function layer has a thickness of 500 nm or less.

4. The composite separation membrane according to claim 1, wherein the hydrophilic monomer is an acid monomer. 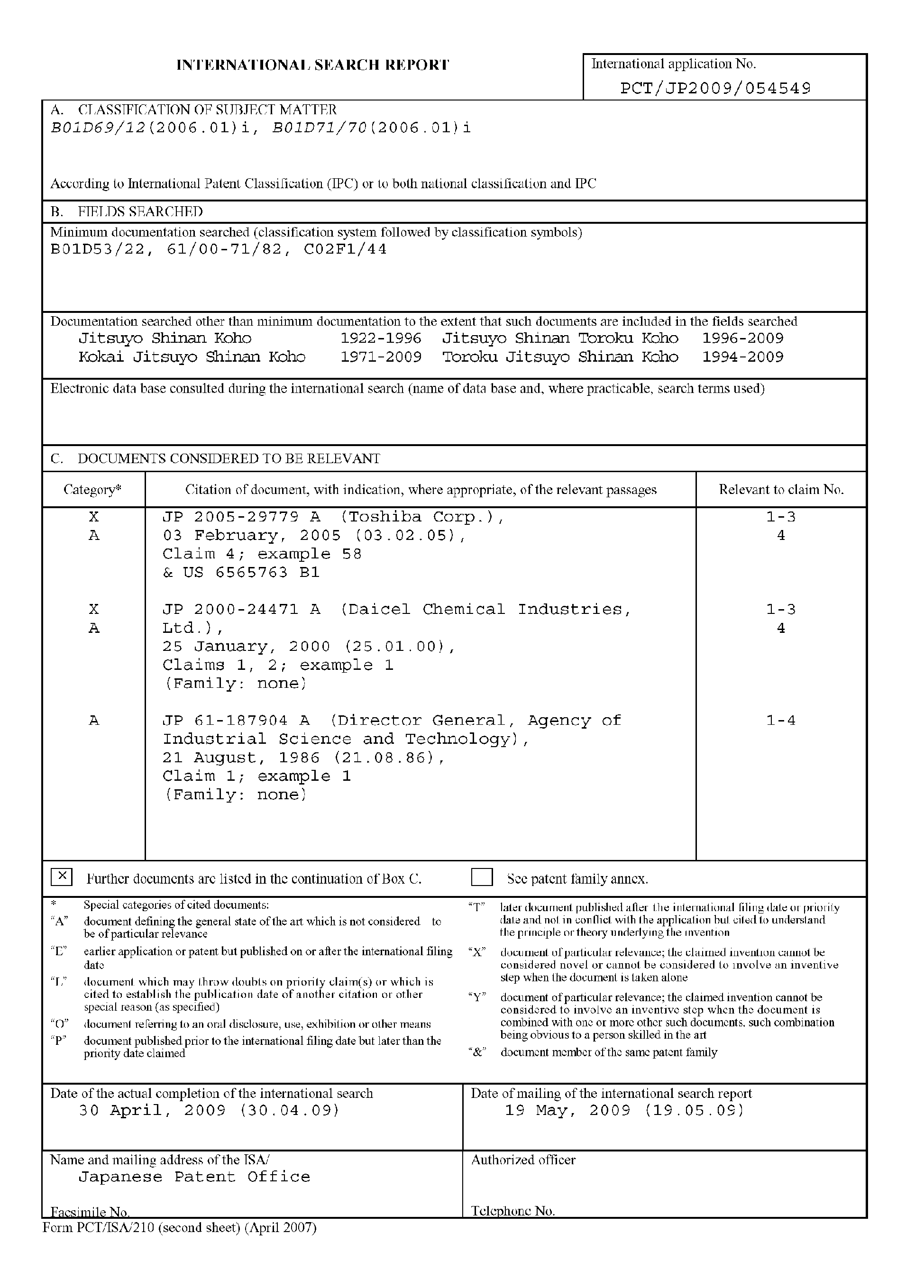 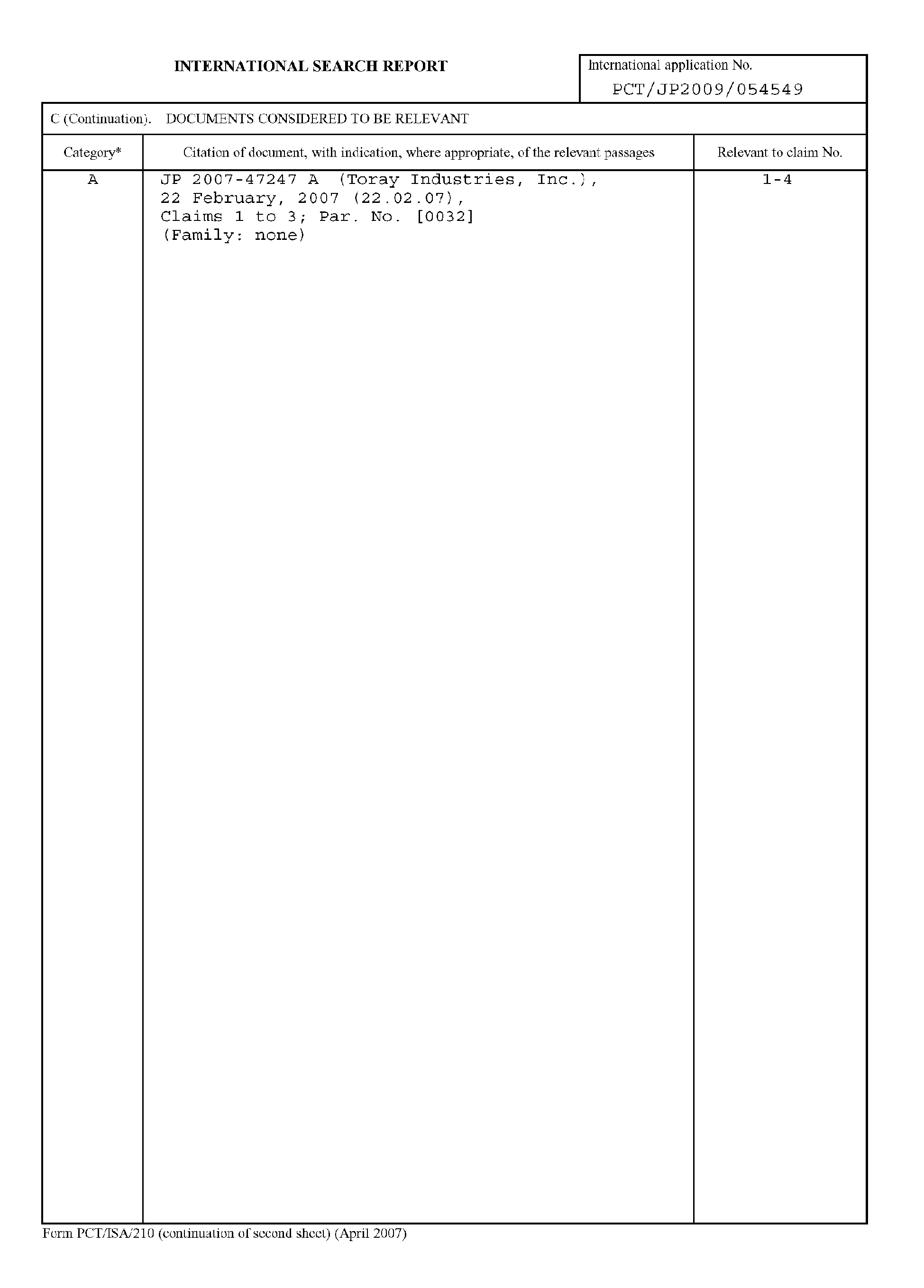