[0001] The present invention relates generally to motion sensing devices, and more specifically to interfacing application programs to motion sensors of a device.

[0002] Motion sensors, such as accelerometers or gyroscopes, are often used in electronic devices. Accelerometers can be used for measuring linear acceleration and gyroscopes can be used for measuring angular velocity. The markets for motion sensors include mobile phones, video game controllers, PDAs, mobile internet devices (MIDs), personal navigational devices (PNDs), digital still cameras, digital video cameras, and many more. For example, cell phones may use accelerometers to detect the tilt of the device in space, which allows a video picture to be displayed in an orientation corresponding to the tilt. Video game console controllers may use accelerometers and/or gyroscopes to detect motion of the hand controller that is used to provide input to a game. Picture and video stabilization is an important feature in even low- or mid-end digital cameras, where lens or image sensors are shifted to compensate for hand jittering measured by a gyroscope. Global positioning system (GPS) and location base service (LBS) applications rely on determining an accurate location of the device, and motion sensors are often needed when a GPS signal is attenuated or unavailable, or to enhance the accuracy of GPS location finding.
[0003] Most existing electronic devices tend to use only the very basic of motion sensors, such as an accelerometer with "peak detection" or steady state measurements. For example, current mobile phones use an accelerometer to determine tilting of the device, which can be determined using a steady state gravity measurement. Such simple determination cannot be used in more sophisticated applications using, for example, gyroscopes or other applications having precise timing requirements. Without a gyroscope included in the device, the tilting and acceleration of the device is not sensed reliably. This is often misleading in non-gyroscope navigational devices; for example, a "non-gyroscope" dead reckoning feature can misjudge automobile location for several blocks while the automobile is stopped at a sloped traffic light. And since motion of the device is not always linear or parallel to the ground, measurement of several different axes of motion using an accelerometer or gyroscope is required for greater accuracy.
[0004] More sophisticated motion sensors typically are not used in electronic devices. For example, image stabilization and dead reckoning features are both important features for a mobile phone with GPS or a higher-resolution camera, but there is no available solution in the current mobile phone market. Some attempts have been made for more sophisticated motion sensors in particular applications, such as detecting motion with certain movements. But most of these efforts have failed or are not robust enough as a product. This is because the use of motion sensors to derive motion is complicated. For example, when using a gyroscope, it is not trivial to identify the tilting or movement of a device. Using motion sensors for image stabilization, for sensing location, or for other sophisticated applications, requires in-depth understanding of motion sensors, which makes motion sensing design very difficult.
[0005] The difficulty of motion sensing design also causes difficulty in porting a design from one system to another system. Most raw data from motion sensors is gathered and processed at the level of the application software running on the device, which does not allow for other applications to utilize the same sensor output. Furthermore, motion sensing design is typically very system dependent and intended for one specific application, which prevents it from being ported to other systems. For example, image stabilization software is typically very dependent on the particular hardware of the digital camera in which it is used, such as the available picture resolution and range of zoom.
[0006] Accordingly, a system and method that provides a simple application interface (API) to be available for different applications, allowing motion sensor data collection to be more easily defined and used by the user, and allow easier porting and maintenance of a motion sensing design for different hardware requirements, would be desirable in many applications.
[0007] US 2005/0212760 discloses a motion controlled handheld device including a display having a viewable surface and operable to generate an image and a gesture database maintaining a plurality of gestures. Each gesture is defined by a motion of the device with respect to a first position of the device. The gestures comprise symbol gestures each corresponding to a character from a preexisting character set. US2007239399 discloses a sensor interface for a handheld mobile device that receive data requests from clients and a processor that satisfies data requests using sensor data received by the sensor inputs from the physical sensors.

Figure 1 is a block diagram of a motion sensing device suitable for use with the present invention;

Figure 2 is a block diagram of one embodiment of a motion processing unit suitable for use with the present invention;

Figure 3 is a block diagram illustrating an example of a software hierarchy of the present invention;

Figure 4 is a block diagram illustrating examples of software layers of Fig. 3 running on an application processor;

Figure 5 is a flow diagram illustrating a method of the present invention of an application program accessing an API implemented on the motion sensing device;

Figure 6 is a flow diagram illustrating a method of the present invention of an API interfacing with other software layers implemented on the motion sensing device;

Figure 7 is a flow diagram illustrating a method of the present invention for simultaneously processing data for different applications concurrently running on the motion sensor device;

Figures 8A-8D are flow diagrams illustrating methods of the present invention for providing buffering to reduce processing of the application processor in receiving motion sensor output.

storing the motion sensor data in a buffer;

turning off the operation or sensing function of the motion sensors or particular axes thereof that are not being used for any currently-running application.

2. The method of claim 1 wherein the buffer is a hardware buffer (42) implemented in a motion processing unit (20) separate from an application processor (12). 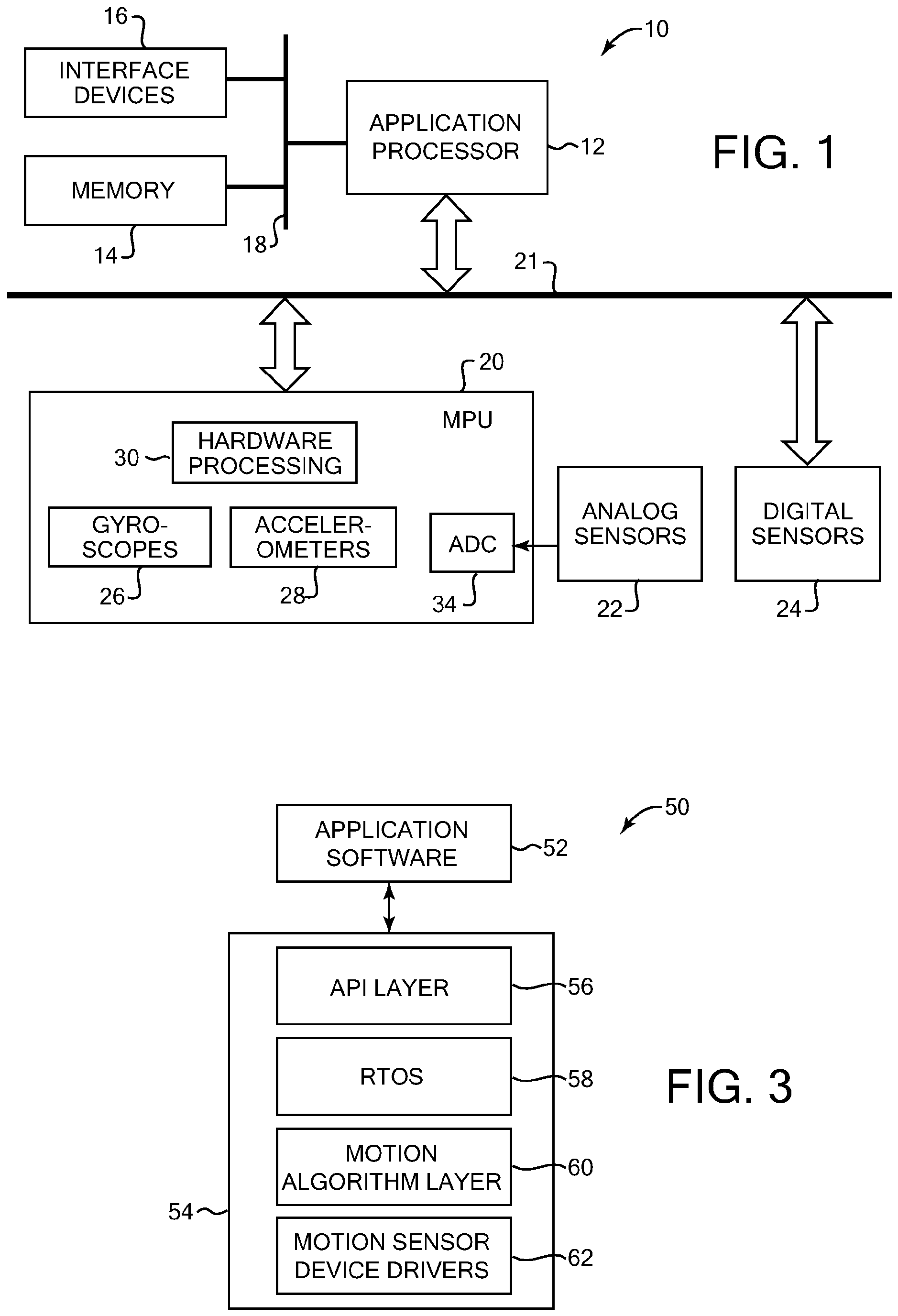 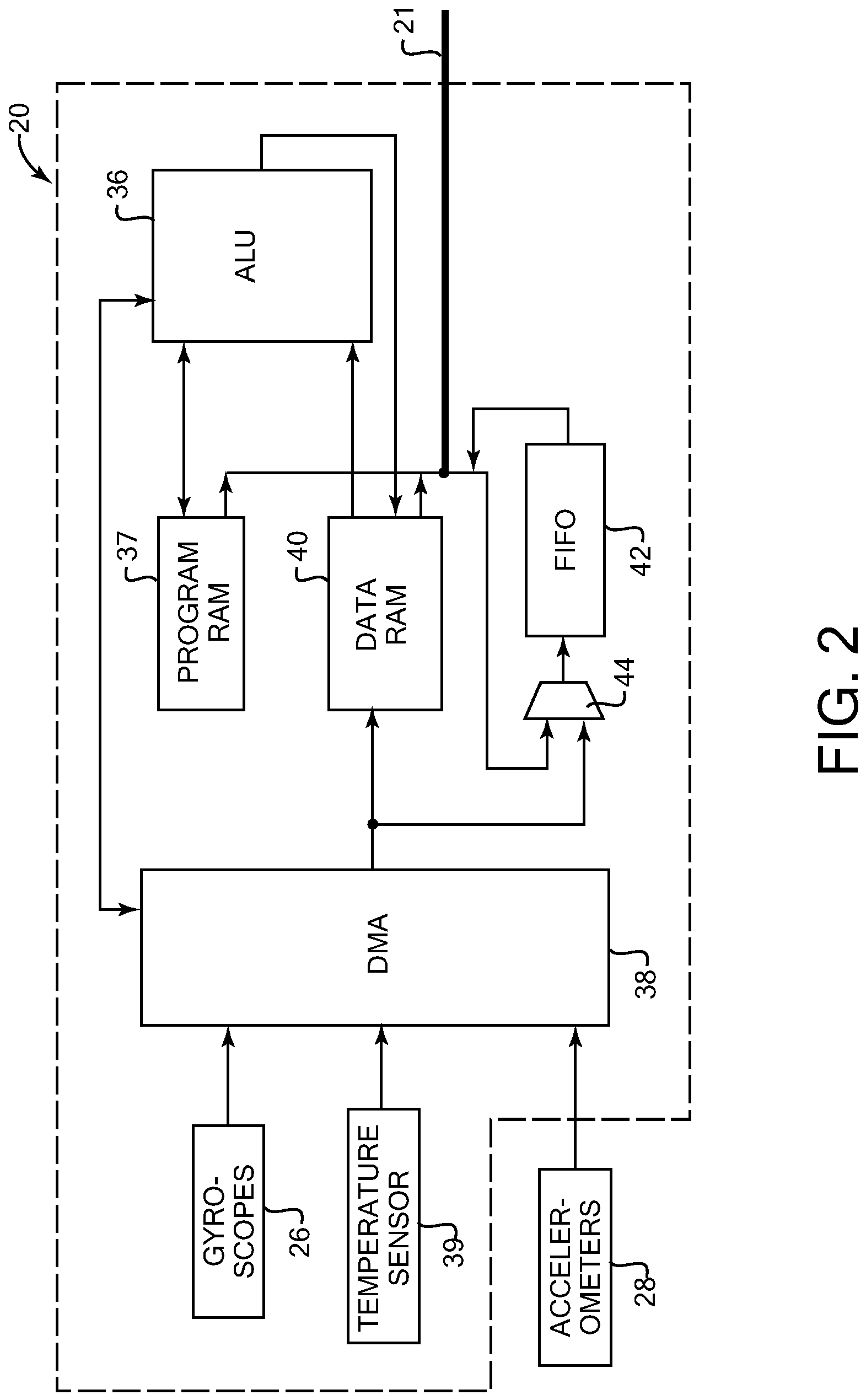 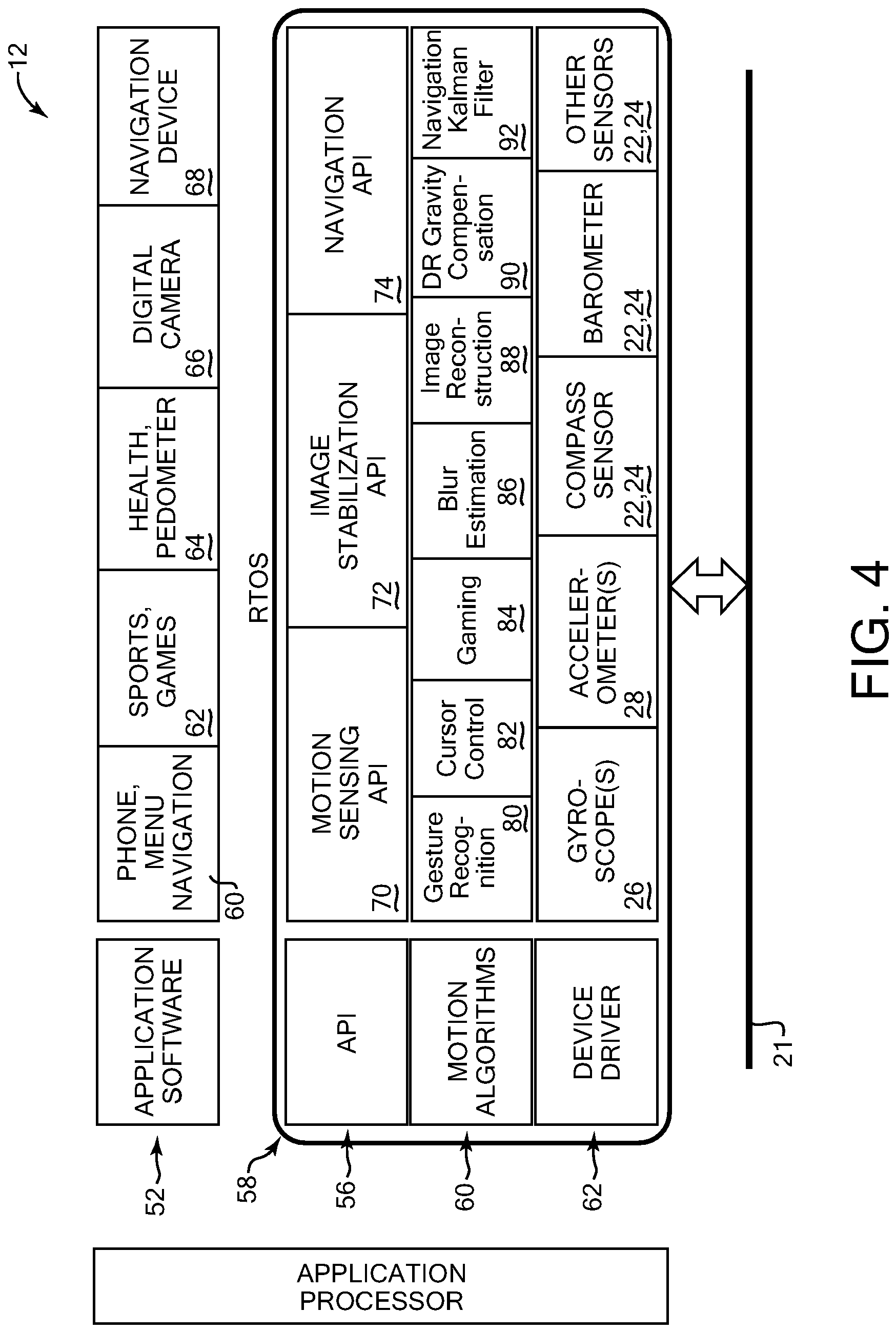 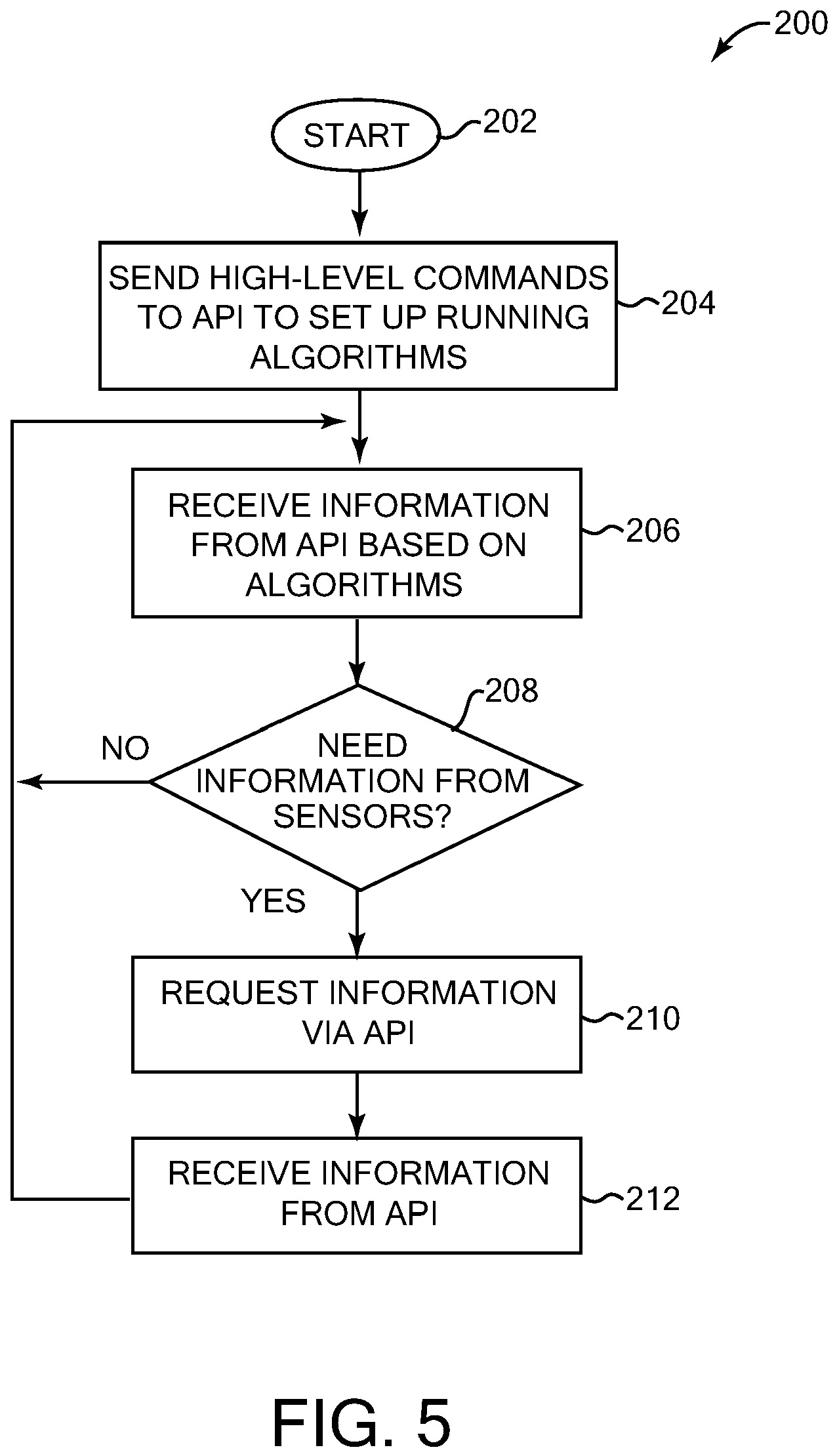 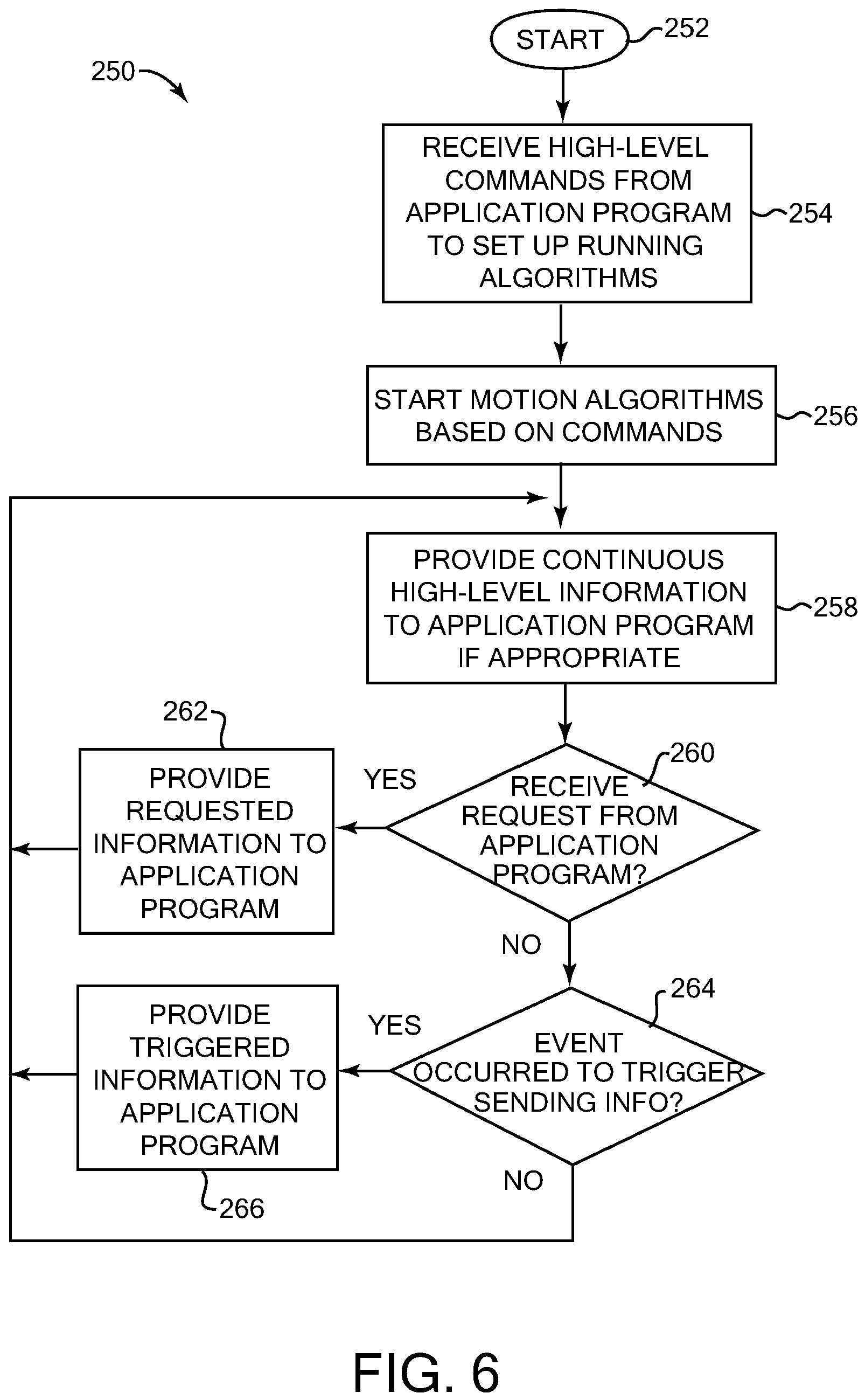 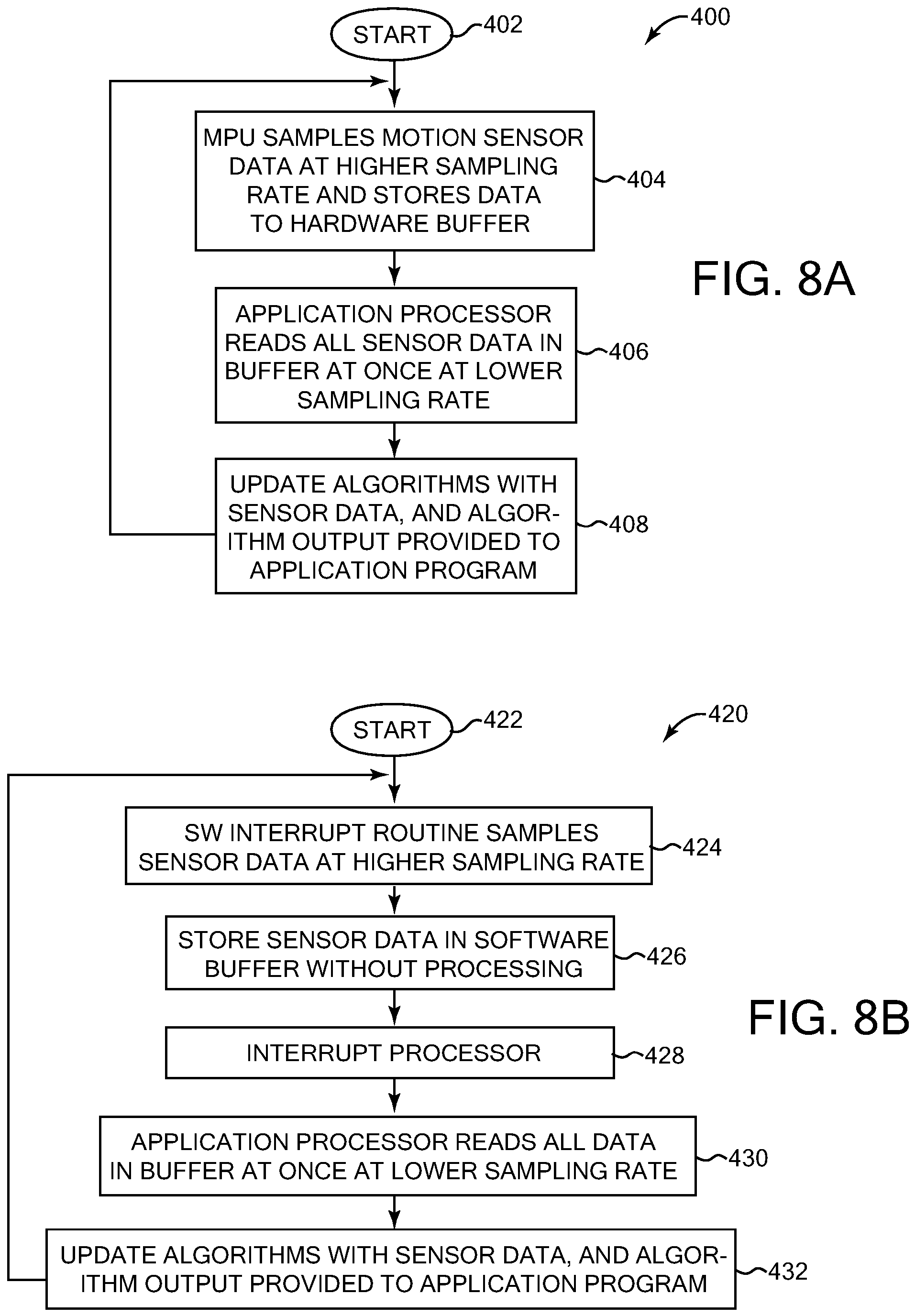 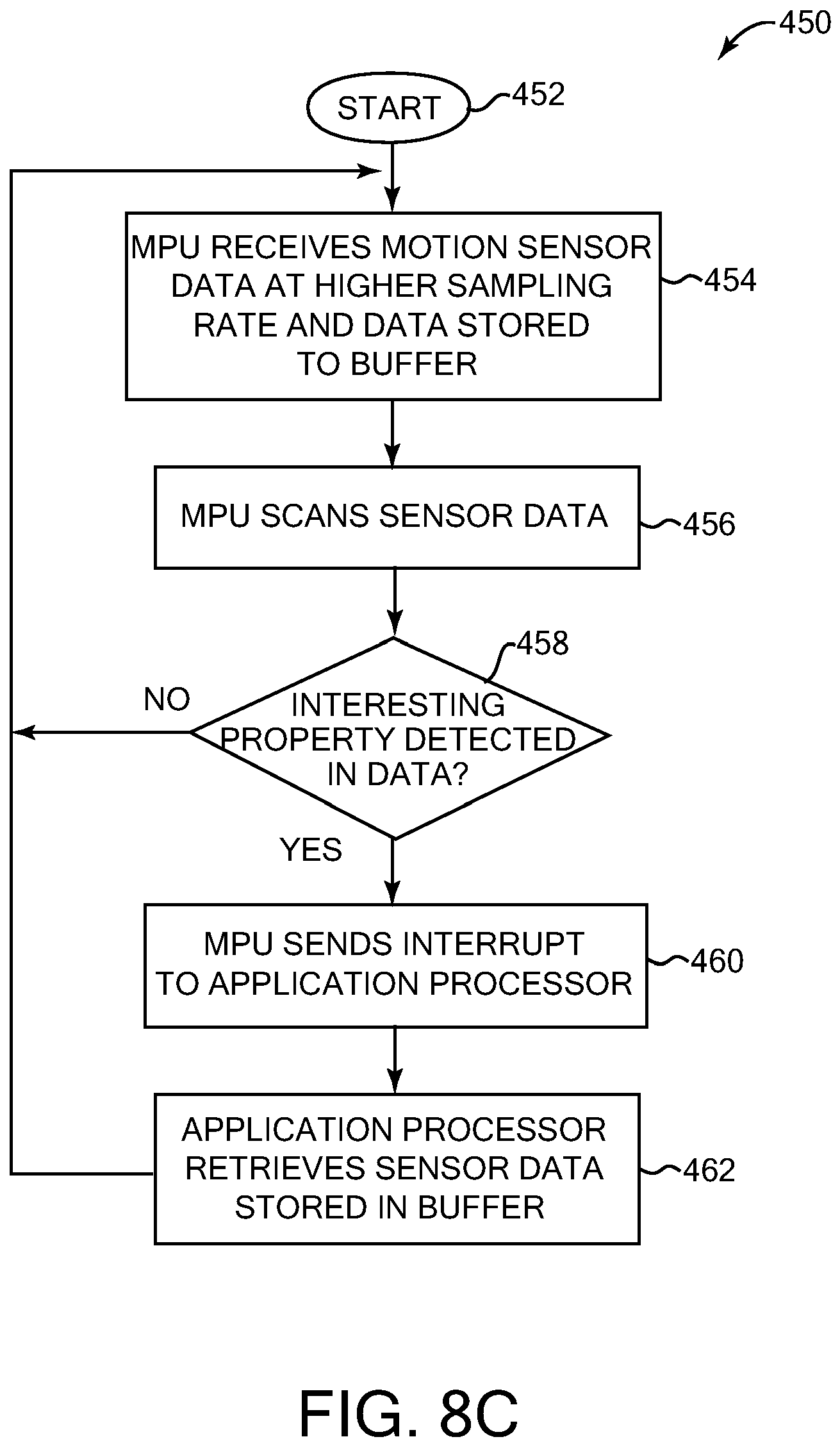 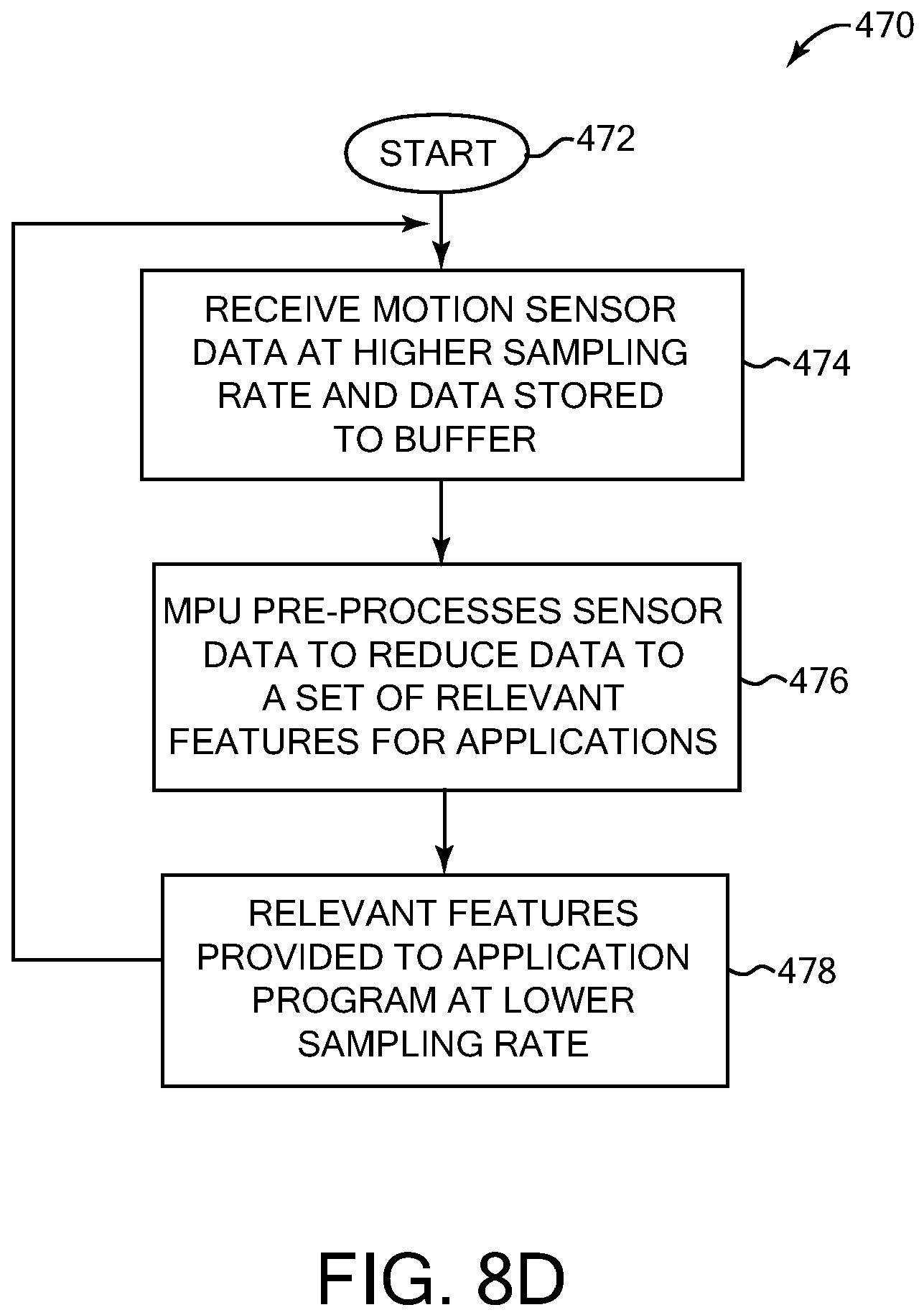