[0001] The present invention relates to a method for manufacturing a part of a wind power plant, where a number of different material layers including at least one layer of gelcoat are applied in a mould, and where resin is applied for joining of the layers and with the purpose of obtaining self-regenerating self-cleaning properties of the composite.

[0002] Components made of composite materials play an increasing role in everyday life and are increasingly used for structural components, where the possibility of obtaining parts with high stiffness and strength properties yet low weight are important or advantageous. Thus, composite structures are used more and more in the manufacture of parts and finished goods in various industries such as in the wind turbine, automotive, trucking, aerospace, marine, rail, appliance, container, construction, anti-corrosion, electrical and medical industries as well as in athletic equipments, recreation vehicles and such.
[0003] For most components, the properties of the surfaces play an important role such as for instance high resistance to UV-light, hardness, low friction coefficients in specific areas, surfaces that are easy to repair without visual impair, and low or high reflection coefficients etc. depending on the specific requirements and use of the component in question.
[0004] Hydrophobic properties are very advantageous especially in many outdoor applications in yielding a self-cleaning and dirt-repelling effect as small particles, contaminants and insects etc are more easily washed off with the water being repelled from the hydrophobic surface due to its low surface energy. A similar self-cleaning effect is obtained on surfaces with the so-called lotus effect characterized by small elevations and depressions, or a very porous surface structure in the micro- and/or nano-scale containing trapped air. Such surfaces are also advantageous in reducing the noise, e.g. arising from the blades on a wind turbine, in use and in reducing the drag from a surrounding fluid. Such surfaces and methods for their manufacture are described in EP1141543, EP0772514, DE102004037812 and US7258731 among others. A significant disadvantage with the described self-cleaning surfaces is, however, that the self-cleaning and dirt-repelling effect is prone to be worn off after a relatively short period of time of course depending on how the component in consideration is used. The surface properties will then have to be renewed for instance by spraying, painting or in another way applying a new coating. This is in many applications a very impractical or perhaps even impossible procedure to perform and is in all cases both very time-consuming and costly.
[0005] EP1283076 describes a method of obtaining a hydrophobic surface structure which is at least partly self-regenerating. The surface is formed by securing particles on and in a carrier layer. When the carrier layer and the particles on the surface along with it are worn off, new particles are gradually exposed regenerating the surface properties. The coating is applied by spray, brush, a jet or the like which, however, is disadvantageous for a number of applications as only a relatively thin layer thickness can be obtained by these methods as the layer otherwise has a tendency to become wrinkled and uneven and the strength of the layer will be limited. Alternatively, in order to obtain a thicker surface layer of a higher strength, the coating must be applied by a number of thin layer applications which then render the manufacturing method time-consuming and uneconomical.
[0006] WO-A-2005/030893 discloses the features of the respective preambles of claims 1, 9 and 11.

OBJECT AND SUMMARY OF THE INVENTION

[0007] It is therefore an object of the present invention to provide an alternative method of producing a part of a wind power plant with regenerating self-cleaning surfaces solving or at least partly overcoming the problems mentioned above.
[0008] According to one aspect the present invention relates to a method for manufacturing a part of a wind power plant as defined in claim 1.
[0009] Due to the particles in the gelcoat of which some will protrude from the finished gelcoated composite surface is hereby obtained a composite member with a hydrophobic surface and lotus effect properties. The surface thereby becomes self-cleaning in that water droplets will repel from the surface, roll off very easily taking with them dirt particles, organic impurities etc. A lotus-like surface according to the effect is also advantageous in decreasing the noise emitted from composite components such as rotating blades on a wind power plant or the like. Furthermore, surfaces with lotus-effect properties are advantageous in lowering the fluid resistance (the drag).
[0010] The method according to the invention is furthermore advantageous in resulting in self-cleaning surface properties that are self-regenerating because new particles become naturally and automatically exposed if the surface for some reason is worn, frayed or damaged. The advantageous surface properties may also simply and easily be renewed by grinding or polishing the surface or parts of the surface to the extent needed to expose new particles.
[0011] Compared to prior art methods of spraying or painting on hydrophobic coatings, the proposed method is advantageous in being very time-saving as the process step of spraying or painting is completely avoided. The method therefore represents great savings on material and is far more inexpensive. Also, no extra or new process steps or time are added in the manufacture and production which therefore is straight forward to implement and highly cost effective. Furthermore, adding the particles to the gelcoat is advantageous as thicker layer(s) hereby can be obtained compared to when a coating or paint is to be sprayed or painted onto a demoulded component, where only thin layers can be applied at a time. This in turn implies that a gelcoated composite manufactured according to the invention can possibly be worn or grinded down over a longer time (as the surface layer is thicker) and that the life time of the component becomes correspondingly longer.
[0012] In an embodiment, said manufacturing method further comprises abrading at least a part of the composite member thereby at least partly exposing some of said particles. This is advantageous in enhancing the hydrophobic properties and lotus effect of the surface in a very simple and fast manner. The abrading can be done for instance by polishing, sand blasting, grinding, etc.
[0013] In a further embodiment, the adding of particles is done after and/or prior to the application of gelcoat in the mould.
[0014] In an embodiment, the manufacturing method further comprises applying a thin layer e.g. by spraying of at least a part of the surface with a fluorous compound, thus in a simple way improving the hydrophobic properties of the surface further.
[0015] In a further embodiment, at least one material layer of the component is of a fibre reinforced material and/or a plastic foam material.
[0016] In yet a further embodiment, the method according to the above is a vacuum forming process, which is a very common and effective method for the production of composite components of various sorts.
[0017] In an embodiment the particles in the composite member according to the above are of one or more materials belonging to the group of TiO2, Al2O3, SiO2 and ZrO2. These materials are all advantageous in resulting in surfaces with the previously described hydrophobic and lotus-like properties. Particles of TiO2 are further advantageous in that organic impurities, dirt and grease are decomposed or broken down when the TiO2-particles are subjected to UV light from e.g. the sun. Thereby the dirt can more easily be washed off or swept away by fluids such as e.g. rain.
[0018] A part of a wind power plant according to the above comprises surface areas both with and without the at least partly exposed particles. Hereby is obtained that the particles can be added in the regions where the self-cleaning properties are advantageous. Furthermore, the surface hereby obtains ice repellant properties in that the exposed particles act as seeds where snow flakes and ice crystals will initiate and grow but then eventually fall off before a covering ice sheet is formed due to the surrounding particle-free areas.
[0019] Said surface areas are arranged in a pattern.
[0020] In a preferred embodiment a gelcoat comprising particles of e.g. TiO2, Al2O3, SiO2 and/or ZrO2 is used for giving regenerating self-cleaning properties. This is advantageous for the same reasons as mentioned previously in relation to the method and the composite member.

[0021] In the following, preferred embodiments of the invention will be described referring to the figures, where

figure 1 shows the manufacture of a composite member as known in the art,

figure 2 shows the manufacture of a composite member with the use of a gelcoat comprising particles according to one embodiment of the invention and with a close-up of the gelcoat layer,

figure 3 illustrates the regenerating surface with self cleaning properties of a composite member,

figure 4 shows a blade for a wind power plant manufactured according to the present invention and with a close-up of the surface, and

figure 5 illustrates a composite member and a close-up of its surface with particles partially exposed and arranged in a pattern.

1. A method for manufacturing a part of a wind power plant such as a blade or a nacelle comprising a composite member (101), wherein the method comprises applying different material layers comprising at least one layer of gelcoat (104) in a mould (103), and wherein resin is applied for joining of the layers, wherein the method is characterized in that it comprises the steps of:

2. A method according to claim 1 further comprising abrading at least a part of the composite member (101) thereby at least partly exposing some of said particles (201).

5. A method according to any of claims 1-4 further comprising applying a thin layer e.g. by spraying of at least a part of the surface with a fluorous compound.

6. A method according to any of claims 1-5, wherein at least one material layer is of a fibre reinforced material.

7. A method according to any of claims 1-6, wherein at least one material layer is of a plastic foam material.

8. A method according to any of claims 1-7, wherein the method is a vacuum forming process.

9. A part for a wind power plant such as e.g. a blade or a nacelle comprising a composite member (101) comprising an outermost layer of gelcoat (104), wherein the outermost layer comprises a number of at least partly exposed particles (201), characterized in that the composite member (101) comprises surface areas both with and without said at least partly exposed particles (201) and in that said surface areas are arranged in a pattern.

11. Use of a gelcoat (104) for a part for a wind power plant, such as e.g. a blade or a nacelle, characterized in that the gelcoat comprises particles (201) of e.g. TiO2, Al2O3, SiO2 and/or ZrO2 arranged in a pattern for giving regenerating self-cleaning properties and preventing build-up of ice and/or snow. 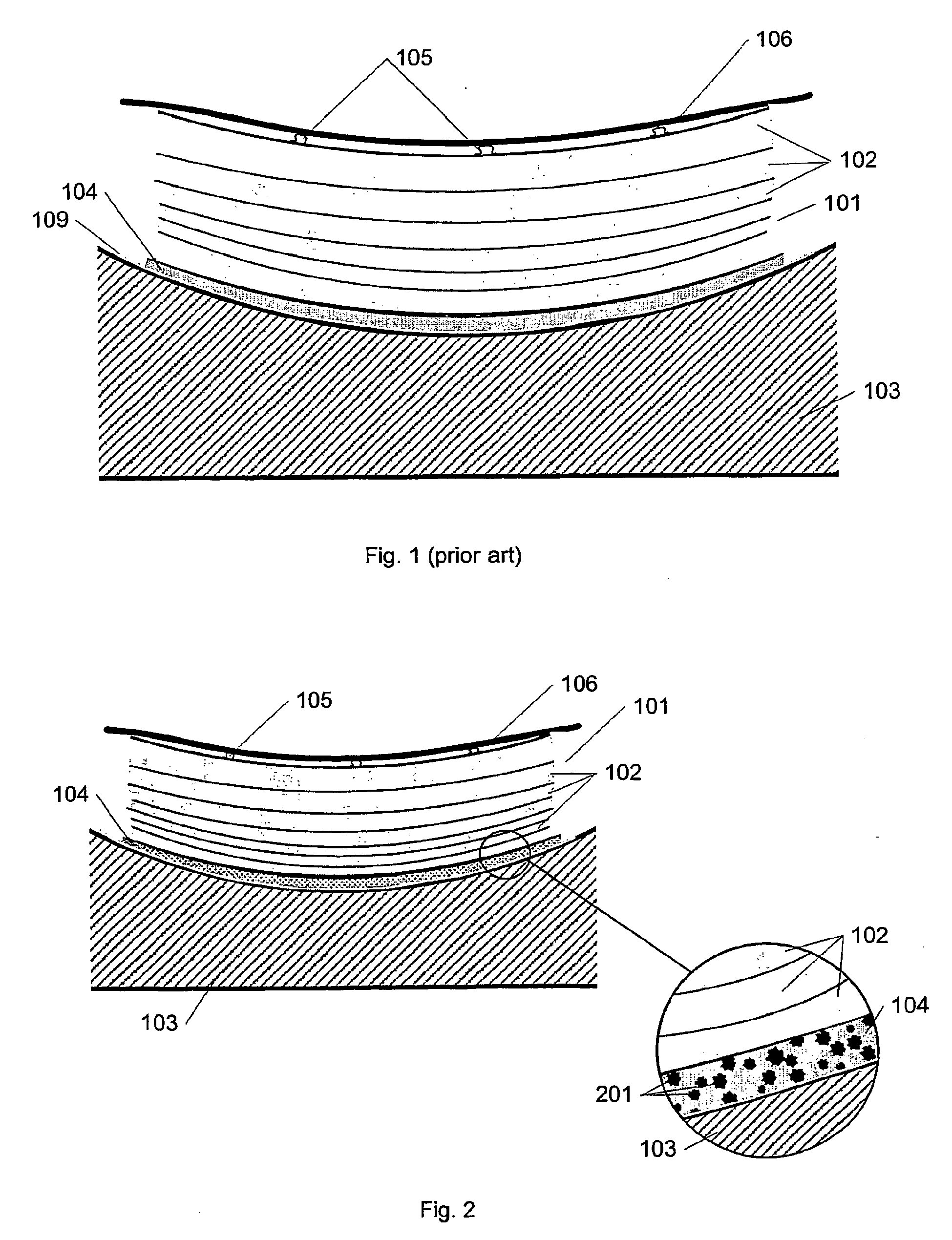 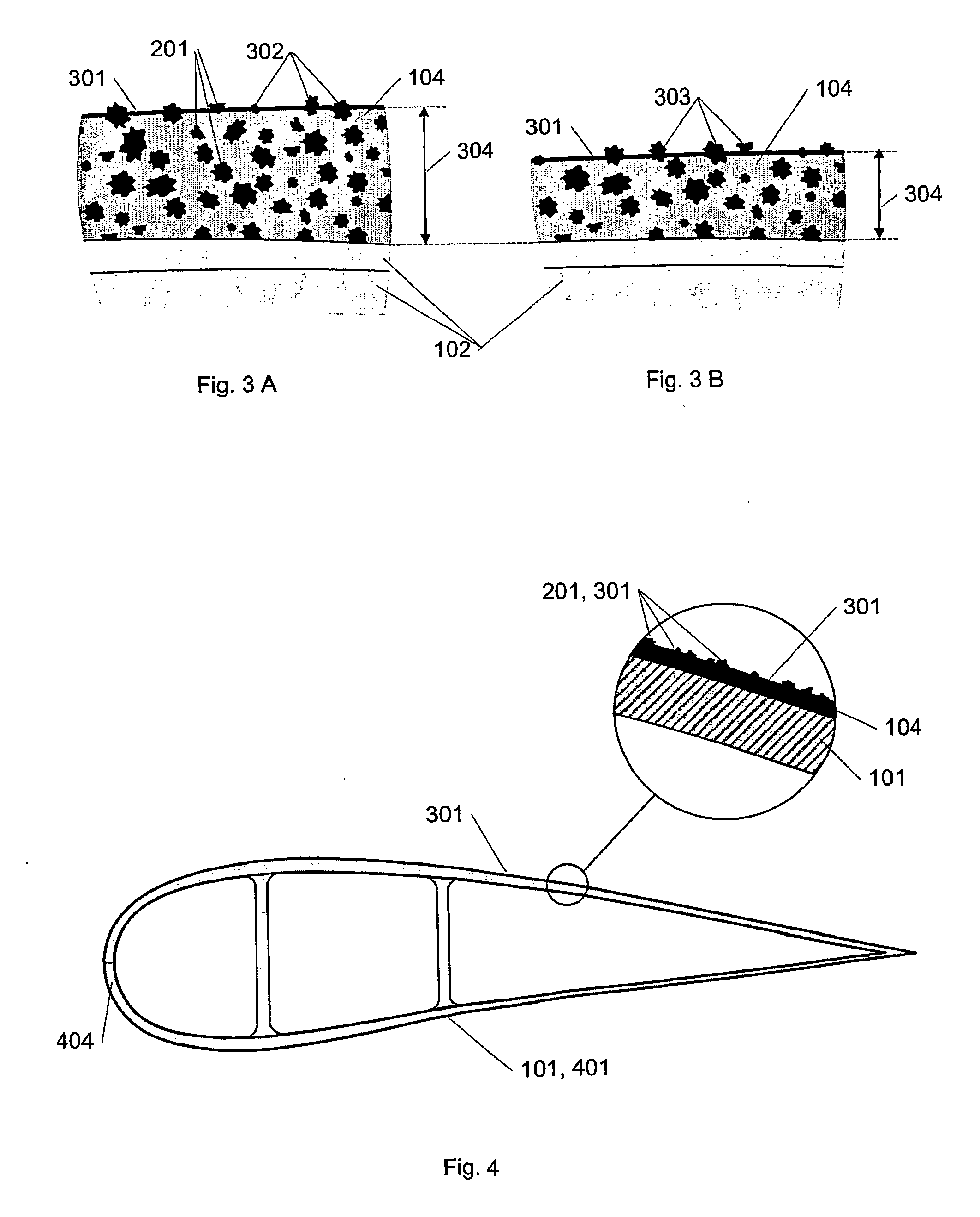 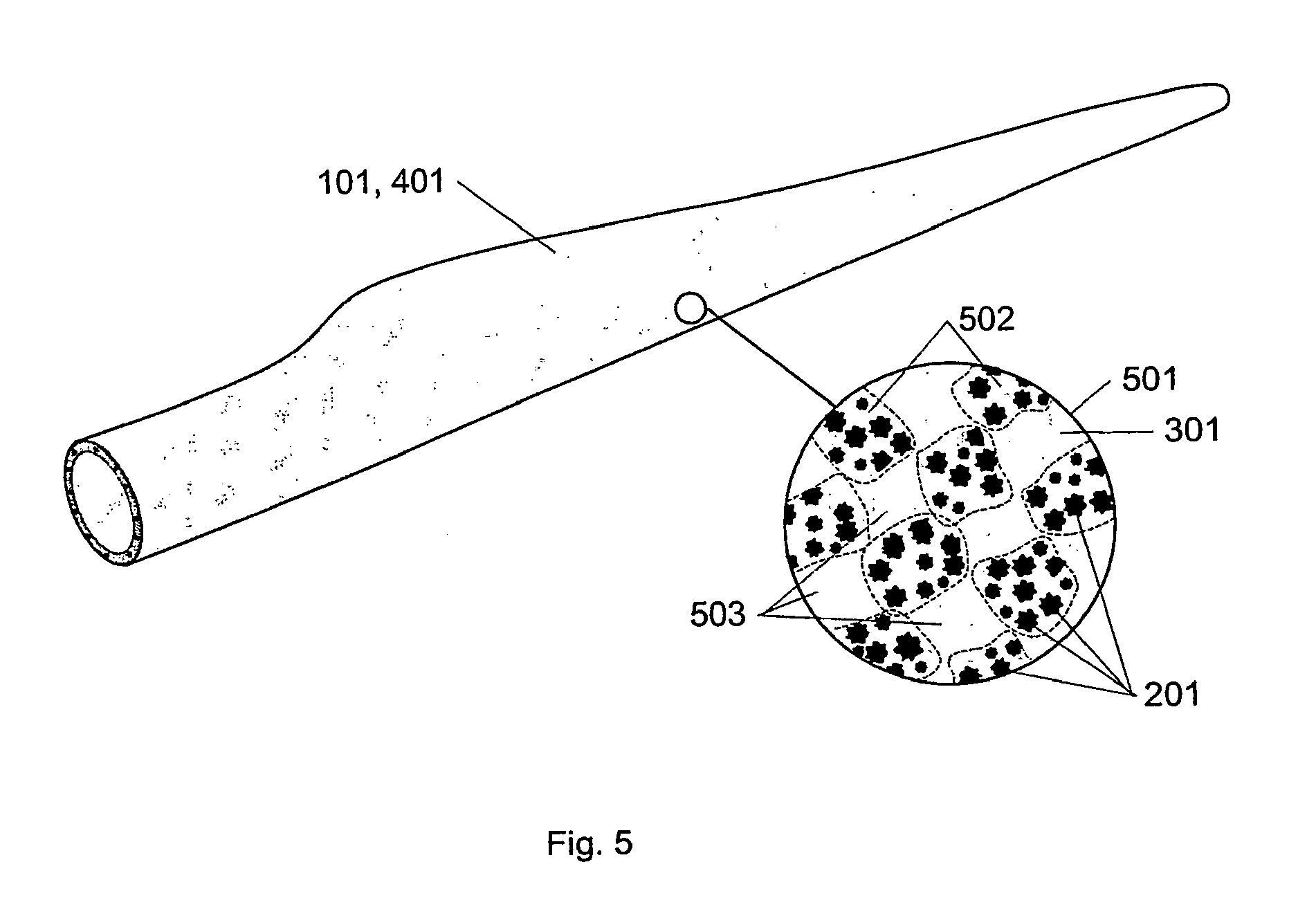