[0001] This invention is related to pulsed laser deposition (PLD) using a pulsed laser to fabricate thin-film materials on a substrate.

FIG. 1 schematically illustrates several elements of a pulsed laser deposition system. The system includes a vacuum chamber (and related pumps, not shown in the figure), a target manipulator, an ion probe (Langmuir probe), a gas inlet, and a substrate manipulator. The laser beam is focused onto the target surface through a fused silica window.

FIG. 2 is a schematic illustration of laser pulses in a "burst mode". Each burst contains a group of closely separately pulses. The width of the burst is adjustable so that the bursts can contain a variable number of pulses. For a typical pulse amplification system, the 'base' repetition rate, i.e., the repetition rate of the pulses within the bursts is determined by the oscillator repetition rate, which is possible to change. The burst repetition rate and width are adjusted by, selecting pulses with an optical switch, for example an acousto-optical modulator (AOM) shown in FIGs 1A or 1C.

FIGS. 7 illustrate another example of burst mode processing, wherein a TiO2 sample is ablated with femtosecond pulses. The pulse sequences of three distinct burst-modes are schematically illustrated on the left portion of the figure (FIGS. A-C). Corresponding SEMs are shown the right (FIGS. D-F).

FIG. 8 is a plot illustrating an example of time-resolved plume ion currents obtained with 1-5 pulse ablation of TiO2. The pulse energies were all 3µJ. Ion current was measured with a Langmuir probe that was negatively biased (-50 V) and positioned 1 cm away from the target.

Example of size control of nanoparticles

[0062] Figure 4 shows several SEM images of TiO2 thin films fabricated by PLD using an ultrashort laser at an ambient oxygen pressure (1x10-2 mbar) and corresponding schematics of the laser pulse profile. As clearly shown in Fig 4(a) - 4(c), the size of particles in the film decreases as the number of pulses in a laser burst increases. It is difficult to find particles in the film deposited with the 19-pulse burst mode PLD at high magnification, as particularly illustrated in FIGS. 4(c) and (d). A dust particle disposed at the surface, not a product of the PLD process, is the only structure visible in the SEM image. This surprising result further suggests that burst mode operation can be used to tune the morphology over a wide range: for example for production of detectable nanoparticles having a pre-determined physical property to formation of thin films substantially free of particles. In the latter case, various embodiments of the present invention provide a mechanism for in-situ vapor deposition of a substrate, i.e., where the vapor is formed by particulate breakdown conducted literally "on the fly".
[0063] The same trends have been observed with metals (Ni and Co), semiconductors (ZnO), and other metal oxides (LiMn2O4 and LiMnO2). From these facts, we deduce that the effect is independent of target material, and would apply, for example, to organic materials. Figure 4(d) and 4(c) are SEM images of different magnification for the film deposited with the 19-pulse burst mode PLD where the laser delivered 9.5x106 pulses per second, each pulse having 63nJ of energy. As a comparison, we deposited a film under the same conditions as the film in Fig. 4(d), with 0.6W of laser power, 1x10-2 mbar of oxygen pressure and 60 minutes of deposition time and roughly same delivery rate of laser pulses (10x106 per second) and laser energy (60nJ per pulse), but we regrouped the laser pulses in 4-pulse bursts with a burst repetition rate of 2.5 MHz. Fig. 4(e) shows the SEM image of this film. From this comparison we strongly believe that the initial several low energy laser pulses generate particles from laser ablation, and that these particles are broken down with the subsequent low energy laser pulses, therefore we are able to deposit films with very smooth surfaces. It also suggests that 'burst' laser ablation is more efficient than continuous pulsed laser ablation in breaking down the particle size.
[0064] Figure 5 shows a set of SEM images of LiMn2O4 thin films grown on stainless steel substrates at different substrate temperature during growth. Ambient oxygen pressure (1x10-2 mbar) and laser parameters (number of burst pulses: 8-pulses, laser repetition rate: 200 kHz, laser fluence: 0.64 W) were the same for these depositions. It is clearly observed that size of the particles in the films grown at different temperature is quite similar. This suggests that size control of nanoparticles is strongly affected by laser parameters for target ablation, not the substrate temperature, during the growth.

[0065] Figures 6(a)-(d) are selected X-ray diffraction (XRD) θ-2θ patterns of LiMn2O4, LiCoO2 and their composite films (deposition time ratios of LiMn2O4 and LiCoO2 are 1:1 and 12:1 respectively in Figs 6(b) and 6(c)) deposited on a c-cut sapphire single crystal substrate. The deposition ratio for each of the materials was controlled by the deposition time of each target. The growth temperature of the substrate is 600°C. Laser parameters, e.g., number of burst pulses, laser fluence, and laser repetition rate are 8 pulses, 0.4uJ (0.64 W), and 200 kHz. Processing oxygen gas pressure during depositions was 1x10-2 mbar. The data were obtained using a Rigaku MiniFlex X-Ray Diffractometer. Crystalline LiMn2O4 and LiCoO2 films (nanoparticles) are epitaxially grown on c-cut Al2O3 substrates as shown in Figs. 6 (a) and (d). Both LiMn2O4 and LiCoO2 crystalline phases are observed in the mixture of LiMn2O4 and LiCoO2 thin films as shown in Figs 6(b) and (c). It is indicated that the materials are phase-separated composites, not solid-solution.
[0066] It was also confirmed that the size of nanoparticles can be independently controlled. Referring again to Figure 4, the effect of burst processing is evident, and is applicable for PLD of metal oxides, and may be applicable for many other materials, for example organic materials. The results show LiCoO2 and LiMn2O4 and the ratio of LiMn2O4 and LiCoO2 phases can be independently controlled. The deposition time may further control the size and ratio of the particles. In some embodiments deposited particles may be sufficiently small so as to diffuse and create a solid solution.

1. A method of pulsed laser deposition for material synthesis on a substrate material, said method comprising:

directing a burst of laser pulses having pulse widths of less than 1 ns toward an interaction region to cause an initial laser interaction between a target and at least one pulse of the burst, and also to cause at least one further laser interaction between an emission caused by said initial interaction and at least one subsequent pulse of said burst, said at least one further interaction modifying said emission caused by said initial interaction so as to synthesize a thin film on said substrate and to control a property of said thin-film material, including an average size and number of particles on or within the synthesized material,
wherein the average size of particles on or within said synthesized material decreases with an increasing number of pulses within said burst over a burst duration less than several microseconds,
said burst providing for continuous tuning of a morphology of said synthesized material with control of burst parameters,
wherein said at least one subsequent pulse of said burst also ablates said target,
wherein multiple bursts having said parameters and said duration less than several microseconds are generated at varied burst repetition rates in such a way that a rate of laser pulses per second and average laser power remain constant during said pulsed laser deposition of said thin-film material onto said substrate, and
wherein the number of pulses in each burst and the repetition rate of the burst are controlled independently.

2. The method of claim 1, wherein said emission comprises a plume of particles from said target.

4. The method of claim 1, wherein at least one of a pulse energy and number of pulses within said burst are controlled in such a way that limits the number of particles on or within said thin-film material so as to produce a substantially particle-free thin film.

7. The method of claim 1, wherein said laser pulses comprise a pulse duration less than about than 500 ps.

9. The method of claim 1, wherein the pulses in the burst have wavelengths in the near infrared spectral range.

10. The method of claim 1, wherein a selected pulse separation between individual pulses is less than about 1 µs.

13. The method of claim 1 comprising: selecting a thin-film morphology by selecting a burst parameter.

17. The method of claim 1, wherein the burst is generated, at least in part, with an acousto optic modulator (AOM) that is used for pulse selection in a chirped pulse amplification (CPA) system, and the burst width and burst repetition rate are determined by a gate width and repetition rate of the AOM, respectively. 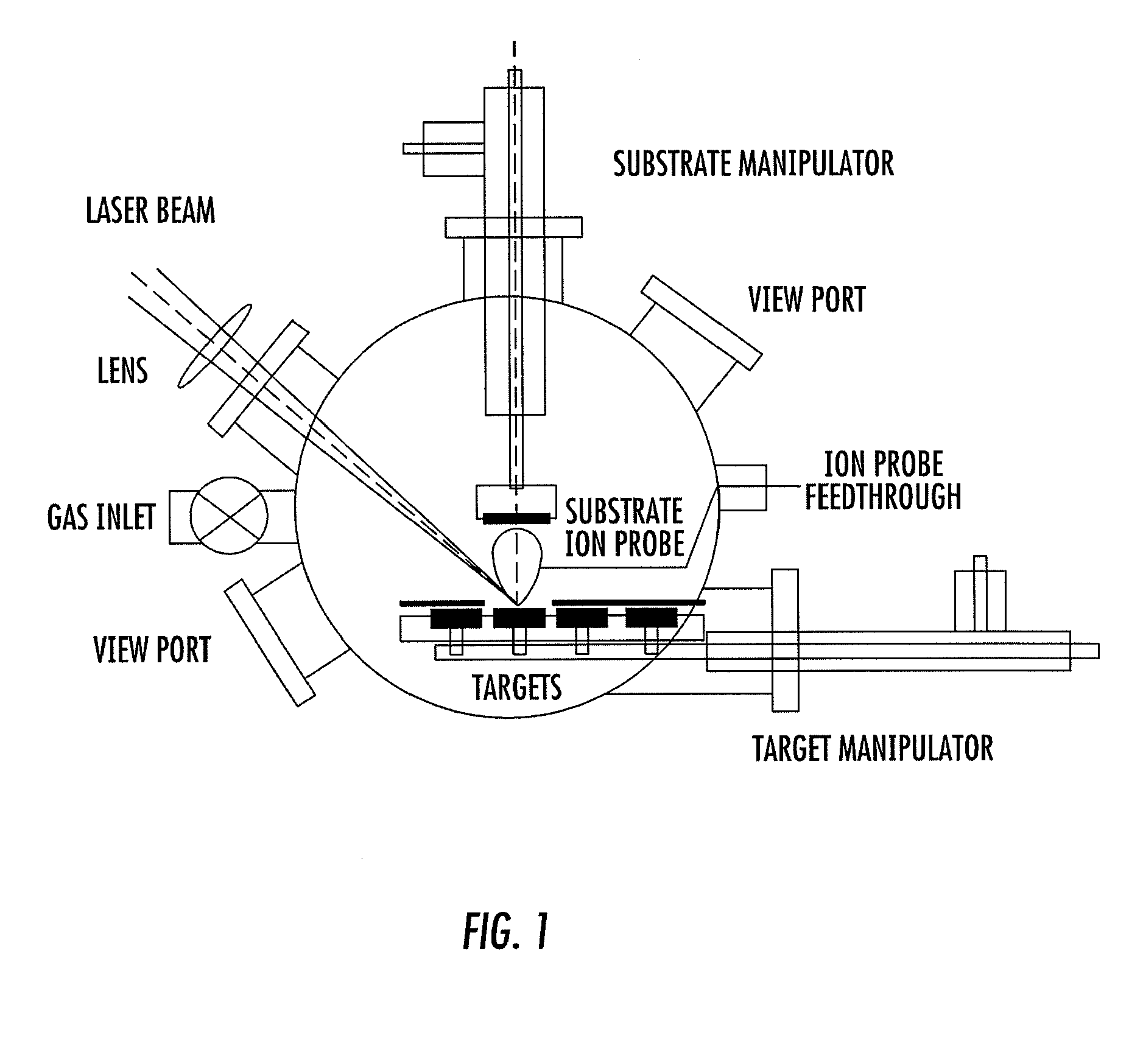 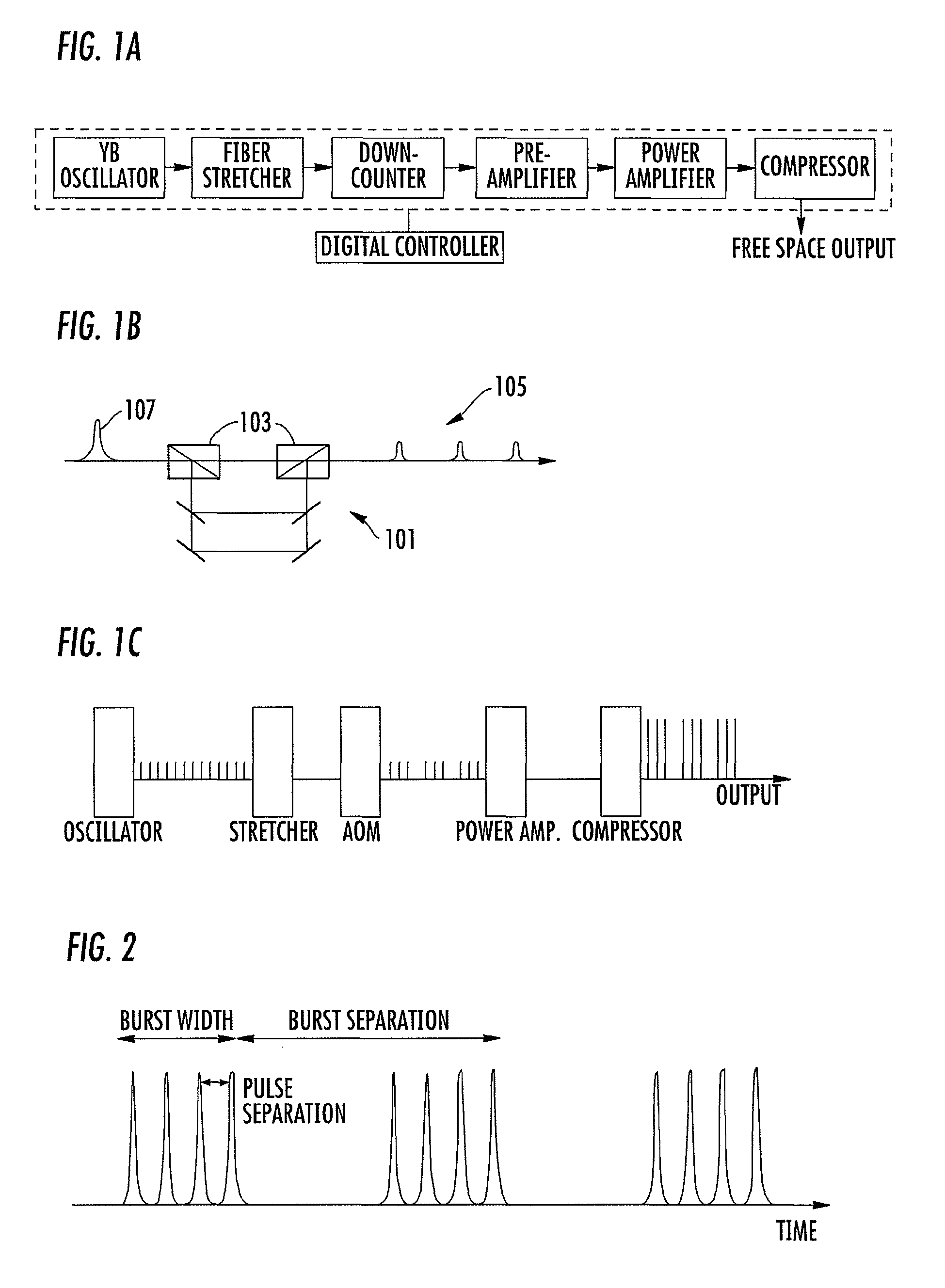 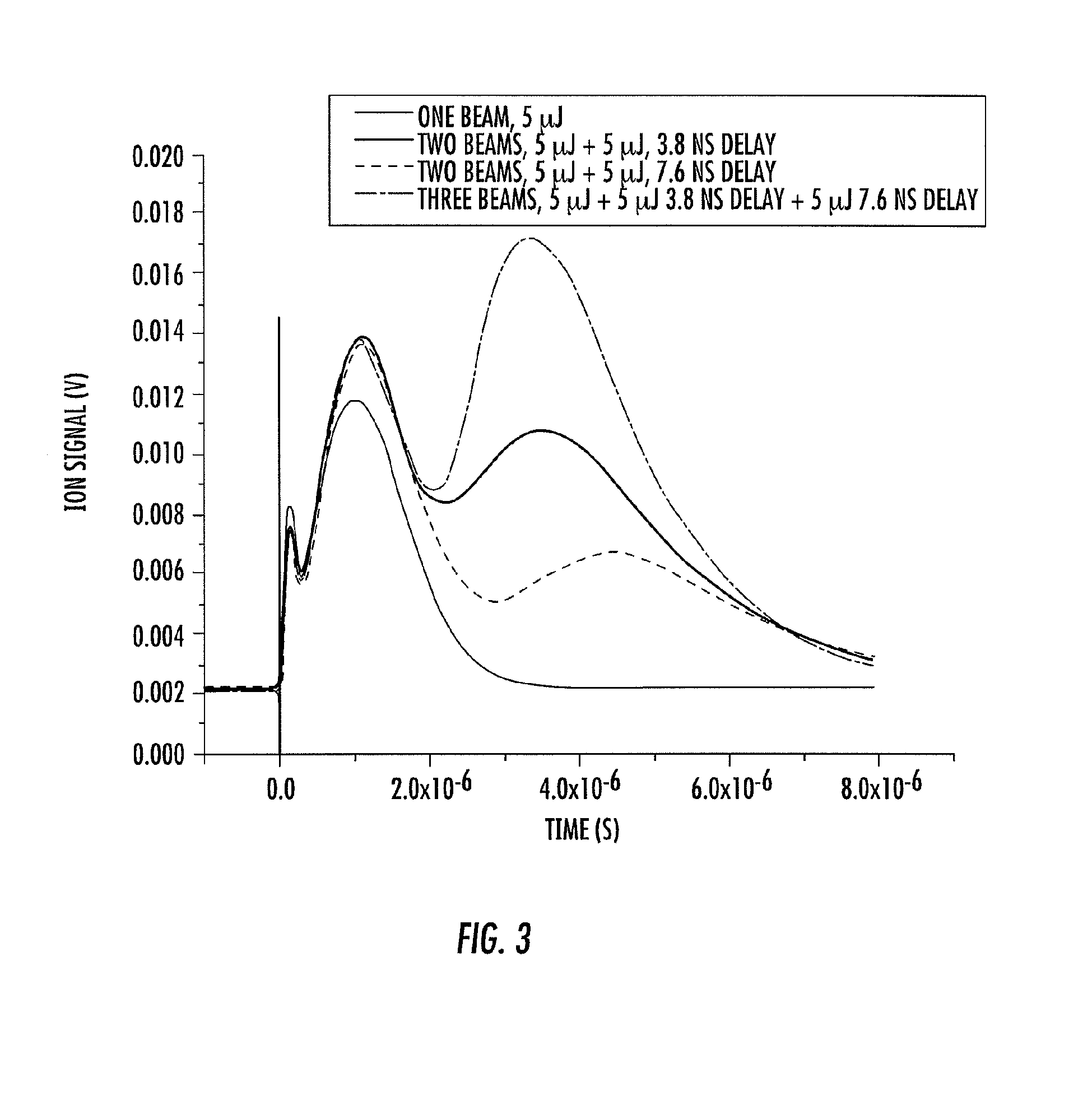 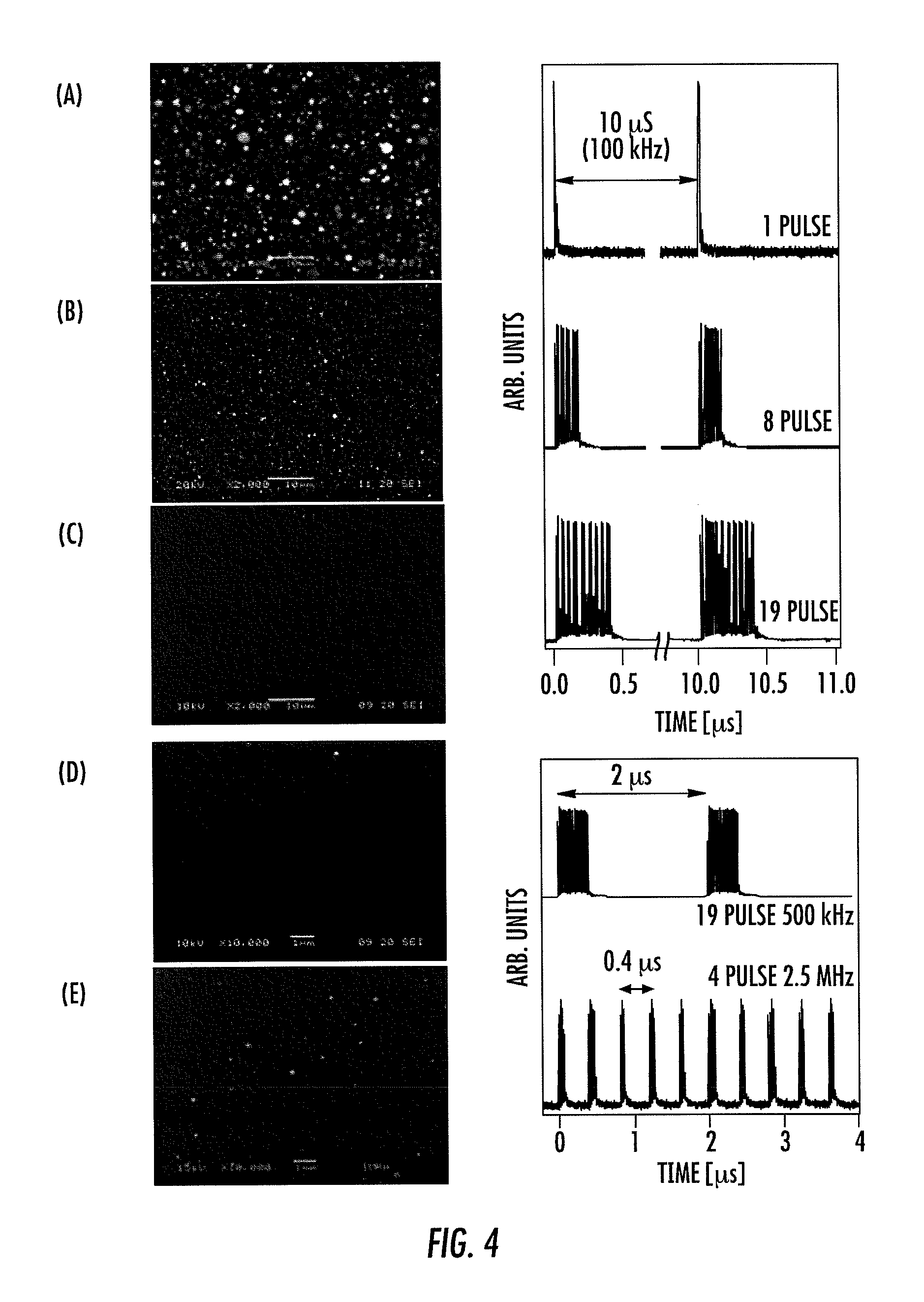 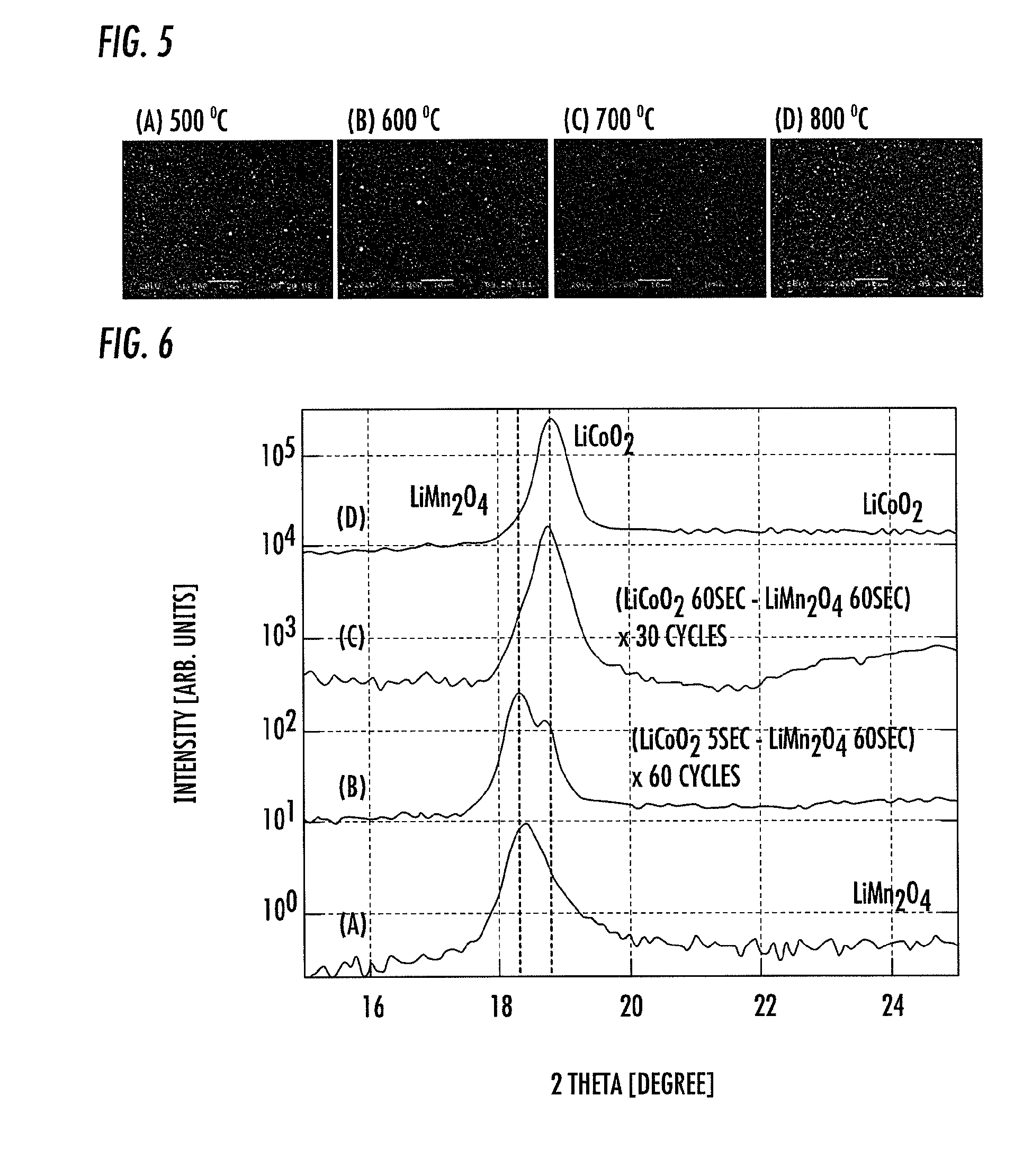 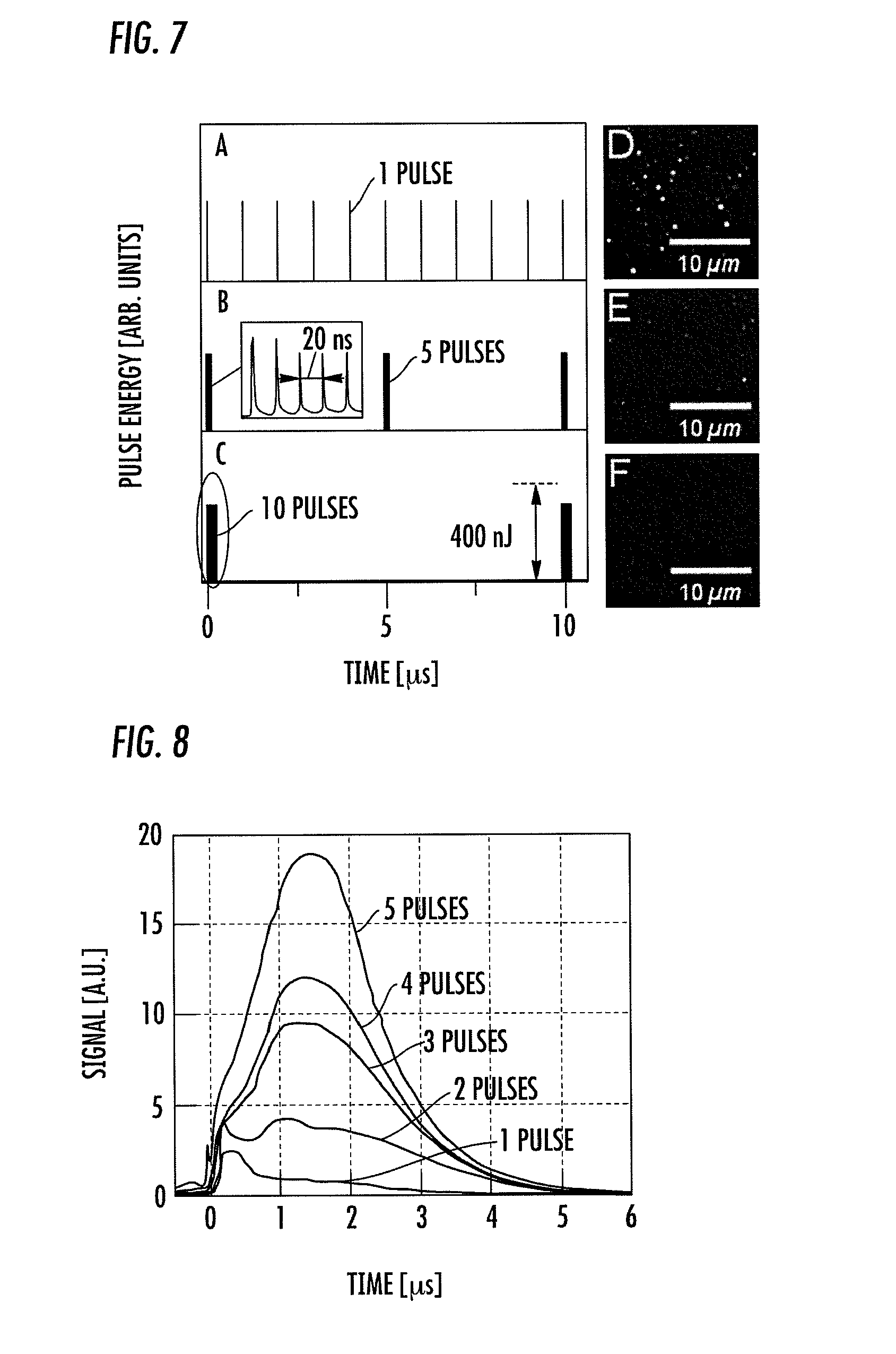 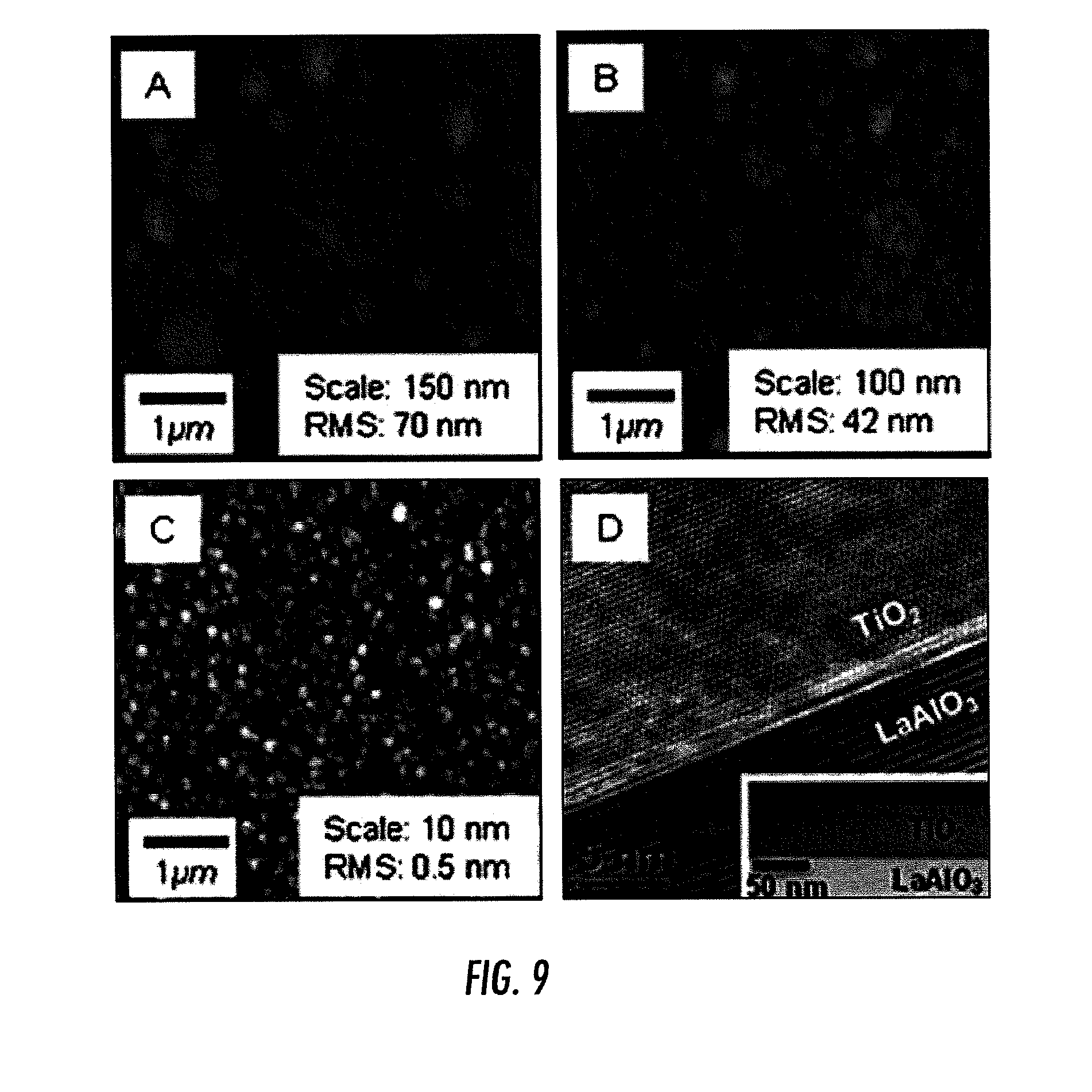