[0001] Analyte detection in physiological fluids, e.g. blood or blood-derived products, is of ever increasing importance to today's society. Analyte detection assays find use in a variety of applications, including clinical laboratory testing, home testing, etc., where the results of such testing play a prominent role in diagnosis and management in a variety of disease conditions. Analytes of interest include glucose for diabetes management, ketones, cholesterol (including HDL, LDL, and/or triglycerides), hemoglobin A1C, and the like. In response to this growing importance of analyte detection, a variety of analyte detection protocols and devices for both clinical and home use have been developed.
[0002] One type of method that is employed for analyte detection is an electrochemical method. In such methods, an aqueous liquid sample is placed into a sample reaction chamber in a test strip, in this case an electrochemical cell, including two electrodes, i.e. a first and second electrode, where the electrodes have an impedance, which renders them suitable for amperometric measurement. The component to be analyzed is allowed to react directly with an electrode, or directly or indirectly with a mediator to form an oxidizable (or reducible) substance in an amount corresponding to the concentration of the component to be analyzed, i.e. analyte. The quantity of the oxidizable (or reducible) substance present is then estimated electrochemically and related to the amount of analyte present in the initial sample.
[0003] One strategy which may be used to quantify the analyte is to allow the analyte to become substantially depleted within the electrochemical cell before electrochemically measuring an oxidizable (or reducible) substance. However, under certain conditions this process may require an extended time period to reach depletion. Other strategies for quantifying the analyte rely on a shorter waiting period. For example, an oxidation current (or reduction current) can be measured over a time period less than that required for complete depletion and the concentration is calculated by extrapolating the collected data. While shorter calculation procedures meet the desire for expedient analysis (especially in the case of glucose monitoring) such methods may lack the desired accuracy. Therefore, it would be desirable to develop a method for quickly and accurately measuring the concentration of an analyte in an electrochemical cell. Electrochemical methods and devices for use in the determination of hematocrit corrected analyte concentrations are known from WO0157510A2.

[0004] In accordance with the present invention, there is provided a method as defined by claim 1.

[0005] The novel features of the invention are set forth with particularity in the appended claims. A better understanding of the features and advantages of the present invention will be obtained by reference to the following detailed description that sets forth illustrative embodiments, in which the principles of the invention are utilized, and the accompanying drawings of which:

FIG. 1 shows an exploded perspective view of a test strip suitable for use in the present invention;

FIG. 2 is a bottom plan view of the test strip;

FIG. 3 is a top plan view of the test strip;

FIG. 4 is a partial cross-sectional side view of a distal portion of the test strip;

FIG. 5 is a simplified schematic showing a meter electrically interfacing with the test strip;

FIG. 7 is a time-current transient generated by a meter that is testing a test strip dosed with a physiological sample; and

FIG. 8 is a bias graph showing the relationship between glucose concentration and bias to a reference method.

DETAILED DESCRIPTION OF ILLUSTRATIVE EMBODIMENTS OF THE INVENTION

[0026] The term ipp is the average current over a short period of time near the end of first time-current transient. For example, where the first time interval is 3 seconds long, the average current may be the average current from 1.9 to 2.9 seconds of the 3 second long period.
[0027] The term iss is the steady-state current value for the second time-current transient. Because the height of spacer is about less than or equal to the diffusion layer height, the current tends toward a steady-state value. The term iss may be estimated using Equation 2, for currents at times greater than a minimum time, where a suitable minimum time can be estimated from Equation 1.

in which, iss the steady-state current following application of the second electric potential; i is the measured current which is a function of time; D is the diffusion coefficient of the redox-active molecule, where this coefficient may be determined from Fick's first law, i.e. J(x,t)=-D dC(x,t) /dx; L is the spacer thickness; and t is the time for the application of the second electric potential where t=0 for the beginning of the pulse.
[0028] The preliminary analyte concentration Co for the analyte of interest in the sample is calculated using the following Equation 3,

in which, F is Faraday's constant, i.e. 9.6485×104C/mol, and A is the area of the first electrode.
[0029] Eq. 4 shows the equation used to convert the measured current into an analyte concentration [C] in which CF is the correction factor and Z is a constant which accounts for background currents.

[0030] The term CF can be an empirical equation, based on γ and Co, which causes the analyte concentration [C] to be more accurate. An example of a mathematical expression for CF is shown in Eq. 5 in which b, c, and d are constants.

[0053] A buffer was prepared that contained 100 mM citraconate at pH 6.5, 0.1% anti-foam (RNA Equilibrator), and 4 mM CaCl2. Next, GDH which used a PQQ cofactor, was added to the buffer so that it was 46 mg/mL. PQQ was then added to the buffer so that it could activate the GDH. PQQ was added to the buffer such that there were at least 2 moles of PQQ per mole of GDH. After addition of PQQ, the formulation was allowed to incubate about one hour. Next, potassium ferricyanide was added to the mixture such that it was 800 mM. The formulation was striped onto first electrode 166 as shown in FIG. 1 by means of a slot coating process which is described in U.S Patent No.'s 6749887; 6689411; and 6676995. Upon coating the formulation and drying it such that it forms reagent layer 72, spacer 60 and second electrode 164 are assembled thereon to form test strip 62.

1. A method for determining an analyte concentration in a physiological sample, the method comprising:

(b) applying a first electric potential having a first polarity to the reaction cell and measuring cell current as a function of time to obtain a first time-current transient;

(f) calculating a correction factor by setting the ratio to a power p;

(g) multiplying the first current value less a background value by the correction factor to derive the analyte concentration.

2. The method according to claim 1, wherein the analyte comprises glucose.

3. The method according to claim 2, wherein the physiological sample comprises a material selected from the group consisting of whole blood, plasma, serum, interstitial fluid, urine, or combinations thereof. 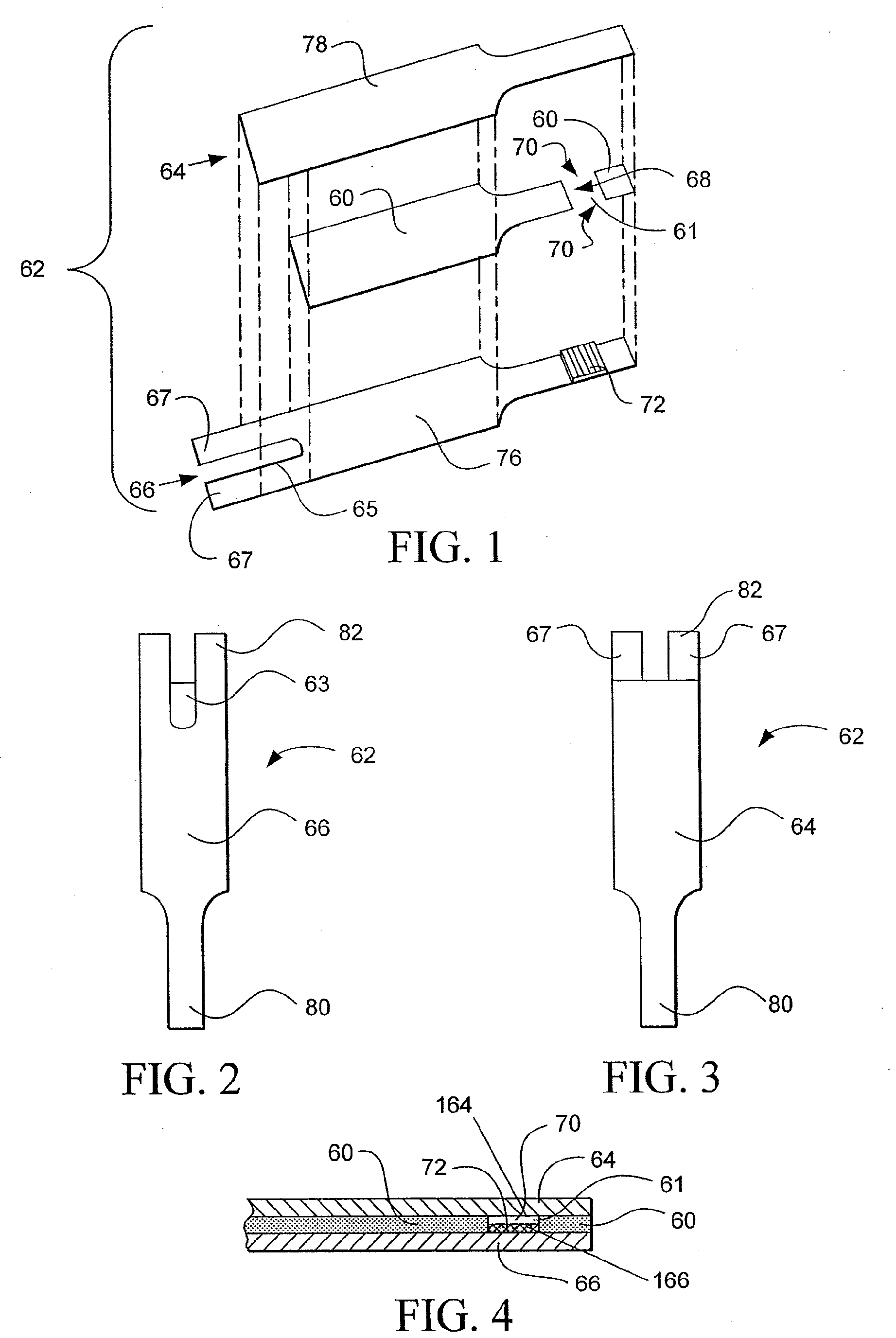 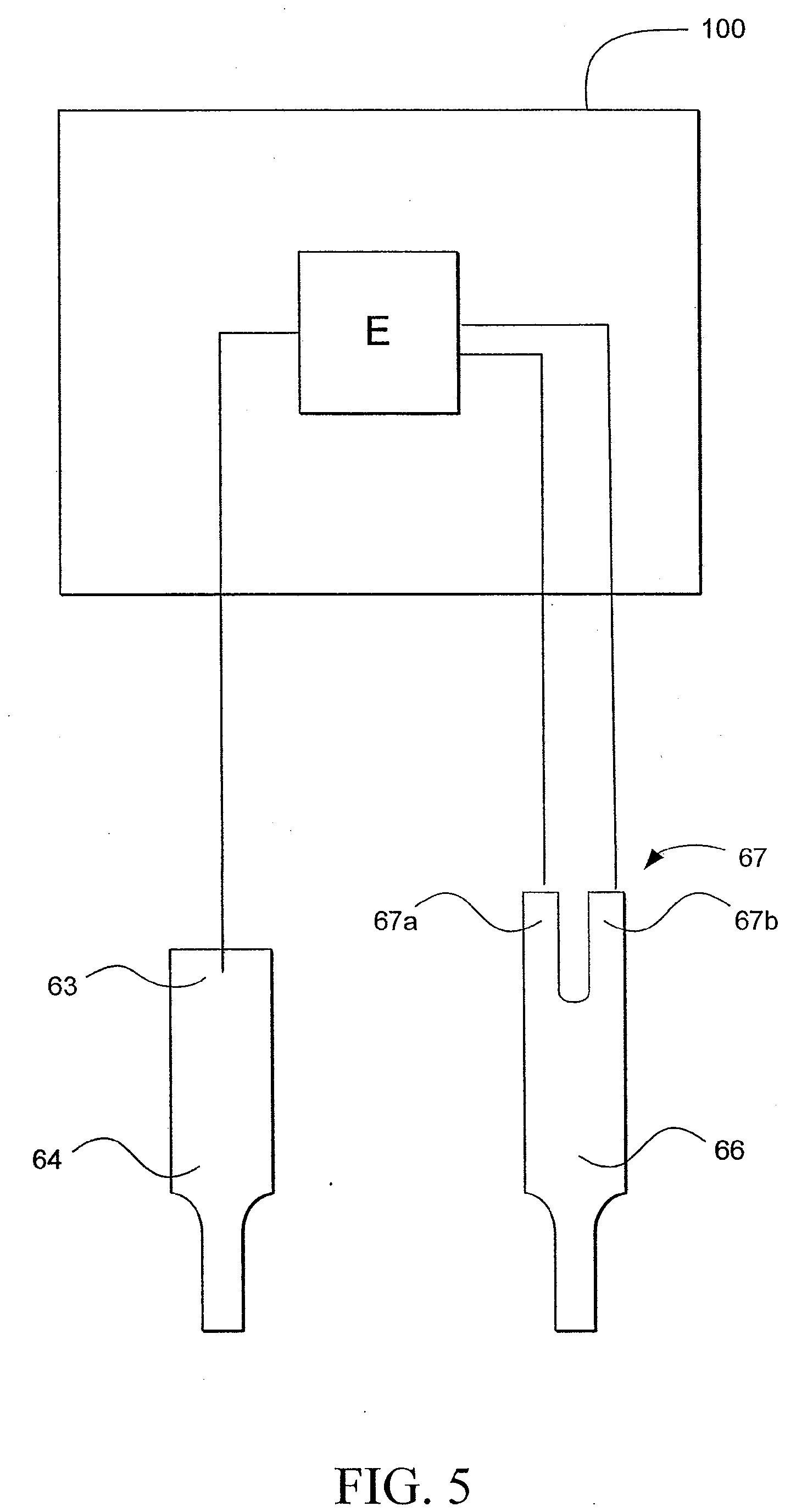 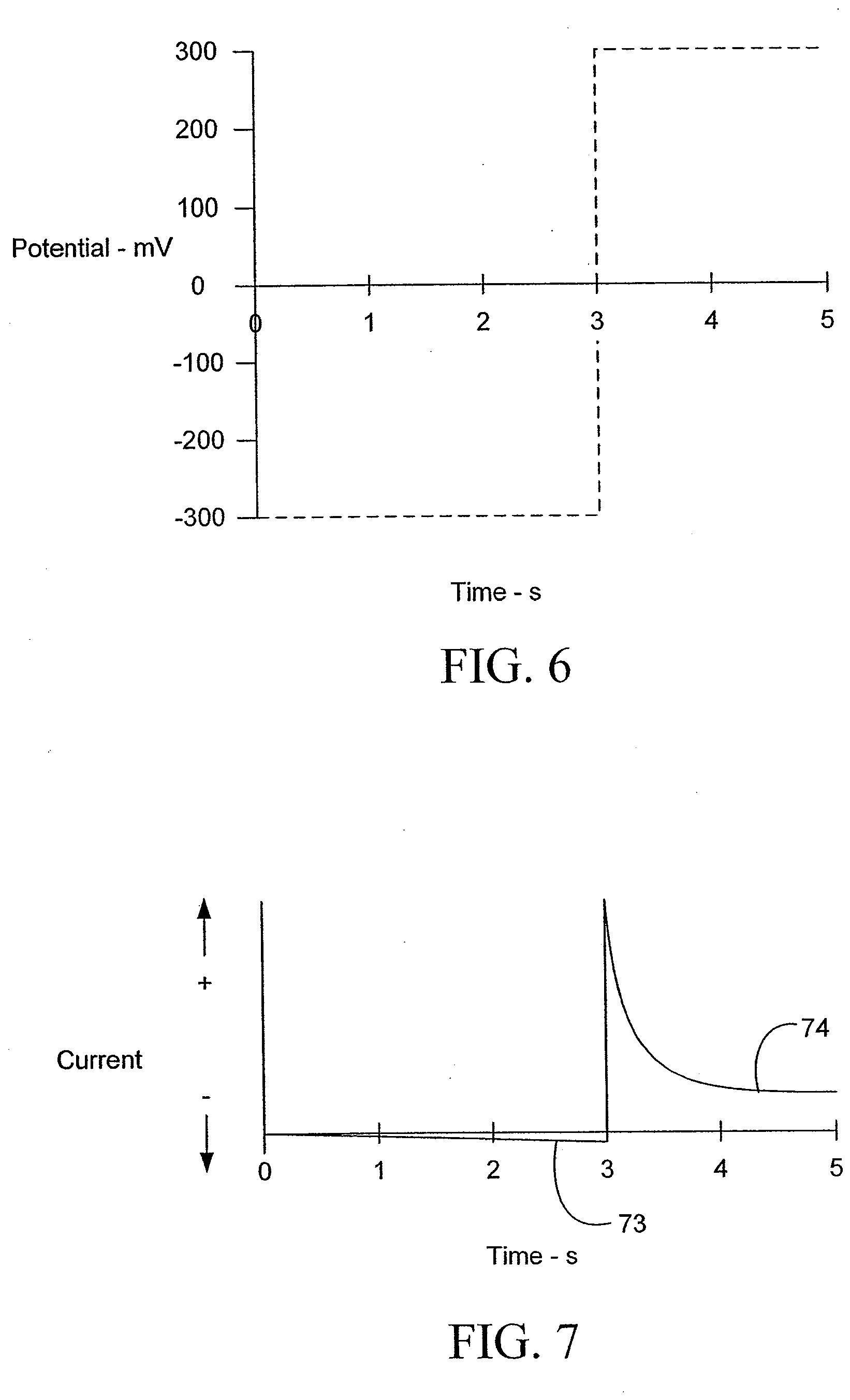 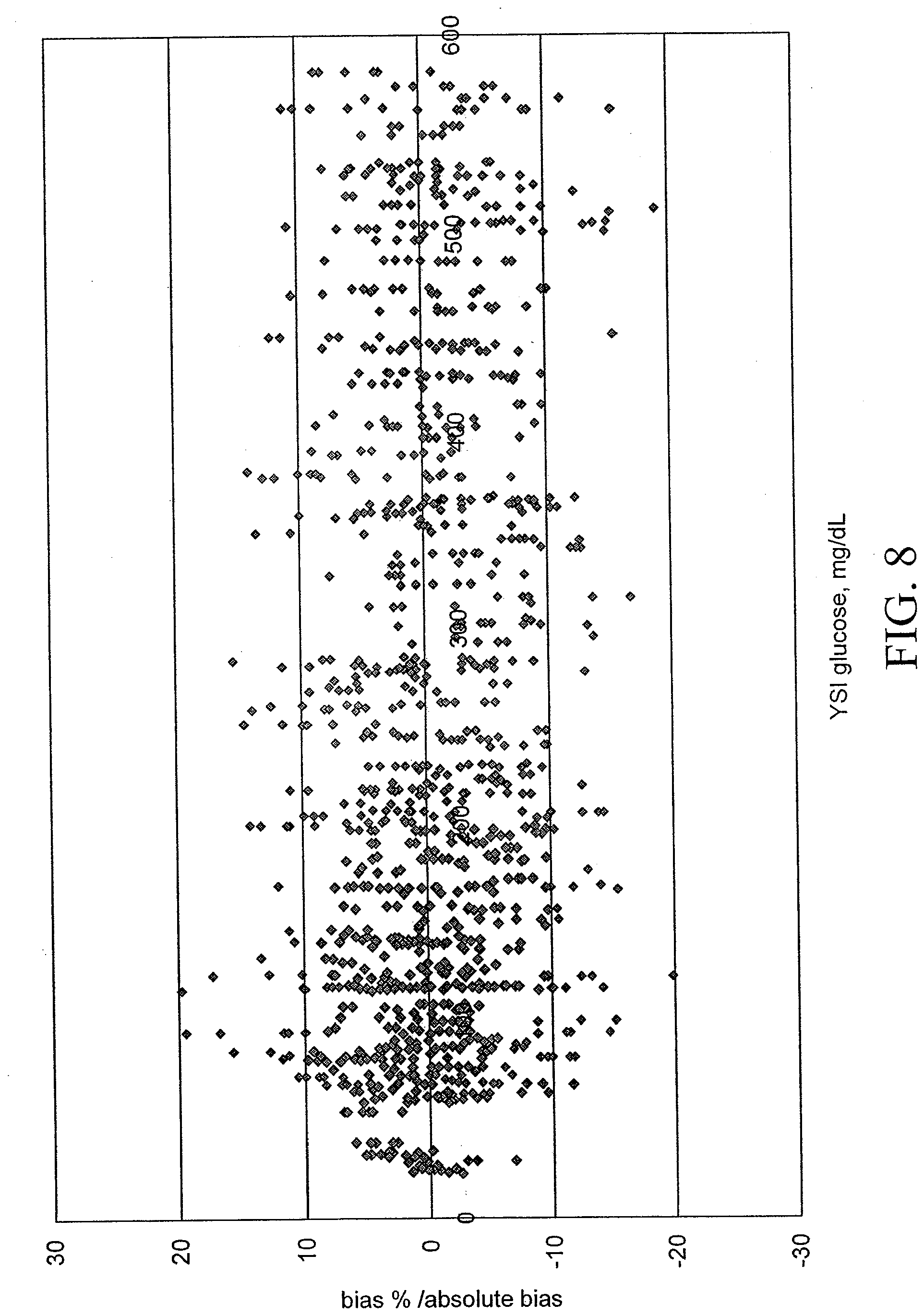