[0001] The present invention relates to a system for determining the composition of a sample.

[0018] An object of the invention, therefore, is to provide an EDS microcalorimeter system with the capability of performing high resolution mapping.
[0019] The present invention includes a microcalorimeter-type EDS system that provides sufficient resolution and throughput for practical high spatial resolution x-ray mapping of a sample. Embodiments of the invention use a wide-angle opening for x-ray optics to increase the fraction of x-rays leaving the sample that impinge on the detector. Embodiments of the invention use multiple detectors to improve the maximum count rate that can be processed by the EDS system. Embodiments of the invention use a neutron transmutation doped temperature measurement element to improve resolution. Some embodiments use a tin x-ray absorber. Embodiments of the invention use a JFET amplifier to measure the change in current of the temperature-sensing element.
[0020] Some embodiments of the invention include a dual beam system that provides an electron beam and an ion beam. The electron beam can be used to generate x-rays for analysis and the ion beam can be used to expose underlying material to analyze. By repeatedly analyzing a layer of material, removing the analyzed layer, and analyzing the newly uncovered layer, a three-dimensional map of material present on the sample can be created. Some embodiments use rapid electron beam scanning and periodic plasma cleaning to enable drift correction, and minimization of sample damage, contamination buildup and charging; that is problems the severity of which increases with improved spatial resolution.
[0021] The foregoing has outlined rather broadly the features and technical advantages of the present invention in order that the detailed description of the invention that follows may be better understood. Additional features and advantages of the invention will be described hereinafter. It should be appreciated by those skilled in the art that the conception and specific embodiments disclosed may be readily utilized as a basis for modifying or designing other structures for carrying out the same purposes of the present invention. It should also be realized by those skilled in the art that such equivalent constructions do not depart from the spirit and scope of the invention as set forth in the appended claims.

For a more thorough understanding of the present invention, and advantages thereof, reference is now made to the following descriptions taken in conjunction with the accompanying drawings, in which:

FIG. 1 shows a typical prior art microcalorimeter-type energy dispersive x-ray spectrometer. FIG. 1 B shows an enlarged cross section of the X-ray optic shown in FIG. 1A;

FIG. 2 shows a prior art detector used with the system of FIG. 1A;

FIG. 3 shows portions of an x-ray spectrum drawn at three different scales of the mineral monazite;

FIG. 4 shows a preferred embodiment of a microcalorimeter-type EDS system of the present invention;

FIG. 7 shows a typical output pulse from a detector of FIG. 6

FIG. 8 shows the figure of merit for a number of characteristic x-ray peaks excited in single element materials by a 5 keV electron beam.

FIG. 9 shows an x-ray spectrum, with portions of the spectrum shown in enlarged views.

The accompanying drawings are not intended to be drawn to scale. In the drawings, each identical or nearly identical component that is illustrated in various figures is represented by a like numeral. For purposes of clarity, not every component may be labeled in every drawing.

1. A system (400) for x-ray mapping of a sample (402) to show the material present at different positions on the sample, comprising:

an electron focusing column (404) capable of focusing an electron beam to a diameter of less than 100 nm;

an x-ray optic (410) for receiving x-rays emitted from the sample; and

the x-ray optic has an entrance for receiving x-rays over a solid angle of at least 10 degrees; and

an absorber (507) for absorbing x-rays exiting the x-ray optic; and

a temperature sensing device (508) for converting a change in temperature of the x-ray absorber into an electronic signal; and

an amplifier for receiving the electronic signals from the detector
temperature sensing device and amplifying the signal;

the multiple x-ray detectors are positioned away from the focal plane so that the x-ray flux is decreased and the x-ray image expanded over the array;

the amplifier is a JFET amplifier.

3. The system of claims any of the above claims further comprising an ion beam focusing column (406) for directing ions toward the sample to remove material from the sample to expose areas for analysis.

5. The system of any of the above claims in which the electron beam column has a sufficiently small beam spot to resolve material separated by 15 nm and in which the multiple x-ray detectors are capable of resolving energy difference of 15 eV, the system capable of determining a material map composed of 100 by 100 pixels while collecting x-rays for a period of less than twenty minutes.

6. The system of any of the above claims in which the system is capable of producing a signal to noise ratio of less than 4 for the Au M line emitted from bulk Au irradiated by 5 keV electrons.

7. The system of any of the above claims in which the microcalorimeter provides a solid angle of collection greater than 10-2 sr.

8. The system of any of the above claims in which the x-ray optic has an entrance for receiving x-rays of at least 15 degrees.

9. A method of using the system according to claim 1 to form a high spatial resolution, high energy resolution x-ray map of a sample, comprising:

a. directing a beam of electrons having energies of less than 5,000 eV toward a sample in a vacuum chamber, the electron beam forming a spot having a diameter of less than 50 nm on the sample;

b. conducting x-rays created by the impact of the electrons on the sample through an x-ray optic towards multiple cryogenic x-ray detectors;

c. determining the energy of the x-rays impacting the detector to determine the material present at the location at which the electron beam impacts the sample;

d. moving the impact point of the electron beam to a different point on the surface determining the energy of the x-rays includes using multiple cryogenic x-ray calorimeter detectors; and
characterized by:

repeating steps b and c for an array of at least 5,000 points in a time period of less than one hour to produce a map of material present in the region scanned by the electron beam.

10. The method of claim 9 in which removing a layer of material including the points to which the electron beam was directed and repeating steps a-d for a second array of points below the first array of points to produce a three-dimensional x-ray map.

12. The method of any of claims 9-11 in which conducting x-rays created by the impact of the electrons on the sample through an x-ray optic towards multiple cryogenic x-ray detectors includes conducting x-rays using a glass capillary having an acceptance angle of greater than 10 degrees.

13. The method of any of claims 9-12 in which determining the energy of the x-rays impacting the detector includes measuring the increase in temperature of an x-ray absorber using a neutron transmutation doped germanium crystal. 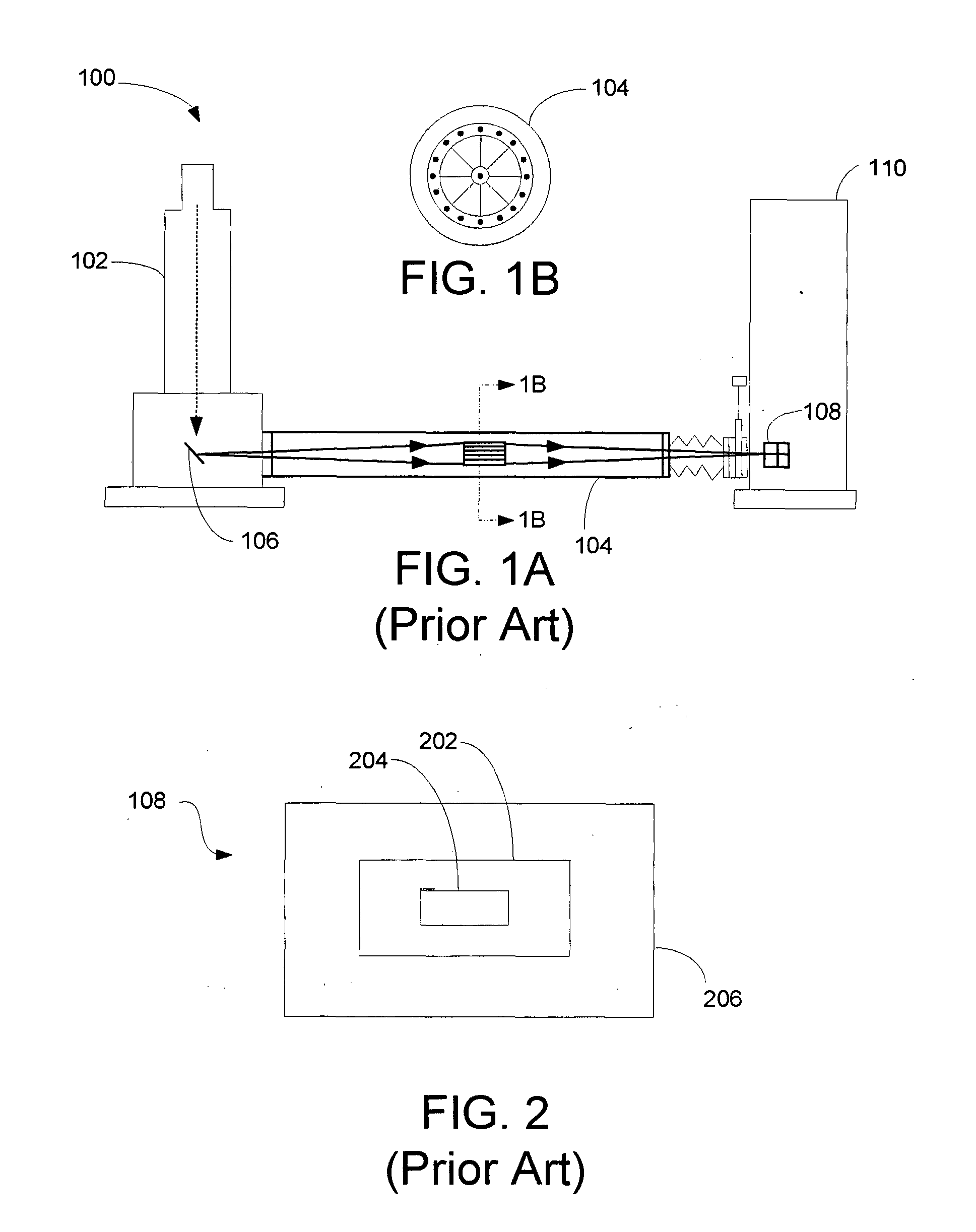 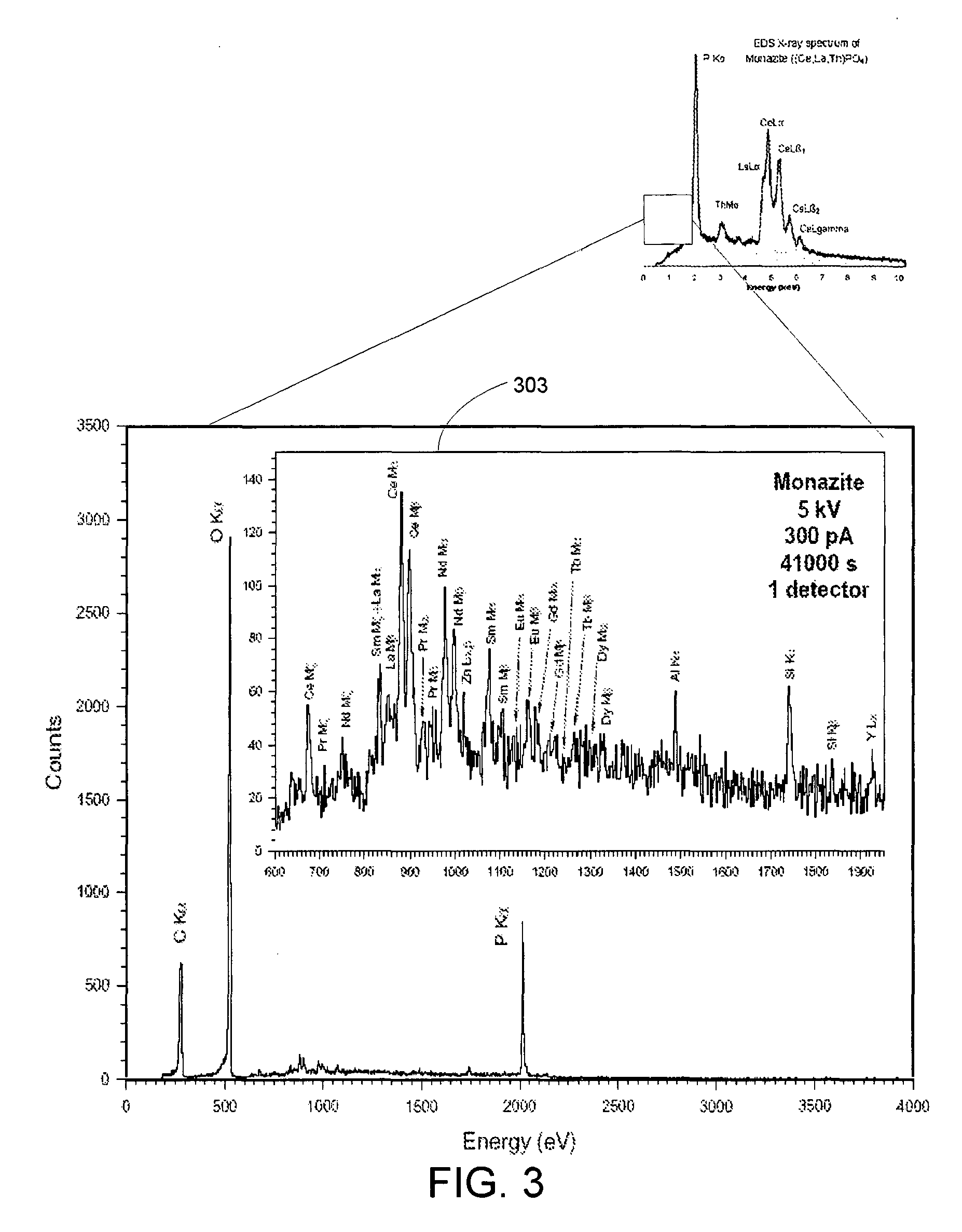 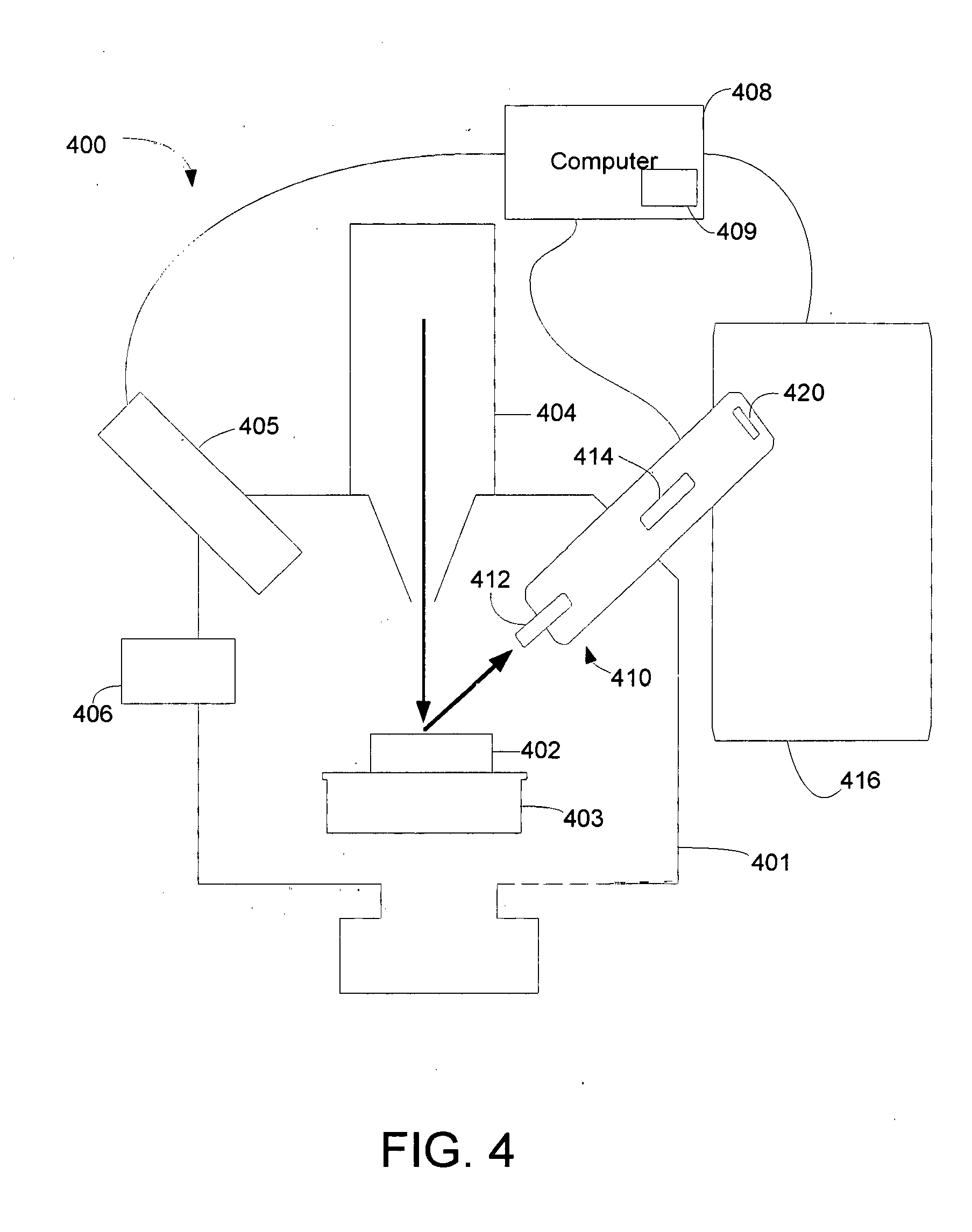 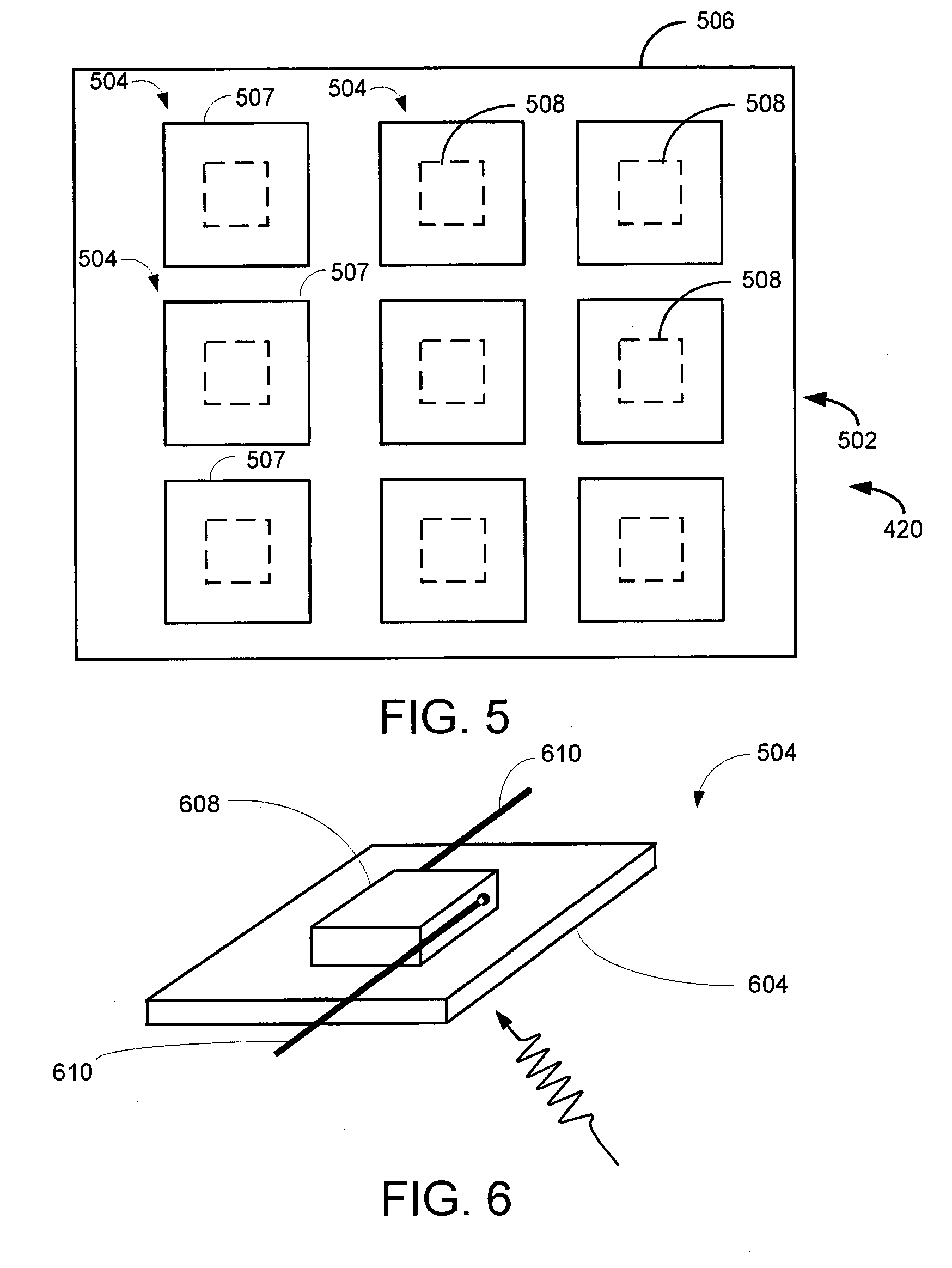 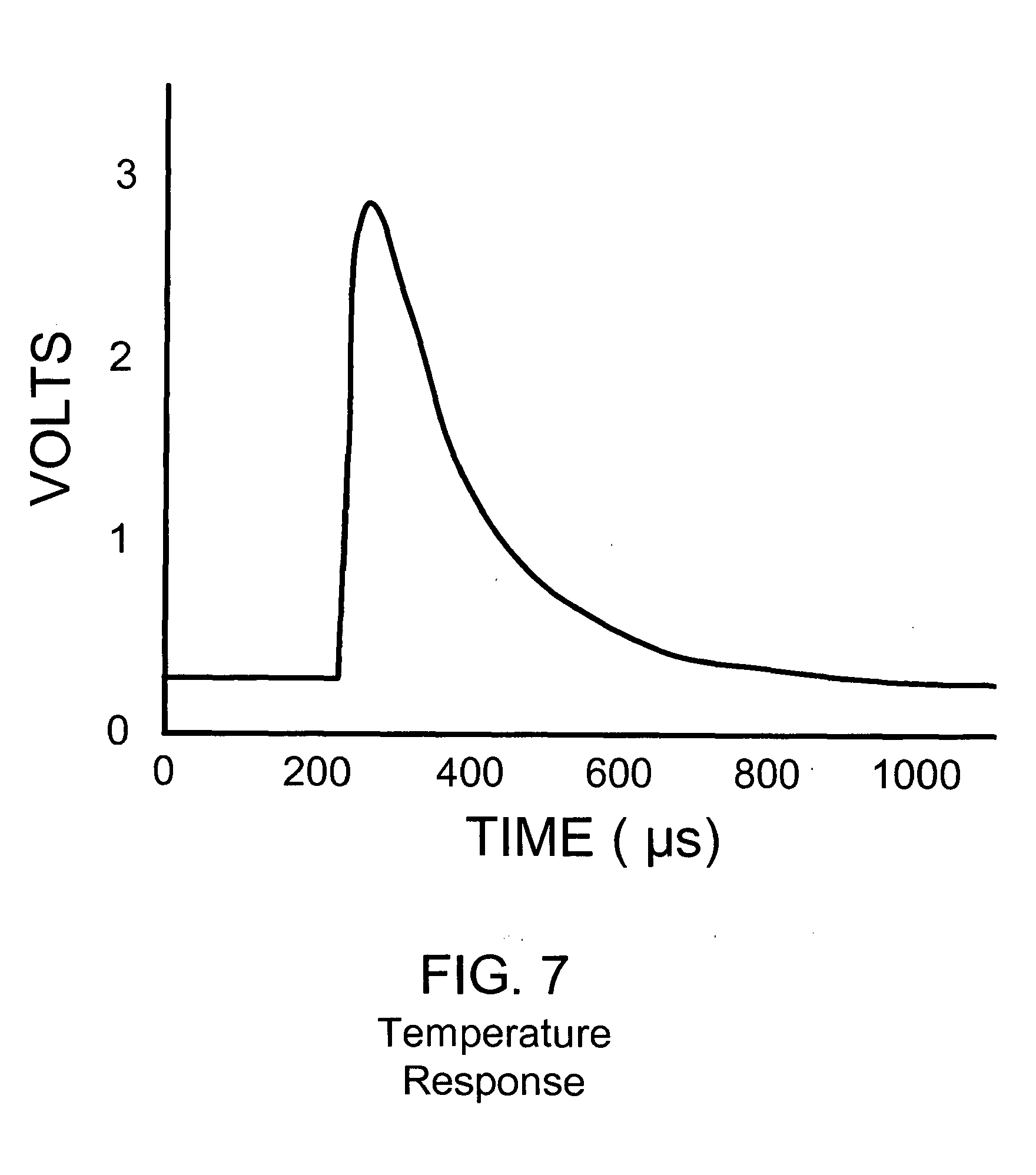 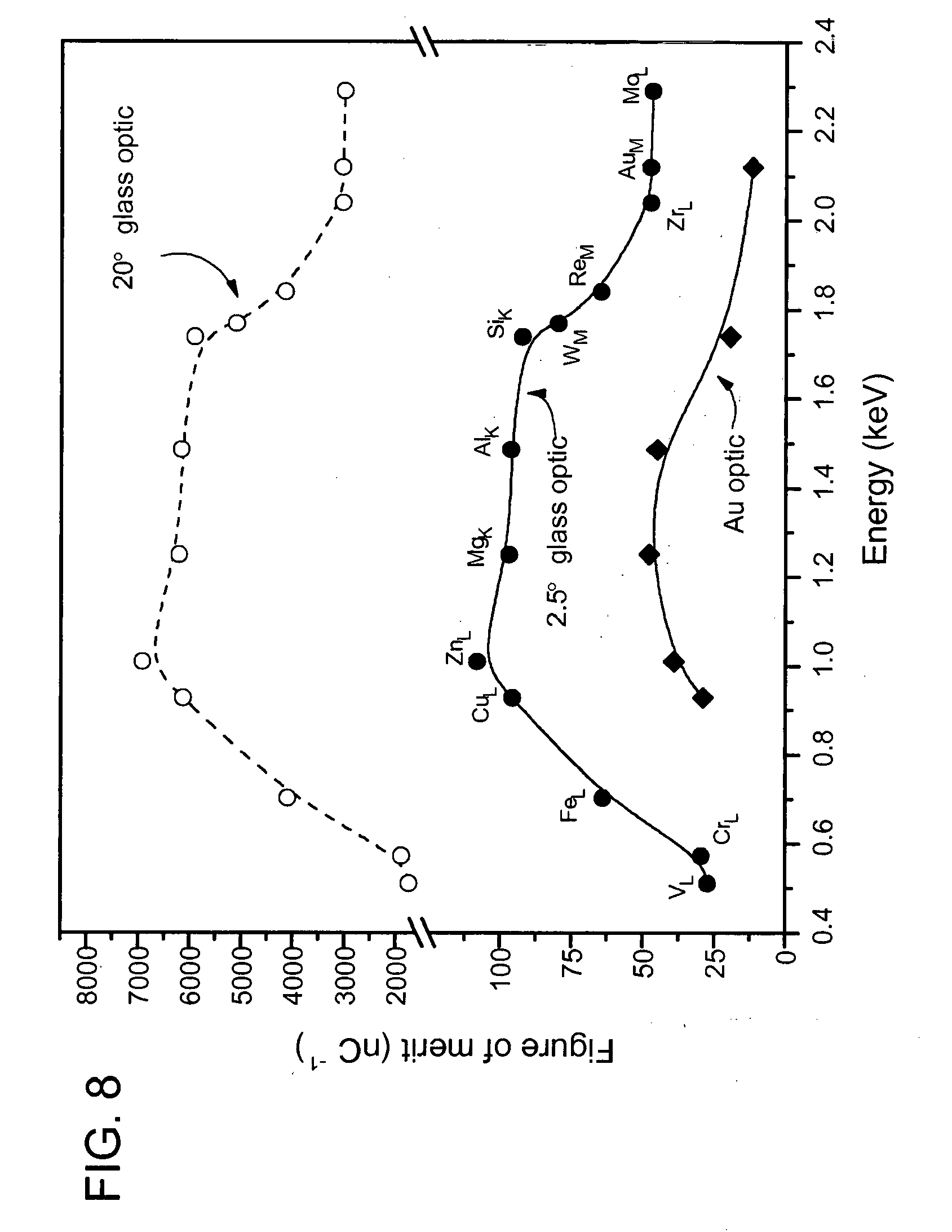 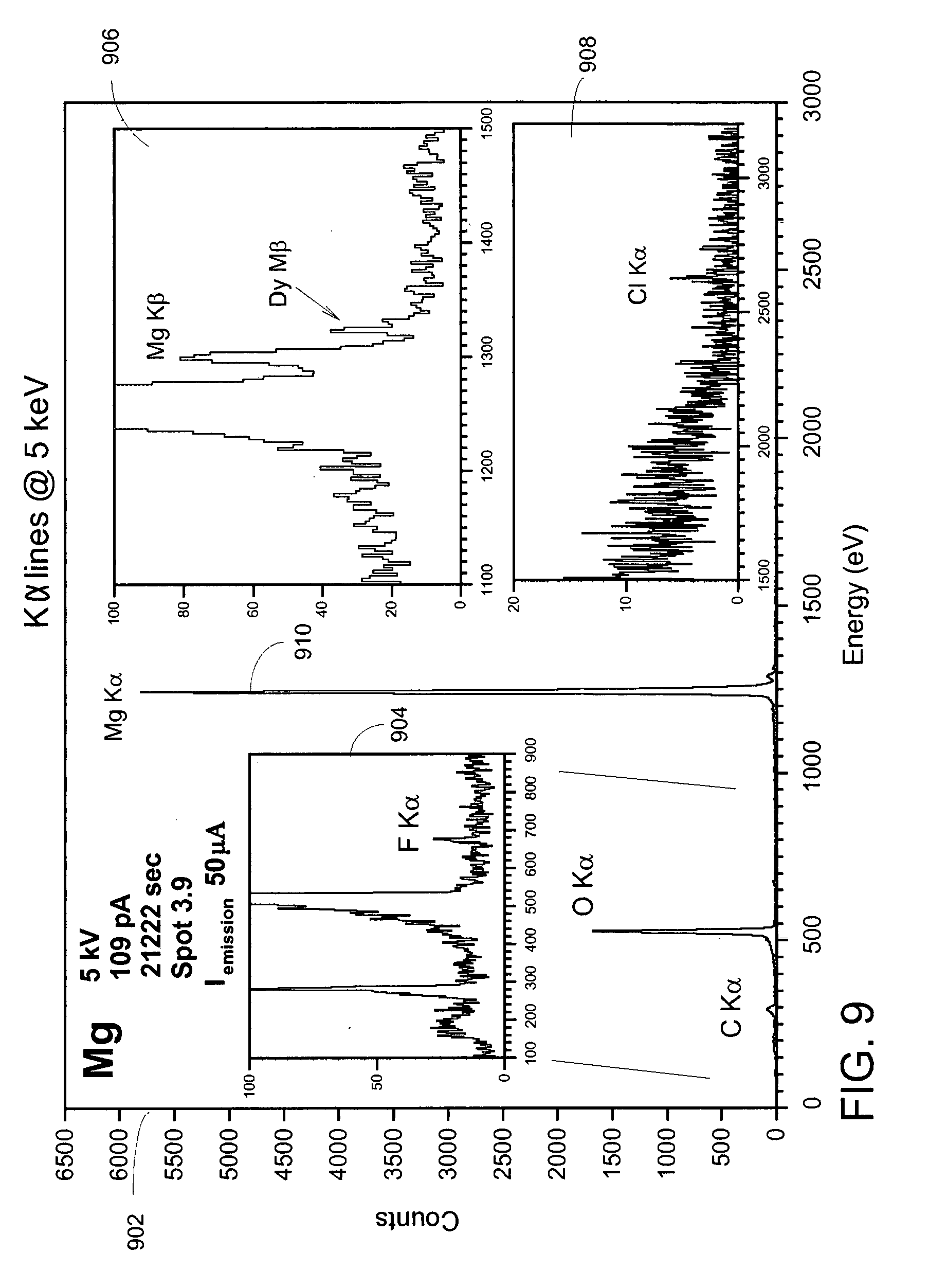 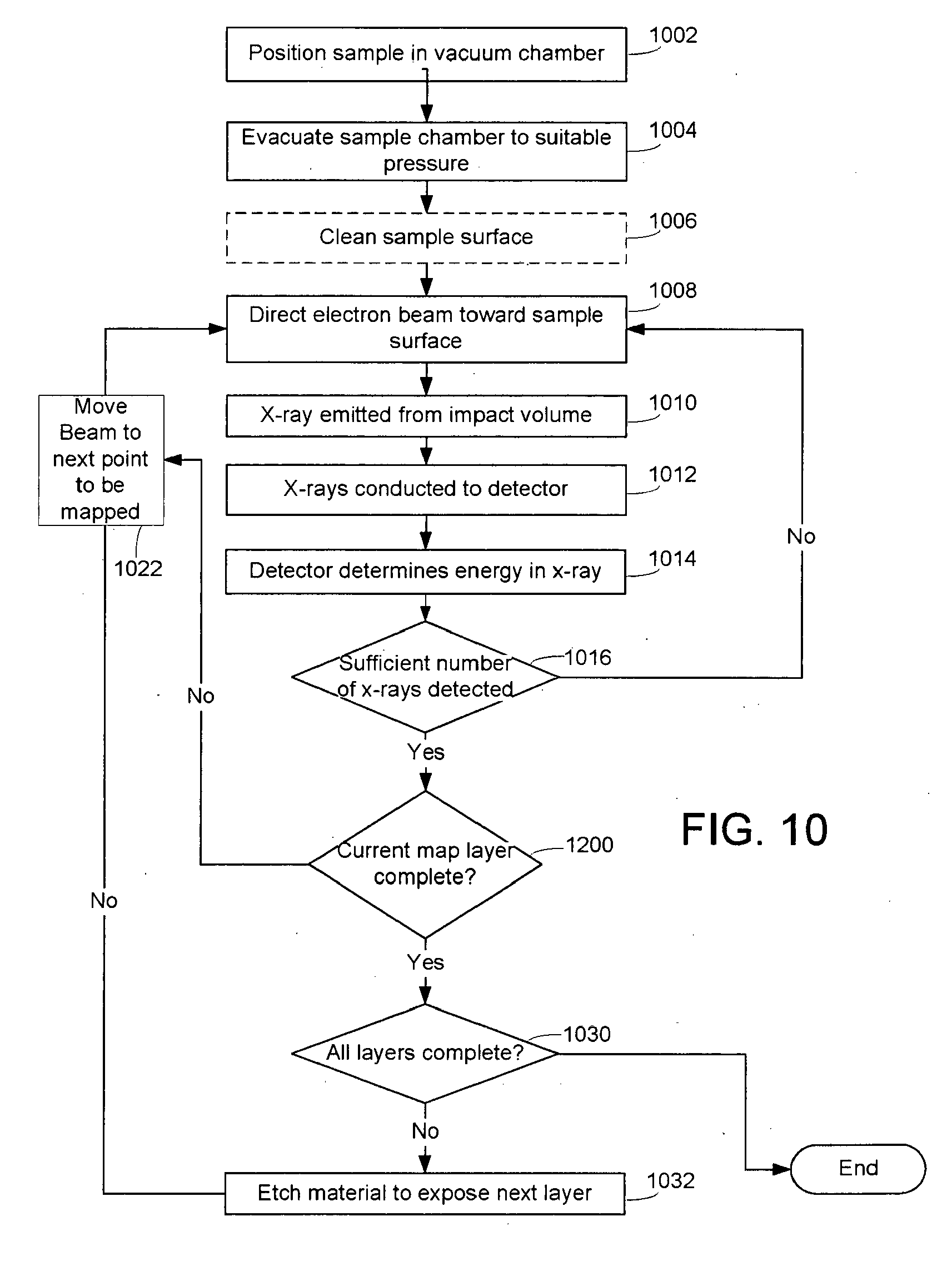