[0002] Surgical needles and methods of manufacturing surgical needles are known in the art. Surgical needles are typically made from conventional biocompatible metals such as stainless steels. The selection of the materials used to manufacture the surgical needles depends upon a variety of factors including manufacturability, machineablility, cost, biocompatibility, and mechanical properties. Conventional surgical needles are made utilizing conventional manufacturing processes. Typically, a wire made from a biocompatible metal is drawn in a conventional wire mill to obtain a wire having a desired diameter or wire size. The wire is then cut into pieces known as needle blanks having a desired length, and the needle blanks are then processed through a series of conventional manufacturing process steps including bending, forming, grinding, polishing, heat treating, coating, etc.
[0003] A conventional surgical needle has a distal piercing point and a proximal suture mounting section. The proximal suture mounting sections are typically a channel formed in the proximal end or a bore hole drilled into the proximal end. If a bore hole is used, it is typically formed by conventional mechanical drilling or laser drilling processes. Suture mounting is accomplished by inserting an end of a surgical suture into the channel or into the bore hole, and then mechanically compressing a section of the proximal end of the surgical needle about the end of the suture using any of a variety of conventional processes known in the art as swaging. The degree of swaging will depend upon the desired release characteristics, i.e., the amount of force necessary to detach the suture from the channel or bore hole.
[0004] There is a constant need in this art for improved surgical needles having improved performance characteristics. It is desirable to have a surgical needle made from a wire having a diameter as close as possible to that of the suture to which it is attached . This can be accomplished by having a needle with the smallest cross-section possible (made from a wire having a small wire size) while providing sufficient resistance to bending when a surgeon grasps the needle and passes it through tissue. While existing surgical needles made from conventional stainless steels have such properties, novel needles made from materials such as refractory metal alloys have been developed that have maximized such characteristics. Since these materials are typically harder than conventional stainless steel alloys and have other differing metallurgical characteristics including greater strength, higher elastic modulus, and desirable magnetic properties, novel processes are needed to manufacture such needles and to manufacture needle-suture combinations utilizing such needles. For example, it is known that swaging a surgical suture to a drilled refractory alloy surgical needle may result in cracking about the proximal end of the needle.

FIG. 1 is a plan view of a drilled surgical needle made from a refractory alloy.

FIG. 2 illustrates the needle of FIG. 1 with a suture mounted to the bore hole of the needle after treatment with the process of the present invention.

FIG. 3 is a schematic diagram illustrating the process of the present invention wherein surgical needles mounted to a strip are heat treated.

FIG. 3A is a partial plan view of the strip containing needles of FIG. 3.

[0023] Tungsten-Rhenium alloy needles were prepared in a similar manner to the needles of Example 1. The needles were made from an alloy wire having the same composition as that used in Example 1. After laser drilling and prior to suture mounting and mechanical swaging, the needles were heat treated in a furnace at about 1000°C for about about 30 minutes to effectively stress relieve the metal in needles about the laser-drilled bore holes. The same polyester suture was mounted to the heat treated needles and swaged in an identical manner and using the same equipment as in Example 2. None of the needles exhibited cracking in the proximal needle mounting end about the laser-drilled bore hole.
[0024] Although this invention has been shown and described with respect to detailed embodiments thereof, it will be understood by those skilled in the art that various changes in form and detail thereof may be made without departing from the scope of the claimed invention.

heat treating at least the suture mounting end (41) by exposing said end to thermal energy for a sufficient amount of time to provide sufficient energy to effectively stress relieve the metal alloy about the bore hole (50) without annealing the metal alloy. 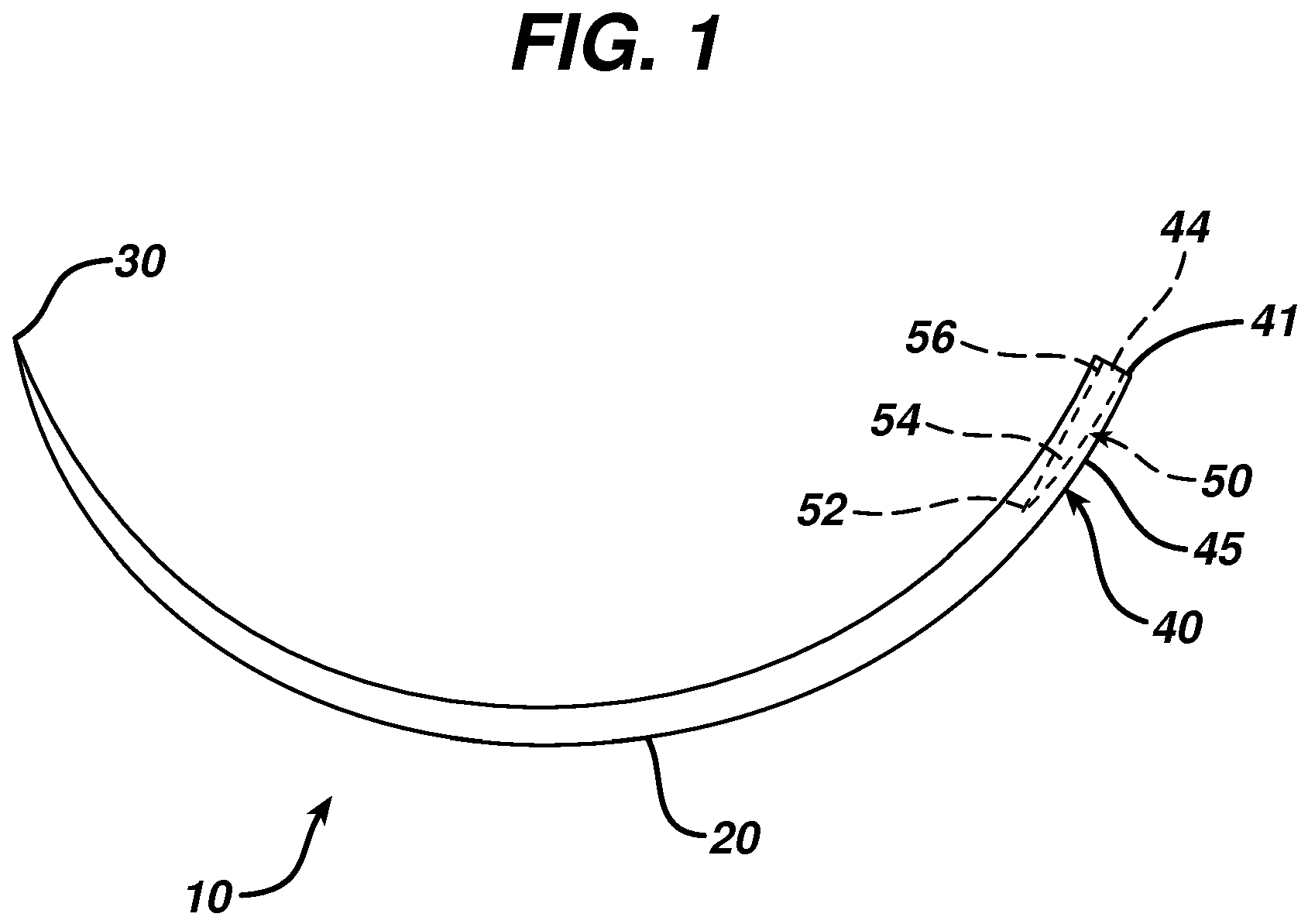 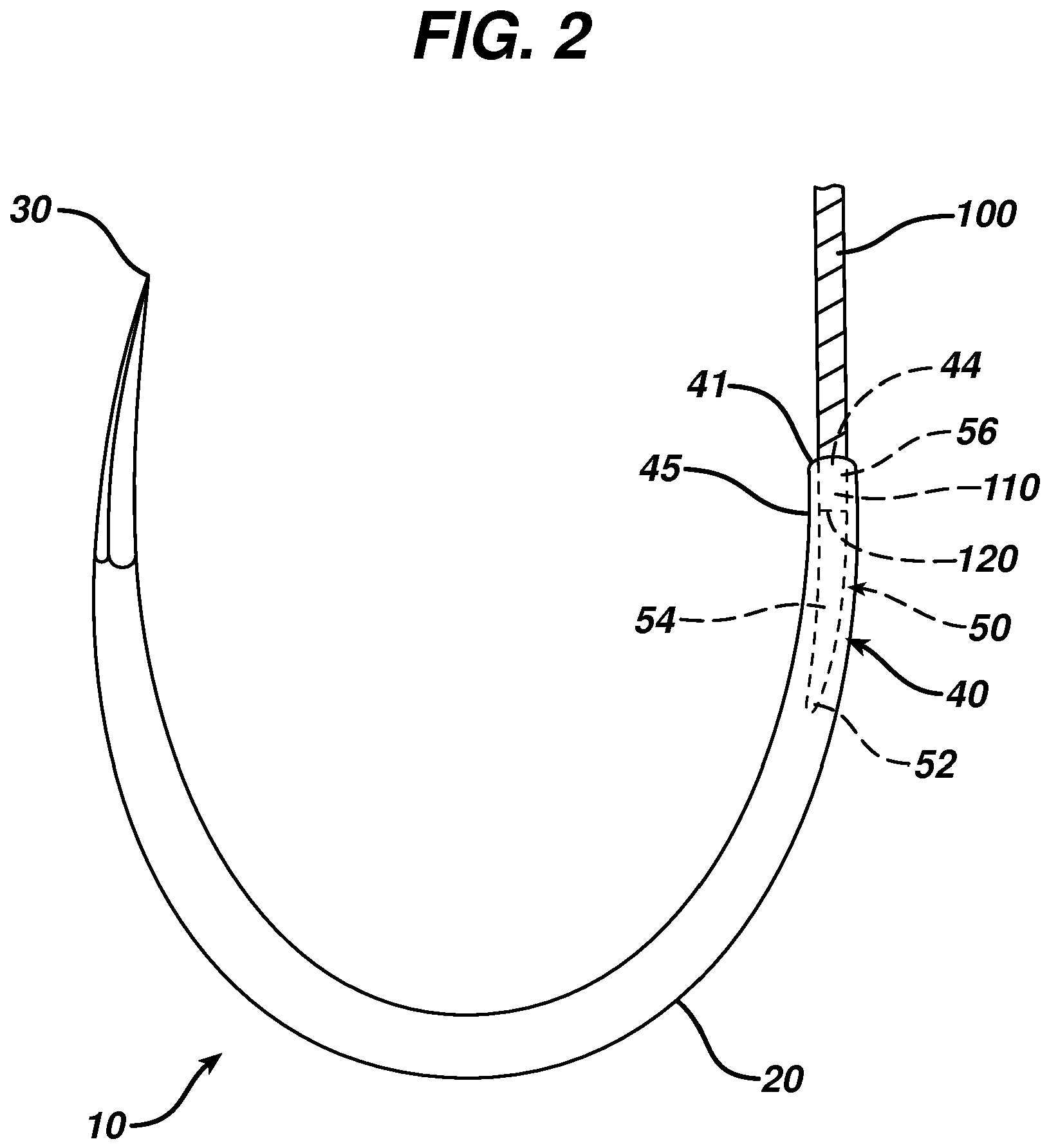 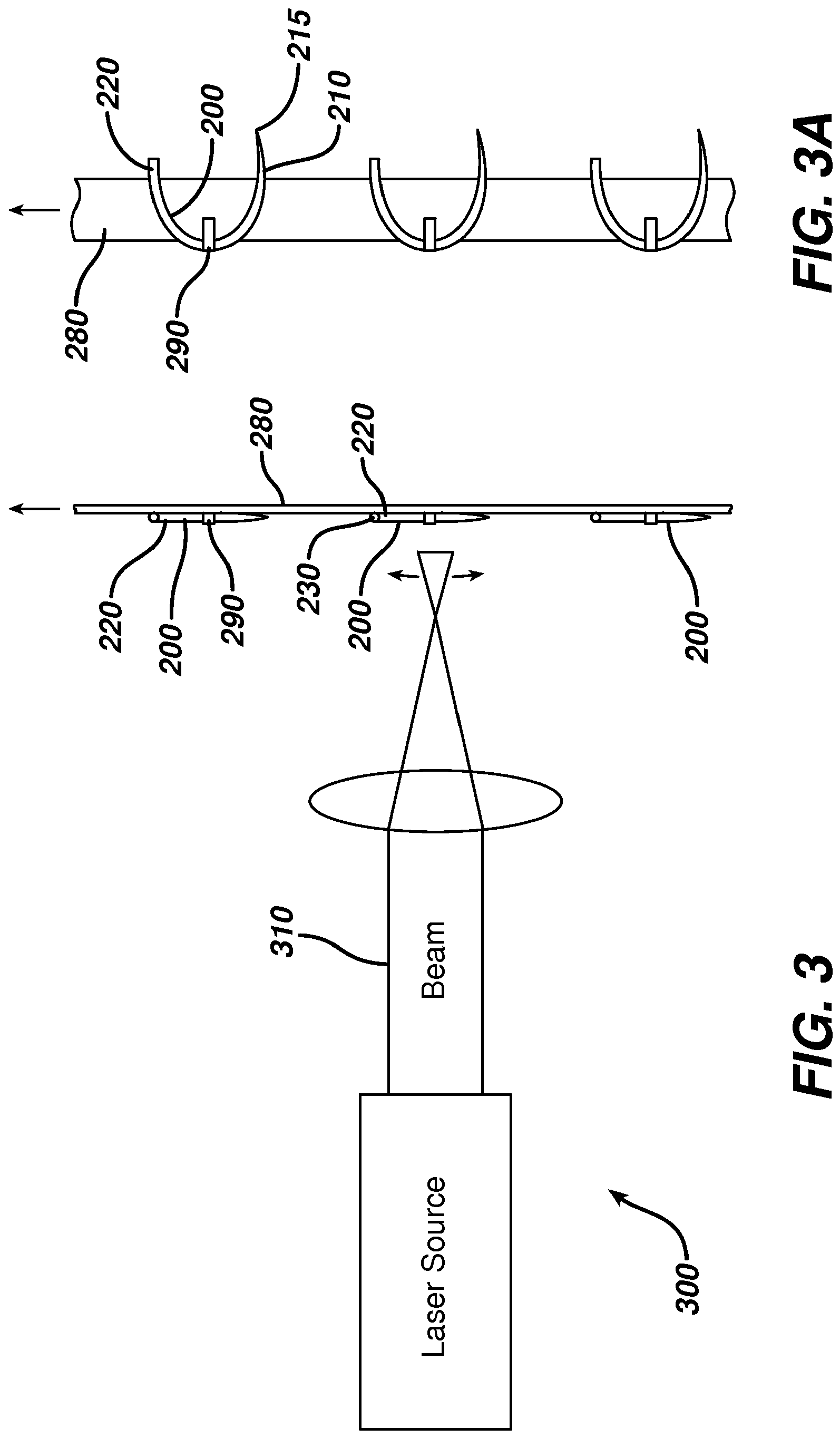