[0002] The present invention is directed to heat transfer labels. More particularly, the present invention relates to markable heat transfer labels that contain fixed and variable regions and are applied to articles to provide unique markings, and methods for making such markings.
[0003] Data and graphics-containing labels are in widespread use in most every industry. Labels are used to mark products and typically include both fixed and variable data. For example, fixed data can include the manufacturer's name, location, and instructions, while variable data may include the size of the product, composition of the material, model number, serial number, and/or power (voltage and ampere) requirements.
[0004] Heat transfer labels in particular are used to decorate, mark, code, and/or brand rubber products such as hoses, power transmission belts, and tires (hereafter "substrates"). Typically, heat transfer labels consist of ink color layers that adhere to substrates upon application of heat and pressure. Customers often require information such as that listed above as well as production lot data, date, and/or code information and the like (hereafter "variable data") to be incorporated into the product decoration for traceability purposes. The heat transfer label can be made with day/month/quarter/year code or any other code depending on customer preference. In many instances, such information is included in pre-printed heat transfer labels, such as those manufactured by ITW Trimark.
[0005] One drawback to the use of pre-printed labels with variable data or graphics, however, is that large inventories of completely finished pre-printed labels are needed at the manufacturing or packaging site. While this approach provides desirable information on an item-attached label, the large label inventory that is needed, in conjunction with the space necessary for storing such an inventory, makes this approach undesirable. This also increases the likelihood of label obsolescence. As such, there may well be a large quantity of completely finished labels in inventory when a product is changed or discontinued. The heat transfers then become perishable items that cannot be used after the specific date or time-period pre-printed on the heat transfer has lapsed. As it is extremely difficult for customers to pre-determine their exact requirements, existing practice inevitably leads to significant quantities of un-used heat transfer labels being disposed of at considerable cost. US 2003/0035933 discloses a method for marking labels.
[0006] Accordingly, there is a need for a variable data heat transfer label that provides the flexibility to mark variable data or graphics on site, e.g., modify data or graphics on site, immediately prior to applying the label to the product substrate. Such heat transfer labels would be easy to modify and be non-perishable for date or code reasons. Desirably, such a label includes some manner of fixed data and a modifiable region in which the variable data is provided and through which the data is viewed when the label is affixed to an object or item.

[0008] The benefits and advantages of the present invention will become more readily apparent to those of ordinary skill in the relevant art after reviewing the following detailed description and accompanying drawings, wherein:

FIG. 1 is a bottom view of a heat transfer label having a solid block of ink;

FIG. 2 is a bottom view of a heat transfer label after variable data or graphic has been punched or etched into the solid block of ink;

FIG. 3 is a top view of a heat transfer label as applied to a substrate with an ink portion of the label punched through, etched into, or selectively removed from the label;

FIG. 4 is a flow chart of an embodiment of a method of making the heat transfer label; and

FIG. 5 is a flow chart of another embodiment of a method of making the heat transfer label.

1. A method for making a modifiable heat transfer label (100), the method comprising:

the support surface includes a portion (114) for at least one of fixed data and fixed graphics. 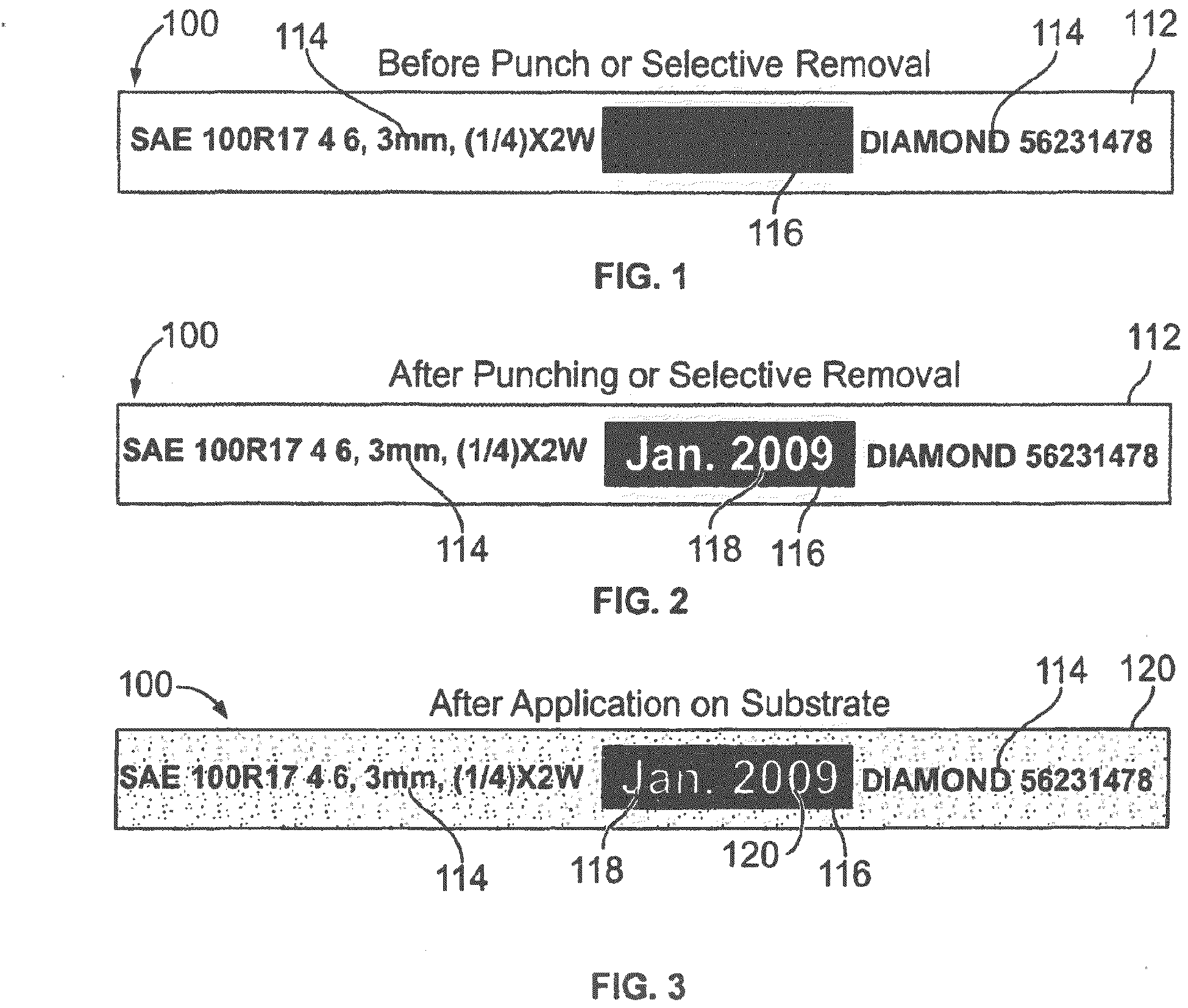 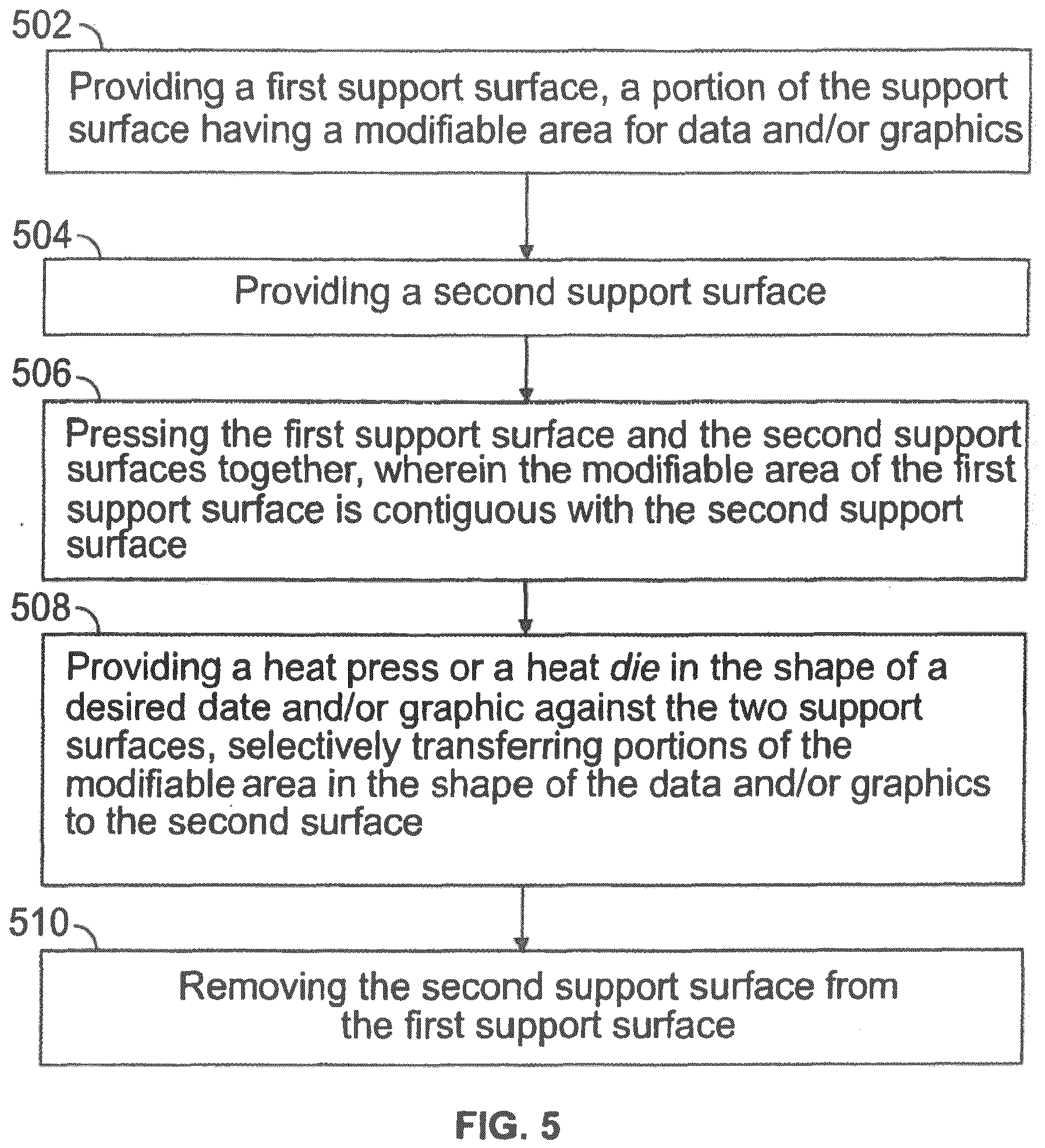