[0001] This invention generally relates to the protection of structural systems against dynamic loading such as loading caused by earthquakes or caused by impact from oceanic waves, vibrations from traffic, machines or impact of the wind. More specifically the invention relates of substantially horizontal movement of structures and in particular to the dampening of torsion in building structures.

[0002] When a structural member is excited by a horizontal external force, torsion or similar horizontal movement may occur. Torsion, especially in high building structures or towers may have serious impact on the conditions of the structure or even result in a collapse.
[0003] Dampers play an important role in the protection of structures, e. g. houses or similar building structures, and they exist in numerous variants. Dampers are typically dampening the motion by means of a frictional force between two moving parts attached between structural members of the building or by means of a fluid being pressed to flow between two chambers through a restricted tube. Some dampers are actively changing the dampening effect corresponding to external conditions, and other dampers are passive dampers having a constant dampening characteristic. Typical dampers are costly to produce and even more costly to assemble into a structural member of a building.
[0004] Typically a building have to be designed for a specific damper, either due to the bulky design of the existing dampers or due to correlation between the structural characteristics of the damper versus the characteristics of the building.
[0005] Typically the existing dampers are adapted to individually dampen movement of the vertically mounted structural members of building structures. This result in the dampening of the movement of individual parts of the building in relation to other parts of the same building, which dampening may protect e. g. a building from collapsing. However, if the entire building is moved horizontally, e. g. rotationally, the building may be damaged severely, even though the individual structural members of the building is being dampened individually. Horizontal movement may occur e. g. if the foundation of a building is displaced by an earthquake or by similar vibrations transmitted through the ground.
[0006] US 4,480, 731 discloses a vibration damping apparatus incorporated in the crossing of diagonal members such as braces of a framed structure for damping vibration imparted by external force such as an earthquake or a strong wind. The apparatus comprises a plurality of rotatable members or discs, a resistive body disposed between the discs, and a pair or pairs of link bars causing relative rotation of the discs in response to the impartation of the external force, whereby the vibration is damped by the resistance force of the resistive body resisting to the external force.

[0045] Embodiments of the invention will now be described in details with reference to the drawings. Figures 1-17 as well as figures 19-22 show embodiments not according to the invention.

Fig. 1 shows a device for base isolation the device comprising four dampers,

Fig. 2 shows a side view of a system with a damper connecting a structural system to a foundation,

Fig. 3 and Fig. 4 show the mechanism of the dampers when the base is rotating because of torsion,

Fig. 6 shows a specific configuration of the device for dampening movement of a machine,

Figs. 7,8 and 9 shows three alternative embodiments of the device shown in Fig. 6,

Fig. 10 shows an embodiment of the device comprising a sliding member,

Figs 11 and 12 shows alternative embodiments of the device shown in Fig. 10,

Fig. 13 is a perspective picture of a friction damper device according to the present invention,

Fig. 14 shows a steel frame with a friction damper device,

Fig. 15 shows the mechanism of the damper for dampening movement of a frame,

Fig. 16 shows the flexibility of using the friction damper in different types of bracing systems,

Fig. 17 shows a damper with to side members and a central plate and two pieces of a visco-elastic material,

Fig. 18 shows a damper according to an embodiment of the invention being similar to the damper of Fig. 17, but further including two pieces of a friction material,

Fig. 19 shows the damper of Fig. 18, further including two pieces of a third material, e. g.

a disc made of brass,

Fig. 20 shows the damper of Fig. 18, further including two pieces of a piezoelectric material,

Fig. 21 shows the damper device used in a cable stay bridge, and

1. A device (1402) for damping movements of structural and non structural elements (1418) in civil engineering structures, the device comprising:

- a first piece of a visco-elastic material (133) in a joint for visco-elastic damping of relative movement between the side plates (134),

- means (1413) for connecting each of the two side plates (134) to respective ones of the structural elements (1418), characterised in that

- the two side plates (134) are arranged symmetrically around the central plate (131),

2. A device according to claim 1, wherein the clamping means (132, 135, 135, 137) are adapted to vary the clamping force and thus the applied compressive force against the visco-elastic material (133).

3. A device according to claim 1 or 2, wherein the visco-elastic material (133) is adapted to change the damping characteristic based on the compressive force applied.

6. A device according to claim 5, comprising a bolt (132), at least a portion of the bolt constituting the pin, the bolt having:

- a bolt member with a bolt head,

the clamping force being determined by the pretension of the bolt (132). 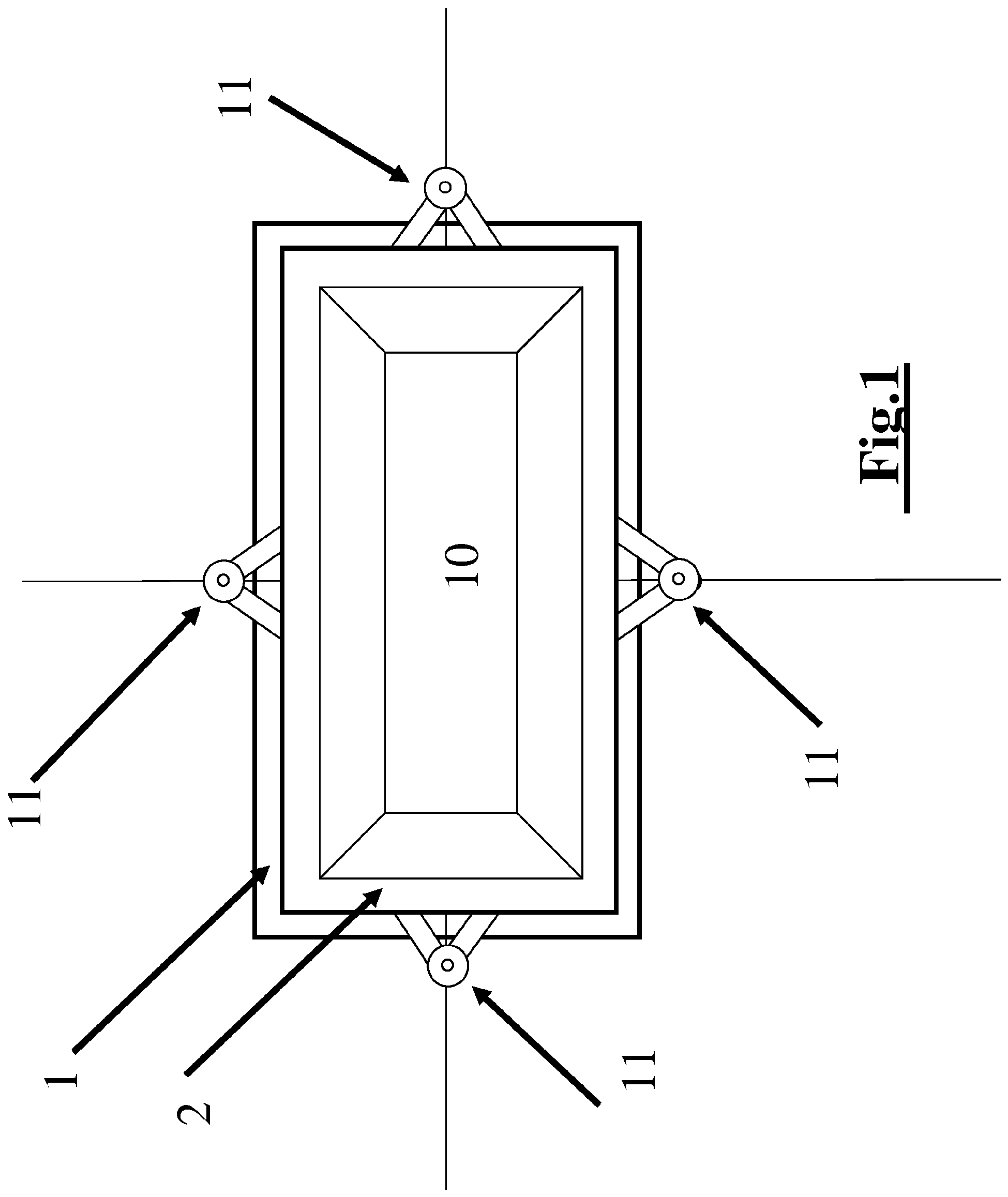 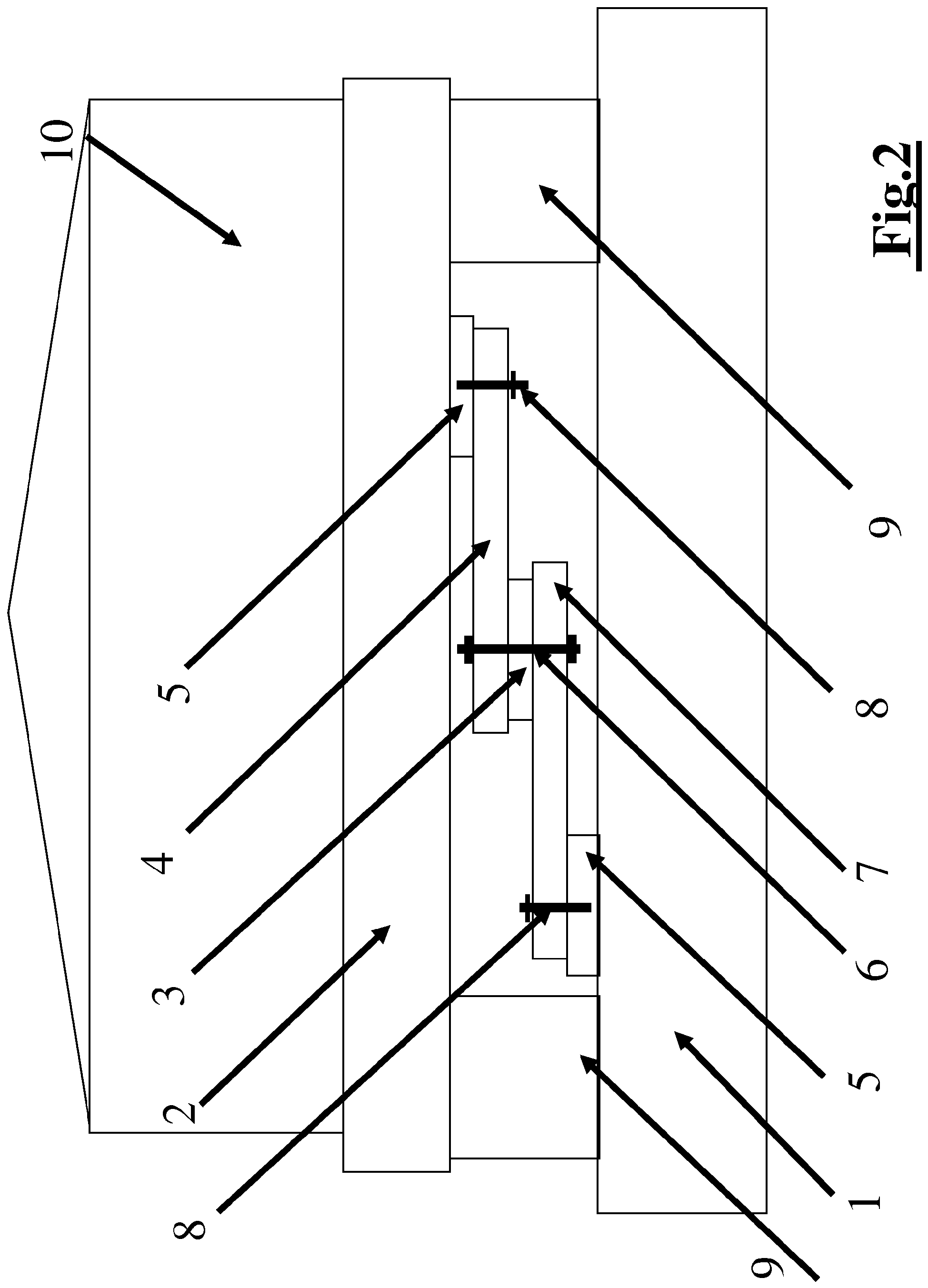 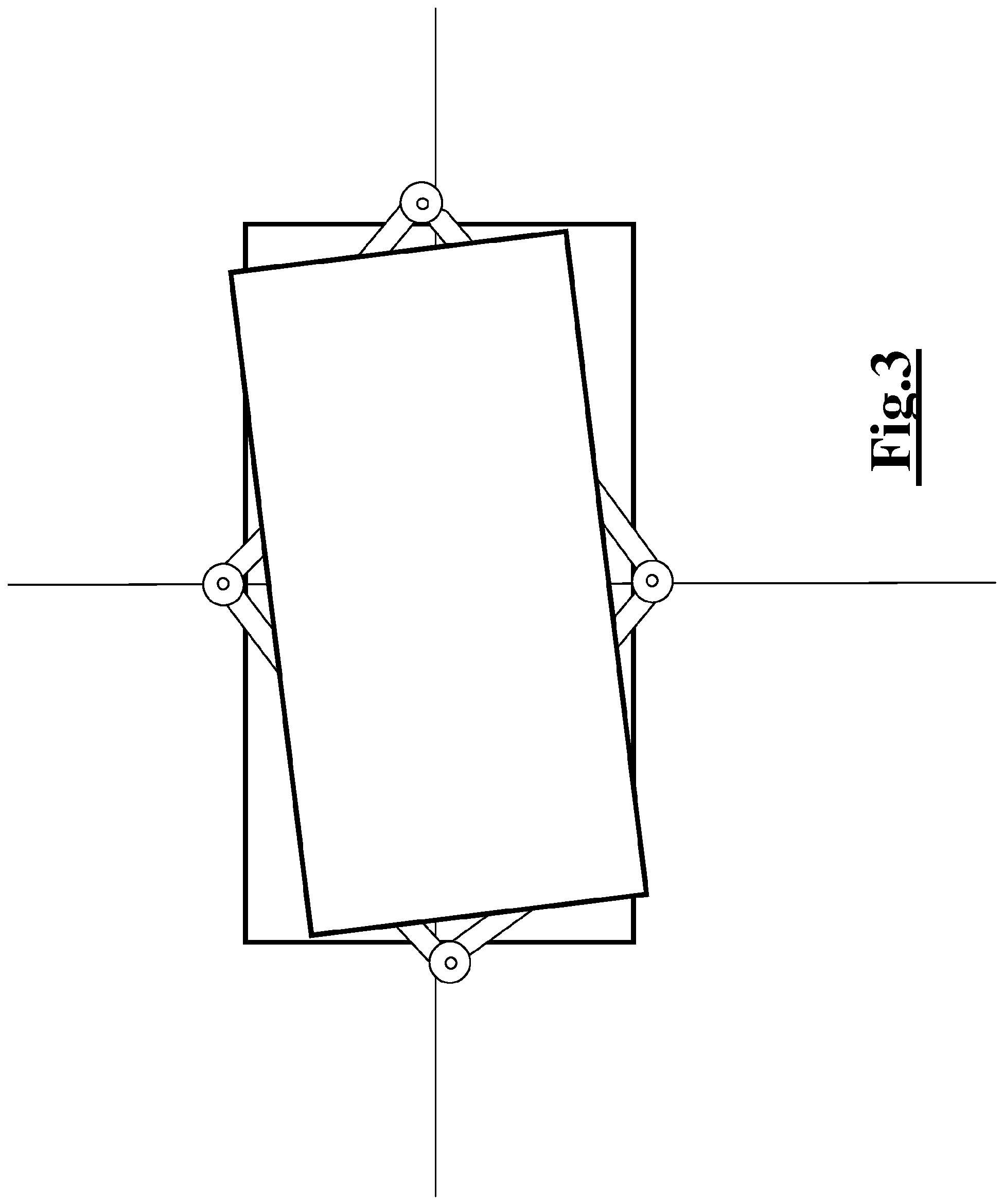 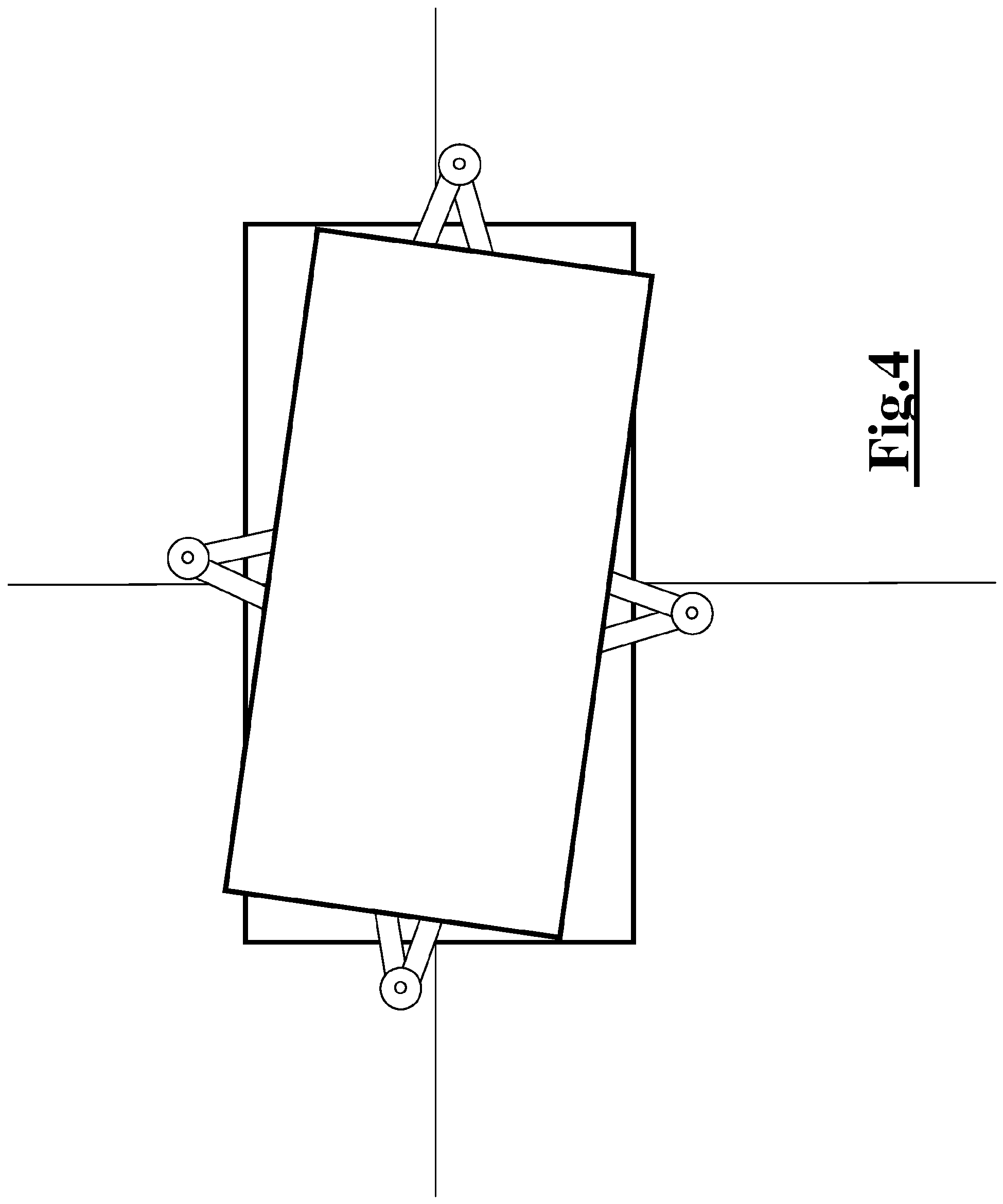 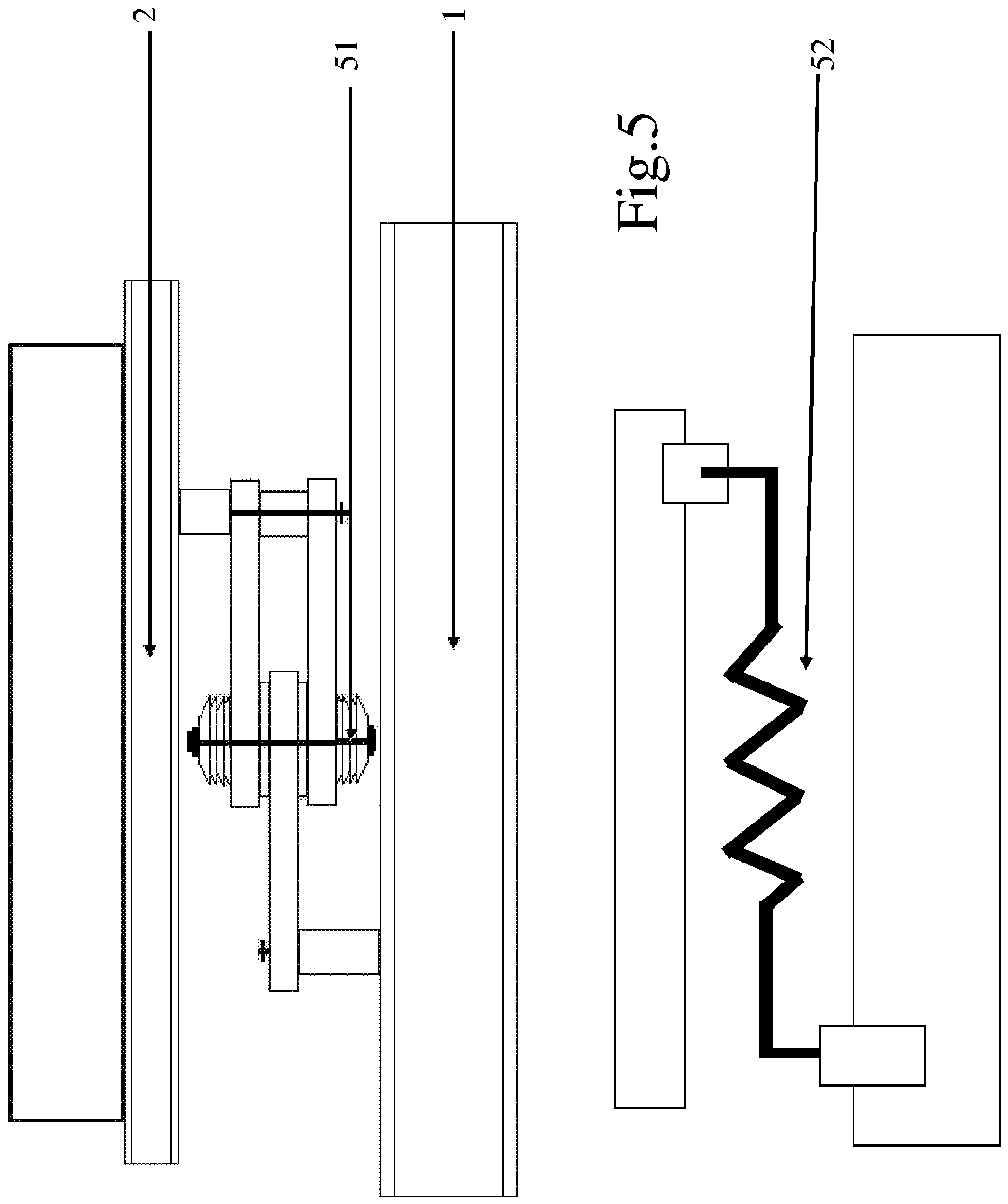 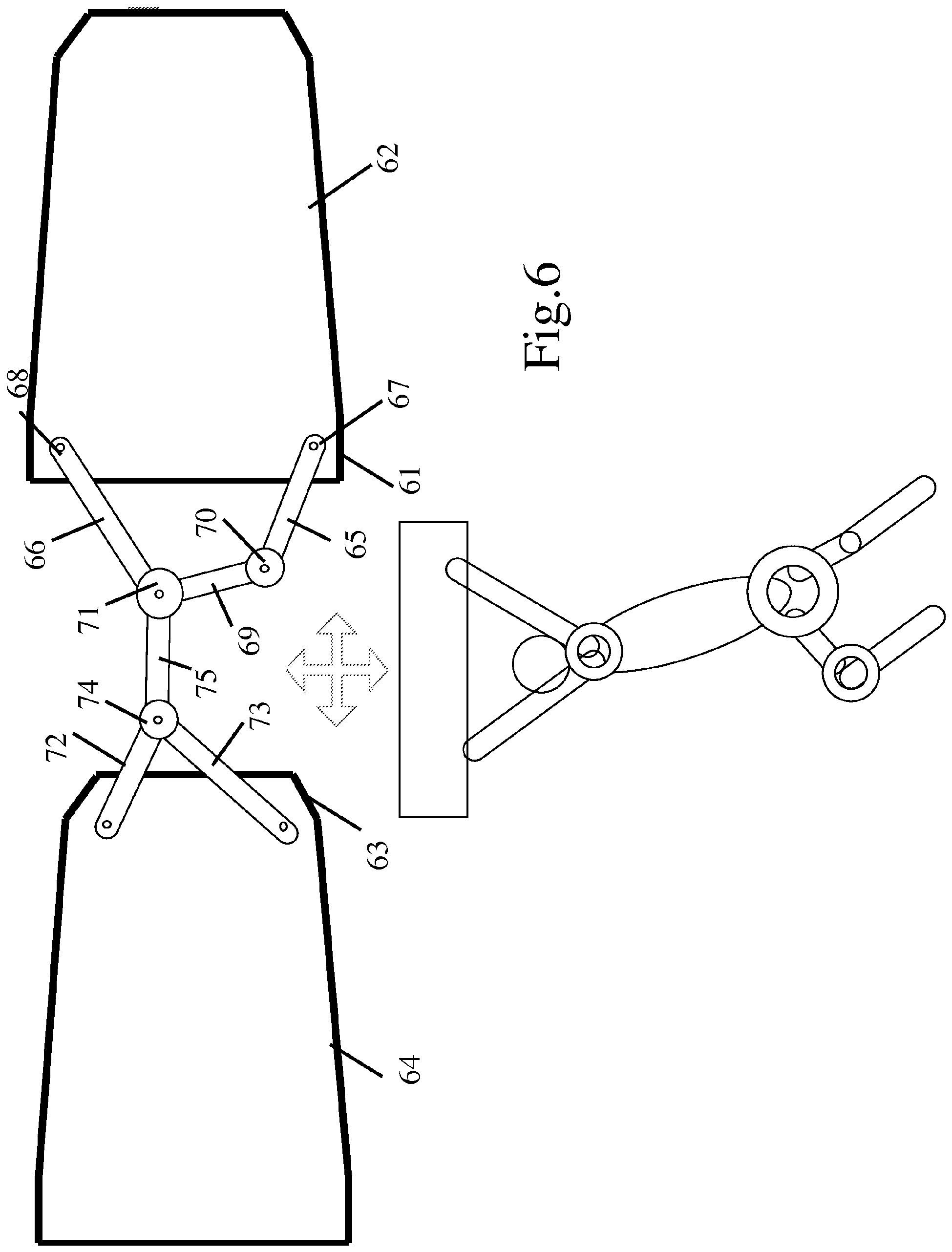 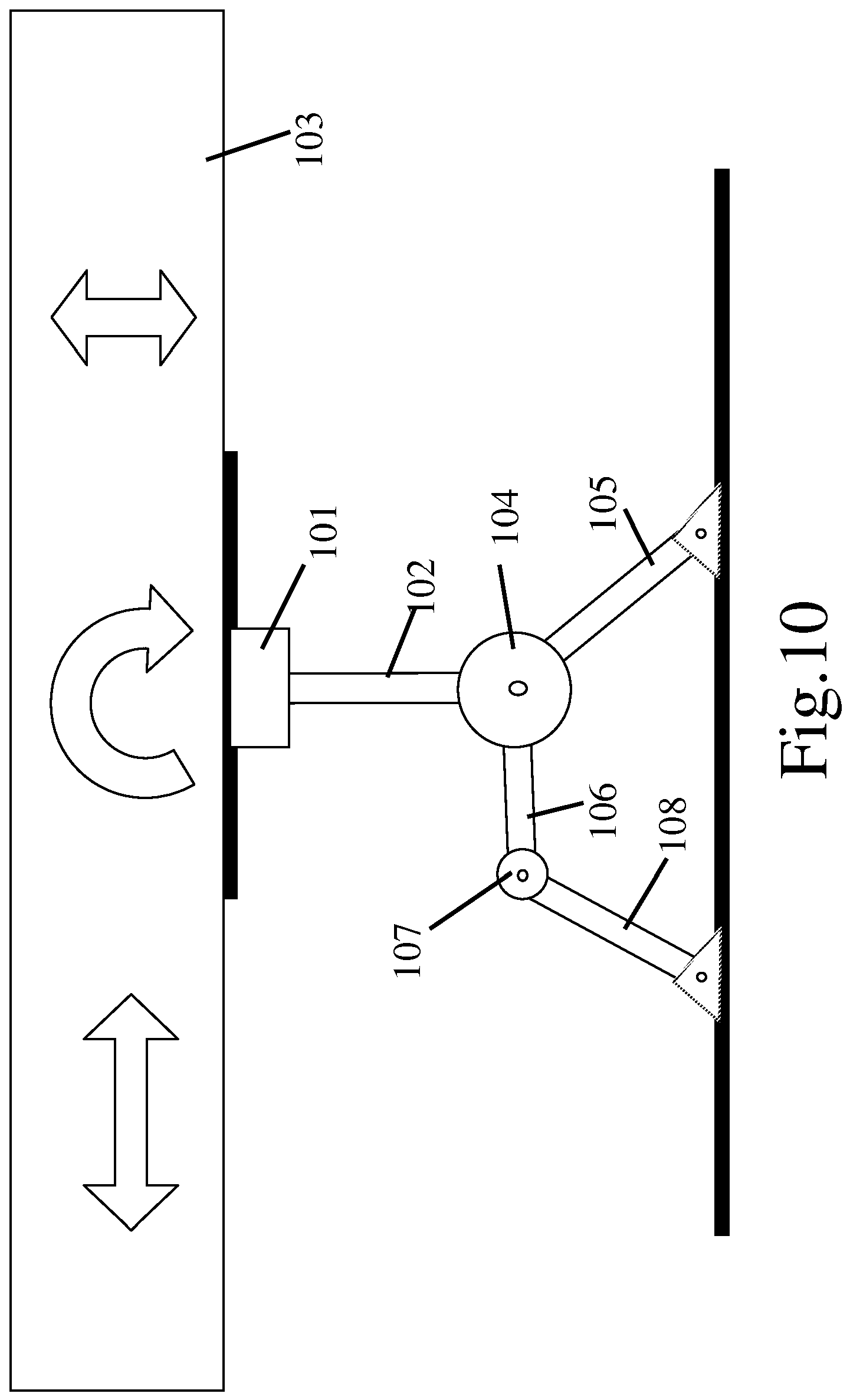 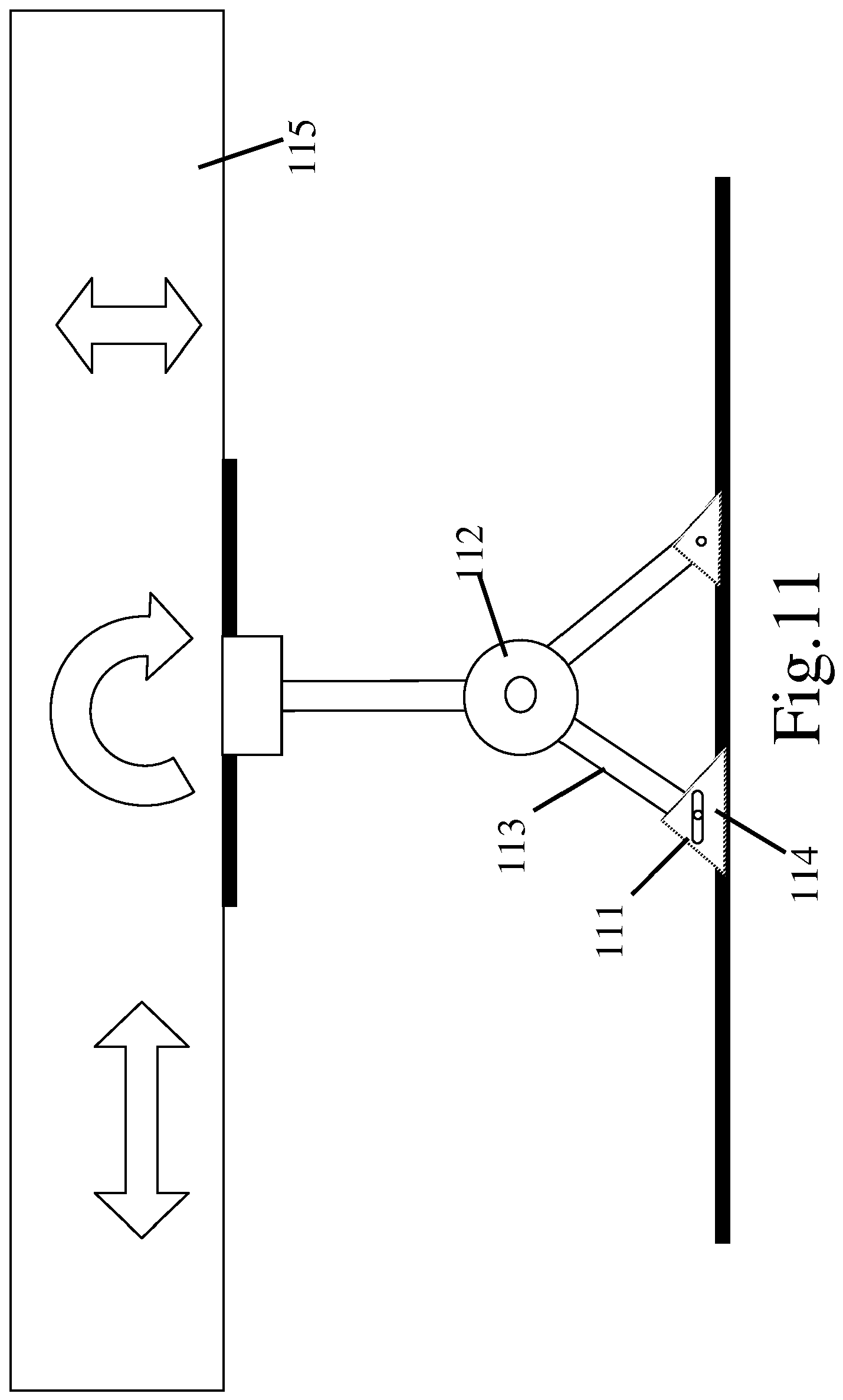 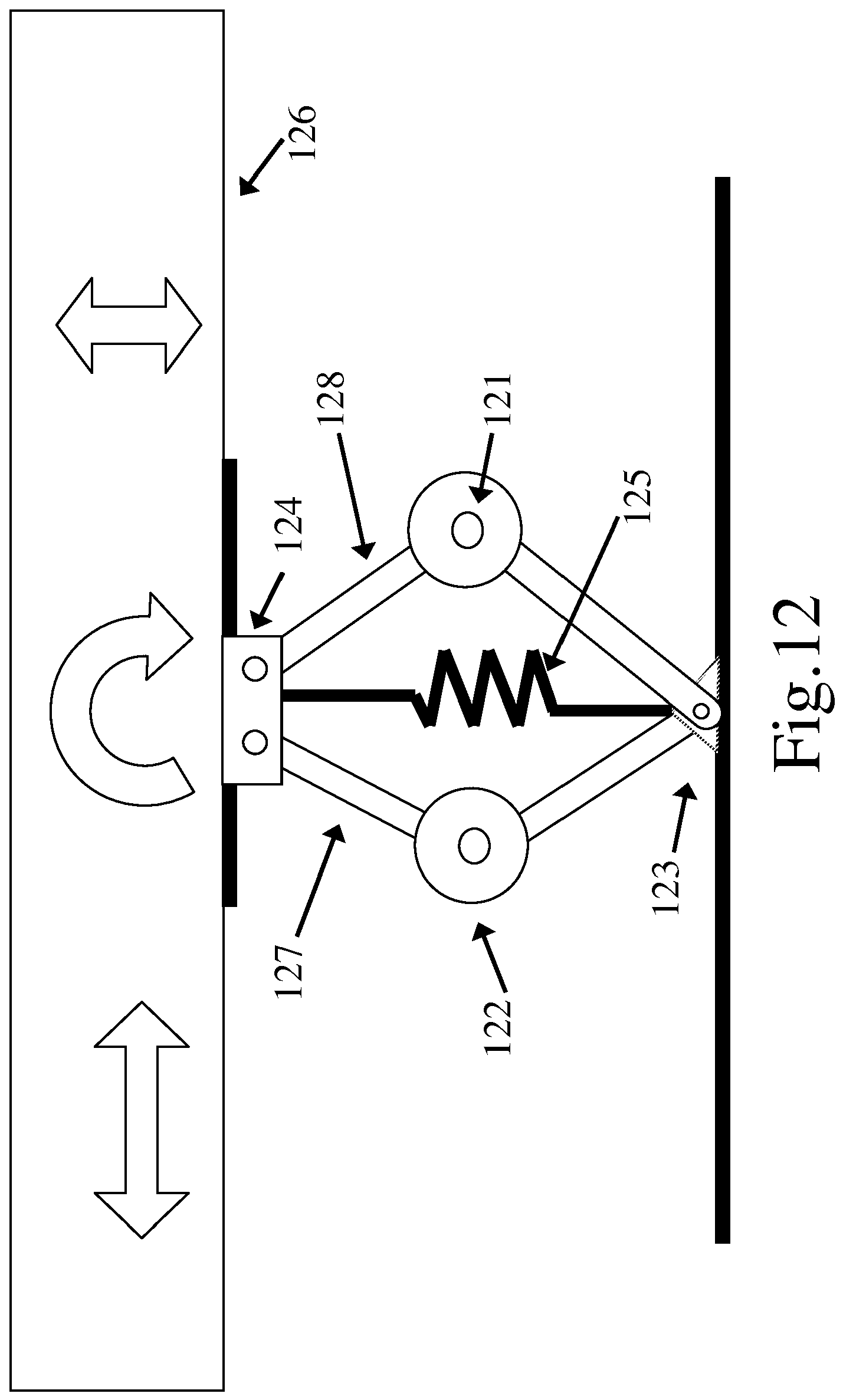 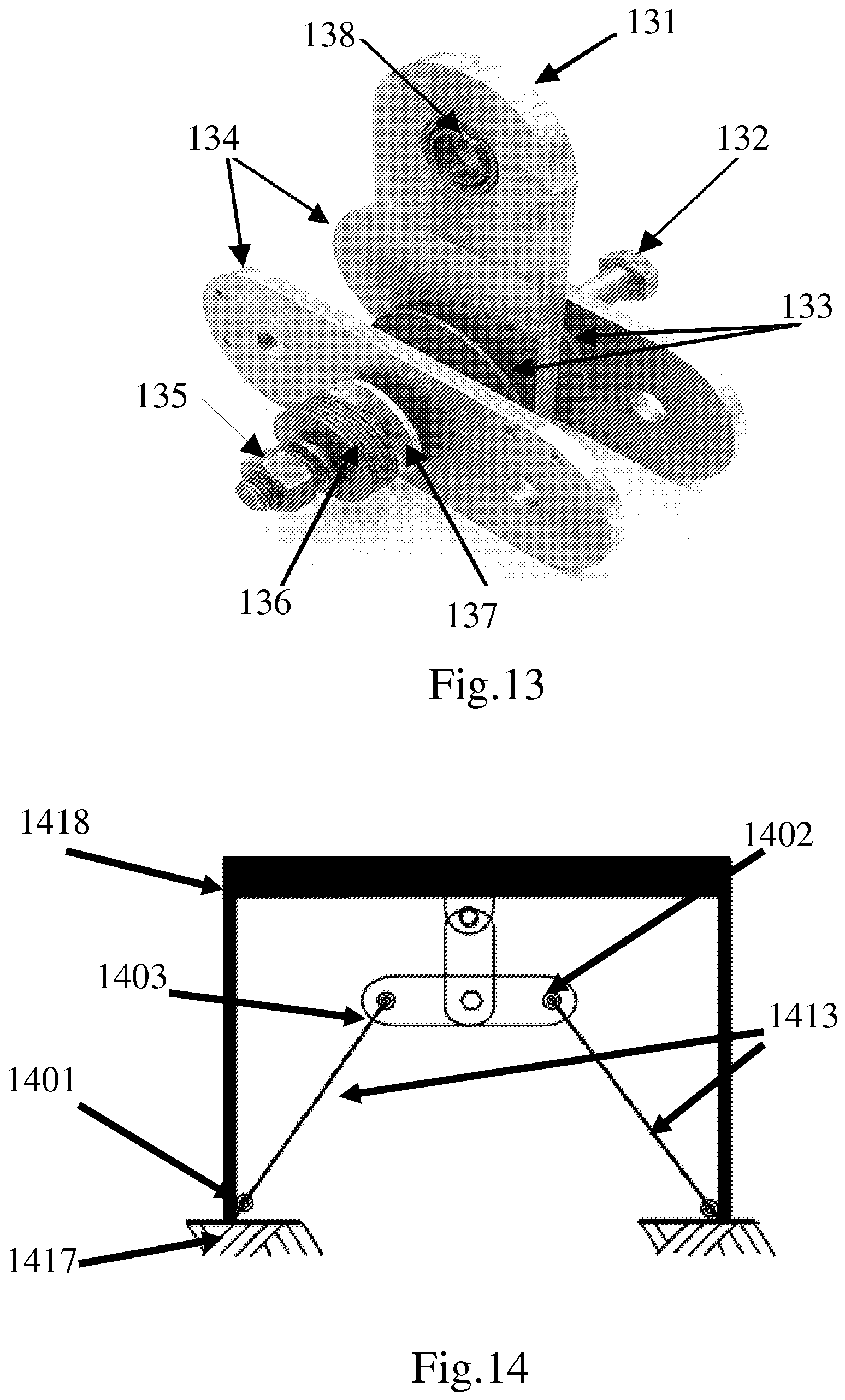 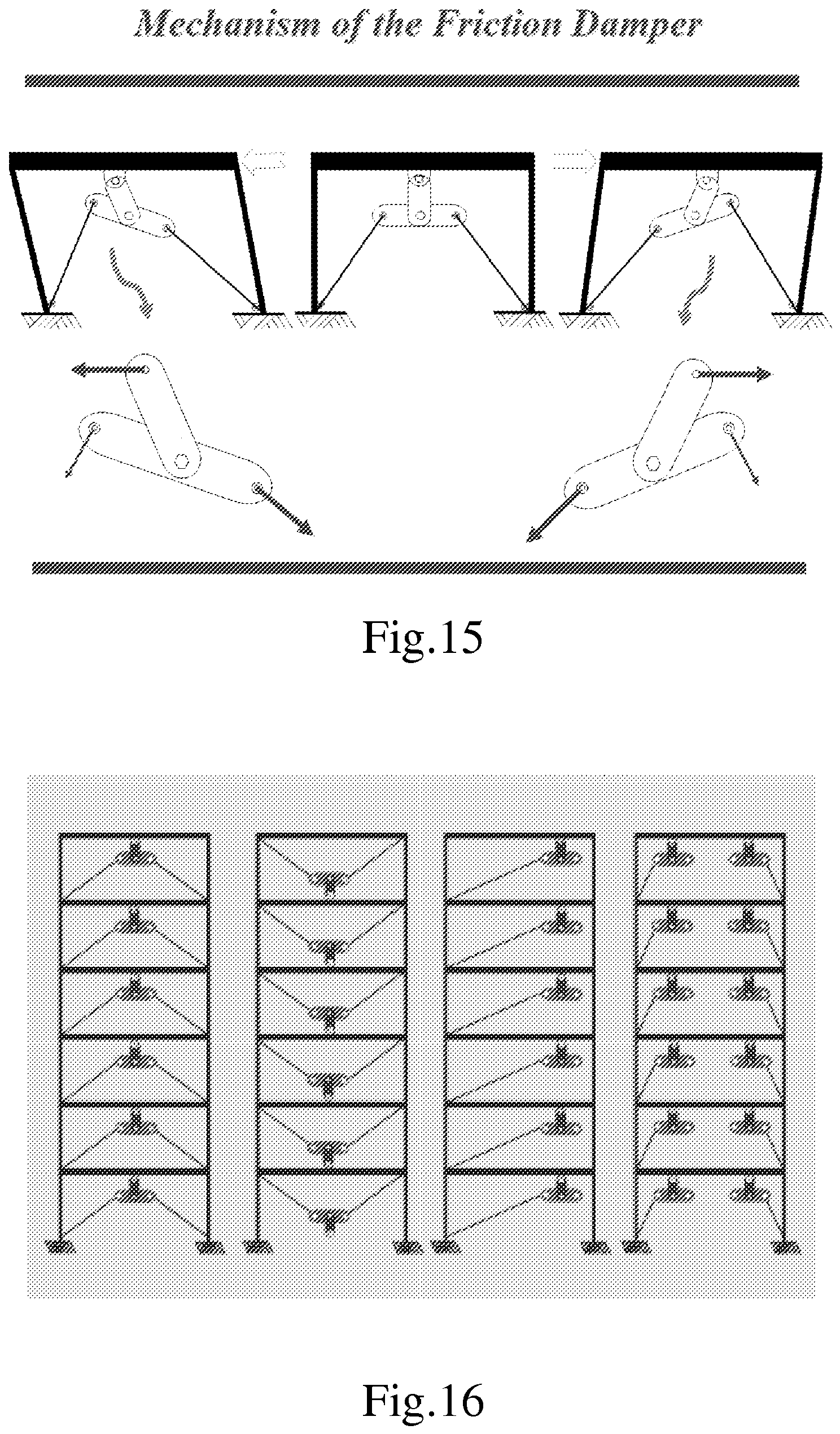 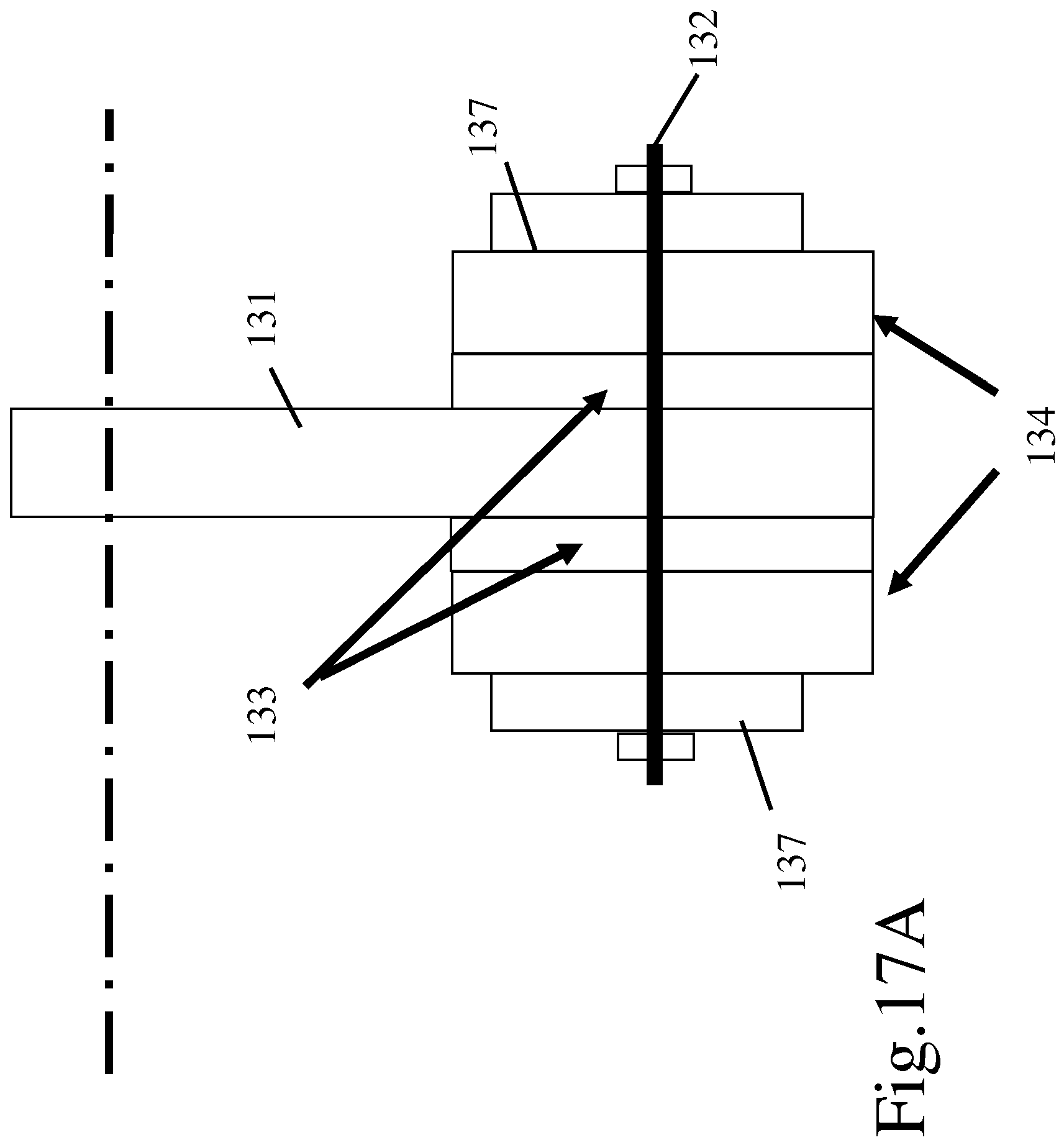 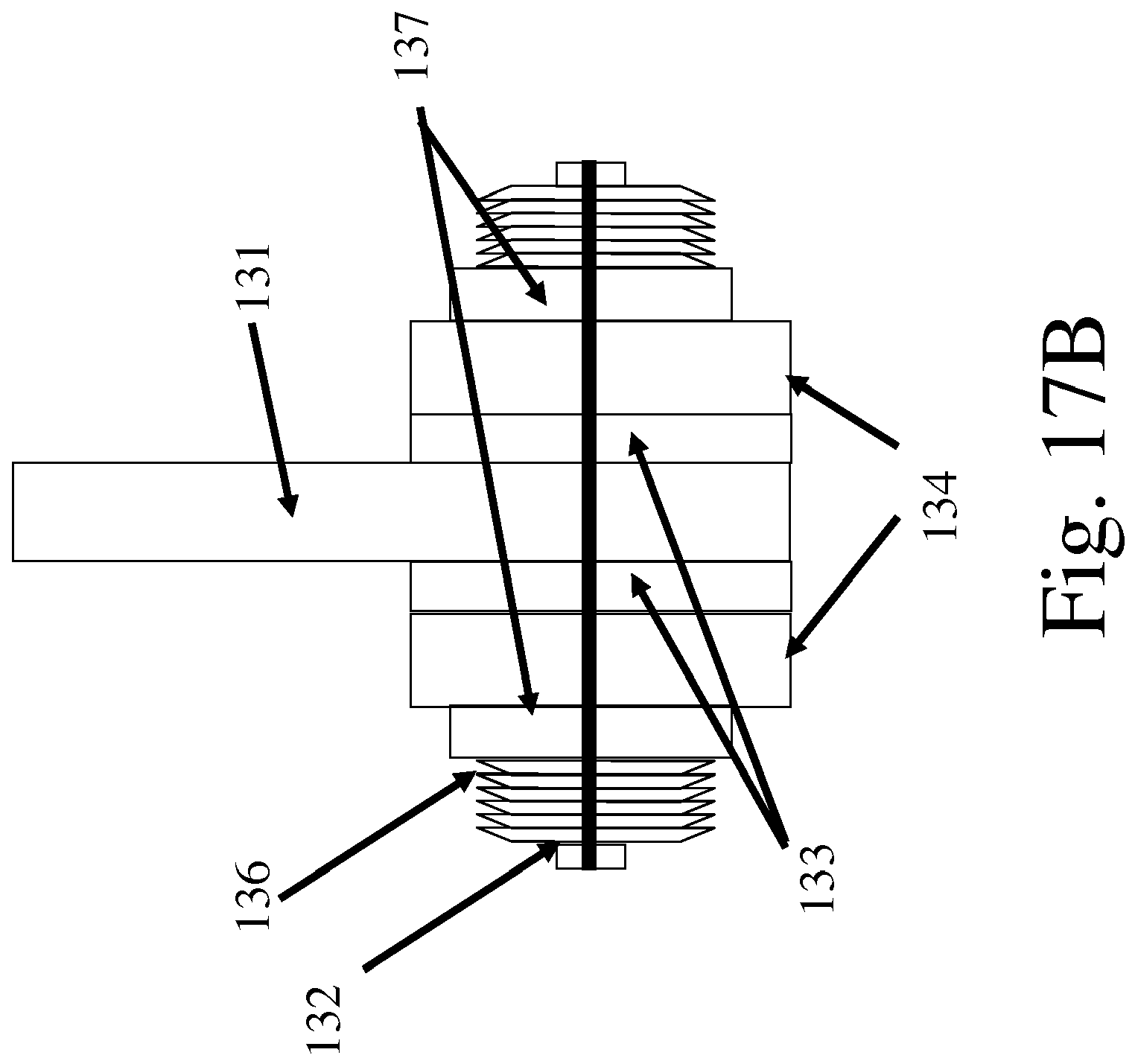 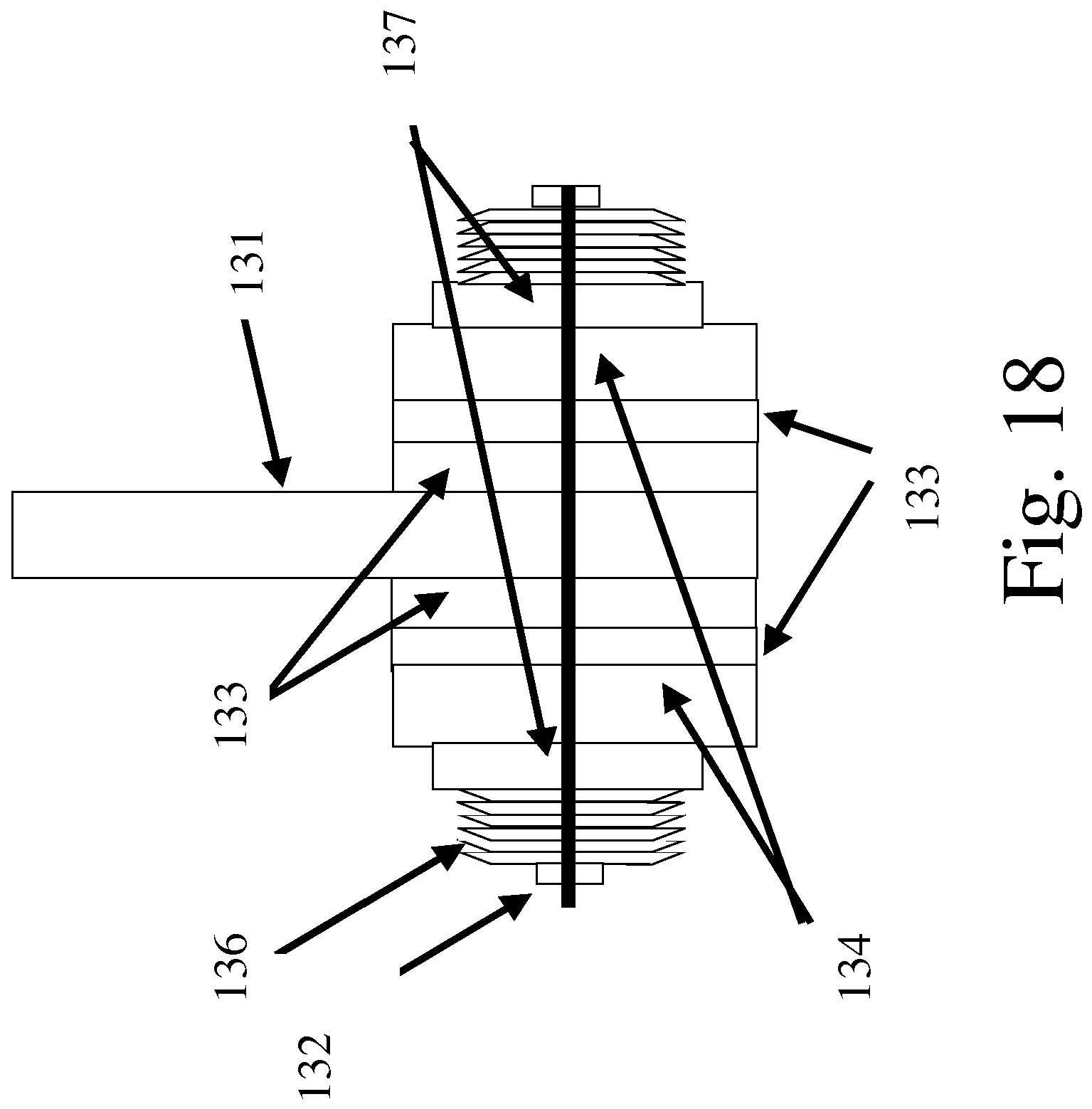 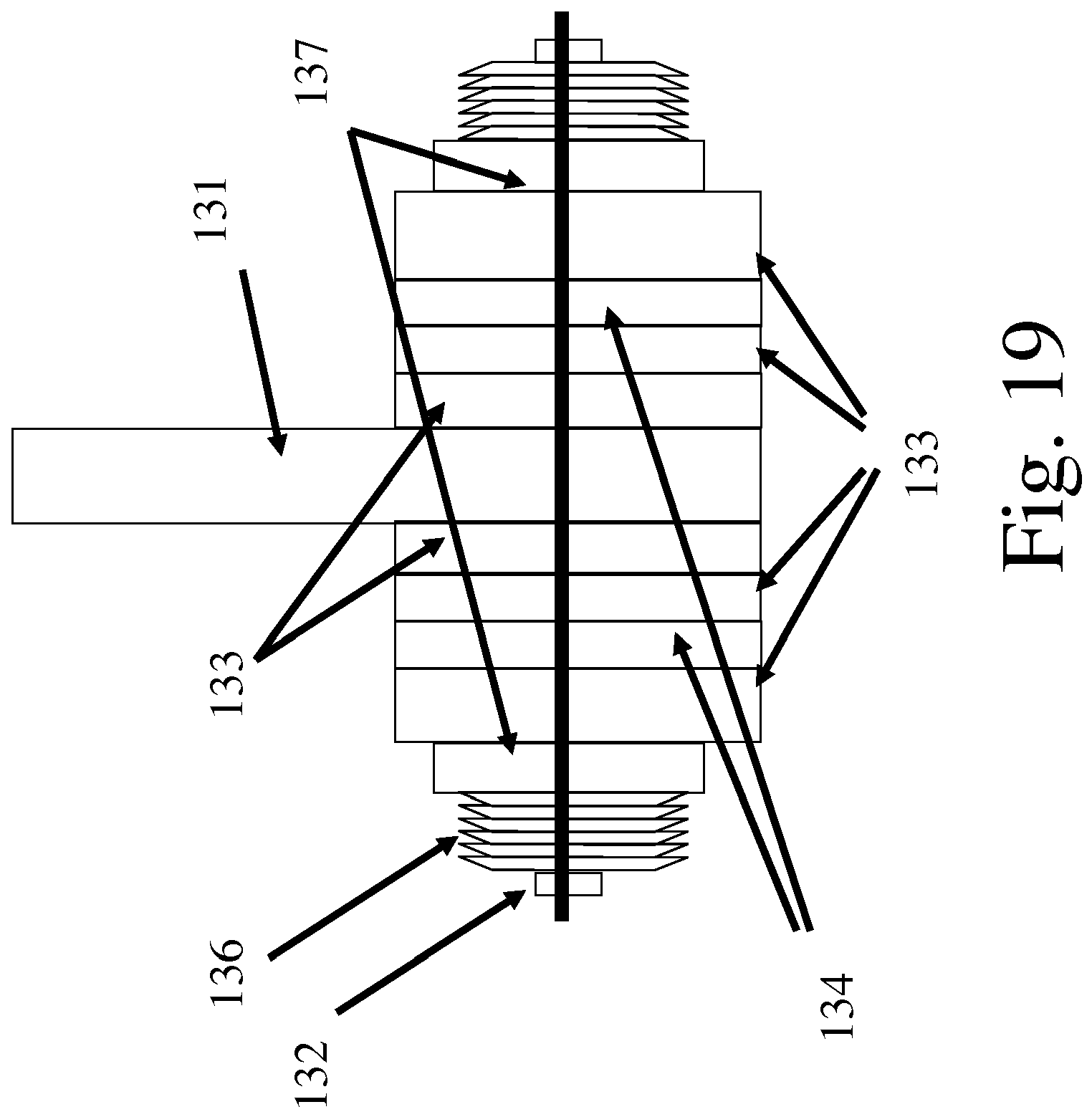 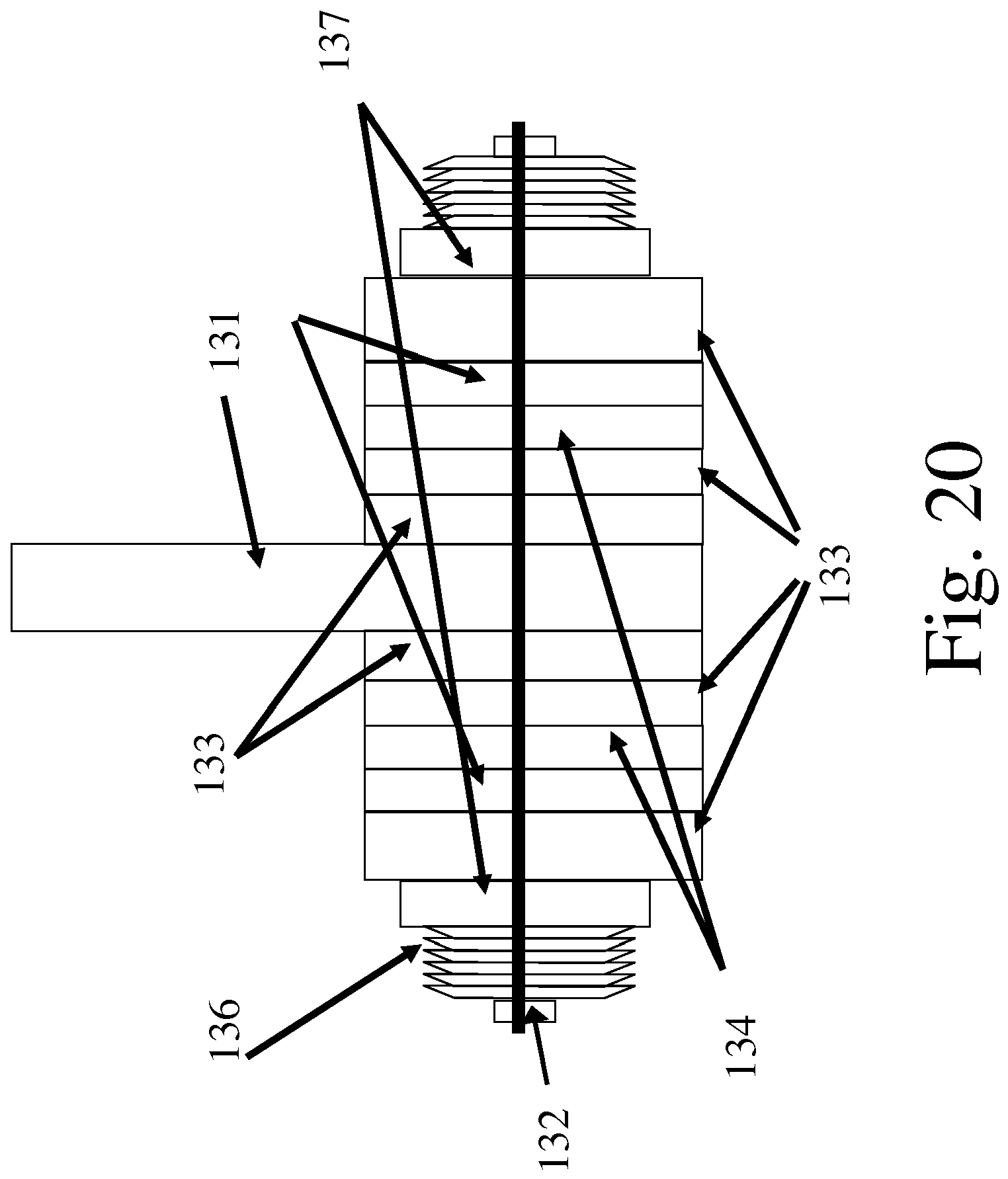 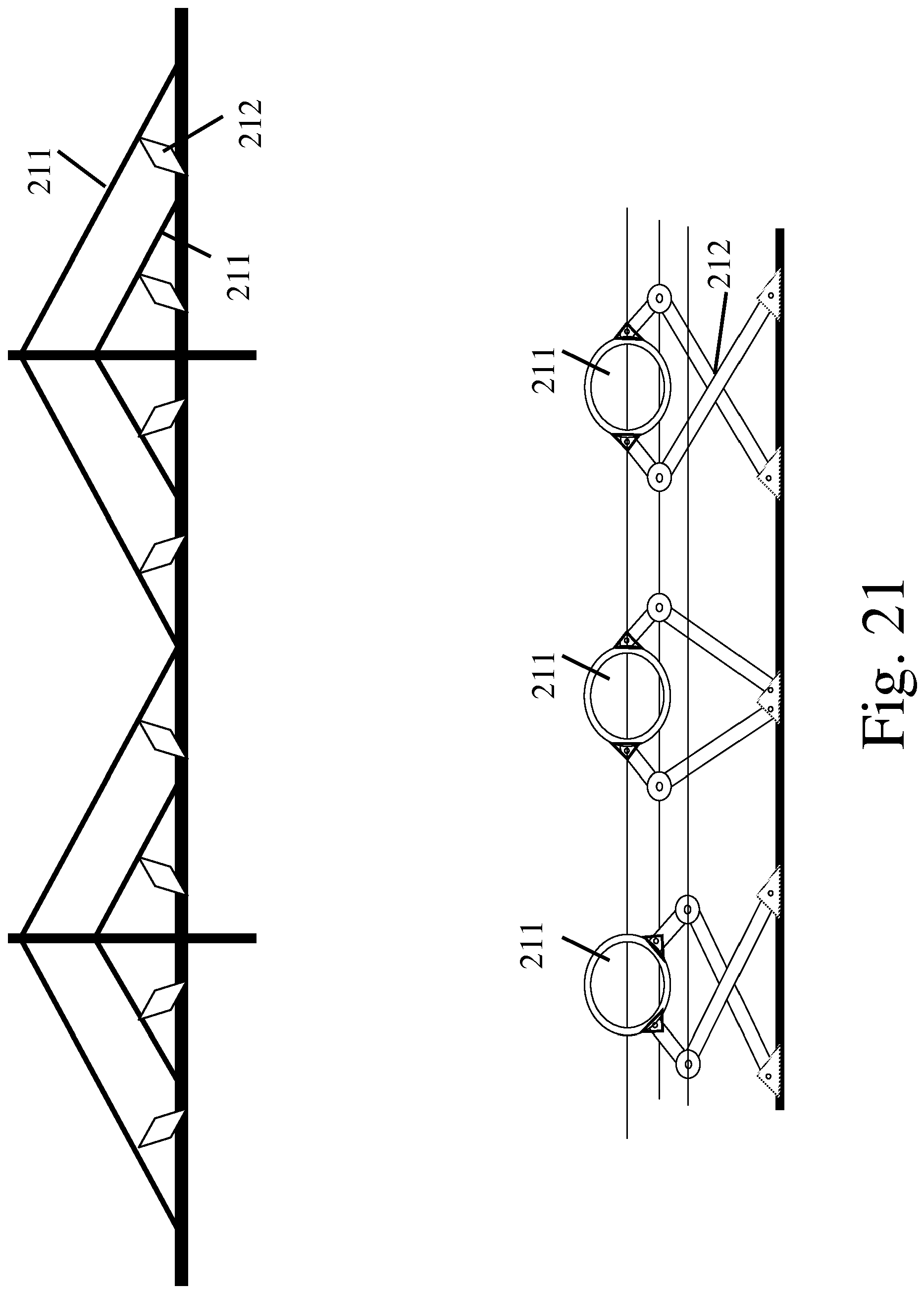 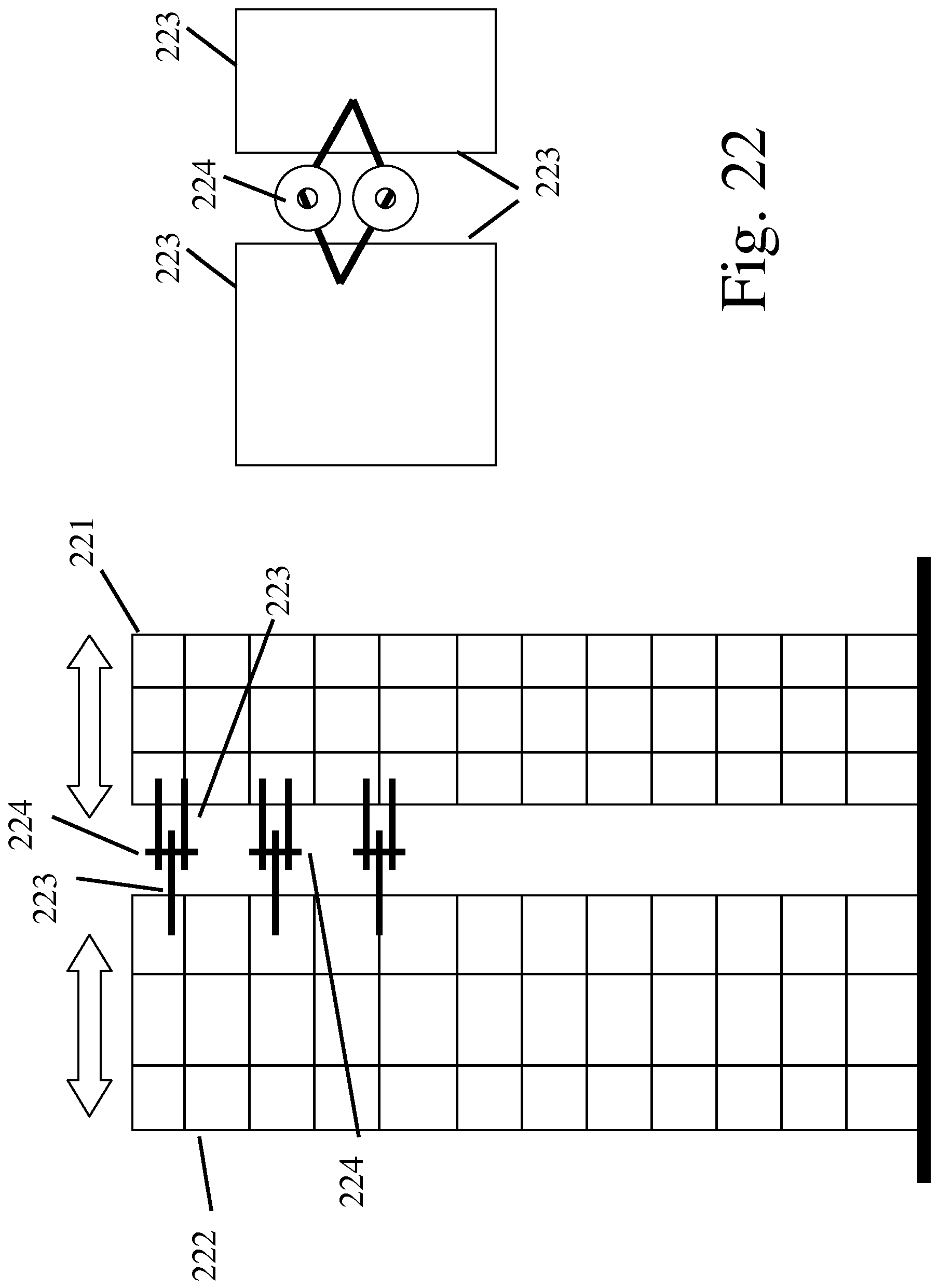