[0002] In particular, yet not restrictive manner, the invention concerns a mechanical locking system for rectangular floor panels with long and short edges. It should be emphasized that long and short edges are only used to simplify the description. The panels could also be square, they could have more than 4 edges and the adjacent edges could have angles other than 90 degrees. However, the invention is as well applicable to building panels in general. More particularly the invention relates mainly to the type of mechanically locking systems, which allow that angling of long edges and vertical movement of short edges could lock all four edges of a panel to other panels.
[0003] A floor panel of this type is presented in WO2006/043893, (figure 1a) which discloses a floor panel with a locking system comprising a locking element cooperating with a locking groove, for horizontal locking, and a flexible tongue (30) cooperating with a tongue groove (20), for locking in a vertical direction. The flexible tongue bends in the horizontal plane and snaps into the tongue groove during connection of the floor panels and makes it possible to install the panels by vertical snap folding or solely by vertical movement. Similar floor panels are further described in WO2003/016654, which discloses locking system comprising a tongue with a flexible tab. The tongue is extending and bending essentially in a vertical direction and the tip of the tab cooperates with a tongue groove for vertical locking.
[0004] Vertical locking and vertical folding of this type creates a separation pressure at the short edges when the flexible tongue or flexible parts of the tongue are displaced horizontally in a double action during the angling of the long edges. Parts of the tongue are displaced inwardly during the initial part of the locking and they are thereafter displaced towards the initial position during the final part of the locking action. The inventor has analysed several types of floor panels and discovered that there is a considerable risk that the short edges could be pushed away from each other during installation and that a gap could occur between the edge portions of the short edges. Such a gap could prevent further installation and the floor panels will not be possible to connect. It could also cause serious damage to the locking system at the short edges. Pushing the floorboards sideways towards the short edges during installation could prevent the gap. Such an installation method is however complicated and difficult to use since three actions have to be combined and used simultaneously in connection with angling down of the long edges.
[0005] It is also known, as shown in figure 1b that two adjacent short edges in a first row could be locked with a displaceable tongue (30), which is displaced and, for example, bended by a side push at one edge section (32) when the adjacent short edges have been folded down and positioned in the same plane. Such an installation is described in DE 102006037614 B3 and a pre published PCT application made by Välinge innovation AB. This vertical push folding, which generally is activated by a pressure from a long side of a third panel in a second row, displaces the separate tongue along the short edge joint but also perpendicular to the joint direction such that a part of the tongue is displaced into a groove of the adjacent short edge. This displacement perpendicular to the joint direction avoids the separation forces during the vertical folding but creates a separation force when the panels are laying flat on the sub floor and when the tongue is pressed into the tongue groove of the adjacent panel. This side push pressure parallel to the joint must be converted to a pressure force perpendicular to the edge and this is a disadvantage since a considerable part of the pressure will be lost and can not be used to create a strong locking force that brings the edges in the same plane in case that they are warped. Most vertical push folding systems, especially such systems that comprise a flexible tongue that bends in the length direction of the joint, are difficult to lock when the first and the last rows are installed. They are not suitable to lock wide panels. Some of these problems could be avoided with a wedge shaped tongue. Such wedge shape tongues consist generally of two parts or they are connected to grooves, which are not parallel with the edge. This leads to the fact that expensive materials or complicated production methods must be used.
[0006] JP 3110258 (Matsushita) discloses a raised floor for office buildings, e.g. in a computer room, with a high requirement of access to cables or pipes under the front face. The raised floor comprises units, which can be locked, after they have been positioned on the sub-floor, with a displaceable magnetic tongue, which is displaced from one groove in one edge of a unit to another groove in an adjacent unit with a magnetic force. Matsushita teaches that such floorings cannot be provided with tongues.

[0007] In the following text, the visible surface of the installed floor panel is called "front face", while the opposite side of the floor panel, facing the sub floor, is called "rear face". The edge between the front and rear face is called "joint edge". If not defined otherwise upper and lower mean towards the front face and towards the rear face, respectively. Inner and outer means towards or away from the centre of the panel. By "horizontal plane" is meant a plane, which extends parallel to the outer part of the surface layer. Immediately juxtaposed upper parts of two adjacent joint edges of two joined floor panels together define a "vertical plane" perpendicular to the horizontal plane. By "horizontally" is meant parallel with the horizontal plane and by "Vertically" parallel to the vertical plane.
[0008] By "joint" or "locking system" are meant co acting connecting means, which connect the floor panels vertically and/or horizontally. By "mechanical locking system" is meant that joining can take place without glue. Mechanical locking systems can in many cases also be combined with gluing. By "integrated with" means formed in one piece with the panel or factory connected to the panel. By "separate" parts, components element and similar is meant that they are produced separately and not in one piece with the core or the main body of the panel. Separate parts are generally factory connected and integrated with the panel but they could be supplied as lose parts, which are intended to be used during installation of panels.
[0009] By a "separate tongue" is meant a tongue, which is made of a separate material, connected to one edges of a panel, which has a length direction along the joint edges and is forming a part of the vertical locking system.
[0010] By a "displaceable tongue" is meant any type of a tongue which connects adjacent edges vertically and which is made of a separate material and connected to a floor panel and which is wholly or partly displaceable between an unlocked position and a locked position. A displaceable tongue could be flexible or rigid
[0011] By "tongue" is generally meant a part in an edge section that extends beyond the upper edge and cooperates with a groove in an adjacent edge such that the edges are locked vertically. A tongue is generally made in one piece with the panel.
[0012] By "angling" is meant a connection that occurs by a turning motion, during which an angular change occurs between two parts that are being connected, or disconnected. When angling relates to connection of two floor panels, the angular motion takes place with the upper parts of joint edges at least partly being in contact with each other, during at least part of the motion.
[0013] By an "angling locking system" is meant a mechanical locking system which could be connected vertically and horizontally with angling comprising a tongue and a groove that locks two adjacent edges in a vertical direction and a locking strip with a locking element in one edge of a panel called "strip panel" that cooperates with a locking groove on another edge of a panel called "groove panel" and locks the edges in a horizontal direction. The locking element and the locking groove have generally rounded guiding surfaces that guide the locking element into the locking groove and locking surfaces that locks and prevents horizontal separation between the edges.
[0014] By "vertical folding" is meant installation of panels with angling of long edges where this long edge angling also is used to connect the short edges. By "vertical snap folding" is meant an installation where the short edges are locked with snapping of a flexible tongue during the final stage of the long edge angling. Such a locking system is not a pure combination of, for example, an angling locking system on a long edges and a vertical locking system on short edges since the vertical and the angling actions are combined and the short edges are folded together in the same way as scissors. The locking takes place gradually from one edge section adjacent to one long edge, which is angled, to the other edge section adjacent to the other opposite long edge. By "vertical push folding" is meant an installation where the short edges of two panels are locked when they are laying flat on a sub floor after the angling. The locking is obtained by a side push that displaces a separate tongue in the length direction of the short edges. The horizontal locking is in known fold down systems obtained in the same way as for the angling systems with a locking element in one edge of a strip panel that cooperates with a locking groove on another edge of a groove panel
[0015] By "vertical locking" is meant a locking that take place when two edges are displaced essentially vertically against each other.

Figs 6c show an embodiment of a floor panel, which is easy to disconnect, provided with a magnetic locking system

Figs 14b shows an embodiment of a magnetic locking system

Figs 15a-d show an embodiment of a magnetic locking system

Description of Embodiments of the Invention

1. A set of floor panels (1, 1') provided with a mechanical locking system comprising a tongue (30) at an edge of a first floor panel (1) cooperating with a tongue groove (20) in an adjacent edge of a similar second floor panel (1') for connecting the edges vertically in a second vertical (V2) direction , wherein the locking system comprises at one of the adjacent edges a protruding strip cooperating with the other adjacent (2) edge for locking of the first and the second panel in a first vertical (V1) direction,
characterised in

that the tongue(30) is slidable and comprises a magnetic material and that the locking system is configured to be activated by a magnetic field,

that the mechanical locking system comprises a tongue-locking device (7), and

that the tongue-locking device (7) comprises a flexible tongue section, which prevents displacement with a vertical pre tension against a groove part. 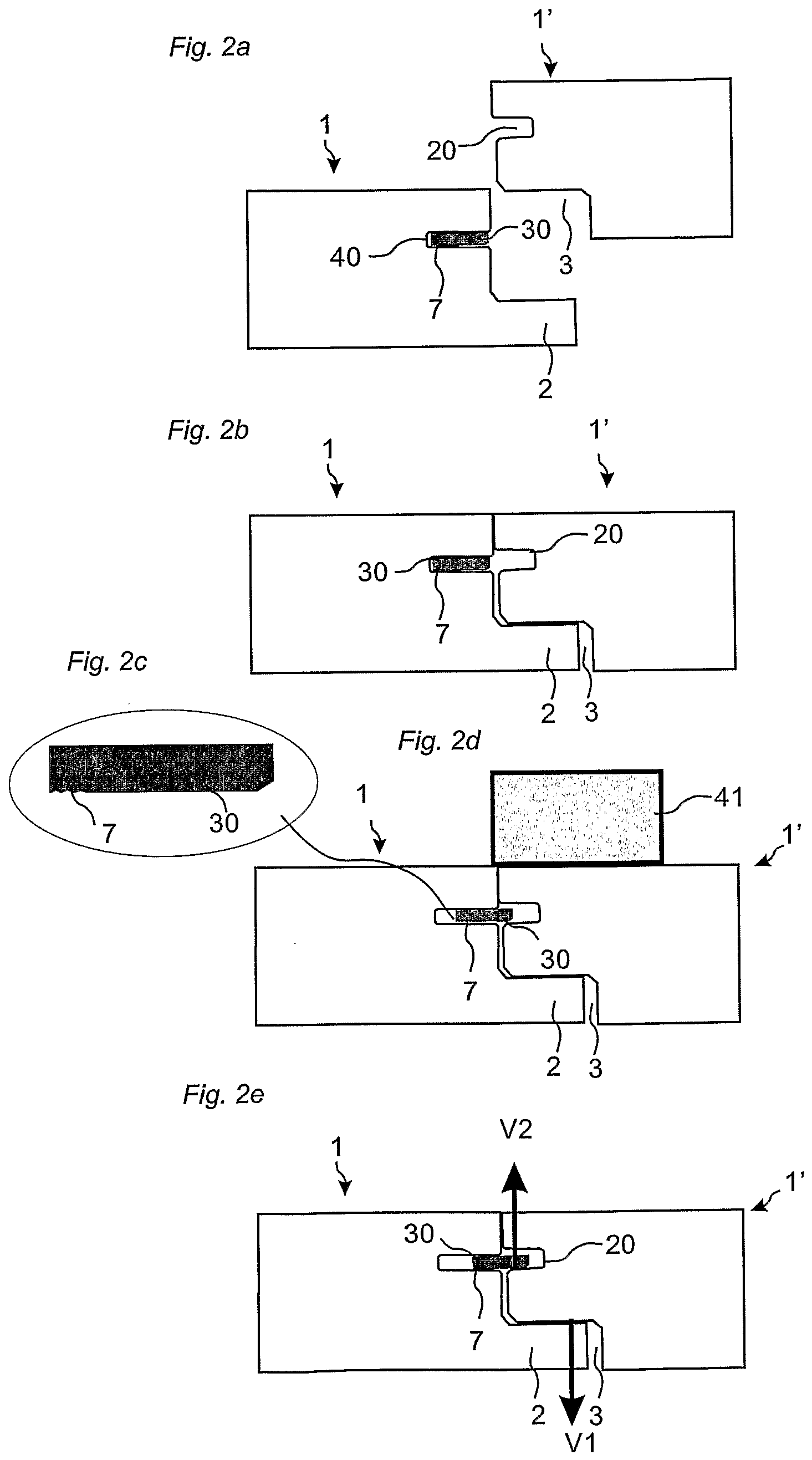 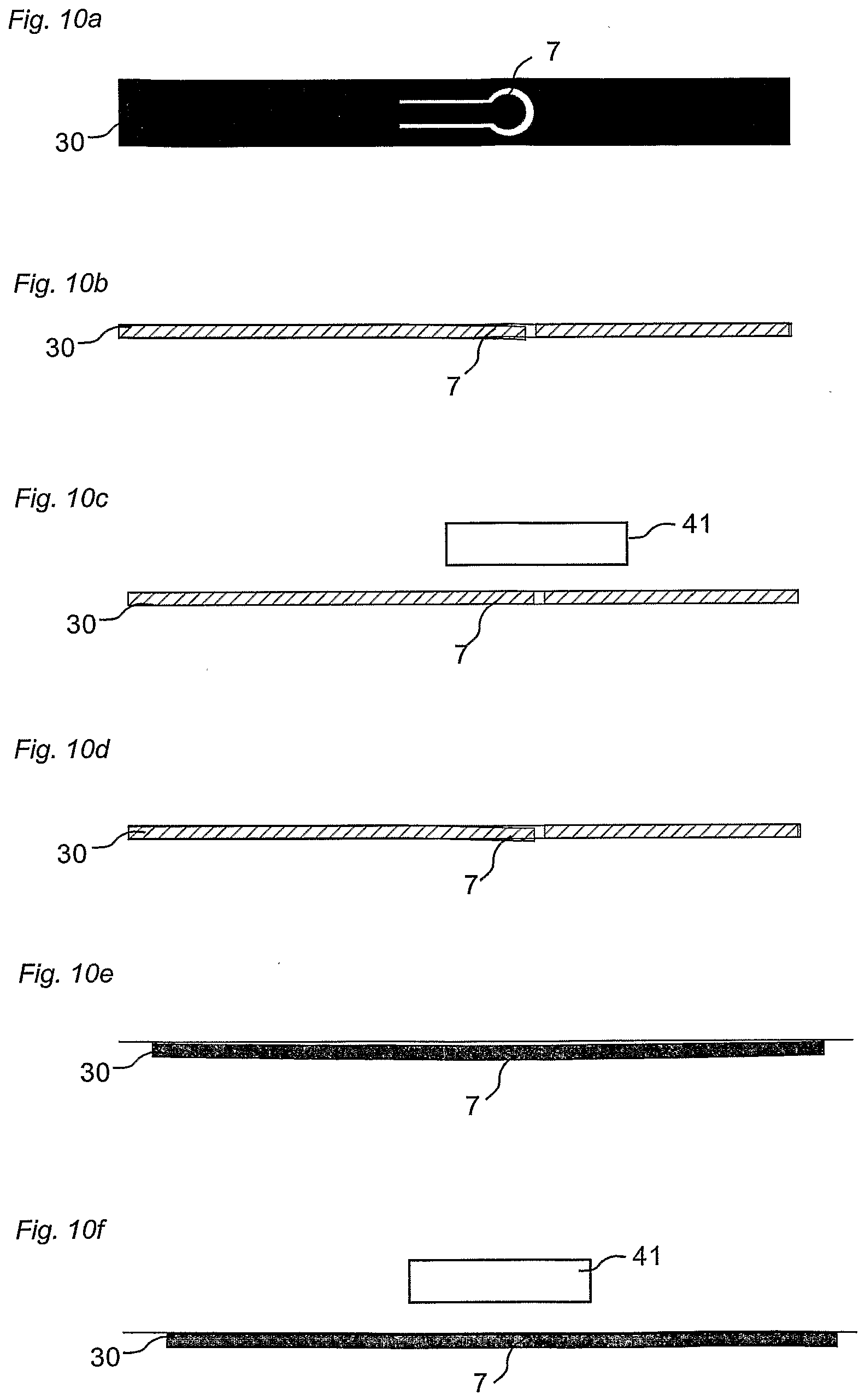 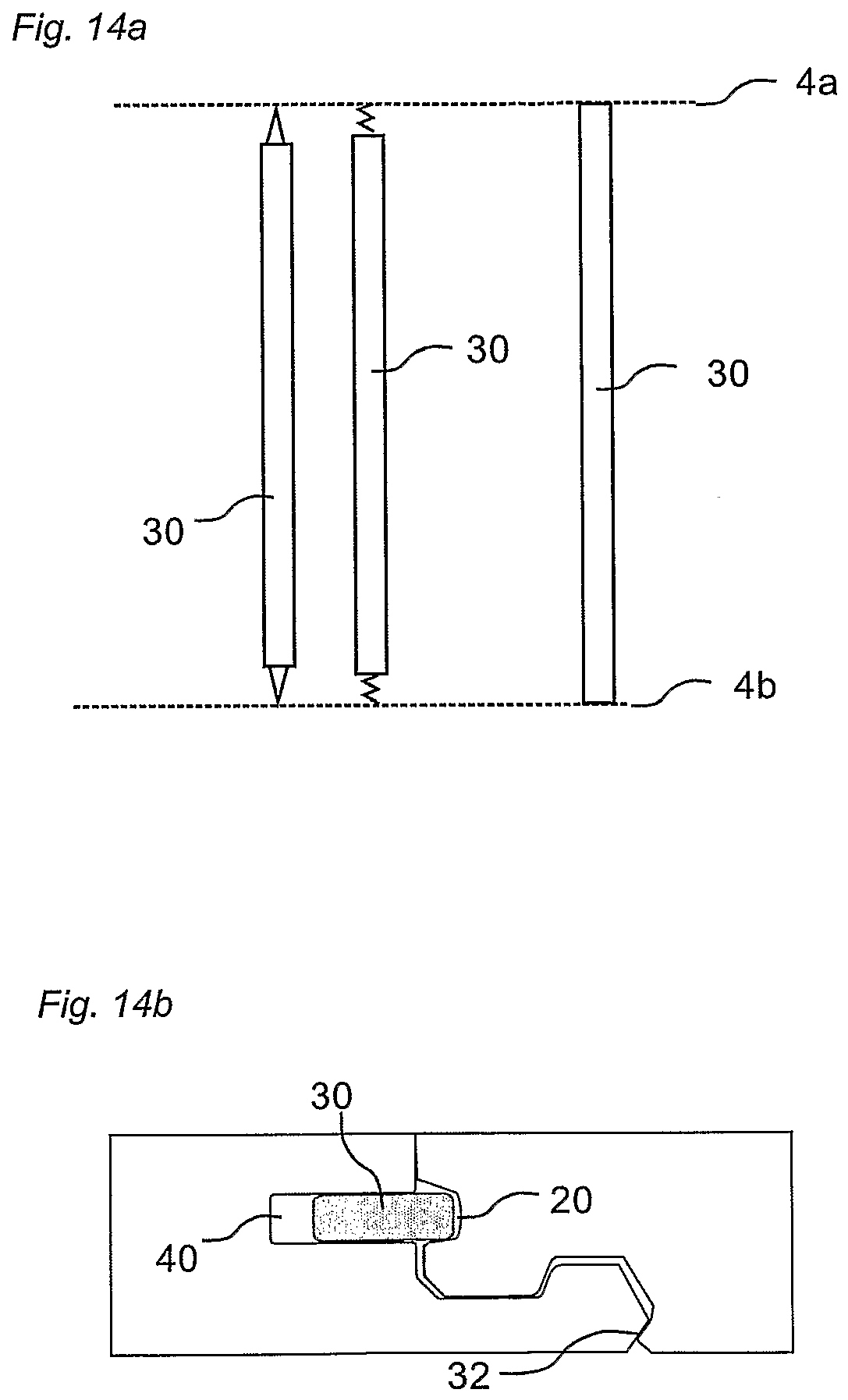 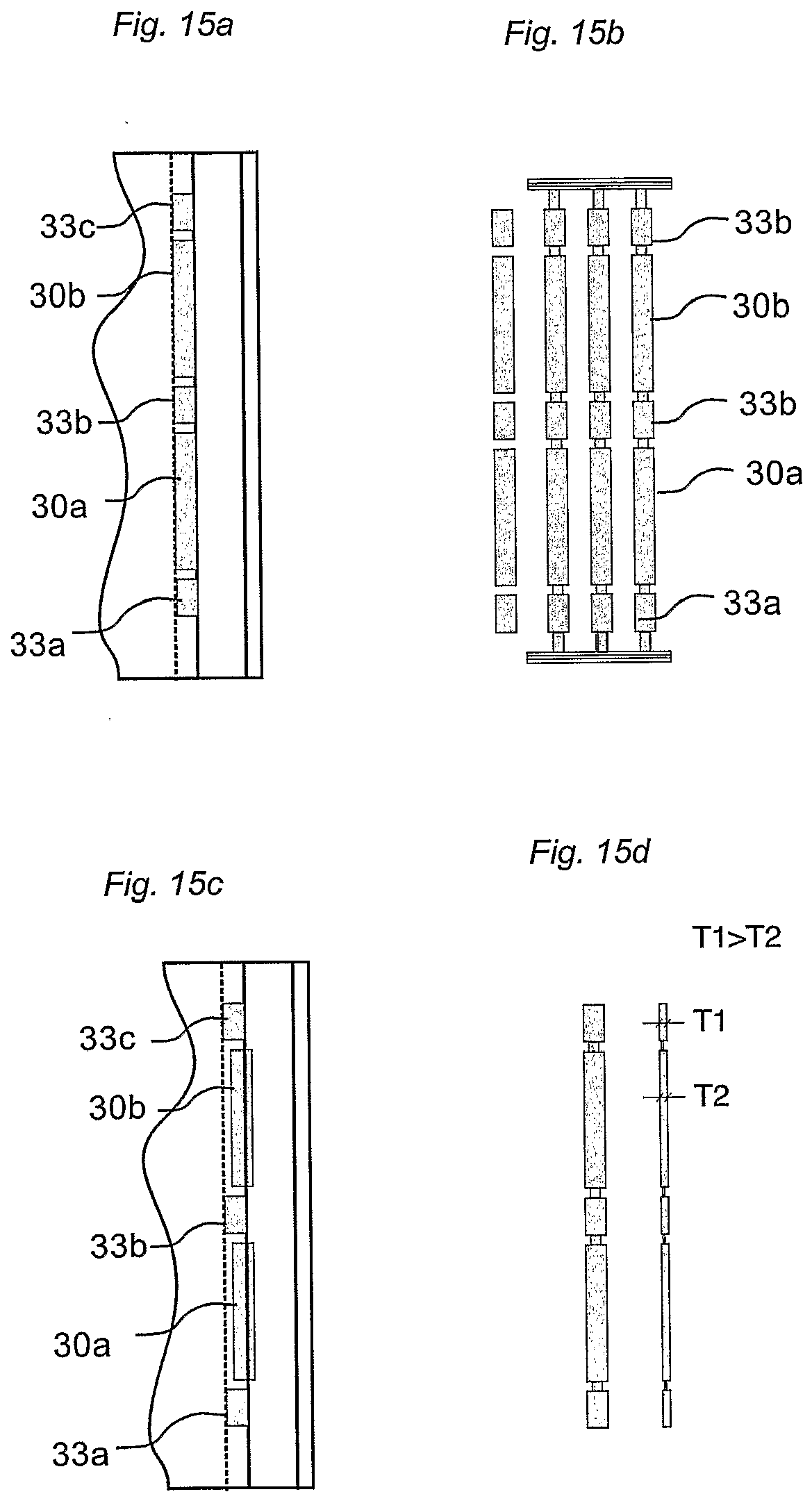