Background of the Invention:

Field of the Invention:

[0001] The invention relates generally to the field of compressed or encoded digital audio signals and more particularly to audio compression that uses scale factors or floating point representation to represent audio signals.

Decription of the Related Art:

[0002] A number of methods of coding and decoding digital signals are known, and are typically employed either to decrease the bit requirements for transmission and storage, or to increase the perceived quality of audio playback (subject to a bitrate constraint). For example, some such as DTS coherent acoustics (see US patent 5974380) and Dolby AC3 are in common commercial use, as are numerous variants of MPEG -2 compression and decompression.
[0003] In any digital audio representation, the signal is periodically sampled, then the series of samples are quantized by some method to represent an audio signal. In many codecs (encoder/decoder systems), the signal is represented by a series of quantized samples organized as a temporal sequence (time domain representation). In other codecs, the samples may be mathematically transformed by any of a number of mathematical methods, to yield a "frequency domain" representation, also called a spectral representation or a transform representation. Such codecs are often referred to a "transform codecs".
[0004] Whether the encoded representation uses time domain samples, encoded spectral values, or some other transformed series of data, it is often found advantageous to adapt the numerical representation of the samples to more efficiently use the available bits. It is known to represent data by using scale factors. Each data value is represented by a scale factor and a quantity parameter which is understood to be multiplied by the scale factor to recover the original data value. This method is sometimes referred to as a "scaled representation", sometimes specifically a block-scaled representation, or sometimes as a "floating-point" representation. It should be apparent that floating point representation is a special case of a scaled representation, in which a number is represented by the combination of a mantissa and exponent. The mantissa corresponds to the quantity parameter; the exponent to a scale factor. Typically the scale factor bits may be represented in some non-linear scheme, such as an exponential or logarithmic mapping. Thus, each quantization step of the scale factor field may represent some number of decibels in a log base 10 scheme (for example).
[0005] Although the use of scale factors commonly reducing the bit rate requirement for transmission, in a "forward-adaptive" codec it is required to transmit the scale factors in some manner. At lower bit rates the transmission of the scale factors requires a significant portion of the overall bit rate. Thus it is desirable to reduce the number of bits required to transmit the scale factors. The most common prior approach to this problem is to transmit a single scale factor associated with some larger plurality (block) of samples. One variant of this technique is referred to as "block-floating point." This method strikes a compromise between optimal quantization and the need to reduce the bits required for transmission of scale factors. The success of the technique is largely dependent on the time and frequency behavior of the signal, and signal transients present challenges.
[0006] US 2007/0063877 A1 discloses a method for compressing audio input signals to form a master bit stream that can be scaled to form a scaled bit stream having an arbitrarily prescribed data rate. A hierarchical filterbank decomposes the input signal into a multi-resolution time/frequency representation from which the encoder can efficiently extract both tonal and residual components. The components are ranked and then quantized with reference to the same masking function or different psychoacoustic criteria. The selected tonal components are suitably encoded using differential coding extended to multichannel audio. The time-sample and scale factor components that make up the residual components are encoded using joint channel coding (JCC) extended to multichannel audio. A decoder uses an inverse hierarchical filterbank to reconstruct the audio signals from the tonal and residual components in the scaled bit stream.

[0007] The invention provides for a method of compressing a digitized audio signal representing a sound with the features of claims 1, a method of decoding an encoded electronic data signal representing an audio signal with the features of claim 9 and a machine readable storage medium with the features of claim 14.
[0008] Embodiments of the invention are identified in the dependent claims.
[0009] The machine-readable storage medium is suitable for storing encoded audio information, wherein each sample is represented as a product of a scale factor and a corresponding quantity. The medium has a coded scale factor data field, wherein at least one matrix of scale factors is encoded by a two dimensional orthogonal transformation into a scale factor coefficient matrix; and a quantity field including encoded data quantities.

FIG. 1 is a high-level symbolic diagram of a generalized encoder in accordance with the invention, with functional modules shown as blocks;

FIG. 2 is a symbolic diagram of a generalized decoder in accordance with the invention;

FIG. 4 is a high level procedural or "flow" diagram showing at a general level the steps of an encode method in accordance with the invention;

FIG. 6 is a procedural diagram showing a continuation of the method of FIG. 5, including steps to further compress SCMs and quantity parameters for transmission through a communication channel;

FIG. 7 is an example of a data format suitable for packing a frame including encoded scale factor and audio quantity data for transmission or recording; FIG. 8 is a procedural diagram showing steps to decode scale factors and audio date encoded by the methods of FIGs 1-7;

FIG. 9 is a procedural diagram showing steps of a particular embodiment, showing more particular steps useful in decoding scale factors and audio data encoded by the methods of FIGs. 1-7; and

FIG. 10 is a procedural diagram of a novel method of notch removal, useful in the context of the method of encoding shown in FIG. 5.

Detailed Description of the Invention:

[0066] Enclosed within square brackets is the column-wise averaging. The second term in subtraction is the average value.
[0067] Similarly, for columns the method calculates a column trend (scalar) Tcol (step 952) by:

[0068] It is possible to employ other means for trend calculation, provided that the method provides some average slope across the row (or columns) of the matrix. The first trend is a scalar Trow; The second trend is a scalar Tcol.
[0069] After this calculation, the trends are scaled by the row and column index and subtracted (step 954) from the matrix D according to the equation:

[0073] The matrix OUTi,j is substituted as the scalefactor matrix, and used in further encoding steps as a "smoothed" scalefactor matrix.
[0074] It should be appreciated that the matrix OUT has been smoothed by notch removal; inasmuch as the provisional scalefactor assignment was previously carried out in some optimal manner, the quantization according to the matrix OUT will be suboptimal in terms of quantization noise. However, the suboptimal scalefactors will be confined to those matrix entries which represent a slot between higher scalefactors: either a frequency band sandwiched between two frequencies with higher signal levels; or a short time slot adjacent to a time slot with higher amplitude signal, the first case is a situation in which psychoacoustic frequency masking is expected to occur; the second case corresponds to a quiet passage adjacent to a loud transient (temporal masking should occur). In both situations, less than optimal quantization is tolerable because of psychoacoustic masking phenomena. Possibly for these reasons, the smoothing of the scalefactor matrix by notch removal has been found to reduce bit requirement for coding, while offering subjectively acceptable replication of the signal. Alternatively, the additional bits can be allocated to improve signal to noise in regions that are more psychoacoustically sensitive.
[0075] While several illustrative embodiments of the invention have been shown and described, numerous variations and alternate embodiments will occur to those skilled in the art. For example, as mentioned above, various transforms such as Fourier Transform, DCT, or modified DCT transforms could be employed to separate the audio signal into subbands (in other words, bins), thereby producing two-dimensional frames. Various functions could be used to define scalefactors in a non-linear mapping, other than a decibel scale. Different data formats, different entropy reducing codes, and different tiling patterns and frame sizes could be used.

1. A method of compressing a digitized audio signal representing a sound, said signal having an audio bandwidth, in an audio compression system representing sound samples or spectral values using a scale-factor plus data format, wherein a sample is represented as a product of a scale factor and an associated quantity, the method comprising the steps of:

organizing the scale factor fields of said subband signals into a two-dimensional matrix of scale factors organized by time as a first dimension, and a subband frequency range as a second dimension;

compressing each said SCM to produce a compressed coefficient matrix representing the scale factors in a tile in a compressed format;

mixing said reconstructed subband signal to produce a replica of a full band audio signal representing a sound, and

further comprising the step of causing a sound to be reproduced, based upon said stream of sequential digitized audio samples, said sound an approximate replica of a sound encoded by a method compatible with the method of decoding.

13. The method of claim 9, wherein said signal is read from a machine readable storage medium.
14. A machine readable storage medium storing encoded audio information that has been prepared by a method according to one or more of the previous claims 1 to 8, wherein each sample is represented as a product of a scale factor and a corresponding quantity, the medium comprising:

a coded scale factor data field, wherein at least one matrix of scale factors is encoded by a two dimensional orthogonal transformation into a scale factor coefficient matrix; and 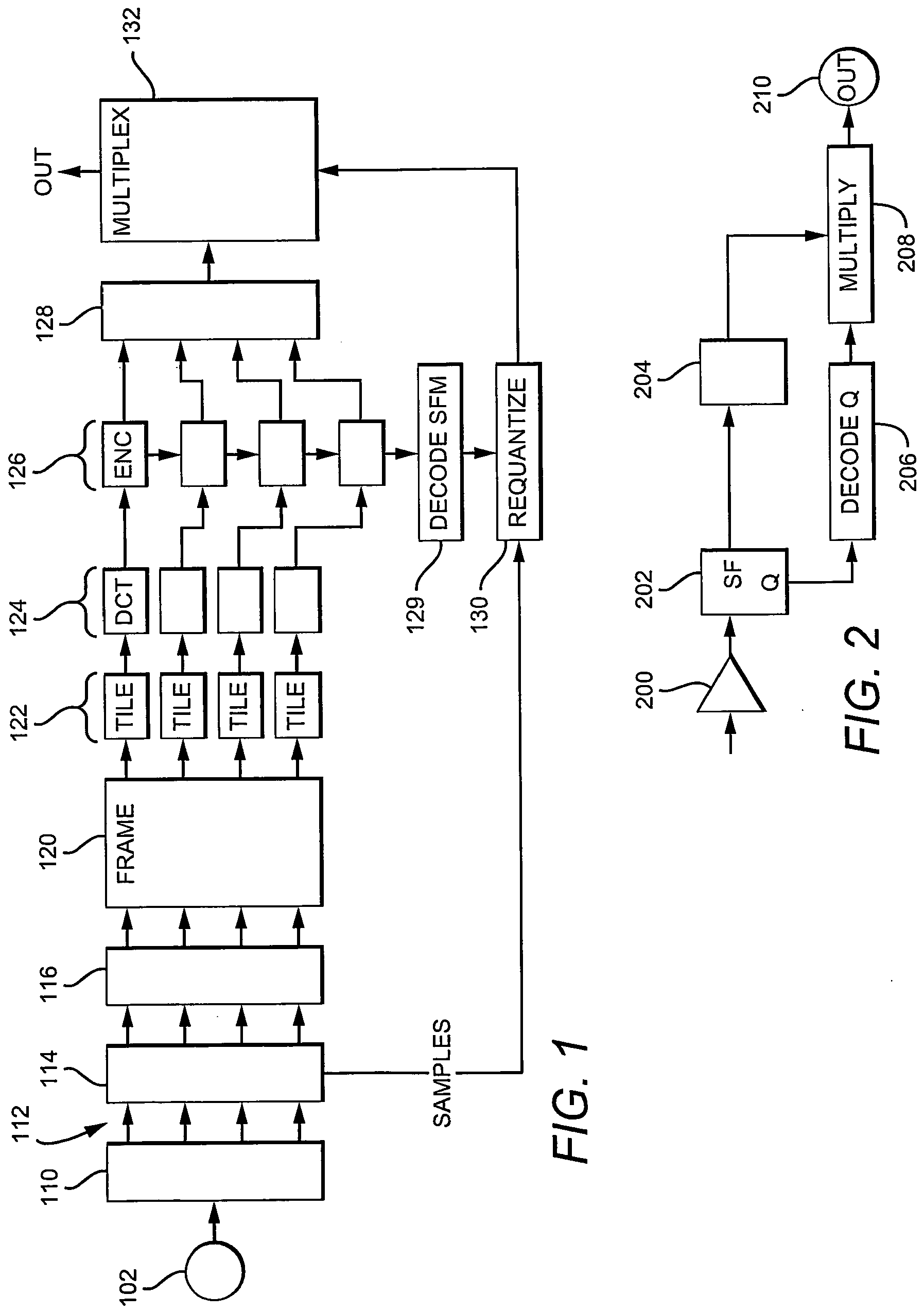 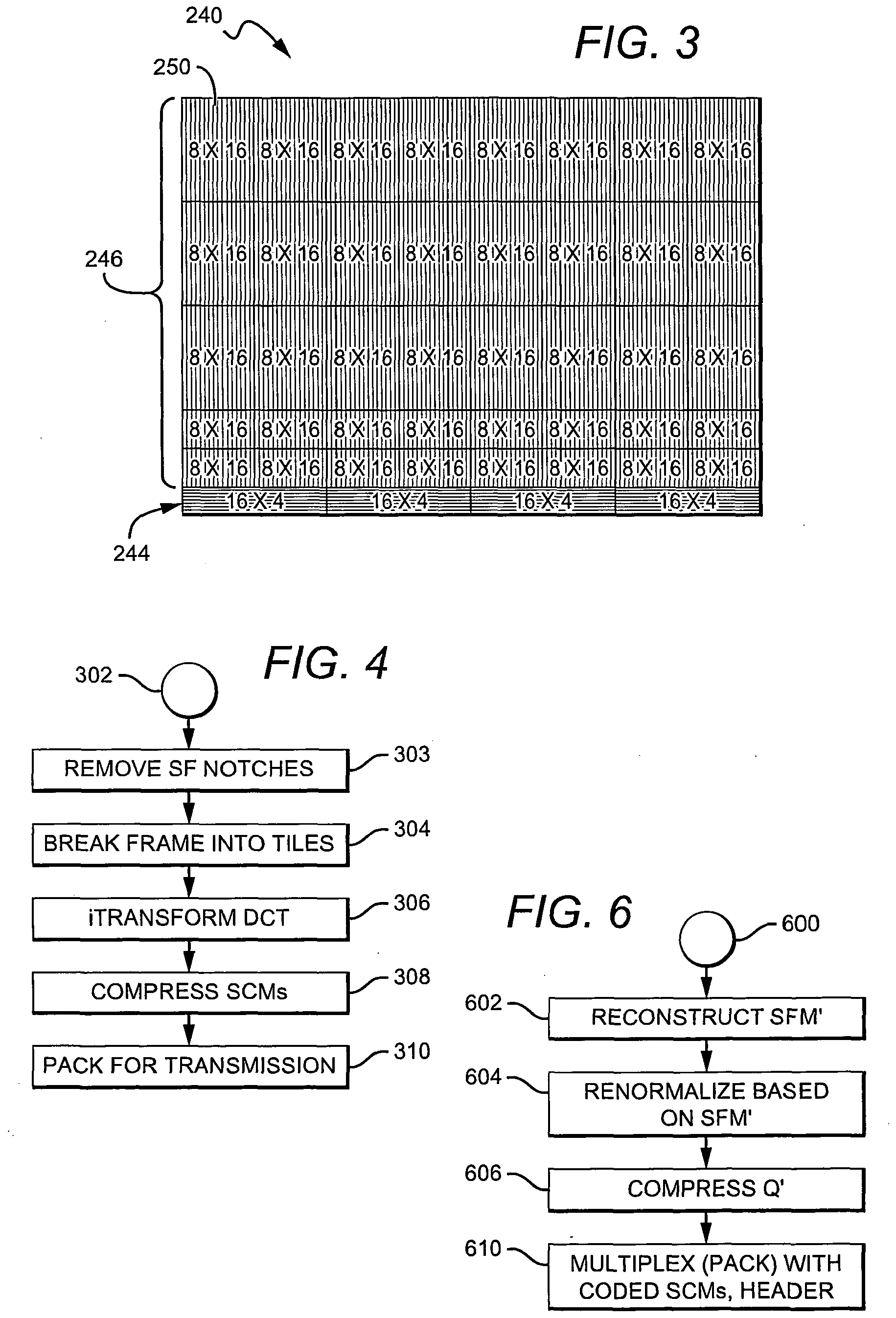 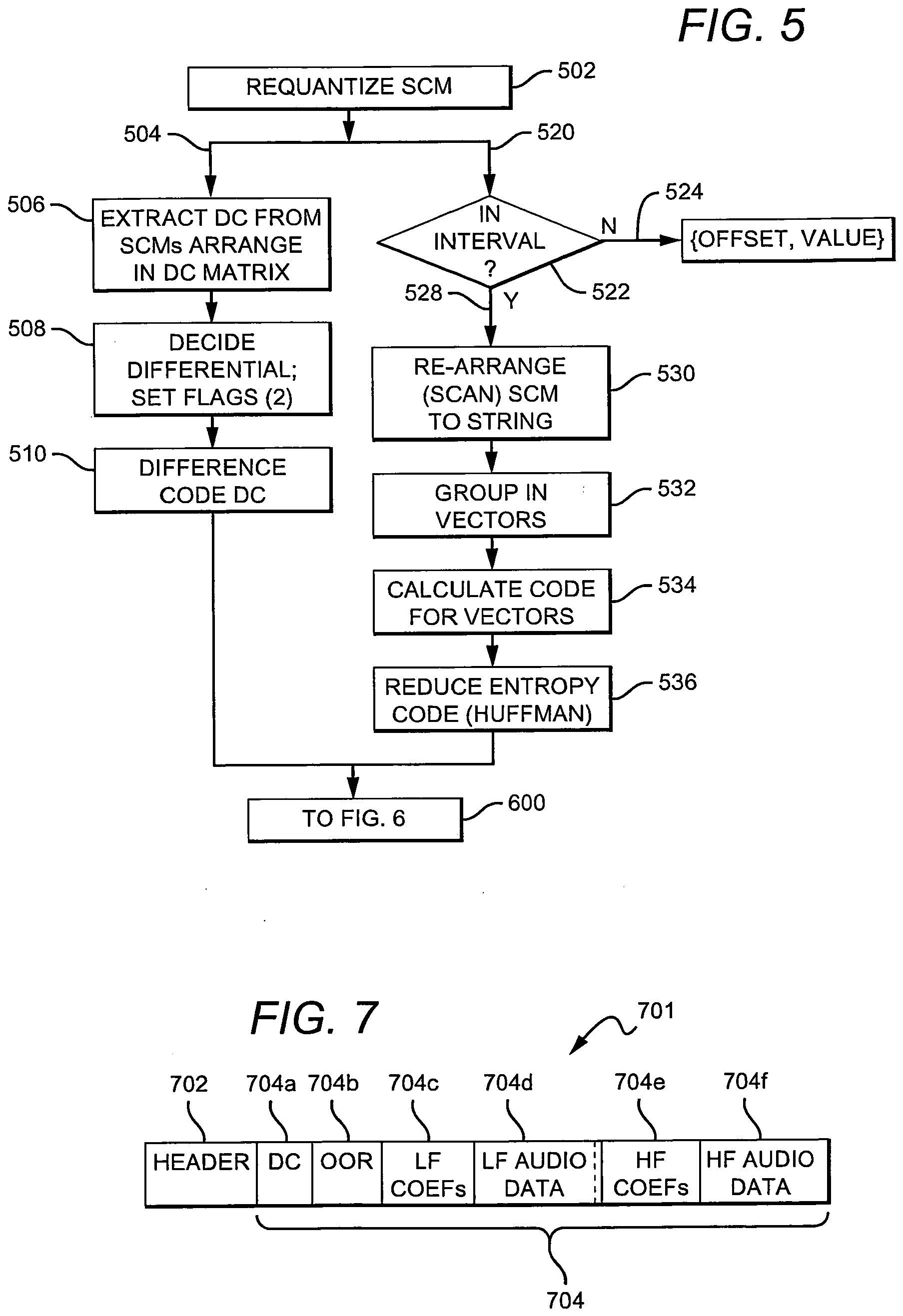 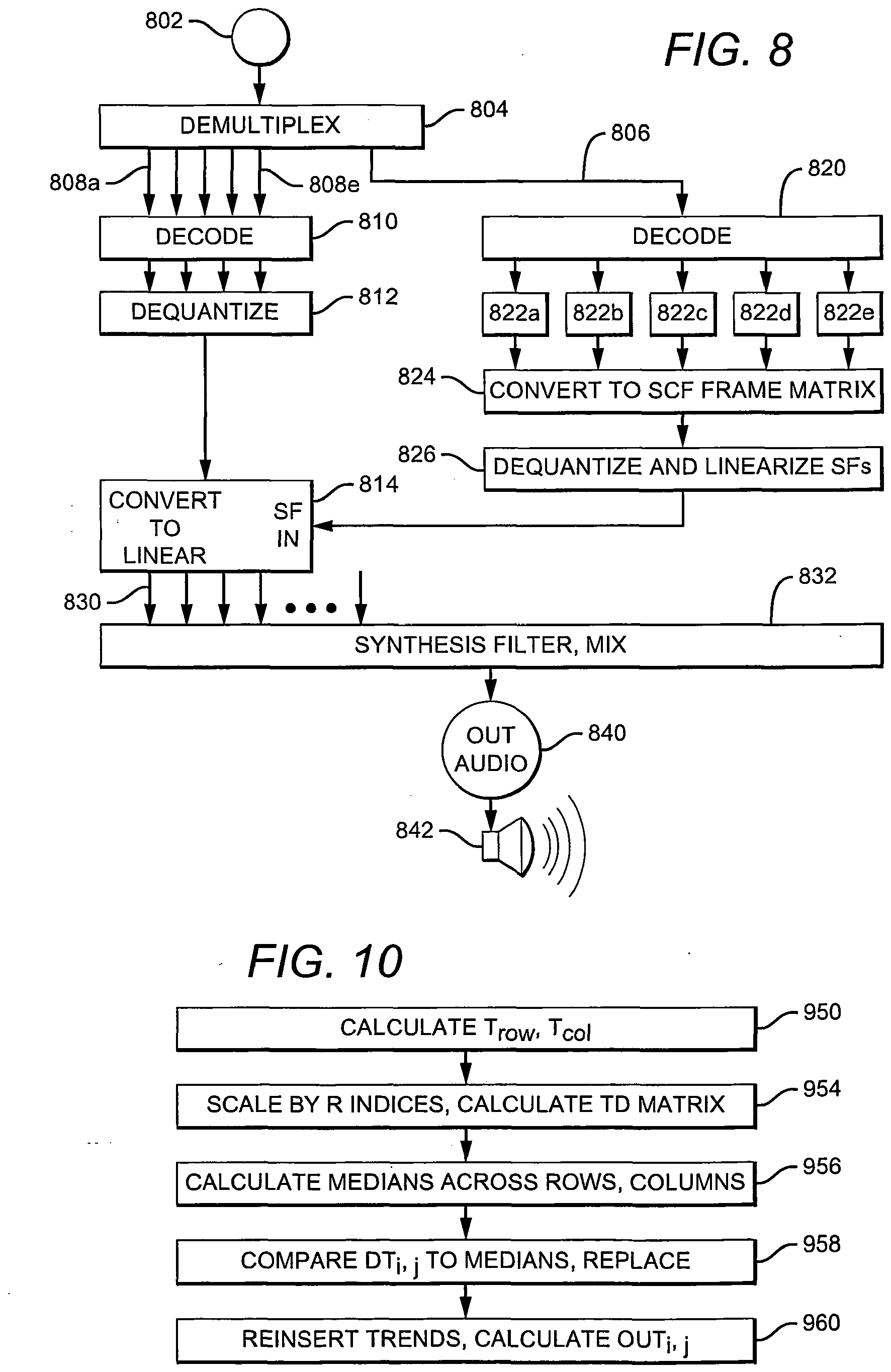 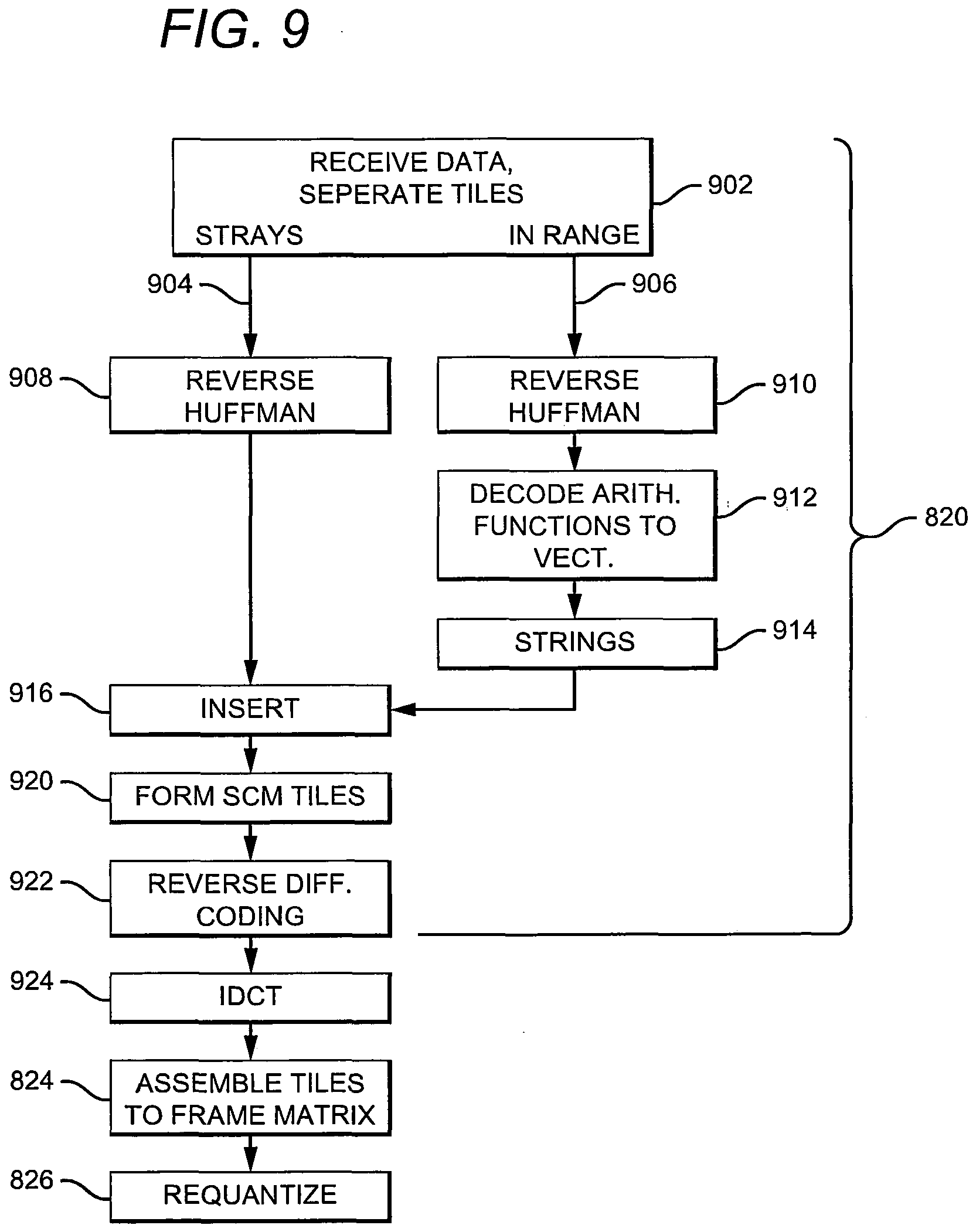