[0001] Fig. 1 illustrates a thin-film flip-chip semiconductor light-emitting device described in more detail in US Patent No. 7,256,483. As used herein, the term "GaN" may represent any III-N material. WO 2007/091704 A1 discloses a light emitting diode including a transparent substrate and a compound semiconductor layer bonded to the substrate. Opposite the substrate, the compound semiconductor layer has a window extending through a part of the compound semiconductor layer. Further semiconductor devices are for instance disclosed in US 2005/189558 A1, EP 1 705 764 A1, WO 2007/063460 A1, WO 2007/063460 A1, US 2007/284607 A1 and US 2004/211972.
[0002] The LED of Fig. 1 is grown on a growth substrate. Typically, a relatively thick (approx. 1-2 micron) undoped or n-type GaN layer is grown on a sapphire growth substrate using conventional techniques. Other substrates may also be used, such as SiC, Si, SiCOI, and ZnO. In the case of gallium-phosphide (III-P) LEDs, the growth substrate is typically GaAs or Ge. The relatively thick GaN layer typically includes a low temperature nucleation layer and one or more additional layers so as to provide a low-defect lattice structure for the n-type cladding layer and active layer. One or more n-type cladding layers 16 are then formed over the thick n-type layer, followed by an active layer 18, one or more p-type layers 20, including one or more cladding layers and a p-type contact layer.
[0003] Various techniques are used to gain electrical access to the n-layers. In a flip-chip example, such as the device shown in Fig. 1, portions of the p-layers and active layer are etched away to expose an n-layer for metallization. In this way the p contact and n contact are on the same side of the chip and can be directly electrically attached to the package substrate contact pads. Current from the n-metal contact initially flows laterally through the n-layer. In contrast, in a vertical injection (non-flip-chip) LED, an n-contact is formed on one side of the chip, and a p-contact is formed on the other side of the chip. An electrically insulating substrate is removed to expose the conductivity type layer that is buried, often an n-type layer. Electrical contact to one of the p or n-contacts is typically made with a wire bond or a metal bridge, and the other contact is directly bonded to a package substrate contact pad.
[0004] In the flip chip illustrated in Fig. 1, after etching to expose an n-type layer, the n- and p-contact metals 50 and 24 are formed. The n- and p-contacts 50 and 24 may include bonding metals, diffusion barriers, or other layers to protect the optical properties of the contact. The p-metallization 24 may be highly reflective to light emitted by the active layer. After the contacts are formed, a wafer of devices may be diced into individual devices.
[0005] The metallization layers are then bonded to metal contact pads 22 on the package substrate 12. The bond technology may be solder, thermocompression, interdiffusion, or a Au stud bump array bonded by an ultrasonic weld.
[0006] The package substrate 12 may be formed of the electrically insulating material AlN, with gold contact pads 22 connected to solderable electrodes 26 using vias 28 and/or metal traces. Alternatively, the package substrate 12 may be formed of a conducting material if passivated to prevent shorting, such as anodized AlSiC. The package substrate 12 may be thermally conductive to act as a heat sink or to conduct heat to a larger heat sink. Ultimately the LED may have a lens cap attached, or be coated with a phosphor (for converting blue or UV light to create a white light), or be further processed, and the package may be soldered to a printed circuit board, if appropriate for the particular application.
[0007] An underfill material 52 may be deposited in the voids beneath the LED to reduce thermal gradients across the LED, add mechanical strength to the attachment, and prevent contaminants from contacting the LED material.
[0008] After bonding the device to the package substrate, the growth substrate is removed by a technique appropriate to the substrate material; for example by laser lift-off, etching, or lapping. The semiconductor structure exposed by removing the substrate may be thinned, then optionally roughened or patterned. A phosphor material may be deposited over the LED die. For example, a ceramic phosphor slab may be attached to the LED die by an organic adhesive.
[0009] In the device illustrated in Fig. 1, many fabrication steps are performed after a wafer is diced into individual devices. Organic materials may be included in the device, for example as underfill or to attach the ceramic phosphor.

Fig. 2 is a cross sectional view of a portion of a device, including a semiconductor structure grown on a growth substrate.

Fig. 3 is a cross sectional view of the structure of Fig. 2 after etching trenches through the bonding layer and semiconductor structure.

Fig. 5 illustrates the bonded structure resulting from Fig. 4, after removing the growth substrate and forming a porous region.

Fig. 7 illustrates a semiconductor light emitting device with large area contacts formed on a stack of metal and dielectric layers.

a semiconductor structure (32) comprising a light emitting layer disposed between an n-type region (49) and a p-type region (46);

at least one transparent bonding layer (34) disposed between the p-type region (46) and the window layer (40);

the semiconductor structure (32) is disposed between the window layer (40) and the light-directing structure (44); and

the light-directing structure (44) is disposed on a surface of the n-type region (49); and

the at least one transparent bonding layer (34) is conductive and directly connected to the p-type region (46),

the opening (54) exposes a portion of the at least one transparent bonding layer (34), and

the p-contact (60) is disposed on the exposed portion of the at least one transparent bonding layer (34).

2. The device of claim 1 wherein the bonding layer (34) is one of a transparent conductive oxide, indium tin oxide, zinc oxide, and ruthenium oxide.

3. The device of claim 1 wherein a combined thickness of all layers disposed between the p-type region and the window layer (40) is less than 2 µm.

8. The device of claim 1 wherein a bond between the window layer (40) and the p-type region is free of organic material.

9. The device of claim 1 wherein the window layer (40) is one of an optical filter, sapphire, and glass. 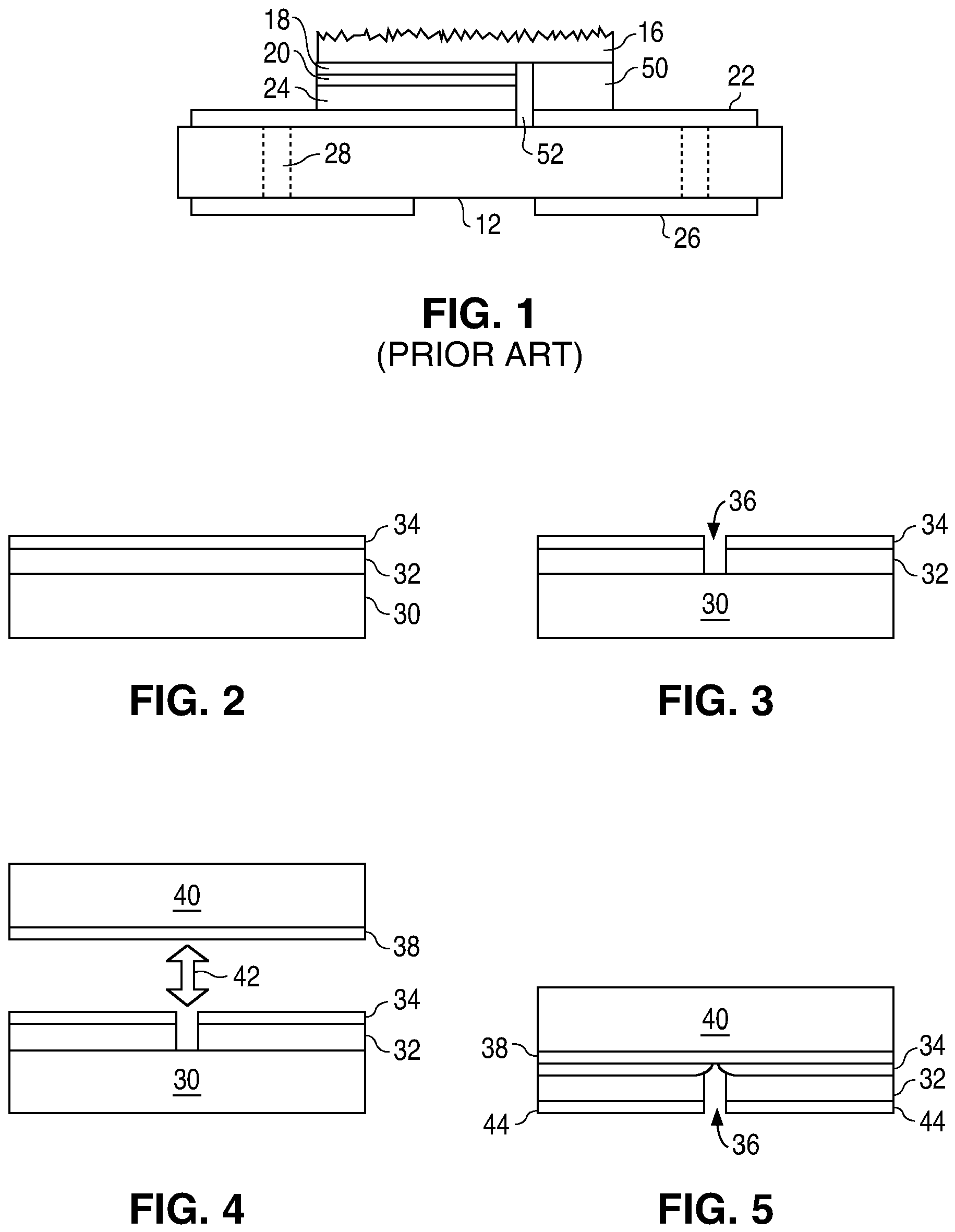 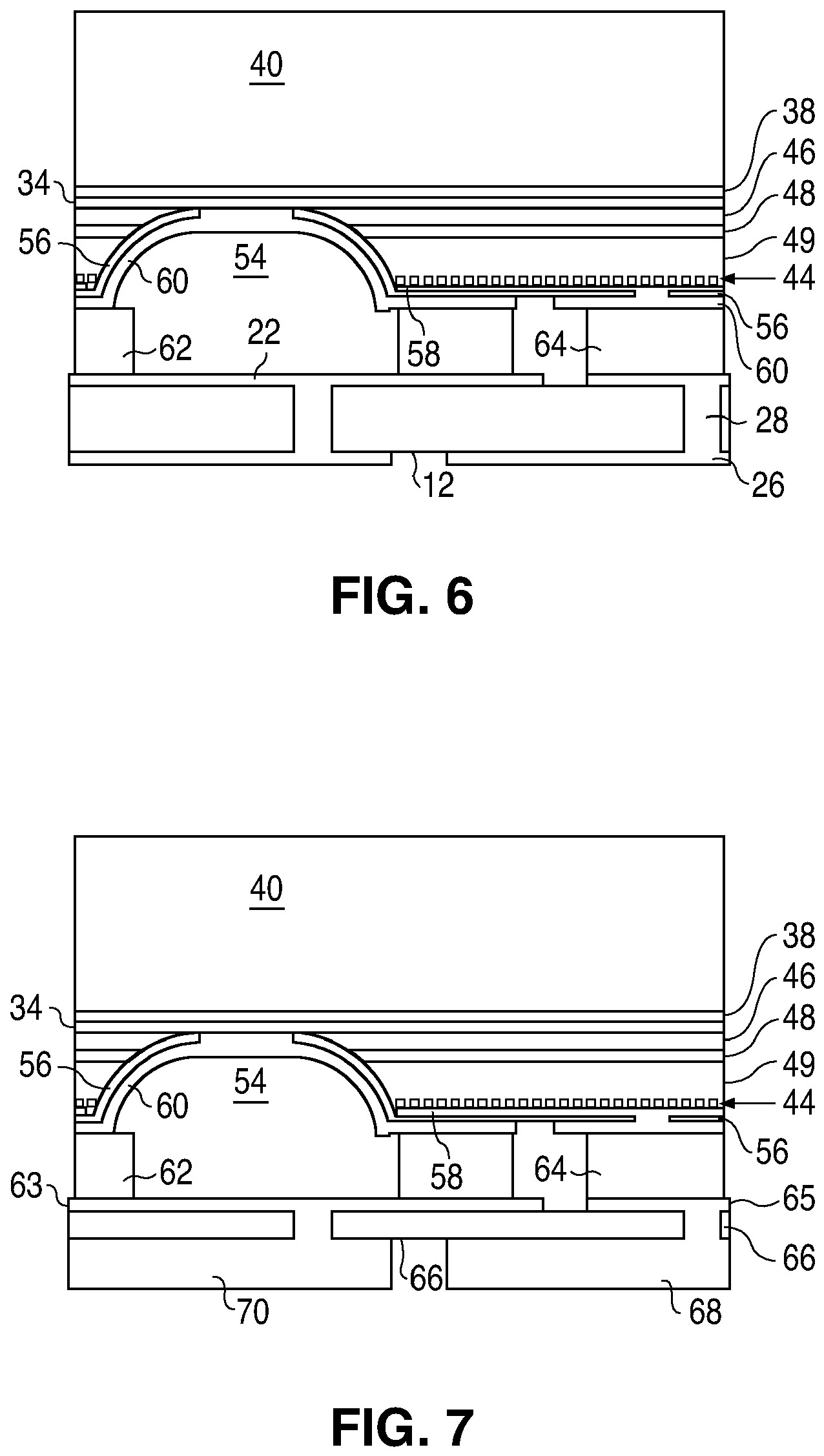