[0001] This invention relates to symbol reading devices, and more specifically, to an improved two dimensional image sensor that is adapted to read a one dimensional barcode.

[0002] One dimensional (1D) and two dimensional (2D) symbols are well known in the art and are used for pricing and inventory data. Typically, 1D or 2D barcodes consist of interspaced dark and light areas which encode various data used for pricing, inventory control, etc. The alternating dark and light areas are used in either one or two dimensions to encode data.
[0003] FIG. 1 depicts a 1D image sensor comprising a 2,048 pixel line image sensor, typical of the prior art. In such a system, each vertical line 105 captures a portion of the one dimensional barcode, and the system then transfers the data to a computer for decoding. Each element is shown as approximately 200 microns top to bottom in length. The relatively extended length of each element 105 helps to assure that a sufficient amount of photon energy is captured to provide a signal with a high signal to noise ratio.
[0004] One dimensional CCD arrays such as those of FIG. 1 which are typically used to read one dimensional barcodes, have several drawbacks. Because the width of such sensors is relatively large, the size of the optical system grows unacceptably. Second, in order to insure that the array of vertical pixel lines is appropriately aligned with the target to be imaged, relatively complicated mechanical adjustment is required.
[0005] Two dimensional image sensors have also been employed to read one dimensional barcodes. However, these two dimensional sensors operate by essentially taking a picture of the one dimensional barcode as a two dimensional image, and then transmitting the two dimensional image to a processor for processing and decoding. While such an arrangement achieves some advantages over the one dimensional CCD arrays such as that shown in FIG. 1, the required memory, computing power and circuitry to perform the complex image decoding operations becomes expensive.
[0006] In view of the foregoing, there exists a need in the art for an improved manner in which to decode a one dimensional barcode while taking better advantage of a 2D image sensor.
[0007] EP-A-1717728 discloses in general a method of reading a one dimensional barcode according to the preamble of claim 1. The optical reader of EP-A-1717728 has a 2D image sensor that is configured to operate in a partial frame capture mode. In a partial frame operating mode, the reader clocks out and captures at least one partial frame of image data having image data corresponding to less than all of the pixels of an image sensor pixel array. In one embodiment, the reader operating in a partial frame operating mode captures image data corresponding to a linear pattern of pixels of the image sensor, reads the image data, attempts to decode for a decodable ID symbol which may be represented in the image data, and captures a full frame of image data if the image data reading reveals a 2D symbol is likely to be present in a full field of view of the 2D image sensor.

FIG. 1 depicts a prior art one dimensional sensor including a horizontal CCD array;

FIG. 2 depicts a barcode and a two dimensional image sensor to be used for reading the one dimensional barcode;

FIG. 3 depicts conceptually the use of control electronics to vary the vertical viewing angle in one embodiment of the present invention;

FIG. 4 demonstrates conceptually the use of "averaging" techniques in accordance with the present invention;

FIG. 5 depicts an additional embodiment in which the optical axis may be moved vertically through control electronics rather than physical movement;

FIG. 6 depicts a block diagram of exemplary electronics for processing images acquired using one or more embodiments of the present invention;

FIG. 7 shows an example of a misaligned barcode being read by a 2D sensor in accordance with the invention;

FIG. 8 depicts a variety of situations in which a raster scan mode of the invention would be useful; and

BEST MODE OF CARRYING OUT INVENTION 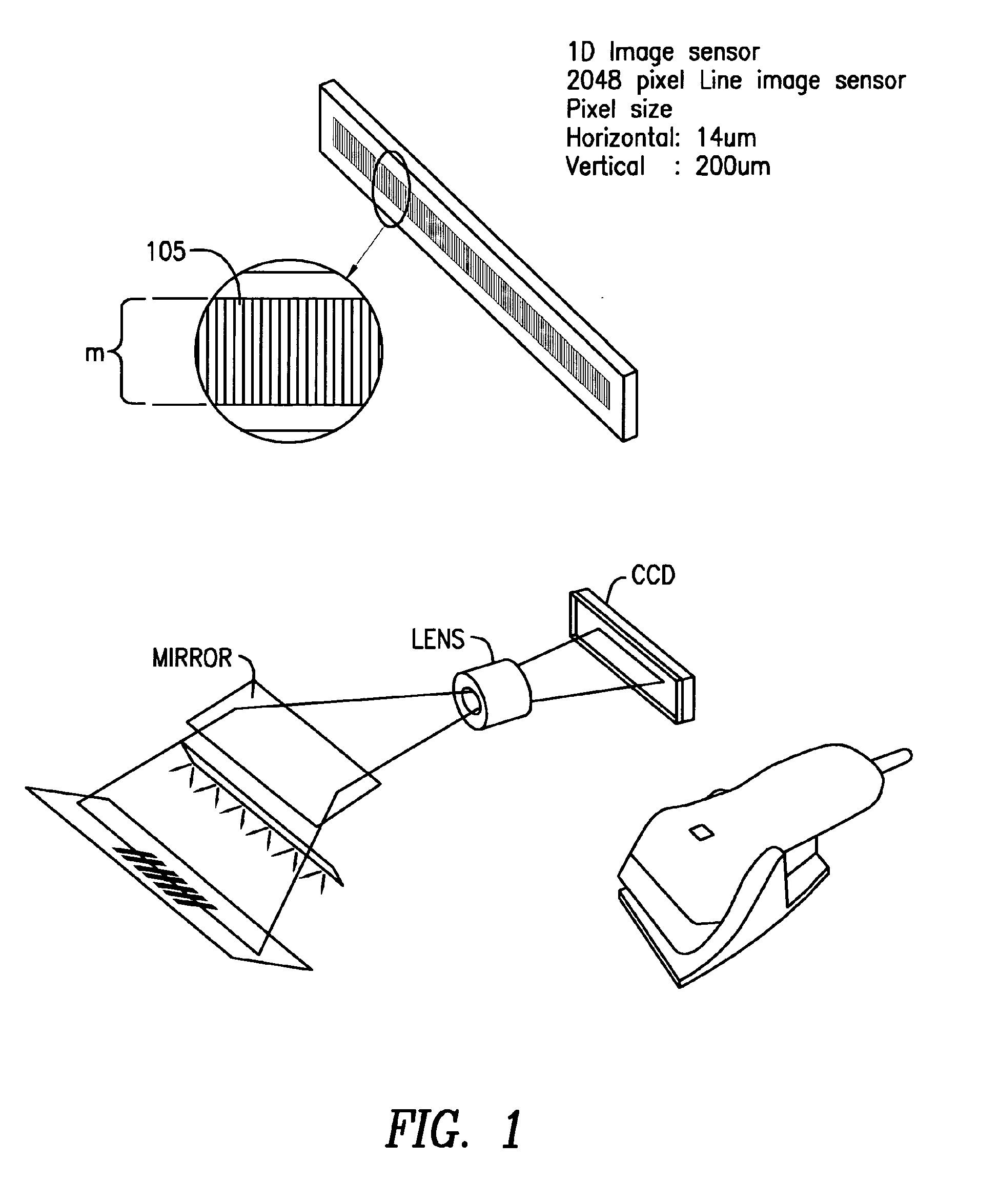 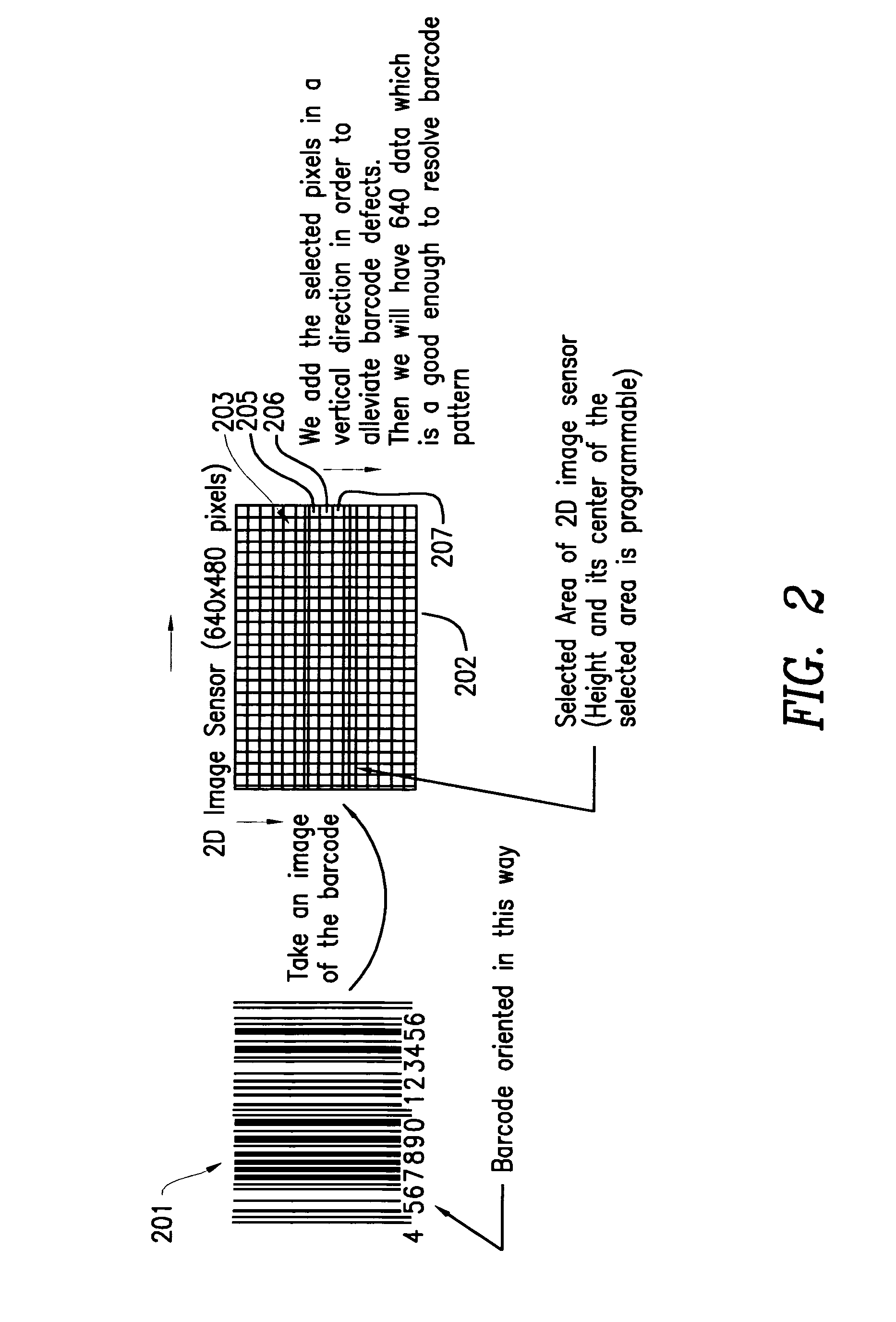 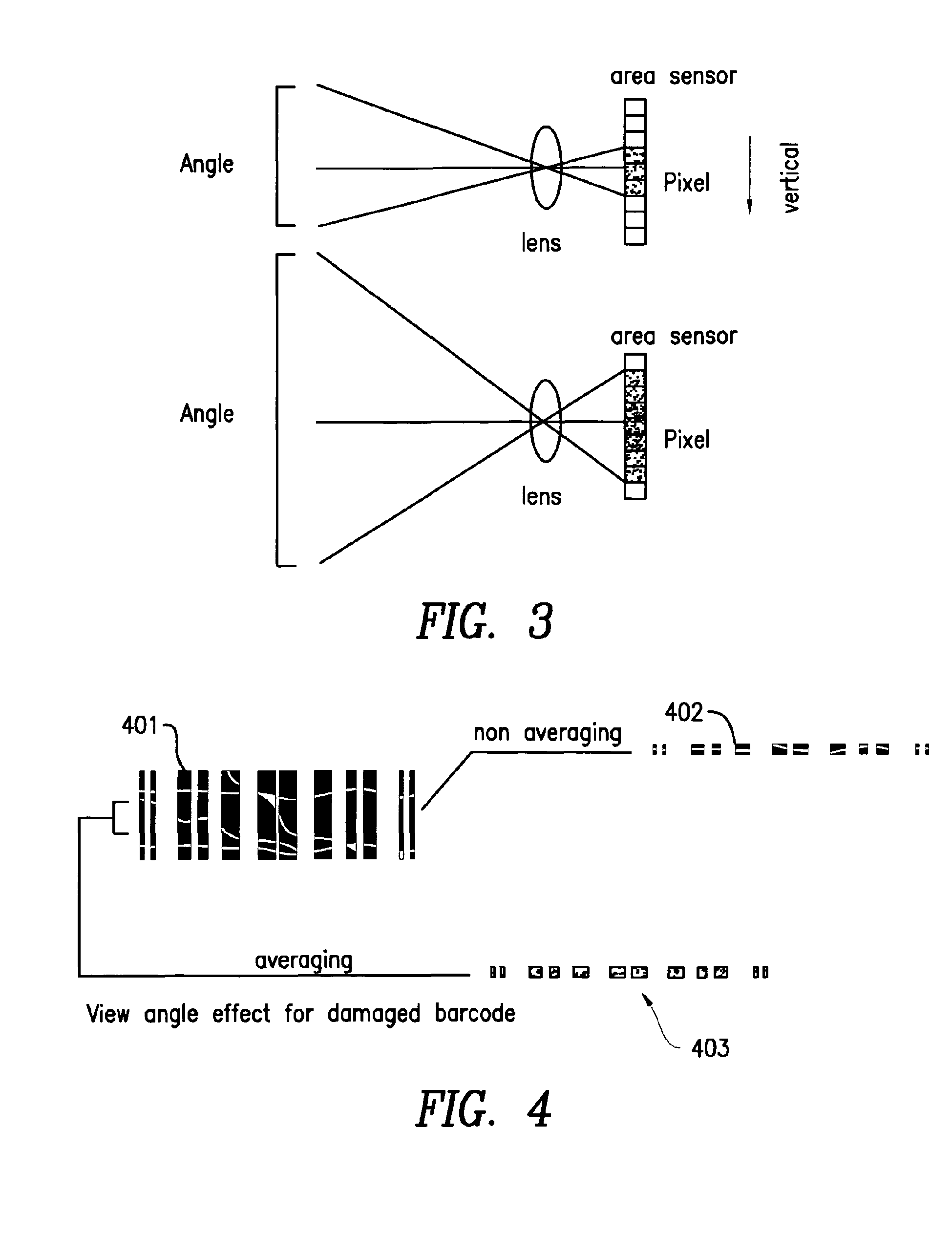 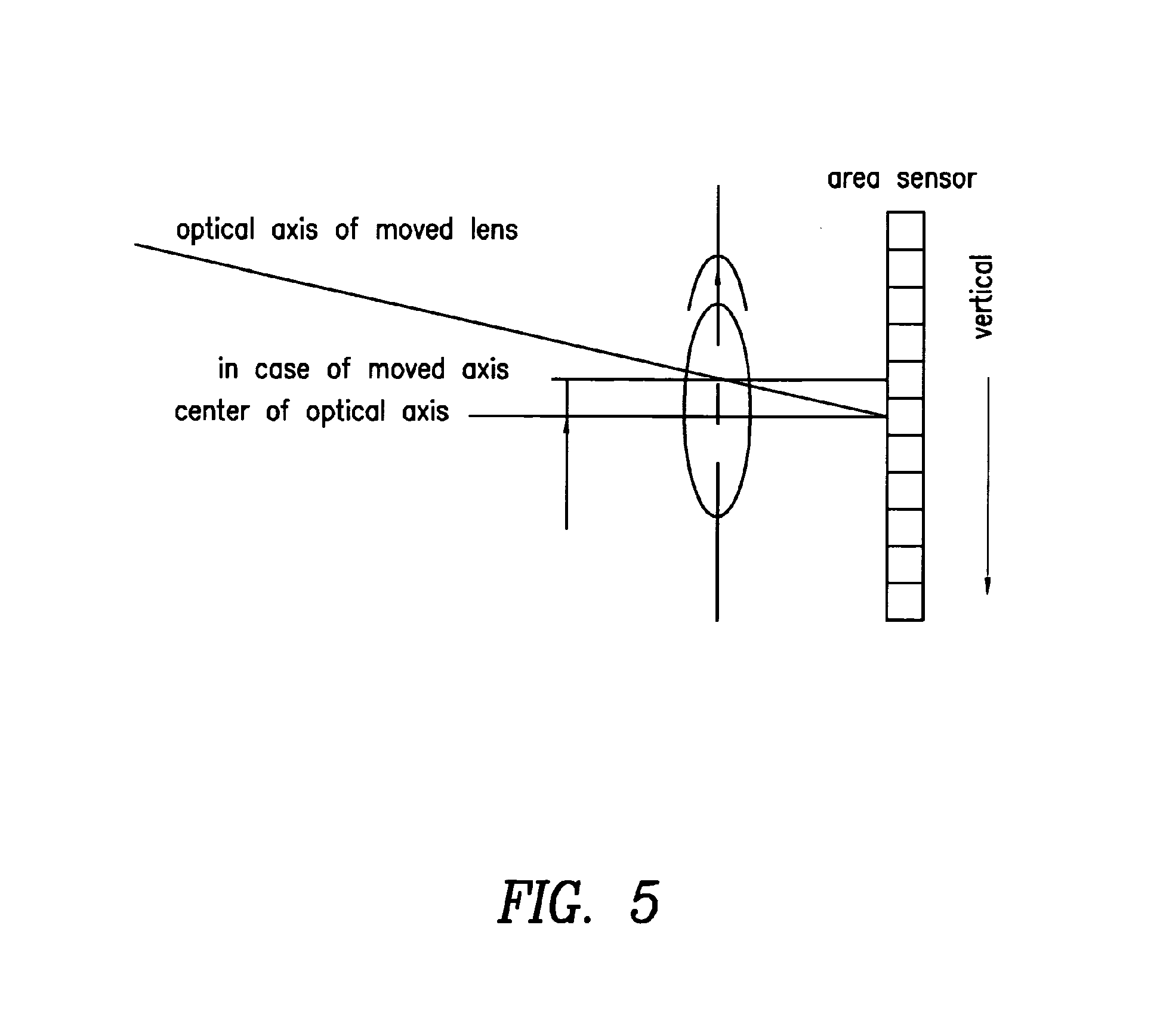 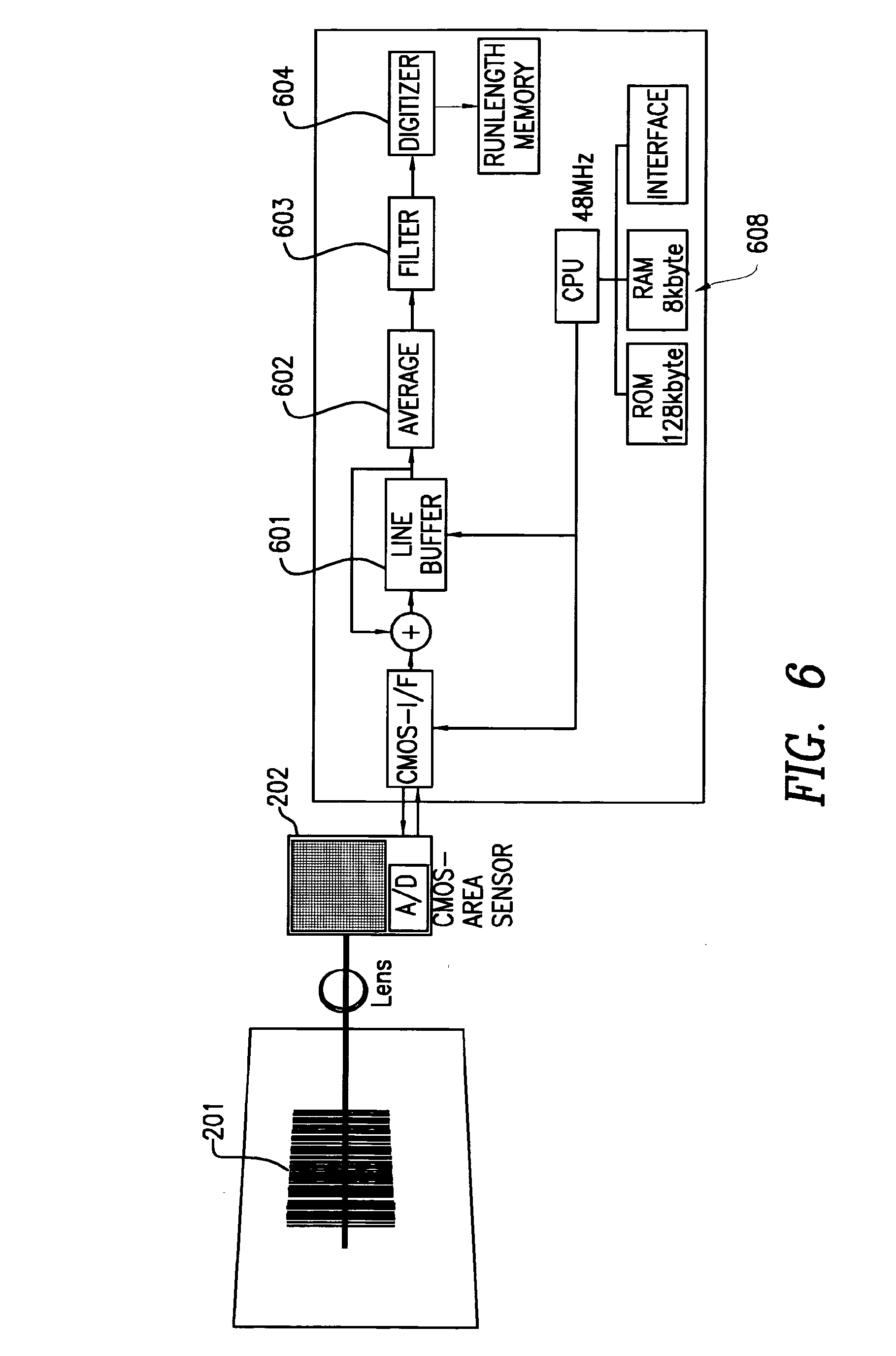 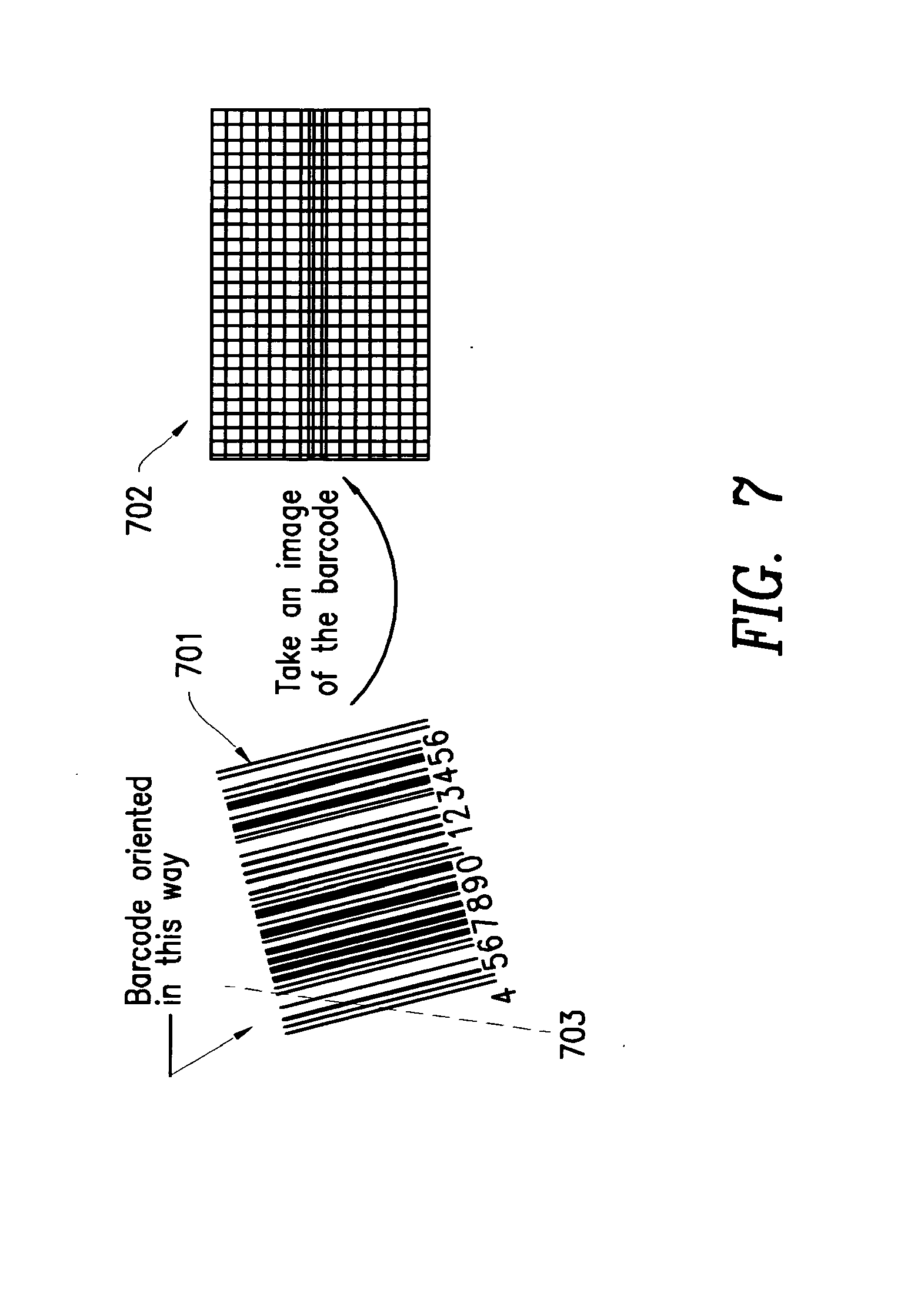 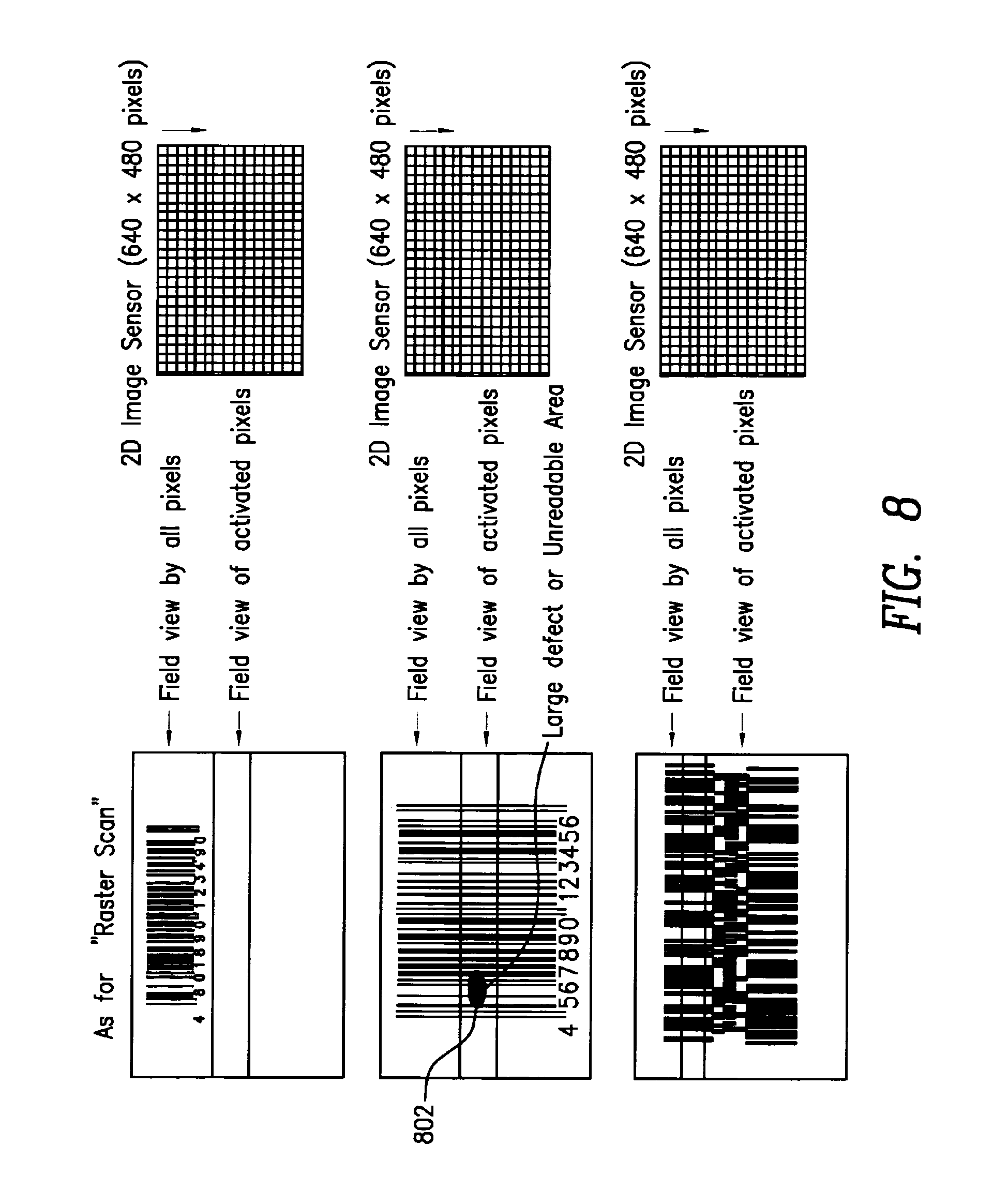 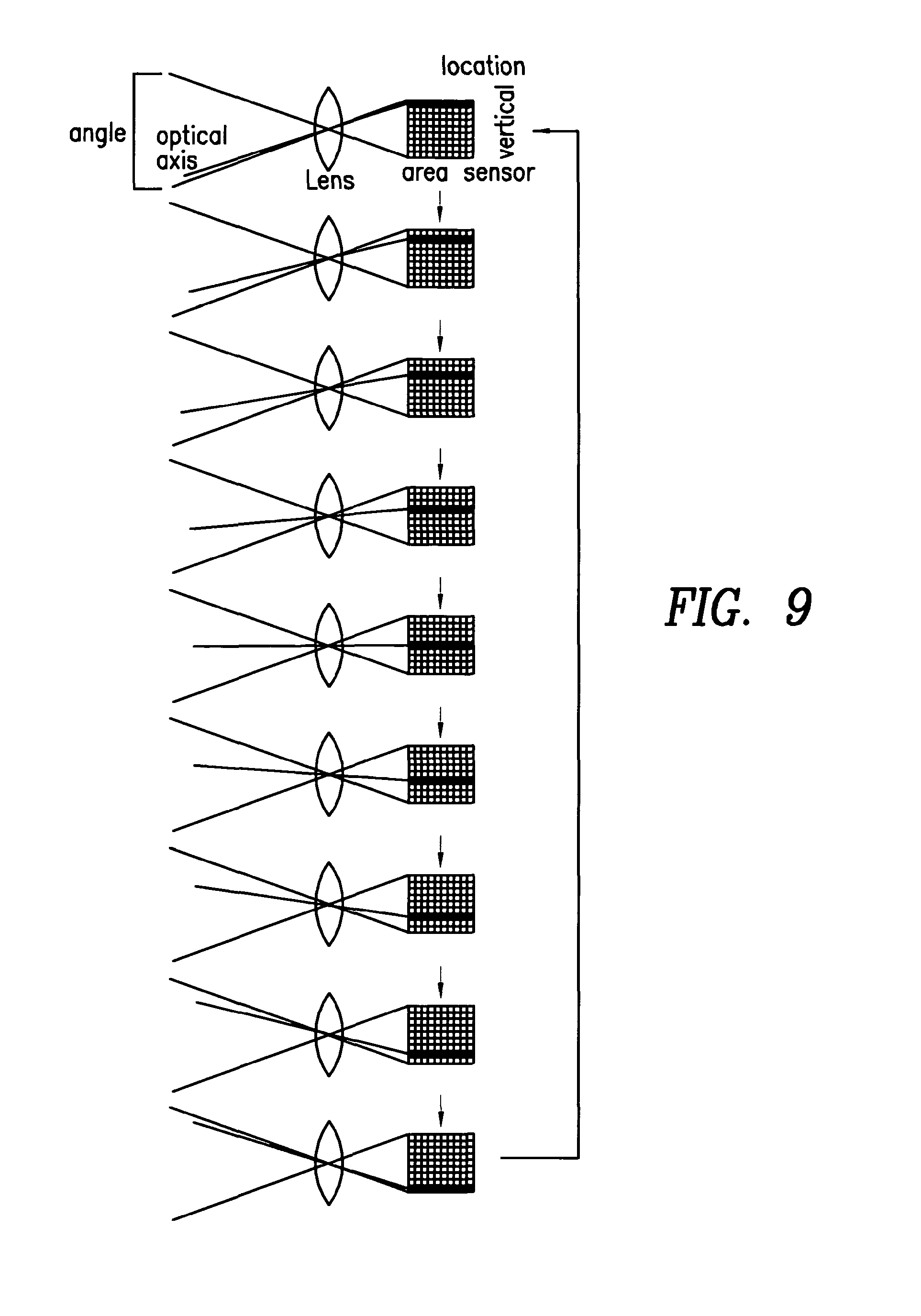