[0001] The present invention relates to an integrated starter generator (ISG) device comprising a housing, a stator and a rotor contained within the housing. The device is preferably used in motor vehicles but may also be used in other applications. It is preferably mechanically coupled, via a pulley, to the ancillary belt of such a vehicle.
[0002] As the demand for electrical power in vehicles has increased, the trend in alternator (generator) design has been towards greater power capacity. At the same time there has been a requirement to make the alternator housing more compact, such that it takes up less space in the vehicle's engine bay.
[0003] Furthermore, a growing need for the reduction of fuel consumption by the internal combustion engine has led to the development of the Integrated Starter Generator (ISG), which represents an alternative to the conventional alternator. Like an alternator, the ISG generates electric power when the engine is running, for supplying the vehicle's electrical system and charging its battery. However, the ISG combines the functions of the conventional alternator/generator with those of the starter motor in a single ISG. Thus, it is capable of being switched from an alternator mode to a starter mode and vice versa. The weight of the ISG is typically less than that of the combined weights of separate alternator and starter motor components and the ISG can automatically stop and then rapidly restart the engine to avoid periods of unnecessary engine idling, such as when a vehicle is waiting at a traffic light. This reduces fuel consumption and exhaust emissions. Furthermore, in starter mode, the ISG is able to spin the engine at higher speeds than a conventional starter motor which further aids in fuel efficient and more reliable starting of the engine.
[0004] Like an alternator, the ISG includes a stator and rotor. However, the dual function of the ISG described above means that it requires other components in addition to those usually found in an alternator. In particular, the ISG includes various electrical components for producing the high current needed for starting the engine. Furthermore, complex electronics are necessary to control efficiently the start-stop function of the ISG or to communicate with the engine management systems of a vehicle. Moreover, the ISG faces the same requirement for compactness as the conventional alternator.
[0005] A typical belt-driven ISG (BISG) has a housing containing a rotor and a stator. The electrical connections for the rotor and stator exit the housing and lead to a separate control unit which is preferably located nearby. The rotor and stator electrical connections typically carry high currents of the order of several hundred amps and in a switched reluctance arrangement are also switched many thousands of times a second during operation. Thus the cabling between the ISG housing and the control unit is bulky, inflexible and heavy because of the high current requirements, and presents a significant EMC challenge due to the rapidly-switched high currents flowing in the cables. Furthermore, the relatively long cabling introduces electrical losses. Also, the need to mitigate these problems by minimising the length of the cabling and mounting a control unit near to the BISG in what is typically a crowded area of an engine bay, presents further challenges. These aspects of conventional ISGs have hindered the uptake of these devices despite their significant advantages.
[0006] US 6396161 discloses a marine device that is an integrated starter, alternator and trolling motor. The device is an induction machine that uses the flywheel of an associated marine internal combustion engine as the induction machine rotor, and the stator and an electronics module (carrying power electronics and control circuitry) are mounted inside the flywheel. Cooling of elements in the electronics module is aided because the device is intended for use with a marine engine and so an ample supply of water will be available for cooling during operation of the engine. The device may include an independent housing rather than being contained within the flywheel. The device may be another motor type, such as a permanent magnet motor or a switched reluctance motor rather than an induction machine.
[0007] According to the present invention as set out in claim 1, there is provided an integrated starter generator device comprising a housing, a switched reluctance machine, and control electronics operable to configure the device as either a starter or generator, the switched reluctance machine comprising stator windings and a rotor contained within the housing, the control electronics being contained entirely within the housing, wherein the control electronics are operable to switch the stator windings of the switched reluctance machine; wherein the stator windings are terminated within the housing, characterised in that the control electronics include a power printed circuit board (PCB), the stator windings are terminated at the said power PCB; the switching of the stator windings is carried out using power Field Effect Transistors (FETs) and the FETs are located around the periphery of the power PCB.
[0008] Optional aspects of the invention are set out in the remaining claims.
[0009] By integrating the control electronics in the housing, the need to run bulky cabling to a separate control unit is removed. Furthermore because the housing is typically manufactured from an electrically conductive material such as aluminium, the EMC generated by the switching currents is further shielded and contained by the well known Faraday-cage effect.
[0010] Preferred embodiments of the present invention will now be more particularly described, by way of example, with reference to the accompanying drawings in which:

Figure 1 shows an integrated starter generator machine (ISG) for the engine of a vehicle;

Figure 2 shows a front elevation of the ISG of Figure 1;

Figure 3 shows a rear elevation of the ISG of Figure 1;

Figure 4 shows an internal view of the elevation of Figure 3 with the rear cover removed;

Figure 5 shows the interior of the housing of the ISG of Figure 1 with the front cover removed;

Figure 6 shows the top mask layer of a power PCB;

Figure 7 shows an internal layer of a power PCB of Figure 6;

Figure 8 shows a sectional view of the ISG of Figure 2 along line A-A;

Figure 9 shows a sectional view of the ISG of Figure 2 along line B-B;

Figure 10 shows a sectional view of the ISG of Figure 2 along line C-C;

Figure 11 shows the interior of the housing of the ISG of Figure 1 with stator windings in place;

Figure 12A shows an elevation of a high current terminal;

Figure 12B shows a perspective view of the terminal of Figure 12A;

Figure 12C shows a section through the terminal of Figure 12A;

Figure 14 shows a perspective view of the ISG of Figure 13; and

Figure 15a shows an elevation of the alternative B terminal of Figure13;

Figure 15b shows an perspective view of the alternative B terminal of Figure13; and

Figure 15c shows a longitudinal cross-sectional view of the alternative B terminal of Figure 13. 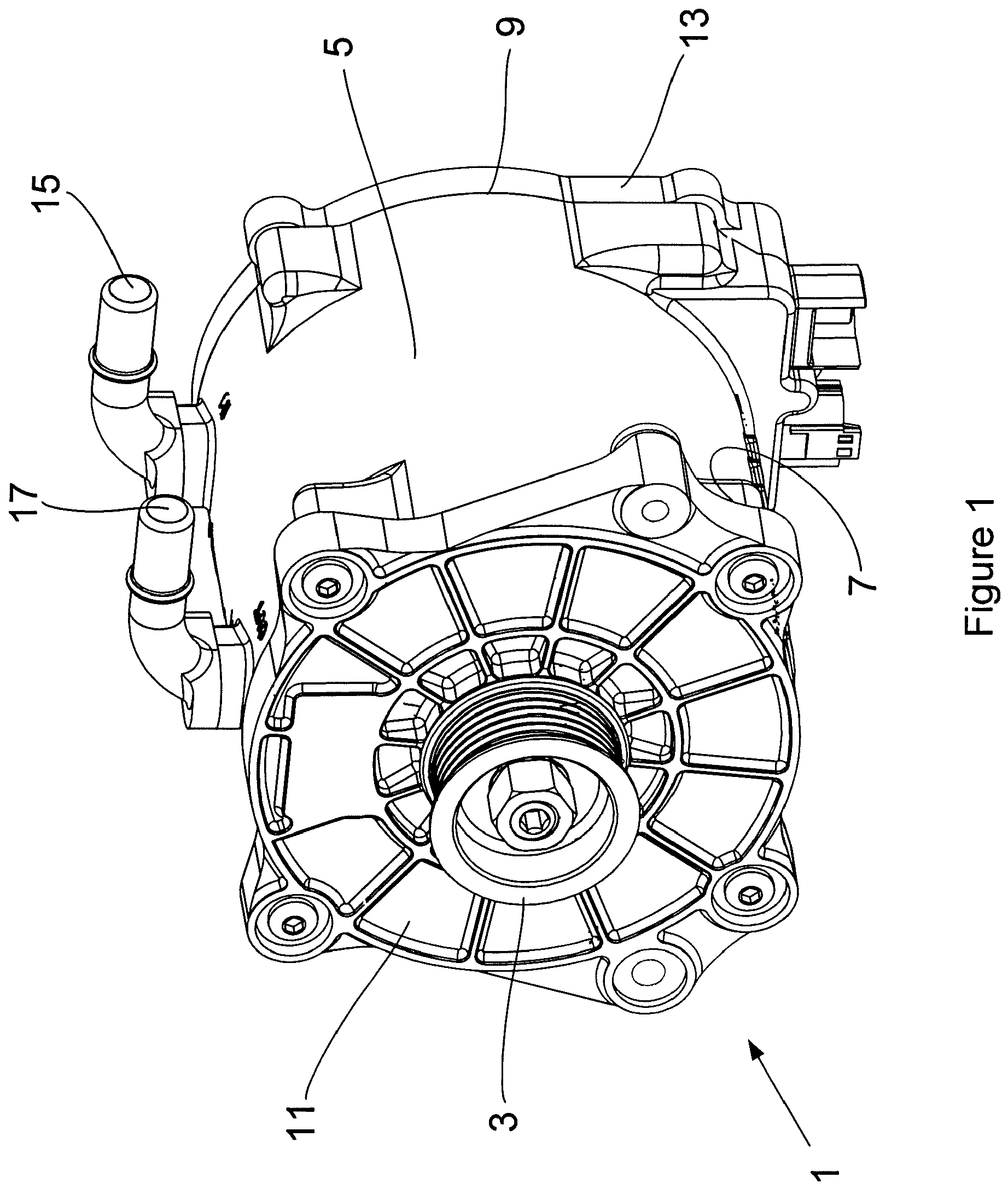 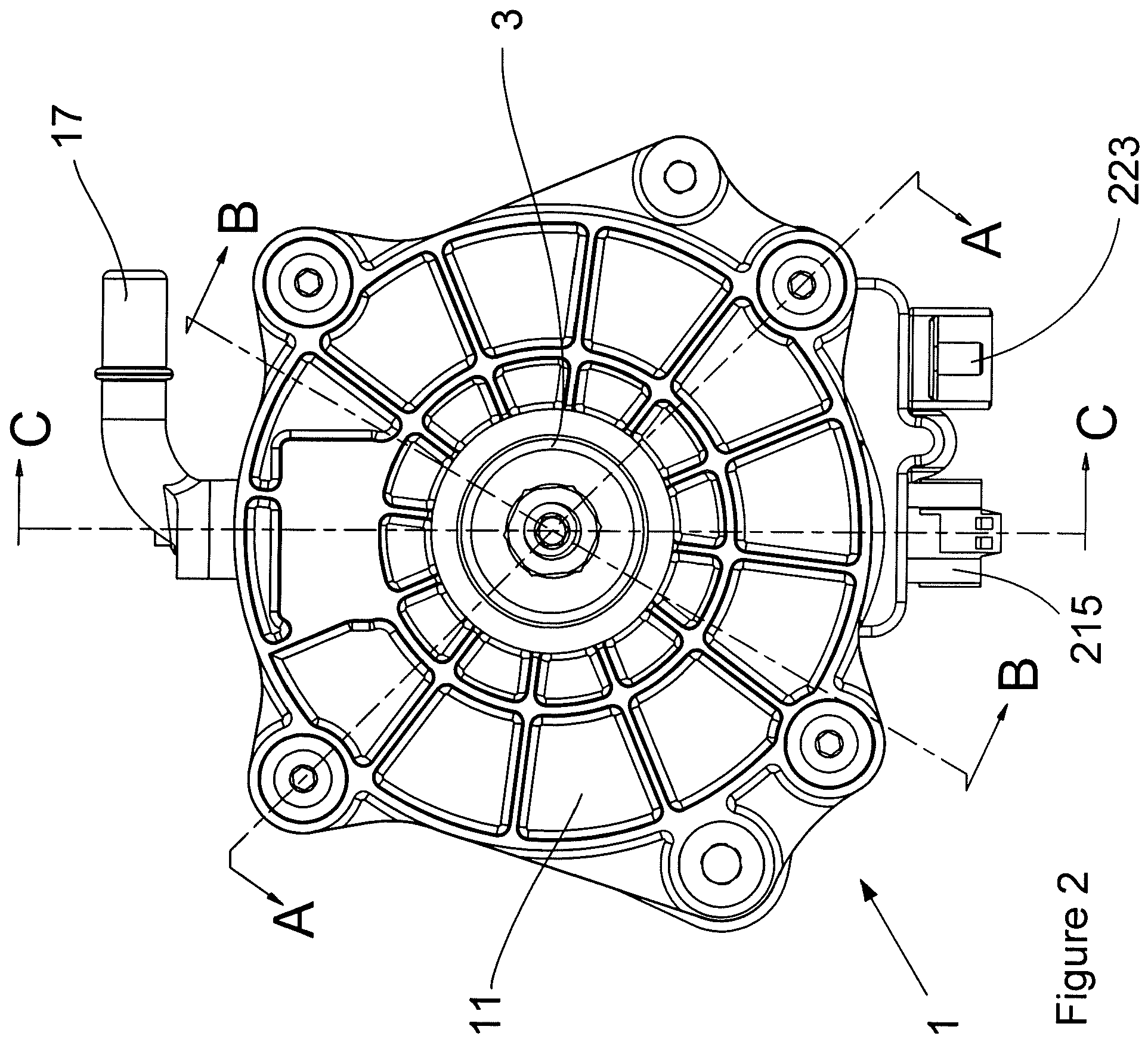 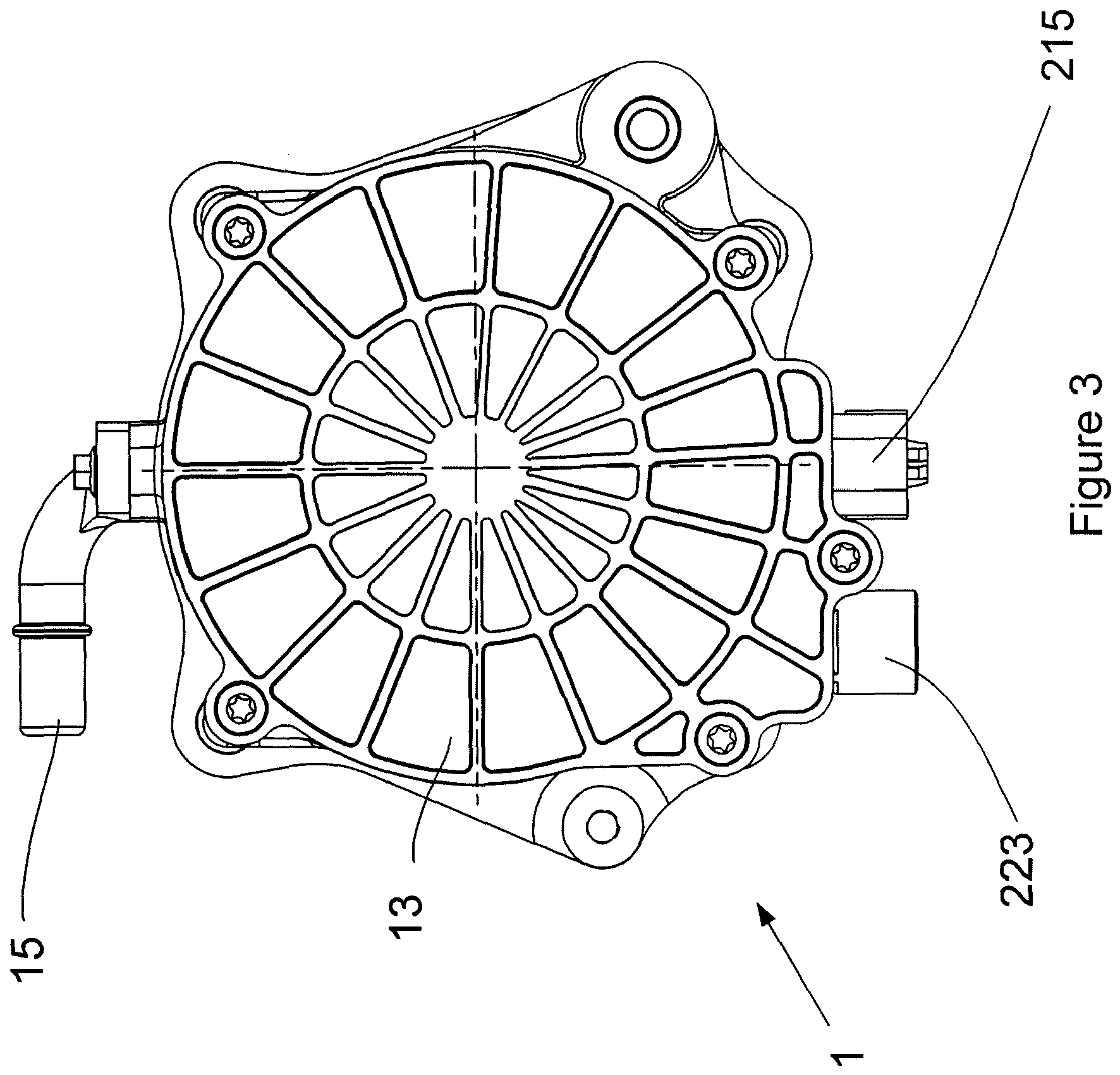 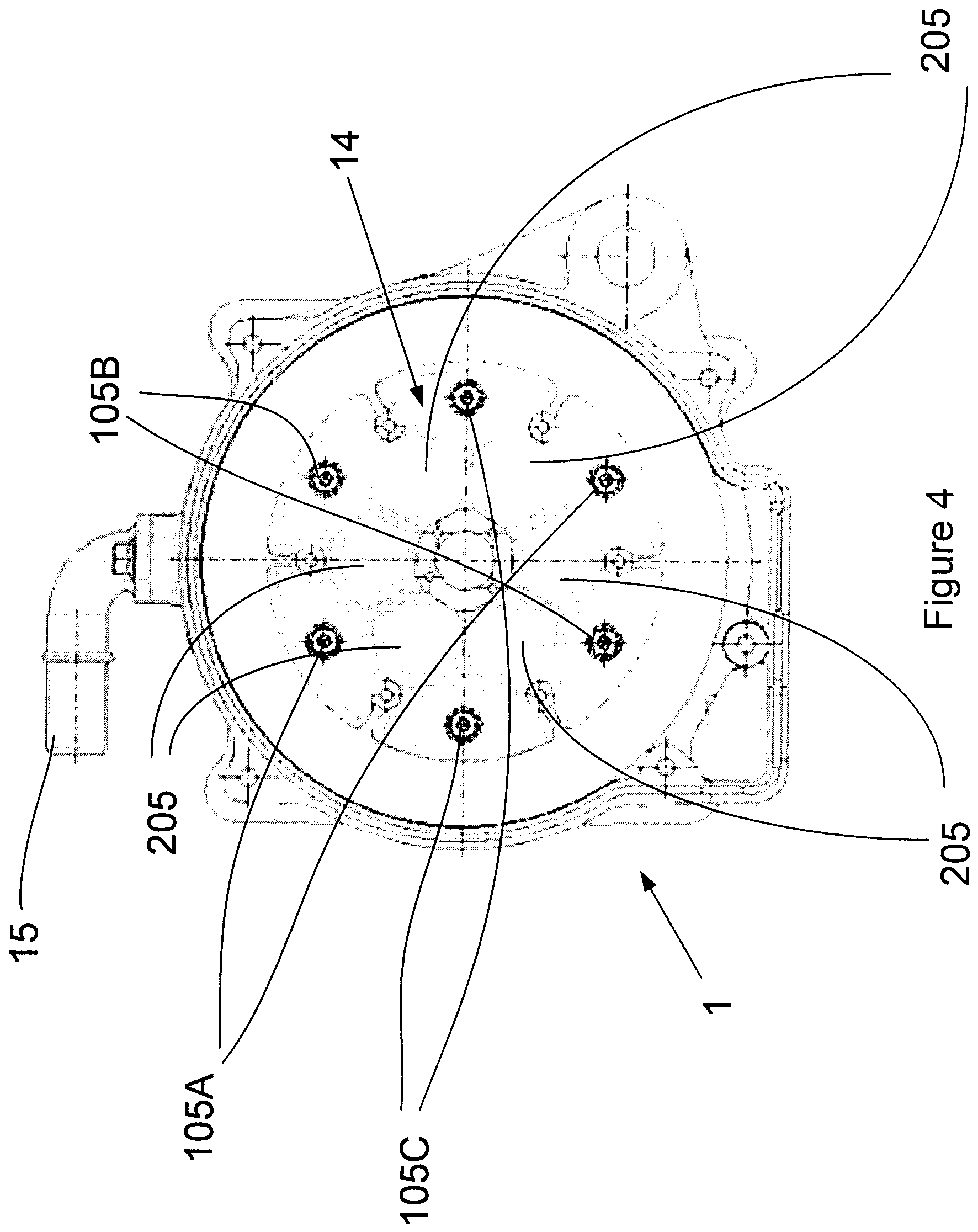 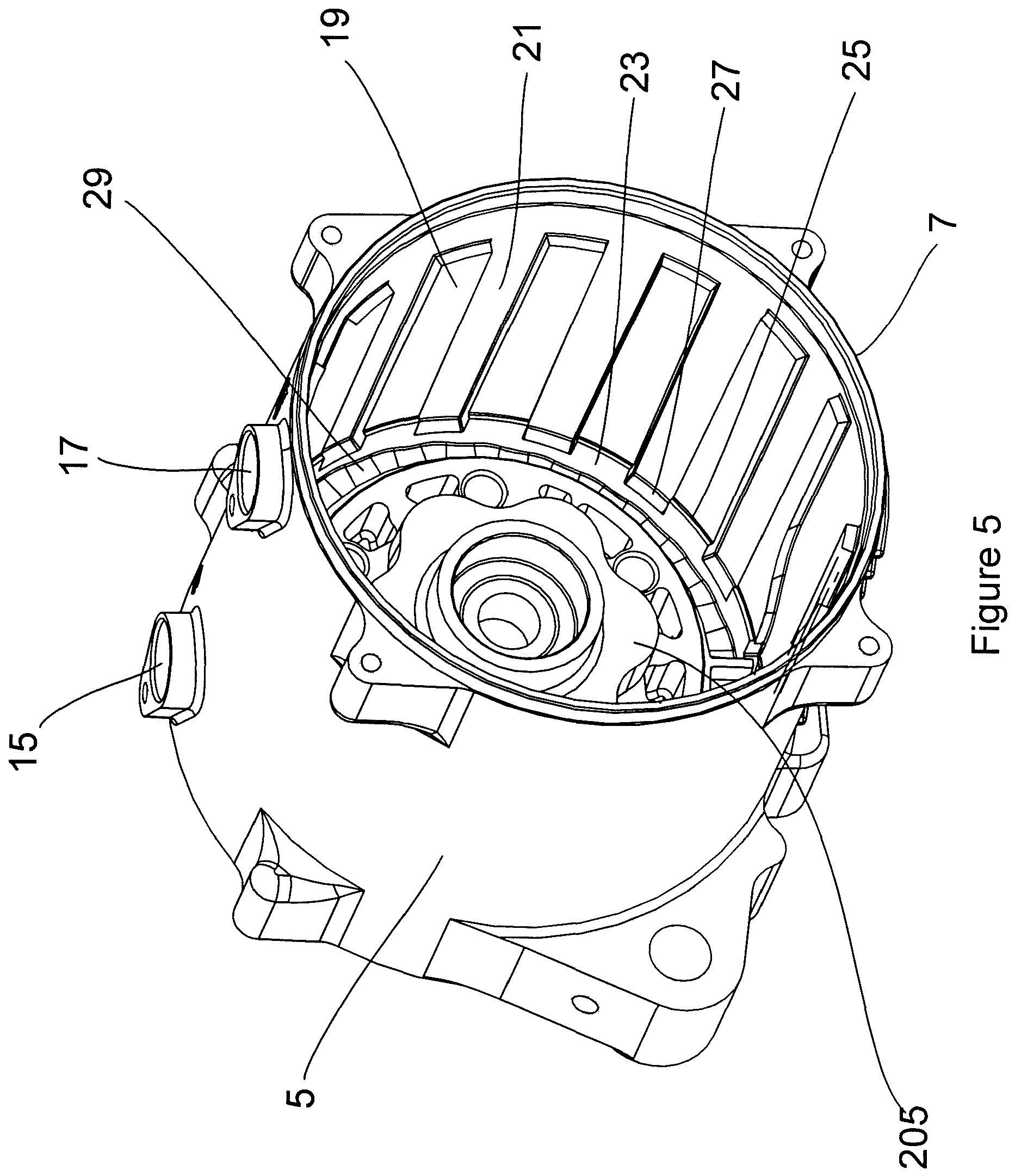 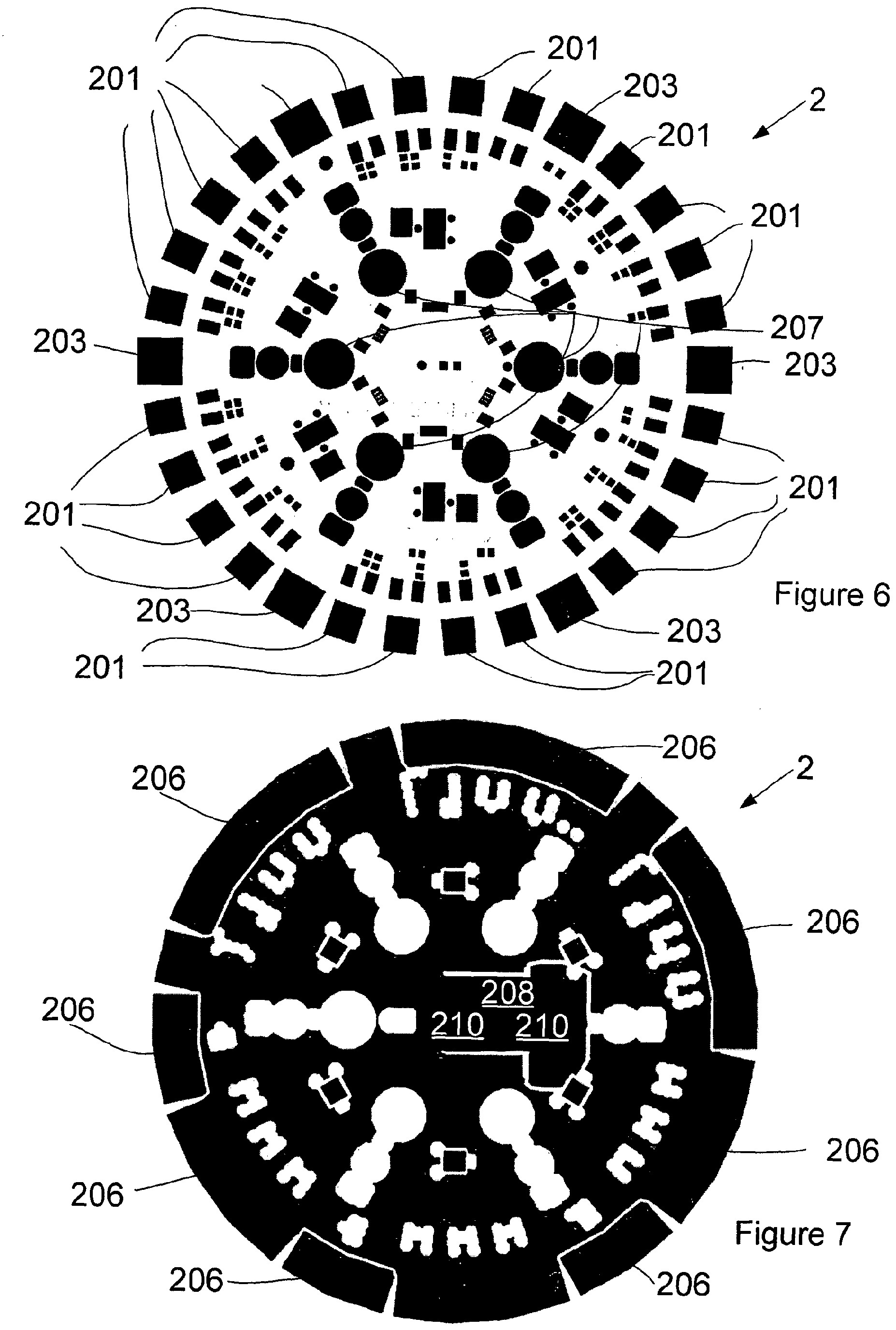 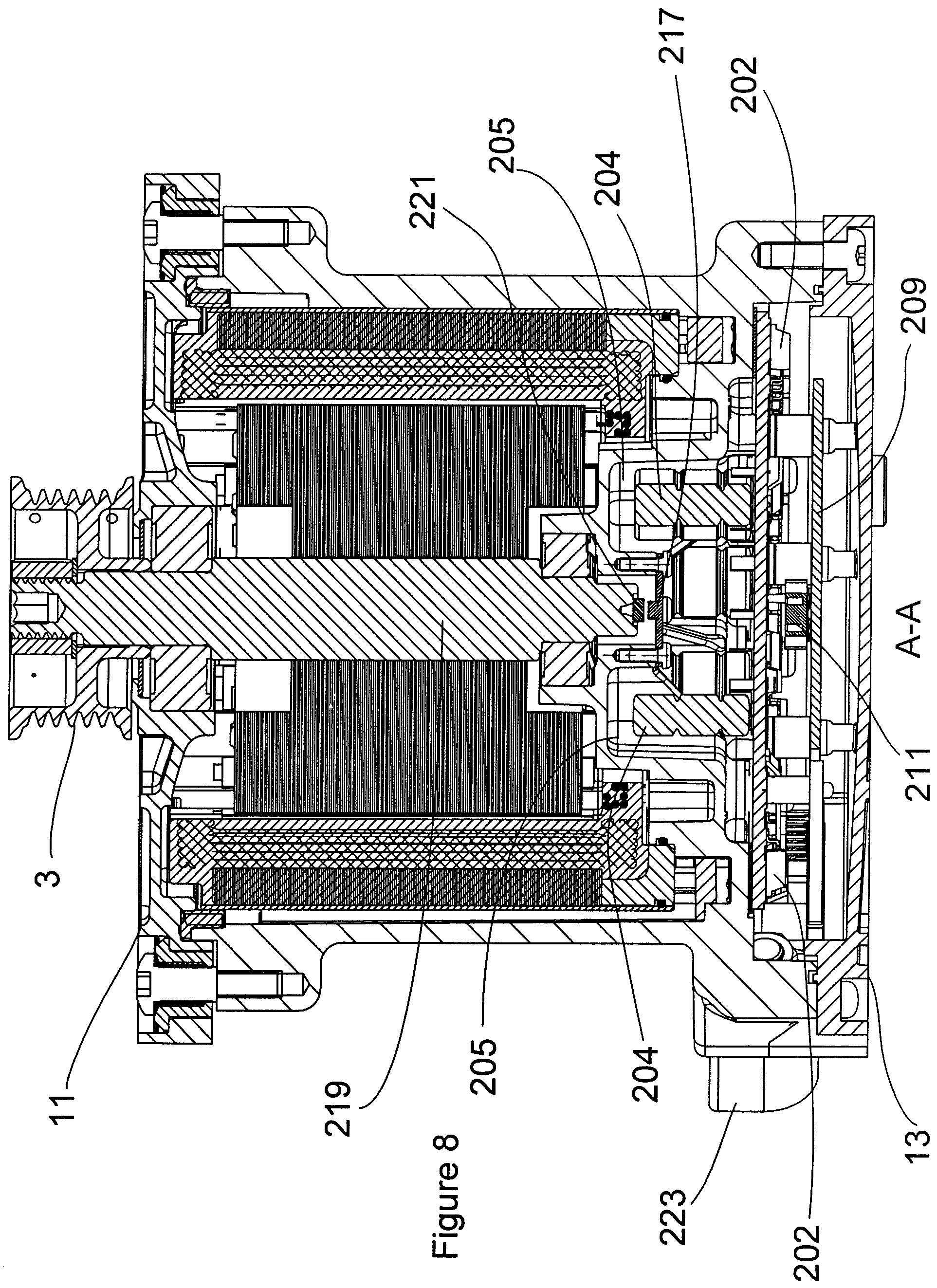 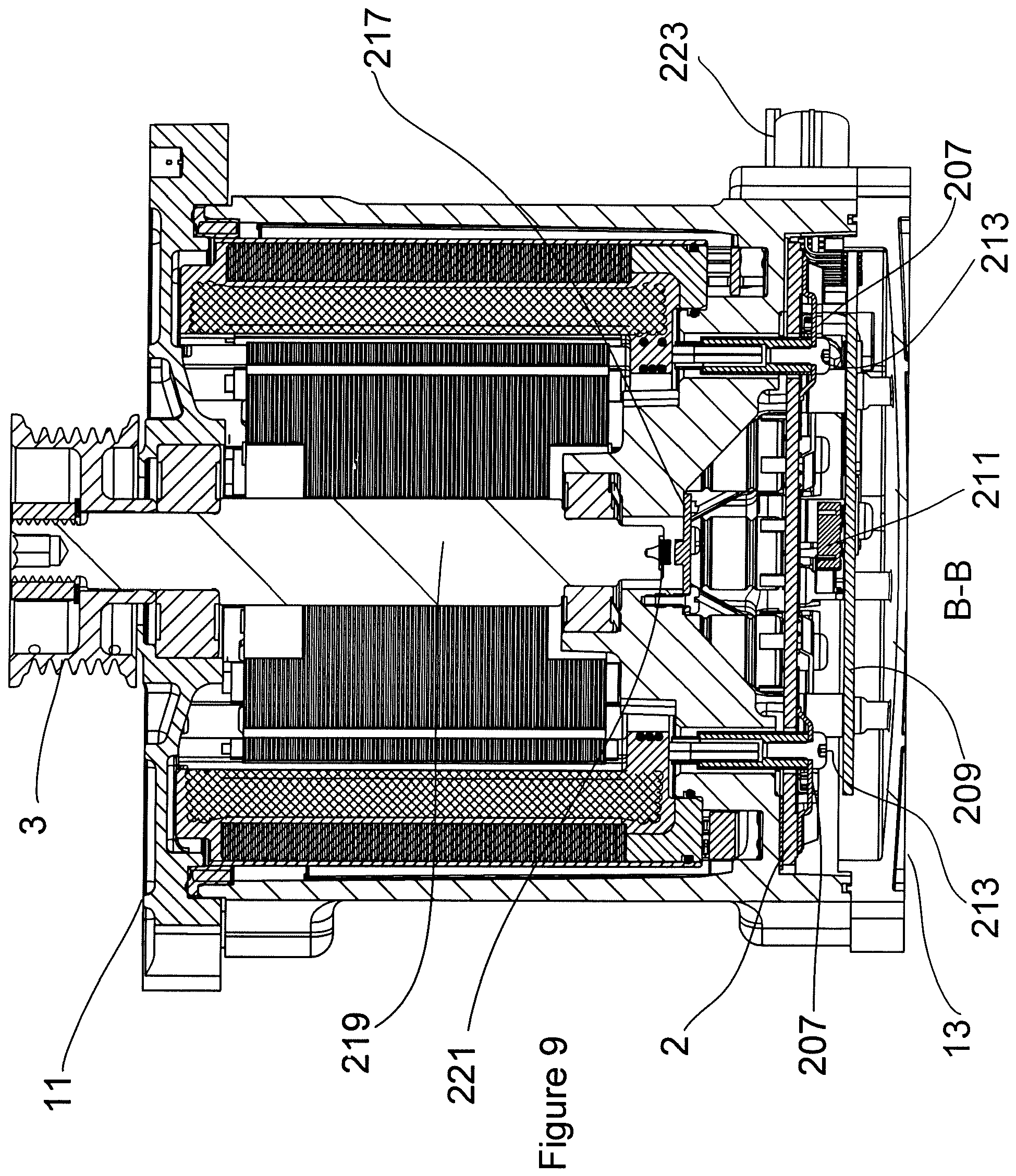 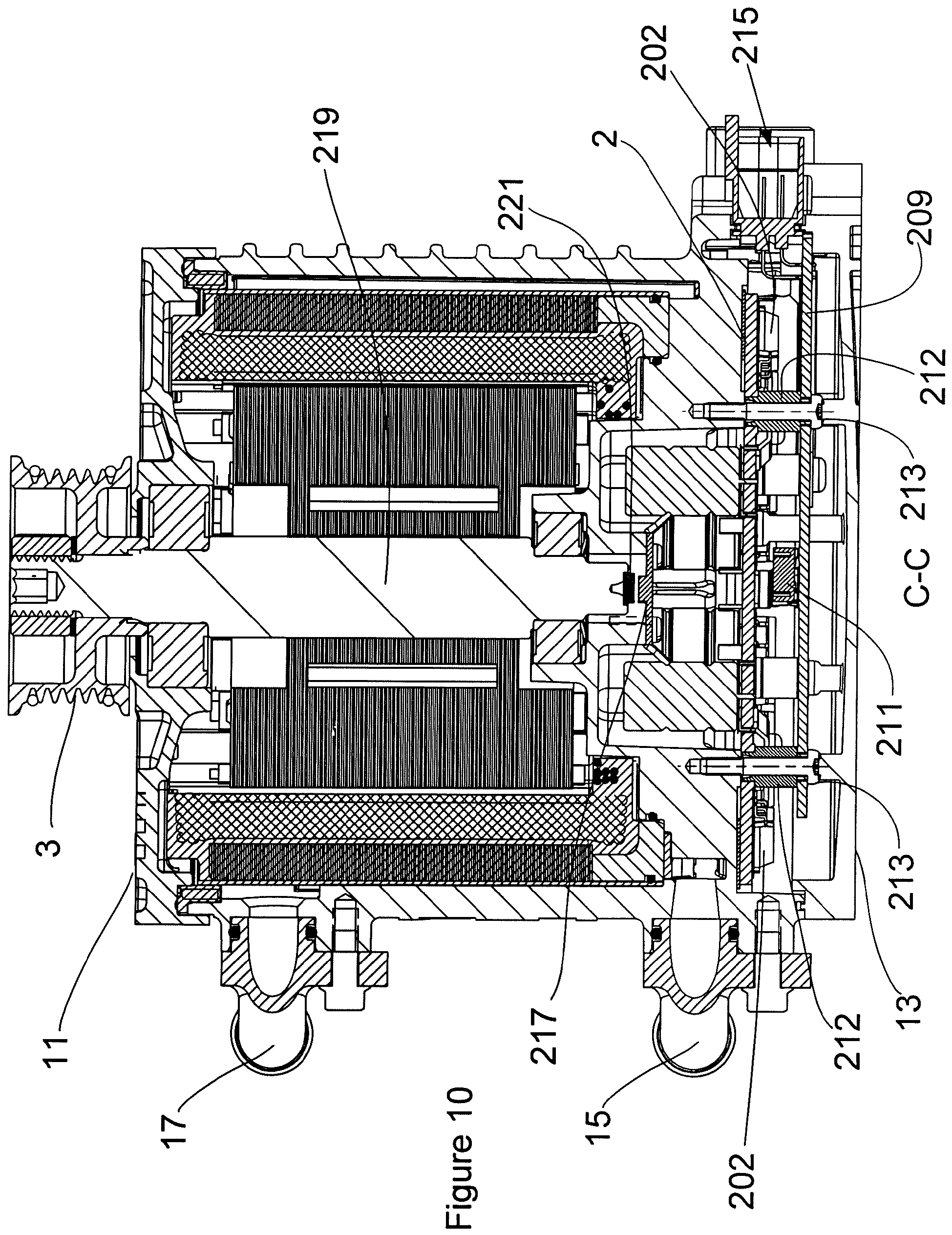 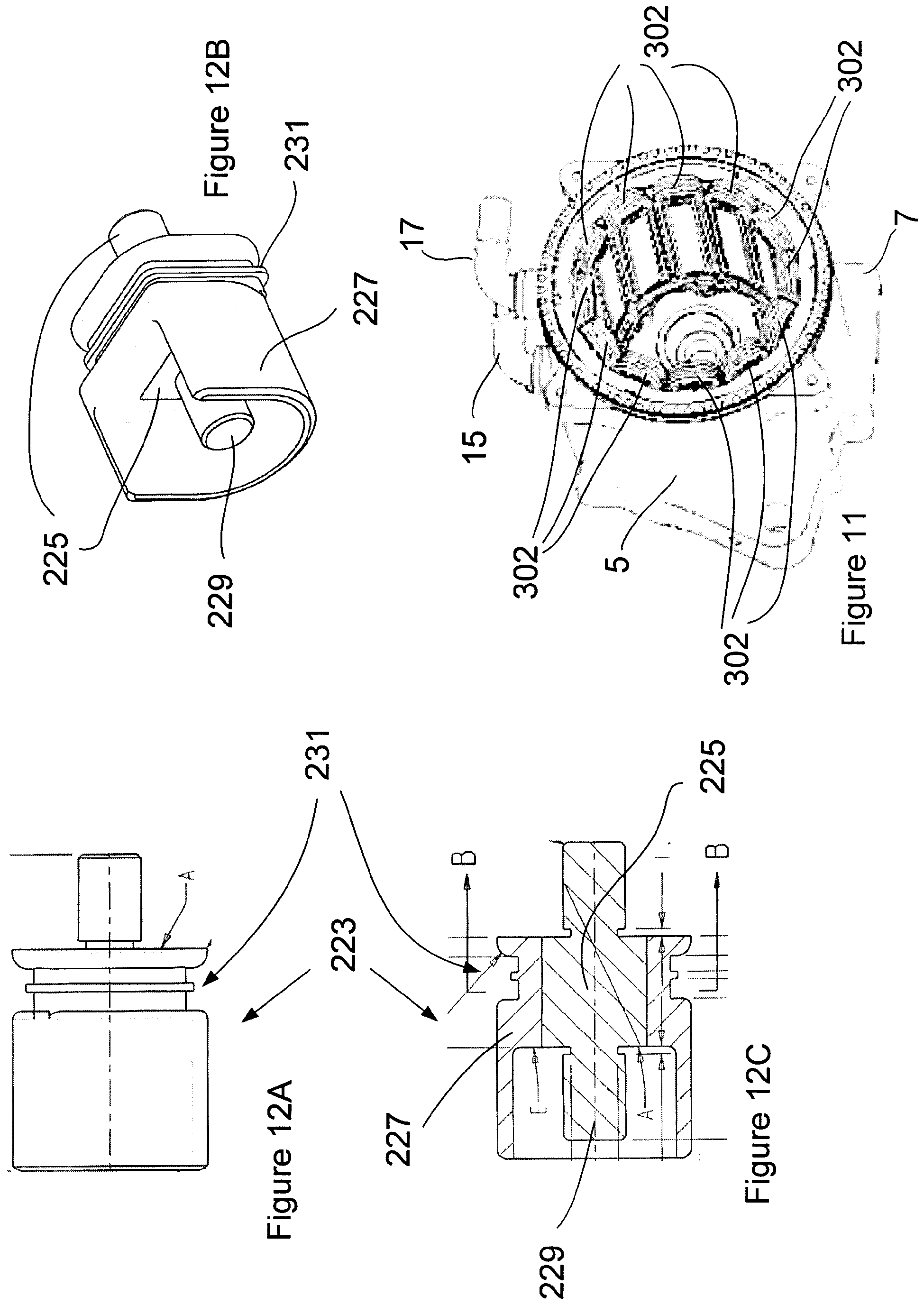 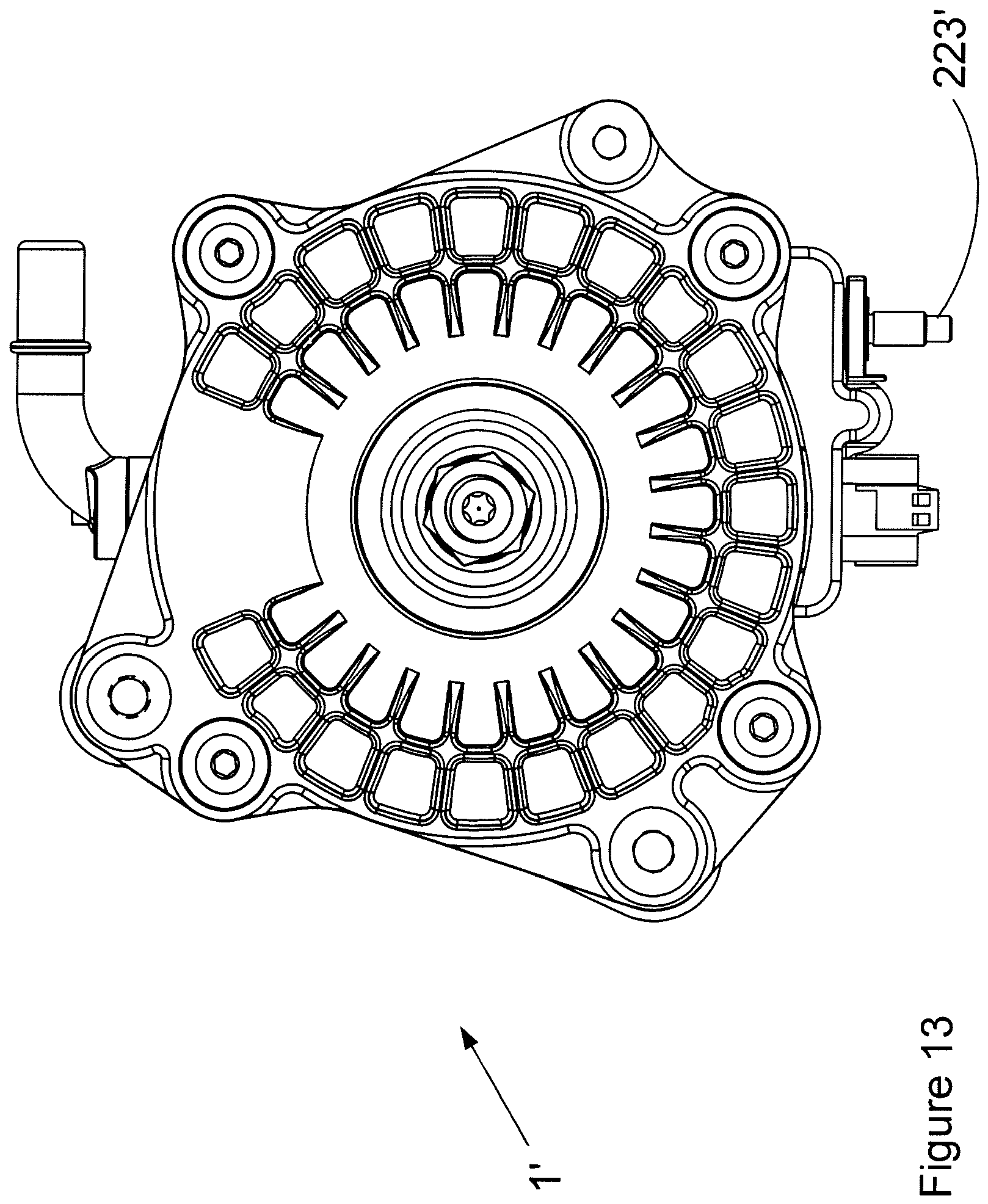 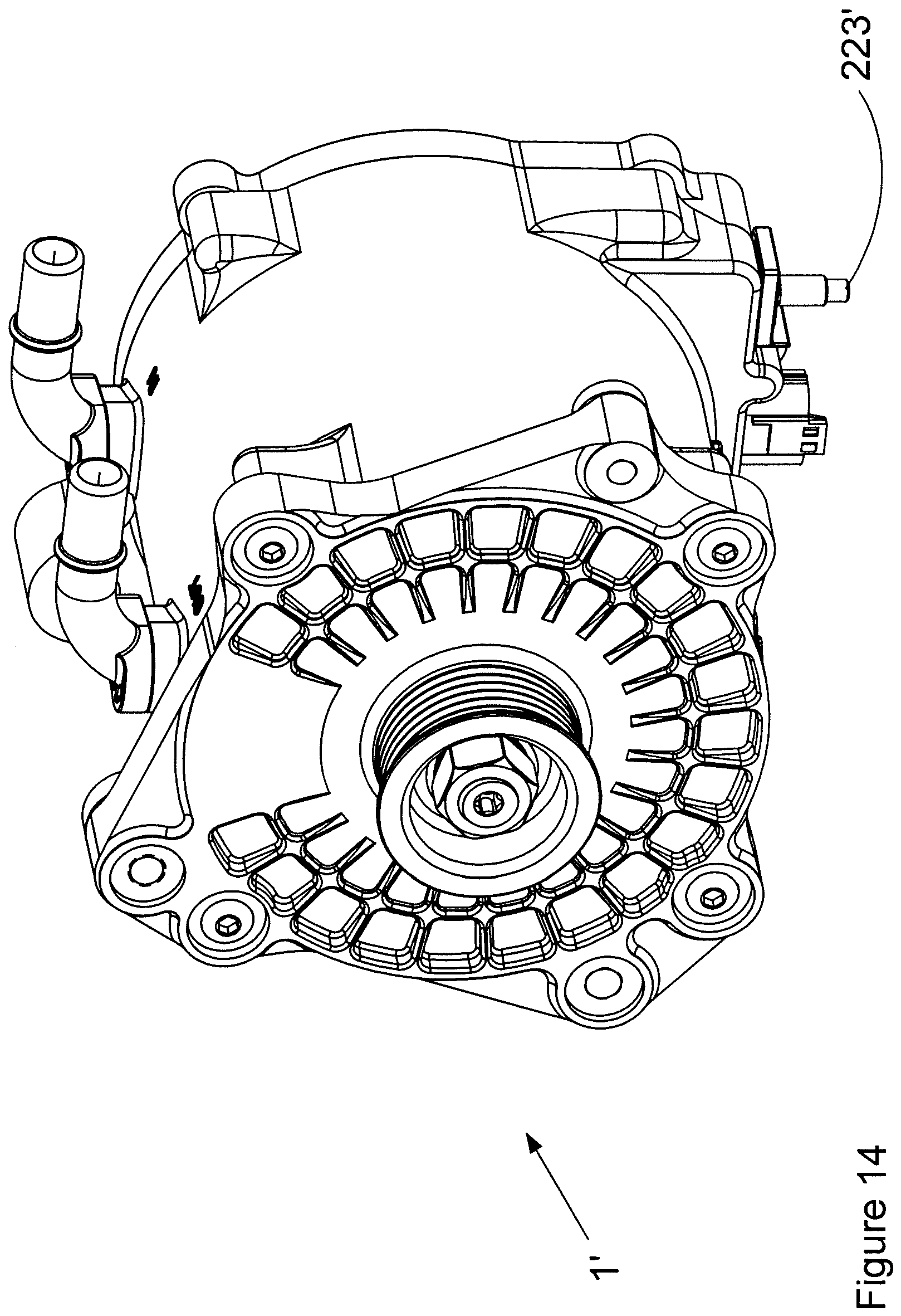 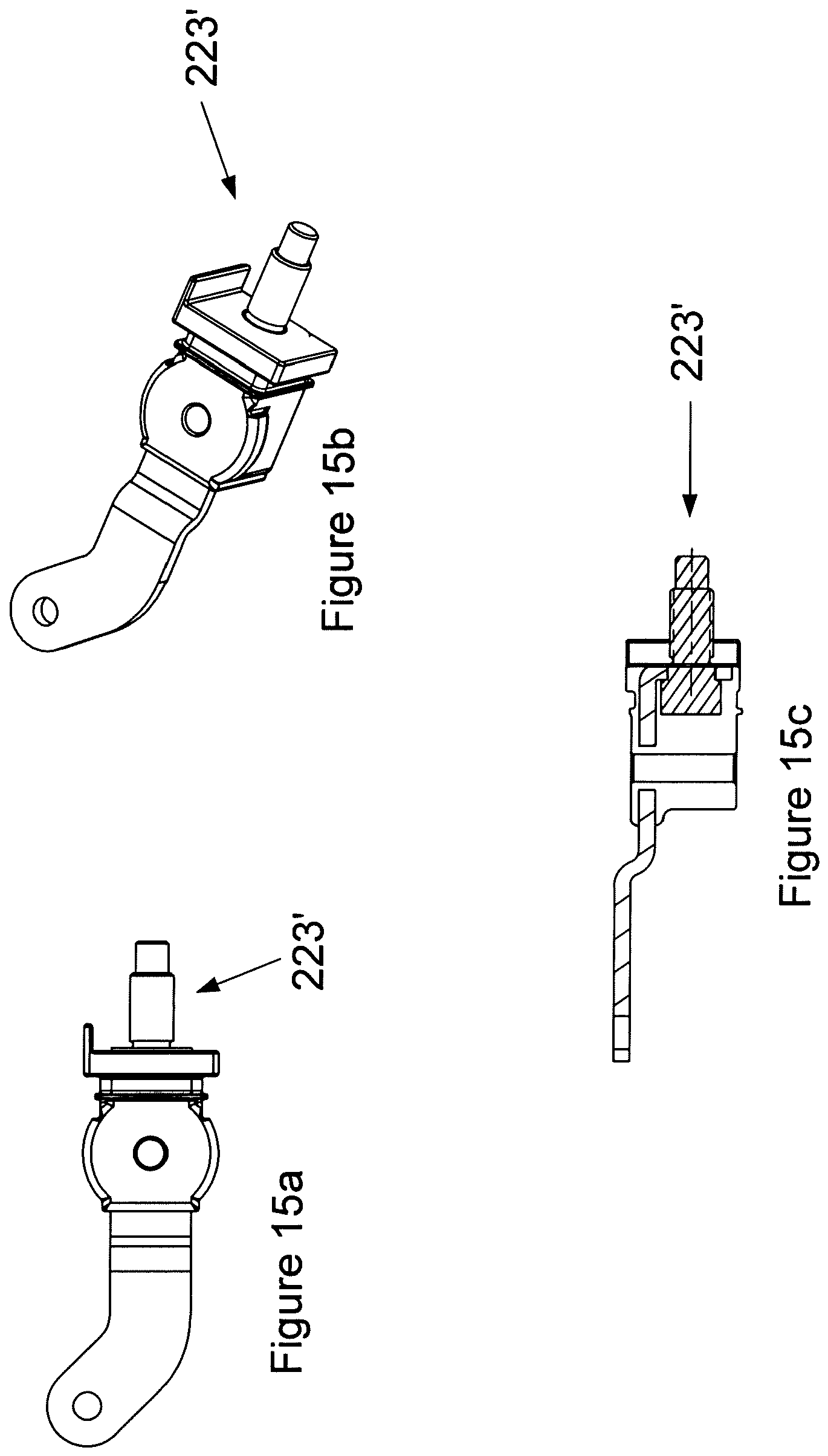