[0001] The disclosure relates to investment casting. More particularly, it relates to the investment casting of superalloy turbine engine components.
[0002] Investment casting is a commonly used technique for forming metallic components having complex geometries, especially hollow components, and is used in the fabrication of superalloy gas turbine engine components.
[0003] Gas turbine engines are widely used in aircraft propulsion, electric power generation, and ship propulsion. Cooling of engine components (especially of the turbine section(s)) is provided by flowing relatively cool air from the compressor section(s) of the engine through passageways in the components to be cooled.
[0004] For cast components, the cooling passageways may be created using casting cores that are later leached out of the casting. Commonly-assigned U.S. Patent Nos. 6,637,500 of Shah et al., 6,929,054 of Beals et al., 7,014,424 of Cunha et al., 7,134,475 of Snyder et al., and U.S. Patent No. 7,438,527 of Albert et al. (the disclosures of which are incorporated by reference herein as if set forth at length) disclose use of ceramic core and refractory metal core (RMC) combinations. The refractory metal cores may be formed from sheet metal (e.g., sheet stock of molybdenum or molybdenum-based alloys).
[0005] In certain other industries, asymmetries associated with punching of sheet metal have been observed. In punching, an approximately cylindrical (although not necessarily a circular cylinder) punch may be driven through a piece of metal from a first face side. Along the opposite second face side, the metal is supported by a die having an aperture shape complementary to the punch to receive the coupon of metal punched by the punch, As the punch enters the metal, it locally shears the coupon creating a relatively cylindrical surface very close to the punch cross-section. The engagement of the punch produces high stress concentrations in the material below the shear zone. At some point in the travel of the punch, the stresses are high enough that the material fractures (breaks/ruptures) between the shear zone and the second face. The fracture causes the punched hole to diverge toward the second face. In the situation of a circular punch, the fracture zone is approximately frustoconical.

FIG. 1 is a schematic sectional view of a first punching operation.

FIG. 2 is a schematic exploded view of a second punching operation.

FIG. 3 is a schematic exploded view of a third punching operation.

FIG. 4 is a schematic view of an RMC.

FIG. 6 is a sectional micrograph of a first punched hole.

FIG. 7 is a sectional micrograph of a second punched hole.

FIG. 12 is a plan view of a refractory metal core.

FIG. 13 is a sectional view of a casting before deshelling/decoring.

FIG. 16 is a flowchart of an exemplary casting process.

1. A method for engineering a cast part, the cast part having internal passageways including a slot, the slot being cast over a metallic sheet casting core, wherein:

the metallic sheet casting core has:

a second face opposite the first face; and

a plurality of holes extending between the first and second faces;

5. A metallic casting core or core substrate having:

a second face opposite the first face;

a lateral perimeter; and

a plurality of through-holes,

a pattern material having an airfoil portion; and

a casting core combination at least partially embedded in the pattern material and comprising:

a metallic casting core or core substrate of claim 0; and

at least one additional casting core.

9. The pattern of claim 8 wherein:

the first and second faces are parallel.

a thickness between said first and second faces is 0.2-2.5mm over a majority of an area of the metallic casting core.

molding the at least one additional core of a ceramic; and

removing the pattern material from the shelled pattern for forming a shell;

introducing molten alloy to the shell; and

a pressure side extending between the leading edge and

a suction side extending between the leading edge and

discharge slot having a plurality of posts,

14. A cast part, the cast part having internal passageways including a slot, the slot having a first face and a second face and including a plurality of posts extending between the first and second faces, the slot being subject to differences in thermal mechanical stress across said slot, characterized by:

the article has an airfoil;

the passageway is a trailing edge slot; and 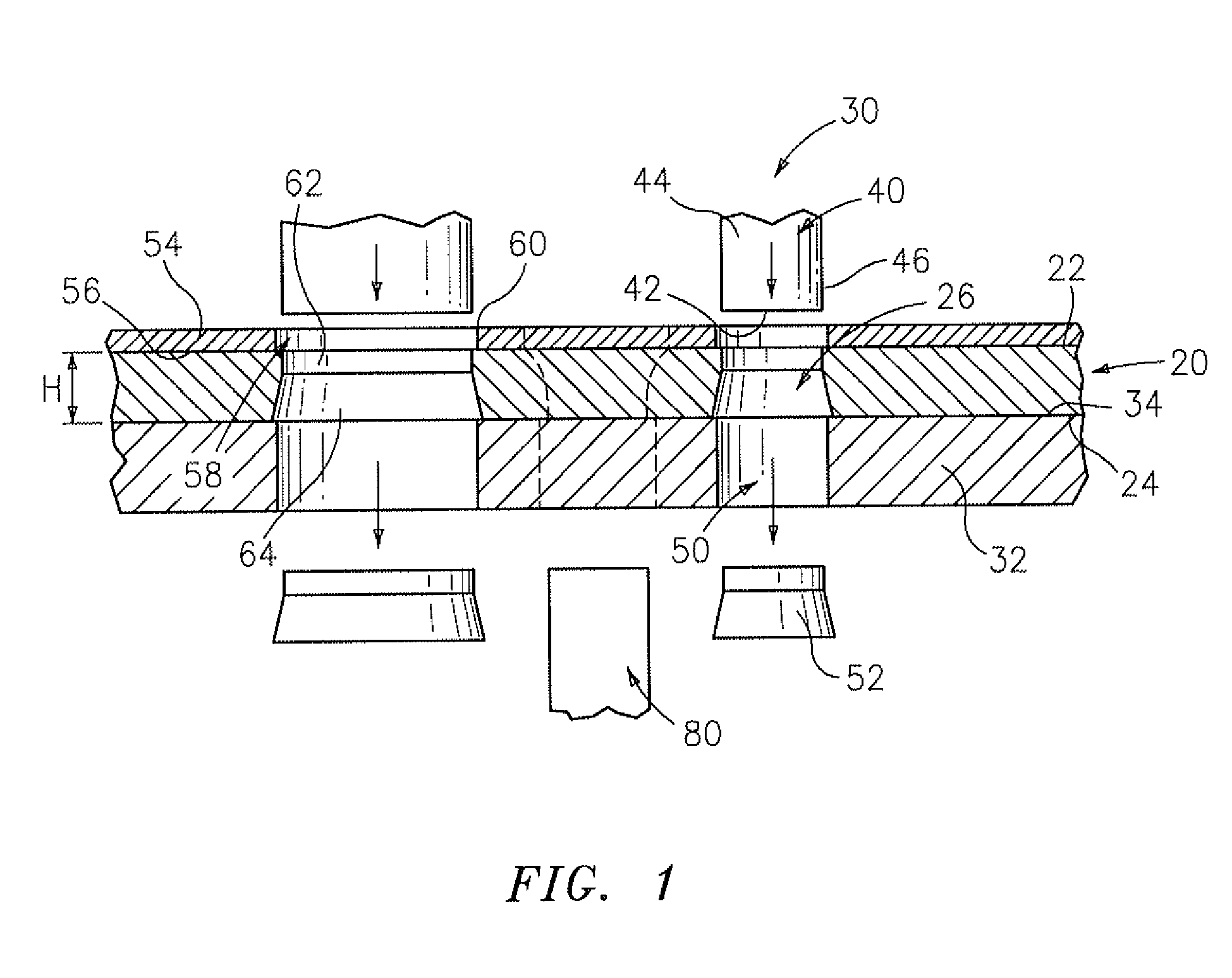 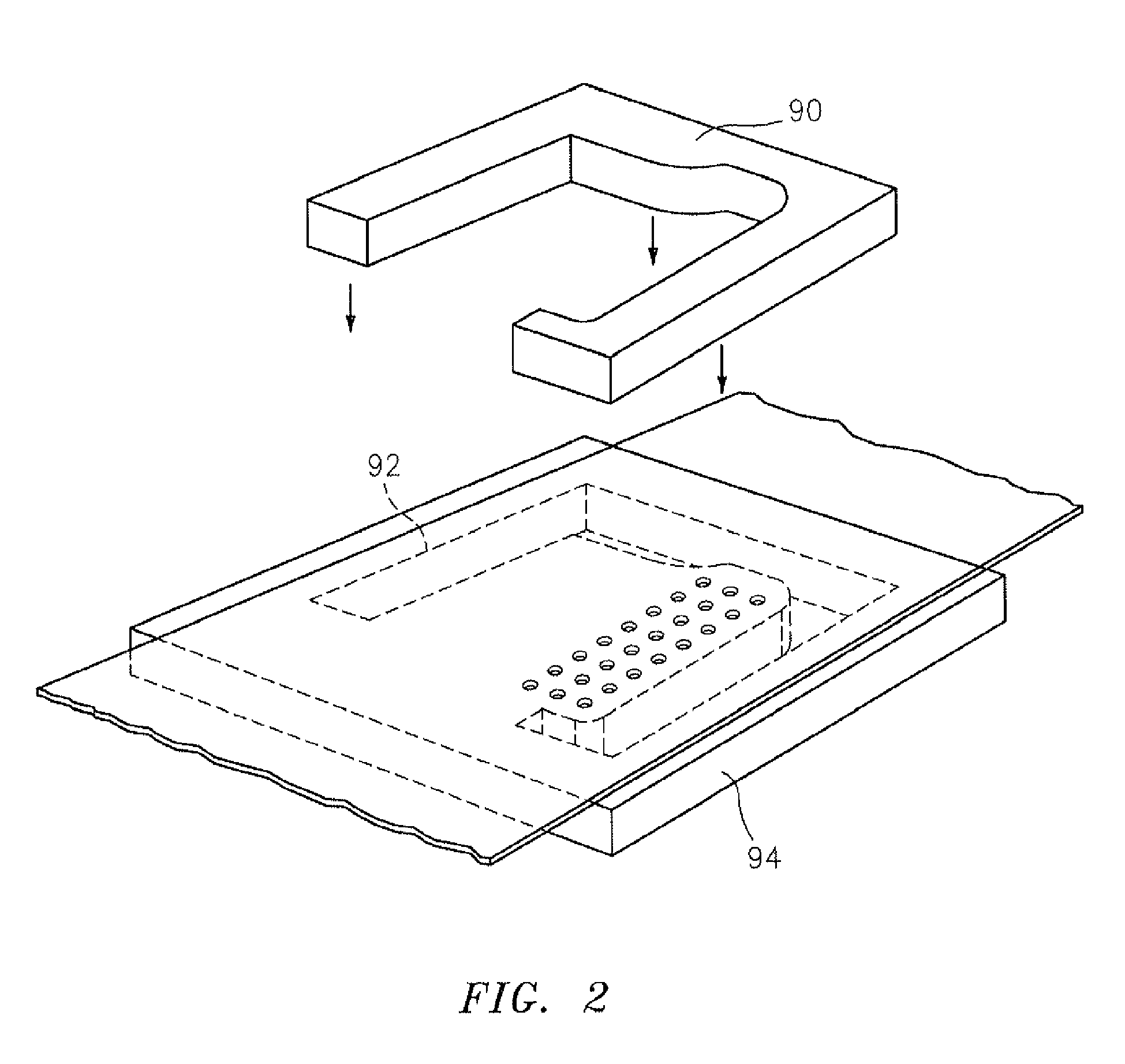 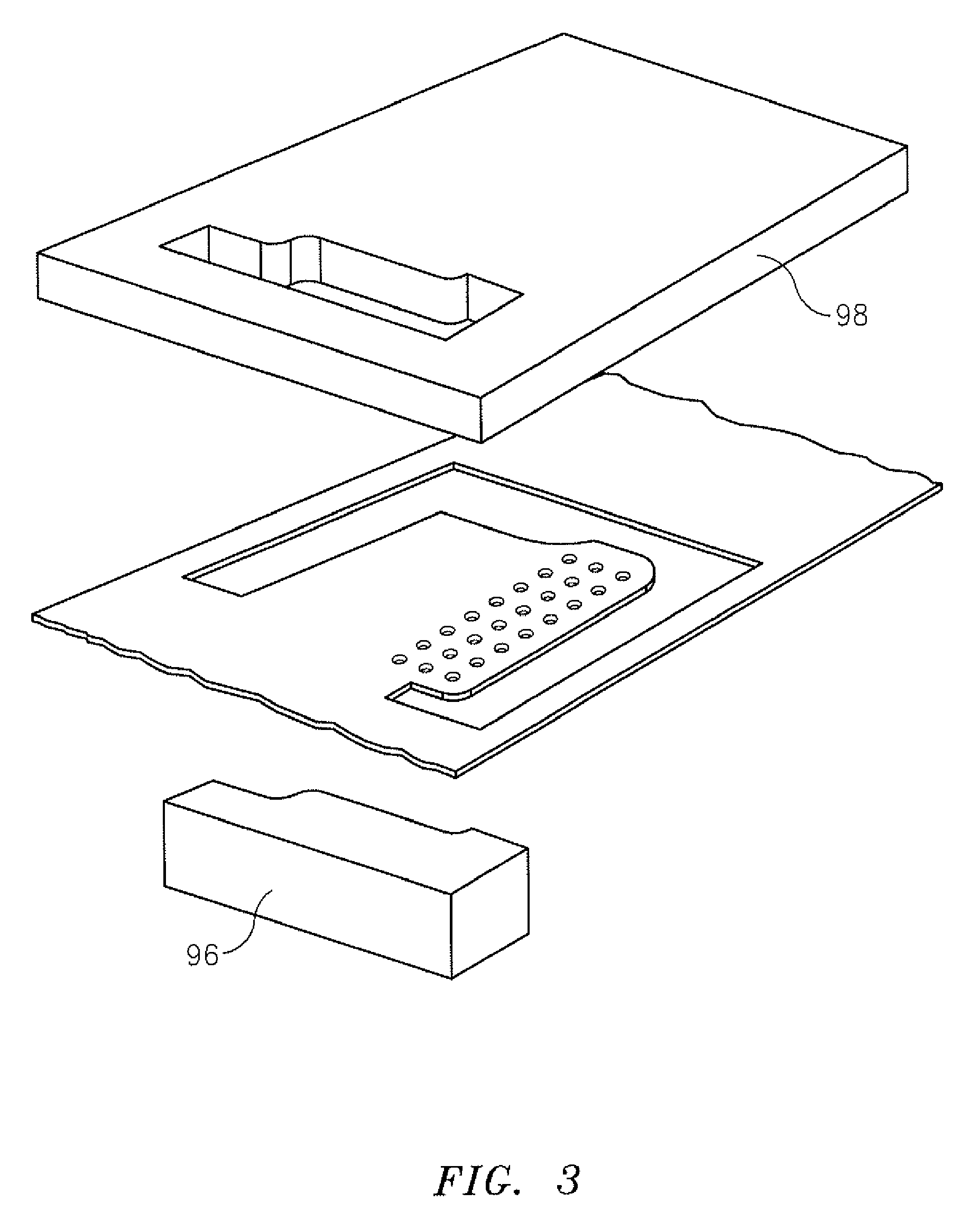 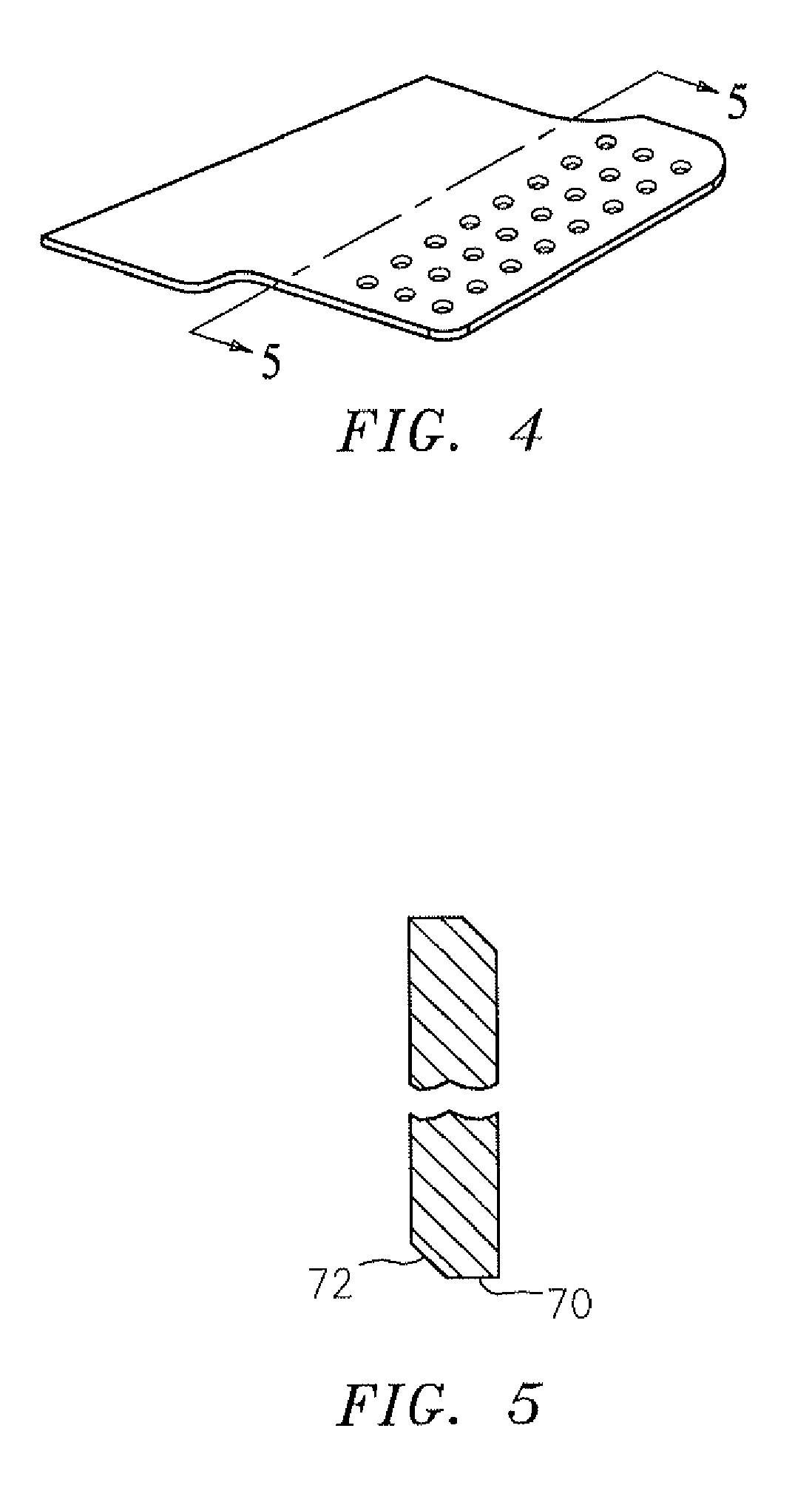 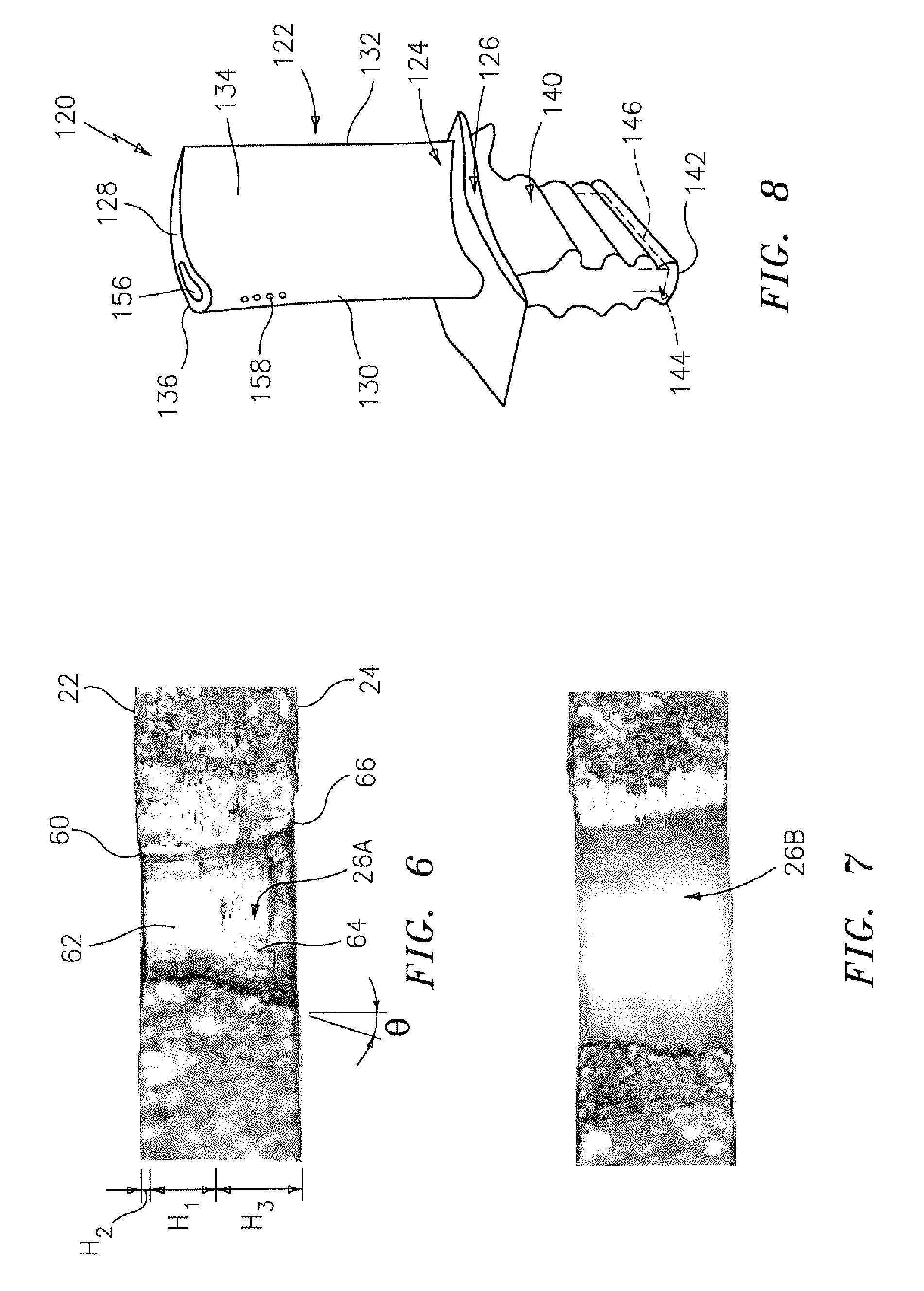 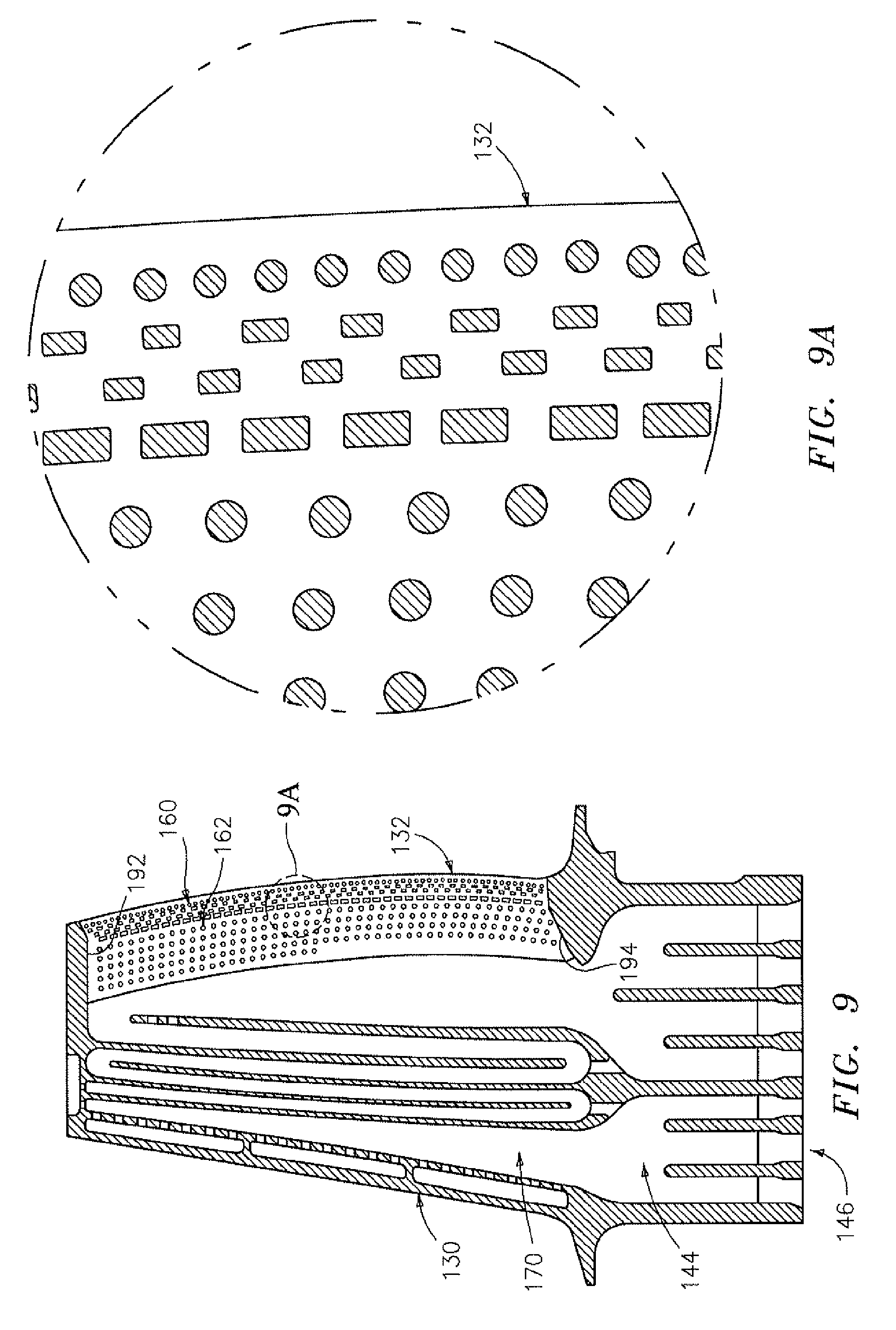 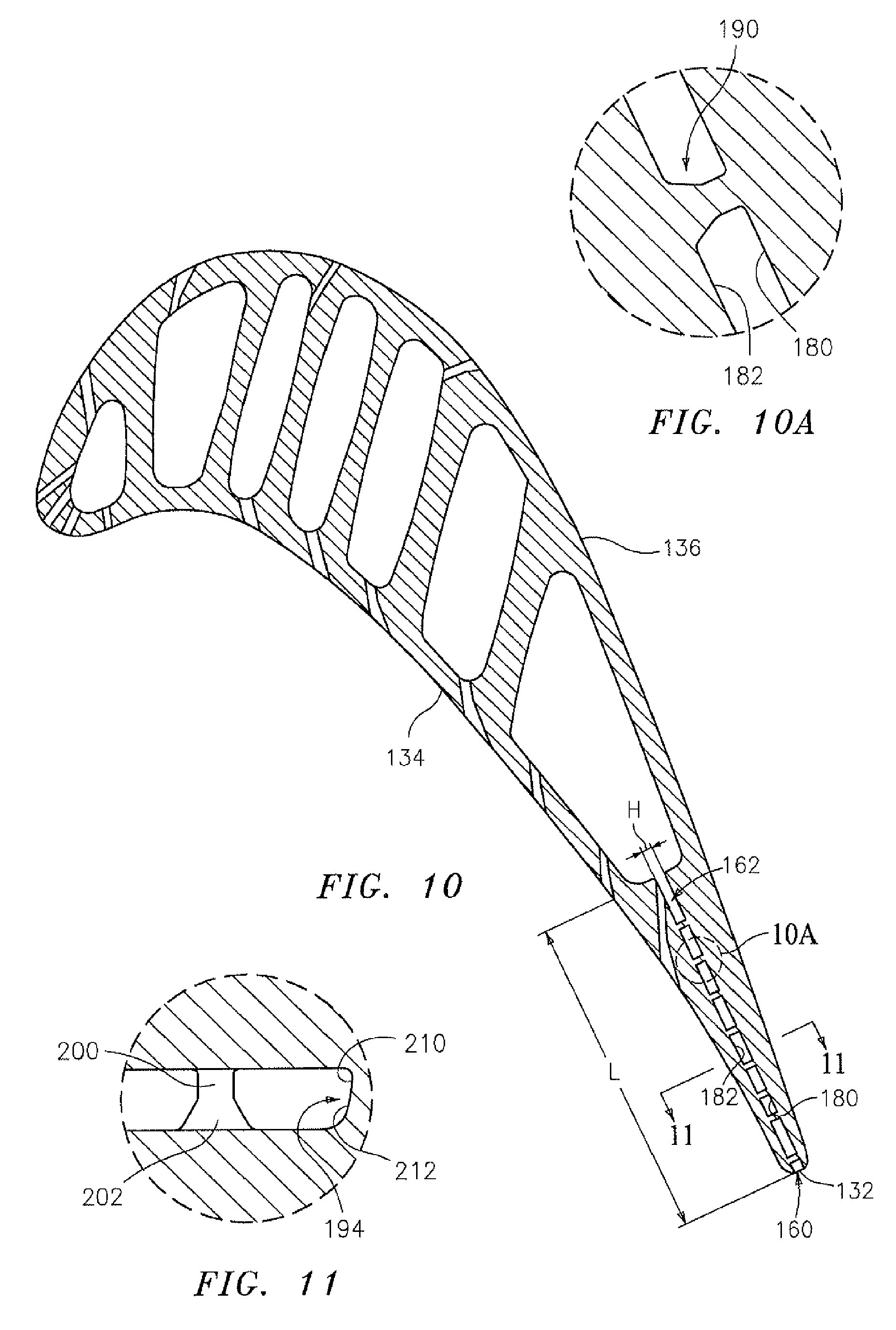 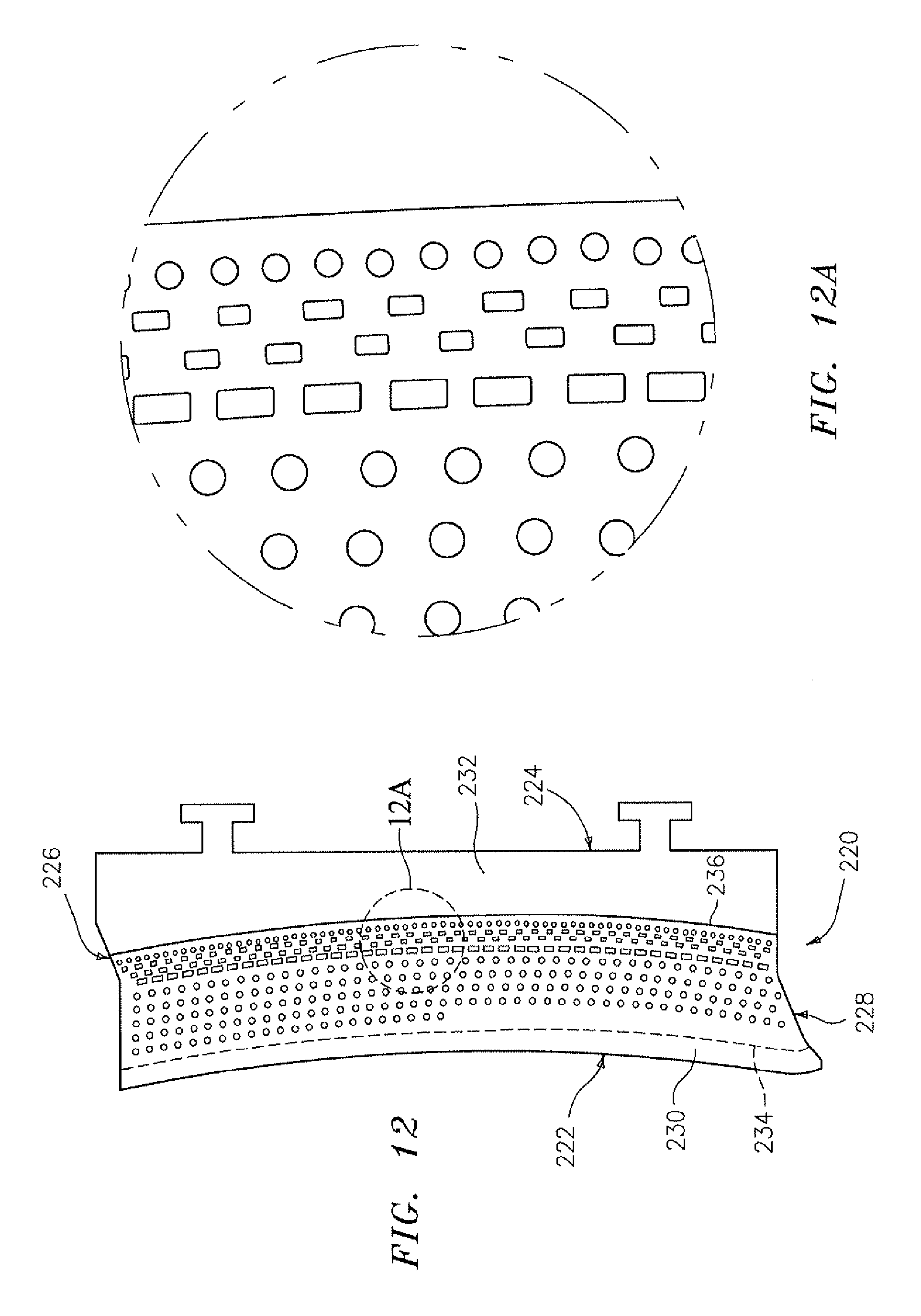 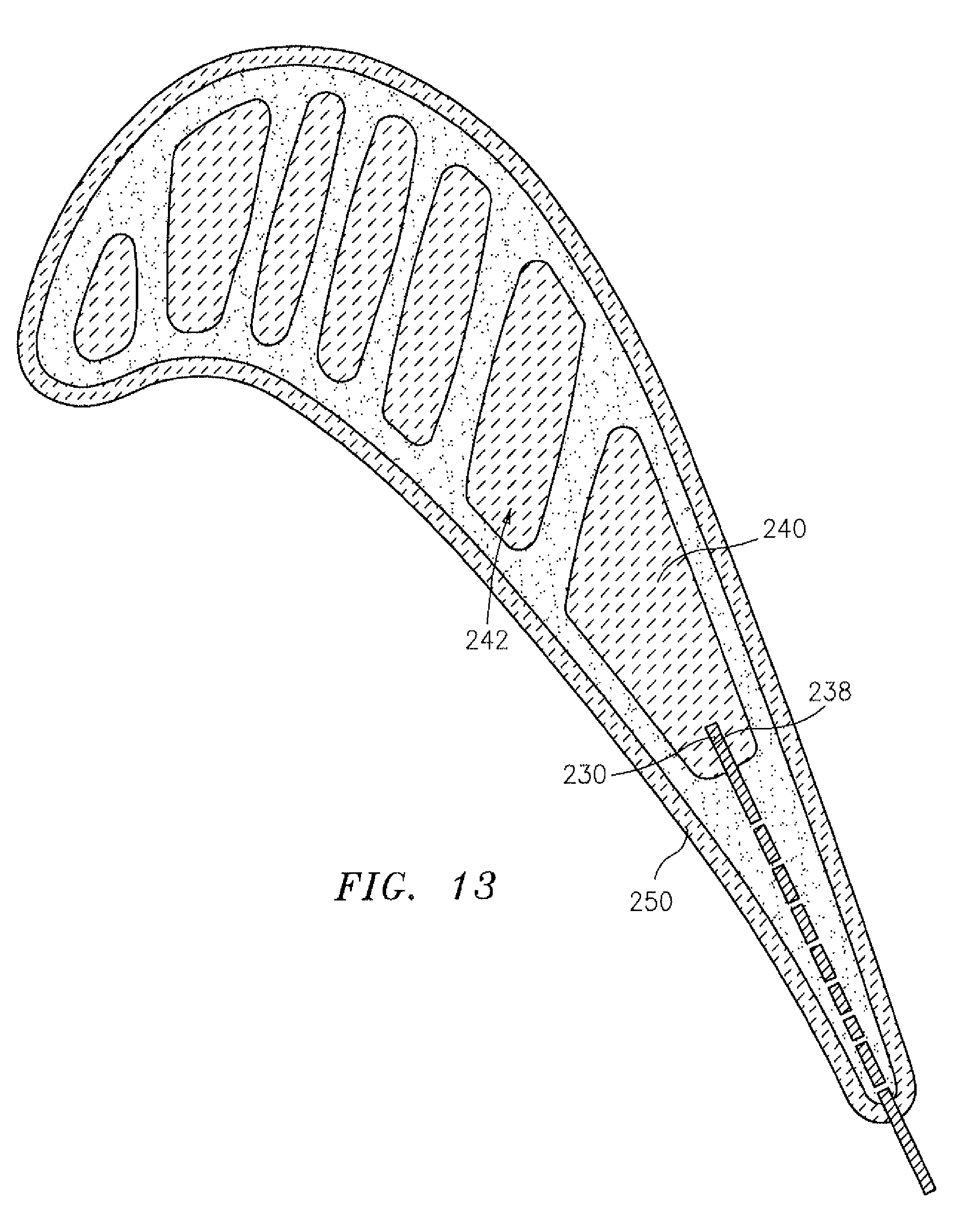 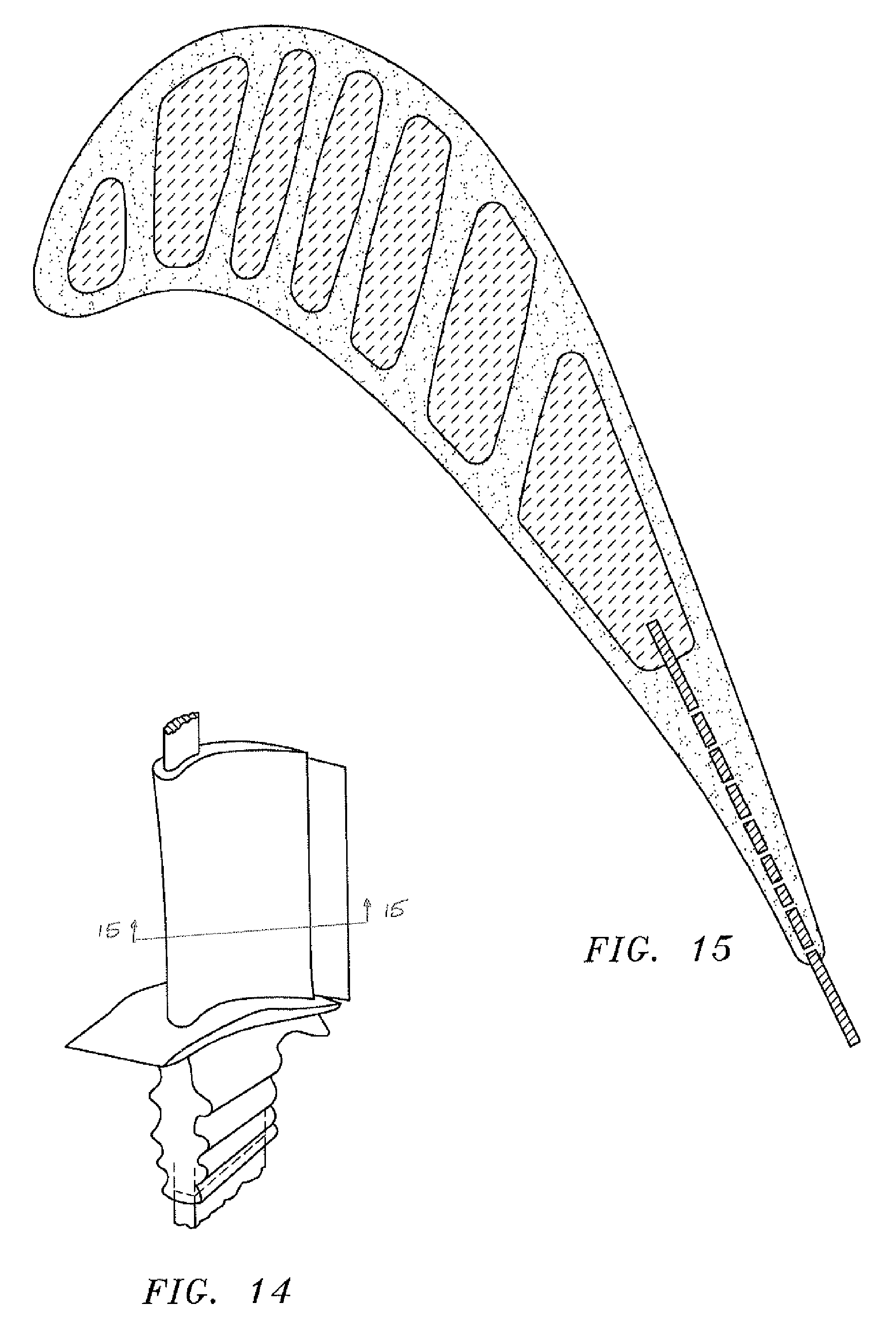 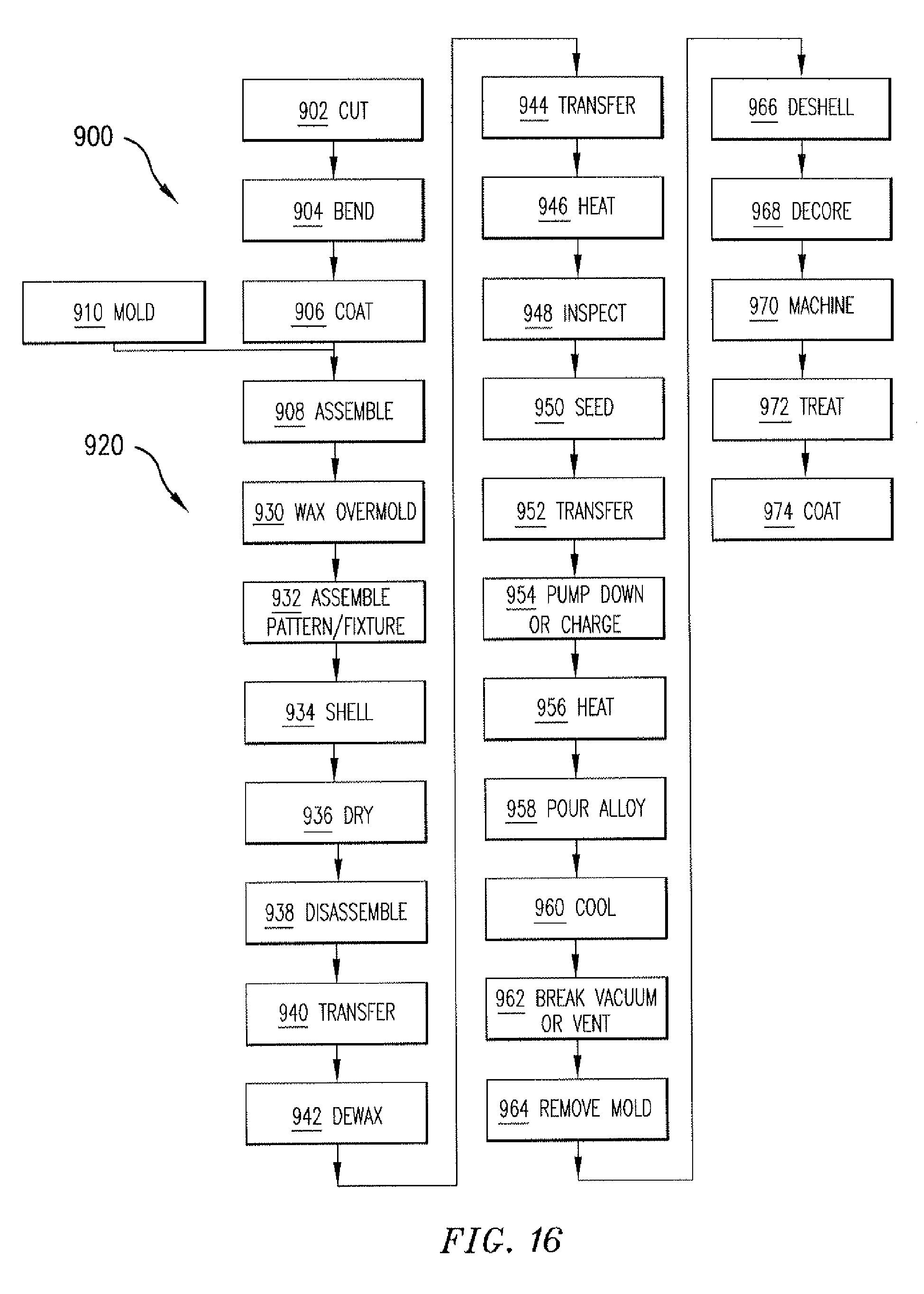 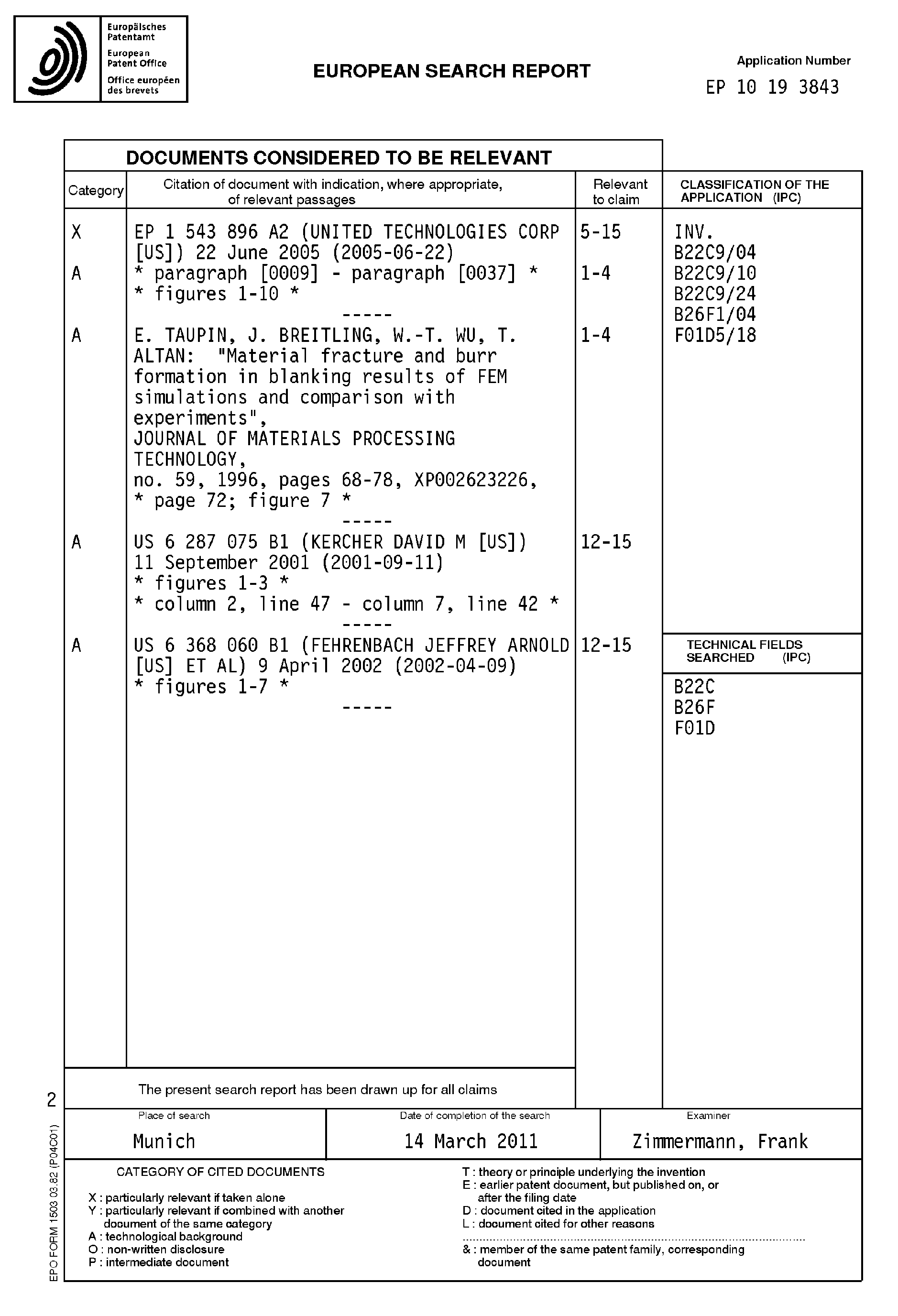 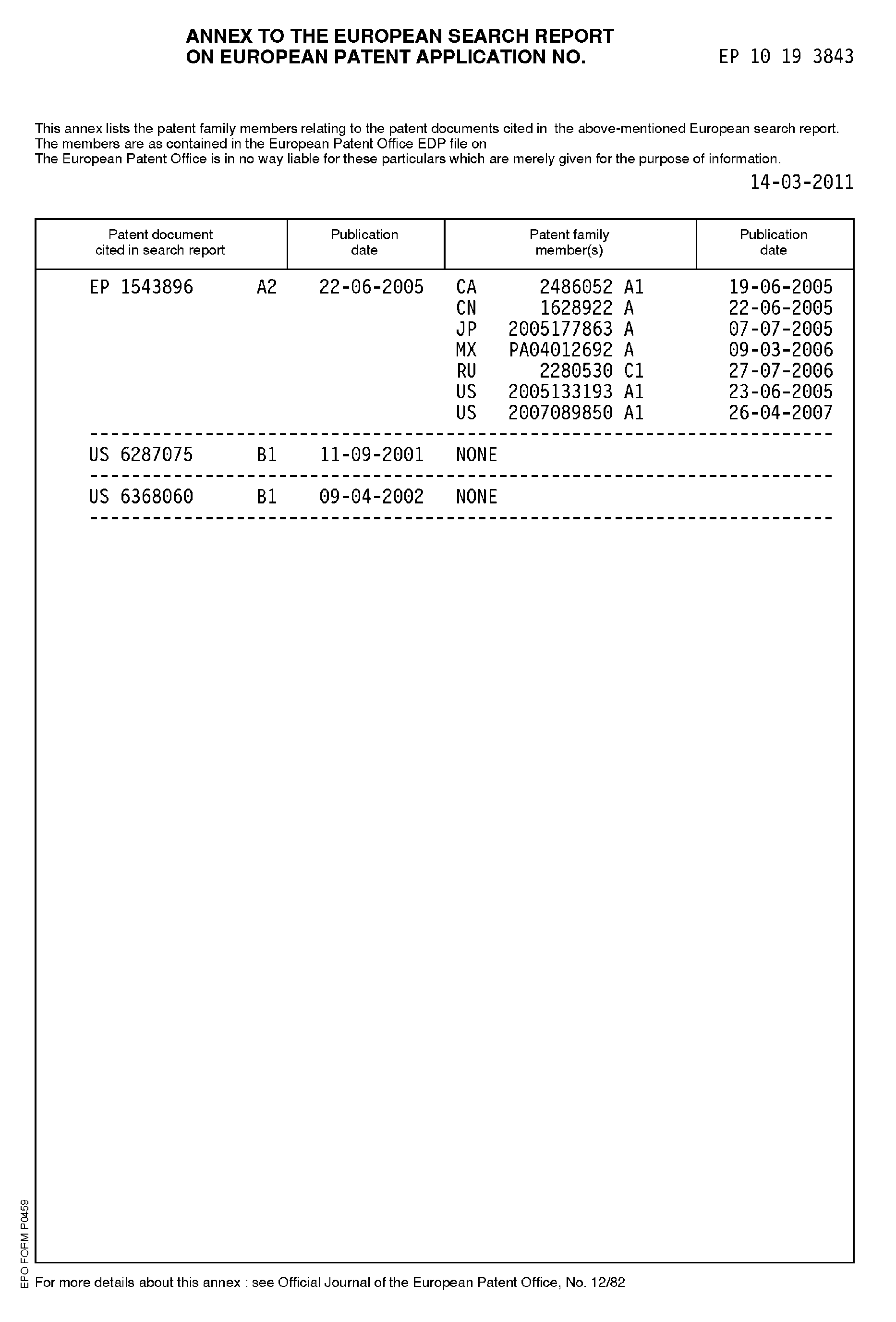