[0002] This invention relates to fluid-powered motors and pumps and more particularly, but not necessarily exclusively, to motors and pumps powered by (or powering) liquids such as water. The motors and pumps may be especially useful in connection with filtration systems for pools and spas, although they may be used in other ways as well.

[0003] U.S. Patent No. 4,449,265 to Hoy illustrates an example of a wheeled automatic swimming pool cleaner. Powering the wheels is an impeller comprising an impeller member and pairs of vanes. Evacuating the impeller causes water within a swimming pool to interact with the vanes, rotating the impeller member. The impeller is reversible, with the impeller member apparently moving laterally when the pool cleaner reaches an edge of a pool to effect the rotation reversal.
[0004] U.S. Patent No. 6,292,970 to Rief, et al., describes a turbine-driven automatic pool cleaner. The cleaner includes a turbine housing defining a water-flow chamber in which a rotor is positioned. Also included are a series of vanes pivotally connected to the rotor. Water interacting with the vanes rotates the rotor in one direction (clockwise as illustrated in the Rief patent), with the vanes pivoting when encountering "debris of substantial size" to allow the debris to pass through the housing for collection. The contents of the Hoy and Rief patents are incorporated herein in their entireties by this reference.
[0005] U.S Patent No. 5,156,541 illustrates a revolving vane pump-motor-meter with a troidal working chamber and paddles rotating about two orthogonal axes.

[0006] The present invention provides efficient alternatives to conventional impellers and turbines. The invention also may be activated as a pump and, if desired, may switch between motor and pump functions dynamically. It has especial usefulness as a motor powering an automatic swimming pool cleaner, although the invention may be utilized in connection with other aspects of a filtration system for a pool or spa or as part of any other system in which conversion of energy from, for example, a suction or pressure source to rotational power is necessary or desired.
[0007] Currently-preferred versions of the present invention typically comprise a body having at least one inlet and at least one outlet. Within the body are positioned one or more pairs of paddles whose distal edges are locally flexible to facilitate passage of debris. Rather than being placed in the same plane (or otherwise uniformly formed), however, paddles of a pair in the present invention may be positioned perpendicularly. Stated differently, if the paddles themselves are generally planar and one paddle of a pair exists in a first plane, the other paddle of the pair may exist in a second plane normal to the first plane. In other versions these paddles of a pair need not necessarily be perpendicular to each other, although some angular difference between orientations of paddles of a pair may be beneficial. In yet other versions, paddles need not necessarily be paired, although again having angular differences between orientations of various paddles may be advantageous.
[0008] In at least one version of the invention having paired paddles, a first pair of paddles is connected by a shaft. The paddles additionally are connected, via hinges, bearings, or other connection means, to a base. The base is configured to allow some rotation of the paddles about an axis aligned with at least part of the shaft, with the base and connection means also functioning to limit rotation of the paddles in some, but not all, versions of the invention. Preferably, the paddles may rotate through an angle of ninety degrees about this axis, although other angular rotations may occur instead.
[0009] At least this embodiment further includes a second pair of paddles likewise connected by a shaft and to a base. Each of the two shafts beneficially may be non-linear, allowing the shafts to cross without interfering with paddle rotation yet permitting portions of each shaft to remain in the same plane. Moreover, the two bases may be configured to fit together, forming a unitary structure housing at least parts of both shafts. Either or both bases may include an outwardly-extending shaft that provides (1) rotational output when the invention is used as a motor and (2) rotational input when the invention is used as a pump.
[0010] Bodies consistent with the invention may be hollow (or have hollow portions) into which the paddles and bases are fitted. The unitary structure including the paddles and bases may rotate about the outwardly-extending shaft (or shafts) a full three hundred sixty degrees (i.e. in paddle-wheel fashion) either clockwise or counterclockwise as desired. Consequently, paddles of the present invention may rotate about two different axes in operation, although they preferably do not move linearly--unlike the impeller member of the Hoy patent.
[0011] The bodies also may be configured to present flow restrictions. Such a restriction may, when contacted by a paddle, cause the paddle to rotate so that its faces are parallel (or generally parallel) to the fluid direction through the body. This rotation in turn causes the paired paddle to rotate so that its faces are perpendicular to the flow direction. The result is one paddle of a pair presenting minimum surface area to the flow direction while the other provides maximum surface are to the flow direction, allowing the suction or pressure force to work with greatest efficiency in rotating the unitary structure to supply high-torque output.
[0012] Stated differently, the present invention uses predominantly surface-area differentials to cause rotary motion. The fluid-flow pressure encountered by both paddles of a pair is the same (or approximately so); one paddle merely presents a larger surface area to the fluid flow than does the other paddle. This concept differs significantly from that of standard impellers, which jet fluid at one side of an impeller to cause a pressure differential on sides of the blades, thus creating rotation to relieve the imbalance.
[0013] Moreover, in standard impellers, a blade opposite the one being impacted by the jetted fluid is moving fluid in a direction opposite the flow. In this sense, it is "dragging dead fluid" along, reducing the overall efficiency of the device. By contrast, no material level of such "dragging" occurs in connection with the present invention.
[0014] It thus is an optional, non-exclusive object of the present invention to provide fluid-powered devices that may be employed as motors or pumps (or both).
[0015] It is another optional, non-exclusive object of the present invention to provide fluid-powered devices using, predominantly or exclusively, surface-area differentials to cause rotary motion.
[0016] It is a further optional, non-exclusive object of the present invention to provide fluid-powered devices utilizing at least one pair of paddles, with each paddle of a pair being non-planar, or otherwise non-uniformly oriented, with the other paddle of the pair.
[0017] It is, moreover, an optional, non-exclusive object of the present invention to provide paddles configured to rotate about multiple axes.
[0018] It is also an optional, non-exclusive object of the present invention to provide fluid-powered devices having a pair of paddles connected via a non-linear shaft.
[0019] It is an additional optional, non-exclusive object of the present invention to provide fluid-powered devices especially useful in connection with automatic swimming pool cleaners or other equipment used as part of filtration systems of pools, spas, or hot tubs.
[0020] Other objects, features, and advantages of the present invention will be apparent to those skilled in appropriate fields with reference to the remaining text and the drawings of this application.

FIG. 1 is a first exterior plan view of an exemplary device consistent with the present invention.

FIG. 2 is a second exterior plan view of the device of FIG. 1.

FIG. 3 is a first perspective view of portions of the device of FIG. 1, including two pairs of paddles and a flow restrictor depicted within a body.

FIG. 4 is a second perspective view of portions of the device of FIG. 1, including the pairs of paddles of FIG. 3.

FIG. 5 is a perspective view of the pairs of paddles of FIG. 3.

a. a body (14) having an inlet (18) and an outlet (22) and a water flow region between the inlet and the outlet configured so that water flows in a direction from the inlet to the outlet;

b. first paddle (38A) positioned at least partly within the body (14) and configured for rotation about first (X) and second (Z) axes; and

characterised in that each of the first paddle (38A) and the second paddle (38B) has a flexible edge.

7. A device (10) according to claim 6 further comprising (i) a body (14) and (ii) a restriction (42) positioned at least partly within the body (14) and configured to contact at least the first paddle (38A) and cause it to rotate about the first axis (X).

8. A device (10) according to claim 5 in which the first shaft (50A) comprises a central portion (54A) translated from the first axis (X) to form a nesting space (58A) and the second shaft (50B) comprises a central portion (54B) translated from the generally longitudinal axis (Y) to form a nesting space (58B).

12. An automatic swimming pool cleaner comprising the device (10) of claim 1. 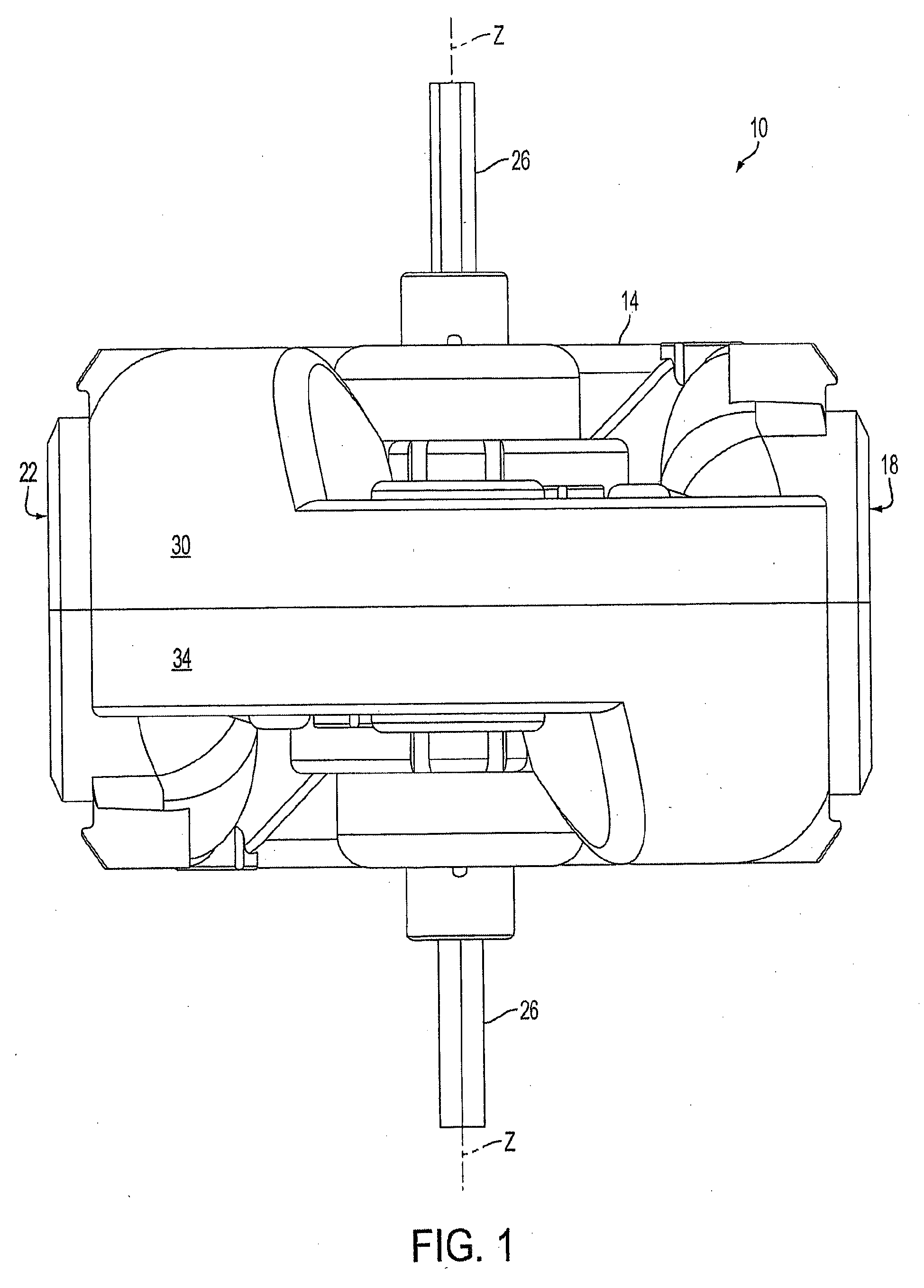 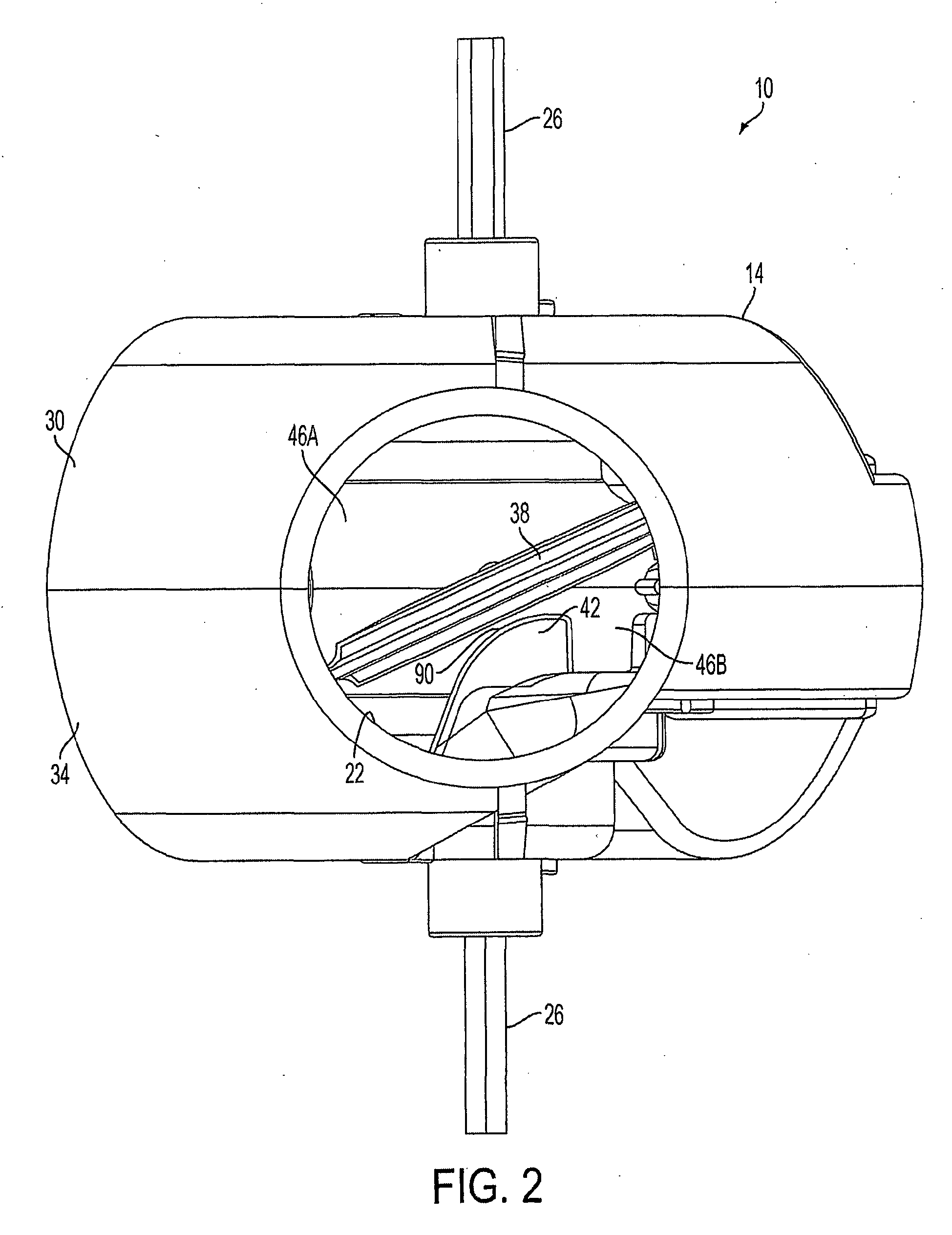 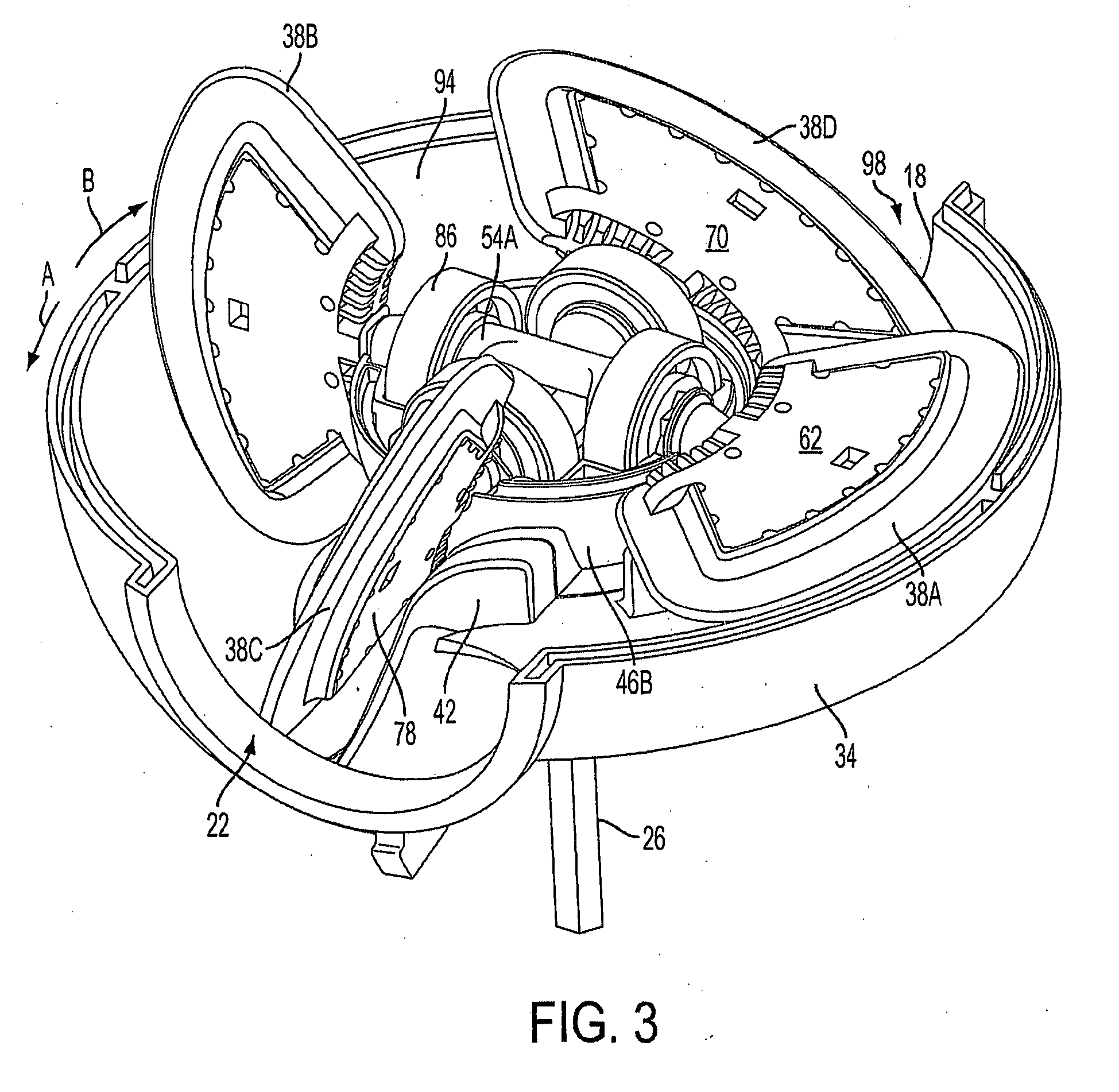 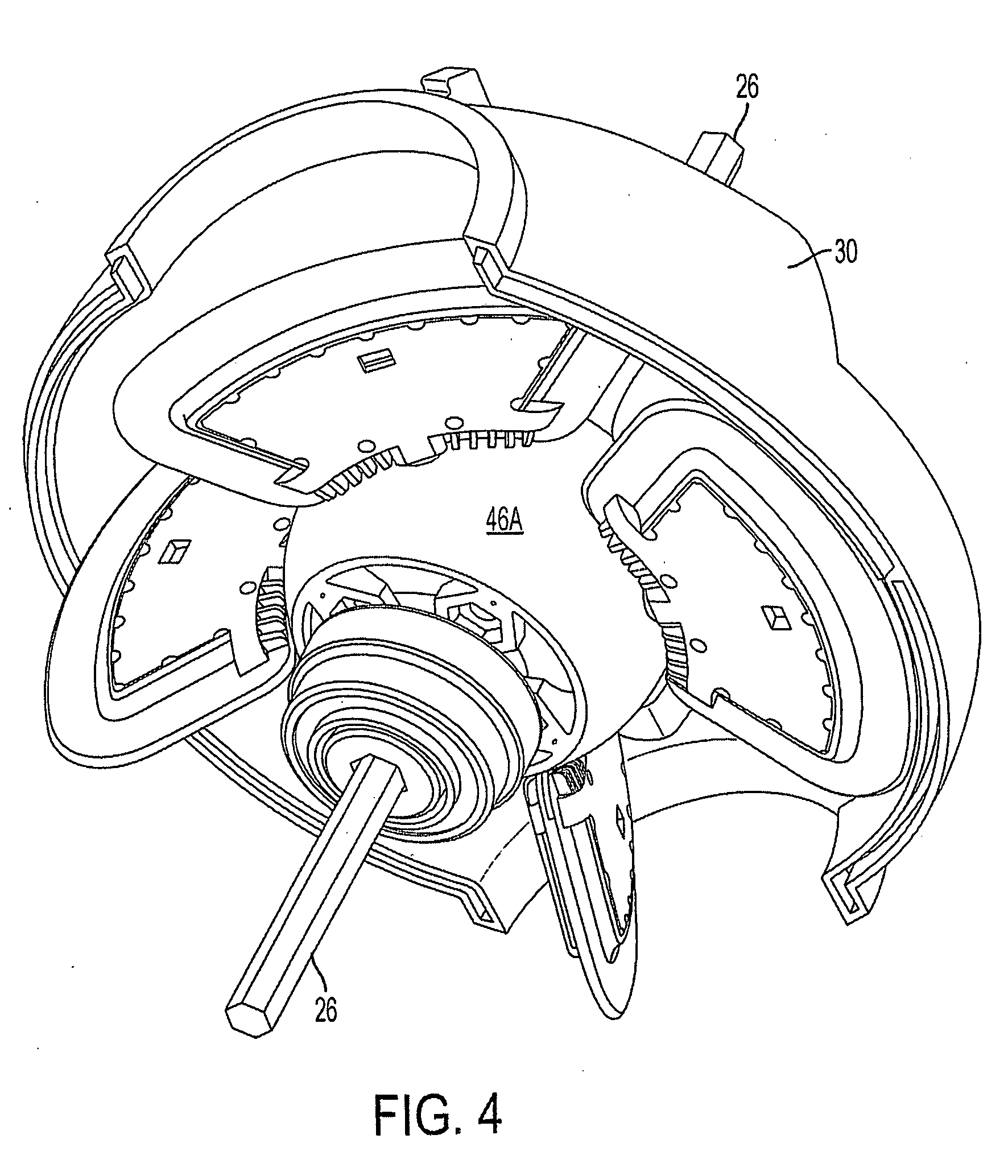 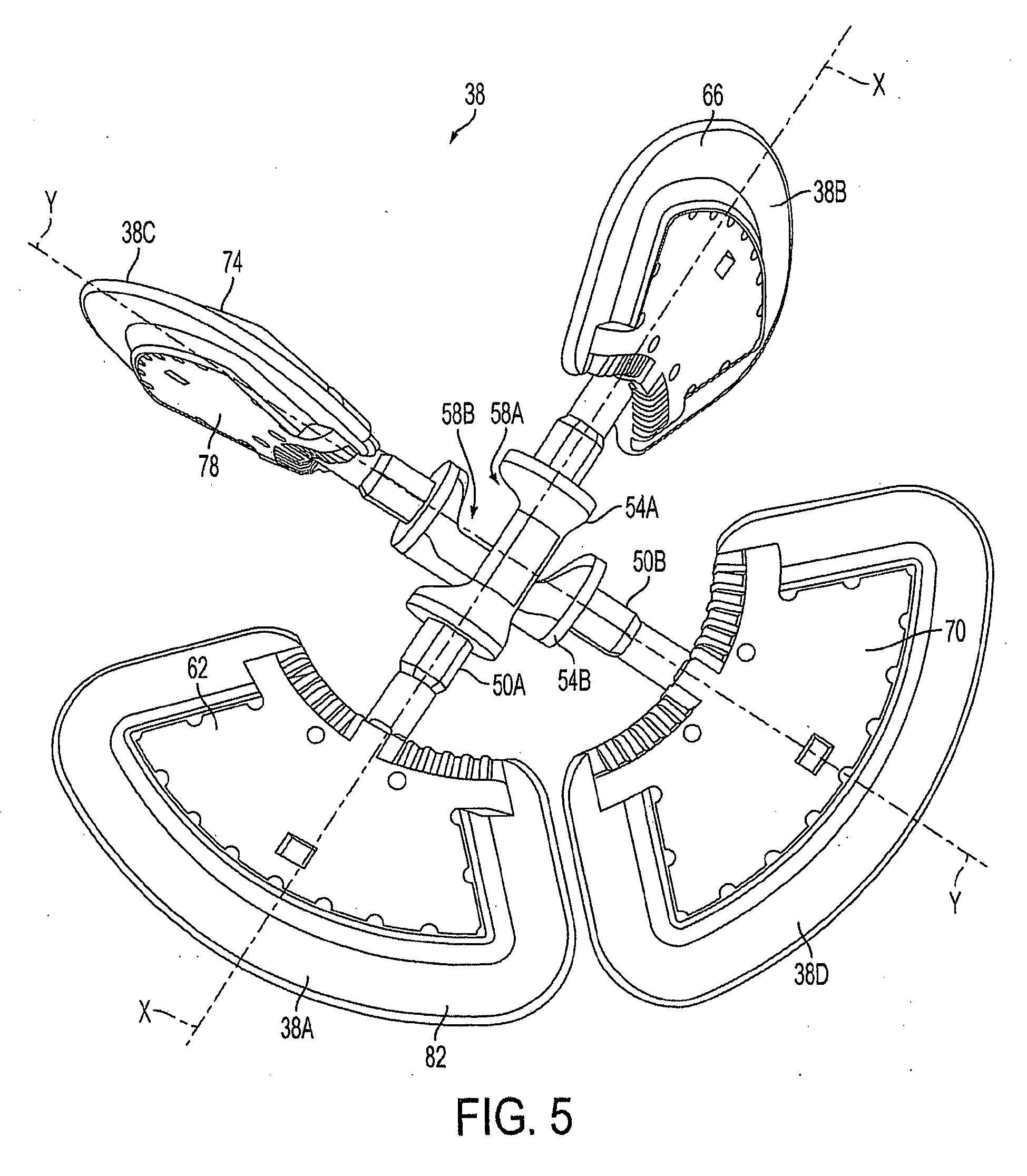