Fig. 1 shows a first embodiment of a mould for producing a construction element according to the invention.

Fig. 2 shows a second embodiment of a mould for producing a construction element according to the invention.

Fig. 3 shows a simplified scheme of a production facility according to the invention for transporting moulds in a loop.

Fig. 4 shows a schematic perspective ghost view of a construction element according to the invention.

1. A method for producing a wood wool construction element, comprising the steps of:

b) providing a mixture of wood wool and a hydraulic binder;

c) dispersing at least a part of said mixture in the mould (1) so as to provide a layer (6) of the mixture, said layer (6) having a height that is less than the height of the side walls (3, 4);

11. A method according to claim 9 or 10, wherein said inlay (7, 8) is comprised of at least one of a damp proof course, a reinforcing layer, an isolating layer, a girder (8), a pillar (7) and a hoisting means (9, 10), for example a wood strand cement board, an asphalt paper, a foamed polymer, a wooden pole (9); each optionally provided with a layer having cement binding properties.
12. A method according to claim 10 or 11, wherein said hoisting means (9, 10) comprises an elongate element (9) substantially parallel to and at a distance from a side wall (4) and a lifting strap (10) con-nected with said elongate element (9) and extending towards and out of the mould (1) along said side wall (4).
13. A method according to claim 10, wherein said pillar (7) extends between two opposed side walls (3; 4), or between a side wall (3) and a beam (8) positioned against an opposite side wall (4).
14. A method according to claim 10, wherein at least one side wall (4) is hingedly connected to the bottom (2), and said hingedly connected side wall (4) is hinged out after step f) for allowing the construction element to be removed from the mould (1).
15. A production facility for performing the method according to any of claims 1 - 14 comprising at least one mould (1) with a bottom (2) and at least two side walls (3, 4), a means for providing a mixture of wood wool and cement, a means (13) for dispersing said mixture of wood wool and cement into said mould (1), whereby the production facility furthermore comprises: - a transporting means (15) for repeatedly transporting said moulds (1) to and from said dispersion means (13), for at least twice dispersing mixture of wood wool and cement into said mould (1); and - a hardening means for hardening said mixture at least partially in between two dispersion steps; a means for positioning a cover on top of the mould (1) so as to compress the mixture in the mould (1); and a means for hardening the mixture.
16. A production facility according to claim 15, comprising a series of moulds (1) and transporting means (15) for successively transporting said moulds (1) in a loop (15) along said dispersion means (13) for continuously dispersing said mixture in said successively transported moulds (1).
17. A production facility according to claim 15 or 16, furthermore comprising a station (16) for positioning an inlay (7, 8, 9, 10) in said moulds (1). 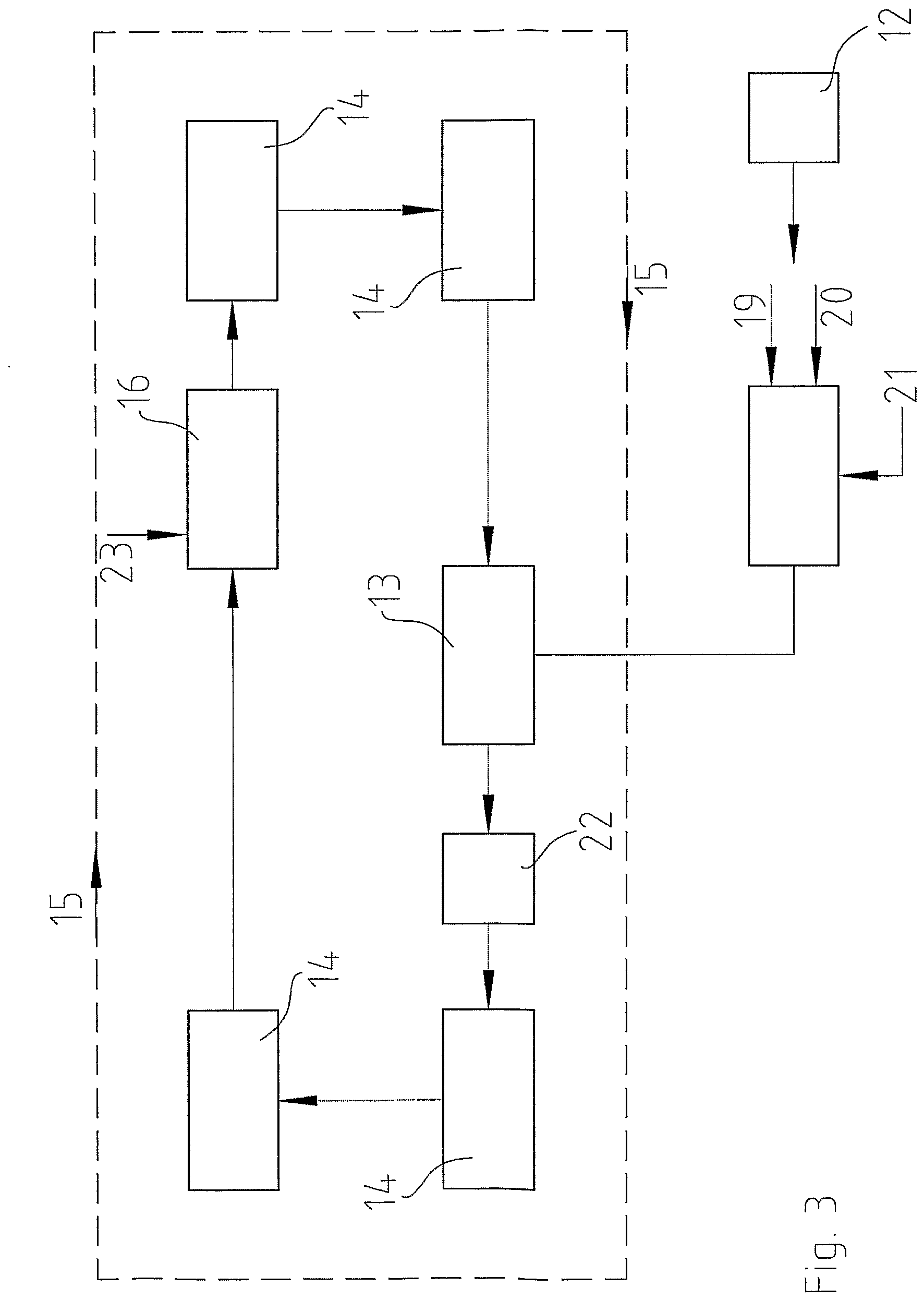 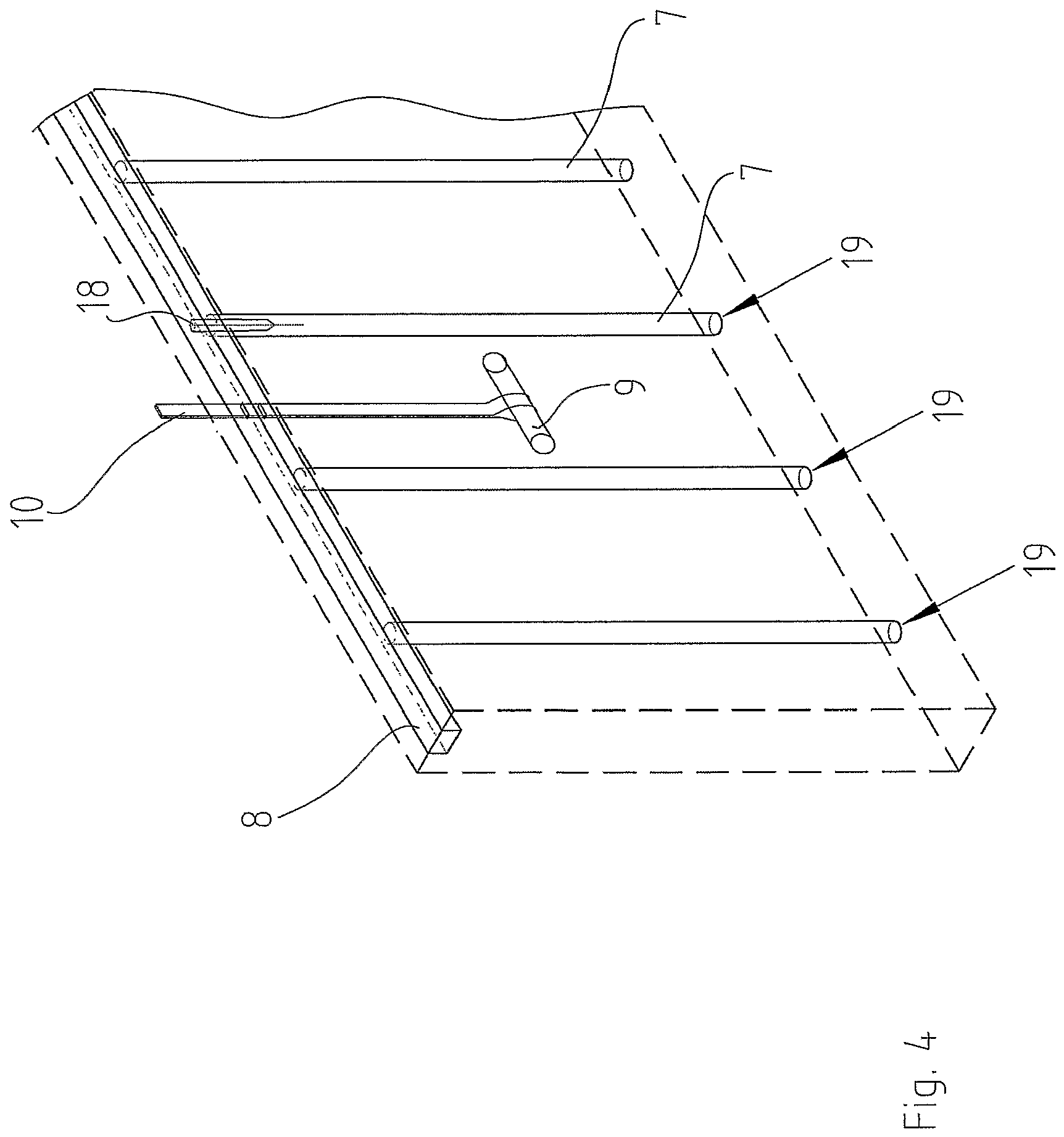