[0001] Semiconductor chip or die automated assembly equipments typically rely on the use of vacuum operated placement heads often referred to as vacuum grippers or pick-and-place tools. In their simplest embodiment, these placement heads typically consist of an open ended cylinder having a drilled nozzle surface which seals to the die to accomplish physical attachment. Semiconductor chips or die which are ultra thin, fragile, or too small cannot be economically handled by conventional vacuum grippers. As a result, alternative approaches such as self-assembly or dry transfer printing technologies are being investigated.
[0002] Transfer printing enables the massively parallel assembly of high performance semiconductor devices onto virtually any substrate material, including glass, plastics, metals or other semiconductors (see, e.g., U.S. Pat. No. US7622367 B1 METHODS AND DEVICES FOR FABRICATING AND ASSEMBLING PRINTABLE SEMICONDUCTOR ELEMENTS filed June 2, 2005). This semiconductor transfer printing technology relies on the use of a microstructured elastomeric stamp to selectively pick-up devices from a source wafer and then prints these devices onto a target substrate. The transfer process is massively parallel as the stamps are designed to transfer hundreds to thousands of discrete structures in a single pick-up and print operation.
[0003] While pick-and-place tools rely on suction forces, dry transfer printing tools rely on surface adhesion forces to control the pickup and release of the semiconductor devices. To enable dry transfer printing, methods to control the adhesion forces between the semiconductor elements and the elastomeric stamp are required. One such method is described in U.S. Pat. App. US2009199960A1 filed June 9, 2006 titled "PATTERN TRANSFER PRINTING BY KINETIC CONTROL OF ADHESION TO AN ELASTOMERIC STAMP." In that method, the elastomeric stamp adhesion forces are controlled by adjusting the delamination rate of the elastomeric transfer stamp. This control of separation or delamination rate provides a means of increasing the stamp adhesion forces that are necessary to pickup semiconductor elements from a source wafer. There are problems, however, associated with transferring the semiconductor elements from the stamp to a receiving substrate with this technique. First, slow stamp delamination rates (< 1 mm/s) are often required to transfer semiconductor elements onto bare target substrates or substrates coated with a low tack surface adhesive. This increases processing time and impacts the ability to achieve high-throughput transfer printing. Second, stamps optimized for dry transfer printing semiconductor elements with high placement accuracy typically use a stiff backing layer. During the printing or transfer step, the delamination rate of those stamps can be unstable and difficult to control when the stiff backing layer(s) are subject to bending forces. Third, printing yields on surfaces that are not ultra smooth, or low tack surfaces, can be very low. US2003/0047535A1 describes an automated process for microcontact printing, comprising the steps of providing a substrate and a stamp; automatically aligning the substrate and stamp so that the stamp is aligned relative to the substrate to impart a pattern to the substrate at a desired location and with a desired orientation on the substrate; applying an ink to the stamp, the ink including a molecular species adapted to form a self-assembling monolayer (SAM) on the substrate; contacting the stamp and the substrate; and separating the stamp from the substrate.
[0004] Accordingly, there is a need for an improved method for transfer printing semiconductor elements with high yield and placement accuracy, the method, system and process being scalable to large-size elastomeric stamps.

FIG. 1 is a process flow diagram with cross-section schematic views illustrating the steps to practice one embodiment of shear offset printing. A Align transfer printing stamp; B Laminate transfer printing stamp by applying air pressure on stamp backing; C Apply in plane shear on stamp posts by moving tool head by a given X and/or Y position offset; D Delaminate stamp by moving tool head up in the Z direction and simultaneously decreasing air pressure applied on stamp backing.

FIG. 2A is one example of a three dimensional schematic of a composite stamp that may be used for shear offset printing.

FIG. 2B provides an illustration of a schematic cross-sections of various stamp posts that may be used with shear offset printing.

FIG. 3 provides one example of a layout for relief feature on a transfer surface of an elastomeric stamp, including anti-sag and stabilization features.

FIG. 5 is a graphical representation of silicon chiplets transfer printing yield as function of the shear offset applied on a reinforced composite stamp mounting flange as indicated by the arrows in FIG. 4A. The inset is a high resolution optical image of a 3x2 sub-array of transfer printed silicon chiplets.

FIG. 6A is a schematic illustration of a composite stamp model used to perform finite element simulations of a stamp post undergoing delamination from a substrate under applied forces.

FIG. 6B is the finite element simulation results of the stamp post delaminating from a substrate illustrated in FIG. 5A. The vertical displacement of the stamp internal mesh elements are represented using a contour plot.

FIG. 7A is a plot of the in silico results of the energy normalized to the maximum calculated energy necessary to delaminate a composite stamp post as a function of the shear offset applied on the stamp glass backing layer.

FIG. 7B is a plot of the in silico results of the delamination rate of a composite stamp post as a function of the shear offset applied on the stamp glass backing layer.

FIG. 8A provides a schematic illustration of a composite stamp model used to perform finite element simulations of a flat (non-structured printing surface) stamp delaminating from a substrate.

FIG. 8B provides finite element simulation results of the composite stamp of FIG. 7A delaminating from a substrate. The vertical displacement of the stamp internal mesh elements is indicated. To improve the figure clarity, the stamp deformed shape is magnified by a factor of 100.

FIG. 9A provides finite element simulation results of a composite stamp laminated edge length as a function of the air pressure applied on the composite stamp glass backing.

FIG. 98 provides finite element simulation results of a composite stamp laminated edge-length as a function of the vertical displacement of the stamp outer edges.

FIG. 10A provides model predictions of a pressure profile over time to achieve a constant delamination rate of 65 mm per normalized time unit of a composite stamp.

FIG. 108 provides model predictions of a vertical motion time course (e.g., rate of vertical separation between stamp edge and substrate) to achieve a constant delamination rate of a composite stamp.

b. providing a substrate having a receiving surface;

a. an elastomeric layer having a top surface that is opposite said transfer surface;

b. positioning said semiconductor elements to within less than or equal to 100 µm vertical separation distance from said receiving surface; and

11. The method of claim 1 further comprising:

a. applying an air pressure to at least partially establish said conformal contact; and 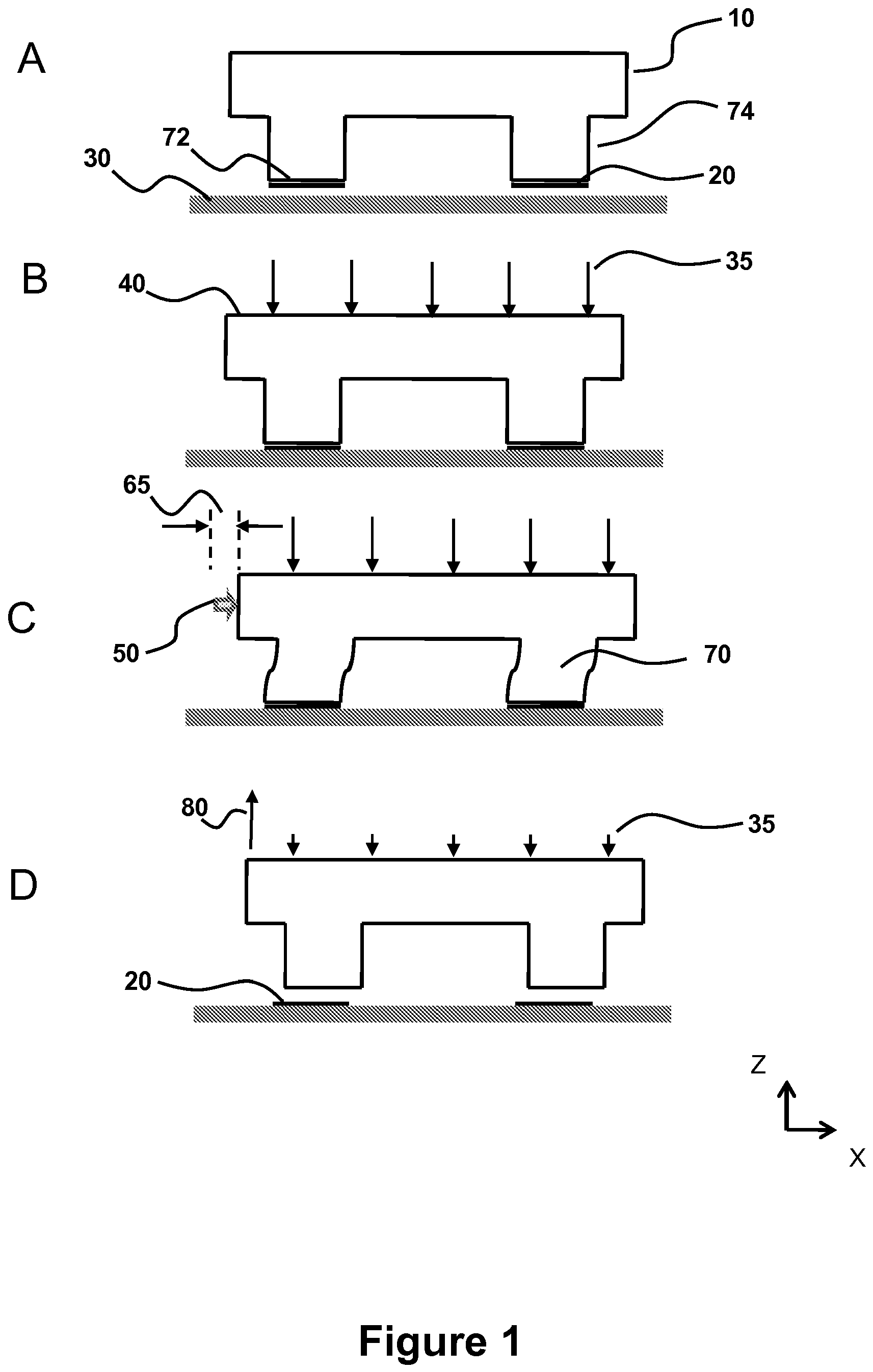 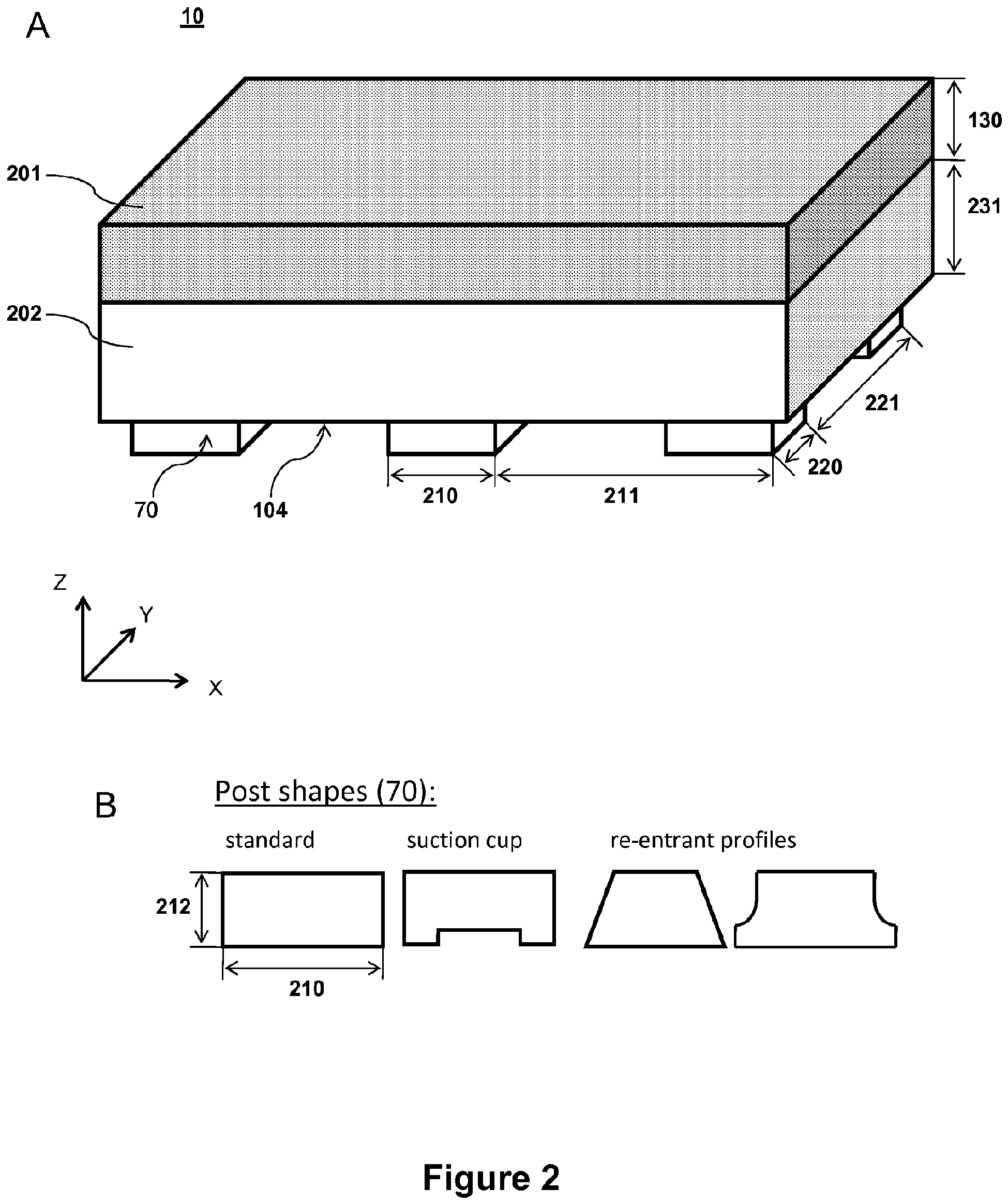 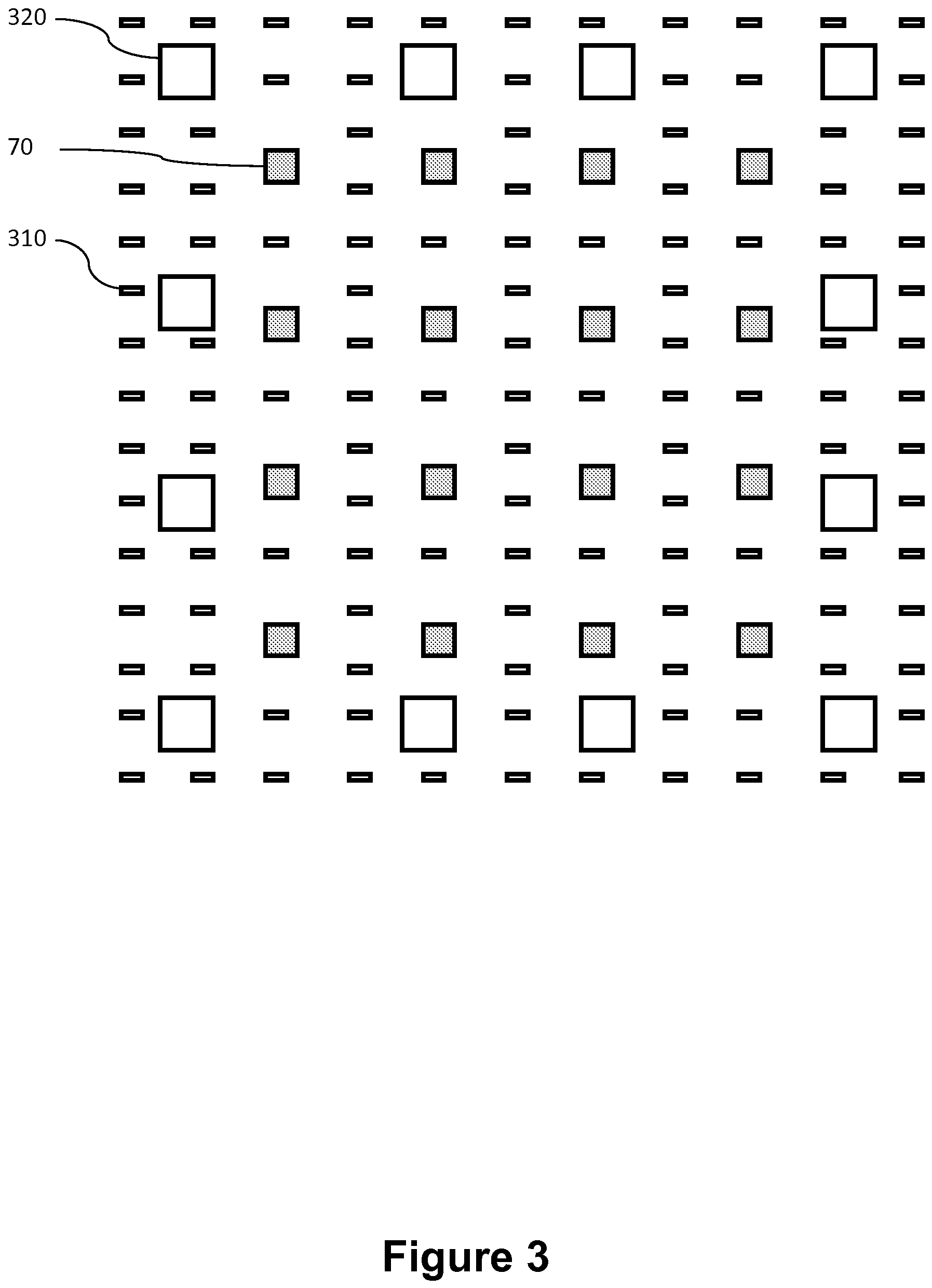 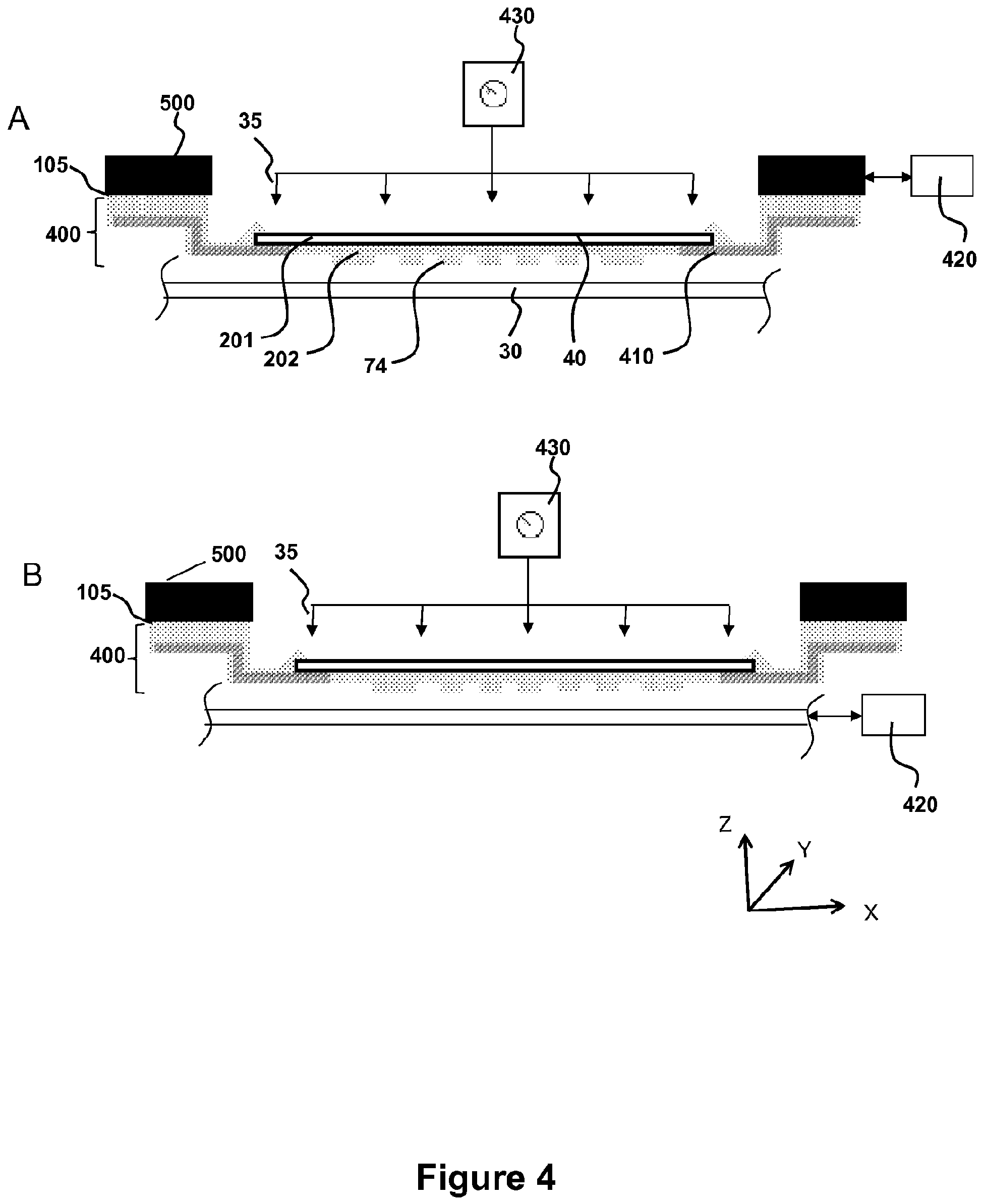 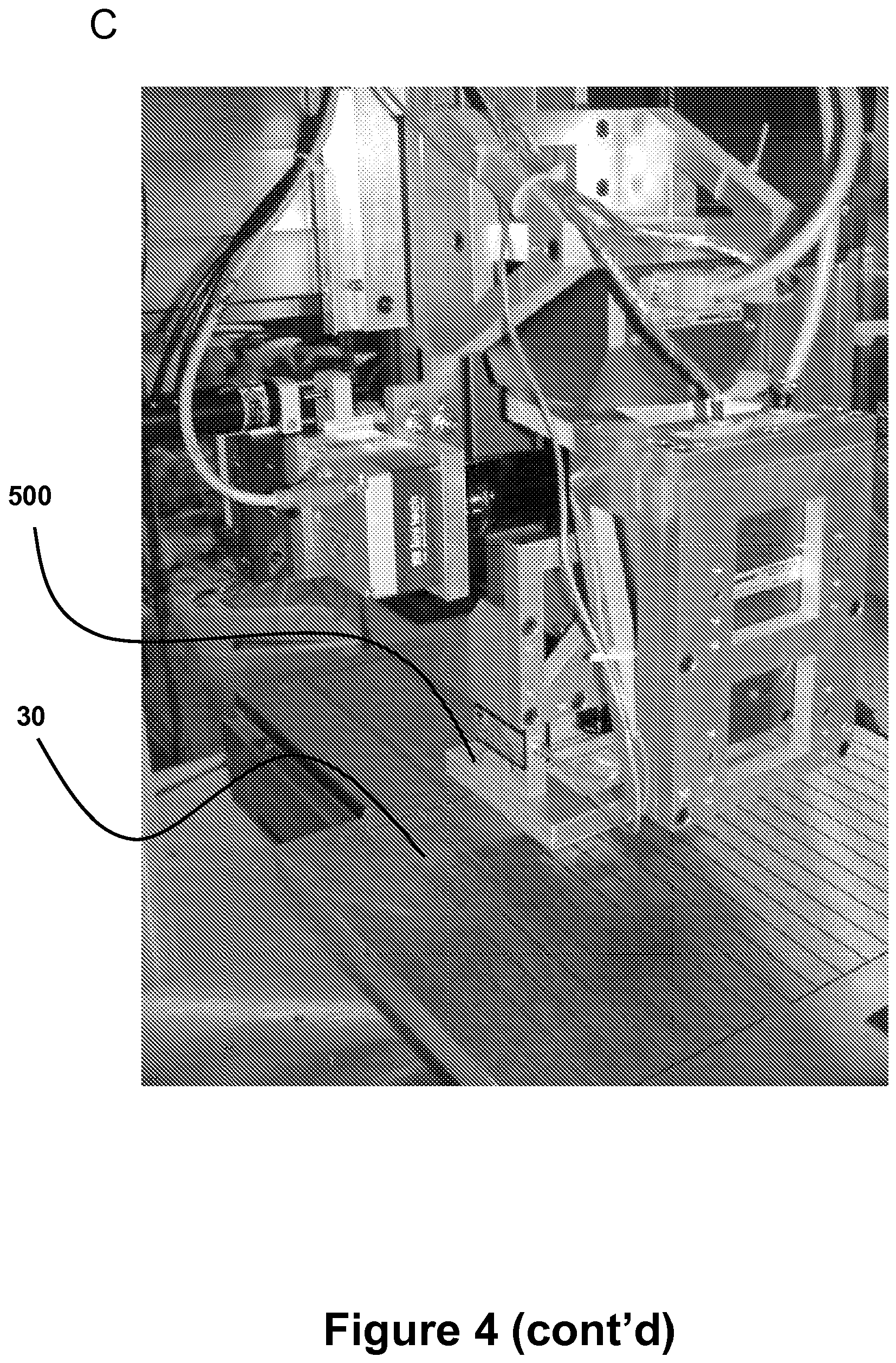 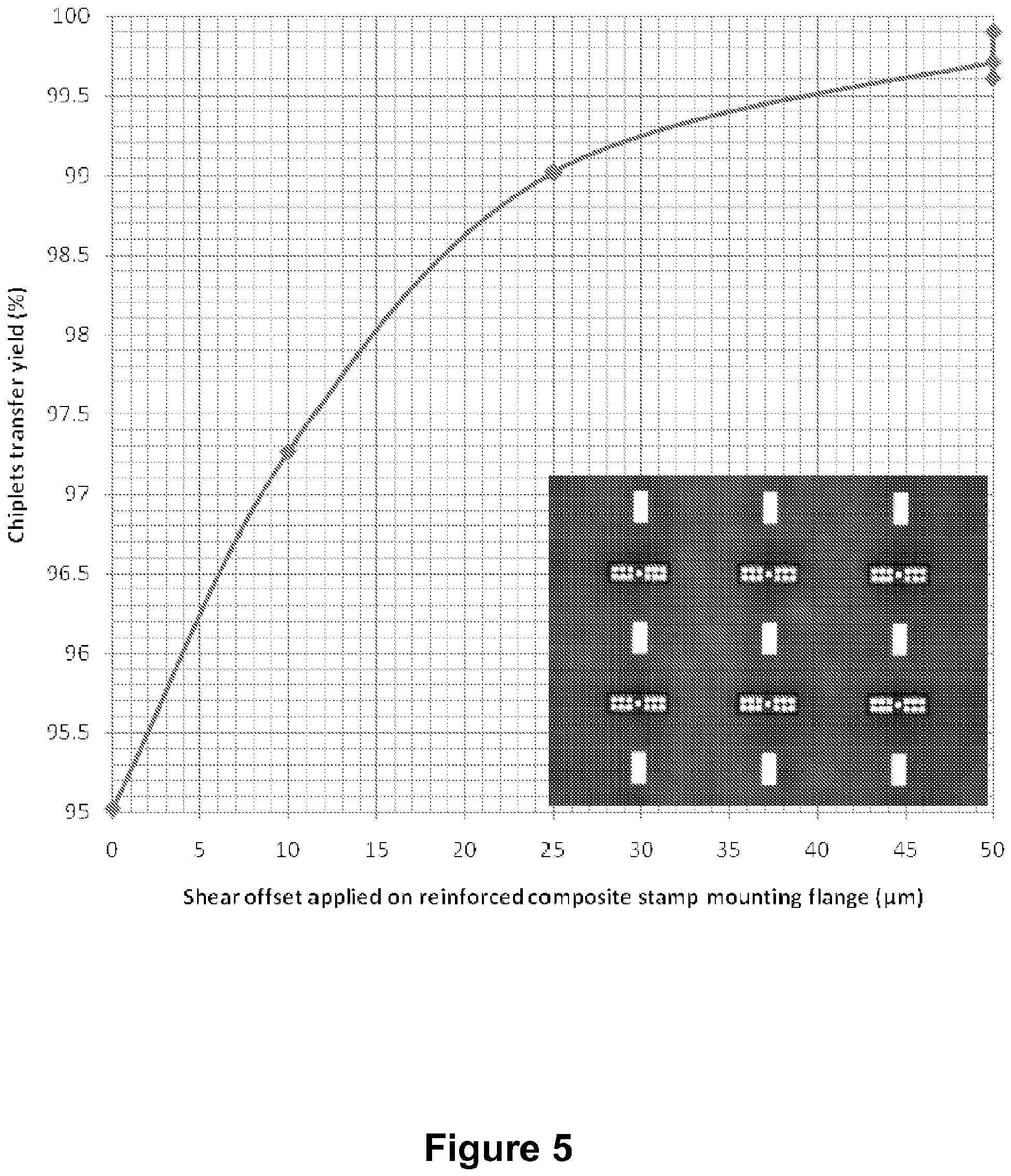 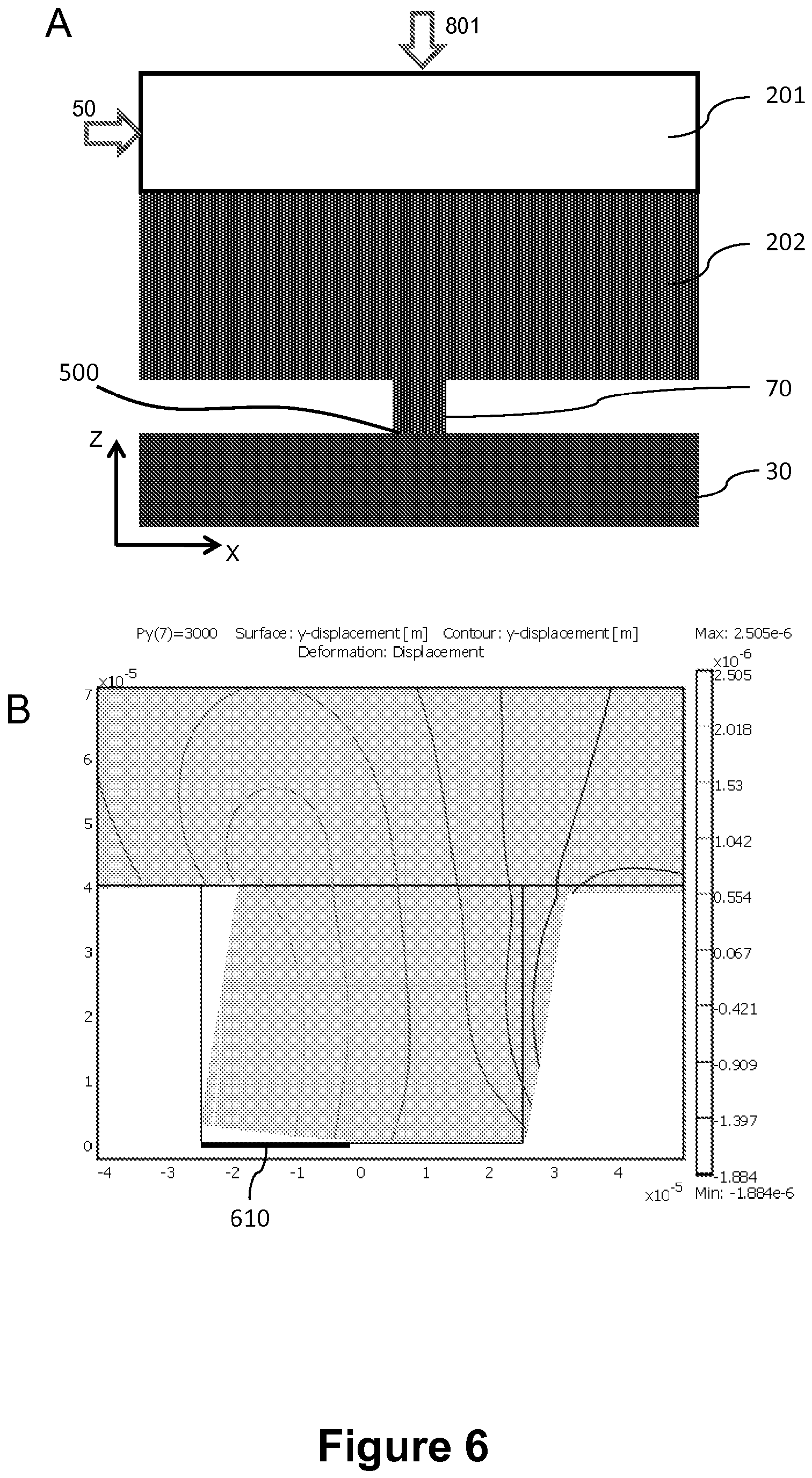 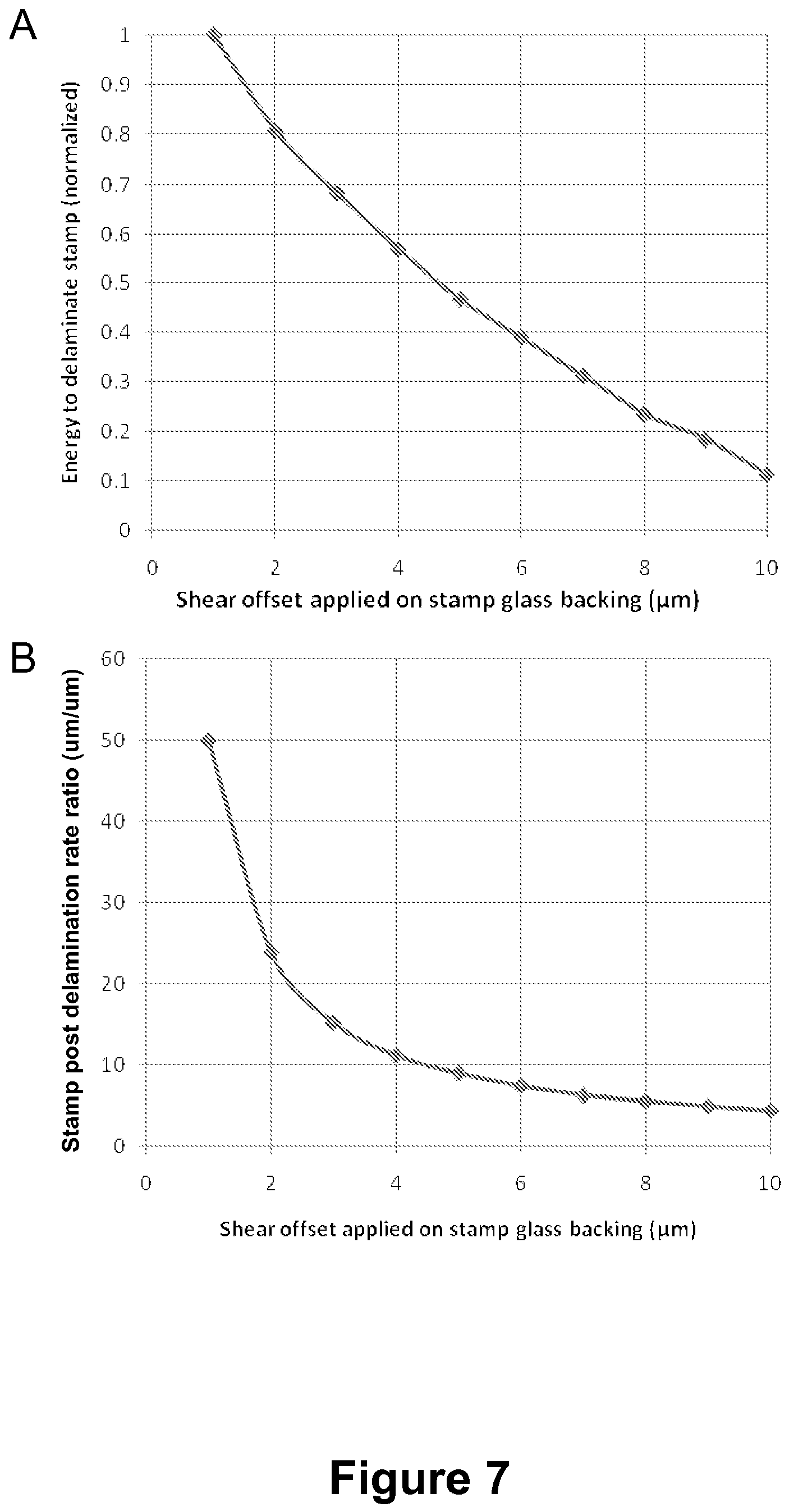 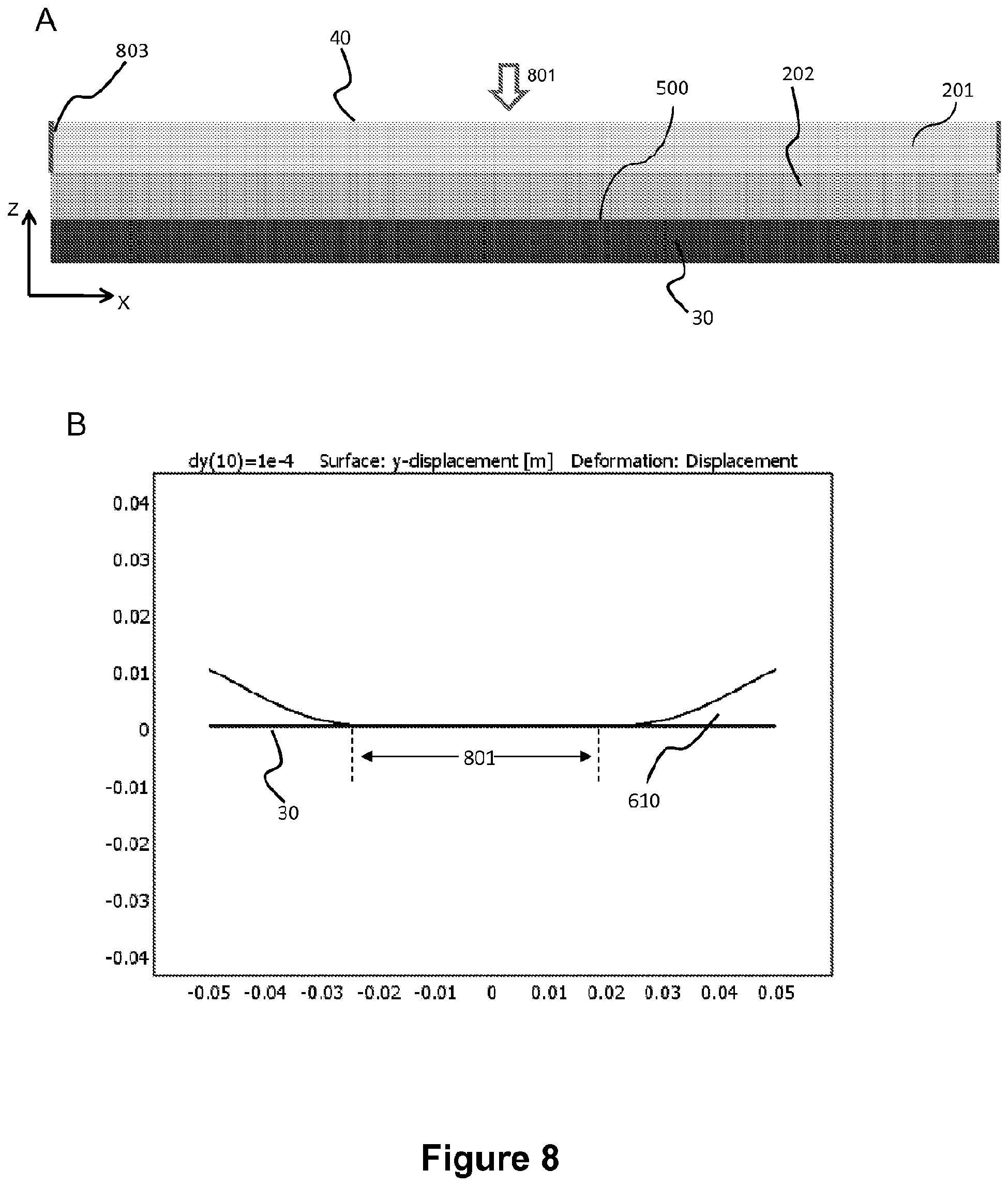 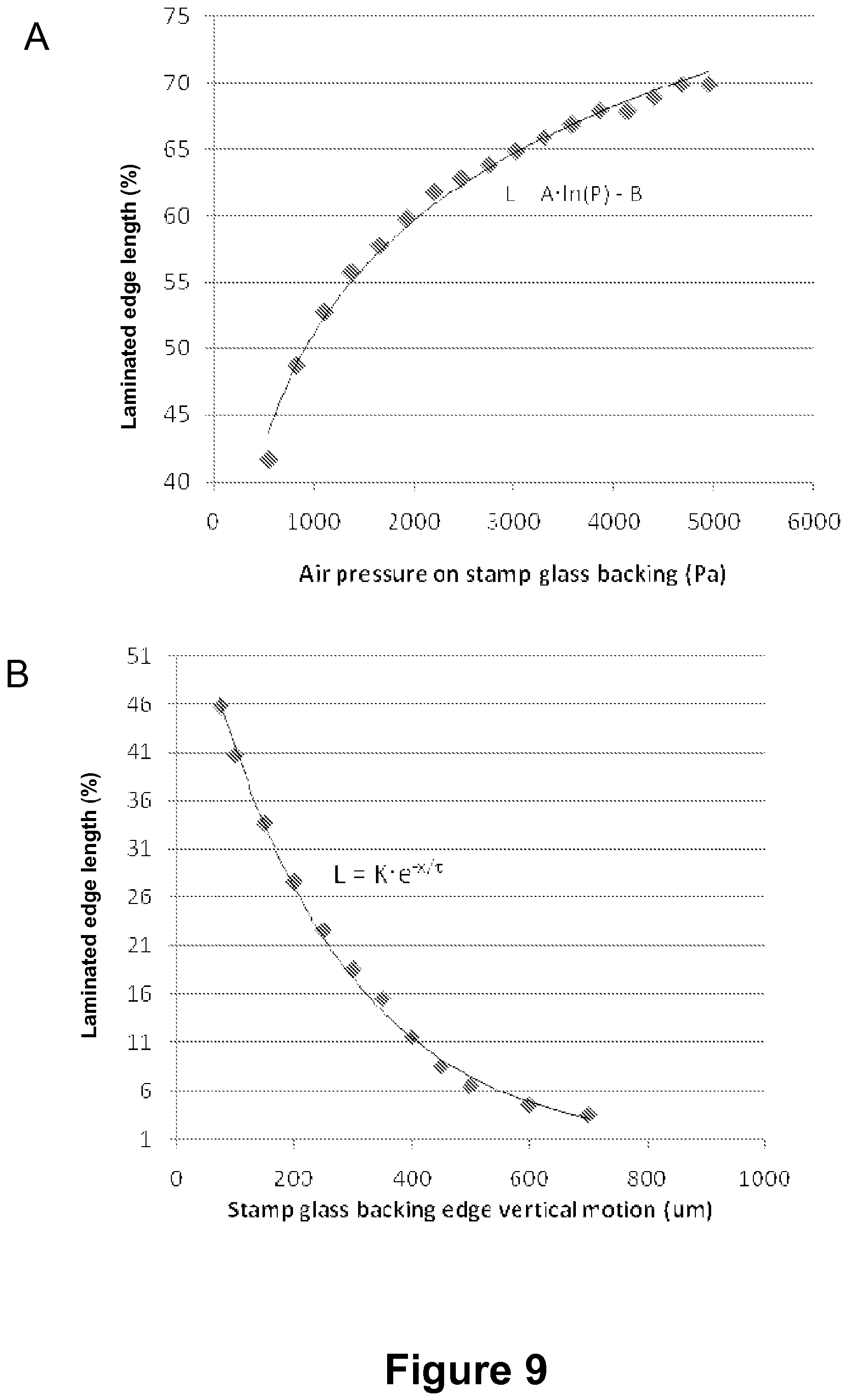