[0001] The present disclosure relates to a ferry that can be utilized for at least two different purposes, one of the purposes being the transport of passengers and vehicles, and the other one the recovery of oil.

[0002] It is often advantageous that passenger vessels can transport, in addition to passengers, at least some cargo, such as vehicles. A ship can also be constructed from the outset as a car ferry capable of easily transporting a significant number of vehicles, such as cars and/or lorries, in addition to passengers. However, passenger vessels have no other uses.
[0003] In archipelago areas, ferries generally transport passengers, vehicles and deck cargo between the mainland and the islands. Depending on their size, ferries usually carry several cars or at least one lorry on their car deck. Ferries also operate during winter, as they are capable of breaking ice. Ferries generally have a bow gate and/or stern door that can be opened and through which vehicles are driven to and from the car deck, as well as separate lounge facilities for passengers to use during the voyage. If a ferry has both a bow gate and a stern door, vehicles can be driven through the vessel, i.e. the vehicles will exit the vessel from the opposite end of where they entered the vessel. In this case passenger facilities are usually located above the car deck.
[0004] In addition to cargo vessels, several other types of specialised vessels are required at sea, for example oil recovery vessels. A problem related to oil recovery vessels is that a sufficient number of them is required in an emergency, but the need arises relatively seldom. Therefore keeping oil recovery vessels continuously in operational readiness without any other uses is uneconomical.
[0005] WO03/043878 discloses a ship with an arrangement for collecting oil. US5102540 discloses a kit for converting a conventional passenger catamaran into a liquid pollutant collector.

PURPOSE OF THE INVENTION

[0006] The purpose of the invention is to create a ship that can be used in a novel way at sea, for its original purpose in addition to other tasks. A further purpose of the invention is to solve the problem that the same vessel generally cannot be used for different purposes because different applications require compliance with varying safety regulations and different structural solutions.

CHARACTERISTICS OF THE INVENTION

[0007] A ship according to the invention is defined in claim 1. The invention is also defined by a method as mentioned in claim 4.
[0008] Preferred features of the invention are defined in the dependent claims.
[0009] An excellent advantage of the invention is that passenger vessels and ferries can easily and with short delays be available also for other uses when required because they are in almost constant use. A passenger vessel or a ferry equipped with an oil recovery apparatus can almost instantly be converted into an oil recovery vessel. Thus a vessel capable of recovering oil from the surface of water can be quickly dispatched to the site of an accident. Having a quick start to a recovery operation is often decisive in minimising the environmental damage from an oil spill.
[0010] A problem with traditional oil recovery vessels is that since accidents resulting in oil spills take place relatively seldom it is not viable to continuously maintain oil recovery vessels in high readiness. Due to the long response delays, traditional oil recovery vessels will not be available very quickly at the scene of an accident. In some cases, getting the vessels on their way can take up to 24 hours.

[0011] According to one embodiment of the invention, the ferry is 35 m long and 9 m wide. It is intended for regular ferry traffic, with adequate space for 11 cars or a single lorry and 125 passengers. The vessel can break 0.35 m thick ice, and its depth is 3.5 m. The draught in passenger vessel mode or as a ro-ro passenger vessel is 2.4 m, while as an oil recovery vessel it can be up to 2.9 m. However, in both applications the vessel can sail even in relatively shallow waters. The vessel is classified for traffic area D in Finnish passenger traffic and for traffic area II as an oil recovery vessel.
[0012] The following table shows a comparison of the characteristics of a ferry according to the example in passenger traffic and oil recovery applications.
Example 1. Comparison of dead weights

[0013] It is advantageous to minimise the necessary amount of ballast. Resetting the characteristics of the vessel can be accomplished by relocating the fuel between the fuel tanks in the bow and in the double hull.

EXAMPLES SHOWN IN THE DRAWINGS

[0014] In the following, the invention is described by an example with reference to the accompanying drawings, in which

[0033] It is obvious to a person skilled in the art that the different embodiments of the invention may vary within the scope of the claims presented below.

3. The ferry (10) according to claim 2, characterized in that the bow superstructure (34) can replace a bow gate (22) of the ferry (10) and be locked in place in order to use the ferry for oil recovery.

5. The method according to claim 4 characterized in that a space (23) intended for passengers on a deck (20b) of the ferry is converted so as to be suitable for recovering oil by making said space gas-tight and separate from the space intended for oil recovery and/or by pressurising it. 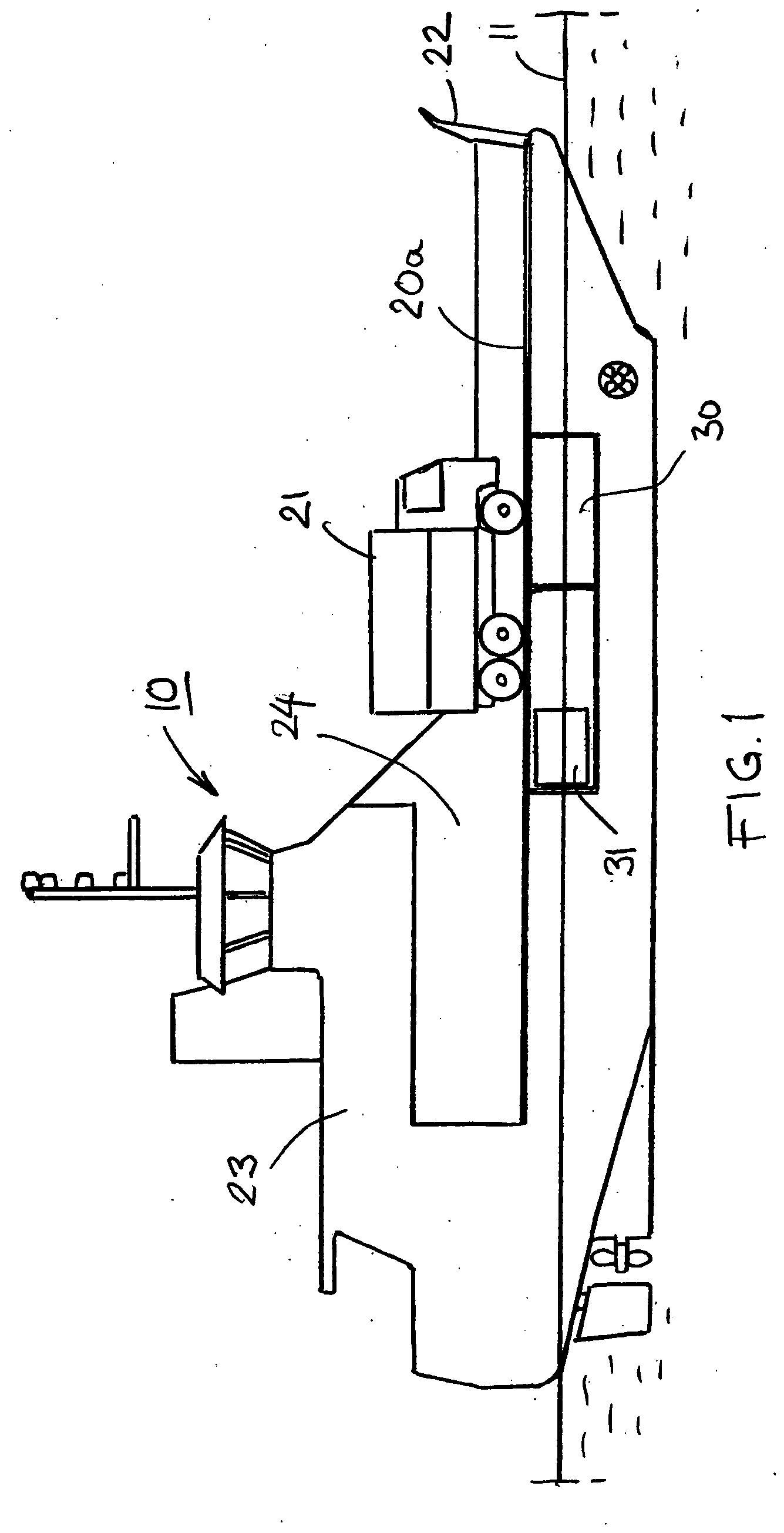 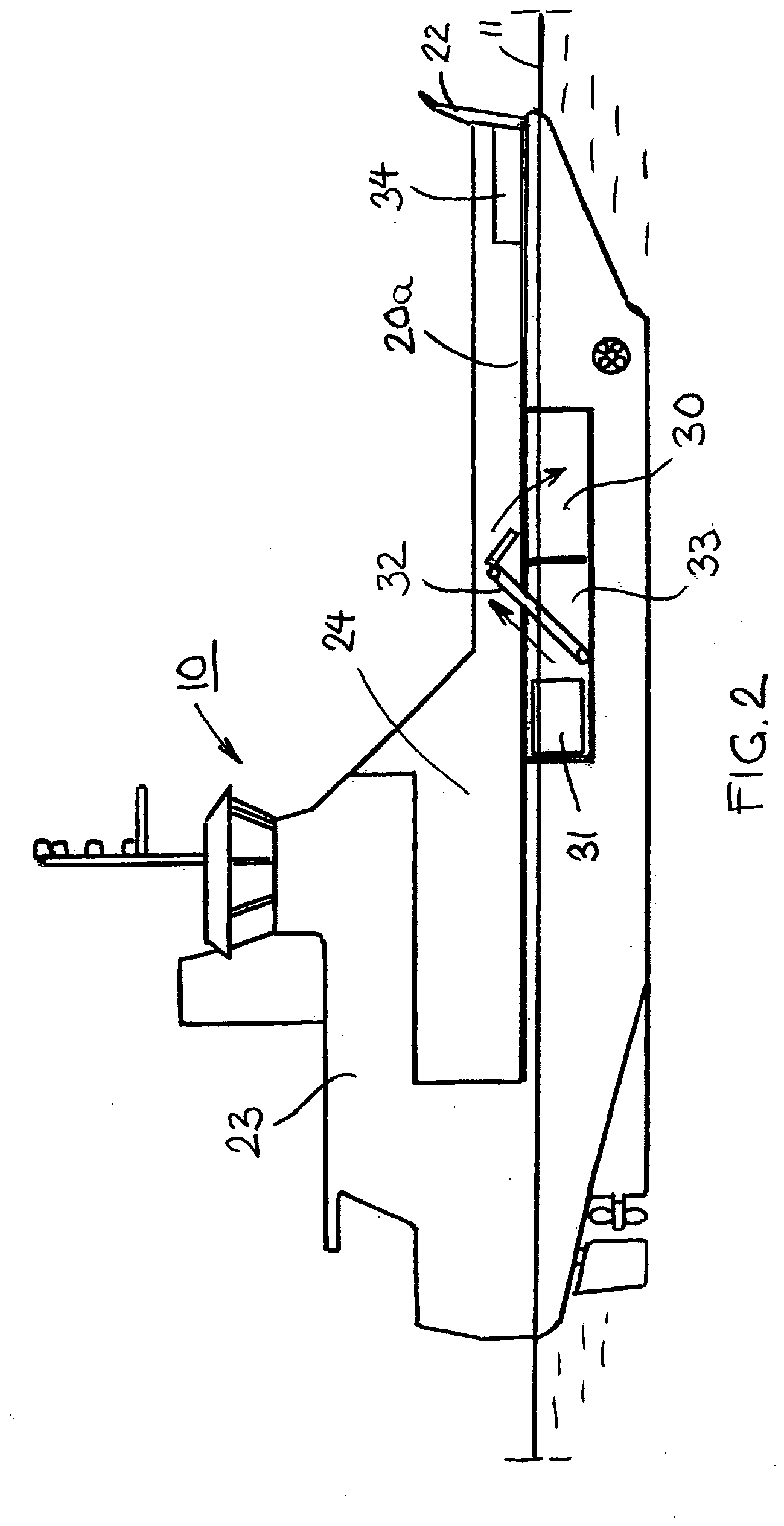