[0013] In accordance with the objects outlined above, the present application describes compositions comprising a plurality of nucleic acids, each nucleic acid comprising an invariant sequence, a variable sequence and a label. In a first aspect, the invention provides a method of identifying a nucleotide in a candidate sequence, said method comprising:
[0014] In a second aspect, the invention provides an array substrate comprising:

Figure 1 depicts the sequence of 14 probes attached to beads.

Figure 3 is a graph depicting that the correct identification of the bases at position 11 and 12 (the terminal and terminal-1 positions) is achieved via competition using 20% formamide in the hybridization buffer.

Figure 6 depicts a method of using a DNA array to sequence.

[0076] This type of probe set is universal in that any target sequence can in principle be analyzed. In a preferred embodiment the probes are used to decode an array as described herein.
[0077] There are various difficulties with the approach that have previously hindered its effective implementation. Primarily, the number of probes required scales exponentially with probe length. For example, to represent each possible nucleic acid of a combinatorial probe of 8 nucleotides in length would require the synthesis of 65,356 nucleic acids. However, by the use of the split and mix combinatorial synthesis, synthesizing this number of nucleic acids requires only eight steps. That is, to synthesize probes of length n requires at least 4n reactions, and generates 4n sequences (Table 1). However, as each of 4 nucleotides are reacted simultaneously (yet independently) in each step, the number of steps required to synthesize a vast number of probes is minimized.
Table 1 . The number of unique probe sequences scales exponentially with probe length. 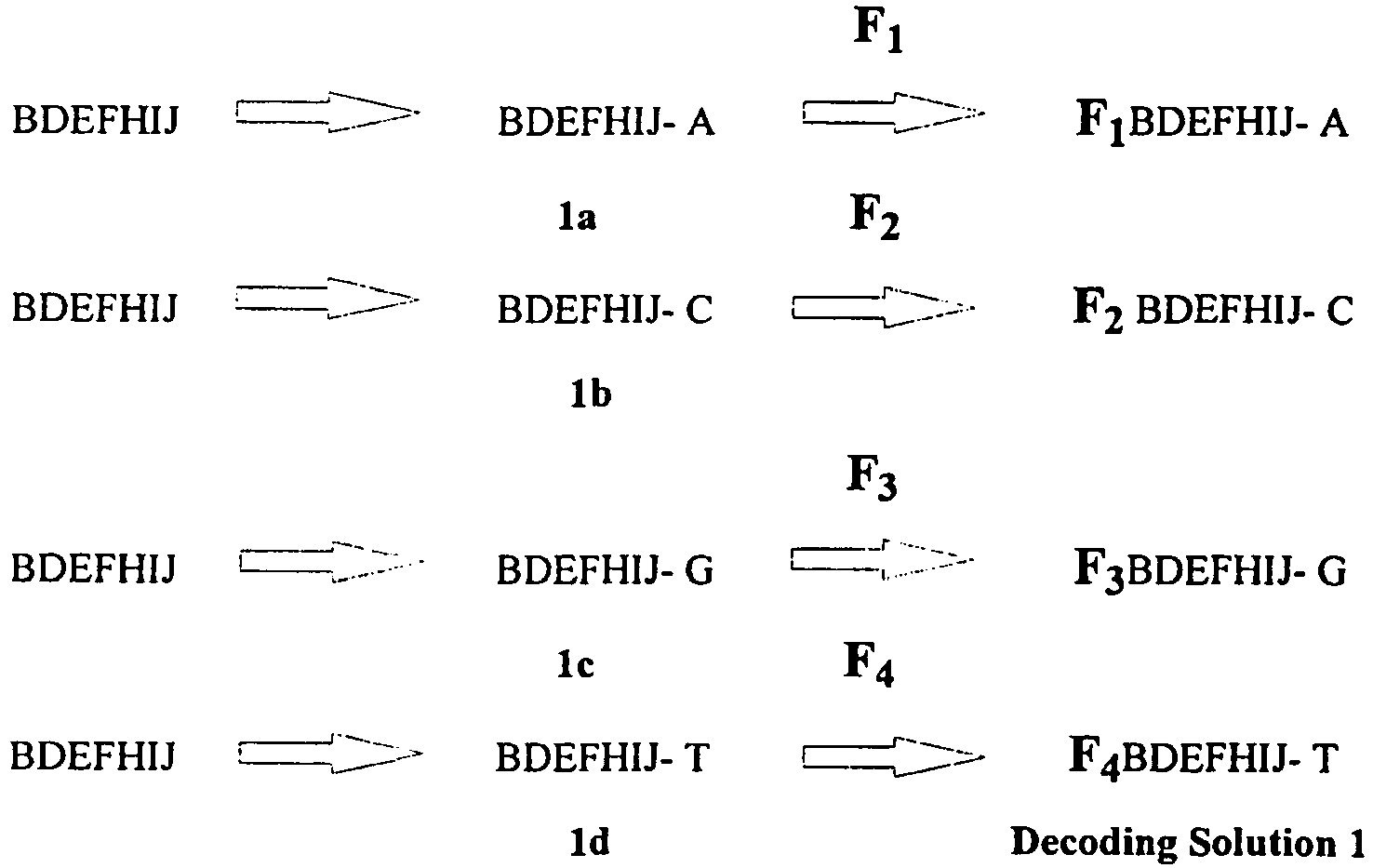 [0119] The combined, but unlabeled, 1a-d pooled solution is then divided into four portions and used iteratively in split and mix to prepare all possible sequences up to n-mers . 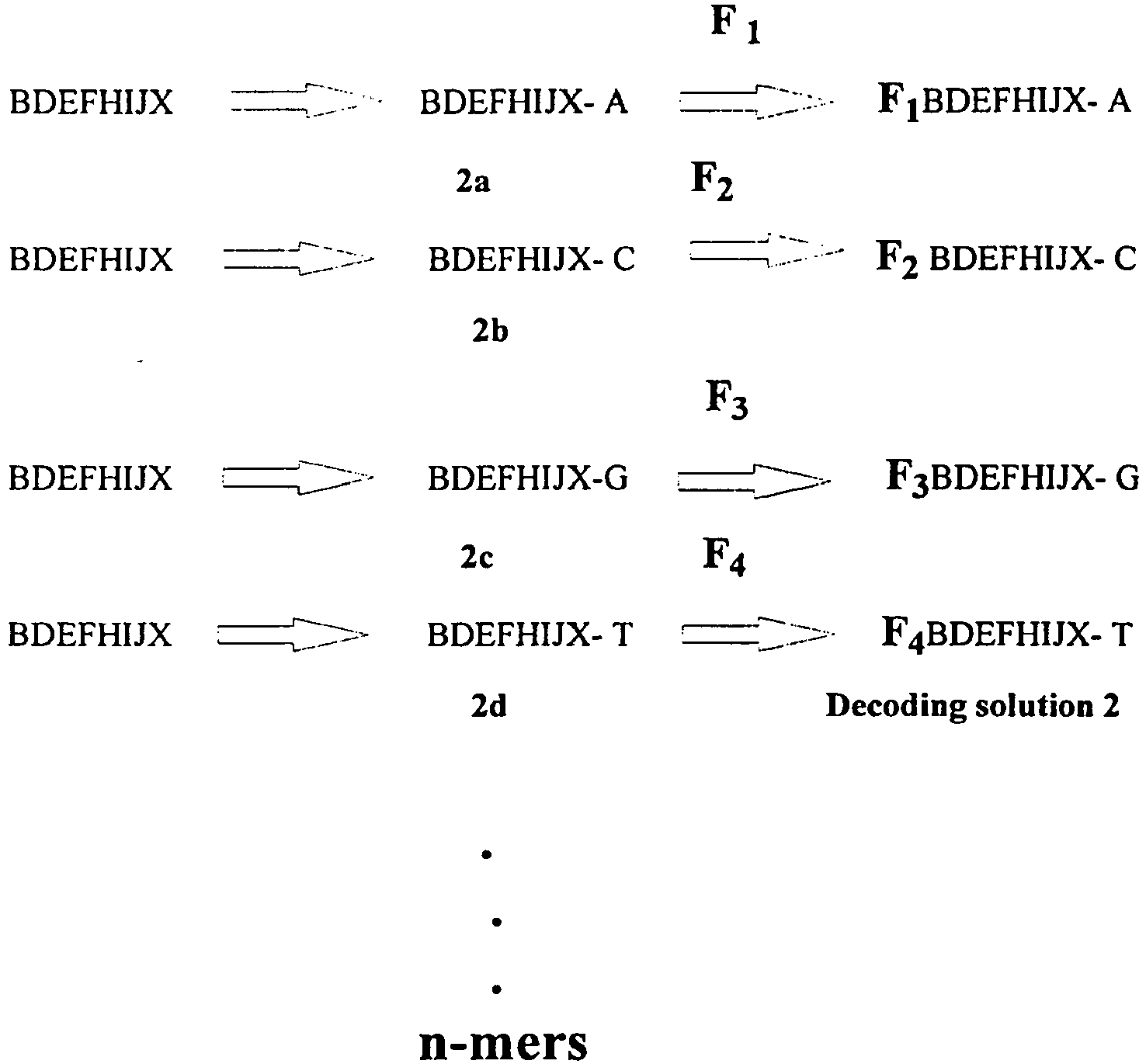 [0132] In an alternative embodiment, when each nucleotide of the detection position is labeled with the same label, decoding may still proceed. In this embodiment, after each step of the split and mix synthesis, as described above, aliquots of each solution are set aside as four separate decoding solutions. The remainder of the solutions are pooled and split and mix synthesis proceeds. Decoding is accomplished by exposing the array to each decoding probe sequentially and analyzing the label. Although decoding in this manner necessitates additional steps, the user only needs to label probes with a single label. In addition, label detection is facilitated when the user does not have the equipment to analyze multiple different signals. An example is illustrative.
[0133] Again, the primer sequence BDEFGHIJ is synthesized. However, in contrast to the synthesis above that utilized a different fluor for each additional nucleotide, in this embodiment, the same fluor is used at each step of synthesis, although different nucleotides are added the primer sequence. 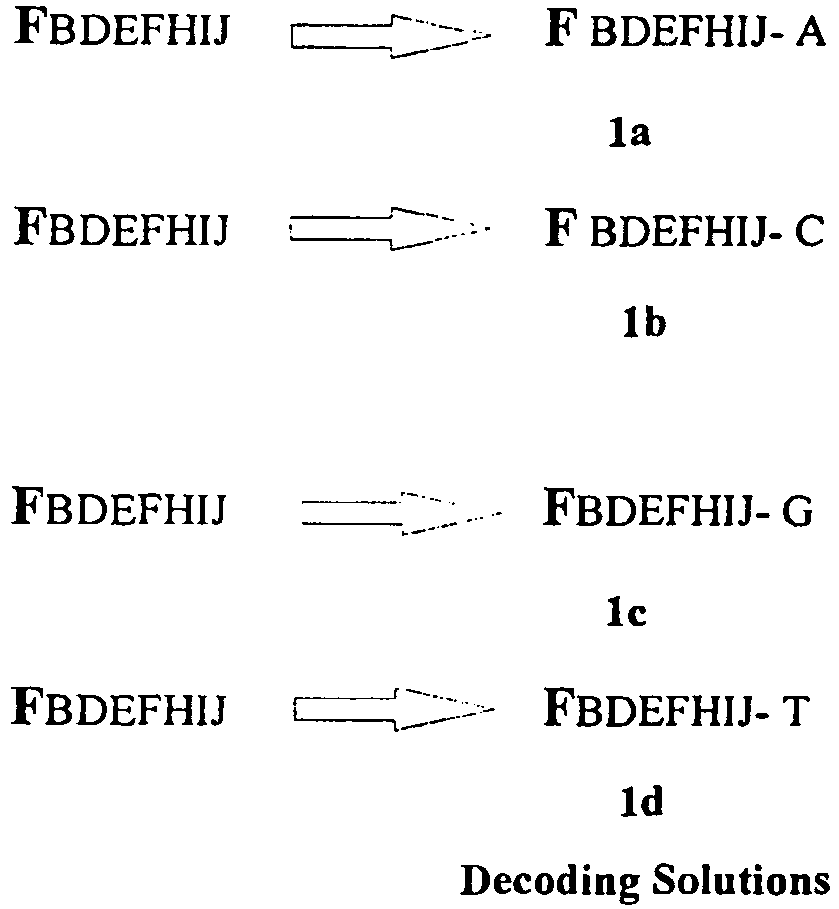 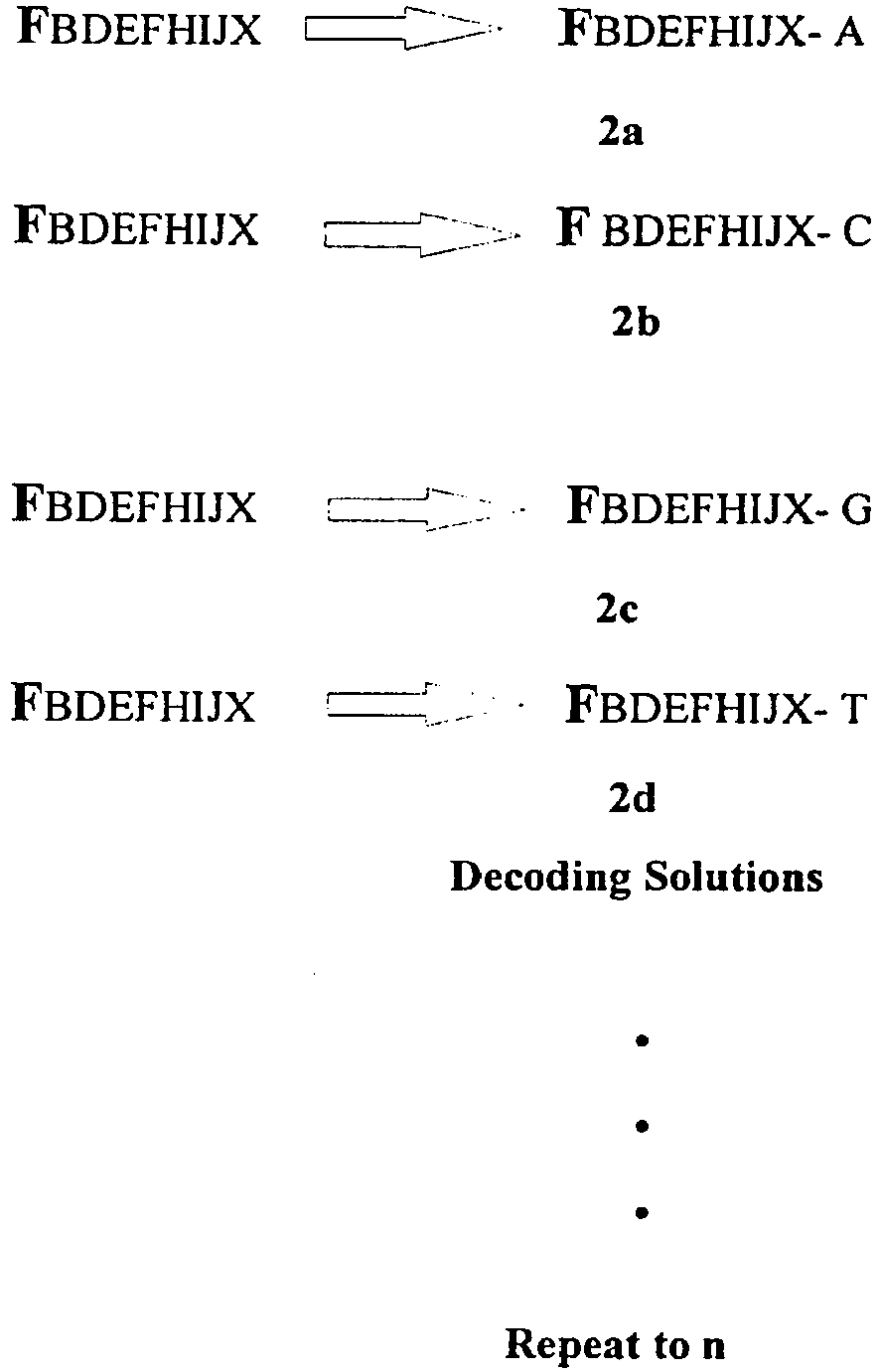 [0136] In an alternative embodiment, decoder probes that make use of internal (as opposed to terminal) detection nucleotides are used to decode the array.
[0137] The success of the decoding approaches described above depends on the fidelity of hybridization. The schemes above rely on the ability to differentiate sequences at the terminal base pair.
[0138] A particular preferred embodiment includes an alternative approach that can be employed in which internal bases are used to decode. In this approach, internal sequence positions are decoded with essentially the same scheme employed above. An example is illustrative. X represents all possible bases at the designated positions. In this manner, stringency requirements can be relaxed due to the lower propensity for internal mismatches to hybridize.

The probe consists of the anchor + 4 bases. The 4 base sequence used is AAAA. The probe is attached to the bead at the 3' end.

[0186] The target consists of the anchor's complement + 4 bases: 5'-dye-C CTC GAC C + XXXX-3' The dye is attached to the 5' end of the probe. The target mixture contains all 64 possible targets. Briefly: there are 4 solutions each containing 16 targets. Each of the 4(16) target solutions has a different dye label and the base applied at, e.g., 9 is known. Once the 4 target solutions are mixed (named, e.g., Mx9), the total target number is 64.

Example of targets where position 9 is known:

Assay with one bead type

[0191] The beads were placed in a fiber. The 4 base tail sequence was identified with 4 solutions (Mx9, Mx10, Mx11, Mx12). E.g., the fiber was placed in Mx9 for 5 minutes, rinsed in buffer, and images were acquired at the 3 wavelengths. The fiber was then placed in a 3 µg/ml F1-streptavidin solution. A second image was acquired at the 495/530 setting. To analyze the data for position 9, the average fluorescence intensity from (30) beads was acquired for each wavelength. The average background signal (3-5 blank wells) for each wavelength was subtracted from the average fluorescence intensity. (The F1-streptavidin intensity was the second (F1-streptavidin) 495 intensity minus the first fluorescein intensity.) The designation of the base at each position was generated from the data acquired using 20% formamide. The label generating the highest fluorescence intensity was the perfect complement.
[0192] The process was repeated with probes labeled at positions 10, 11 and 12. Results are depicted in Figures 2-4.

1. A method of identifying a nucleotide in a candidate sequence, said method comprising: 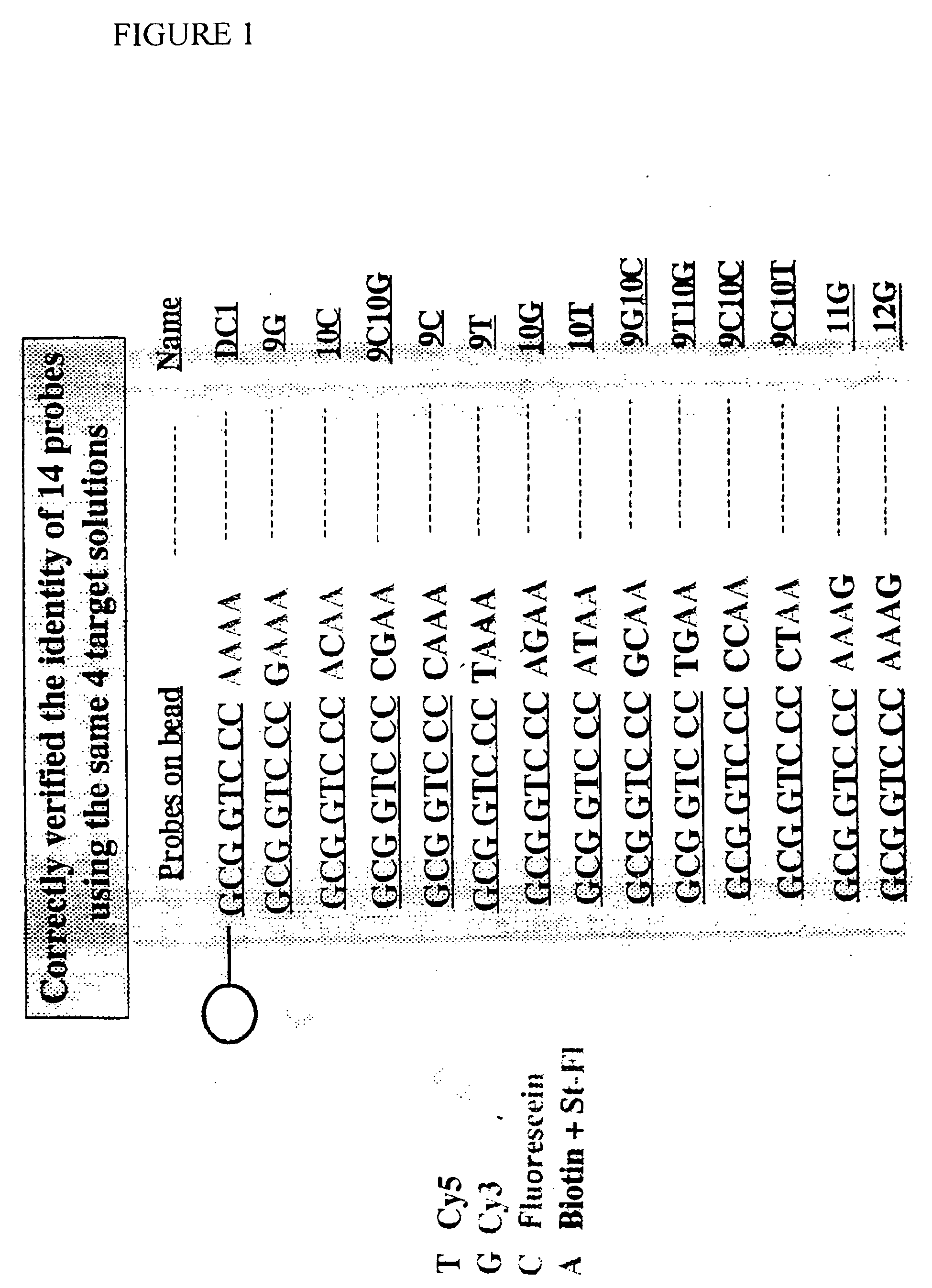 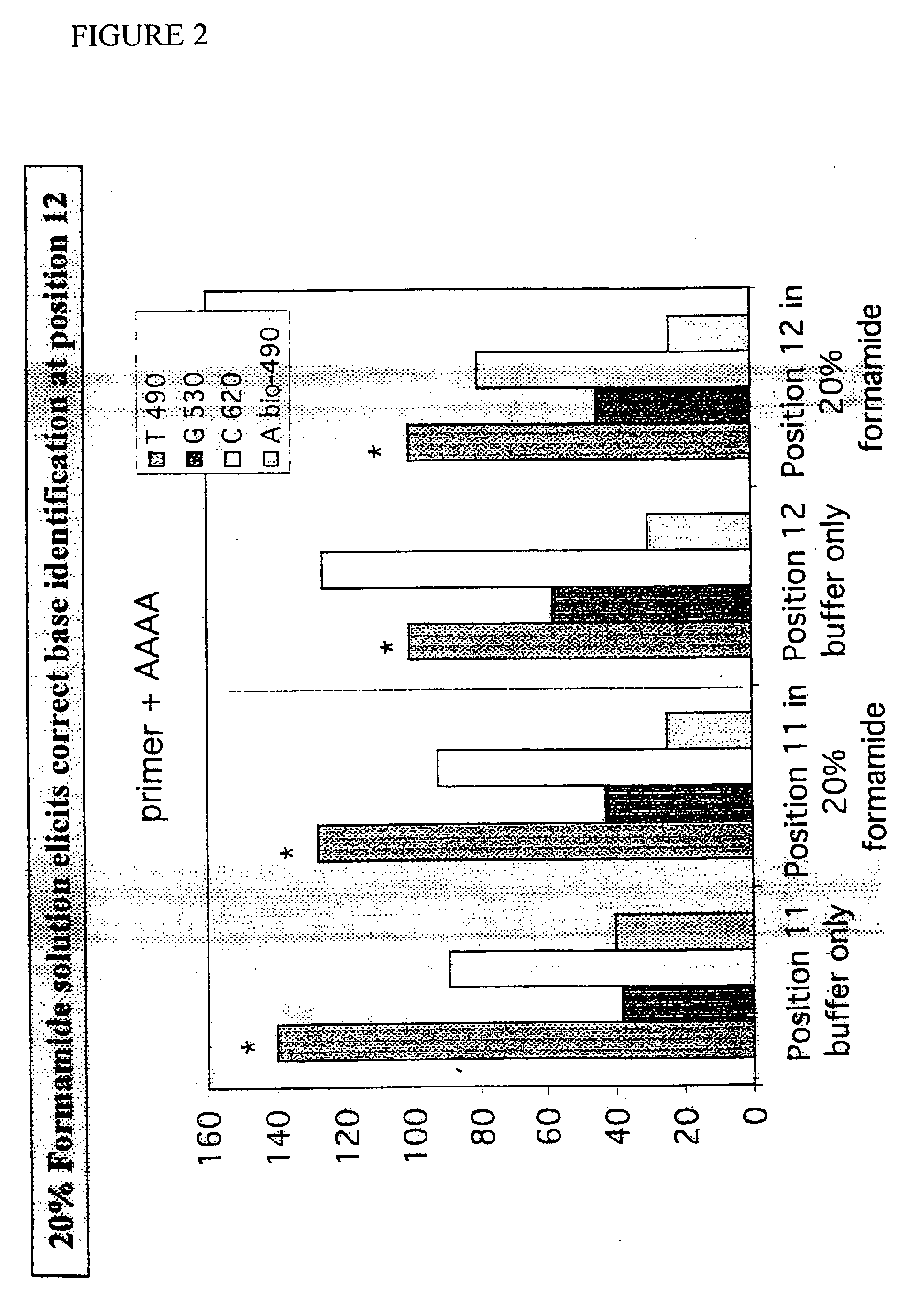 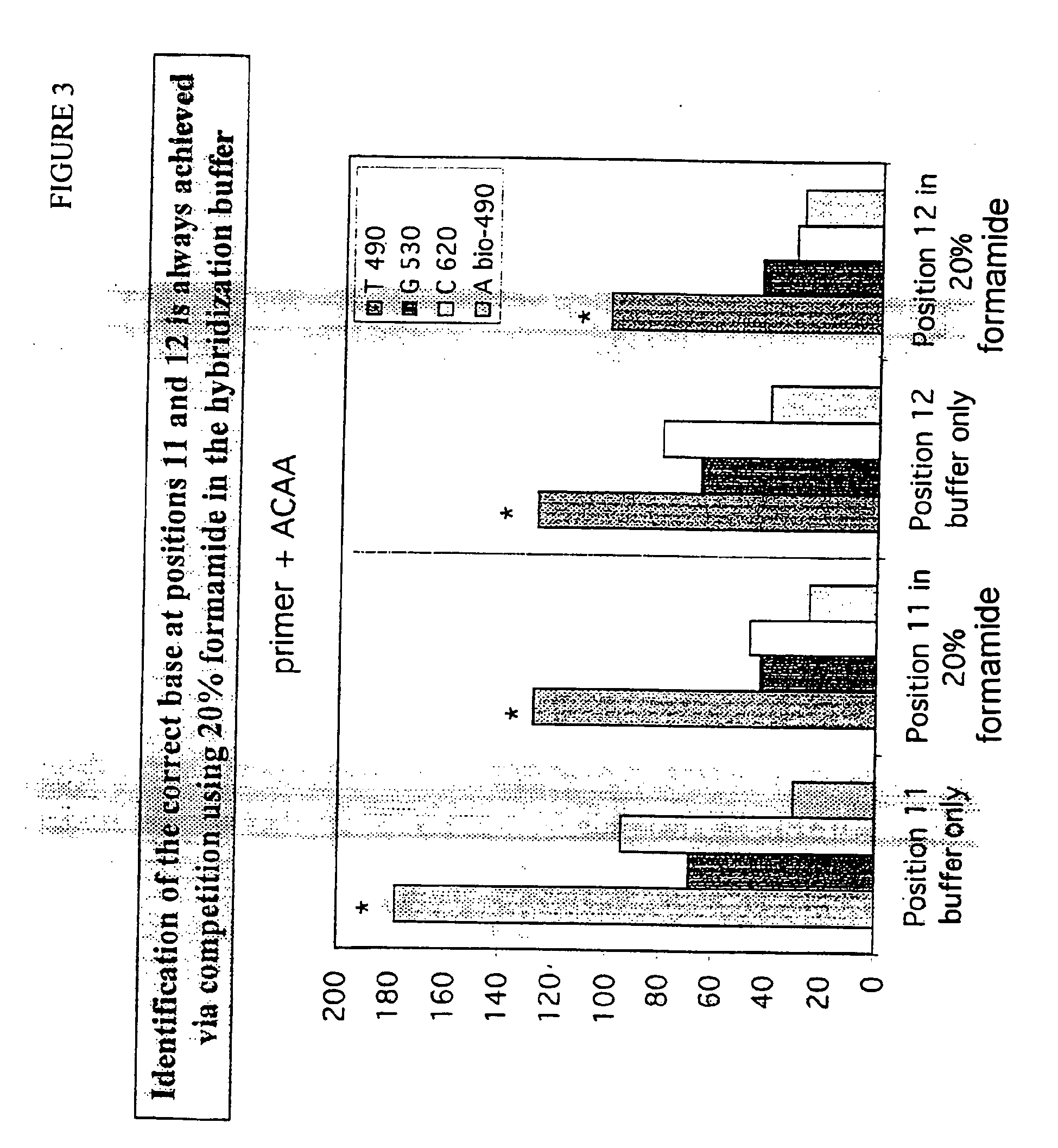 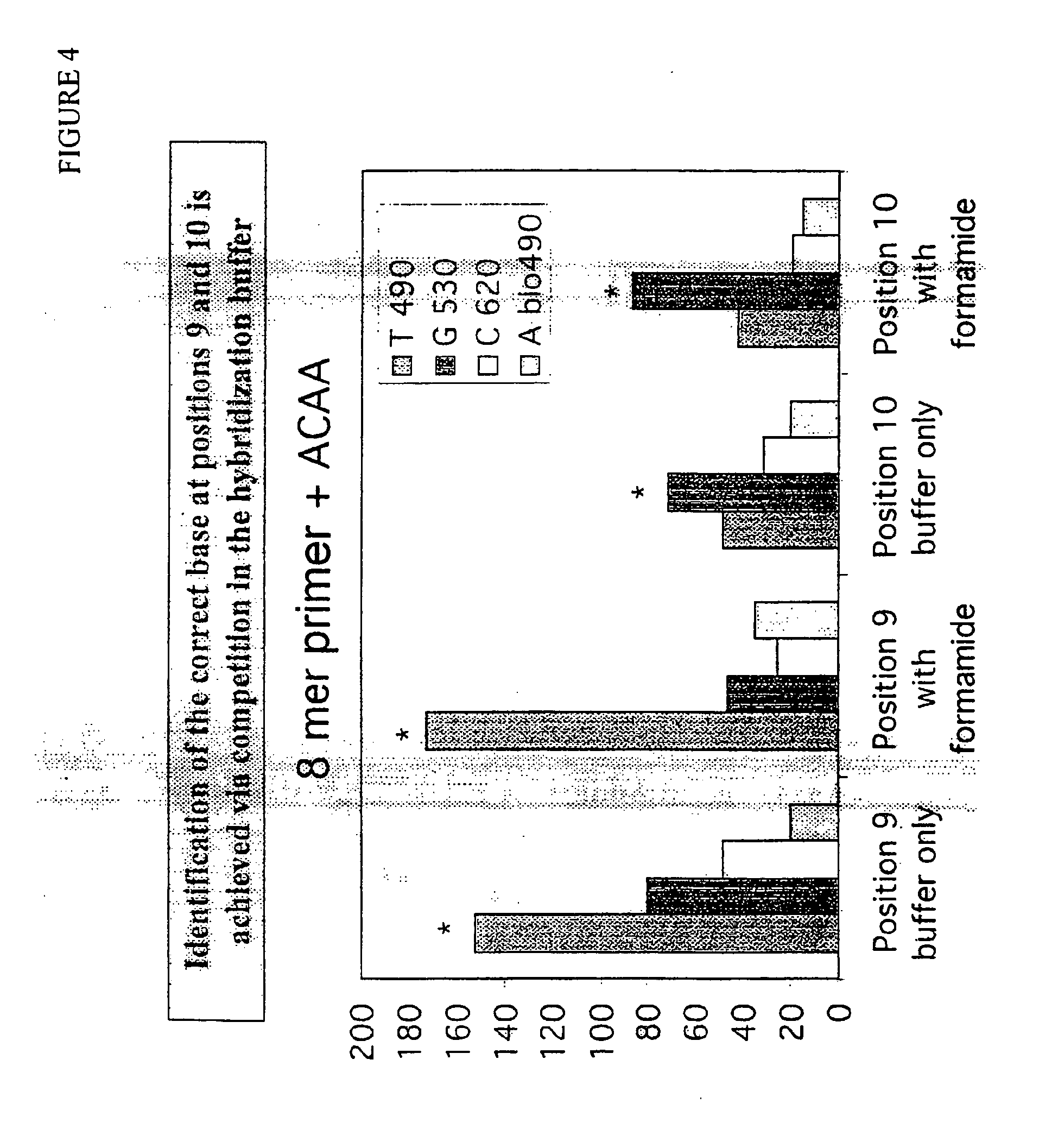 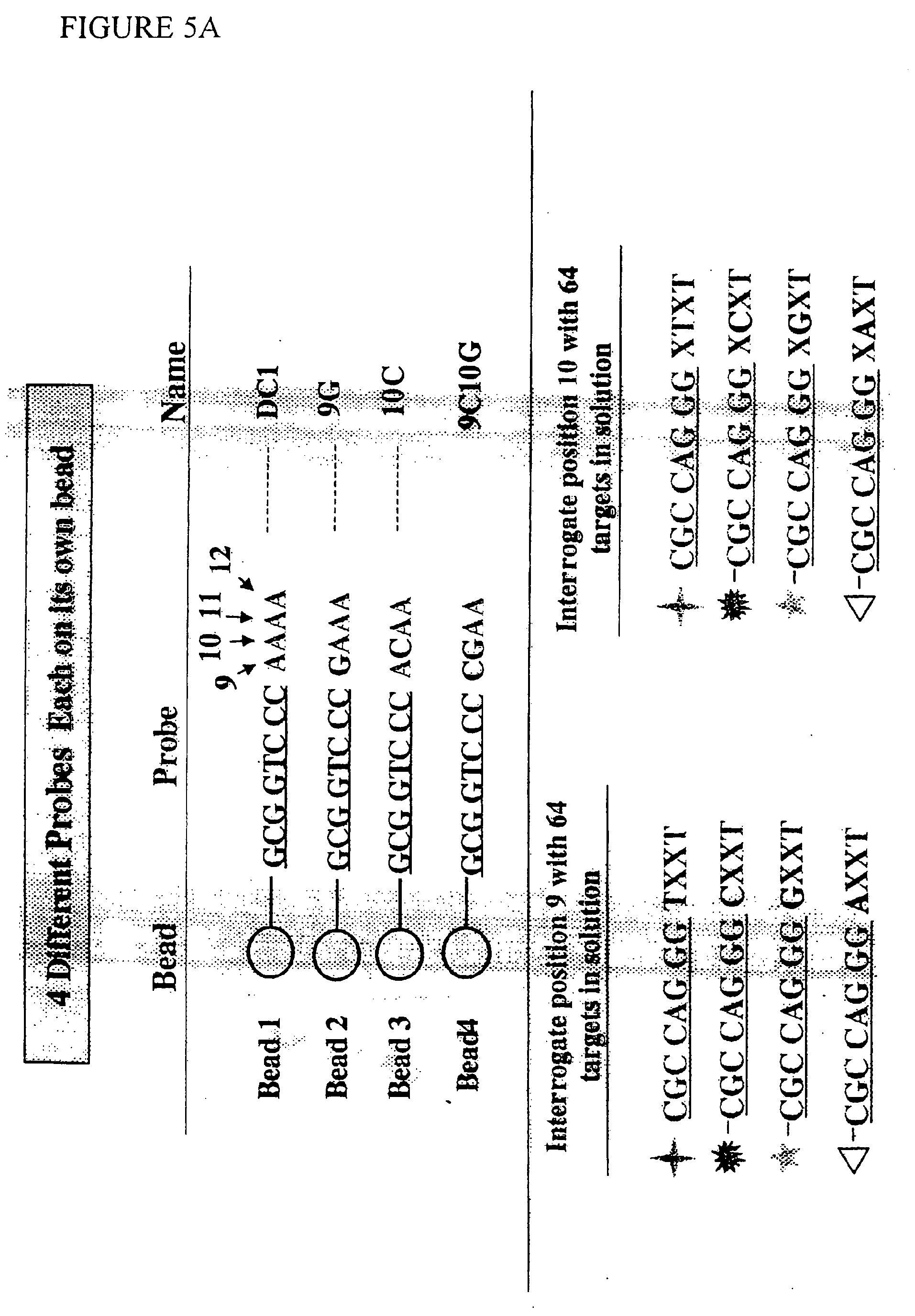 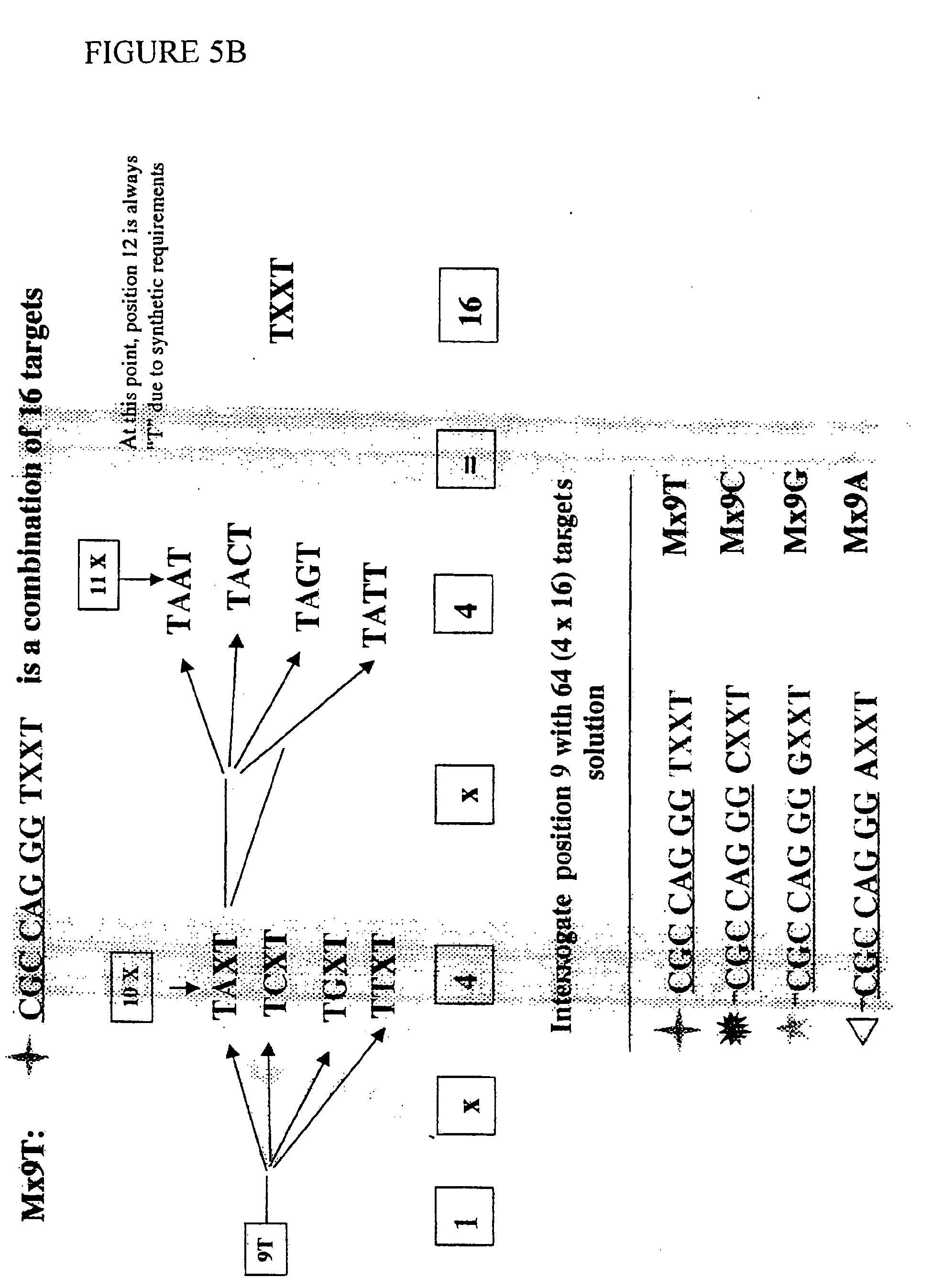 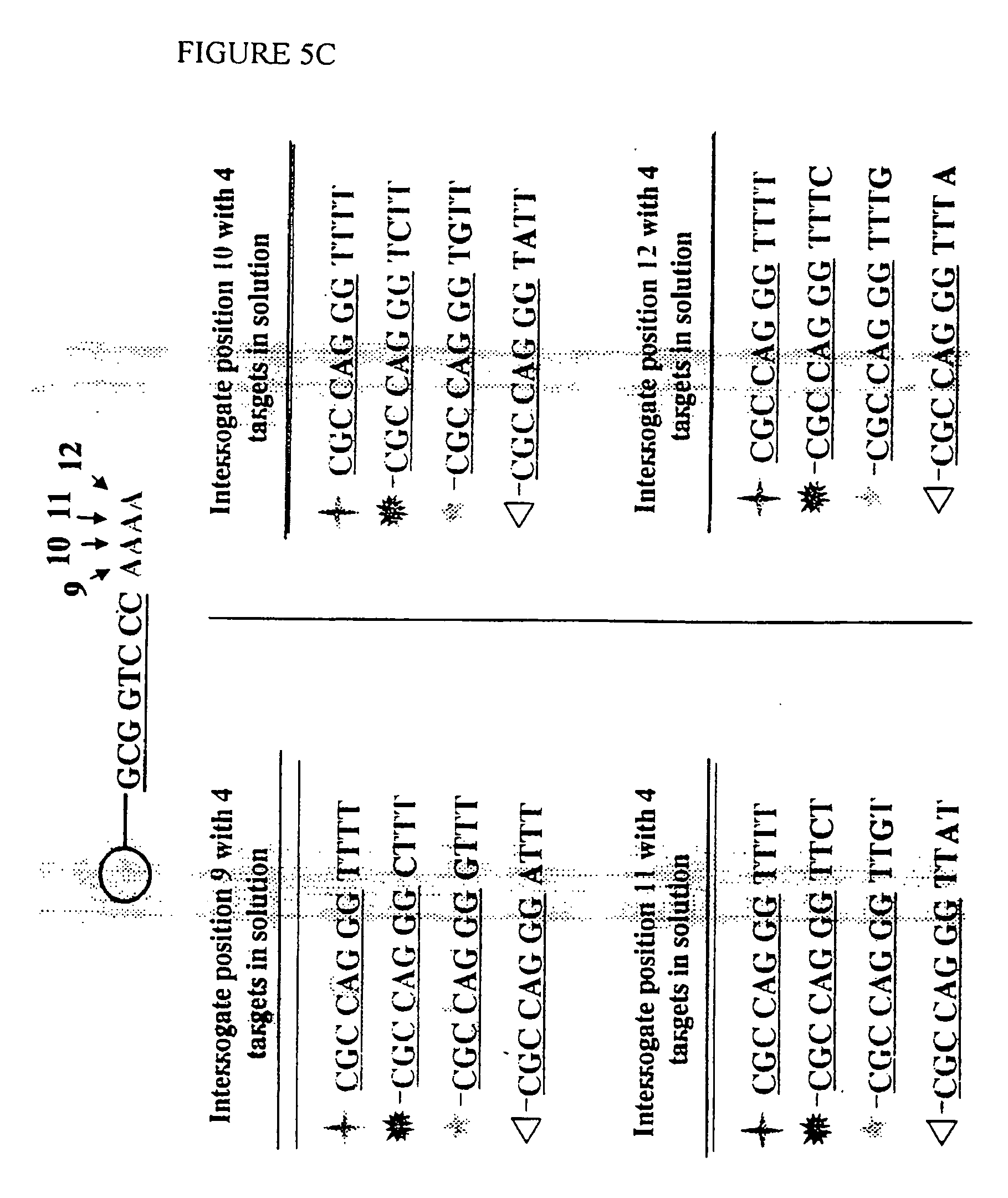 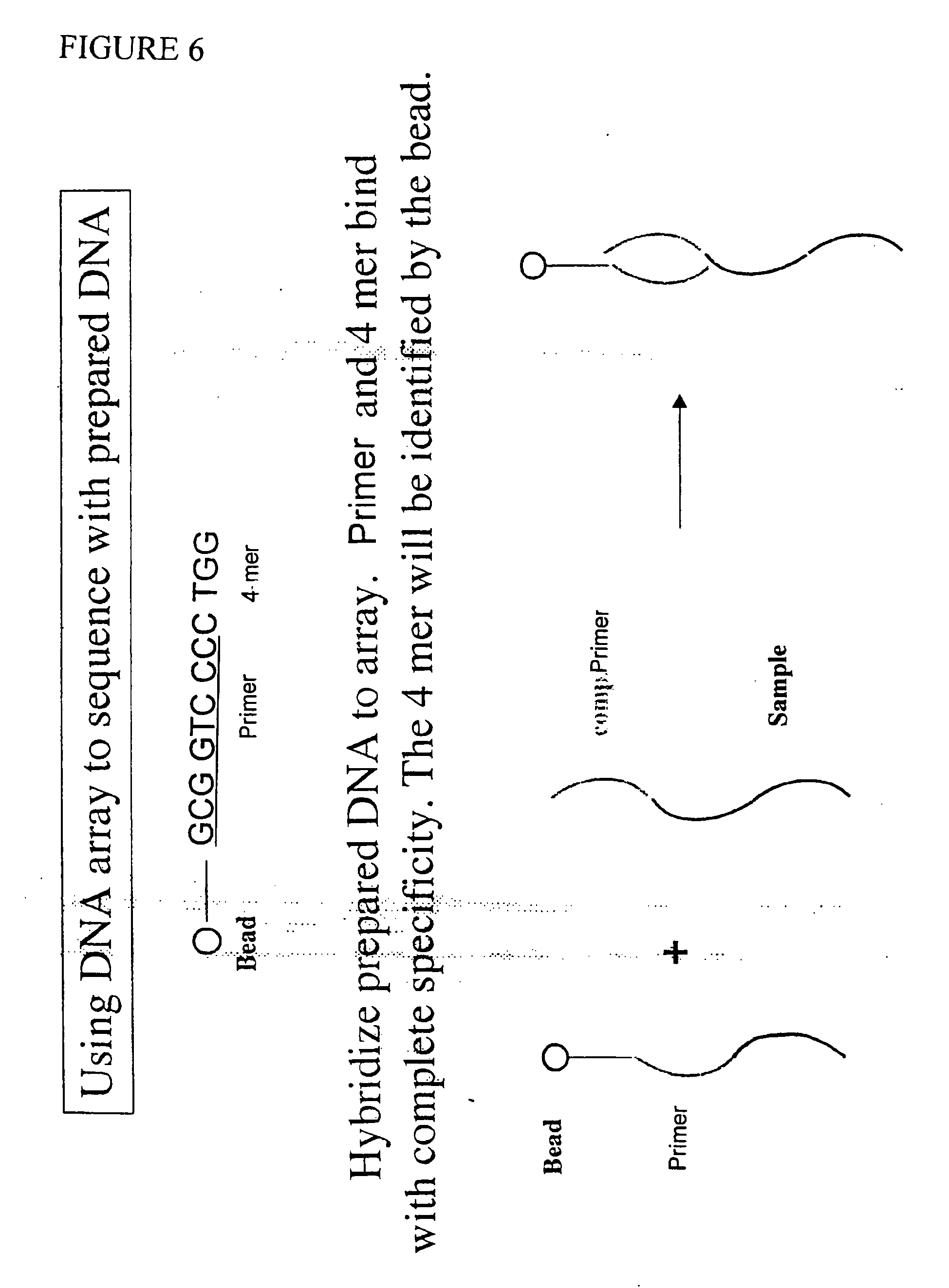 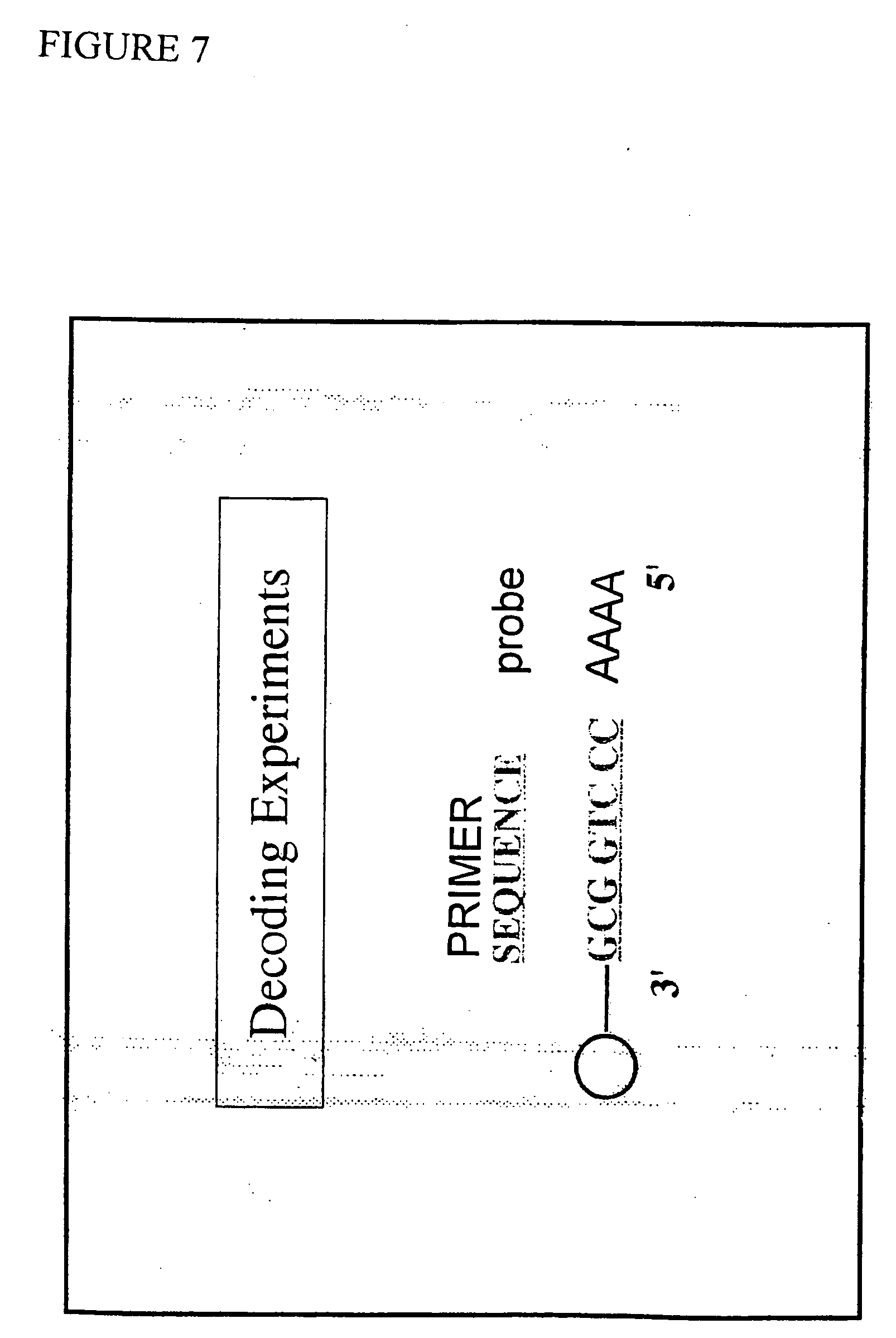