[0002] Digital printing is used widely in the field of printing, particularly for the preparation of prototypes, low quantity print runs, and for the customization of print media. In contrast to many other printing techniques, digital printing does not require the preparation of costly printing plates and therefore allows for rapid transitioning between designs.
[0003] Despite its advantages, it is believed that digital printing has not been used to make heat transfer labels. Heat transfer labels are labels that are printed in reverse onto a release carrier and transferred to a container using heat and pressure. Instead, gravure or flexographic printing processes are typically used to make heat transfer labels, pressure sensitive labels, and other types of labels. Unfortunately, since it can take several weeks to prepare the printing cylinders or plates, the manufacturer must design the label well in advance of the actual decorating. As a result, the manufacturer is unable to make last minute changes to accommodate current promotions, product information changes, or to meet current demands in the marketplace. Additionally, the manufacturer may end up with an excess of decorated (i.e., labeled) containers in its inventory and/or may not have sufficient time to get new decorated containers into the marketplace.
[0004] The present inventors have discovered that there are unique challenges associated with the use of digital printing technology to print onto substrates with release layers. In particular, the heat associated with the digital printing process can cause premature softening of the release layer, which may result in defects in the print quality of the label and/or the decorated container. Thus, there remains a need for a heat transfer label and assembly suitable for use with digital printing. There also remains a need for a method of making a decorated container that allows greater flexibility in label design, reduces the time to market, and reduces the need for excess inventory.
[0005] US 2006/0172094 discloses an image transfer medium for transferring a printed image to a substrate which comprises an image receiving laminate and an image protecting laminate. The image receiving laminate preferably comprises a base, a release coating coated directly on a surface of the base, a thermoplastic layer coated directly on the release coating, and an ink-receptive layer coated directly on the thermoplastic layer. Alternatively, the thermoplastic layer can be omitted and the ink-receptive layer can be deposited directly onto the release layer. The ink-receptive layer preferably comprises a polymeric binder, e.g. an ethylene/ acrylic acid copolymer, and polymeric particles, e.g. polyolefin particles. The image protecting laminate preferably comprises a base, a release coating coated directly on a surface of the base, and a thermoplastic layer coated directly on the release coating. In one possible use, an image is reverse-printed on the ink-receptive layer. The thermoplastic layer of the image protecting laminate is heat-bonded to the substrate, and its release liner is peeled away. The image is then placed on top of the bonded thermoplastic layer, and heat and pressure are applied to the release liner of the image receiving laminate until the ink-receptive layer and the image bond to the bonded thermoplastic layer. The remaining release liner is then peeled away.

[0006] The invention provides a method of making a heat transfer label assembly, the method comprising directly depositing a primer onto a release layer supported on a carrier, wherein the release layer comprises a material that softens upon sufficient exposure to heat and the primer comprises a polyacrylic acid polymer and a polyethylene polymer in a ratio of 4:1 to 6:1 and prepares the surface of the release layer for receiving ink, and depositing ink onto the primer by digitally printing the ink onto the primer.
[0007] The primer preferably comprises one or more materials that work in concert to assist with maintaining the stability of the heat transfer label assembly during the digital printing process.
[0008] Other features and aspects of the invention will be apparent from the following description and the accompanying figures.

[0009] The description refers to the accompanying drawings in which like reference characters refer to like parts throughout the several views, and in which:

FIG. 1A is a schematic cross-sectional view of an exemplary heat transfer label assembly;

FIG. 1B is a schematic perspective view of a decorated container including, for example, the label of FIG. 1A;

FIG. 2 is a schematic cross-sectional view of another exemplary heat transfer label assembly;

[0035] A heat transfer label assembly was prepared using digital printing. The ink was printed directly onto the wax side of a wax-coated paper. The wax somewhat softened during the printing process, presumably because the softening point of the wax (about 57°C) was slightly lower than the temperature of the ink applied (about 30-40°C). The premature softening of the wax rendered the label unsuitable for further use and evaluation.

[0036] A heat transfer label assembly was prepared using digital printing and a commercially available primer. First, paper having a basis weight of about 30 lb/ream coated with about 6 lb/ream wax (coat weight varied from about 4-9 lb/ream) was coated on the wax side with about 1 lb/ream of DIGIPRIME 4450 primer (Michelman, Inc., Cincinnati, Ohio). The primer was dried at a temperature of about 38°C at a line speed of about 50 ft/min. Next, an HP 4450 digital printer was used to apply a printed design over the primer.
[0037] The completed structure then was applied to a polyethylene terephthalate container in the conventional manner under heat and pressure (preheater temp about 90°C, platen temperature about 190°C +/- 25°C). The results were acceptable and comparable to conventional heat transfer labels (e.g., printed using gravure printing or other conventional printing techniques). However, some "stringing" was observed as the wax-coated paper was separated from the label.

[0038] A heat transfer label assembly was prepared using digital printing and a primer including a polyacrylic acid polymer. Specifically, DIGIPRIME 4500 primer (Michelman, Inc., Cincinnati, Ohio) (previously termed "GPI X5" by Michelman, Inc. as an experimental primer) was applied to a wax-coated paper (same as used in Example 2) in an amount of about 1 to 1.5 lb/ream (dry). As stated previously, it is believed that DIGIPRIME 4500 primer may include at least one polyacrylic acid polymer and possibly one or more non-polymeric additives, for example, silica, wax, and/or talc. It is also believed that DIGIPRIME 4500 primer has a lower tensile strength than the DIGIPRIME 4450 primer.
[0039] The completed structure then was applied to a polyethylene terephthalate container in the conventional manner under heat and pressure as described in Example 2. The label was successfully applied without stringing. Thus, digital printing was used to prepare a heat transfer label successfully. While not wishing to be bound by theory, it is believed that the primer reduced heat transfer from the digitally applied ink to the wax-coated paper and assisted with reducing the stringing of the label when the remainder of the structure was removed.

[0040] Various primer compositions were used to prepare heat transfer label assemblies and evaluated as described in Example 3. The primer compositions included DIGIPRIME 4501 primer (about 21.5% solids, as provided) (Michelman, Inc., Cincinnati, Ohio) (previously termed "GPI X12" by Michelman, Inc. as an experimental primer) and, in some examples, ADCOTE 50C35 adhesive (about 34.0% solids, as provided) (Rohm & Hass, Philadelphia, Pennsylvania). The results are set forth in Table 1, in which the solids ratio refers to the ratio of DIGIPRIME 4501 primer solids to ADCOTE 50C35 adhesive solids, and in which all values are approximate. It will be noted that although some blocking was observed with Sample 4, it is contemplated that this may be addressed using anti-blocking agents or otherwise. Samples 3 and 4 are according to the invention, while samples 1 and 2 are comparative samples.
Table 1.

2. The method of claim 1, further comprising depositing an adhesive (110) onto the digitally printed ink (108), such that the ink is positioned between the primer (106) and the adhesive (110).

4. The method of any of claims 1 to 3, wherein the polyacrylic acid polymer comprises an ethylene acrylic acid copolymer.

5. The method of any of claims 1 to 4, wherein the primer (106) further comprises at least one of silica, wax and talc.

6. The method of any preceding claim, wherein the release layer (104) comprises a wax.

7. A method of decorating a container (114) using a heat transfer label assembly to decorate the container, comprising:

making a heat transfer label assembly (100) by the method as claimed in any of claims 1 to 6;

applying heat to the heat transfer label assembly (100) in contact with the container (114) so that the release layer (104) softens; and 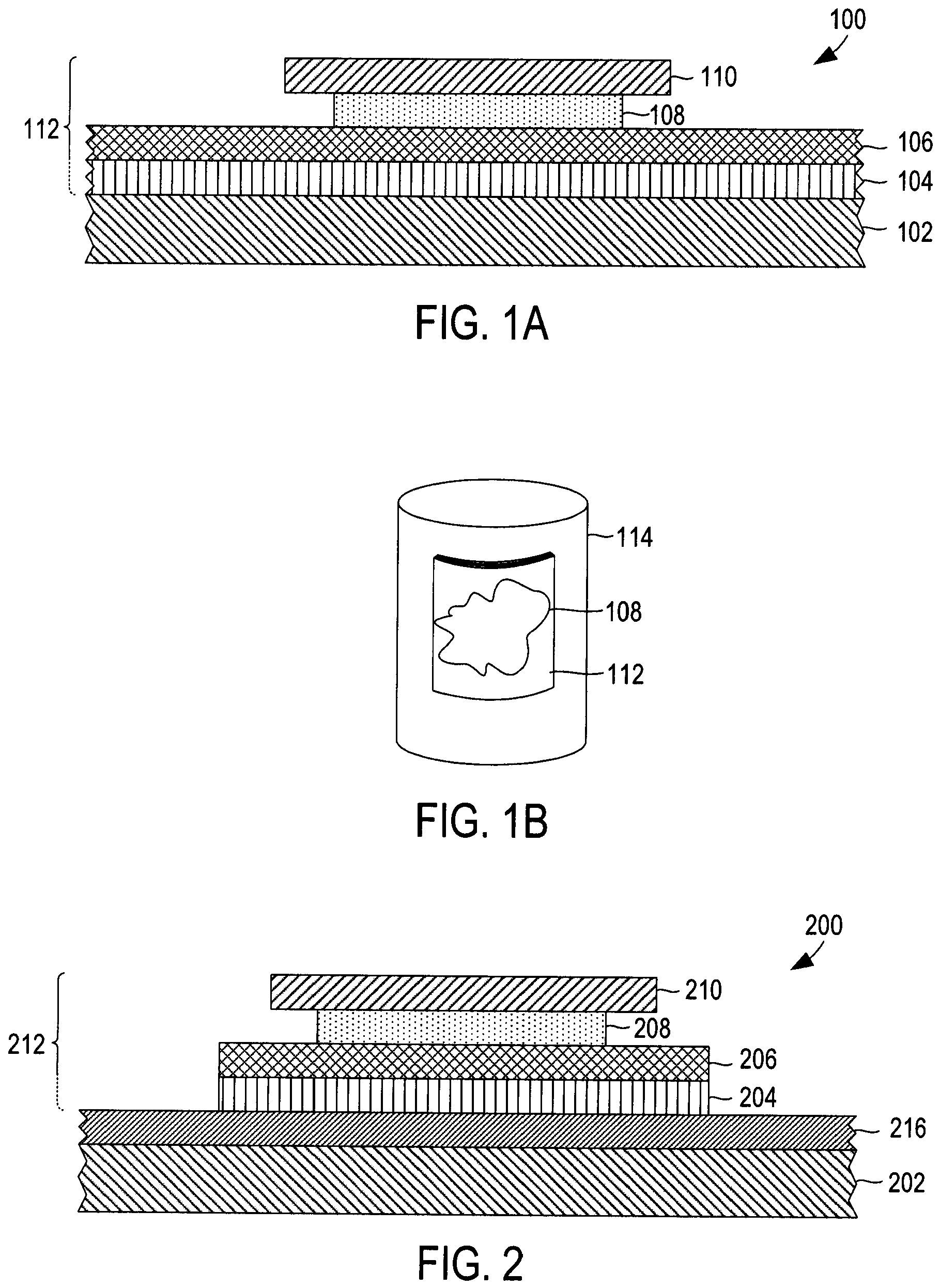 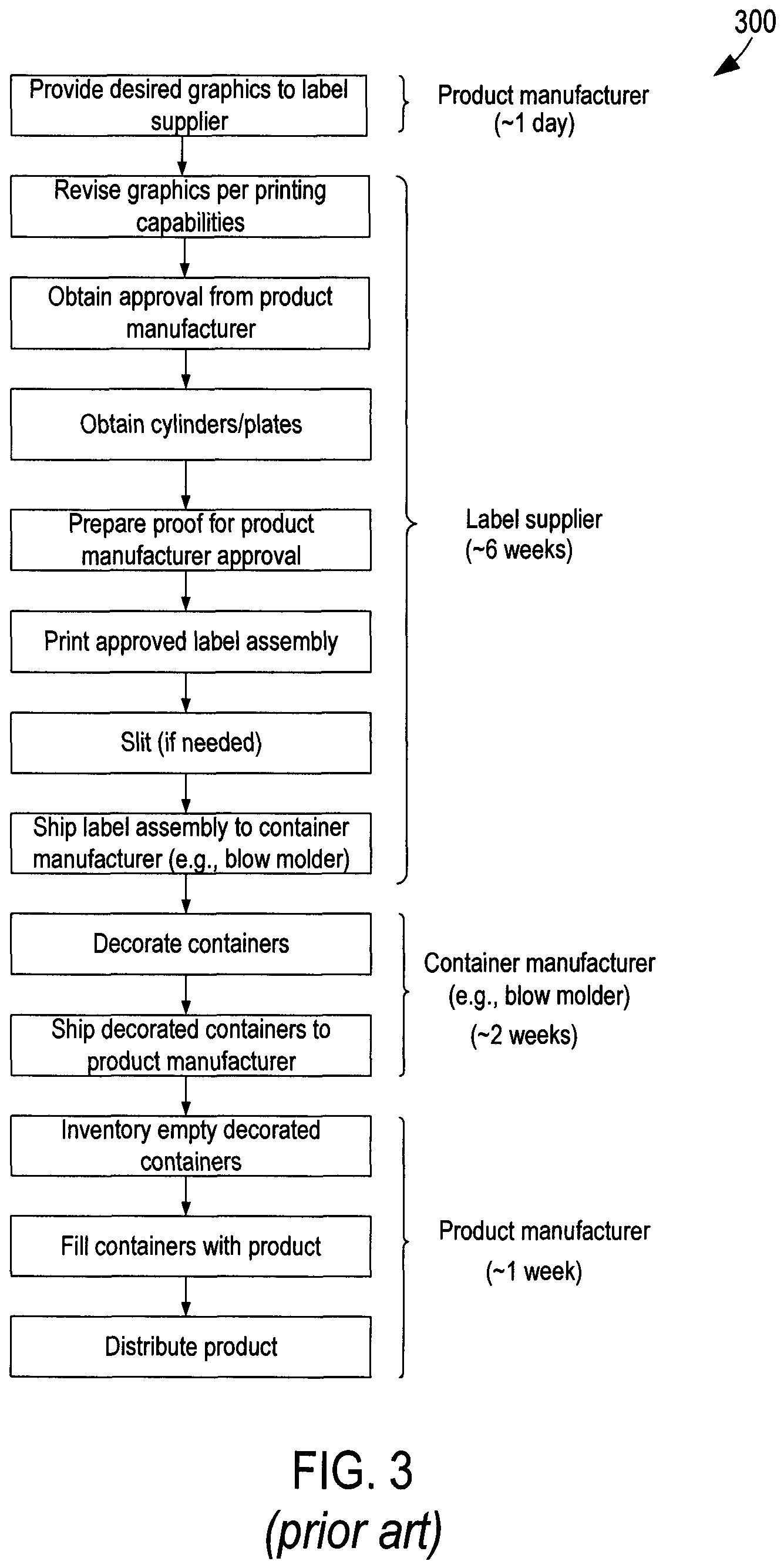 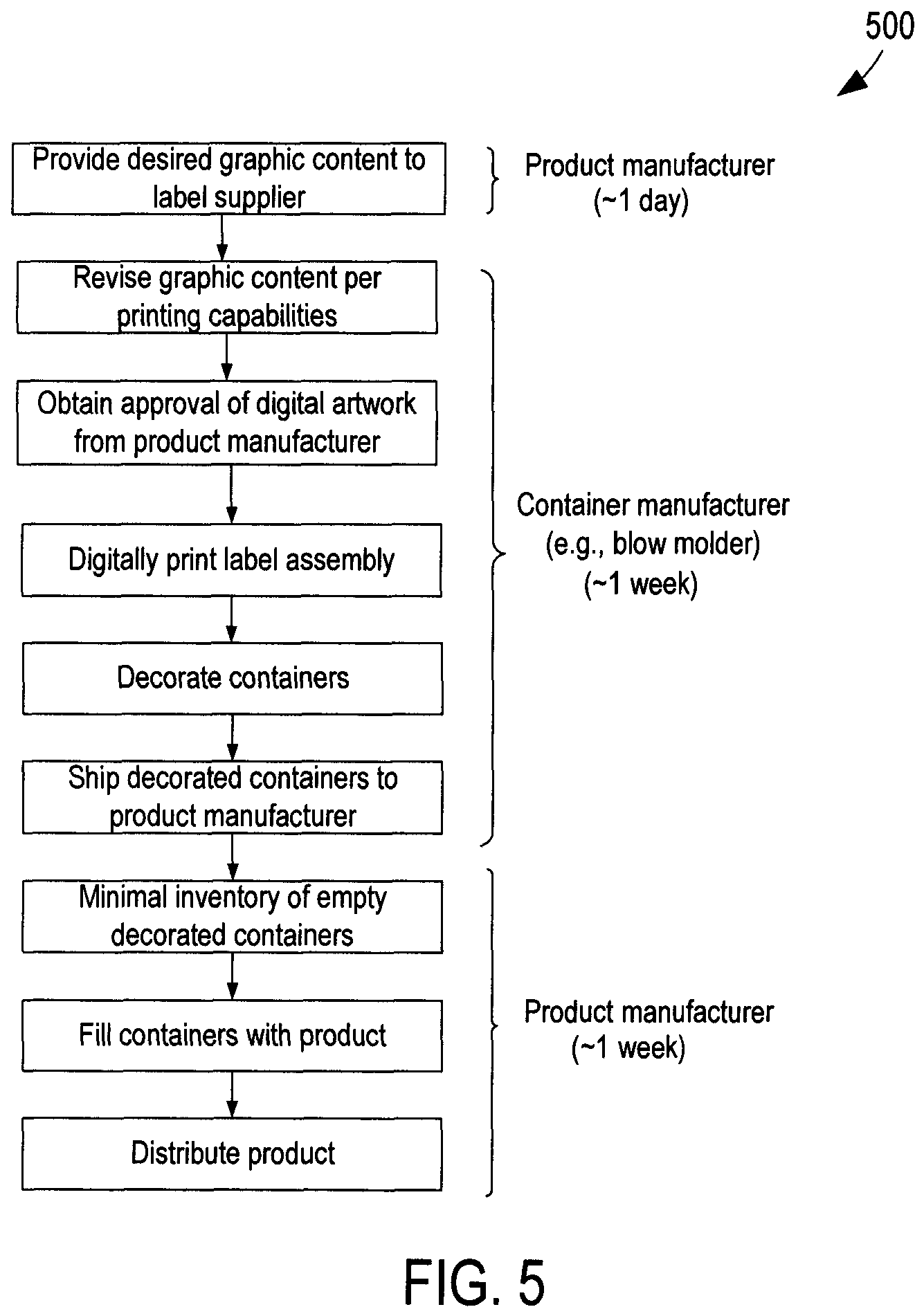 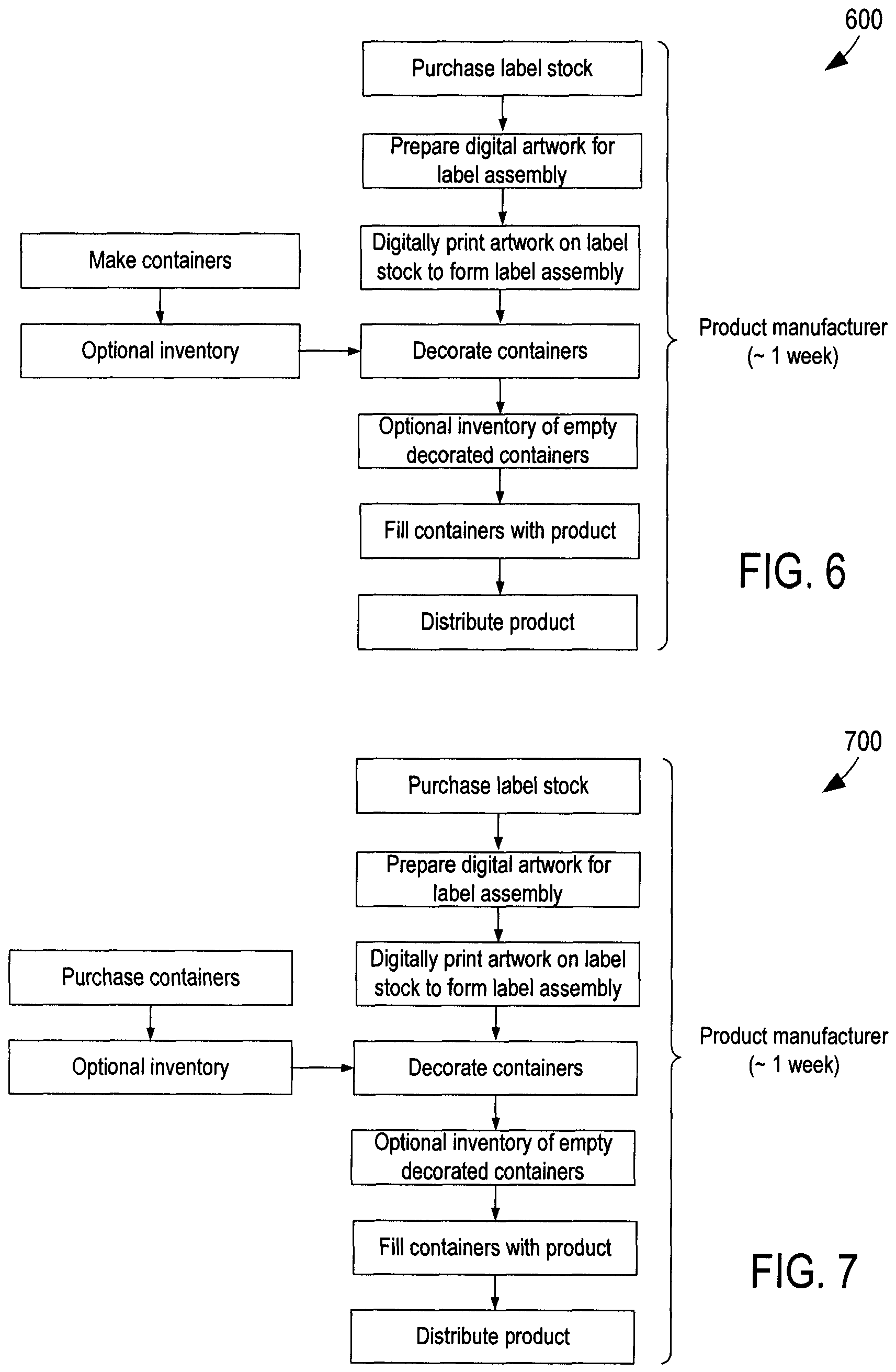