[0001] The present invention, as expressed in the title of this specification, relates to a fast-action harrow-disc coupling, provided for easily and quickly coupling a disc on the corresponding hub in harrows used in farming.
[0002] The object of the invention is to facilitate and perform the operation of coupling or disassembling a disc with respect to the corresponding hub established in the frame of an agricultural harrow, in the shortest time possible.

[0003] Ploughing systems or for agricultural work using harrows, make a cut on the vegetable matter that may be on the surface of the land, achieving a shredded of that vegetable matter that allows leaving the land in optimal conditions, or at least suitable for carrying out the seeding.
[0004] The invention is intended for application in disc harrows, and in particular for carrying out coupling of the disc to the hub corresponding to the frame of the harrow.
[0005] As is known, disc harrows are formed by a plurality of discs with the shape of spherical cap rotating about respective hubs attached to the frame of the harrow, which hubs normally form certain angle with the forward direction, besides being inclined with respect to the horizontal plane that obviously corresponds to the land plane, all so that the land cut by each disc in the rotation thereof exerts pressure against the disc itself and makes it rotate.
[0006] As mentioned in the preceding paragraph, each disc will be related to a corresponding hub, which means that it is necessary to mount one by one the different discs on the corresponding hubs of the frame to form the harrow. Said assembly and/or disassembly operation, is laborious and there is no known system for a quick change of the discs in their hubs.
[0007] Conventionally, the way of centering and coupling each disk to its respective hub is based on the fact that it has a sort of concentric cylindrical neck emerging frontally, which is the means for centering the disc on the hub itself, for which said disc has a hole centrally wherein the neck of the hub is inserted, the disc being thus centered and positioned to finally carry out its coupling or fixation, for which are used several screws passing through a plate of the disc and a flange of the hub on the holes of which the screws are threaded.
[0008] Obviously, the use of several screws for fixing o coupling the disc, entails that the work, both for fixing and disassembly of the disc for its change, is slow and uncomfortable.

[0009] The invention consists of a new way of carrying out the coupling of the discs of an agricultural harrow to respective hubs established for this purpose in the corresponding frame, allowing simplifying the operation, making it more comfortable and drastically reducing the time spent on it.
[0010] In this regard, the coupling of the invention is based on that the hub has solidly connected to it a planet wheel, either forming a single-piece body with the hub itself or fixing to it by means of screws or other fixing system, such as a riveted joint, a welded joint or a threaded joint between the planet wheel and hub, so that the front face of said planet wheel has centrally a frustoconical projection having a polygonal base, from the center of which a section of the threaded shank emerges, so that the disc will have a hole complementary to the base of the frustoconical projection for it to pass through said hole, the final fixation being carried out by a nut that will thread on said shank of the projection, with the interposition of a plate external to the disc and provided with a cavity of location of the frustoconical projection, in which plate a hole has been provided so that the end of the shank can emerge to the front or external face of the plate and be able to carry out the threading of the nut, thus establishing the fixing or coupling of the disc to the hub, with the tightening of a single threadable nut on the only shank or screw emerging from the projection of the hub, which projection on the other hand shall constitute the centering element for the disc in its assembly on the hub.
[0011] Therefore, by the proposed solution of coupling of a harrow disc to the respective hub, we have switched from using a plurality of screws to carry out the coupling or fixing, as traditionally, to the use of a single nut, which of course means greater speed in the operation of change of the disc or discs of the harrow, as well as greater convenience and ultimately a minimal loss of time in carrying out the operation.

[0012] To complement the description that will be carried out in the following and in order to help better understand the features of the invention, a set of drawings is attached to the present specification based on which the innovations and benefits of the coupling of a disc to the hub of a harrow, all of it performed in accordance with the object of the invention.

Figure 1.- Shows a perspective exploded view of the different elements and/or components involved in the coupling of a disc to the hub of the frame of an agricultural harrow performed in accordance with the object of the invention.

Figure 2.- Shows a sectional view along a diametral plane of the materialization of the coupling of the invention, fixing a disc to the respective hub.

[0013] As it can be seen in the mentioned figures, the coupling of the invention is intended to fix the disc 1 of an agricultural harrow to the respective hub 2 established in the corresponding frame of the harrow, for which it has been anticipated that solidly connected to that hub 2 forming a single-piece body with the same or fixed by means of screws 3 as shown in figure 1, a planet wheel 4 is included, that at its outer face has a central and frustoconical projection 5 having a polygonal base and provided on its outside and centrally with a section of the threaded shank 6, while the disc 1 has centrally a hole 7 for positioning of the projection 5, specifically the polygonal base of it in that hole 7 which is also polygonal, thus establishing the centering means of the disc 1 itself with respect to the hub 2, with the special feature that in the disc 1 a concentric housing 8 has been envisaged, at the bottom of which the hole 7 itself is made and in which housing 8 a plate 9 provided with a back cavity 10 is positioned, wherein the frustoconical projection 5 of the planet wheel 4 belonging to the hub 2 is positioned, introducing the section of the threaded shank 6 through a hole 11 provided in the center of the plate 9, so that by a nut 12 the corresponding fixing of the disc 1 to the hub 2 is carried out.
[0014] Therefore, assembly and disassembly of the disc 1 with respect to the hub 2 is performed quickly, easily and comfortably, since it is enough to screw or unscrew a nut 12 on a threaded section of the shank 6, avoiding the manipulation of different screws conventionally required for fixing the discs to agricultural harrow hubs. 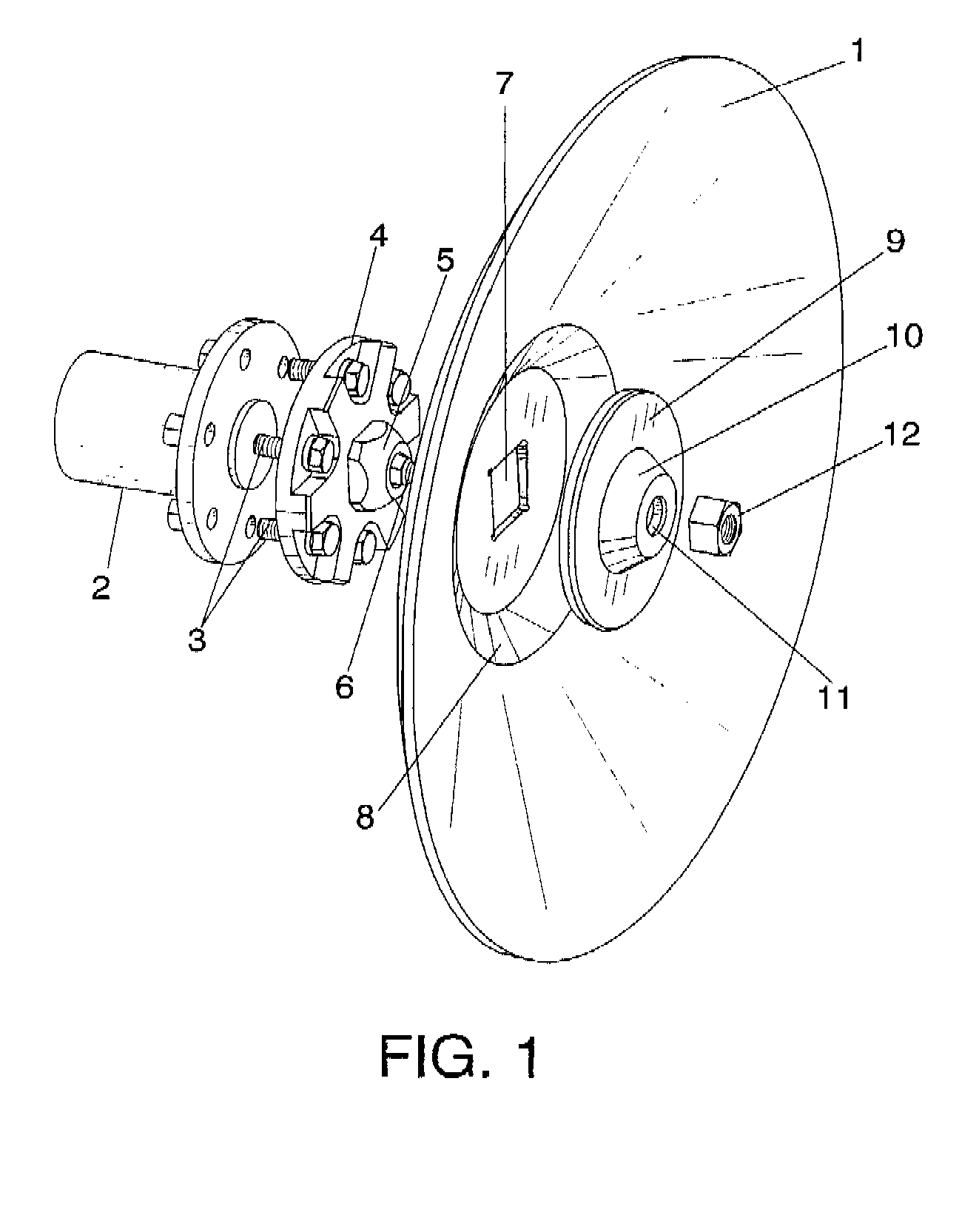 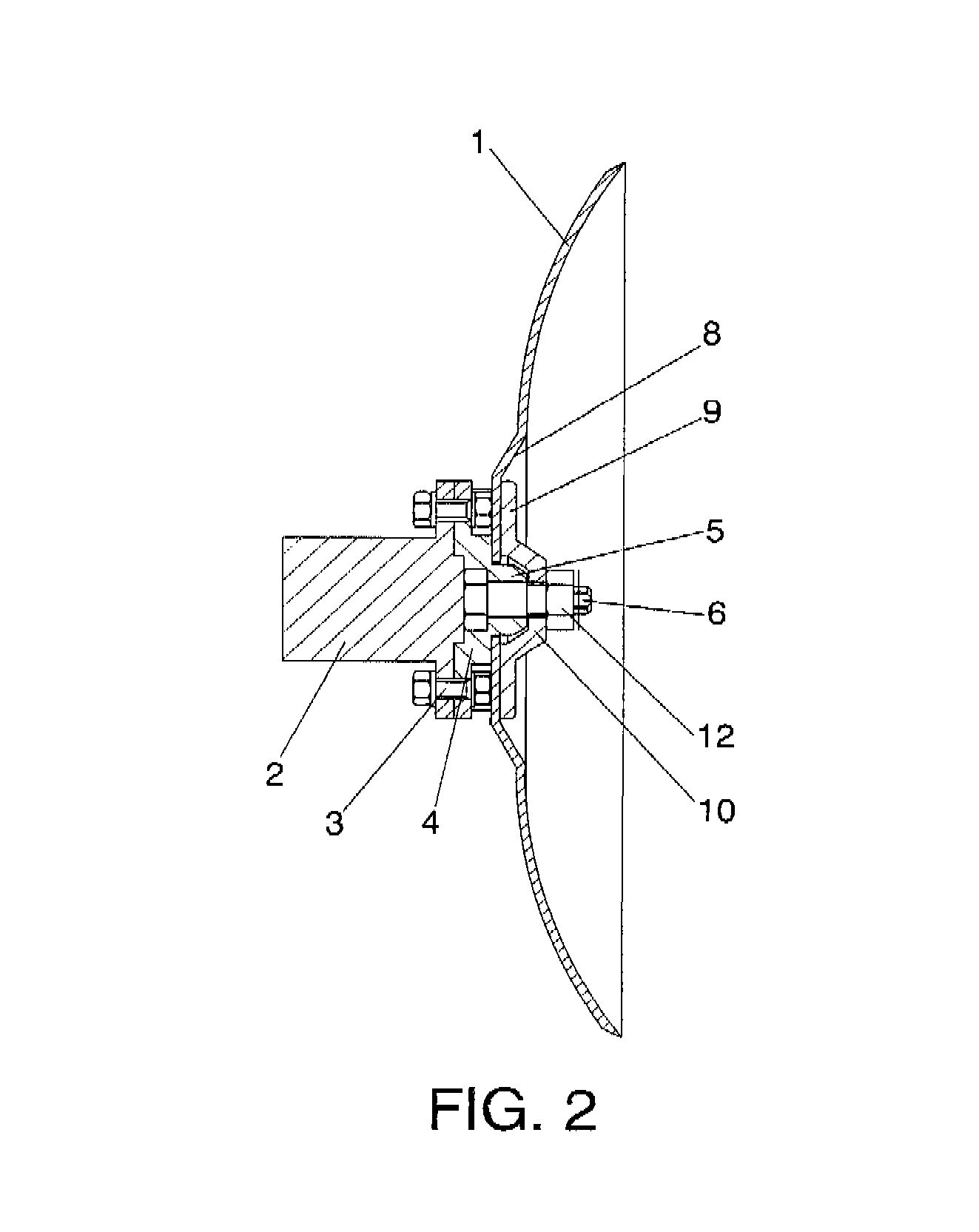 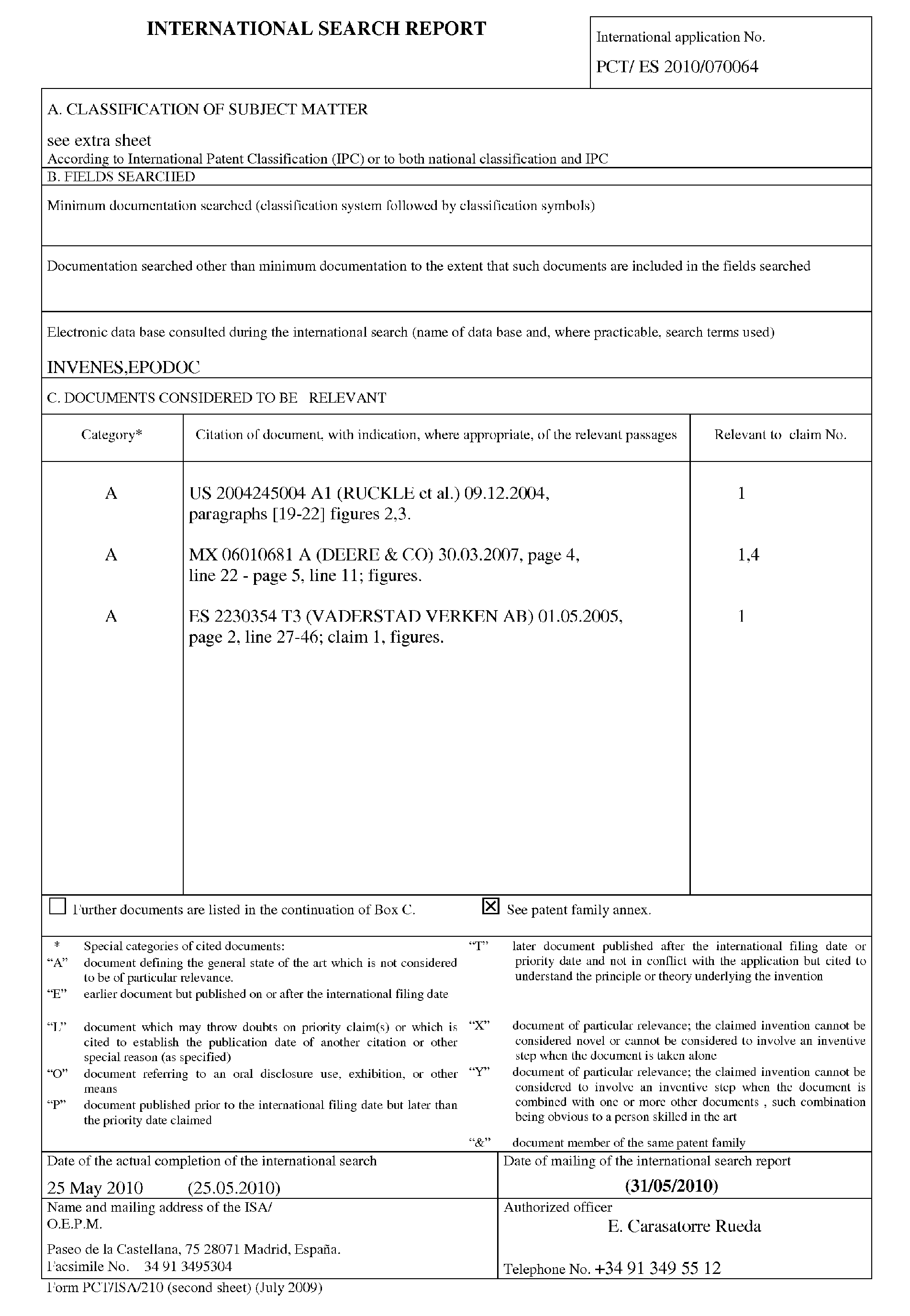 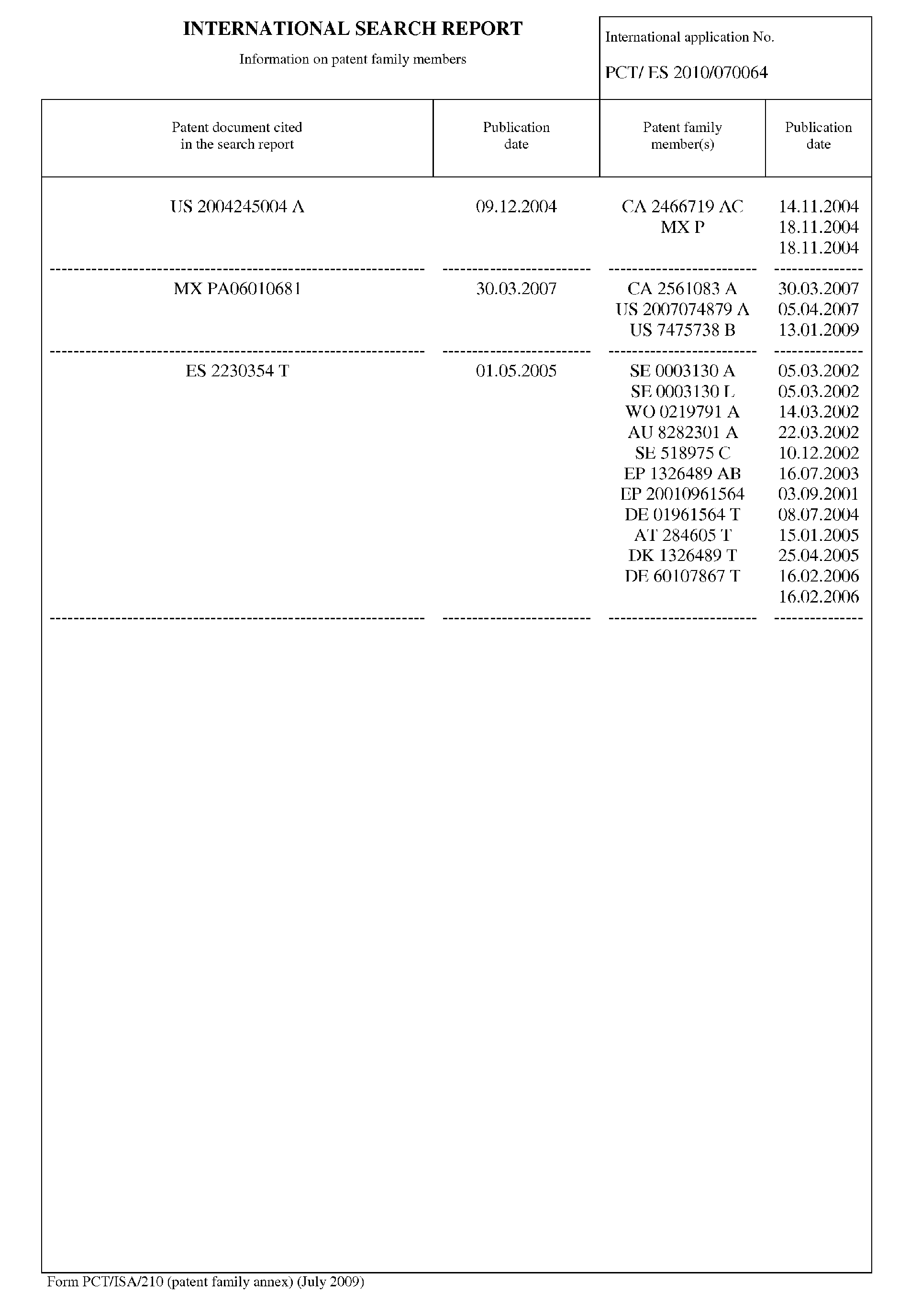 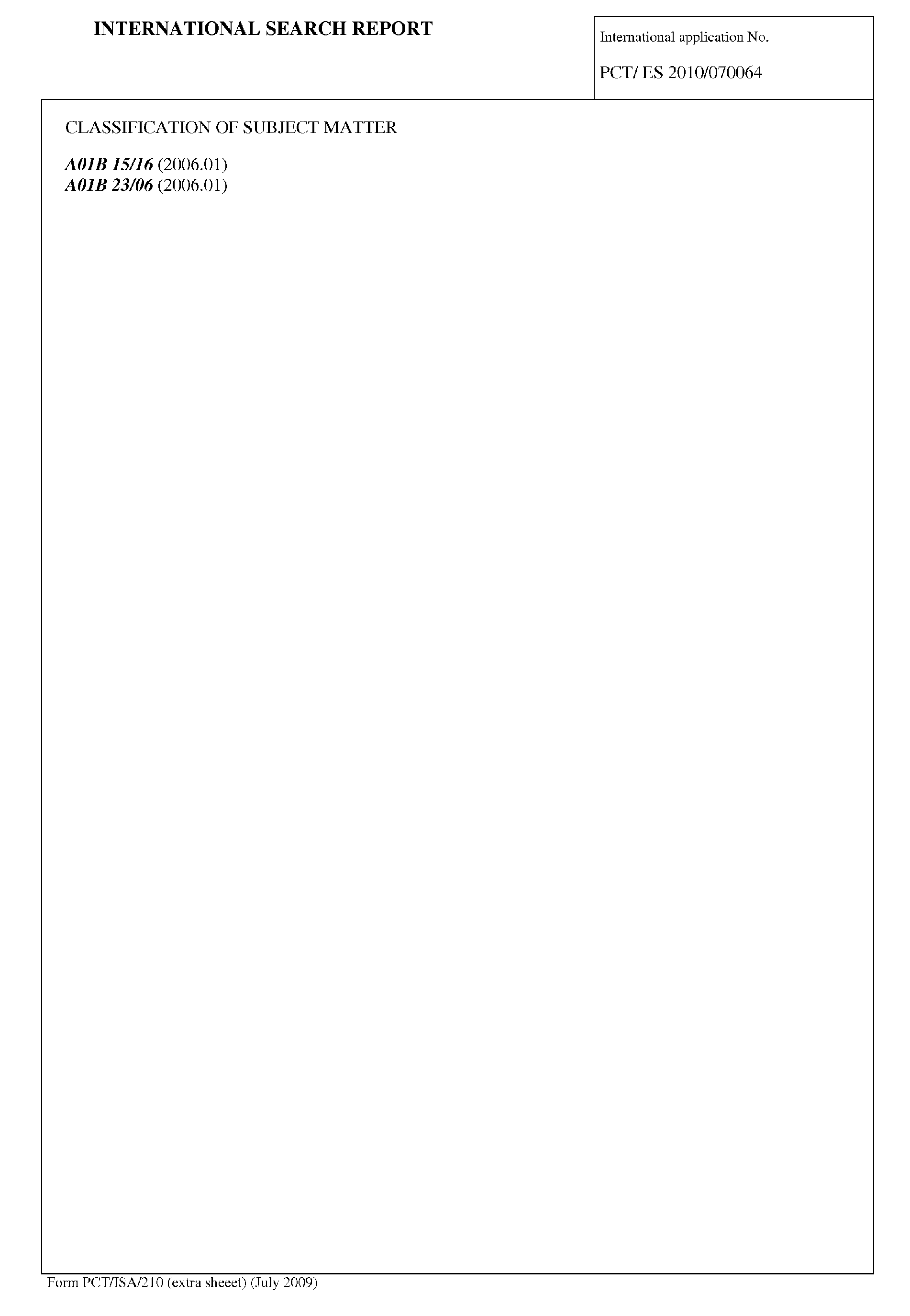