[0002] There is a need, especially in the automotive industry, for a pipe coupling for connecting two pipes together in a vehicle engine exhaust system. For example, it is becoming common practice in the repair or servicing of an automobile exhaust system to replace the muffler by cutting the pipe between the muffler and the catalytic converter and attaching a new muffler by use of a special coupling which is herein referred to as a coupler. In this example of use, the coupler must be capable of joining two pipes in a butt joint with a good seal against exhaust gas leakage and which has high pull-apart strength. The use of a butt joint has the advantage of avoiding the need for slotted pipe ends as are commonly used in tail pipe-to-muffler lap joints.
[0003] In the prior art, attempts have been made to provide a pipe coupling which would meet the requirements of mechanical strength, exhaust gas sealing properties and long service life required by the automotive industry. However, the prior art leaves much to be desired with respect to the present day requirements.
[0004] U.S. Patent No. 2,227,551 granted January 7, 1941 to Morris describes a pipe coupling which comprises a cylindrical metal sleeve and gasket disposed between a clamping shell and the pipes to be coupled together. The metal sleeve is open with confronting ends which have complementary tongues and recesses which come together when the coupling is tightened.
[0005] U.S. Patent No. 4,056,273 granted November 1, 1977 to Cassel describes a coupling for pipe lap joints which includes a seal ring disposed about the end of the smaller diameter pipe and abutted against the end of the larger diameter pipe. A clamping device has a clamp band which encircles and overlaps the end of the larger diameter pipe and the seal ring. The seal ring includes opposite circumferential ends interengaged with each other, at least one of the seal ring ends having a ramp surface that engages the other seal ring end to move the rings axially relative to each other during clamping of the ring over the inner pipe to thereby provide sealing of the ring between the ring ends.
[0006] FR-A-2689204 discloses a pipe coupler having the features specified in the pre-characterising portion of claim 1. A relief slot is provided as an opening defined within a closed contour of the tongue.
[0007] A general object of this invention is to provide an improved coupler which overcomes certain disadvantages of the prior art.

[0008] In accordance with this invention, a coupler is provided for joining a pair of pipes in a butt joint which provides a good seal against fluid leakage and exhibits high pull-apart strength. This is accomplished by providing an improved sealing sleeve in a band clamp which is capable of applying a high clamping load. Further, the invention is especially adapted for use in a coupler for application in vehicle engine exhaust systems.
[0009] Further, in accordance with this invention, an improved coupler is provided which is adapted for high volume production at low cost, is easy to install and exhibits a good gas seal against leakage with high pull-apart strength and has a long service life.
[0010] Further, in accordance with this invention, an improved sealing sleeve for a pipe coupler is provided which is constructed of steel with tongue and groove sealing joints which are characterized by an interference fit of side edges with spring members.
[0011] A complete understanding of this invention will be obtained from the detailed description that follows taken with the accompanying drawings.

Figure 1 is a perspective view of an embodiment of the present invention;

Figure 2 is a cross-sectional view of the coupling of Figure 1 installed on the abutted ends of two pipes;

Figure 3 is a plan view of a split sealing sleeve used in an embodiment of the invention; and

Figure 4 is a fragmentary view of a split sealing sleeve of the same embodiment of the invention showing the tongue and groove sealing joint in sealing engagement. 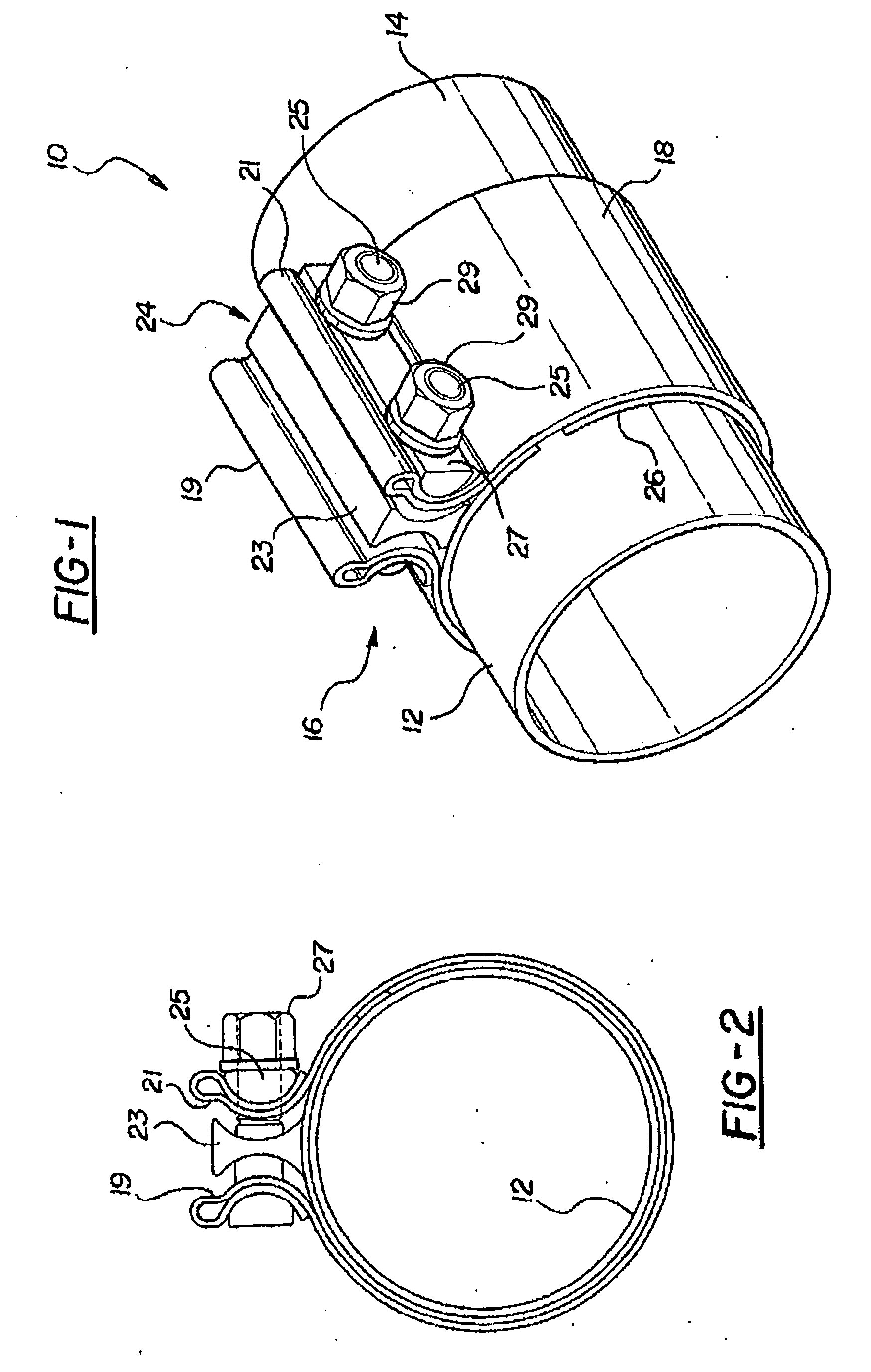 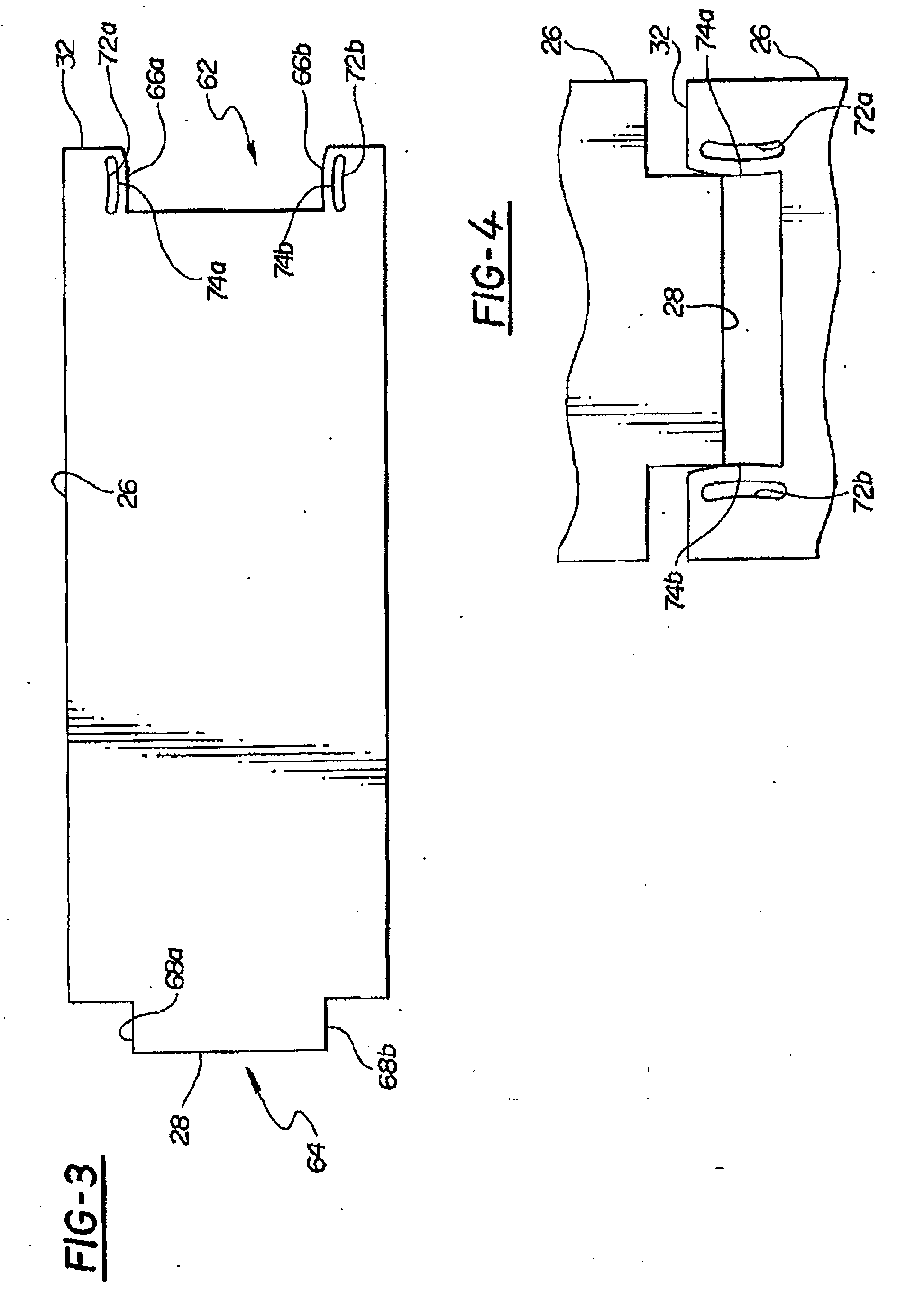