[0001] This invention concerns a co-crystal of etravirine (TMC125) and nicotinamide, its preparation and use in the treatment of HIV infection.

[0030] The free base of TMC125 (10.0 g) was dissolved with nicotinamide (3.0 g) in chloroform (900 mL). This mixture was gently heated at 60 °C for 1 minute to dissolve the remaining solid. Once complete dissolution was observed, the solution was allowed to cool back to room temperature during which the co-crystal precipitated from solution. Once equilibrated at room temperature, N2 gas was gently blown into the flask to reduce the volume of the solution to 100 ml. The product was collected by vacuum filtration at room temperature and allowed to dry.

[0042] This dissolution experiment was focused on looking at the difference between the cocrystal and TMC125 free base both neat and mixed with HPMC E5 Cps.
[0043] The loadings were:
[0044] Powders were dispensed to 20 mL vials and in 20 mL of 10 mM HCl with 1% TPGS (d-alpha-tocopheryl polyethylene glycol 1000 succinate) was added to each vial. Each vial was stirred at 500 rpm via stir bar at 37 °C and 500 µL aliquots were taken at 5, 10, 20, 40, and 60 minutes, filtered through a 0.45 µm nylon filter via centrifugation and the solute was diluted in half and analyzed by HPLC for the concentration of TMC125.
[0045] The results are listed in the following table.

[0046]
[0047] The above mentioned ingredients are mixed and processed into tablets using standard methodologies.

1. Co-crystal of etravirine and nicotinamide.

2. The co-crystal of claim 1, wherein the etravirine and nicotinamide are present in a 1 : 1 molar ratio.

3. A process for preparing the co-crystal of claims 1 or 2, said process comprising dissolving etravirine and nicotinamide in a solvent wherein the solvent is a halogenated hydrocarbon or a dipolar, aprotic solvent, if desired by warming the mixture to complete dissolution; removing the solvent, to provoke crystallization, by evaporation; and allowing the mixture to cool to room temperature whereupon the co-crystal precipitates.

4. The process of claim 3, wherein etravirine is dissolved in the solvent whereupon nicotinamide is added; the whole is warmed until complete dissolution; solvent is removed by evaporation by a stream of inert gas while allowing the mixture to cool to room temperature; the co-crystal that is formed is filtered off and optionally washed and dried.

5. The process of claim 3 wherein the solvent is chloroform.

6. The process of claims 3 or 4, wherein the solvent is removed by introducing a stream of inert gas.

7. A pharmaceutical composition comprising an anti-HIV effective amount of the etravirine and nicotinamide co-crystal defined in claims 1 or claim 2, and a carrier.

8. A combination comprising the etravirine and nicotinamide co-crystal as defined in claim 1 or claim 2, and one or more dissolution improving ingredients selected from hydroxypropyl methylcellulose (HPMC), hydroxypropylmethylcellulose phthalate (HPMCP), polyvinylpyrrolidone (PVP), a copolymer of vinylpyrrolidone and vinyl acetate (PVPcoVA), and nicotinamide, including mixtures thereof.

9. The combination of claim 8 wherein the weight/weight ratio between the etravirine and nicotinamide co-crystal and the total amount of the one or more dissolution improving ingredients is 1 : 1.

10. The combination of claim 8 or claim 9 wherein the one or more dissolution improving ingredients are selected from HPMC, PVP and nicotinamide.

11. The combination of any of claims 8 to 10, wherein the combination comprises the etravirine and nicotinamide co-crystal as defined in claim 1 or claim 2, and the dissolution improving ingredients PVP, nicotinamide and HPMC, in a 1 : 1 : 1 : ½ weight/weight ratio.

13. A pharmaceutical composition comprising the combination of any of claims 8-11 and a carrier.

15. The co-crystal of claim 1 or claim 2 for use as a HIV-inhibitory medicine. 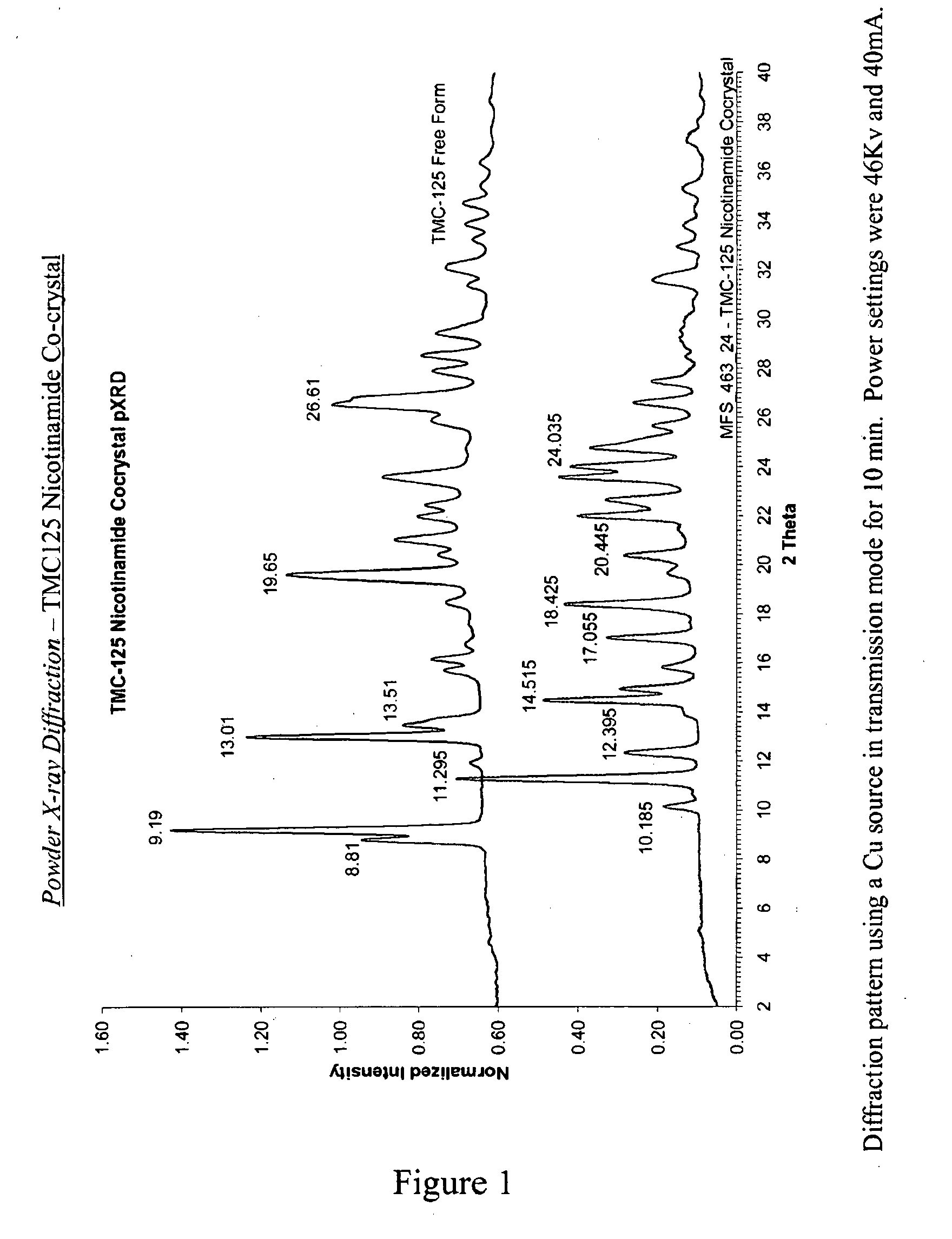 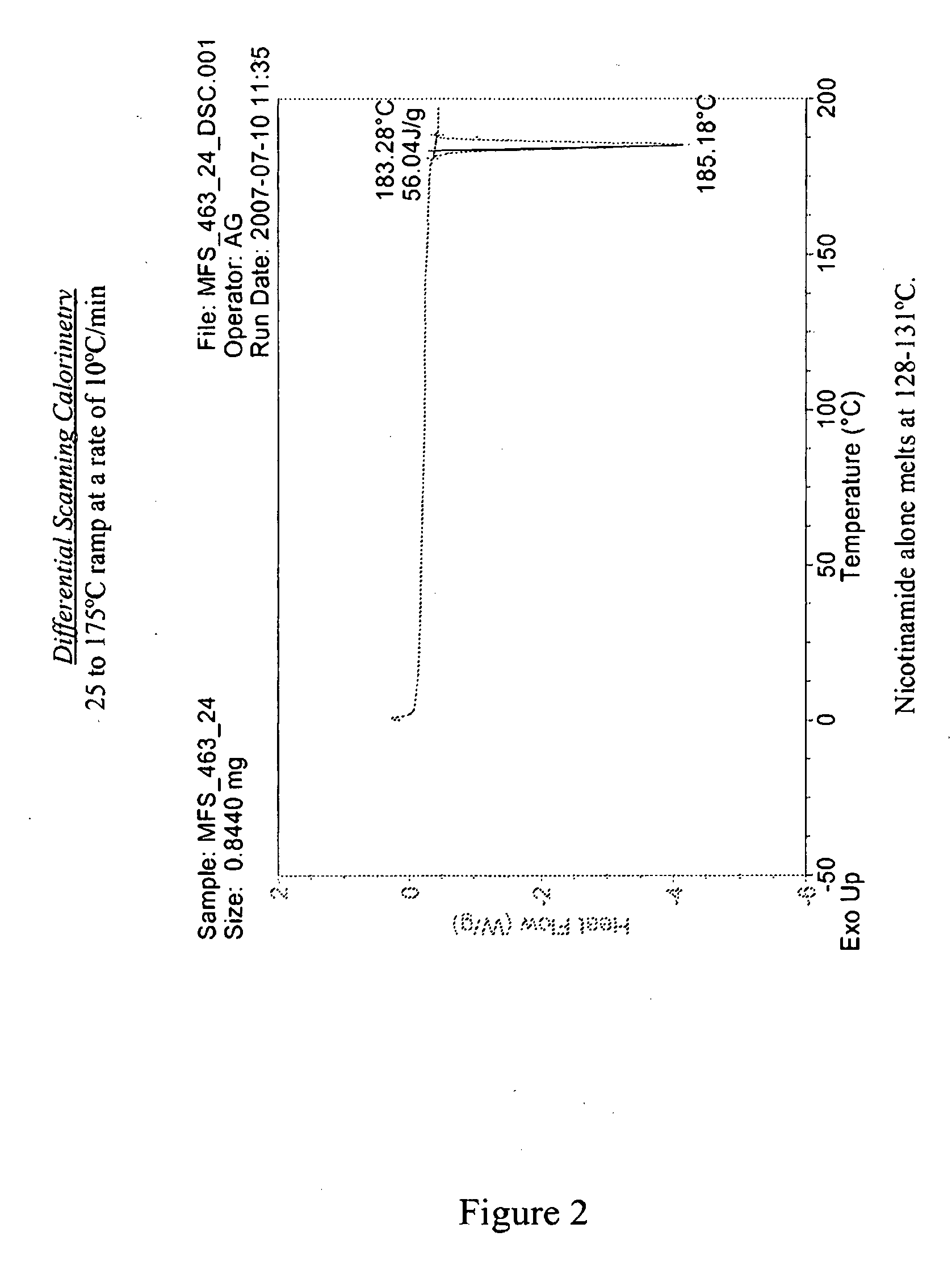 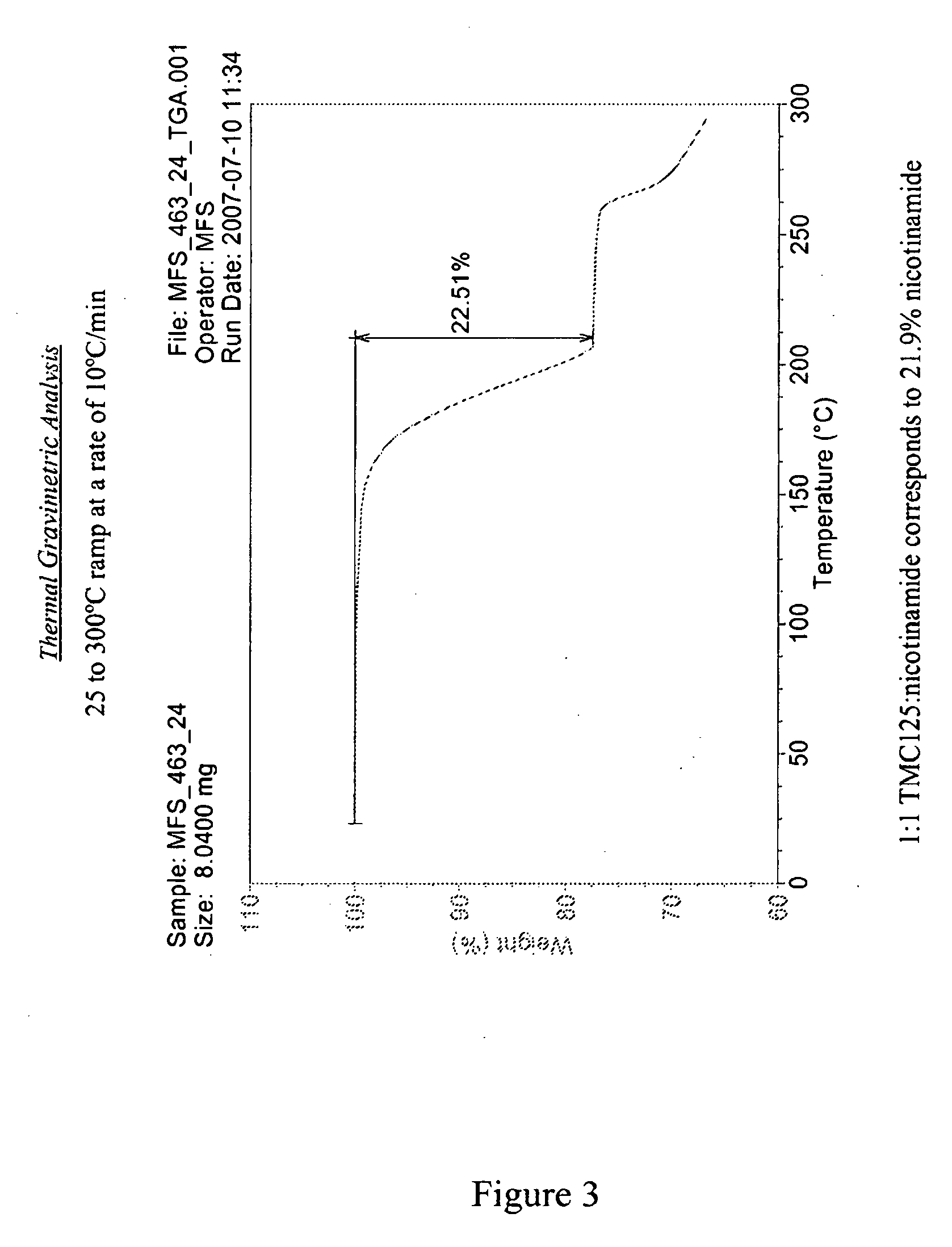 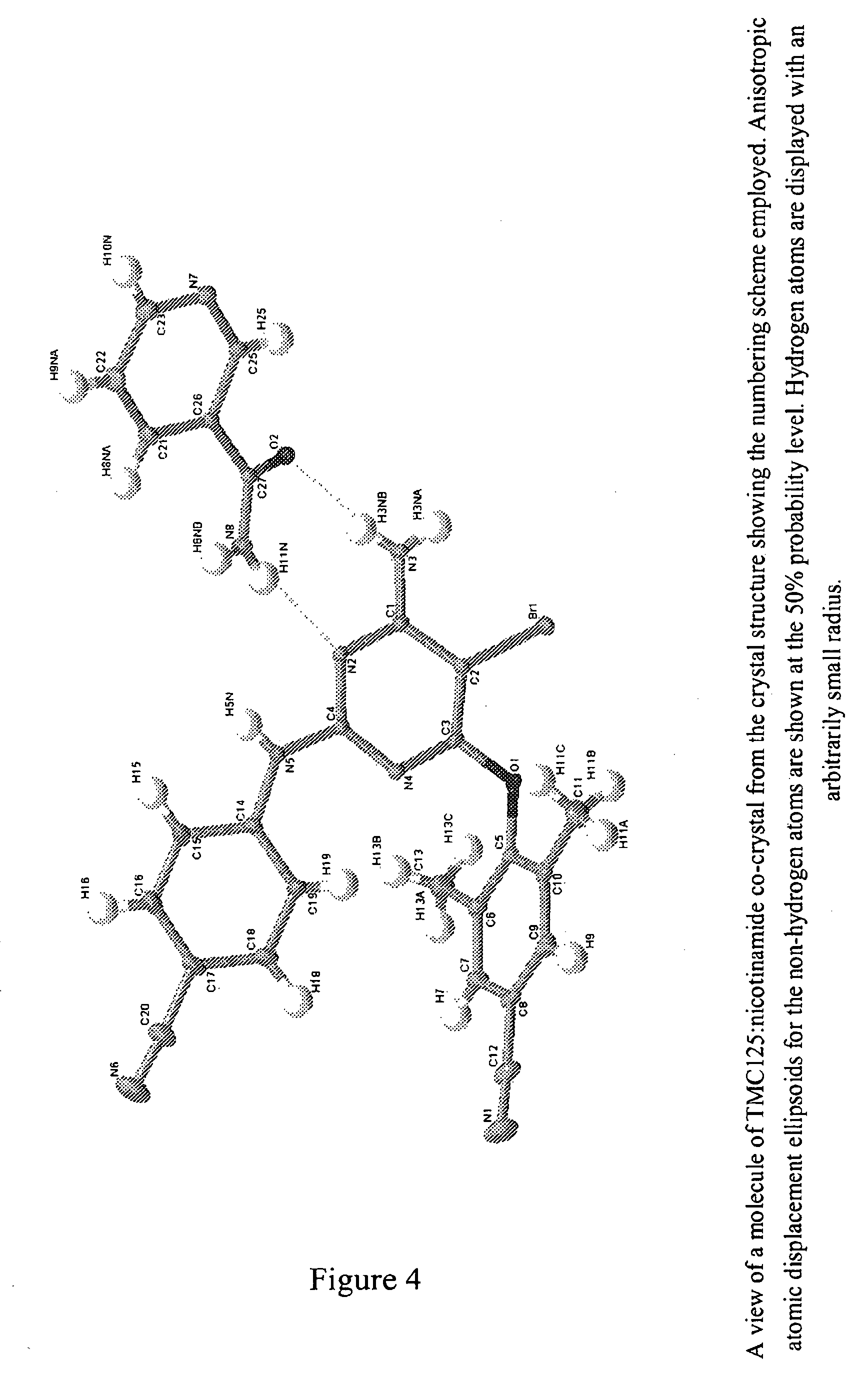 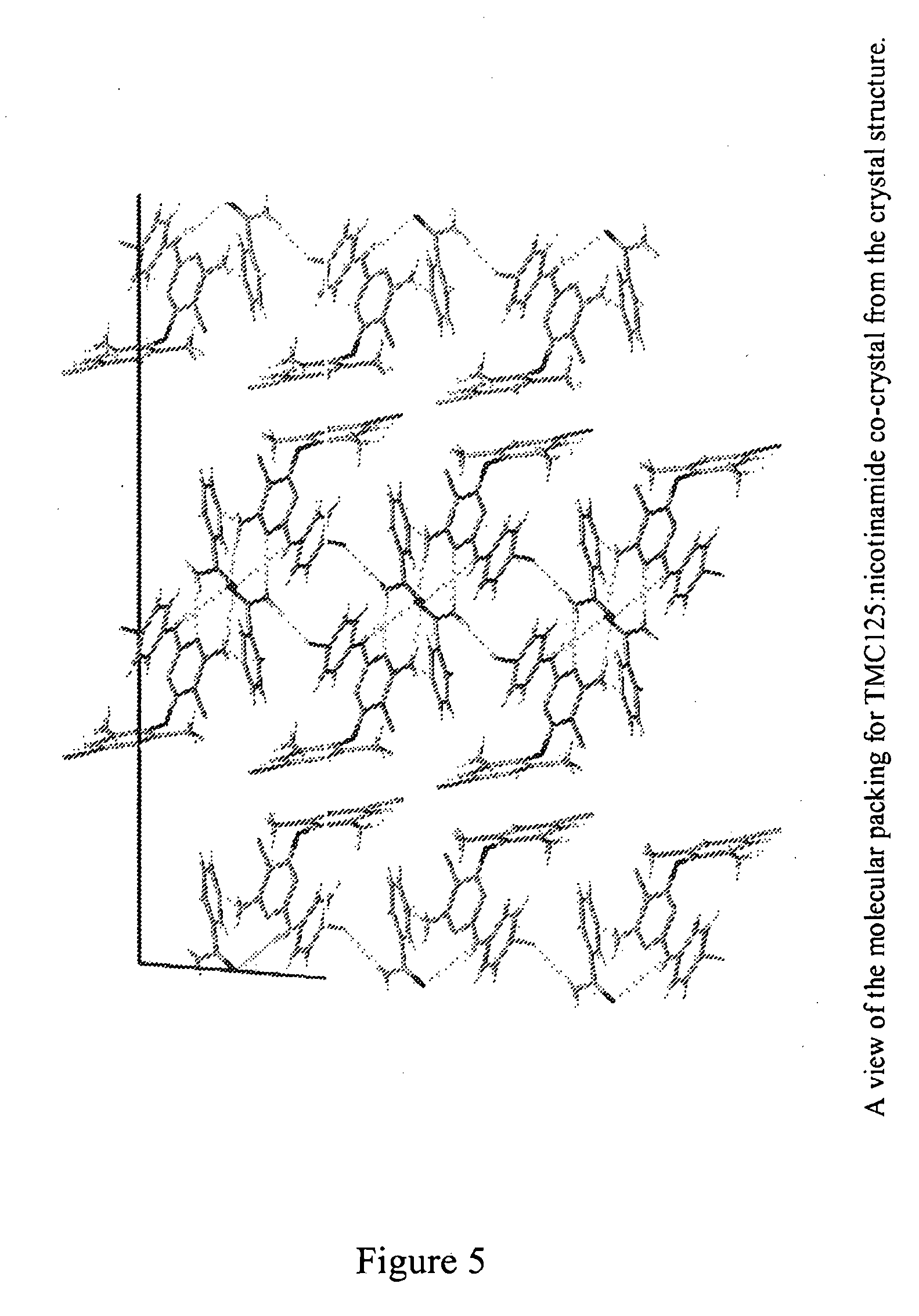 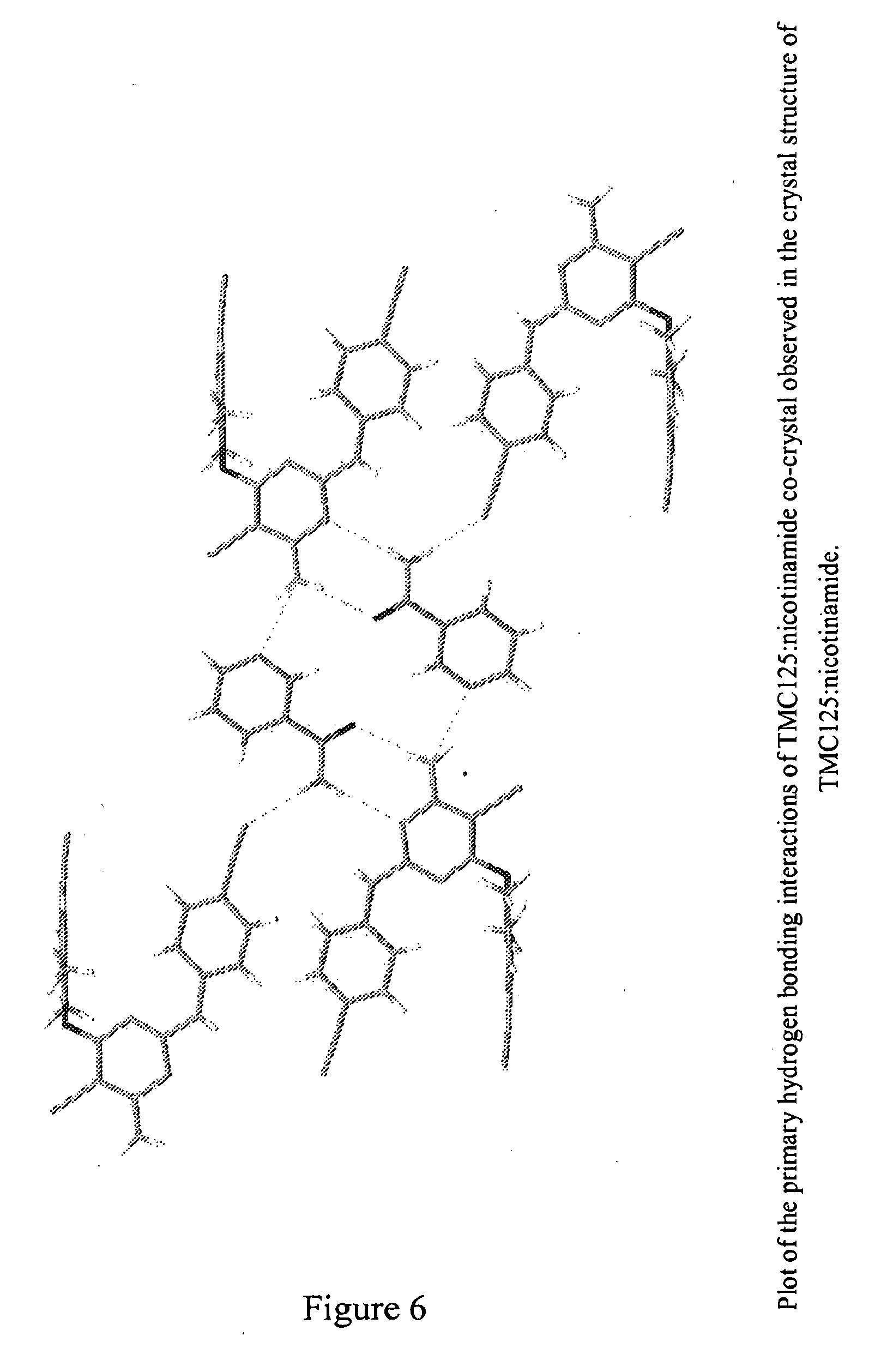 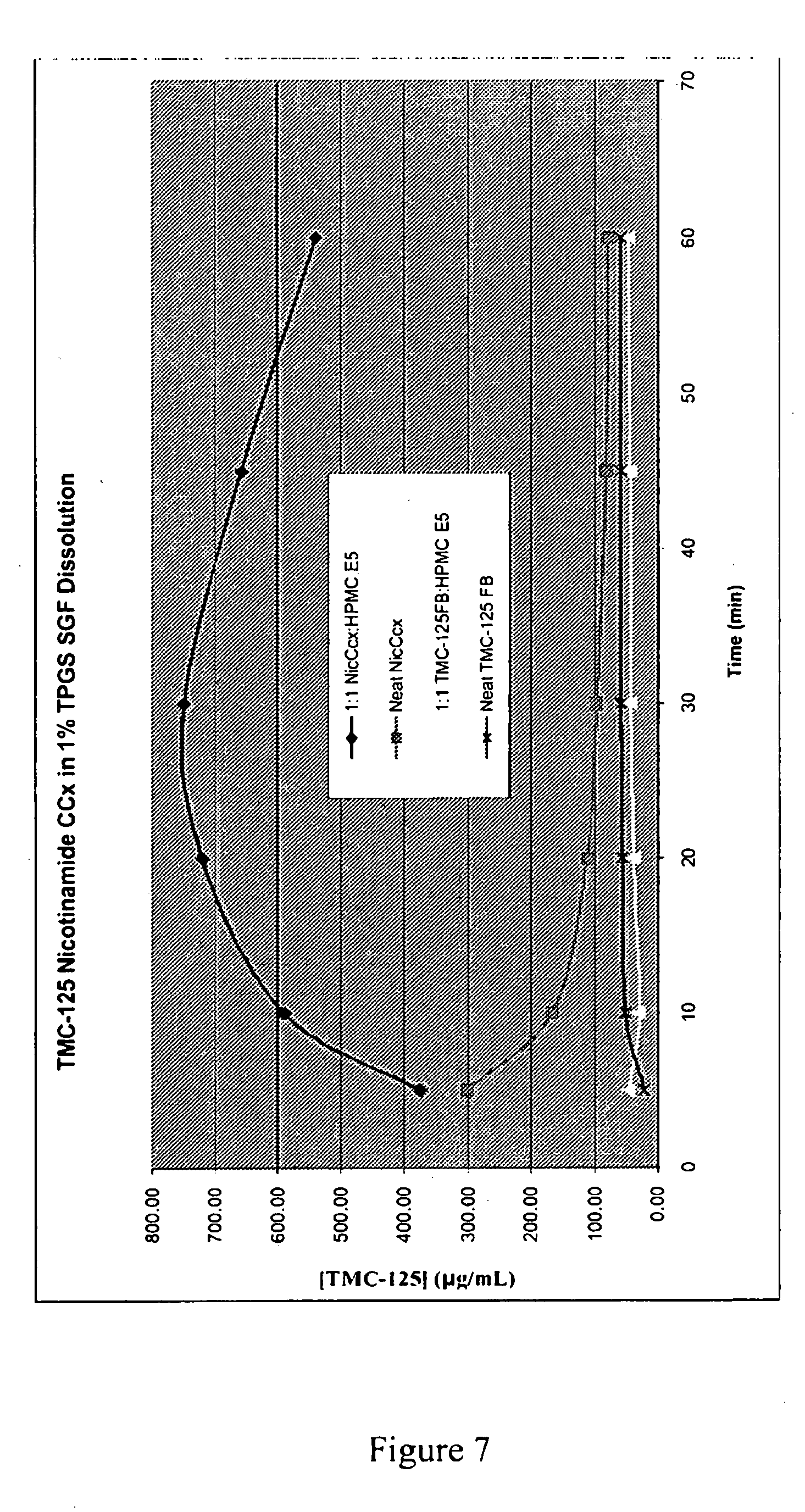