[0001] This invention relates to the treatment of sickle cell anemia, using blockers of NMDA.

[0002] The N-methyl D-aspartate receptor (NMDAR) is an ionotropic receptor for glutamate. Blockers of NMDAR have been used as anesthesia and for treatment of traumatic brain injury, stroke, and neurodegenerative diseases such as Alzheimer's, Parkinson's, and Huntington's.
[0003] This invention focuses on the treatment of sickle cell anemia, a genetic disease characterized by red blood cells that assume an abnormal, rigid, sickle shape. Acute complications of Sickle cell anemia are treated symptomatically with analgesics and transfusions. A prophylactic treatment of sickle cell crisis is long term application of hydroxyurea. Further treatment options are very desirable.
[0004] Ketamine, which is a known NMDAR antagonist, has been proposed as a low-dose addition to opiates for the treatment of vasoocclusive pain in pediatric patients suffering from sickle cell disease (Zempsky W. et al., Journal of Pain, Vol. 9, No. 4, 1 April 2008, p. 75).
[0005] Wong EHF et al., Proceedings of the National Academy of Sciences of the United States of America, Vol. 83, No. 18, 1986, pp. 7104 - 7108, discloses a method for identifying an NMDA antagonist, as shown for the example of the anticonvulsant compound MK-801.

[0006] The present invention relates to blockers of the NMDAR for use in preventing irreversible shrinkage of erythrocytes of patients with sickle cell anemia.

[0007] Ketamine, which is a known NMDAR antagonist, has been proposed as a low-dose addition to opiates for the treatment of vasoocclusive pain in pediatric patients suffering from sickle cell disease (Zempsky W. et al., Journal of Pain, Vol. 9, No. 4, 1 April 2008, p. 75).
[0008] Wong EHF et al., Proceedings of the National Academy of Sciences of the United States of America, Vol. 83, No. 18, 1986, pp. 7104 - 7108, discloses a method for identifying an NMDA antagonist, as shown for the example of the anticonvulsant compound MK-801.

[0009] The present invention relates to blockers of the NMDAR for use in preventing irreversible shrinkage of erythrocytes of patients with sickle cell anemia.

Fig. 1:
Samples 1-3 are from three patients with sickle cell anemia. Shown is the specific staining against the NR1 subunit of the NMDA receptor (NRX) and the loading control (LC) of the light (L), middle (M) and high density (H) sub-populations of erythrocytes.
Fig. 2:
Potassium and calcium fluxes through the NMDA receptor in erythrocytes of healthy donors (C) and patients with sickle cell anemia (H). A: Unidirectional K+ influx measured in chloride-free Na-methane sulfate medium in the presence of 100 µM ouabain, the inhibitor of Na,K-ATPase. Conditions corresponding to the numbers at the X axis: (1) control; (2) 50 µM memantine chloride (Sigma-Aldridge); (3) 100 µM NMDA; (4) NMDA + memantine chloride; (5) 2 µM prostaglandine E2 (PGE2); (6) PGE2 + memantine chloride. * denotes p<0.05 compared to the corresponding values in healthy donor's erythrocytes, # stands for p<0.05 compared to the corresponding non-treated control. Data are means ± SEM for 6-7 individuals. B: Unidirectional Ca2+ influx in erythrocytes of a single HbSS patient measured on 3 different occasions and in three healthy donors. Conditions indicated in numbers at the X axis are: (1) non-treated control; (2) 100 µM NMDA; (3) 100 µM NMDA and 50 µM MK-801. * denotes p<0.05 compared to the corresponding health donors' samples.
Fig. 3:
The examples of morphological changes in erythrocytes caused by agonists and antagonists of the NMDA receptor depending on the receptor availability and HbSS presence. Sample 1 is a sample from a sickle cell patient, sample 2 is from a person with high levels of NMDA receptors and reticulocytosis and sample 3 is from a person with low levels of receptors. Treatment 1 denotes administration of 50 µM memantine (sample 2) or MK-801 (sample 3), treatment 2 stands for 1 mM NMDA addition, treatment 2 shows morphological changes in the cells pre-treated with memantine/MK-801 and then exposed to 1 mM NMDA.

Concepts and evidence behind the invention

[0030] In vitro studies showed that erythrocytes of patients with sickle cell anemia contain more NMDA receptor than that of healthy donors and that these receptors are predominantly retained in the cell fraction prone or already undergoing sickling (uncontrolled irreversible shrinkage). This cell population looses cell water and K+ due to the high permeability of the cell membrane to Ca2+ mediated by the NMDA receptor. This leads to the conclusion that blocking the NMDA receptor may prevent irreversible shrinkage of erythrocytes of patients with sickle cell anemia.

[0032] Localization of the NMDA receptors in erythrocytes of patients and healthy subjects was studied using immunoblotting (Fig 1) and in cells treated with a selective irreversible blocker of the NMDA receptor 3H-MK-801. The number of the MK-801 binding sites per erythrocyte was assessed in sub-populations of cells with different densities (potential age groups). To do so the erythrocyte suspensions in the medium containing (mM) 145 NaCl, 4KCI, 1CaCl2, 0.15 MgCl2, 10 sucrose, 10 glucose, 10 Tris-HCl (pH 7.4) were incubated at room temperature for 30 min in the presence of 3H-MK-801. Thereafter the cells were washed from external radioactivity and separated on the Percoll density gradient (see Lutz et al., Biochim Biophys Acta 1992 Mar 5;1116(1):1-10). Cell sub-populations of different densities were then isolated, washed and lysed with distilled water. Membranes were then collected by centrifugation, dissolved in the scintillation fluid (Quicksafe A, Zinsser Analytic) and the amount of 3H-MK-801 assessed by beta counter and normalized to the amount of cells. Receptors were equally distributed between reticulocytes and young cells (8±1 receptors per cell), mature cells (8±3) dense senescent cell population (7±2). In patients with HbSS the number of receptor copies per cell was higher in all cell populations (50±2, 17±5 and 19±10 receptors per cell in young, mature and senescent sub-populations respectively). When blocker-free the young cells were the first to undergo sickling and shrinkage as the receptor is predominantly present in the dense population (cells prone to sickling).

[0033] Fluxes via the nonselective cation channel of the NMDA receptor were assessed using radioactive tracer kinetics. 86Rb was used as a radioactive tracer for K+ and 45Ca as a tracer for Ca2+. Fluxes through the red cell membrane were measures in the medium containing (mM) 145 Na-methane sulfate, 4 K-gluconate, 1 Ca-gluconate, 10 sucrose, 10 glucose and 10 HEPES-Tris (pH 7.4) in the presence of 100 µM L-arginine and 100 µM ouabain. Details of the flux measurement may be found elsewhere (e.g. Bogdanova et al., J Membr Biol. 2003;195(1):33-42). Erythrocytes of the HbSS patients showed higher passive K+ and Ca2+ fluxes that may be blocked by MK-801 (50 µM) or the reversible inhibitor of the NMDA receptor used in treatment of Alzheimer disease, memantine (50 µM). Fluxes of both cations are further stimulated by NMDA (100 µM) or prostaglandine E2 (2 µM). Both NMDA- and PGE2-sensitive increase in fluxes could be blocked by MK-801 or memantine. Fluxes through the NMDA receptors were significantly higher in patients with sickle cell anemia during the flue incidents which corresponded to the anemic crisis and hospitalization.

[0034] High levels of the NMDA receptors and sensitization of HbSS patients' erythrocytes to NMDA treatment was shown. There was no direct correlation of the abundance of receptors in red cells and the amount of reticulocytes (routine blood status analysis), but rather with specific hematological disorders such as sickle cell anemia. Functional activity of the receptors was assessed by measuring K+(86Rb) influx through the receptor channels and 3H-MK-801 finding studies. Routine screening of control individuals for the receptor expression in erythrocytes revealed that one of them with abnormally high number of receptor copies had beta-thalassemia minor.

[0035] Abnormally high sensitivity of the HbSS erythrocytes to NMDA treatment can be followed microscopically as changes in cell morphology. Shown in Fig 3 are the cells of healthy donors and HbSS patients exposed to 1 mM NMDA with and without pre-treatment with 50 µM of MK-801/memantine.

[0036] A prospective phase II clinical feasibility study in human sickle cell patients with a NMDAR blocker can be performed as follows: It starts with an oral treatment with memantine hydrochloride. The maximal daily dose is analogous to the clinical experiences in Alzheimer disease, i.e. 20mg with a starting dose of 5mg daily and if tolerability is good a weekly increase of 5mg a day till the maximal tolerable dosage has been reached. In case of moderate renal insufficiency (Creatinin-Clearance 40-60 ml/min/1.73m2) the maximal dosage is reduced to 10mg daily. The treatment with memantine hydrochloride will be continued for one year and during this time all adverse events due to sickle cell anemia and possible side effects of the treatment are monitored. These data are compared with the history of the patient under best supportive care during the year before inclusion in the study. Endpoints of the study are severity and frequency of adverse events due to sickle cell anemia and tolerability of the treatment with memantine hydrochloride.

1. A N-methyl D-aspartate receptor (NMDAR) blocker for use in preventing irreversible shrinkage of erythrocytes of patients with sickle cell anemia, characterized in that it is selected from memantine and MK-801.

4. The NMDAR blocker for use according to one of claims 1 to 3, said use being treatment of a human with a quantity of NMDAR blocker in a daily dose of 0.001 mg/kg to 10 mg/kg. 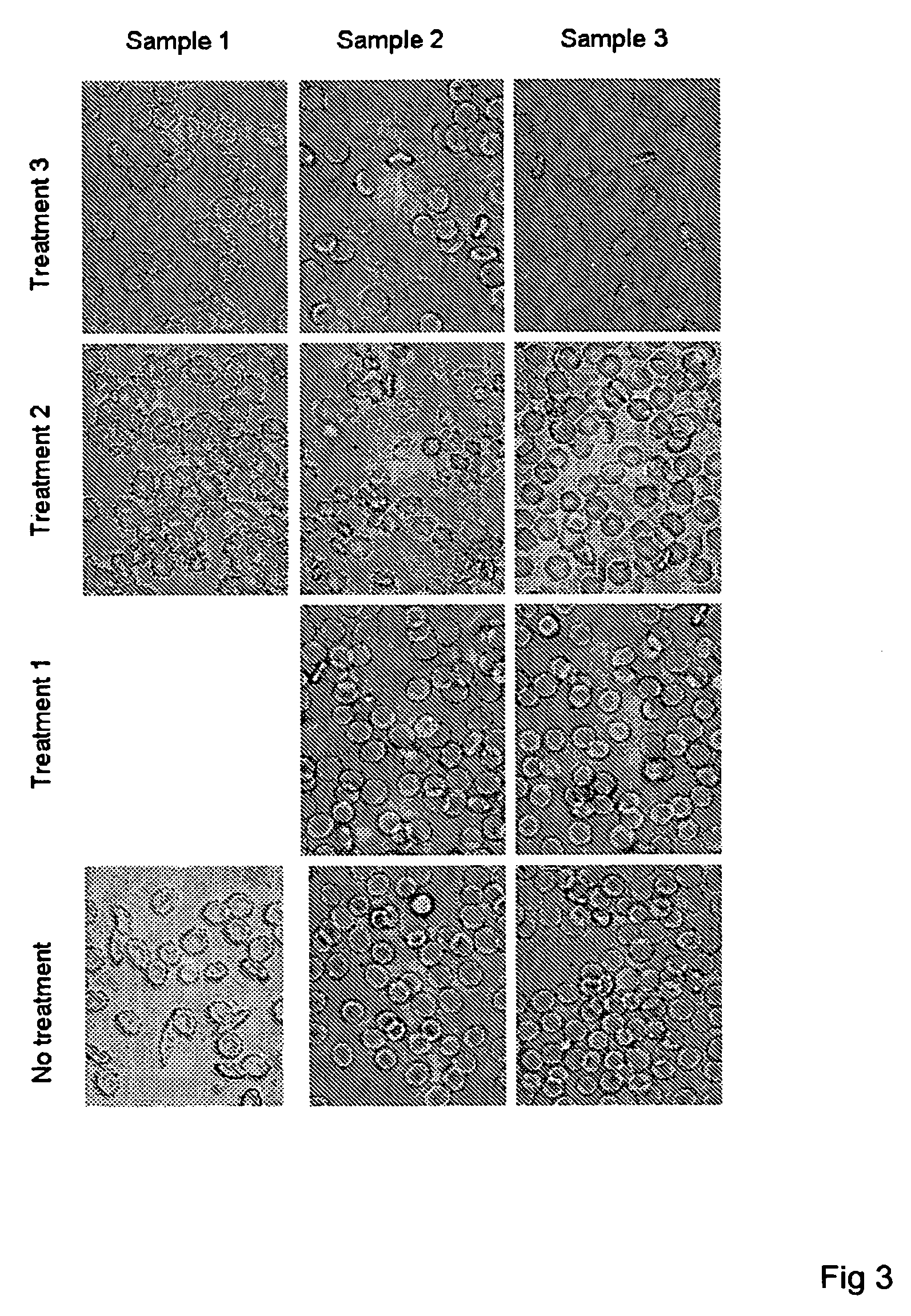