[0001] The present invention relates to a sheath for a smoking article, such as a filter cigarette, which contains a smokable product such as tobacco.

[0002] Various types of composite filter constructions are known in the art for use with smoking articles that have a plurality of separate filter sections with different filtering capacities, made of different materials such as cellulose acetate and containing charcoal particles. However, while a portion of the total particulate matter (TPM) components of smoke can be removed by the use of composite filters, it is not possible to filter undesirable substances effectively from the gas phase (GP), which accounts for the majority of the total smoke.
[0003] One known way of reducing the delivery of unwanted GP components consists of diluting the gaseous smoke flow by introducing ambient air whenever the consumer inhales on the smoking article. This approach to reducing the concentration of GP components has several associated advantages. In particular, the consumer continues to receive the desired components and associated taste effects of the gaseous smoke flow. Furthermore, the cooler ambient air lowers the temperature of the smoke entering the mouth and throat, producing a more pleasant and agreeable smoking effect.
[0004] A number of means are known in the art whereby ambient air enters into the gaseous smoke flow of a smoking article. For example, the wrapping paper surrounding the filter, the smokable product, or both, may be made of porous material that allows ambient air to pass through and mix with the gaseous smoke flow within the smoking article. Alternatively, either or both of these wrappers may possess perforations or openings.
[0005] Generally, such ventilation structures are constructed as part of the filter tip rather than the rod of smokable material. This is for several reasons, not least because they would obviously otherwise be destroyed as the article is smoked. However, a general problem with the placement of ventilation structures in the filter tip is that they may become occluded by the consumer's fingers or mouth during actual smoking of the article. This will have the effect of reducing the level of dilution of GP components inhaled by the consumer.
[0006] The quantity and position of the ventilation holes, and their spatial relationship with the underlying components of the filter unit, determines the effect of the ventilation on the smoke delivery and hence on the smoking experience, and these features are carefully selected by the cigarette manufacturer. The effect will be altered if the ventilation is wholly or partially blocked. While smoking, it is possible that the smoker may inadvertently cover the ventilation holes with his fingers or mouth, thus changing the ventilation effect, which is undesirable.
[0007] To overcome this problem, various ways have been proposed to reduce the possibility of ventilation structure occlusion. One method in particular which has been utilised is to provide grooves or flutes to allow external air to penetrate the smoking article upon inhalation. According to this design, air enters the smoking article at a location close to or at the end of the filter tip furthest from the mouth. This area is less likely to become occluded by the fingers or mouth of the consumer.
[0008] EP 160380 discloses a cigarette with a tobacco rod that comprises a corrugated layer situated between the tobacco and the cigarette paper. In this manner the corrugated layer forms a series of conduits through which air is drawn as the consumer inhales. The disclosure is actually directed towards a means of strengthening the tobacco rod, and a drawback of the arrangement is that the proportion of the tobacco rod which actually comprises tobacco is significantly reduced.
[0009] A cigarette in which the filter tip comprises internal air conduits is disclosed in GB 2090117. Ambient air is able to enter these channels through perforations in the filter tip situated substantially mid-way between the mouth end and the tobacco end of the filter tip. The conduits are sealed at the tobacco end of the filter tip but are open at the mouth end to permit air to become drawn into the mouth upon inhalation where it can mix with the gaseous flow from the tobacco rod. An obvious drawback of this design is that the perforations through which air is able to enter the filter tip are located such that they could easily become occluded by the smoker.
[0010] EP 1688052 discloses a filter cigarette in which the core of filter material and a small proportion of the tobacco rod are surrounded by a ventilation passage. Ambient air is therefore directed along the ventilation passage and into the filter core to mix with the gaseous flow from the tobacco rod. The position along the tobacco rod at which ambient air enters the ventilation passages is unlikely to become occluded by the smoker.
[0011] US 4,498,487 discloses a cigarette in which air is channelled into the filter via a series of passages opening at a position close to the mouth end of the tobacco rod. A very similar arrangement is disclosed in JP 2004 248570.
[0012] All of these prior attempts to address this problem comprise complex filter structures which are integral to the construction of the smoking article, which adds to the manufacturing cost.
[0013] It has been documented that there is a drawback to the dilution of GP components with ambient air by the use of ventilating structures. The suggestion is that in response to the ventilation of the gaseous smoke flow with ambient air, consumers draw on the smoking article with an increased velocity, which actually reduces filter efficacy. It is therefore an aim of the current invention to prevent consumers from inhaling excessive levels of GP components in the case of an increased strength of draw. The smoking article of the current invention satisfies this aim by providing a mechanism of increasing the level of ambient air entering the smoking article when the consumer draws strongly.
[0014] It is a further aim of the invention to provide a smoking article in which ventilation structures provide maximal dilution of gaseous smoke flow with ambient air, wherein the occlusion of these ventilation structures is minimised, and the ability of a consumer to inadvertently overcome these features is reduced.

[0035] For a fuller understanding of the invention, reference is made to the accompanying drawings which illustrate an embodiment thereof given by way of example, in which:

Figure 1 shows a schematic side elevation view of the sheath with smoking article in situ.

Figure 2a shows an axial elevation of the mouth proximal end of an individual sheath, with smoking article in situ, according to the embodiment of Figure 1.

Figure 2b shows a cross sectional axial elevation of the distal (rod of smokable material) end of an individual sheath, with smoking article in situ, according to the embodiment of Figure 1.

Figure 3a shows a diagram of the sheath of Figure 1, with smoking article in situ indicating the path of the gaseous smoke flow and ambient air within the smoking article and sheath under conditions of a normal strength of draw.

Figure 3b shows the diagram as Figure 3a indicating the path of the gaseous smoke flow and ambient air within the smoking article and sheath upon a high strength of draw.

[0036] It should be noted that none of the figures are to scale. 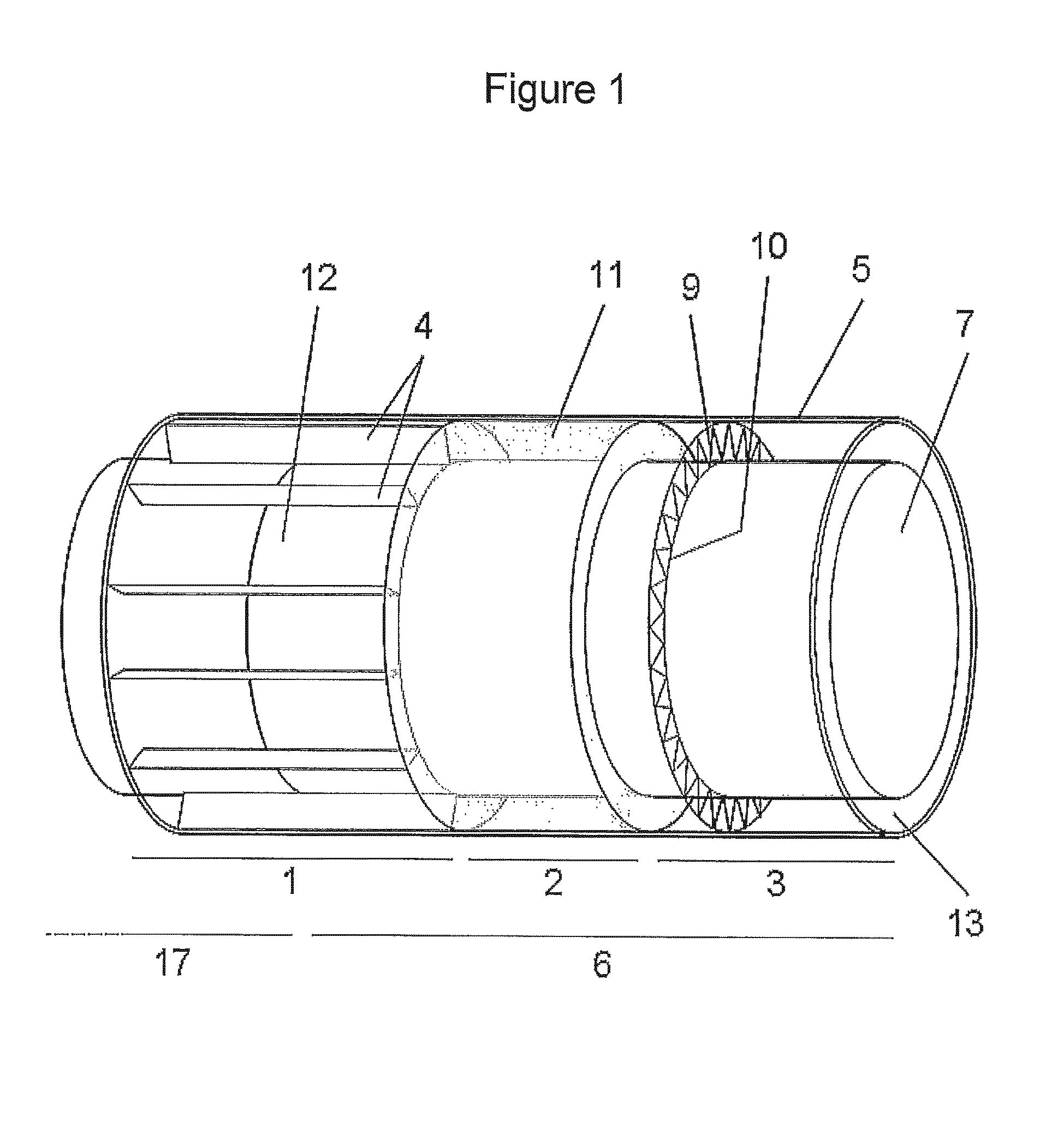 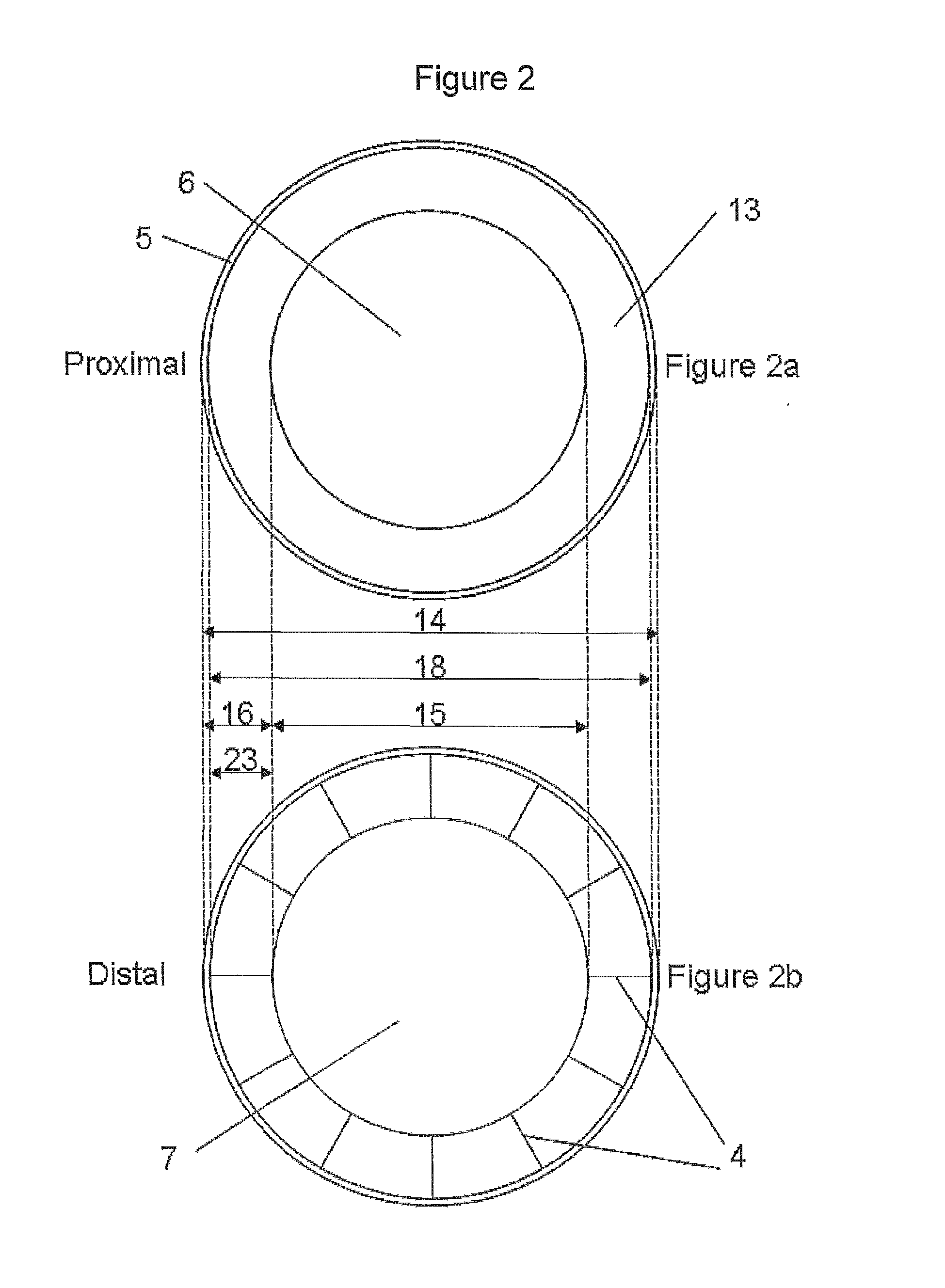 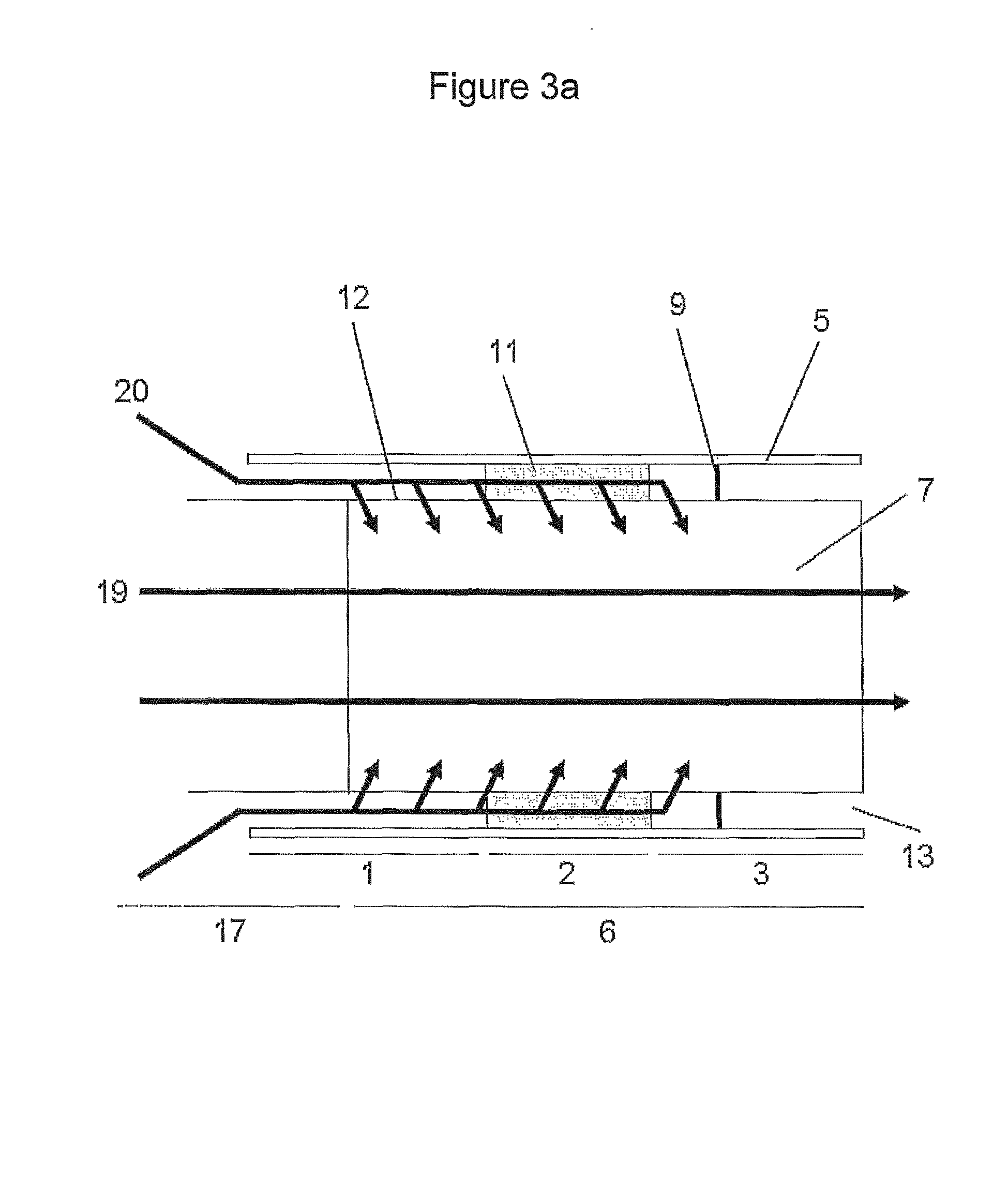 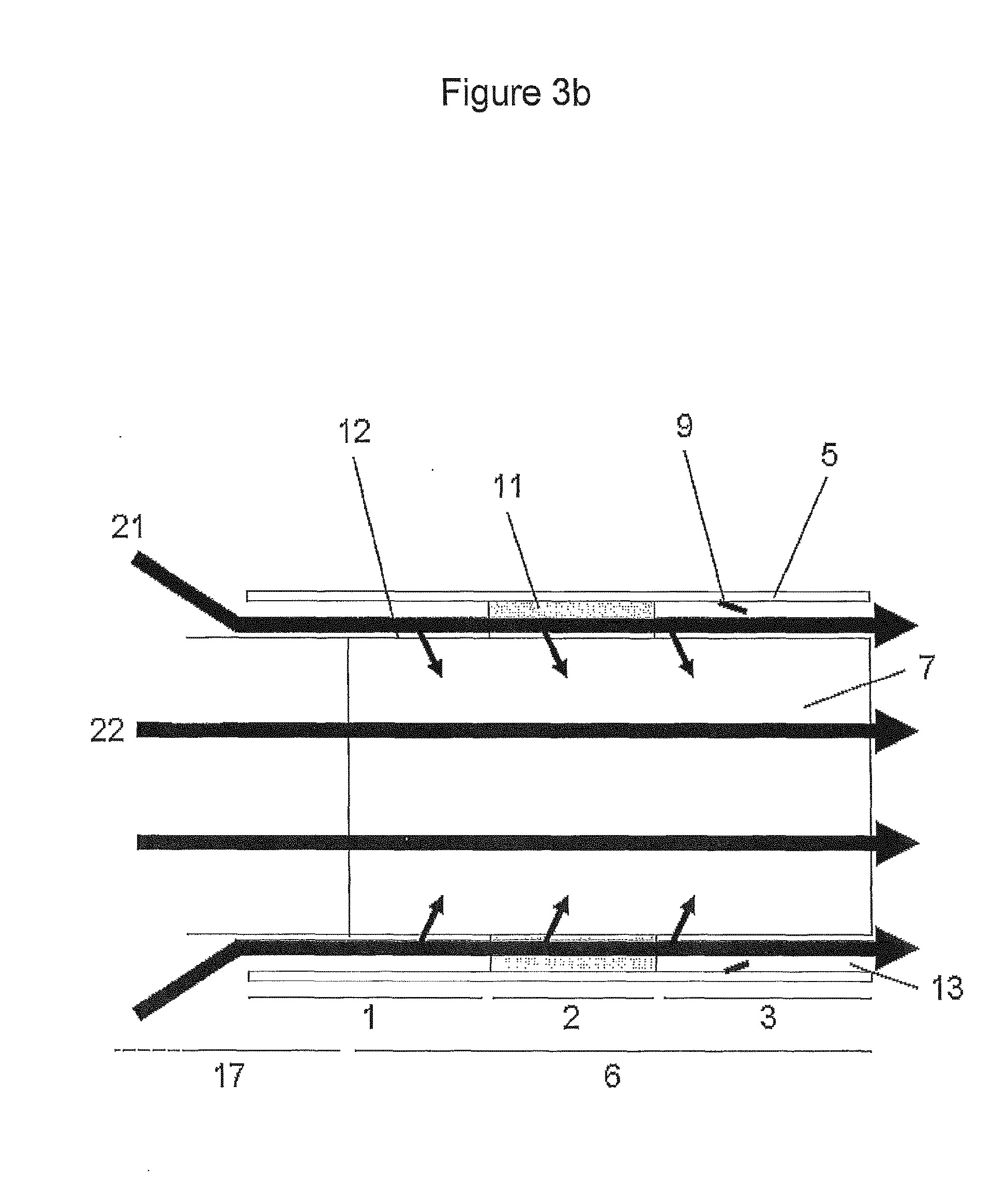 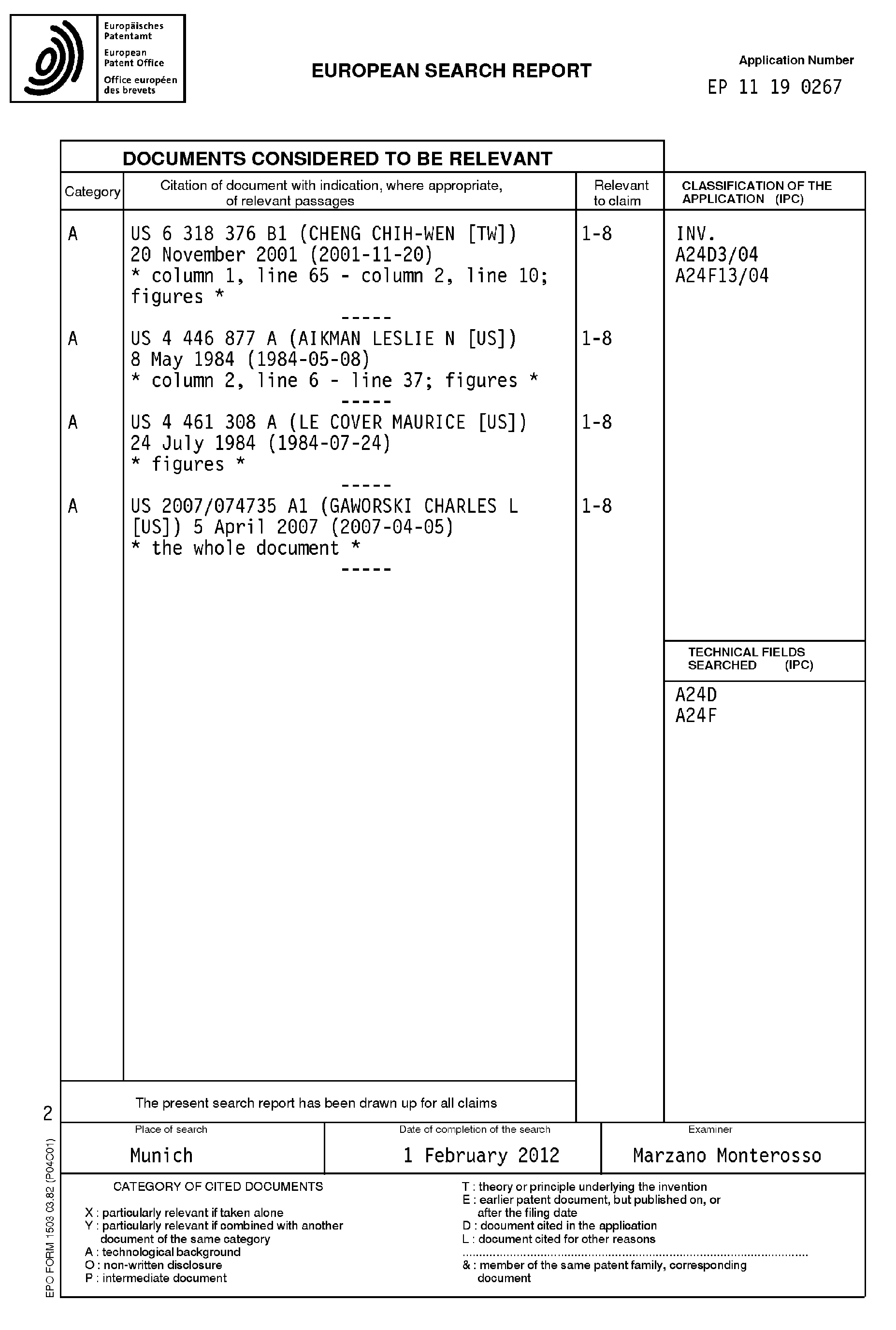 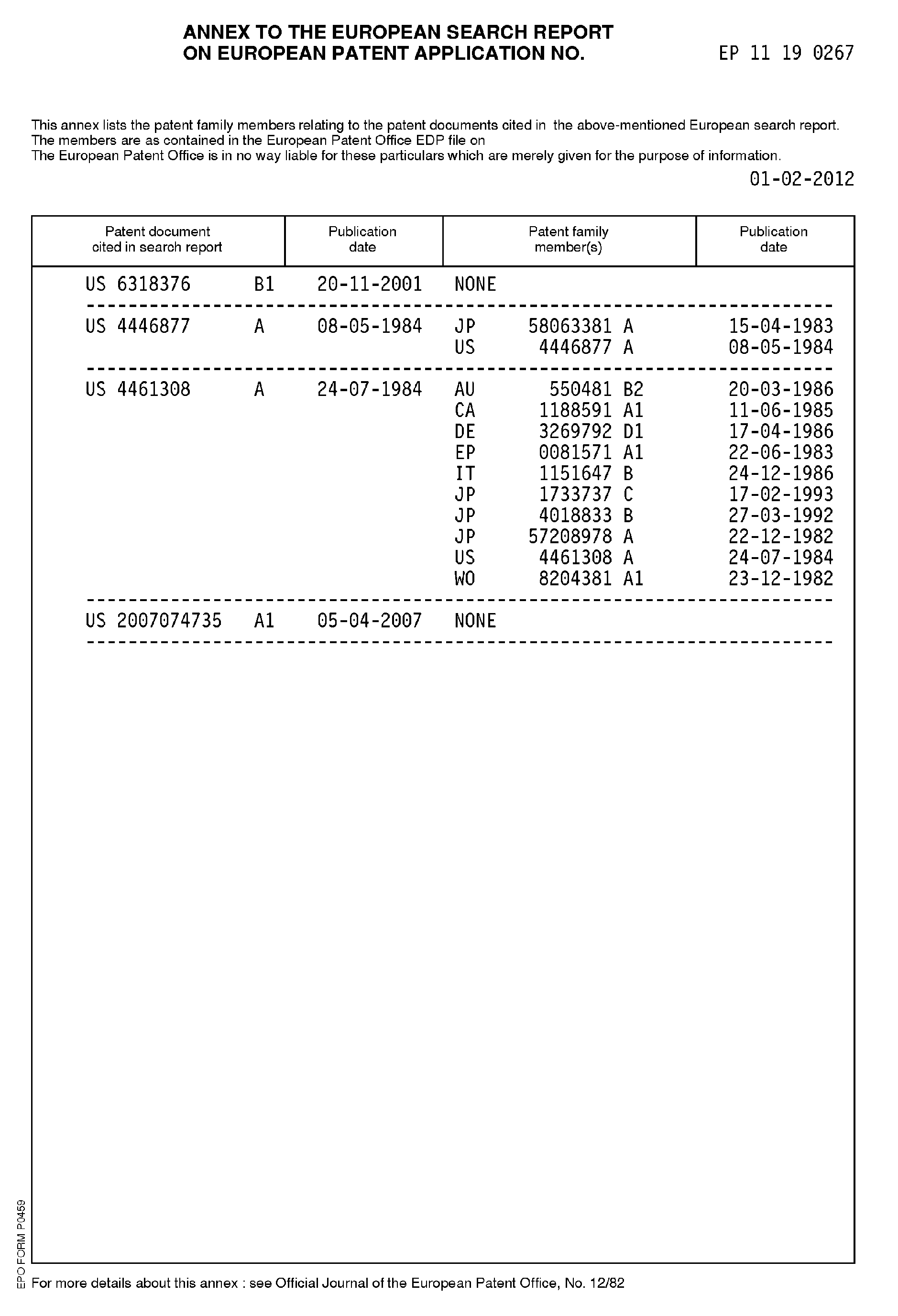