[0002] Systems using a black and white writing strategy, i.e. an "on" and "off" writing strategy, are widely known in the art. They may use, for example, laser beams or charged particle beams, and may feature the use of direct writing in maskless systems. By modulating the beam (or beams in multi-beam systems), individual grid cells in a rasterized virtual grid may be exposed or not exposed to write the desired pattern on to the target. Such beams are characterized by a so-called beam effect in the target surface, which is often described by a point spread function. The point spread function generally has a Gaussian distribution, which describes the extent of the surface area affected by a beam. The beam size is generally defined as the size of the distribution in which 50% of the beam energy is present.
[0003] Generally, the spot area of the beam at the surface area is much larger than the typical size of the grid cells. A full exposure of a certain grid cell thus also causes an exposure with less intensity in the grid cells adjacent to the exposed cell. So, in case of a charged particle beam, the number of charged particles deposited within an individual grid cell, also referred to as dose, constitutes of the sum of the dose received directly from exposure of the grid cell itself and indirectly from exposure of adjacent cells. By selecting a suitable cut-off level for development of the resist layer being exposed, desired feature dimensions can be obtained.
[0004] A particular kind of charged particle beam based lithographic system is known from U.S. Patent No. 6,897,458, assigned to the present owner of the invention, and involves a massive plurality of charged particle beamlets generated in a charged particle beam column for exposing a target. The charged particle beamlets are scanned over the target while being modulated. Additionally, the target may be capable of moving relative to the beams, for example in a direction transverse to the scanning direction of the beams. The modulation of the beamlets is performed on the basis of pattern data provided to the lithographic system. In the particular system described, the modulation is performed by blanking or blocking beamlets to effectively switch the beamlets on and off.
[0005] Exposing a target using this type of lithography system is achieved by the combination of relative movement of the target and modulation (e.g. timed "on" and "off" switching or blanking) of each charged particle beamlet. A known method to expose a substrate with beamlets is a raster scan method. In order to control the beamlets in such a scanning method, the pattern data is rasterized. The target is positioned on a motor driven stage that is moved in a continuous motion. As the stage is moved, the beam is scanned in a direction substantially perpendicular to the stage motion. By supplying the rasterized pattern data to the system, timed so that the beamlets are modulated in synchronism with the beamlet deflection and stage motion, the pattern represented by the pattern data can be transposed as an exposure pattern onto the surface of the target. The rasterized pattern data corresponds to an exposure pattern on a virtual raster cell grid on the surface of the target.
[0006] Existing charged particle beam technology is suitable for lithography systems for relatively course patterning of images, for example to achieve critical dimensions (CDs) of 90 nm and higher. However, a growing need exists for improved performance. It is desired to achieve considerably smaller critical dimensions, for example 22 nm, while maintaining sufficient wafer throughput, e.g. from 10 to 60 wafers per hour or higher.
[0007] In a conventionally rasterized pattern as discussed above feature placement is limited to the grid lines of the raster cell grid. However, due to for example correction rules needed to correct for several resolution-disturbing phenomena like the proximity effect, edges of a feature often do not necessarily fall on a grid line. For this reason, a tendency exists to choose the raster cell grid as small as possible.
[0008] However, in particular in charged particle beam systems using a plurality of beamlets, a grid size as large as possible is desired in view of data processing constraints. International application WO2007/105939, assigned to the present owner of the invention, addresses the issue of choosing a suitable grid size by introducing the use of "ragged" edges to enable placement of feature edges between grid lines.
[0009] A further difficulty of patterning with a plurality of beamlets is dose variation between different beamlets. In a charged particle system, the current per beamlet generally varies. In multibeam systems, different parts of a substrate to be patterned are exposed by different beamlets. As a result of beamlet dose variation, patterning errors may occur. A writing strategy as presented in WO2007/105939 is unable to resolve this issue.
[0010] WO 03/052516 discloses a method of generating a two-level pattern for lithographic processing by application of an error diffusion algorithm.

[0020] Various aspects of the invention will be further explained with reference to embodiments shown in the drawings wherein:

FIG. 1 is a simplified schematic overview of an example of a charged particle multi beamlet lithography system;

FIG. 2 is a simplified schematic overview, in side view, of an end module of the lithography system of FIG. 1;

FIGS. 4A, 4B schematically illustrate the concept of forming a multi-level pattern;

FIGS. 5A, 5B schematically illustrate two different trajectories for evaluation of a multi-level pattern by means of error diffusion;

FIGS. 6A, 6B schematically illustrates a result of applying one-dimensional evaluation of a multi-level pattern ;

FIGS. 7A, 7B schematically illustrate a result of applying one-dimensional evaluation of a multi-level pattern according to an embodiment of the present invention;

FIGS. 8A, 8B schematically illustrate different types of kernels that may be applied in two-dimensional error diffusion applied on a multi-level pattern according to embodiments of the invention;

FIGS. 9A, 9B schematically illustrate the concept of a no-shift condition;

1. A method of generating a two-level pattern for lithographic processing by multiple beamlets, the method comprising:

- providing a pattern in vector format;

- dividing the array of pixels in portions, each portion being assigned to be patterned by a different beamlet;

- determining an error diffusion parameter value for each portion;

- assigning a two-level value to the pixel cells within each portion using said error diffusion parameter value as determined.

2. The method of claim 1, wherein the pixmap comprises an array of pixel cells, and wherein a multi-level value is assigned to each pixel cell.

3. The method of claim 2, wherein providing multi-level values to pixel cells is based on relative coverage of the vector-format pattern by the respective pixel cell.

4. The method of claim 2 or 3, wherein providing multi-level values to pixel cells is based on dose level values of the vector format pattern.

5. The method of any one of the preceding claims, wherein the vector-format pattern is formed by two-level values.

6. The method of any one of the preceding claims, wherein determining the error diffusion parameter value is based on beamlet current measurements.

7. The method of any one of the preceding claims, wherein said error diffusion parameter value is a threshold value, and wherein said assigning a two-level value to the pixel cells within a portion is based on comparison with the threshold value determined for said portion.

8. The method of any one of the preceding claims, wherein said error diffusion parameter is a value representing the higher level of the two-level value.

10. The method of any one of claims 2-9, wherein the application of error diffusion is further restricted by disallowing diffusion towards one or more pixel cells that fulfill a no-shift condition.

11. A computer readable medium configured to perform, when executed by a processor, the method of generating a two-level pattern as defined by any one of claims 1-10.

- an input for receiving a pattern in vector format;

- a processing unit configured to perform the method of generating a two-level pattern for lithographic processing according to any one of claims 1-10; and

- an output for supplying the two-level pattern.

13. A charged particle multi-beamlet system arranged to expose a target (11) using a plurality of beamlets (21), the system comprising:

- a beamlet modulation system (6) for modulating the plurality of beamlets (21) so as to form an exposure pattern;

- a projection system (7) for projecting the modulated beamlets on to the surface of the target (11);

- a deflector array (9) for deflecting the plurality of beamlets in a first direction;

- a substrate support member for supporting the target to be exposed;

- a control unit arranged to coordinate relative movement between the substrate support member and the plurality of beamlets in a second direction and movement of the group of beamlets in the first direction such that the target can be exposed in accordance with an array of pixel cells;

- a charged particle multi-beamlet system for exposing a target using a plurality of beamlets in accordance with a two-level pattern; 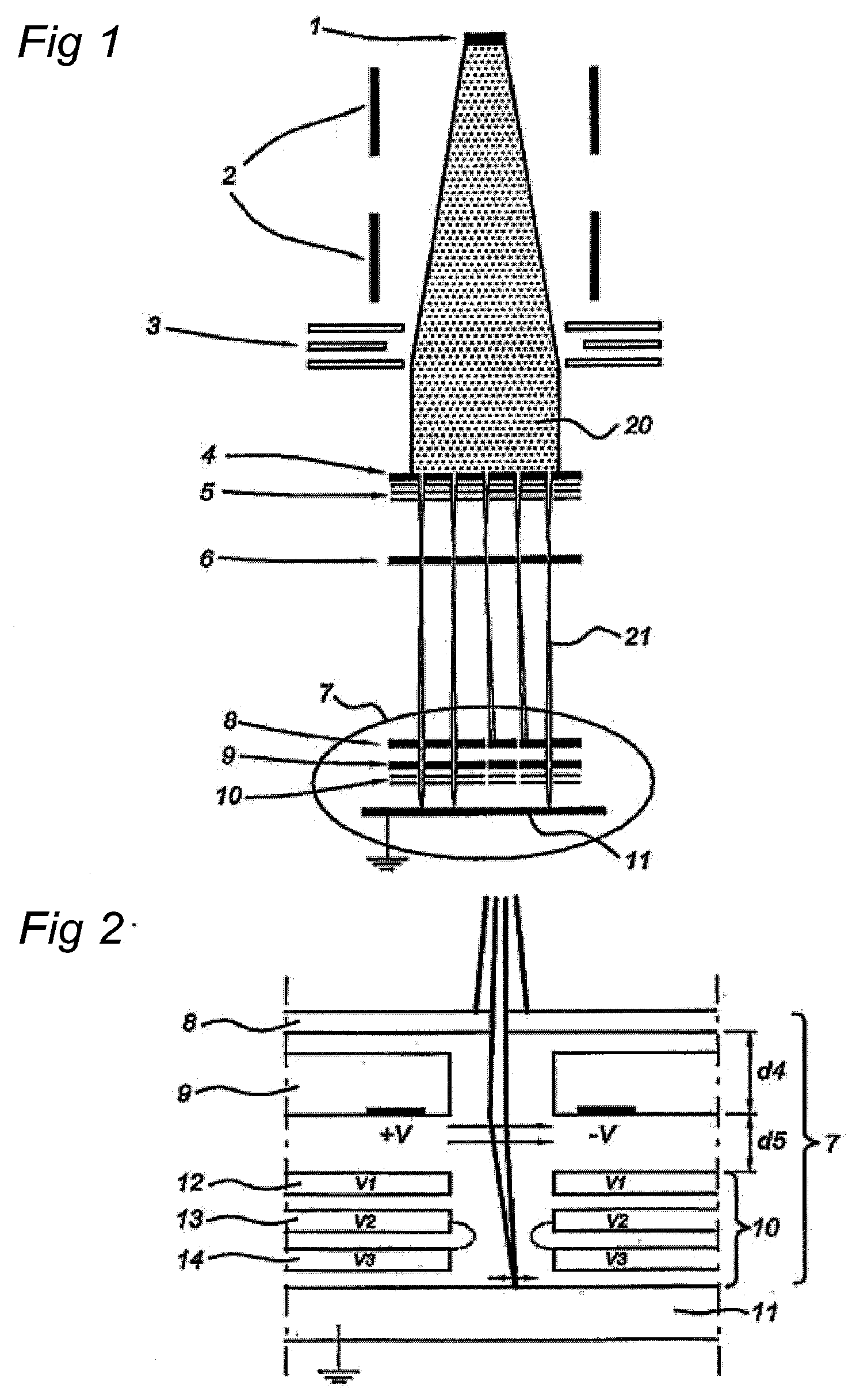 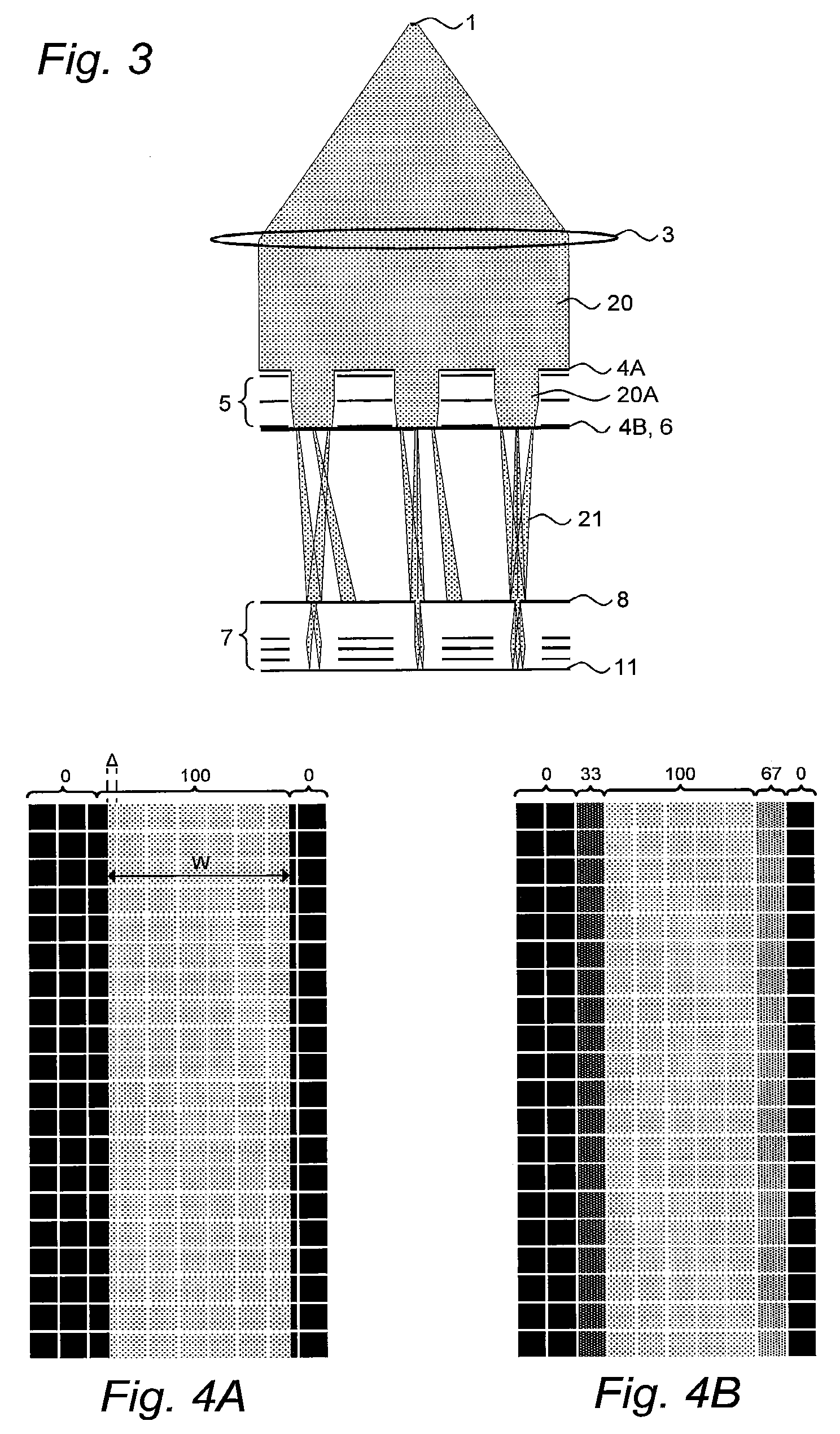 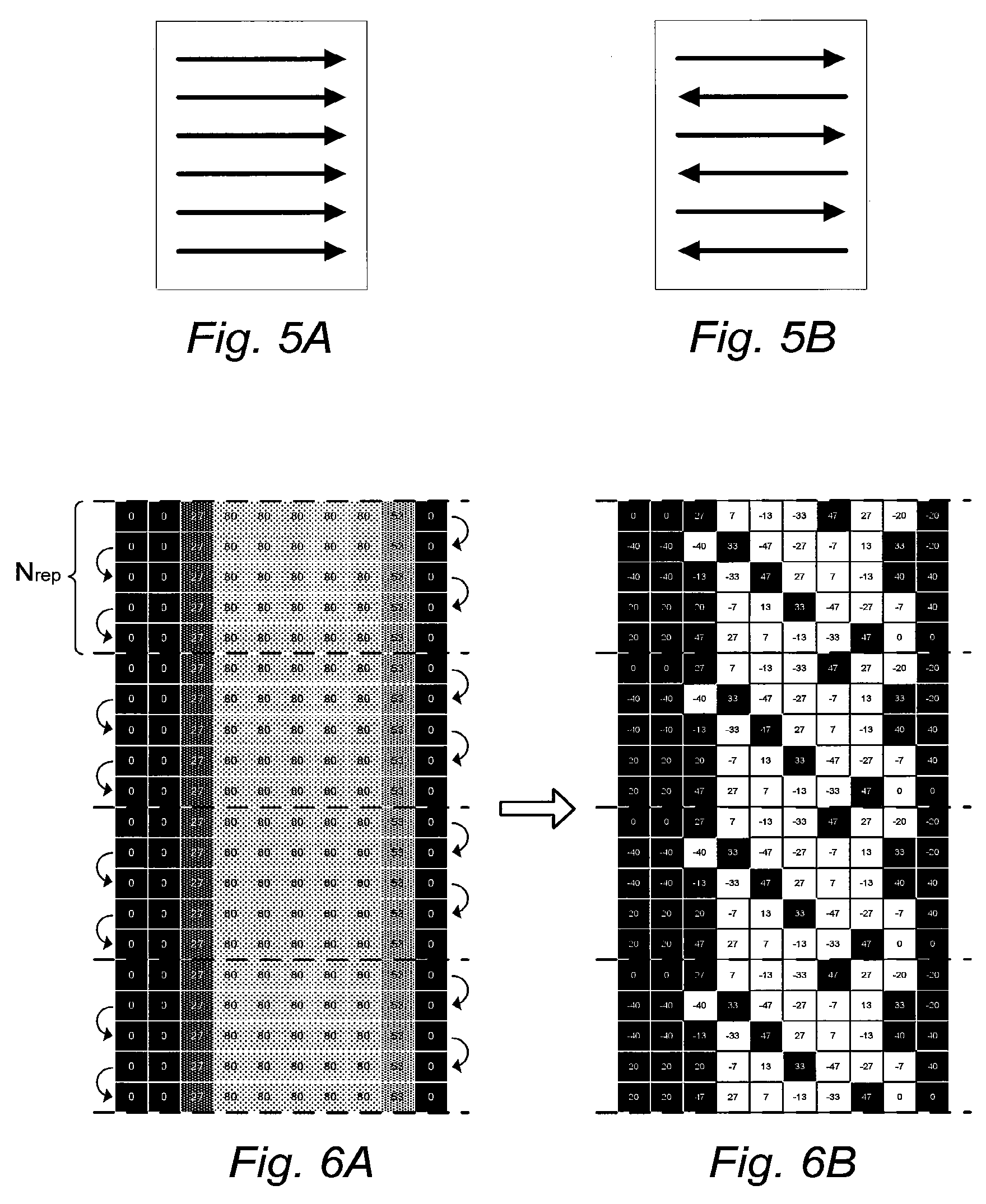 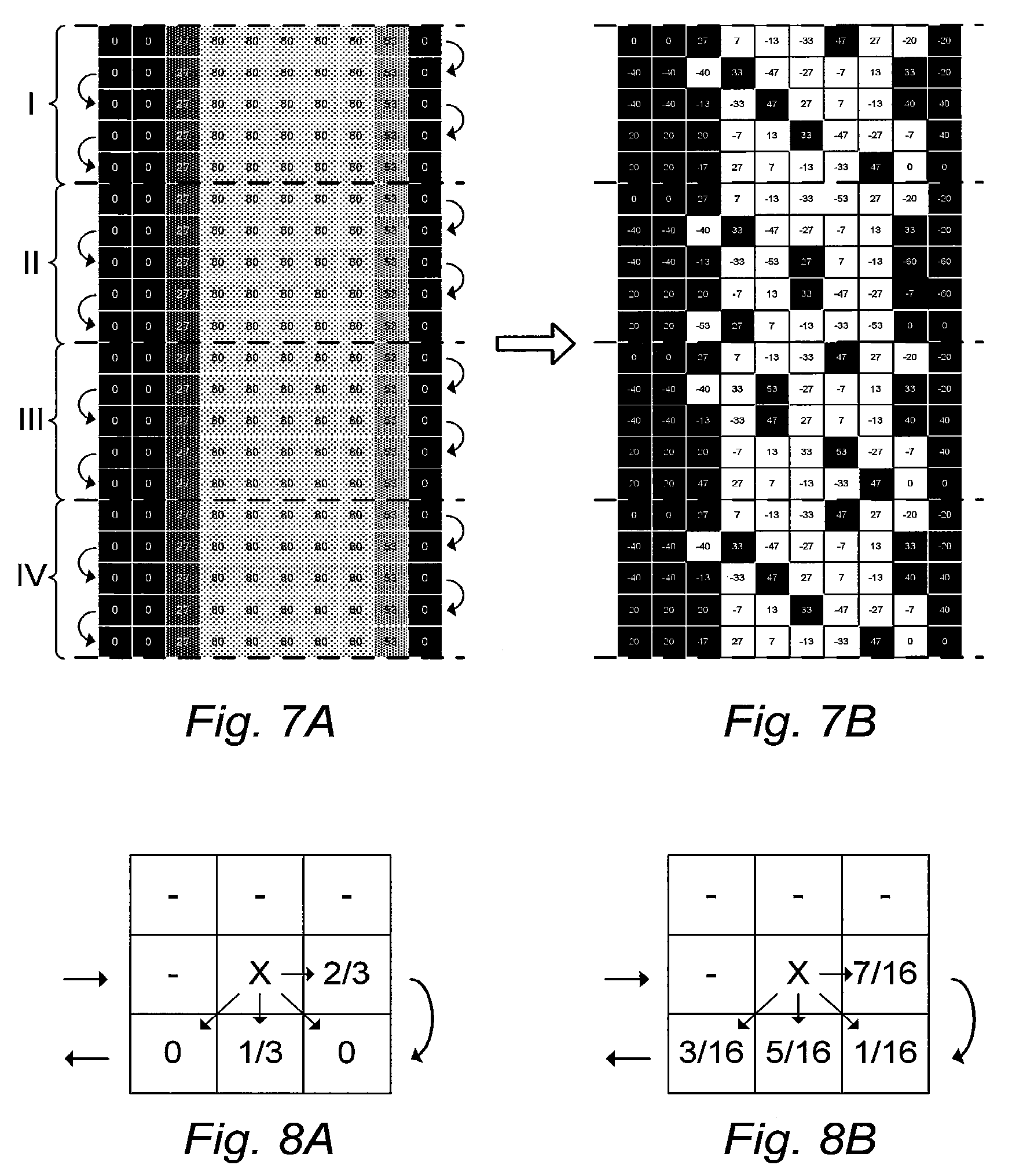 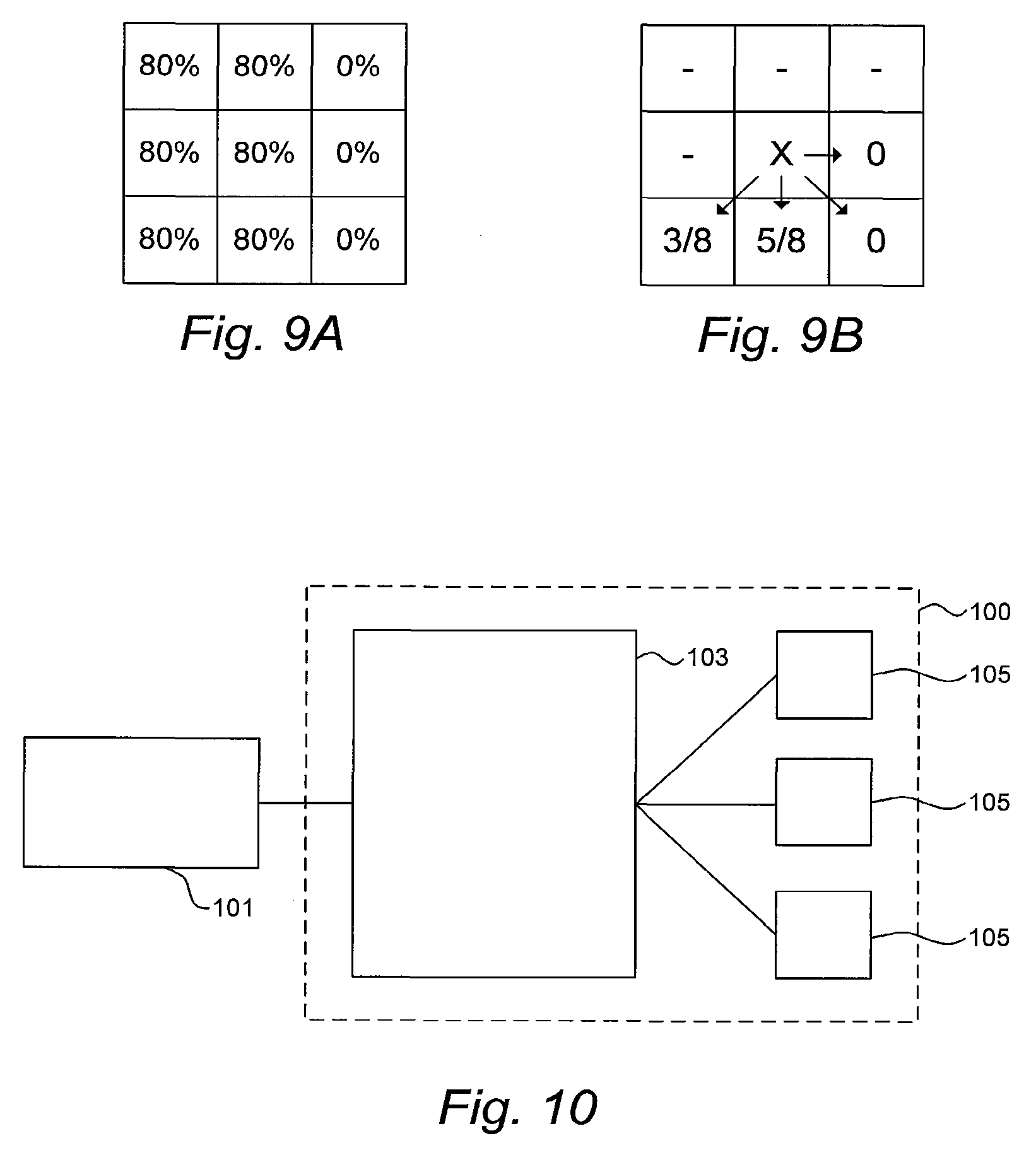