[0002] Umbilicals are widely used in offshore oil production. In a dynamic umbilical, a large diameter Super Duplex center tube is a preferred part. At sea, there is often a harsh environment with waves making oil platforms and the like move dynamically.
[0003] An umbilical, connecting the sea bottom with an oil platform, will get forces applied resulting in induced geometrical deformation. This deformation will in turn lead to metal fatigue resulting in reduced lifetime for the umbilical. This is particularly the case for the center tube or center tubes. The degree of deformation is proportional to the diameter of a tube. One way of overcoming this problem is to replace said large center tube by several smaller tubes. For instance, one 50 mm tube can be replaced by 7 smaller tubes, each having a diameter of 25 mm. The smaller tubes have to have greater total net cross section due to the fact that flow resistance increases with the smaller tubes. Such designs are significantly more expensive than a solution with just one larger center tube.
[0004] The area where umbilicals are subject to fatigue problems is primarily near the end part of the umbilical where it is terminated in the top side of a platform structure or vessel. Below the platform, an umbilical will pass through a bend stiffener. This is a common way of reducing the strain on an umbilical. A bend stiffener is normally conically tapered with a wide end on the upside where the umbilical is terminated and a thin end on the other side where the umbilical extends downwards.
[0005] The task of the bend stiffener is to spread the movement of the umbilical over some limited distance so that the bending radius of the umbilical is increased. In this way, forces on critical components like central tubes are not concentrated just at the point of entrance of the umbilical to the platform but spread along the bend stiffener. One problem with bend stiffeners is that central tubes with an inner diameter of 35 mm to 80 mm and even more, and with a wall thickness of 2 mm to 7 mm or more are rather stiff. This size tolerates only quite large bending diameters in order not to fail due to fatigue stress during its required lifetime. Bend stiffeners are made in lengths up to and even more than 7,5 meters. Bend stiffeners this long are difficult and expensive to produce and this is therefore a problem.
[0006] Super Duplex is a well-known material in the umbilical business and production of the tubes is well documented. The business has a long track record of production of such tubes, cables and termination. Extensive testing and field experience in the area adds to that.
[0007] A large Super Duplex center tube instead of several smaller Super Duplex tubes in an umbilical, results in a much cheaper umbilical.
[0008] US2006/0144456 discloses an umbilical for use in the offshore production of hydrocarbons comprising an assembly of functional elements wherein at least one functional element is a flexible hose which comprises an inner corrugated metallic tube covered by a thermoplastic sheath.

Description of the diagrams

[0013] The present invention will now be described, by way of example, with reference to the following diagrams wherein:

2. System according to claim 1, characterized in that the upper part (I) corresponds to 70% of a total length of the bend stiffener (1).

3. System according to any of claims 1 or 2, characterized in that the center tube (4) is made of Super Duplex steel.

4. System according to any of claims 1 to 3, characterized in that the center tube (4) is sheathed with a polyethylene sheath (7).

5. System according to claim 4 characterized in that a volume between the corrugated part of the center tube (4) and the polyethylene sheath (7) is filled with elastomer or soft polymer. 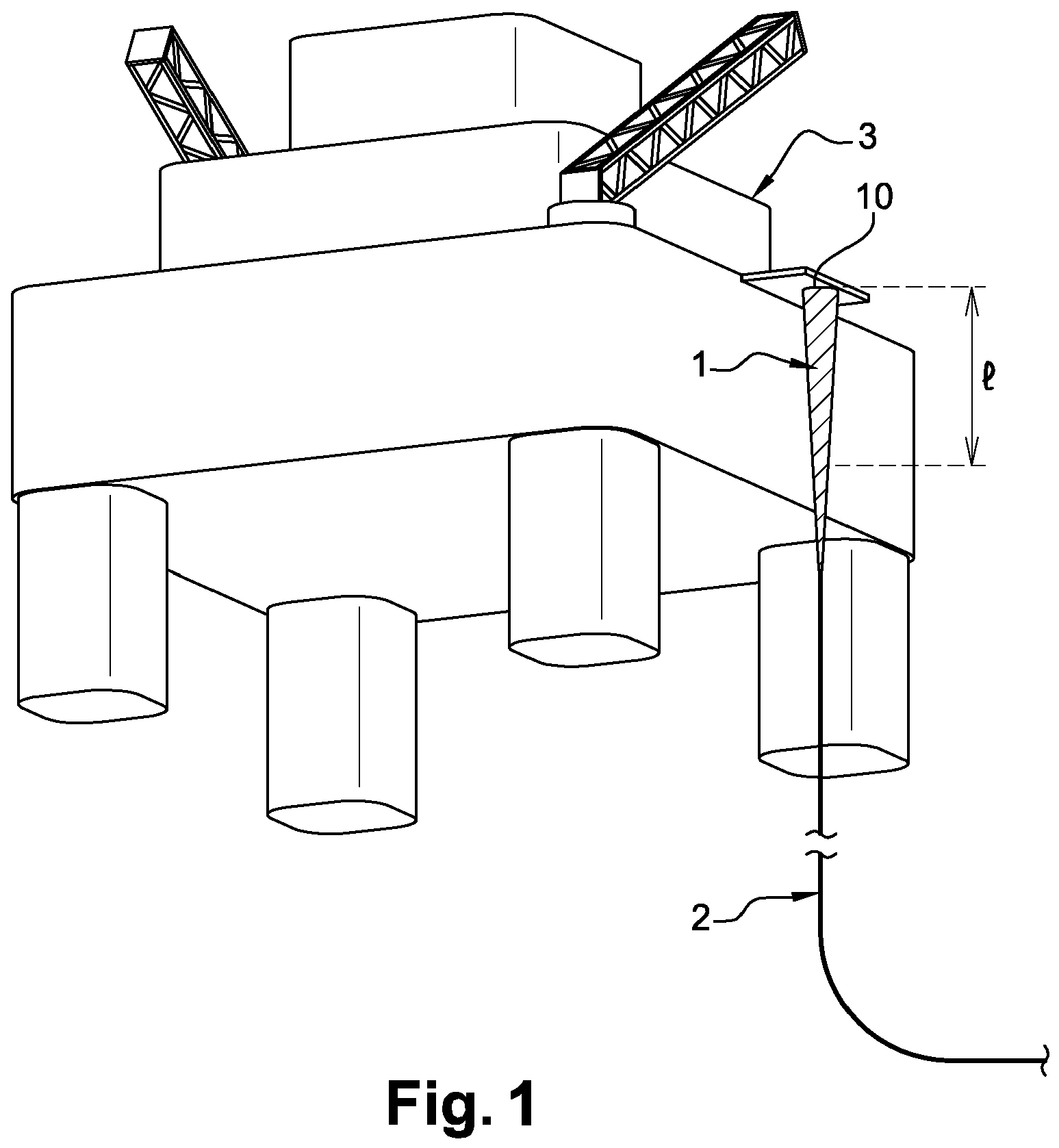 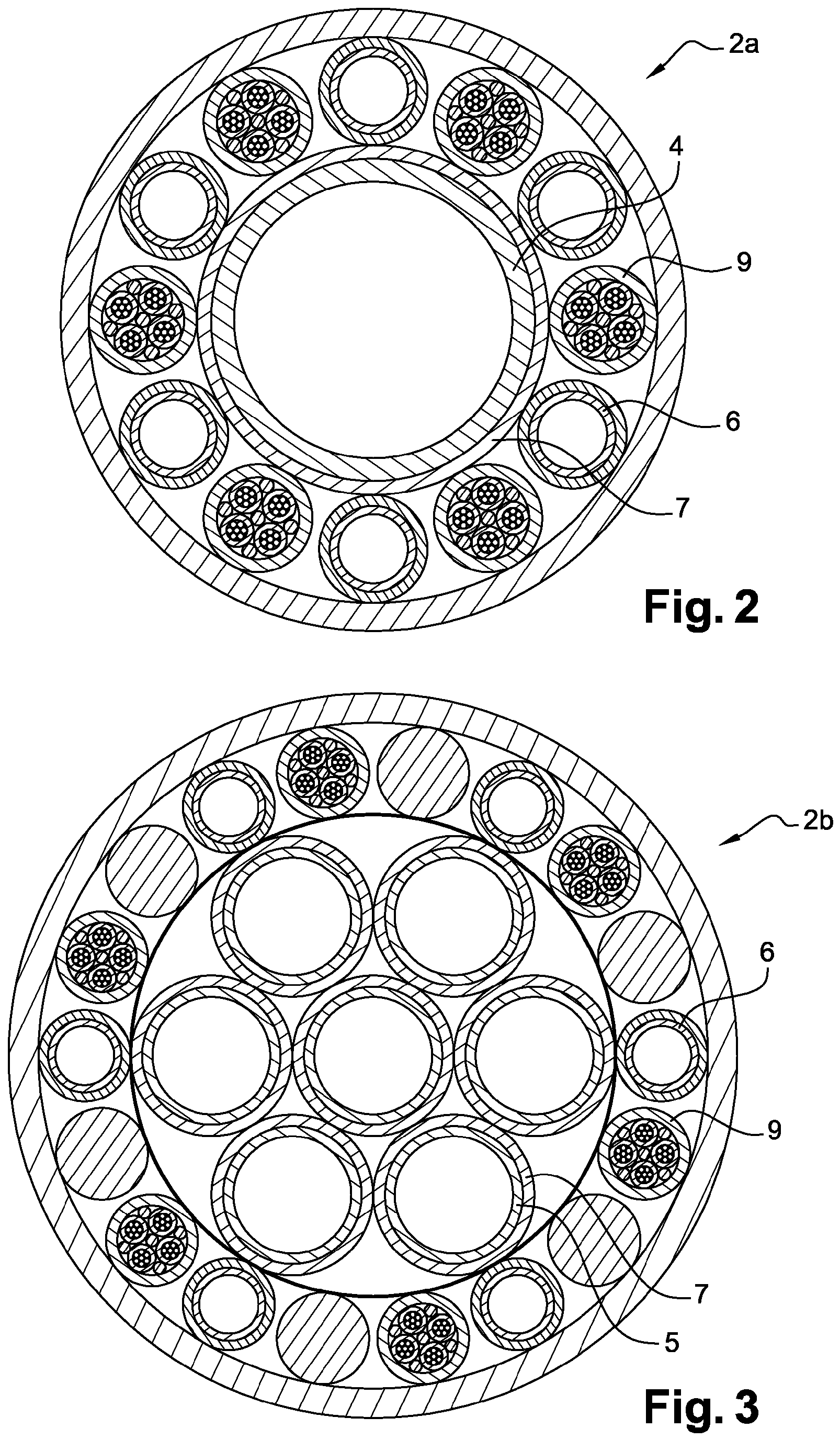