[0019] The present invention provides a system as detailed in claim 1 and a method according to claim 10. Advantageous features are provided in dependent claims.

[0020] Illustrative embodiments of the present invention will be discussed with reference to the accompanying drawings wherein:

FIGURE 1 is a system overview diagram of a vehicle guidance system in accordance with an illustrative embodiment of the present invention;

FIGURE 2 is a sectional view of a drive assembly forming in an illustrative embodiment a component of the vehicle guidance system illustrated in Figure 1;

FIGURE 3 is an exploded perspective view of a drive assembly forming in an illustrative embodiment a component of the vehicle guidance system illustrated in Figure 1;

FIGURE 4 is figurative view of the driver's cabin of a vehicle depicting a standard manually operable steering wheel assembly;

FIGURE 6 is a system architecture diagram of a vehicle guidance system in accordance with an illustrative embodiment of the present invention.

[0021] In the following description, like reference characters designate like or corresponding parts throughout the several views of the drawings.

▪ the difference from the prescribed motor speed and the actual or monitored motor speed is exceeded by more than preset "max_speed_error" for more than "max_error_duration";

▪ there occurs a difference in the monitored direction of rotation of the motor from the prescribed direction that the controller has been commanding;

▪ the monitored acceleration of the motor/steering wheel is in a direction opposite to the direction that the motor is commanded to apply torque;

▪ the monitored track error (position of vehicle with respect to planned path) stays beyond preset maximum for a predetermined time; and

▪ the monitored motor temperature is outside of normal operating range.

[0062] If any of the above error conditions are met, motor controller 430 generates a disengage warning signal 430B to receiver/steering controller 410 to disengage automatic steering mode.
[0063] In another illustrative embodiment, a combination of two or more of the above error conditions are weighted and combined to form a weighted error value which will generate a disengage warning signal 430B when it exceeds a predetermined value. In this manner, the weighted error value can be tuned by modifying the weighting coefficients to take into account steering dynamics and operator behaviour. In yet another illustrative embodiment, the degree of difference between the commanded and monitored values is taken into account when determining the error condition. As an example, where the prescribed or commanded motor speed is 50% above the "max_speed _error" then the "max_error_duration" would be suitably reduced.
[0064] Advantageously, when the automatic steering mode is disengaged whether manually or automatically, the operator will be able to manually operate the steering wheel 210 (as in Figure 4) in a similar manner to standard operation of the vehicle as motor 300 will provide no discernable extra resistance torque to the turning of the steering wheel 210 by the operator unlike many prior art arrangements where the operator will need to manually disengage the drive mechanism of the vehicle guidance system from the steering wheel before continuing to operate the vehicle.
[0065] In the illustrative embodiments described herein, the stator element of the electric motor 300 is of an ironless design resulting in zero torque being exerted on the steering shaft (and hence the steering wheel) when power is removed from the motor 300. In this manner, the operator's experience on operating the steering wheel when the vehicle guidance system is disengaged will be identical to that experienced when no drive assembly is fitted.
[0066] Those of skill in the art would further appreciate that the various illustrative logical blocks, modules, circuits, and algorithm steps described in connection with the embodiments disclosed herein may be implemented as electronic hardware, computer software, or combinations of both. To clearly illustrate this interchangeability of hardware and software, various illustrative components, blocks, modules, circuits, and steps have been described above generally in terms of their functionality. Whether such functionality is implemented as hardware or software depends upon the particular application and design constraints imposed on the overall system. Skilled artisans may implement the described functionality in varying ways for each particular application, but such implementation decisions should not be interpreted as causing a departure from the scope of the present invention, as defined by the following claims.
[0067] It will be understood that the term "comprise" and any of its derivatives (e.g. comprises, comprising) as used in this specification is to be taken to be inclusive of features to which it refers, and is not meant to exclude the presence of any additional features unless otherwise stated or implied.
[0068] The reference to any prior art in this specification is not, and should not be taken as, an acknowledgement of any form of suggestion that such prior art forms part of the common general knowledge.
[0069] Although illustrative embodiments have been described in the foregoing detailed description, it will be understood that the invention is not limited to the embodiments disclosed, but is capable of numerous rearrangements, modifications and substitutions without departing from the scope of the invention as set forth and defined by the following claims.

a receiver (110) for receiving a position indication signal;

6. The vehicle guidance system (100) of any one of the preceding claims, wherein the steering wheel assembly (200) and drive assembly (130) are removable as a unit from the steering shaft (230).

7. A method of disengaging the drive assembly (130) in the vehicle guidance system (100) of claim 1, the method including the steps of:

commanding (430A) the drive assembly (130) to achieve a prescribed value of a performance parameter;

monitoring the drive assembly (130) to determine an actual value of the performance parameter;

11. The method of disengaging the drive assembly (130) as claimed in any one of claims 7 to 10, wherein the difference measure is evaluated over a predetermined time period. 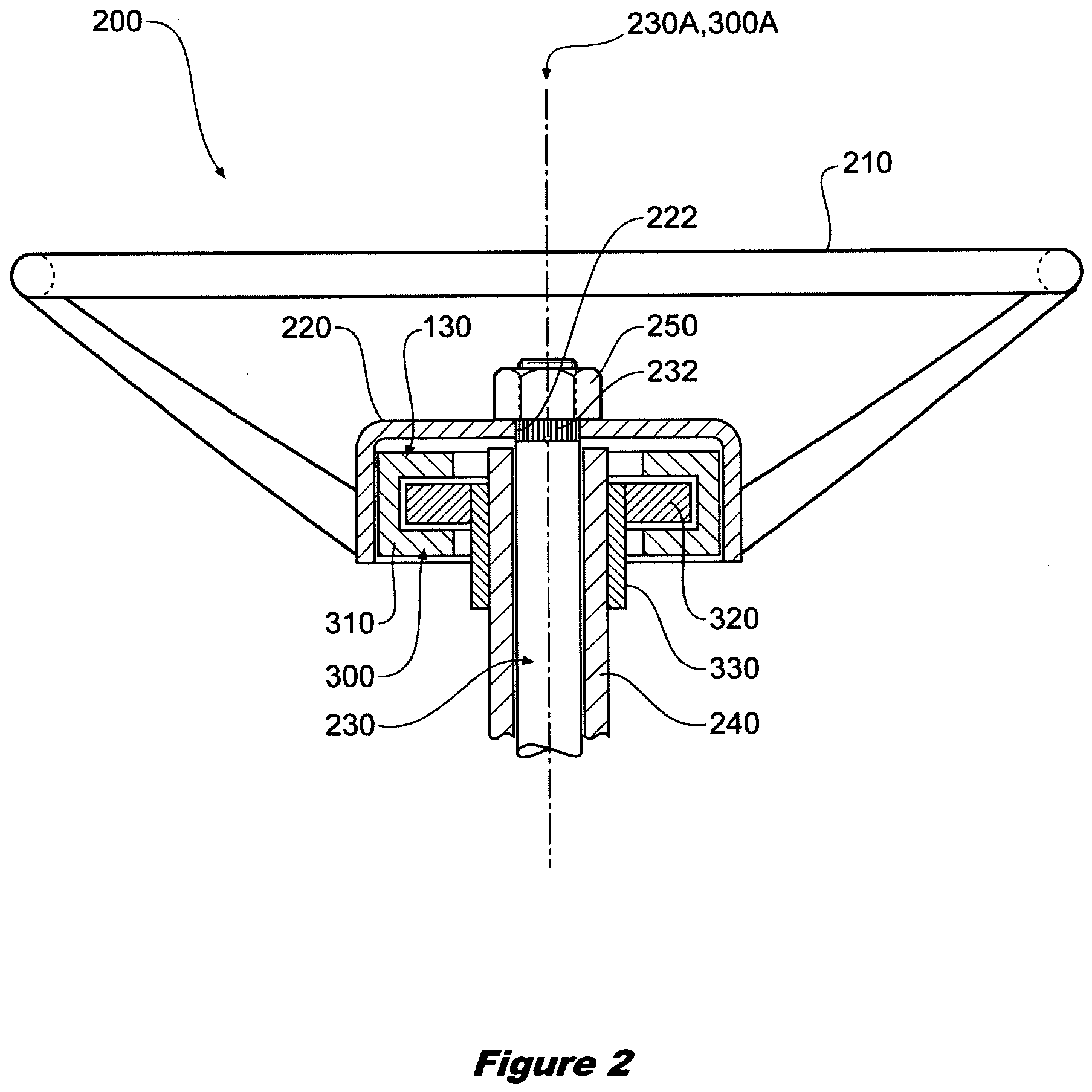 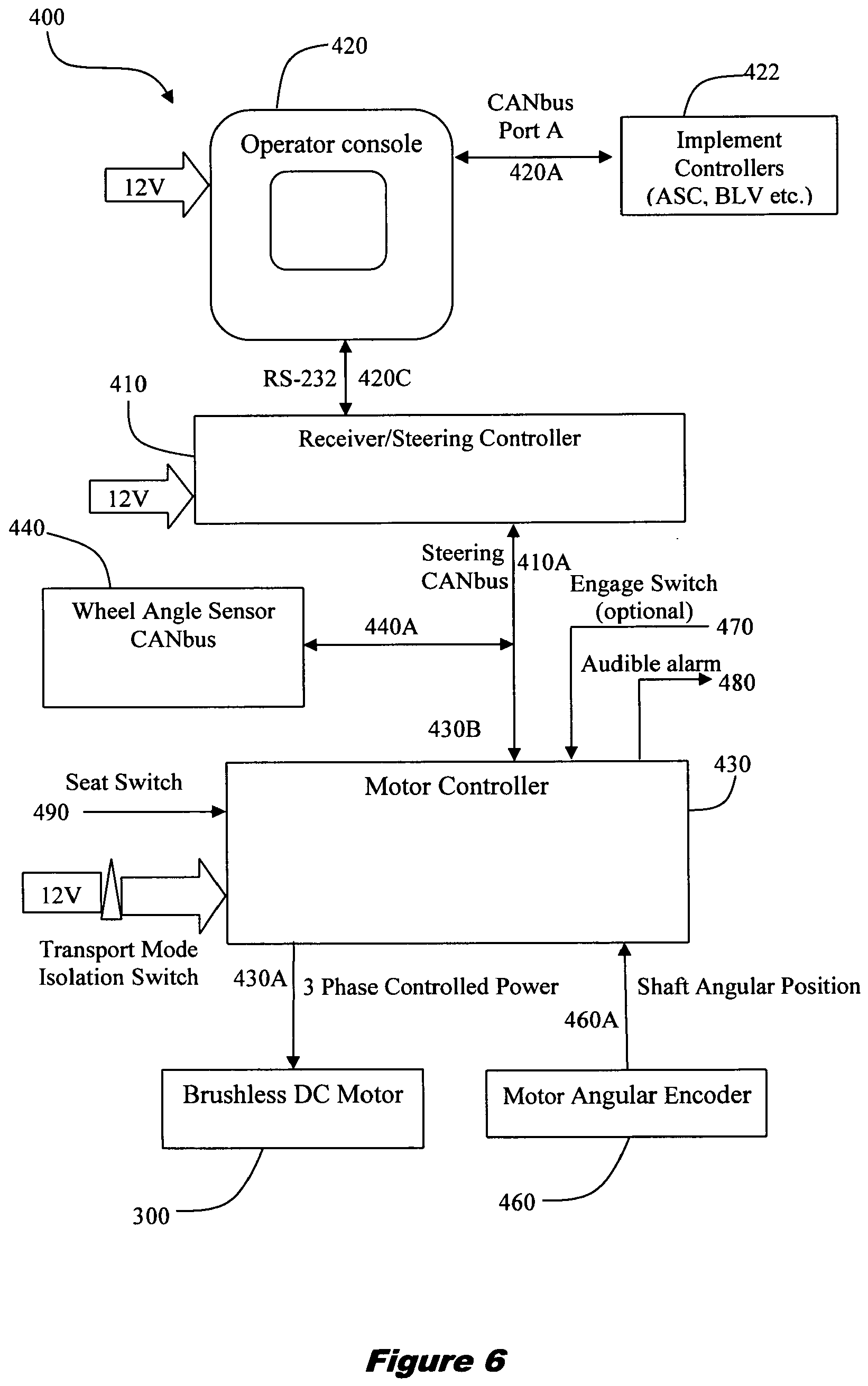