[0001] The present invention relates generally to onboard charging systems for primary energy storage systems of electric vehicles (EVs), and more specifically to AC current control of such onboard chargers.
[0002] Conventional onboard chargers in EVs and other vehicles (e.g., forklifts, boats and the like) and other mobile energy storage installation charged via a battery charger that is plugged into a wall outlet use DC current requests to regulate charging of the battery cells. Such chargers do not use all available AC wall power which is central to the drawbacks of the conventional charging paradigm.
[0003] It is one goal of embodiments of the present invention to remove an associated DC efficiency of charging controllers when converting the AC wall power to DC charging current. The particular value for the efficiency is usually not measured for each charging system which can help to reduce costs and complexity. Conventional systems typically therefore assume a DC efficiency for each model and use of a charging system. For each charging system, the actual DC efficiency will likely be greater than the assumed efficiency but may be less in some cases. When the actual DC efficiency is less than the assumed efficiency, there is a risk that the charger will draw too large an AC current during charging in the absence of AC current limiting circuitry. Depending upon many factors, consequences of drawing too large an AC circuit include, when not properly protected, tripping an AC current breaker and increasing a fire risk, among other concerns. When the actual DC efficiency is greater than the assumed efficiency, adverse consequences are reduced but time to charge is needlessly increased for the overall charging.
[0004] To reduce these risks, the assumed DC efficiency is conservative as compared to the inherent manufacturing variation of the charging systems. The larger a disparity between any given charging system's actual DC efficiency and the assumed efficiency, the greater the drawback of these conventional systems.
[0005] The drawbacks of being conservative with the assumed DC efficiency are several-fold. For one, charging the battery with a conservative charging system means that, over the same period for a charging system that more accurately reflects the actual DC efficiency, fewer Amp-hours are provided to the battery. This will mean that the charging time must be increased to achieve the same state of charge (SOC) or the SOC will be less for the same period. For example, it could be that over an eight hour charging cycle at twenty amperes, that a conservative charging profile results in four fewer Amp-hours. This could translate to 5 fewer driving miles or 15 extra minutes of charge time.
[0006] Further, the more conservative the assumption of the DC efficiency, the more inefficient is the entire charging cycle. Part of the reason for this is that there is an energy "tax" associated with charging. Namely, there are pumps and regulators and other fixed auxiliary loads that are operated during charging. The longer that charging takes, the longer this tax is applied which reduces charging efficiency. Typically these auxiliary loads are constant, perhaps around 500W. EV charge times typically are between 4hours and 48hours, but do vary and longer and shorter times are possible. In the 48-hour case, when a charger is using only 90% of the wall power, the charging process could use a couple of kW-hour more since charge time could be extended by 4 hours (1.1 * 48 hours). Therefore, not utilizing full wall power decreases overall system efficiency.
[0007] Some conventional system may employ a DC current sensor in the charging system in attempts to address this problem by closing a regulation loop but this adds costs. In other systems, a Battery Management System (BMS) may use a DC current sensor but delays in communicating sensing current from the BMS to the charger increases a risk of control loop instability.
[0008] What is needed is a charging system that improves utilization of available AC power during onboard charging of energy storage systems of electric vehicles.
[0009] JP 2008-259372 A describes a device for charging a battery that is configured to prevent a battery charging current from exceeding a maximum allowable charging current of the battery. The device comprises a rectifier for rectifying an alternating current into a direct current and a controller to control an amount of power generated by the rectifier.
[0010] US 2008/0197811 A1 discloses a battery charging circuit comprising an AC to DC converter, a charging control switch, and a charger controller. The AC to DC converter provides a charging power to a battery pack. The charging control switch is coupled between the AC to DC converter and the battery pack. The charging control switch transfers the charging power to the battery pack. The charger controller detects a battery status of the battery pack and controls the charging control switch to charge the battery pack in a continuous charging mode or a pulse charging mode according to the battery status. The charger controller also controls the AC to DC converter to regulate the charging power according to the battery status.

FIG. 1 is a general schematic block diagram of an AC current-controlled charging system;

FIG. 2 is a representative control process used in the system shown in FIG. 1;

FIG. 3 is a flowchart of an AC current-controlled charging method; and

FIG. 4 is a flowchart of the charging current establishing step shown in FIG. 3.

an energy access system (130), coupled to the AC power source, producing an input AC current or an input AC power;

a voltage sensor configured to measure a voltage level of the energy storage system (115); and 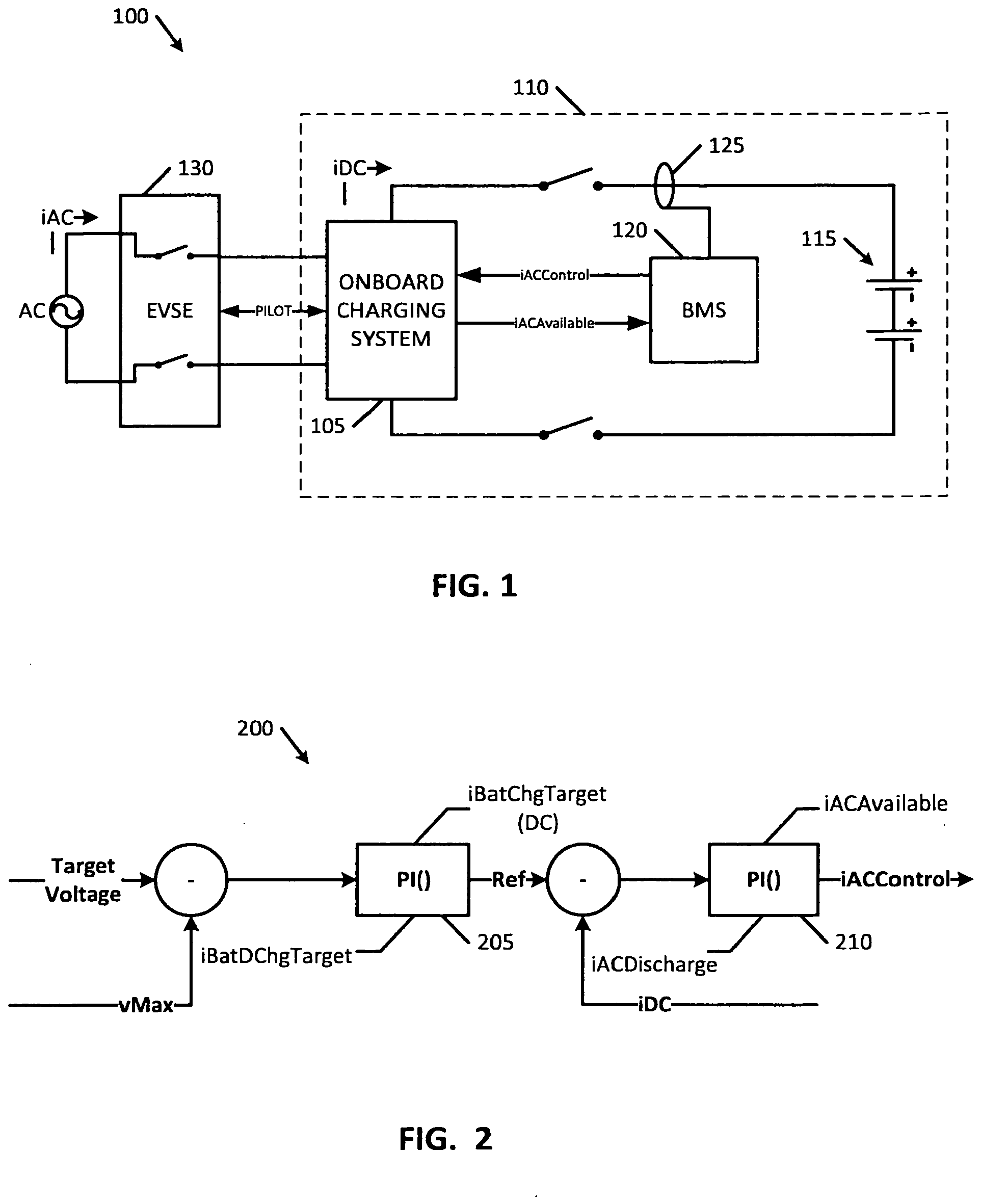 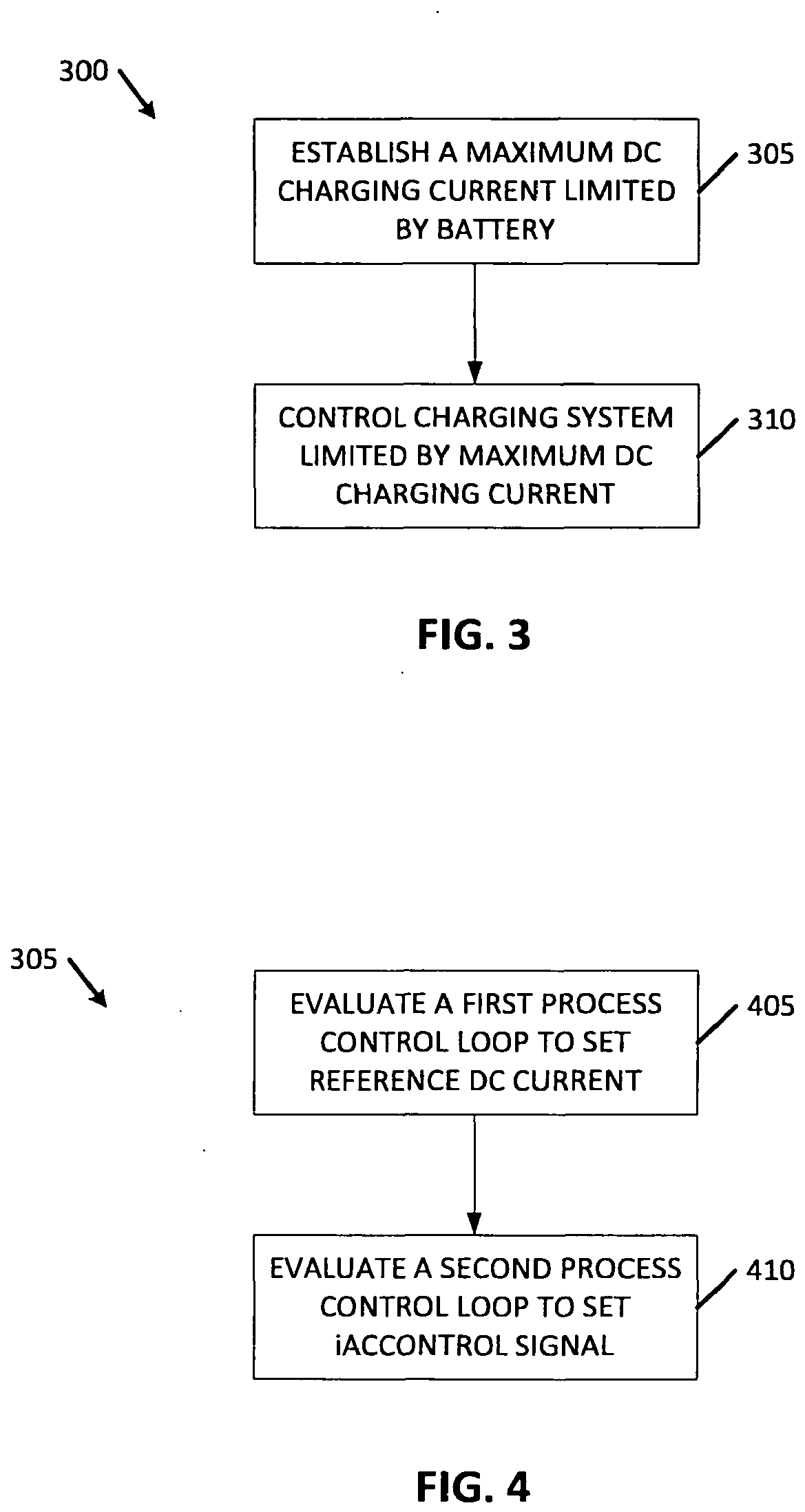