[0001] This invention relates to a tool change device for working apparatus of shearing machines.
[0002] More in particular, the present invention relates to a tool change device for working apparatus of shearing machines especially of the longitudinal type, apt to work on paper, cardboard, plastic films, various coupled materials, aluminium, fabric, non woven, glass fibre, carbon fibre and similar.
[0003] As is known, the shearing machines called "longitudinal" perform the shearing of the material employing multiple and diverse techniques such as, for example, the "scissor", pressure or blade shearing; the different shearing techniques are selected in function of the thickness of the material to be sheared and of the speed of execution of the shearing operation and, therefore, in function of the production needs.
[0004] To perform the shearing operation, said machines employ cutting tools named "knives", defined by circular blades or by single cutting elements mounted on circular discs turnably stabilized respect to a tool holder or blade holder comprising the devices and the means apt to allow the translation of the blade or cutting element during the shearing operative phases.
[0005] The variation of the type of material to be sheared and/or the different production needs, require the change of the cutting tool which is performed through the detachment of the tool thereof respect to the tool holder.
[0006] An example of a prior art tool changer upon which the preamble of claim 1 is based is described in EP-A-1700675.
[0007] In some traditional shearing machines, the tool change operation is performed through a rotation of the tool thereof after releasing and partially extracting it with translatory movement; the same movements shall also be performed for the insertion of the new cutting tool.
[0008] However, said tool change procedure implies some considerable drawbacks related to the need to perform rotation movements respect to a horizontal plane in order to correctly centre the tool respect to the tool holder; a non correct centring implies consequent shearing errors and therefore a low quality final product.
[0009] A further drawback of said tool change procedure consists in the complexity of tool change resulting in not quick change times with the consequent increases in production costs.
[0010] JP6218686 discloses a changing tool device suitable for suppressing the inadvertent stops of a robot during tools separation operation and connection operation of a second unit, disposed on a placing board, with respect to a first unit; said changing tool device is pneumatic driven and has just the function to move a portion of the first unit so as to allow coupling/uncoupling of the first unit with respect to the second unit.
[0011] In other types of shearing machines the tool change respect to the tool holder is performed through the release of a lever forming also the guiding element for the tool thereof.
[0012] In this case as well the drawback connected to the complex, as well as not quick tool change and the consequent production costs can be found.
[0013] A further drawback of the traditional tool change devices consists in the management of the compressed air required for the upwards and downwards movement of the tool respect to the product to be processed; the devices thereof, in fact, according to embodiment cited hereinbefore, require complex paths for the air characterised by a high level of construction accuracy and, thence, very expensive.
[0014] The object of the invention is to obviate the drawbacks discussed hereinabove.
[0015] More in particular, the object of the invention is to provide a tool change device for working apparatus of shearing machines that allows an easy as well as quick tool change not affected by centring and positioning errors.
[0016] A further object of this invention is to provide a tool change device apt to allow a simple and easy management of compressed air for the movement of the shearing components; this with the purpose of allowing a quick connection of the components apt to allow the feed of compressed air to the cutting tool.
[0017] A further object of the present invention is to provide a tool change device for working apparatus of shearing machines suitable for ensuring a high level of resistance and reliability over time and moreover, such as to be easily and inexpensively constructed.
[0018] These and other objects are achieved by the tool change device for working apparatus of shearing machines of the present invention, defined in claim 1, which comprises mechanical means for a quick coupling/centring and extraction and with translatory movement between a tool or blade holder head and a tool holder and means for a direct and quick feed of compressed air.
[0019] The construction and functional features of the tool change device for working apparatus of shearing machines of the present invention shall be better understood from the following detailed description, wherein reference is made to the annexed drawings showing a preferred and non-limiting embodiment thereof, and wherein:

figure 1 schematically shows an axonometric view of a working apparatus of shearing machines provided with the tool change device of the invention;

figure 2 schematically shows a partially exploded axonometric view of the working apparatus provided with the device of the invention;

figure 3 shows a partially sectioned schematic side view of the tool holder provided with the tool change device of the invention.

1. A tool change device (12) for working apparatus (10) of shearing machines, especially of the longitudinal type, apt to work on paper, cardboard, plastic films, various coupled materials, aluminium, fabric, non woven, glass fibre, carbon fibre and similar, characterised in that it comprises a block (14) with the lower front stiffly stabilized with respect to the tool or blade holder head (16) and the upper front coupled with the lower front of the tool holder (28) provided with abutment and centring elements defined by an appendix (34) and by a further appendix (36) formed starting from the lower front of said tool holder and respectively according to a vertical direction and a horizontal direction, with said appendixes developed starting from opposite ends of the lower front of the tool holder (28), said appendix (34) and further appendix (36) showing, respectively, a through hole (38) and a further through hole (40), formed according to a horizontal direction and a vertical direction, said holes being apt to house coupling elements with the block (14) defined by a pin (50) inserted in the hole (38) and by a screw or pivot (56) inserted in the further hole (40), said pin (50) being partially inserted in a duct (42) of the block (14) built coaxially to the hole (38) of the appendix (34) of the tool holder (28), and being provided with a first channel or passage (52) and a second channel or passage (54) reciprocally communicating and orthogonal, with the first passage (52) communicating with a channel (39) formed in the tool holder (28) and the second passage (54) put in communication with the duct (42) of the block (14), inside said block (14) and perpendicularly thereto, there being arranged a connector (44) provided with a through axial hole and a cross hole reciprocally communicating, partially inserted in a further duct (46) formed in the support (15), with the cross hole communicating with the duct (42) of the block (14) and the axial hole communicating with the further duct (46), thus comprising mechanical means for quick coupling/centring and extraction and with translatory movement between a tool or blade holder head (16) and a tool holder (28) and means for a direct and quick feed of compressed air.

2. The tool change device according to claim 1, characterised in that the screw or pivot (56) is inserted in a through hole (48) coaxial to the further hole (40) of the further appendix (36) of the tool holder (28).

3. The tool change device according to Claim 2, characterised in that the block (14) at the bottom is stiffly constrained respect to a support (15) of the tool (16) whereto is stabilized a protection casing (20) partially covering a blade (18) actuated in rotation through the friction action exerted by a counter-blade (22) operated by an electric motor, said blade is stabilized to the support (15) through bars (24) and to the protection casing (20) by means of a plate (25). 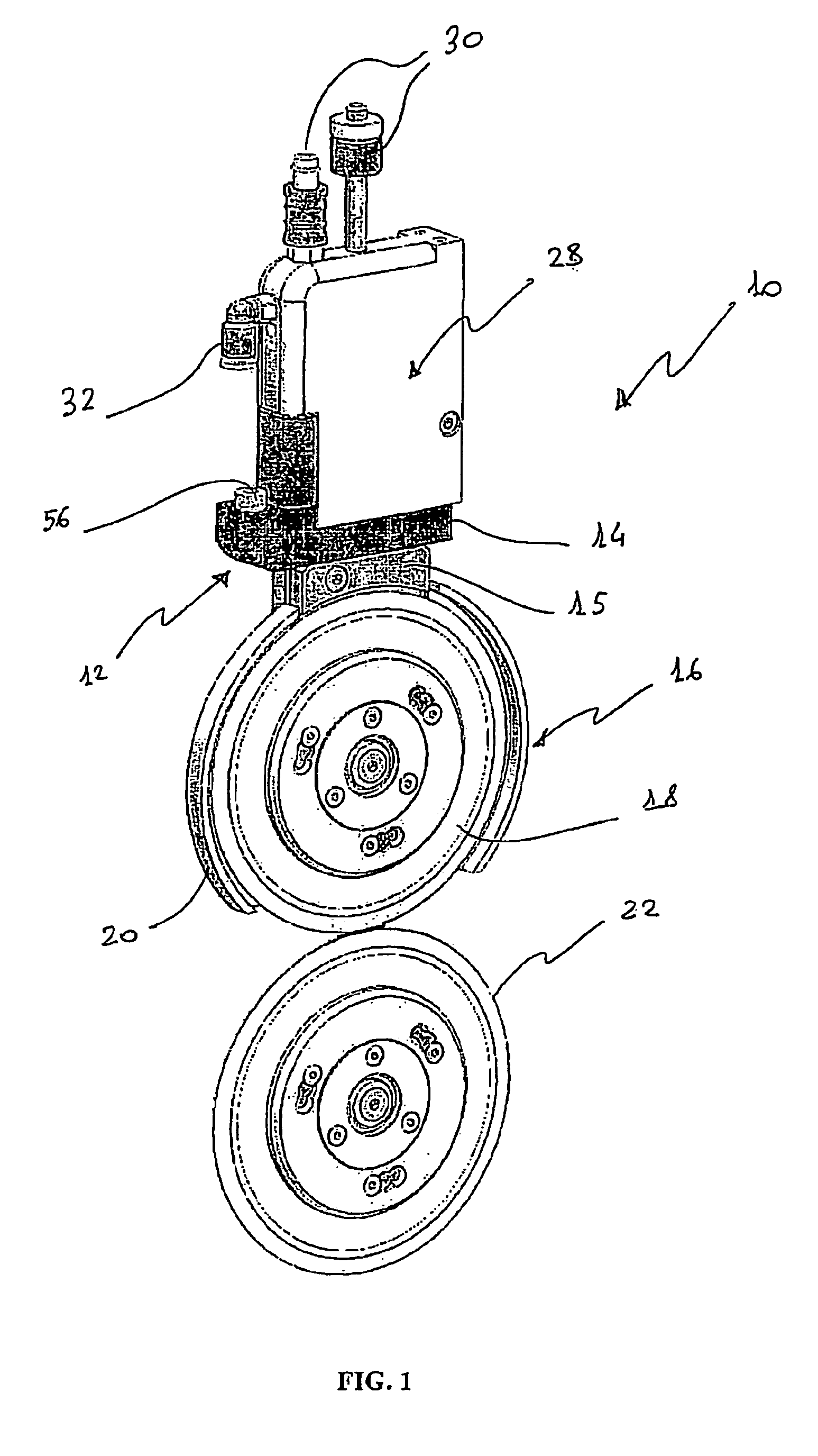 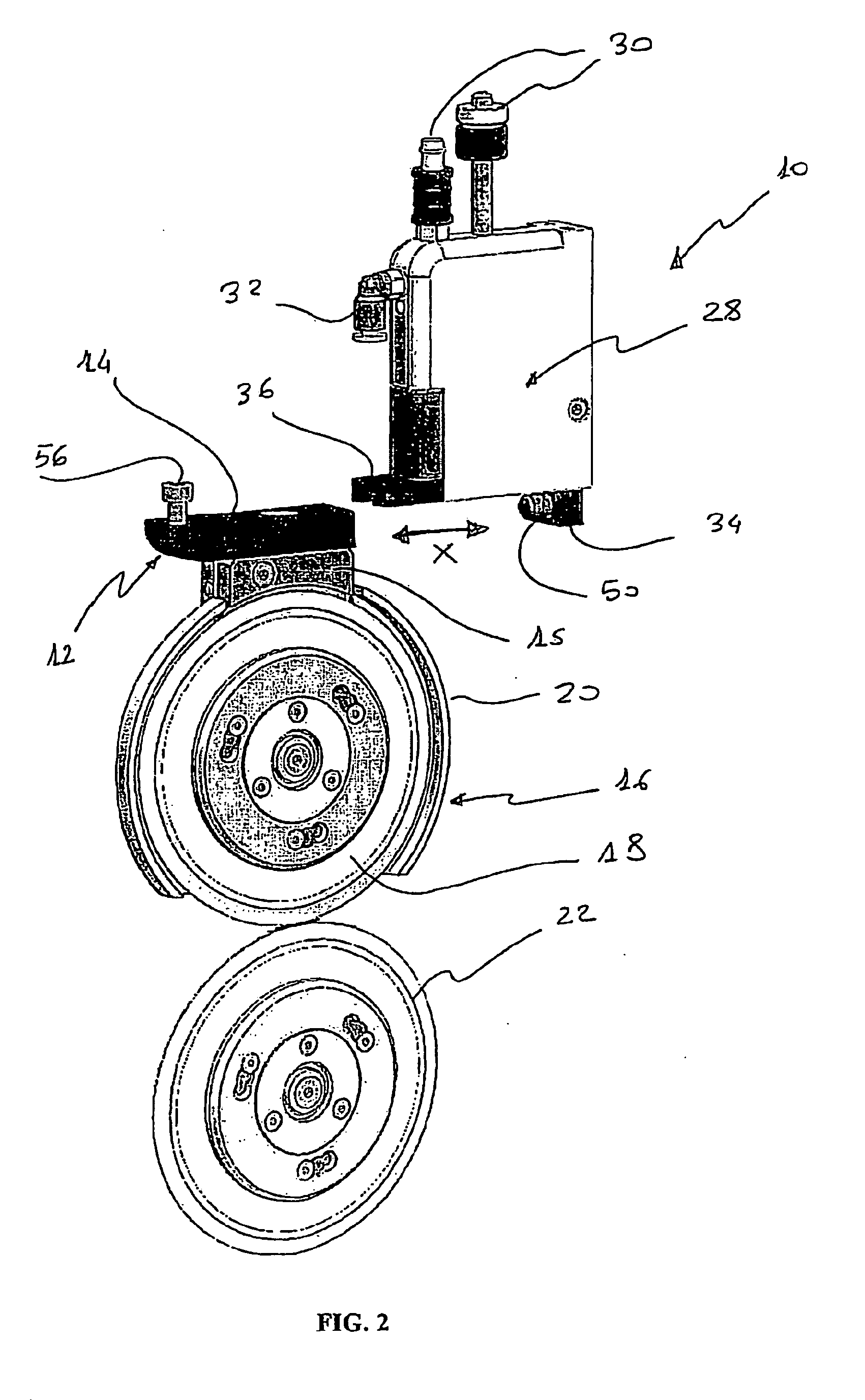 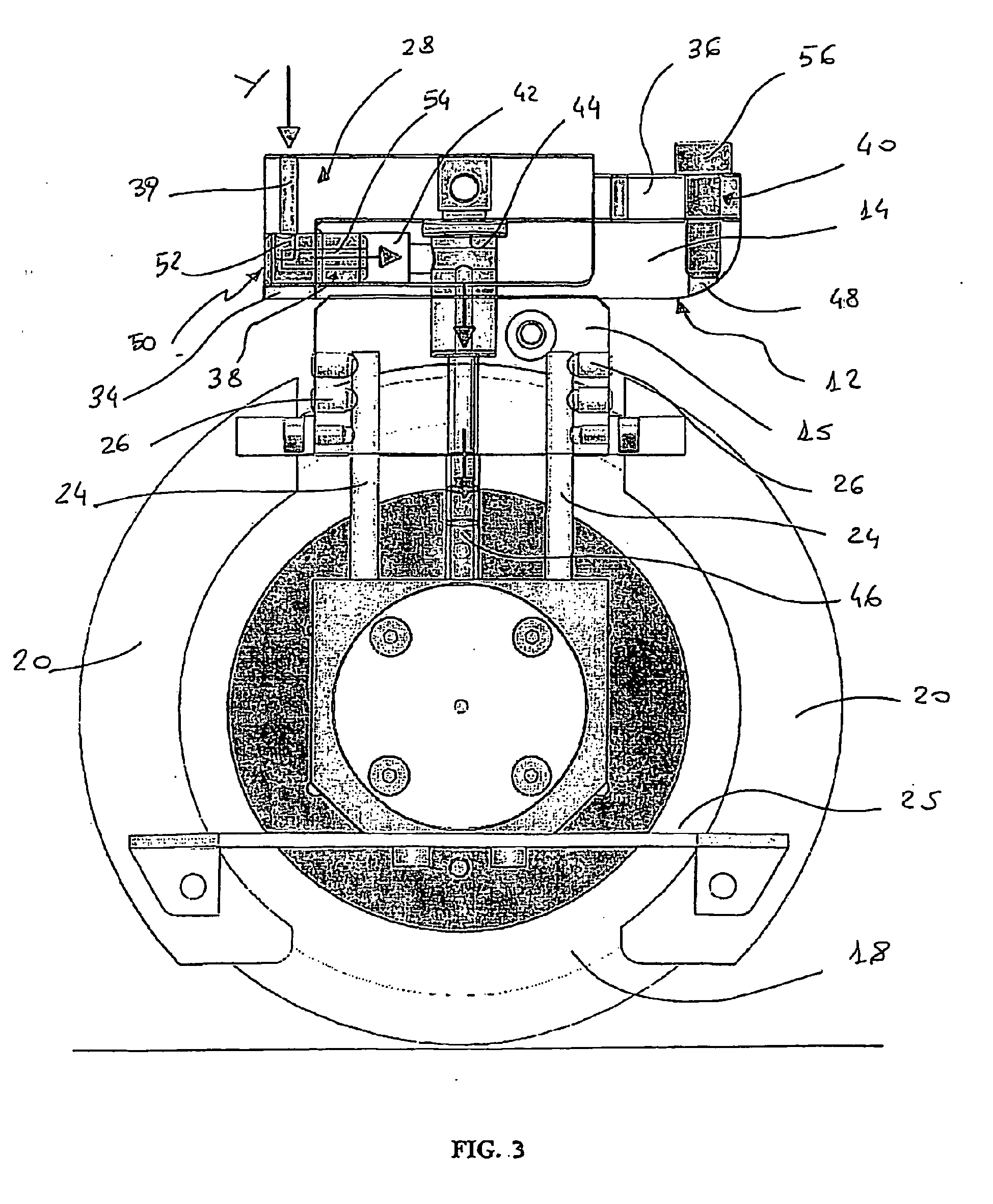