[0001] This invention relates to a fastener to enable attachment of identity tags and other items, in the wider context of managing, identifying and tracking physical assets such as equipment and plant.
[0002] An implementation of the invention is discussed against the background of a telecommunications network although it would be appreciated that it can be deployed in any type of network or system. Indeed, the invention can be usefully deployed for a single item of equipment, plant or other physical item outside of a network or system.
[0003] In a telecommunications network, the sheer diversity of equipment and plant involved, in new as well as in legacy networks, presents a particular challenge for their identification by labelling or tagging. There are a number of known plant-tagging solutions, such as colour-coding, pattern-coding, serial numbers and bar-coding, and radio-frequency identification (RFID); the records components for each such tagging solution are also known in the art. These can be built into the item in question, or else the item can be retro-fitted to carry the necessary identification information.
[0004] For example, the use of RFID tags to identify cables is ideal in a crowded setting such as in an exchange or in a cable joint, so that there is less need for an engineer to detect and identify this by reading the serial number on a tiny handwritten label. However, retrofitting RFID tags on certain types of equipment and plant present problems. The curved, cylindrical, surface of elongate cables is not an ideal base or support for an RFID tag: this is particularly so in the case of cable of small diameter. This is due to the fragility of the RFID component itself, the difficulty in reading the data contained therein, or physical interference or hazard from a projecting RFID component fastener or attachment. The antenna and the application-specific integrated circuit of passive RFID tags positioned on curved reading planes such as the surface of a cable or pipe presents a reduced effective read/write area to the scanner or reader, compared to a tag positioned on the flat surface which present a larger effect surface area.
[0005] Known solutions include "cable tags" from Synometrix Integrated Technologies of Taiwan, taking the form of a "secure RFID zap strap or tie-on RFID tag", which essentially comprise an RFID tag placed on a flap having a flat surface, which is in turn attached onto a conventional cable tie (http://www.synometrix.com/RFID cable tag specification.shtml, referred to 25 October 2010). As is well known, a cable tie comprises a gear rack arrangement which prevents loosening once engaged; the loop formed by the cable tie tape can only be pulled tighter.
[0006] Such cable tags may be used to identify cables, but are not ideal, as the RFID component flap projects disruptively from the cable resulting in snagging, and the cable tie tape itself could slide along the cable and be "lost" if it is not sufficiently tightly fixed. It is also susceptible to tampering. Its propensity to be over-tightened (e.g. to discourage sliding) results in a high likelihood of imparting a crushing force on the surface of the cable in a radial direction. This makes such cable tags problematic when used optical fibre cables of small diameter which comprise an arrangement of optical fibres or fibre units around a central strength member. An over-tightened cable tie may adversely affect the performance or even physically injure such cables where the optical fibres are positioned immediately under the external sheathing due to the crushing force imparted at the point of contact.
[0007] It is therefore desirable to attach records components such as an RFID tag onto an object or physical item in a way which addresses the above issues.
[0008] In a first aspect of the invention, there is provided a fastener for use with an elongate member having a longitudinal axis, the fastener comprising
a housing, and
an arm for looping about the member, the arm being attached to the housing,
wherein the looped arm is configured to urge against the member along a plane oblique to the longitudinal axis of the member during use.
[0009] The fastener may be considered to refer to the arm of the device, as well as more generally to the entire device. In the main, the arms are configured to enable them to resiliently bear upon the cable in a way so that the loops around the cable describe a plane which is slanted or oblique to the longitudinal axis of the cable. This removes or reduces the compressive force placed axially upon the cable by use of a cable tie fastener, by distributing the frictional force required to attach the fastener to the cable surface over a bigger area by obliquely urging the arms against the cable.
[0010] In various embodiments, the arms may comprise pre-formed loops into which the cable can be inserted, or else the arms may be open (i.e. attached to the housing or fastener at only one end) so that the user forms the loop around the cable during use. The force urging the fastener arms is preferably obtained by a biasing force from means which are provided within the structure of the fastener, or else formed when the user loops and secures the loops about the cable or such member. This force can stem from the structure and/or materials from which the arms (or parts thereof) are made, or else may be provided by means external to the arms in the form of e.g. springs.
[0011] In a tamper-proof embodiment, the arms are configured to be secured using a closure arrangement which is cannot be opened again after closing, without such an attempt being detectable e.g. by breaking.
[0012] In a second aspect of the invention, there is provided a method of fastening a records component to an elongate member having a longitudinal axis, comprising
[0013] The invention will now be described, by way of example only, with reference to the following drawings in which:

Figure 1 shows a view of an embodiment of a fastener of the invention,

Figure 2 shows a view of another embodiment of the fastener in an open position,

Figure 3 shows the fastener of Figure 2 being attached to a cable,

Figure 4 shows another view of the fastener of Figure 2,

Figures 5A and 5B are schematic views of embodiments of the fastener,

Figure 6 shows a further embodiment of the fastener, and

Figure 7 is a schematic view of yet another embodiment of the fastener.

1. A fastener for use with an elongate member having a longitudinal axis, the fastener comprising
a housing, and
an arm for looping about the member, the arm being attached to the housing,
wherein the looped arm is configured to urge against the member along a plane oblique to the longitudinal axis of the member during use.

2. A fastener according to claim 1 including biasing means to urge the looped arm against the member.

3. A fastener according to claim 2 wherein the biasing means is provided along the length of the arm.

4. A fastener according to claim 2 wherein the biasing means is formed by looping the arm about the member a number of times.

5. A fastener according to any one of claims 2 to 4 wherein a section of the arm is configured to serve as the biasing means.

6. A fastener according to any preceding claim wherein the arm includes bristles.

7. A fastener according to any preceding claim wherein the arm is attached at one end to the housing, the fastener including a closure for securing an unattached end of the arm while looped around the member.

8. A fastener according to claim 7 wherein the closure comprises a set of interlockable prongs.

9. A fastener according to claim 7 or claim wherein the closure is arranged to break upon being opened after having been closed.

10. A fastener according to any preceding claim wherein the housing is arranged to house a records component.

11. A method of fastening a records component to an elongate member having a longitudinal axis, comprising

- looping an arm of the fastener about the member, and

- causing the arm to urge against the member along a plane oblique to the longitudinal axis of the member during use. 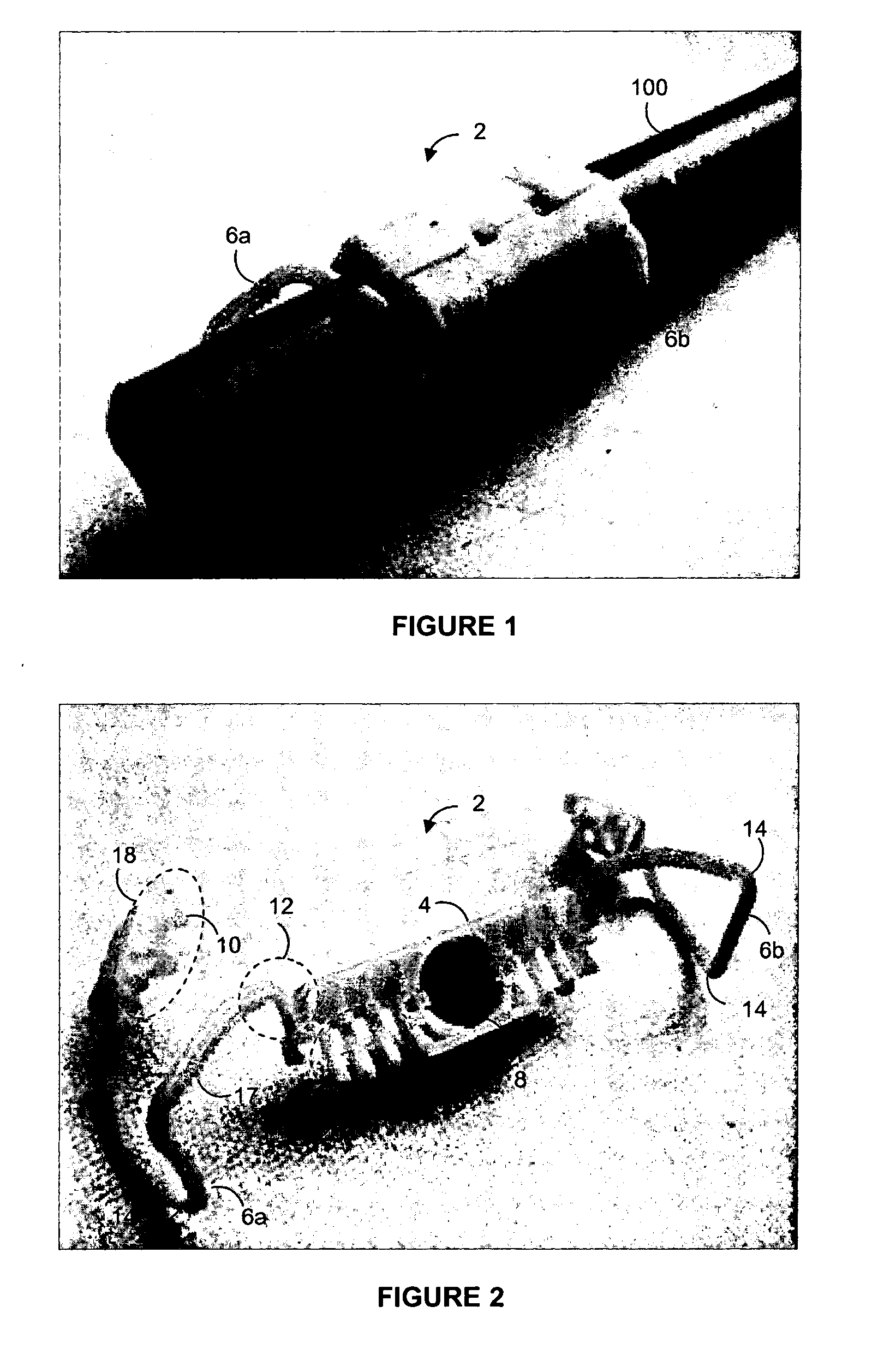 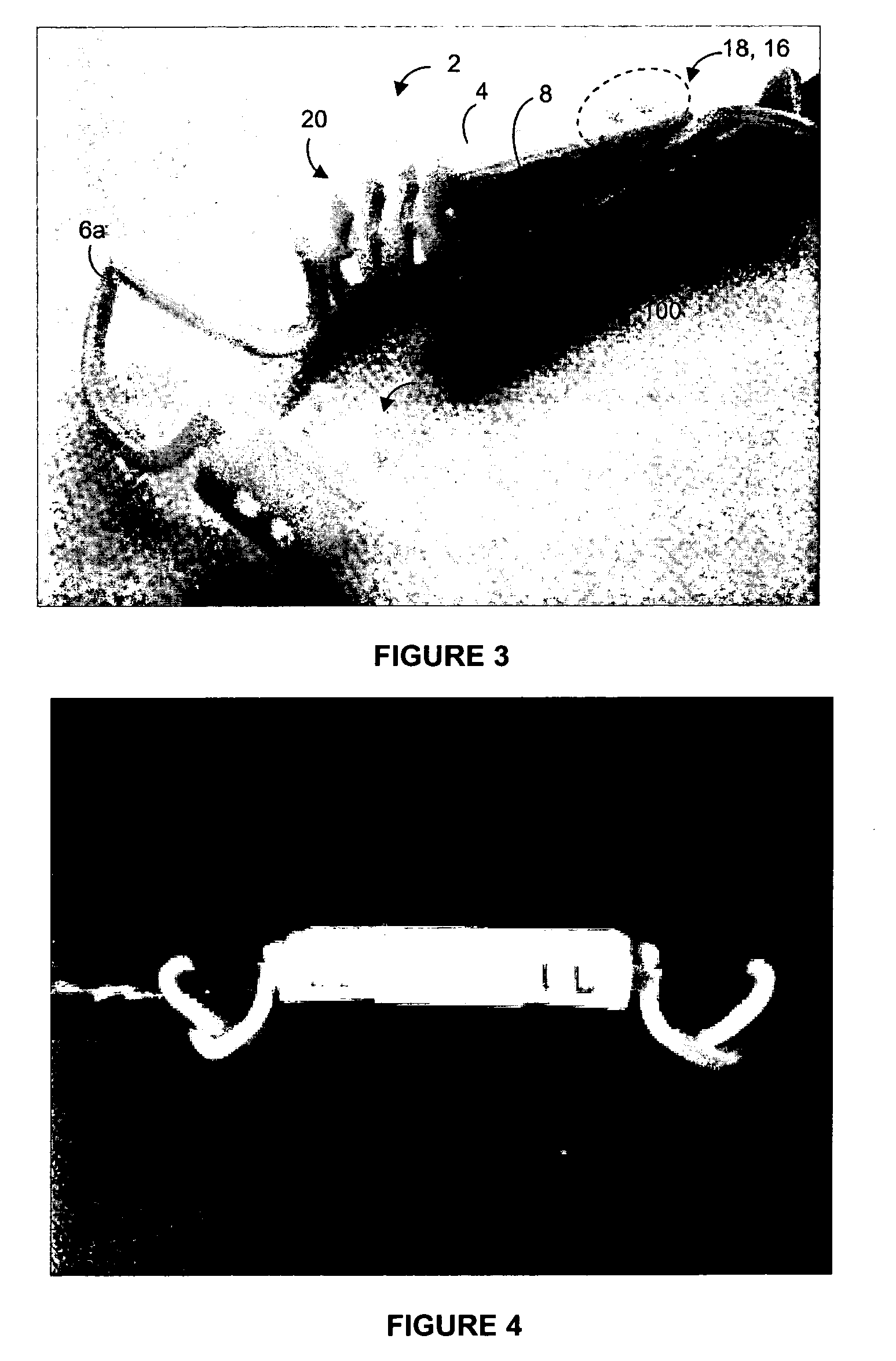 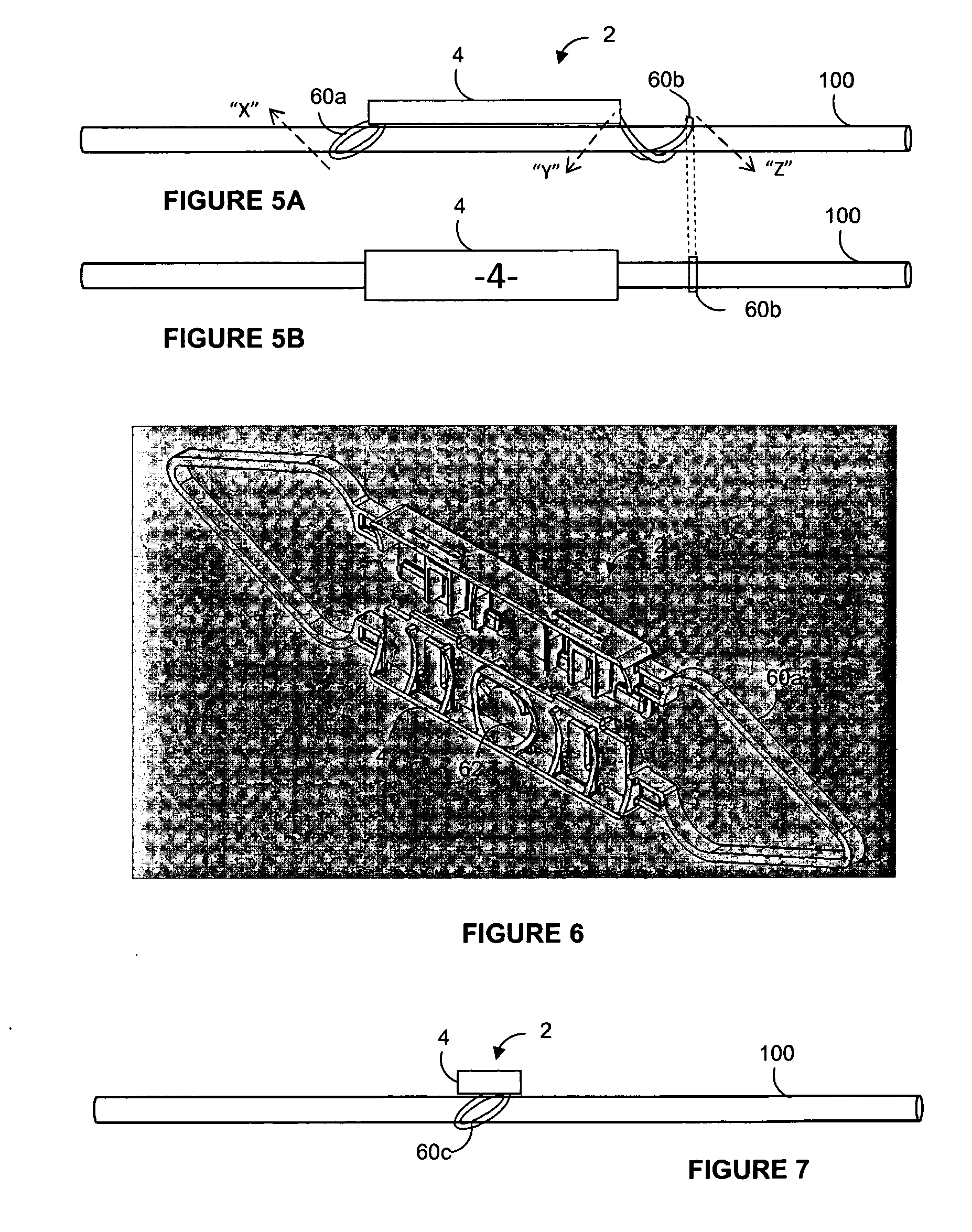 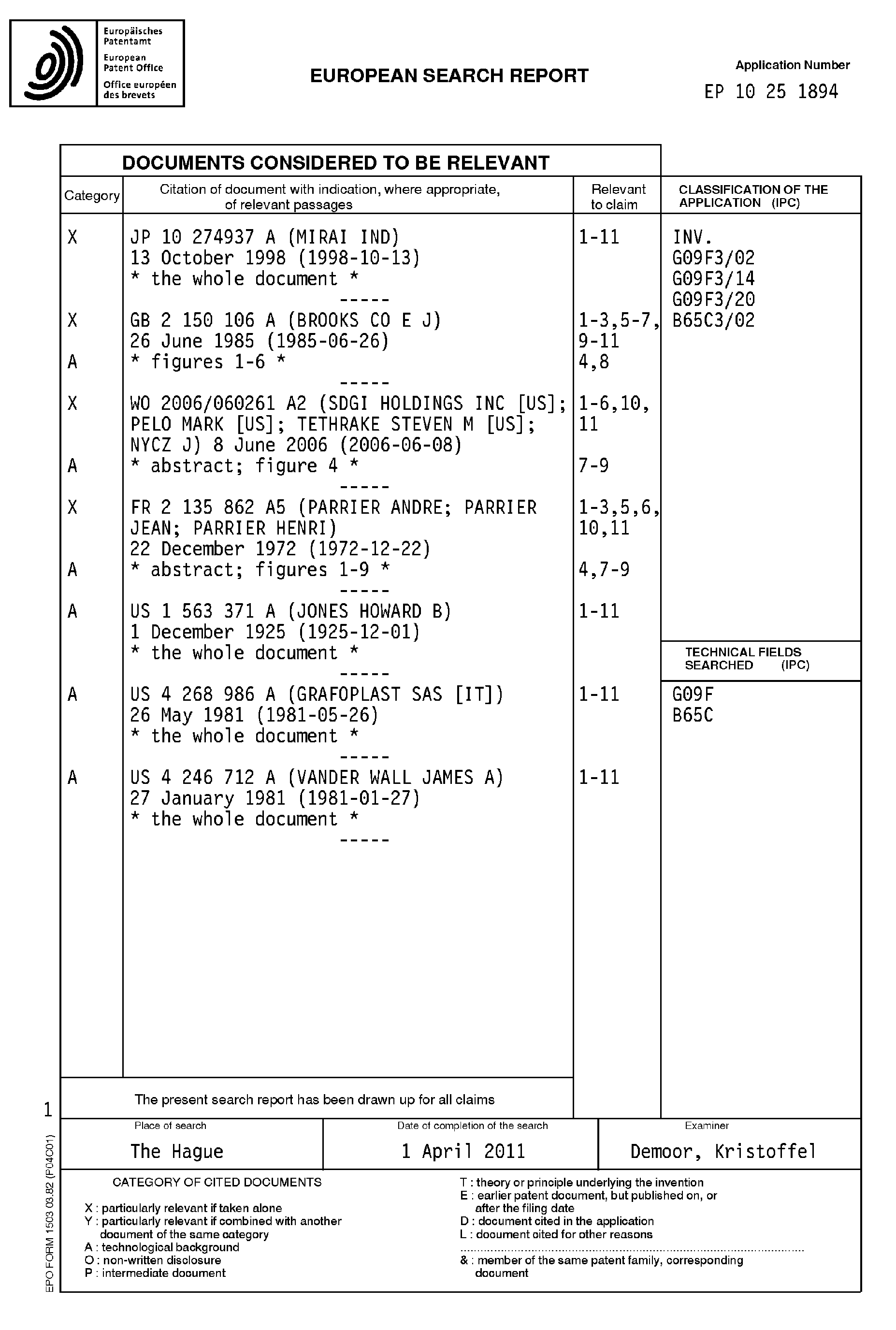 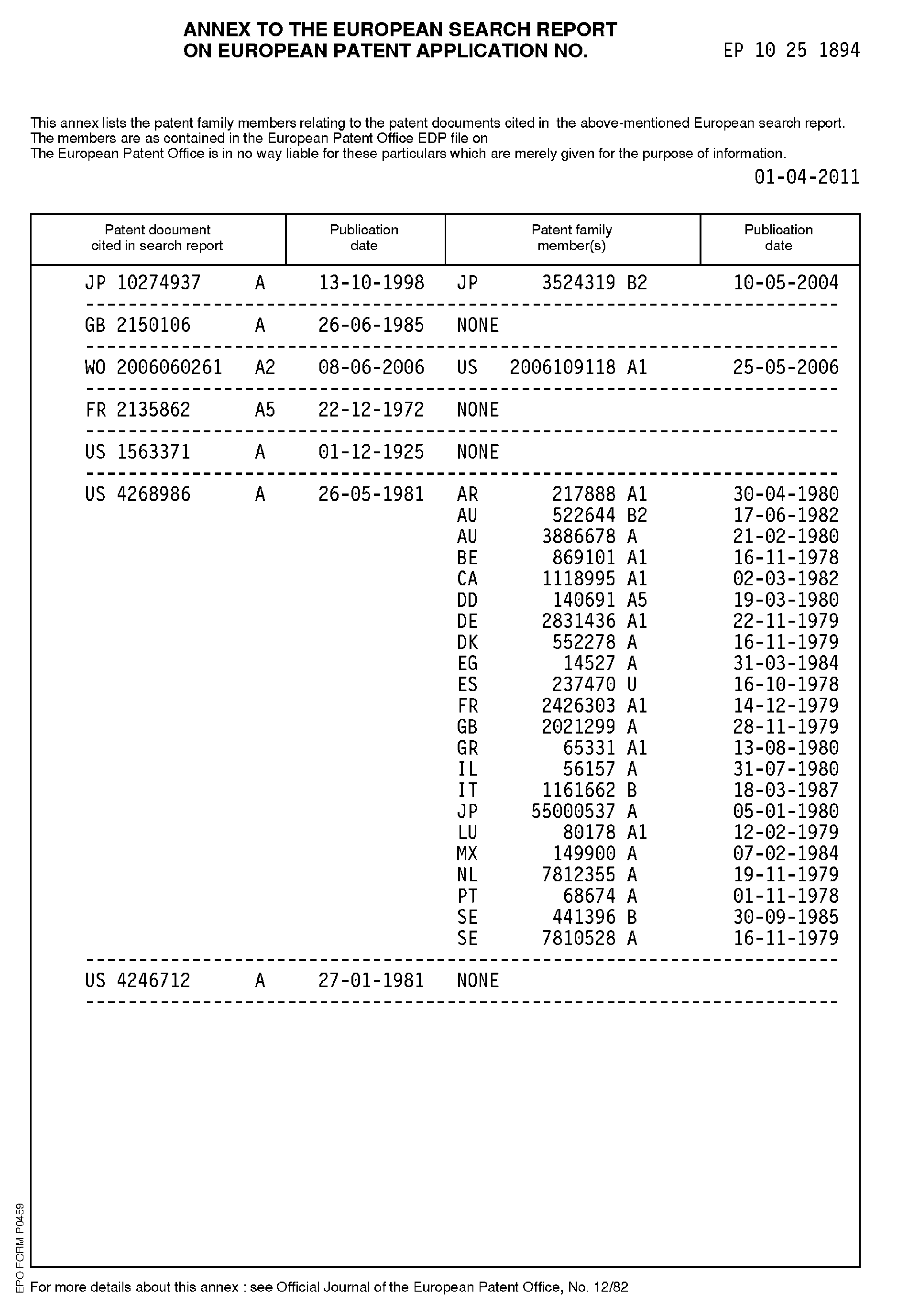