[0001] This invention relates to underground mining and in particular, to the activity which needs to be carried out in the early stages of developing an underground mine.

[0002] Modern large block cave mines require a significant time to develop and a very significant early investment. Both of these factors make their financial success in terms of net present value extremely sensitive to the speed at which they can be brought on stream. Deep cave mines require shaft access and the development of this shaft access forms the initial part of the mine development and therefore is directly on the project critical path i.e. until the initial shafts are completed no other underground development activity can be commenced.
[0003] After the initial shafts have been sunk, tunnels can be launched from the shafts in an appropriate pattern for block cave mining and the material excavated in the tunnelling operation transported to the surface through the shafts. The shafts must be equipped with a material handling unit capable of removing material excavated during tunnelling and subsequently from the operating mine. Conventionally this system is installed after the shaft sinking operation and before tunnel launch which causes significant delay in the mine development project. By the present invention, such delay can be avoided or much reduced by establishing a material handling unit within the shaft during formation of the shaft and using that system for transport of material excavated during the subsequent tunnelling operation.
[0004] Document JP 2001159293 relates to a shield excavating machine and a method of excavating that allows changing the direction of excavation in an economic, quick and safe manner, the shield excavating machine comprising a parent shield tunnelling machine and a child shield tunnelling machine that is housed in a spherical rotating body.
[0005] Document US 3,582,138 relates to a system for forming an excavation in rock in the form of a doughnut-shaped generally cylindrical annulus or toroid having a core of substantial size within which are located one or more access shafts.
[0006] Document US 2005/0004416 relates to a method of constructing a stratum disposal site of radioactive waste matter and underground galleries such as mountain tunnels by using a pneumatic transfer system, and to a method of performing stratum disposal of radioactive waste matter.
[0007] Document US 2,937,773 discloses skip hoists adapted primarily for shaft-sinking purposes in connection with mining operations. A skip hoist and cable guides are provided that allow mechanically guiding the skip and ensuring protection against dropping of the skip should a hoisting cable break during descent or raising of the skip.
[0008] Document GB 2260350 relates to a method of sinking a mine shaft comprising the steps of excavating and lining the shaft from a sinking stage and, at substantially the same time, simultaneously equipping previously excavated and lined zones of the shaft with an equipping stage which is located above the sinking stage and which follows the sinking stage down the shaft.
[0009] Document US 4,725,164 discloses a method of excavating a storage complex in rock for storing radioactive material or other harmful material.

[0021] In order that the invention may be more fully explained, one particular embodiment will be described in detail with reference to the accompanying drawings in which:

Figure 2 is a vertical cross-section through the shaft sinking system;

Figure 3 is a vertical section through an upper part of the system;

Figures 4 and 5 are horizontal cross-sections through the upper part of the system shown in Figure 3;

Figures 6 and 7 illustrate the construction of a pair of skips incorporated in the system; and

Figures 8 to 16 illustrate diagrammatically the manner in which a tunnel or tunnels may be launched outwardly from a shaft.

[0042] As the shaft boring machine 21 sinks down and approaches the level at which a station is to be formed pilot drills mounted below the bolting deck 62 drill off a brow for the station as shown in Figure 10.

[0045] The holes 65 for the waste bypass channels are charged and blasted to form the channels 66 and then a top slice 67 of the station is blasted in stages. The shaft boring machine is climbed out above the station level after each charging as shown in Figure 13 and the blasting is carried out employing electronic detonators to minimise the maximum instantaneous charge and thereby concussion. The station is divided vertically into approximately 2.5m high slices 67 for ease of support with handheld equipment.

[0046] The shaft boring machine 21 is lowered to bring the bolting deck 62 level with the first excavated station slice as shown in Figure 12. The backs and walls of the first slice 67 are shotcreted and bolted and waste is removed by means of slushers 71 mounted on the bolting deck as shown in Figure 15, scraping back into the waste bypass channels to bypass the dust shield 70. The shaft boring machine cutter head 23 is run intermittently to load out waste via the skip system.

[0047] Successive station slices 67 are blasted out and the walls shotcreted and bolted as shown in figure 16.

[0048] The shaft boring machine carries on sinking below the excavated station. More specifically, the bottom of the shaft may be extended downwardly below the floor of cavern 81 to form a well 89 (Figure 8) in which the transfer station 33 of the material handling unit can be located. The bins or hoppers 34 of the material handling unit can thus be located in the well below the floor of the cavern and the skips 36 lowered into the well to receive material dropped into the bins from the conveyor 67.
[0049] The boring head 21 of the shaft boring apparatus may be completely or partially salvaged by removing parts and hoisting them through the heavy lift compartment of the shaft prior to the tunnel launching operations. However, this equipment is very large, typically weighing in the order of 1800 tonnes, and salvage may be uneconomical in a project in which the operating costs may exceed $1,000,000 per day. In these circumstances part or the whole of the boring head may be left at the bottom of the hole and buried prior to tunnel launching operations.
[0050] The illustrated equipment enables very significant savings in mine development time. However, this equipment has been advanced by way of example only and it may be modified considerably. For example, although maximum benefits can be achieved by assembling and operating a tunnel boring machine for tunnelling operations, this is not essential and it would be possible to launch tunnels by conventional drilling and blasting techniques. Similarly, it would also be possible to modify the shaft boring equipment or to employ a drill and blast technique instead of a mechanical cutting head.

1. A method of developing an underground mine, comprising:

forming a mine shaft by excavating earth from beneath a galloway to form a hole (19) extending downwardly from an earth surface region;

wherein the material handling unit (22) comprises one or more skips (36) moveable up and down on skip guides within the hole (19), and

wherein the material handling unit (22) comprises a transfer station (33) at which material excavated in the formation of the shaft is transferred into the skip (36) or skips (36) for transport to the surface region and the transfer station is moved downwardly as excavation progresses,

characterised by the steps of:

forming said mine shaft by excavating earth from beneath a galloway (31) and said material transfer station (33) is mounted on the galloway (31),

locating the galloway (31) and the material transfer station (33) at a bottom part (80) of the mine shaft;

launching one or more tunnels (82) from the bottom part (80) of the mine shaft, and 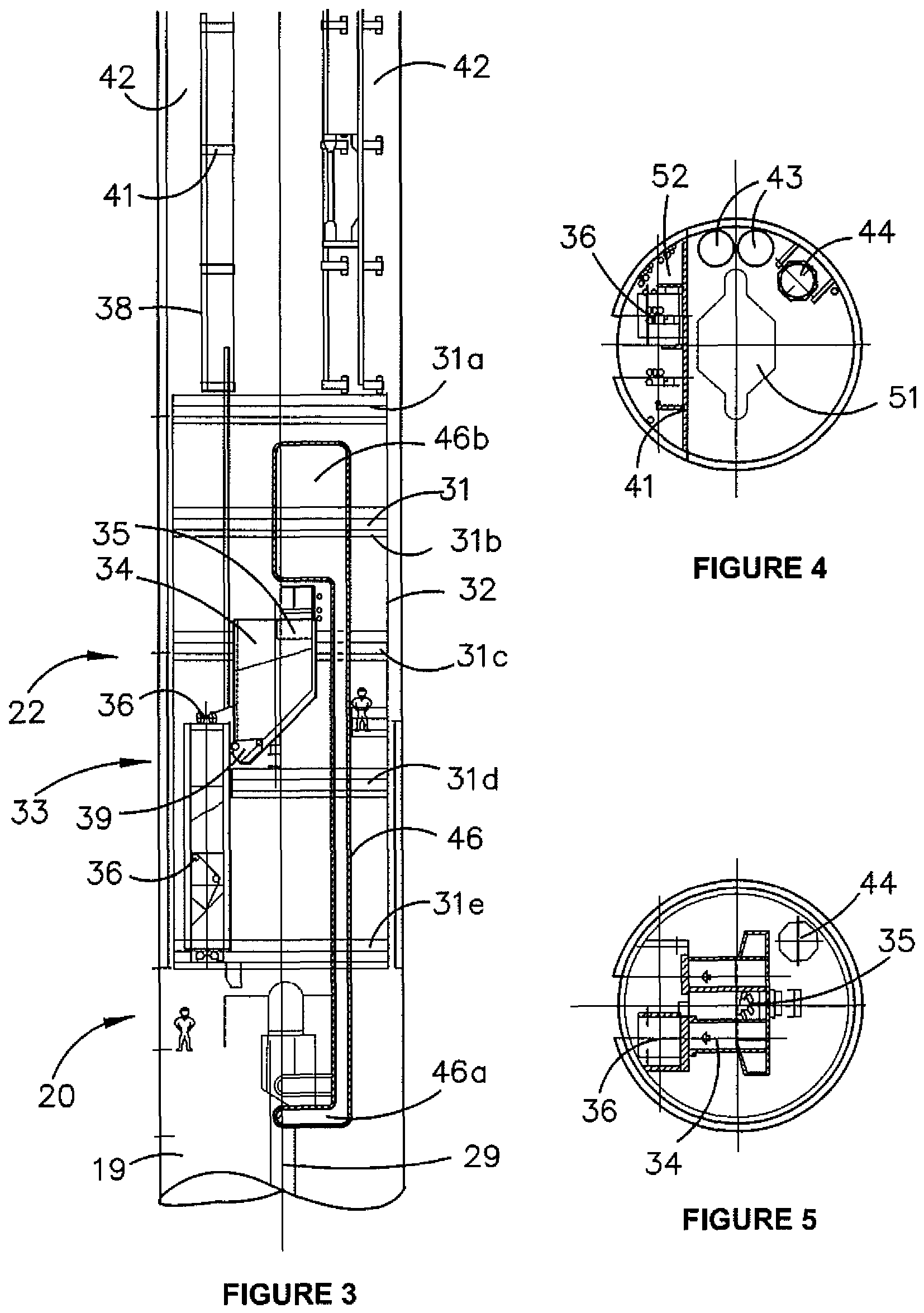 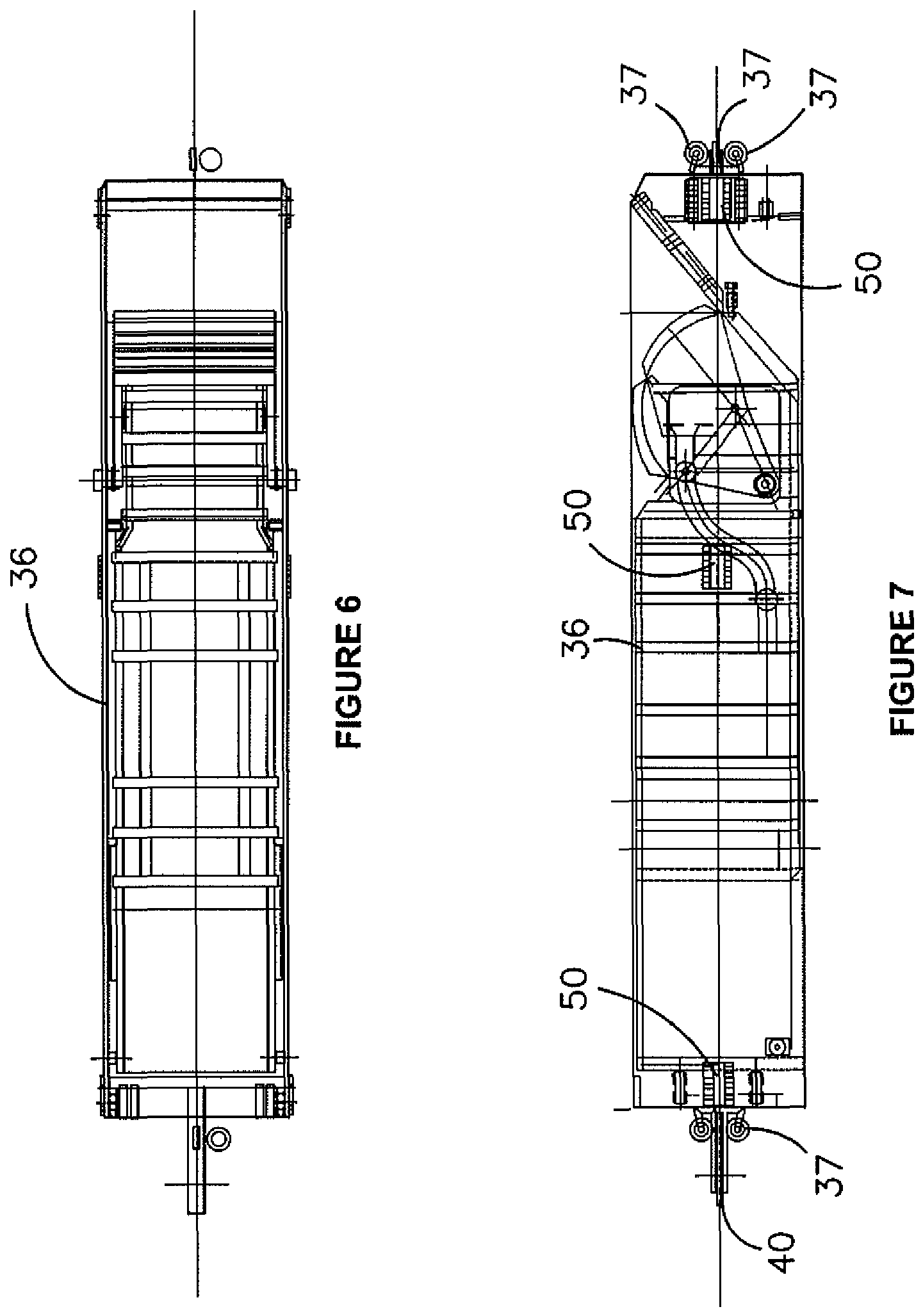 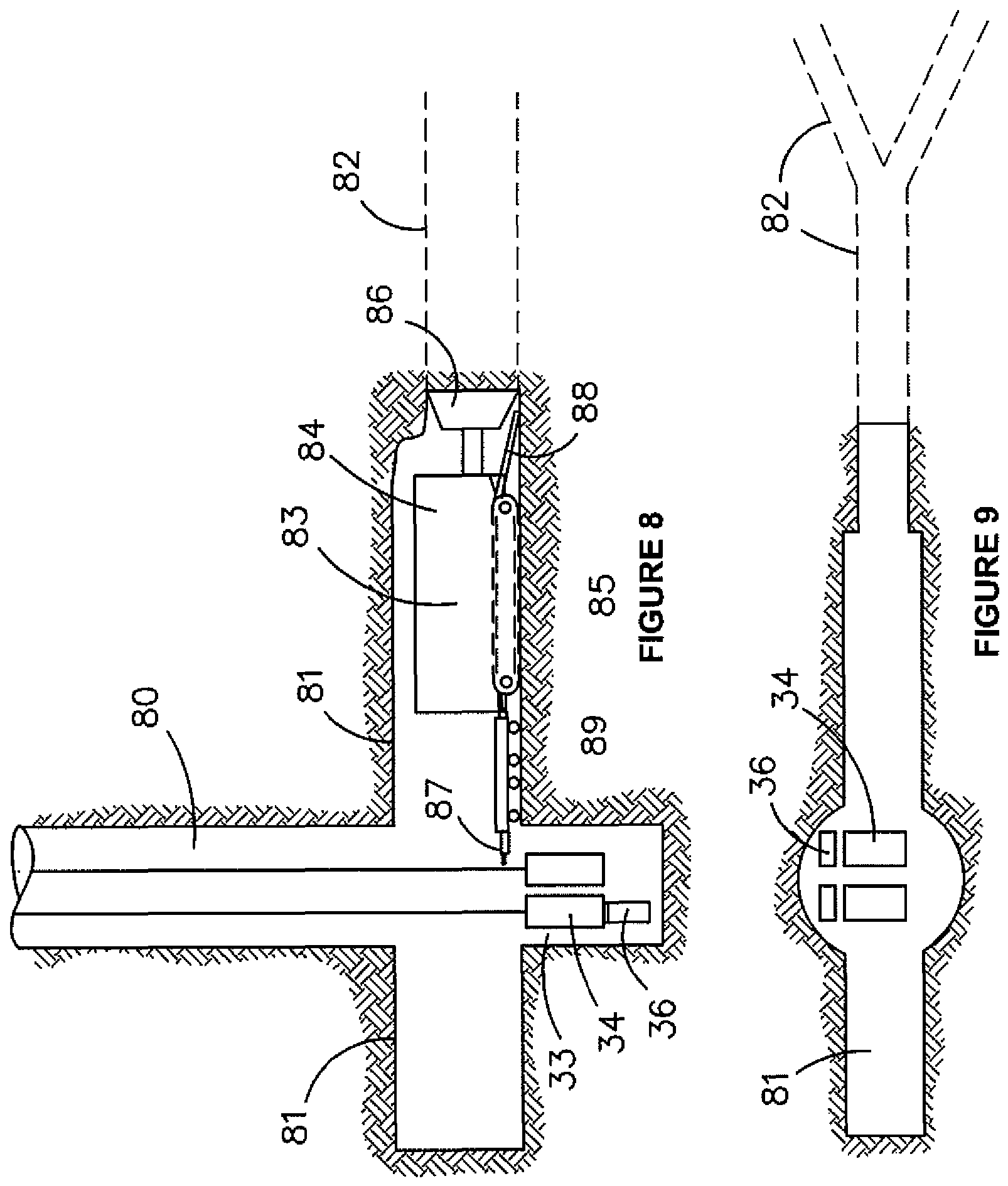 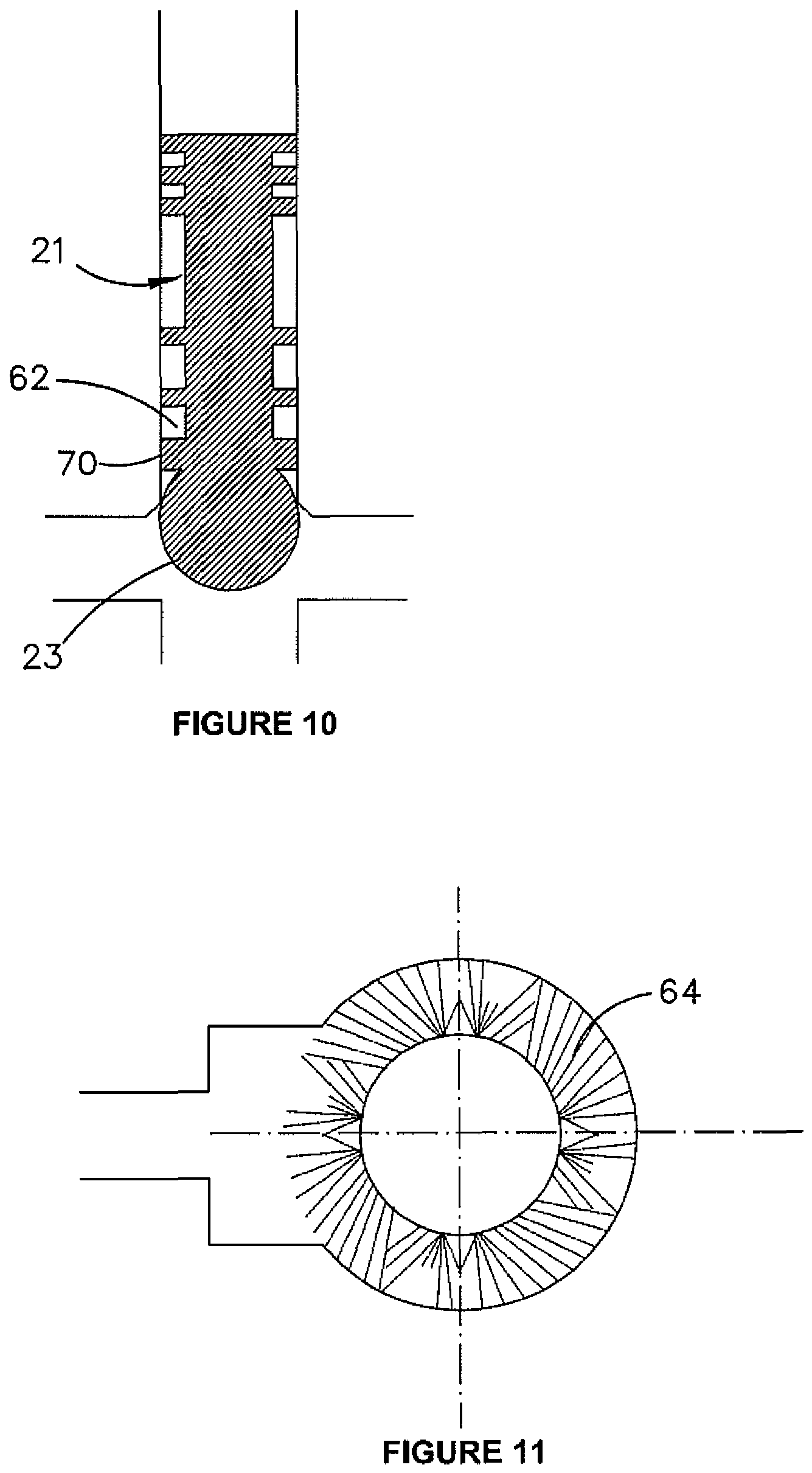 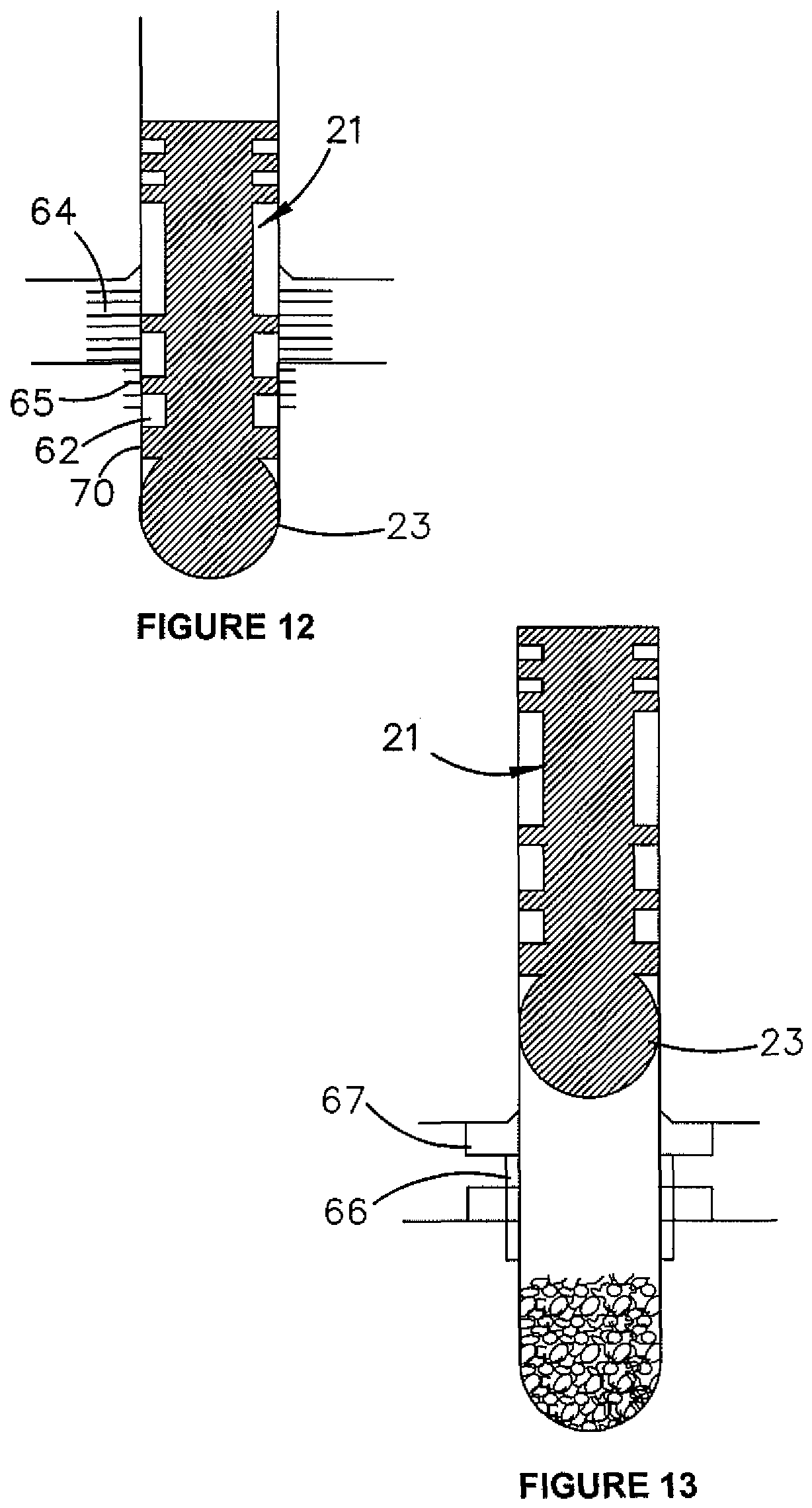 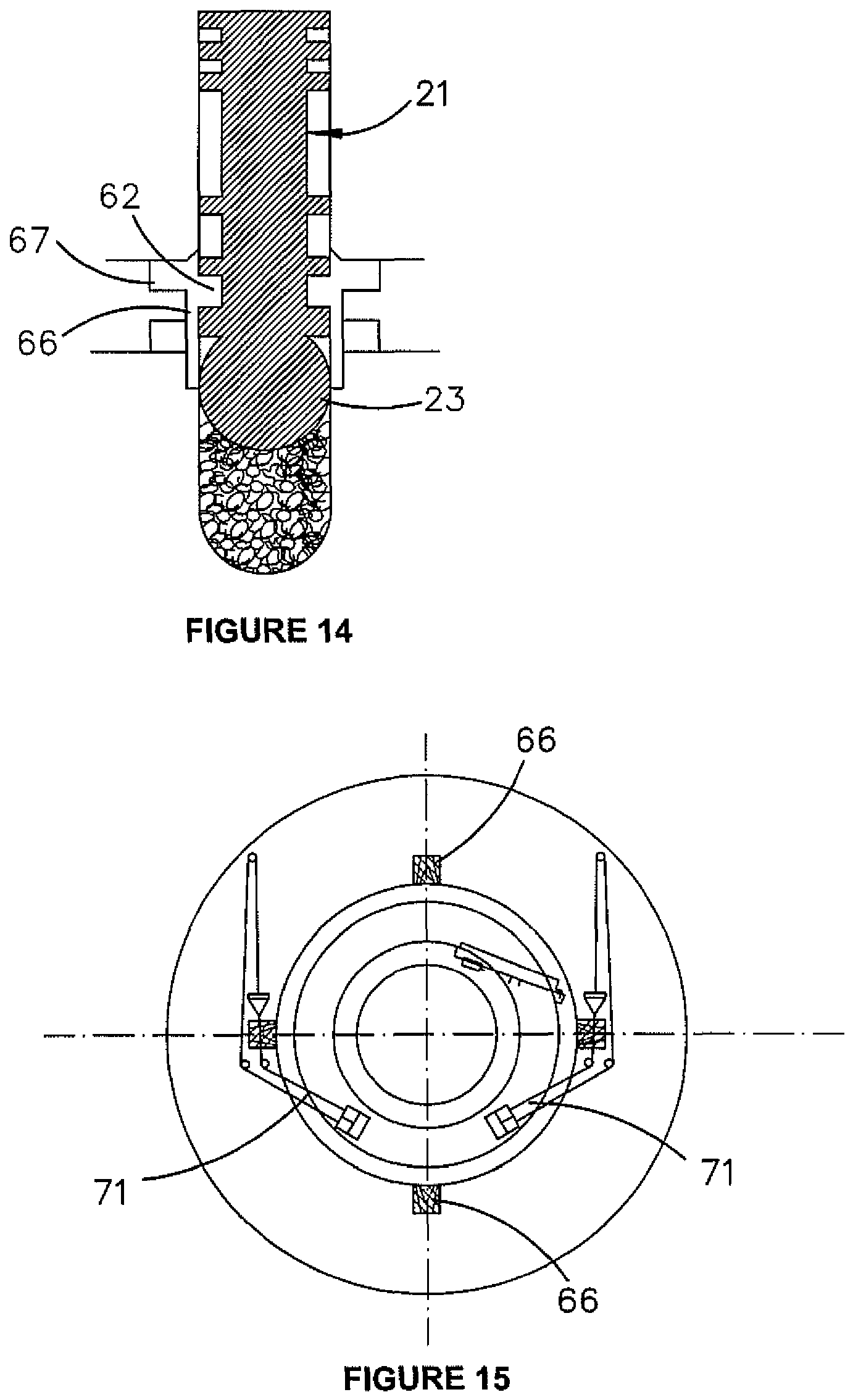 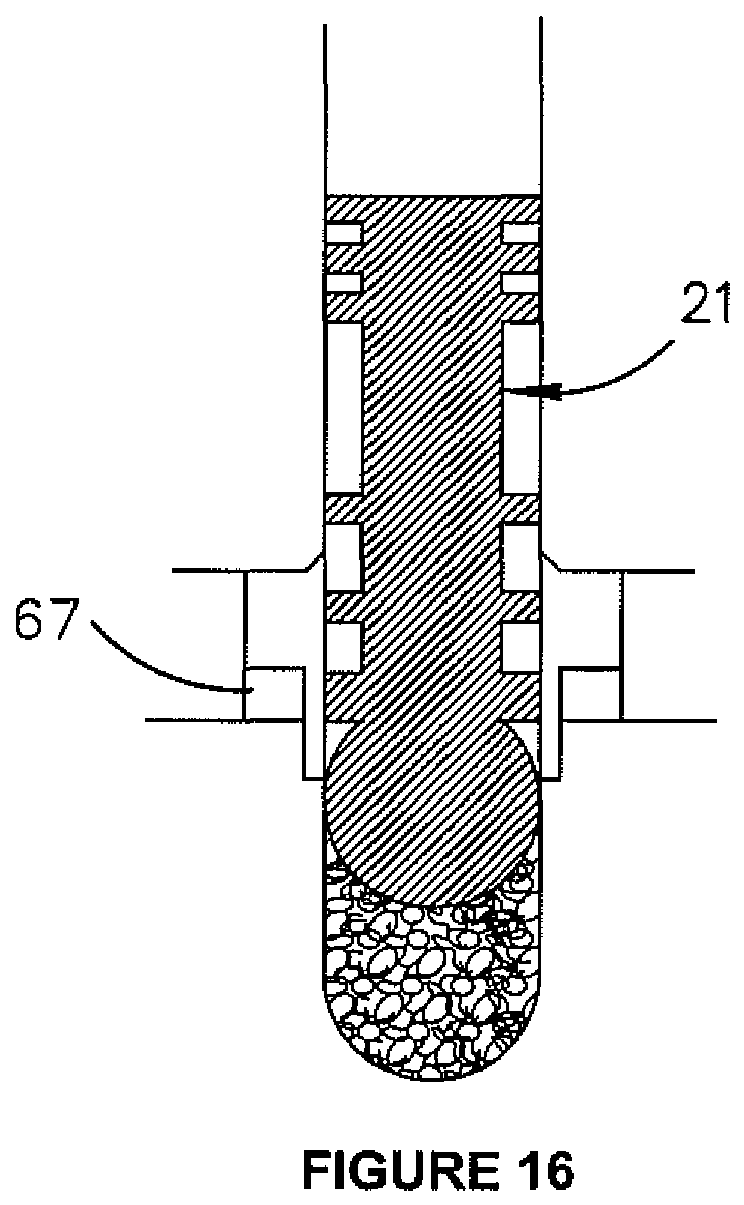