[0001] The present invention relates to an orthopedic plate, which is configured for the fixation of a bone or bones of the foot, hand or wrist in particular following a procedure for fusion of adjacent segments or reconstruction such as various osteotomy procedures.

[0012] According to the invention, the osteotomy plate system according to claim 1 is provided.
[0013] In accordance with the present invention an orthopedic plate is provided which can be used to good advantage in an osteotomy. In a first embodiment, the plate has a footprint that is a modified rectangle having a first end with rounded corners, and a longitudinally opposing end with a cutting edge that may include a taper or a crescent shape. Either two or three of the four sides of the plate, including both long sides and optionally the proximal end have a raised edge or rails which acts to stabilize the plate, and which is connected with a thinner flat web of material that includes one or more holes for screws or pins. At the cutting end, the rails may terminate in pointed insertion tips which are joined by the web that also includes a tapered cutting surface or the plate may simply include the tapered cutting edge. In a second embodiment, the plate has a simple bar-like footprint with a first end tab and a second end tab extending along the longitudinal axis of the plate and with narrowed waist sections between the tabs. At the first end tab, the plate includes a first portion that is inserted into cancellous bone. This portion includes a rounded or tapered chamfered edge that promotes insertion into the bone. At the second end tab, the opposing portion includes a through hole so that the plate can be fixed to an extramedullary portion of an adjacent bone segment. Optionally, the plate includes a compression or translation slot that extends in a direction and causes compression toward a through hole in the opposing cancellous tab. The width of the plate decreases between the holes to allow for bending if desired. In other embodiments, the footprint may by more "organic" in shape, with a rounded tapered insertion surface, a midsection that flares to accommodate an angled screw hole and a rounded rear section that includes a second perpendicular screw hole. In a further modification of this plate, the plate advantageously includes an angled hole with a shroud that protects the soft tissue from the head of the screw and which aids in optimal compression of the posterior fragment for certain procedures.
[0014] The invention can be used in a variety of indications including for example, calcaneal osteotomies Dwyer osteotomy, cotton osteotomy, isolated TMT fusion, Navicular fracture, Evans osteotomy and metacarpal rotational osteotomies, or intrarticular osteotomies or hand and wrist realignment osteotomies. Other applications which could use the present invention include first and fifth metatarsal chevrons, translational osteotomies, and closing wedge osteotomies.

FIG. 1a is a medial view of a foot with an orthopedic plate in accordance with a first embodiment positioned for use in a translational calcaneal osteotomy procedure;

FIG. 1b is a medial posterior view of a foot with a further embodiment of the plate of the present invention also for use in a translational calcaneal osteotomy procedure;

FIG. 5 is a top perspective of the plate shown in FIG. 2;

FIG. 6 is a end perspective of the plate shown in FIG. 2;

FIG. 7 is a bottom perspective of the plate shown in FIG. 2;

FIG. 8 is a side perspective of the plate shown in FIG. 2;

FIG. 9 is a top view of a second embodiment of the orthopedic plate useful for understanding the invention;

FIG. 14 is a bottom perspective of the plate shown in FIG. 9;

FIG. 16 is a top view of a third embodiment of the orthopedic plate of the present invention;

FIG. 23 is a side perspective of the fourth embodiment of the orthopedic plate of the present invention;

FIG. 24 is a side perspective of the fifth embodiment of the orthopedic plate useful for understanding the invention;

FIG. 25 is a side perspective of the plate driver;

FIG. 31 is a bottom perspective of the plate loosely attached to the plate driver in accordance with the invention;

FIG. 32 is a side view of the plate and driver in accordance with the invention during insertion; and

FIG. 33 is a side view of the plate and driver in accordance with the invention during insertion. 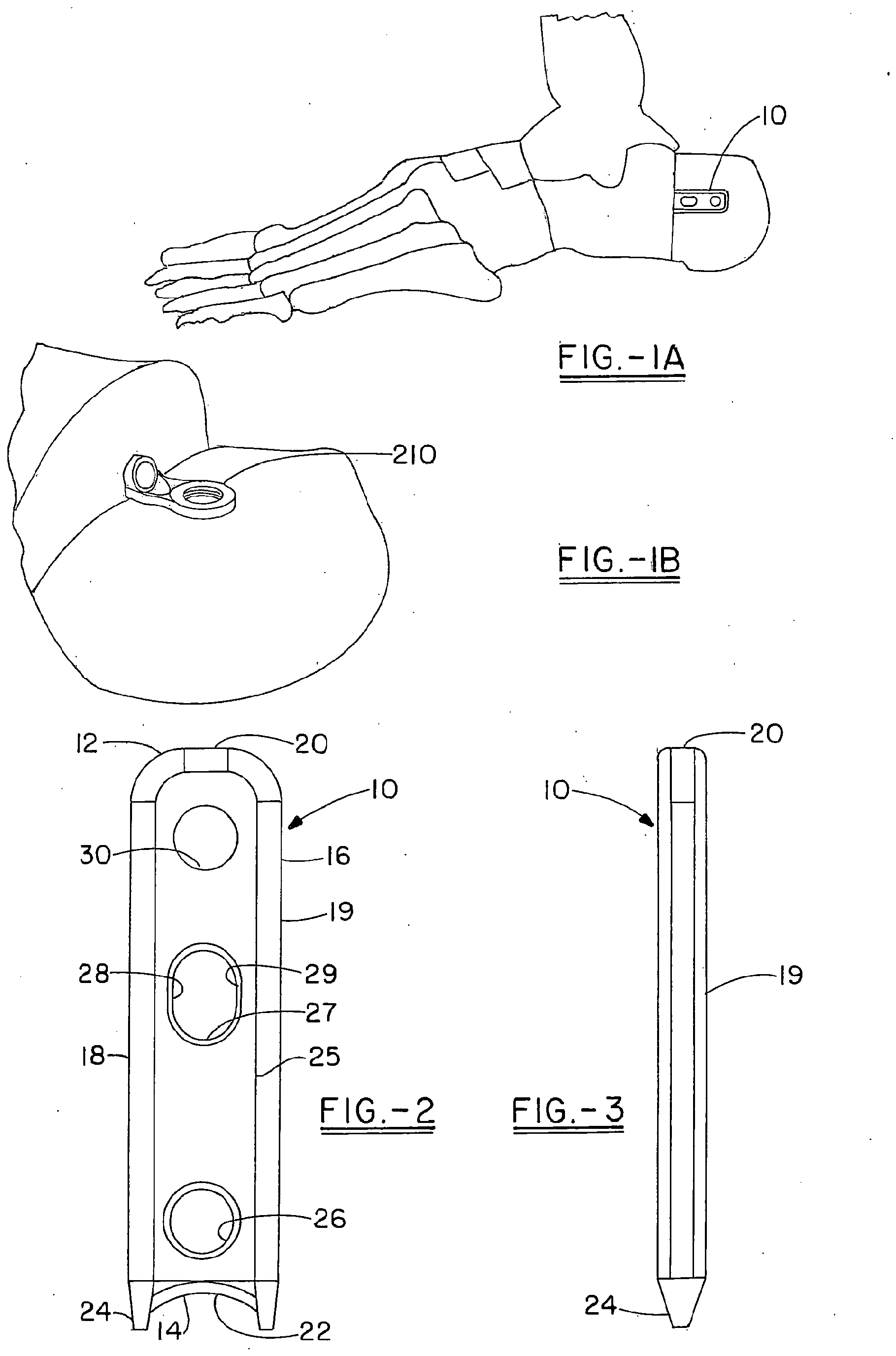 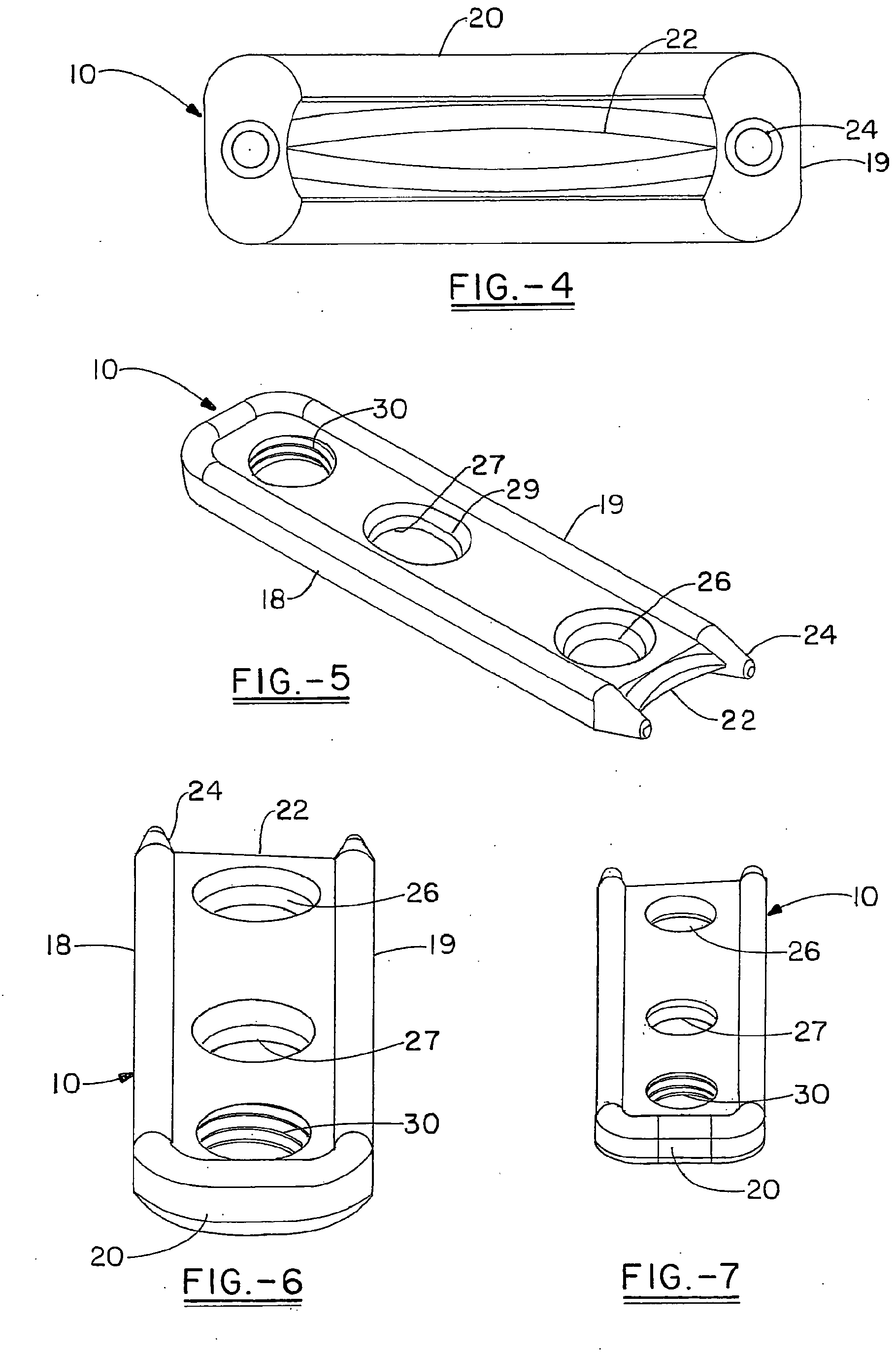 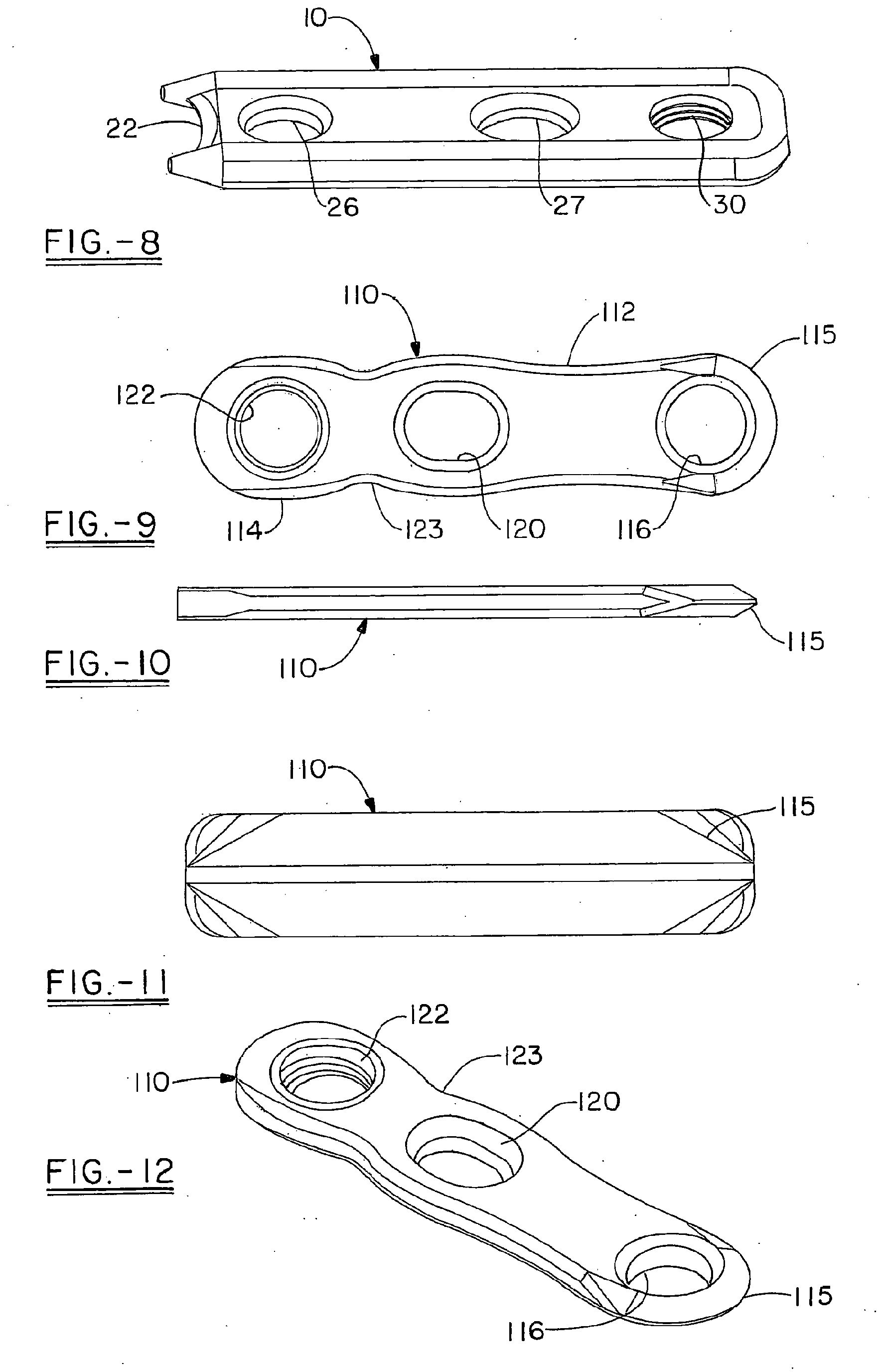 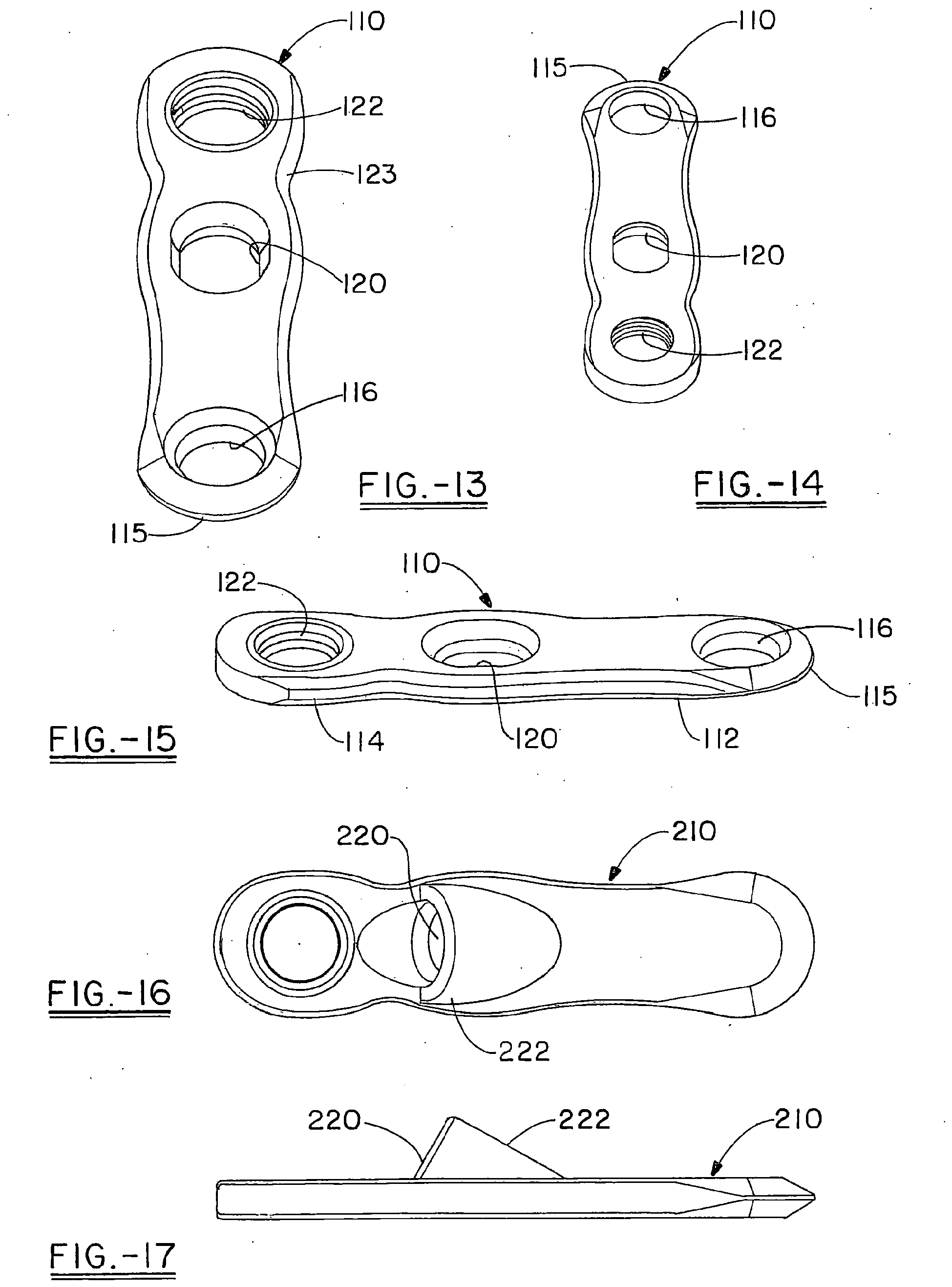 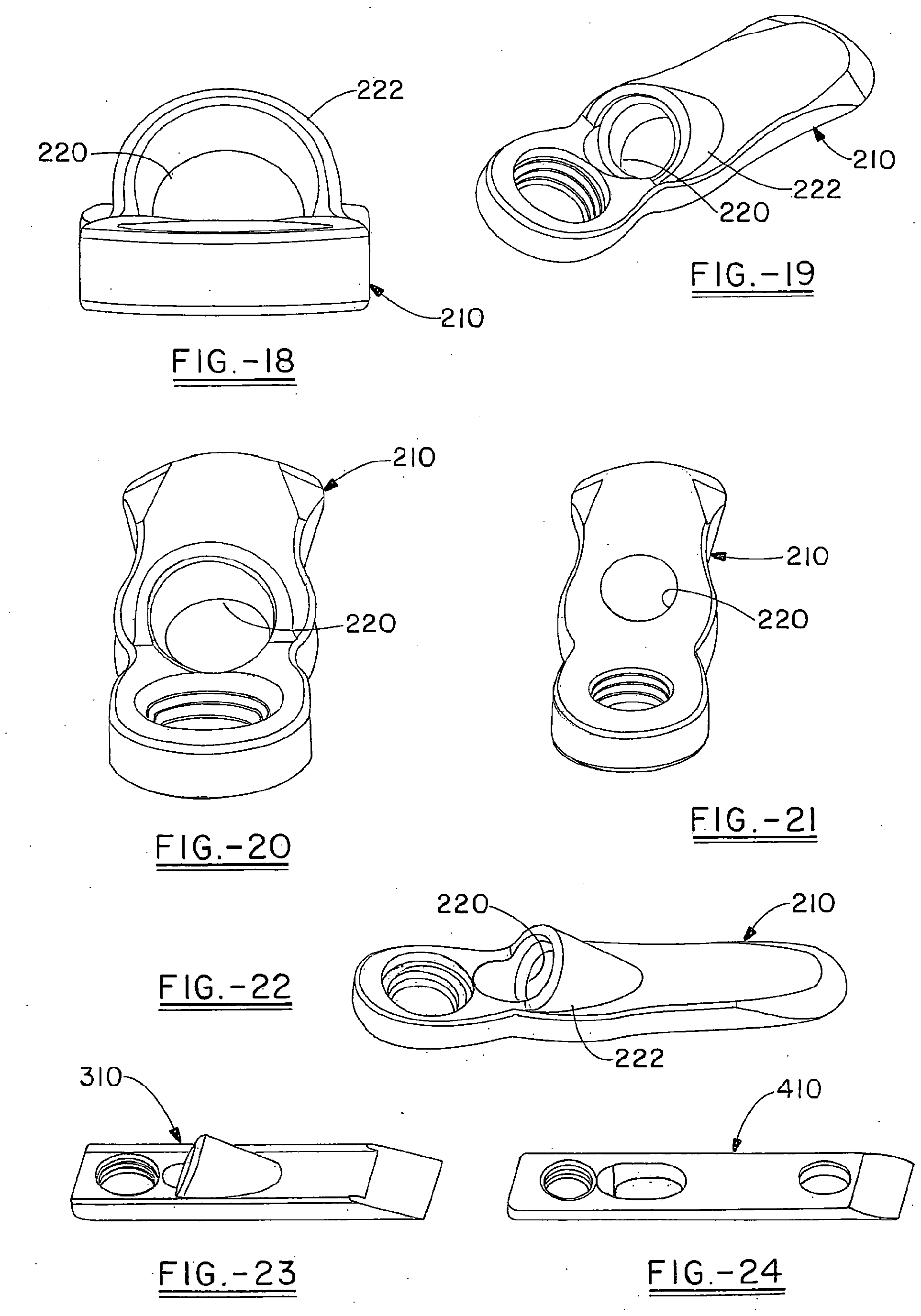 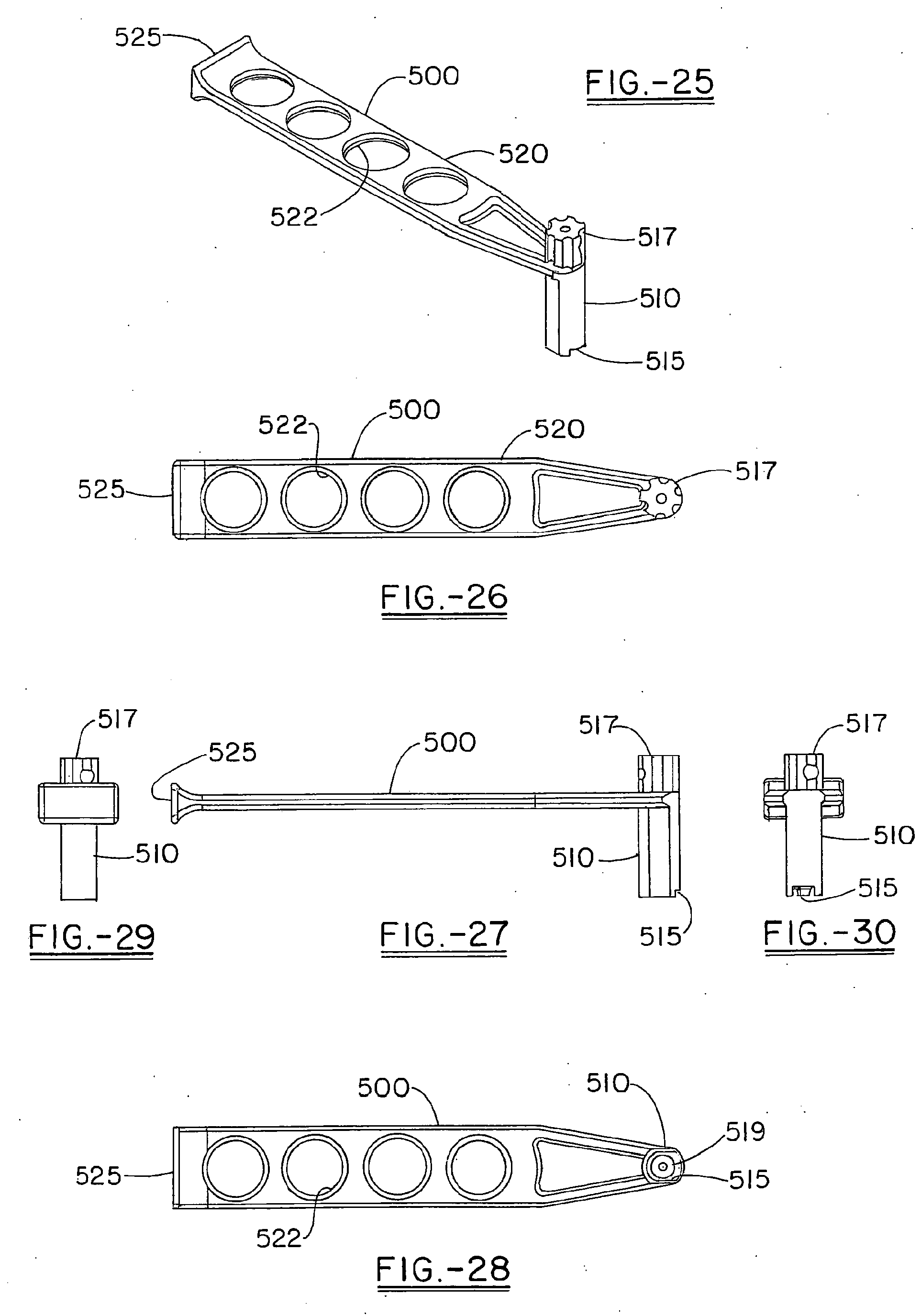 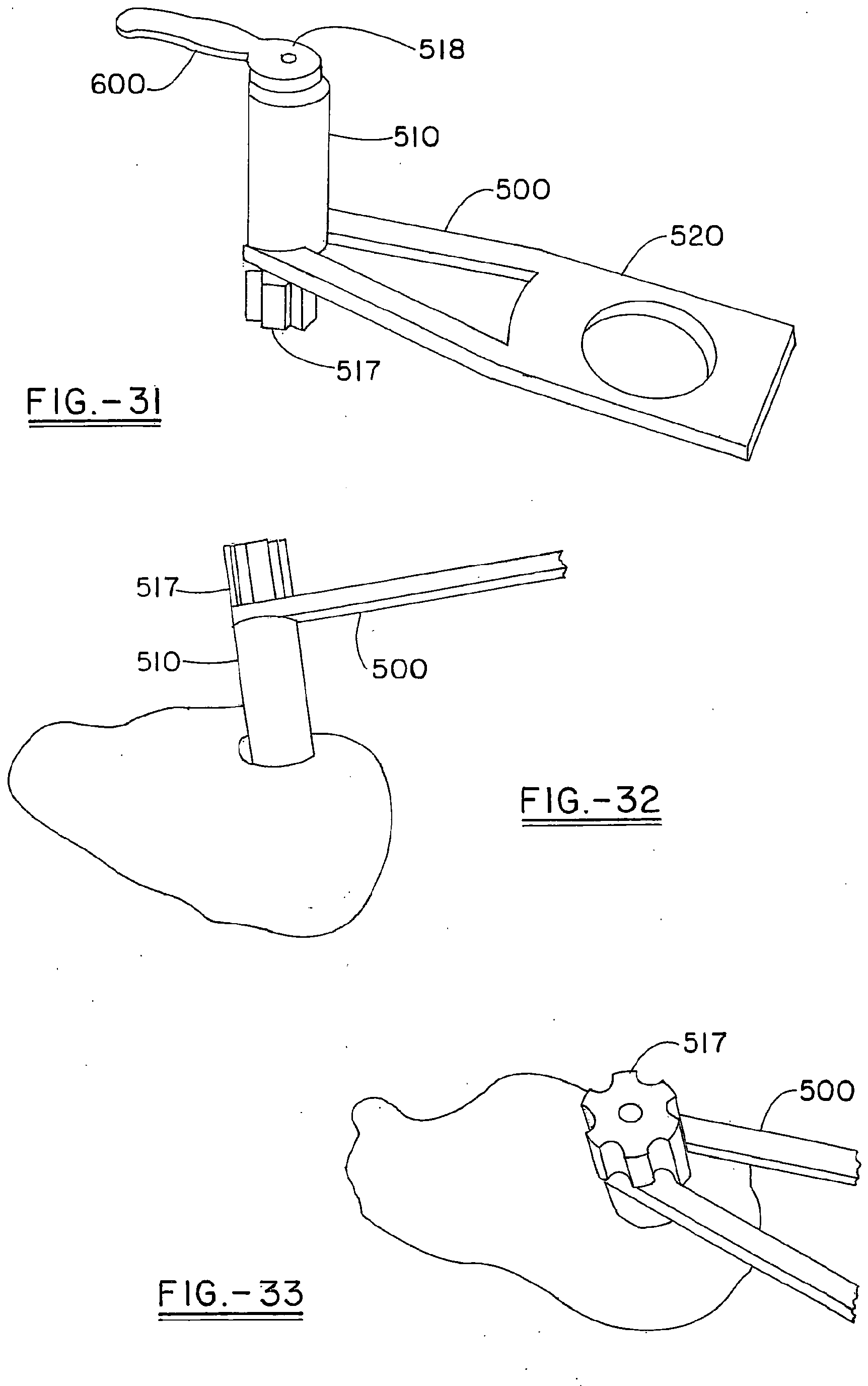