[0001] The present invention refers to a tension adjustment device in a strapping head for strapping machines.

[0002] As known, a very popular wrapping technique is that of wrapping tightly a load to be transported with one or more strapping loops. The strap is a thin ribbon, normally made of plastic material (but in some cases also of metal material), which is tightly wound loopwise around a load, closing it permanently through welding points between the two terminal edges.
[0003] The welding prevents an accidental reopening of the strap loop, which must then be severed to free the wrapping.
[0004] All strapping machines substantially resort to a strapping head which has two complementary and integrated functions: on the one hand, the launch and subsequent recovery and tightening of the strap around the product to be wrapped and, on the other, the welding of the two terminal edges.
[0005] Normally a single strapping head, mounted below the transit plane upon which the load to be packaged is running, incorporates a series of movement devices and members which perform all the above-said functions, i.e. they feed and launch the strap around the load, starting from a strap storage reel, block the free end and recovery or draw back the base portion, until they choke a strap loop around the load; finally, they perform the welding in the loop closing area and severe it from the rest of the strap which comes from the reel.
[0006] One of the critical steps of the strapping process is that of the strap recovery or draw back, after the launch thereof around the load to be wrapped, which also determines the tightening degree of the wrapping. Typically, a free end of a strap is launched onto a guiding track around the load to be wrapped, until it ends in correspondence of a welding head, where it is gripped and retained; once a wide loop has been performed around the load (the annular guiding track is normally far wider than the section bulk of the load) it is necessary to close and choke the strap loop to ensure a suitable tight wrapping; to perform this operation, since the terminal end of the strap is kept gripped, the strap portion coming from the storage reel is typically recovered or rewound backwards, causing the strap-launching members to work backwards.
[0007] Due to productivity requirements, it is important that the launch and the recovery of the strap occur at high speeds, the launch typically occurring at speeds ranging between 2.5 and 5.5 m/sec. However, at the same time, the strap acceleration/deceleration timing must be managed adequately, especially during the recovery operation. In this last step, moreover, it is important to impart the adequate tension to the strap ribbon, i.e. a force of a preset amount which, despite closely tightening the strap ribbon on the load, does not impair the integrity of the load (which event might occur, for example, with cardboard boxes or other stacks of collapsible material).
[0008] For these reasons, strapping heads comprising a complicated mechanism for the launch and recovery of the strap have already been offered on the market, which mechanism is provided with transmission wheels, mounted oscillating through elastic means. For the final recovery step, various systems have been proposed, suited to detect the tensioning of the strap so as to interrupt operation upon reaching of the desired tension value.
[0009] Typically, an actuator acts on a transmission wheel whereon the base portion of the strap is kept in engagement, so as to recovery the strap from the launching track and obtain a tightening around the load. In order to obtain the desired tension, it is necessary to interrupt the intervention of the actuator - which, per se, is capable of providing a tension far higher than the one desired for the specific type of strap and wrapping - upon reaching the desired tension.
[0010] The most intuitive adjustment systems resort to loading cells, which are capable of providing a signal directly proportional to the tension detected in the traction members: the signal is supplied to a control unit which provides to interrupt the tensioning action of the actuator upon reaching a preset value. The adjustment of the tension value may be obtained simply through a potentiometer suitably arranged on an operator's control panel.
[0011] However, these systems are expensive, require delicate tuning and are subject to electromagnetic interference.
[0012] Other, more economic and sturdier systems, resort to a yielding control device, wherein a moving control member moves in opposition to a spring upon the varying of the traction load applied to the strap. Thereby, since the stress imparted by a spring is proportional to the linear deformation thereof, it is sufficient to determine by how much the spring is shortened (or extended, depending on the configuration) by the actuator control, to have a determination of the tension which the actuator is imparting in that condition. In these cases, it is experimentally determined what the spring travel must be to obtain the desired strap tension and then a cam or an intervention tooth is arranged, integral in its movement with the spring system, which is capable of activating a micro-switch upon reaching the desired travel. Thereby a travel end signal may be mechanically generated by the micro-switch, upon reaching the desired tension, by which it is possible to control the operation of the actuator. An example of such device is disclosed in EP61620.
[0013] This second system, despite being sturdier and simpler, is cumbersome in case frequent adjustments are required, because the tension variation may be obtained by physically displacing the micro-switch with respect to the spring system. In the cases in which the tension must be varied often, for example because the loads to be packaged are highly changeable, it is not acceptable to continue to move the micro-switch position to change the intervention position of the spring system and hence the tension expressed by the strapping head. This complication is felt more in large strapping machines, wherein the micro-switch position might also be difficult to reach.

[0014] The object of the present invention is hence to provide a strapping head which, despite having a tension adjustment device of the latter type - i.e. relying on the displacement of a spring system - is also simple to adjust, overcoming the disadvantages of the prior art.
[0015] Such object is achieved through a strapping head and a corresponding strapping machine as described in its essential features in the attached main claim.
[0016] In particular, according to a first aspect of the invention, a tension adjustment device is provided in a strapping head for a strapping machine, of the type comprising at least a plurality of transmission pulleys apt to perform the launch and recovery of a strapping ribbon, actuated by an actuation motor, as well as a yielding system moving in opposition to spring means according to the tension imparted to the strap by said transmission pulleys, which furthermore comprises a star-shaped wheel the rotation of which is proportional to the displacement of said yielding system moving in opposition to spring means, said star-shaped wheel comprising a plurality of equally-distanced marks detectable by a sensor/transducer apt to issue in correspondence a counting signal of the number of marks detected during the rotation of said star-shaped wheel, recovery of said strap ribbon performed by said actuation motor being stopped upon reaching a preset threshold of said counting signal.
[0017] According to a further aspect, the yielding control system moving in opposition to spring means comprises at least one linearly sliding rack which a rotation mechanism controlling said star-shaped wheel engages with.
[0018] According to an additional aspect, the rack is controlled in displacement by an external wheel of a double epicyclic rotation mechanism, one input of which receives torque from said actuation motor and one output of which is a wheel for the recovery of said strap.
[0019] Preferably, the cited marks are in the form of cut outs at the periphery of the star-shaped wheel and the sensor is an optical sensor.
[0020] According to another aspect of the invention, a strapping head is provided, and a corresponding strapping machine, comprising at least one strap launch and recovery assembly which comprises a tension adjustment device of the strap as indicated above.
[0021] Further inventive aspects of the device are described in the dependent claims.

[0022] Further features and advantages of the strapping machine and of the strapping head device according to the invention will in any case be more evident from the following detailed description of a preferred embodiment of the same, given by way of example and illustrated in the enclosed drawings, wherein:

fig. 1 is an elevation front view of an exemplifying strapping head device;

fig. 2 is a front and side perspective view of the strapping head device of fig. 1;

fig. 3 is a perspective view similar to that of fig. 2 in an attitude which highlights some components of the tensioning device according to the invention;

fig. 4 is a longitudinal-section view of the arrangement according to the invention, seen from the front;

fig. 5 is an elevation rear view of the arrangement according to the invention; and

fig. 6 is a crosswise section view taken along line VI-VI of fig. 5.

Detailed Description of a Preferred Embodiment

1. Adjusting strap tensioning device of a strapping head for a strapping machine, of the type comprising at least a plurality of transmission pulleys apt to perform the launch and recovery of a strap ribbon, actuated by an actuation motor (M), as well as a yielding system moving in opposition to spring means according to a tension imparted on the strap by said transmission pulleys, characterised in that it furthermore comprises a star-shaped wheel (24) the rotation of which is proportional to the displacement of said yielding system movable in opposition to spring means (22), said star-shaped wheel (24) comprising a plurality of equally distanced marks detectable by a sensor/transducer (26) apt to issue in correspondence a counting signal of the number of marks detected during the rotation of said star-shaped wheel (24), recovery of said strap ribbon performed by said actuation motor (M) being stopped upon reaching a preset threshold of said counting signal.

2. The device as claimed in claim 1, wherein said yielding system moving in opposition to spring means comprises at least one linearly sliding rack (21) with which a rotation mechanism driving said star-shaped wheel (24) meshes.

3. The device as claimed in claim 2, wherein said rack (21) is driven in displacement by an outer wheel (20) of a double epicyclic rotation mechanism an entry of which receives torque from said actuation motor (M) and an exit of which represents a recovery wheel (37) of said strap.

4. The device as claimed in any one of the preceding claims, wherein said marks are in the shape of cutouts (24a) at the periphery of said star-shaped wheel (24) and said sensor is an optical sensor (26).

5. A strapping head for a strapping machine comprising at least a strap launch and recovery assembly, characterised in that said assembly includes a strap tension adjustment device as claimed in any one of the preceding claims. 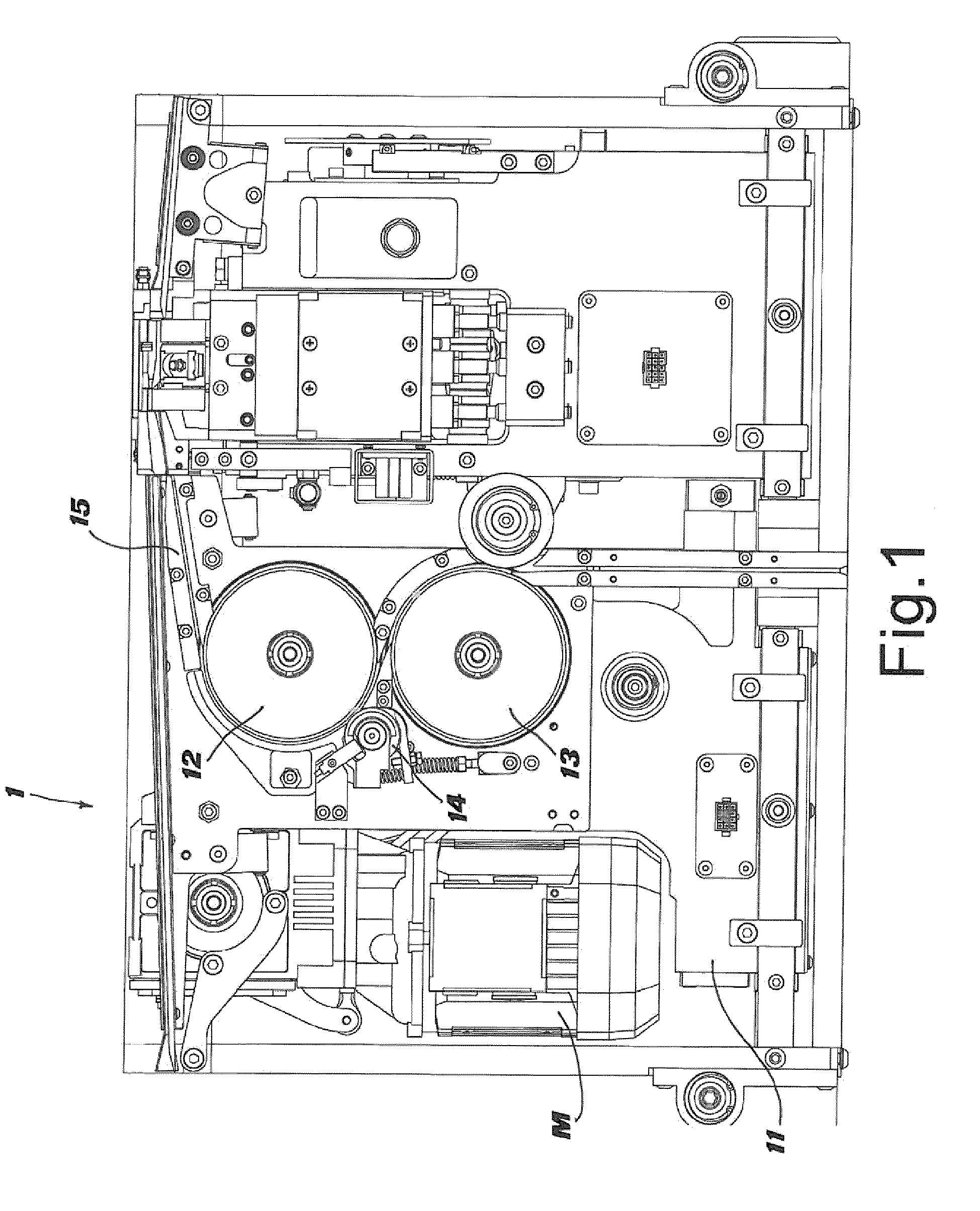 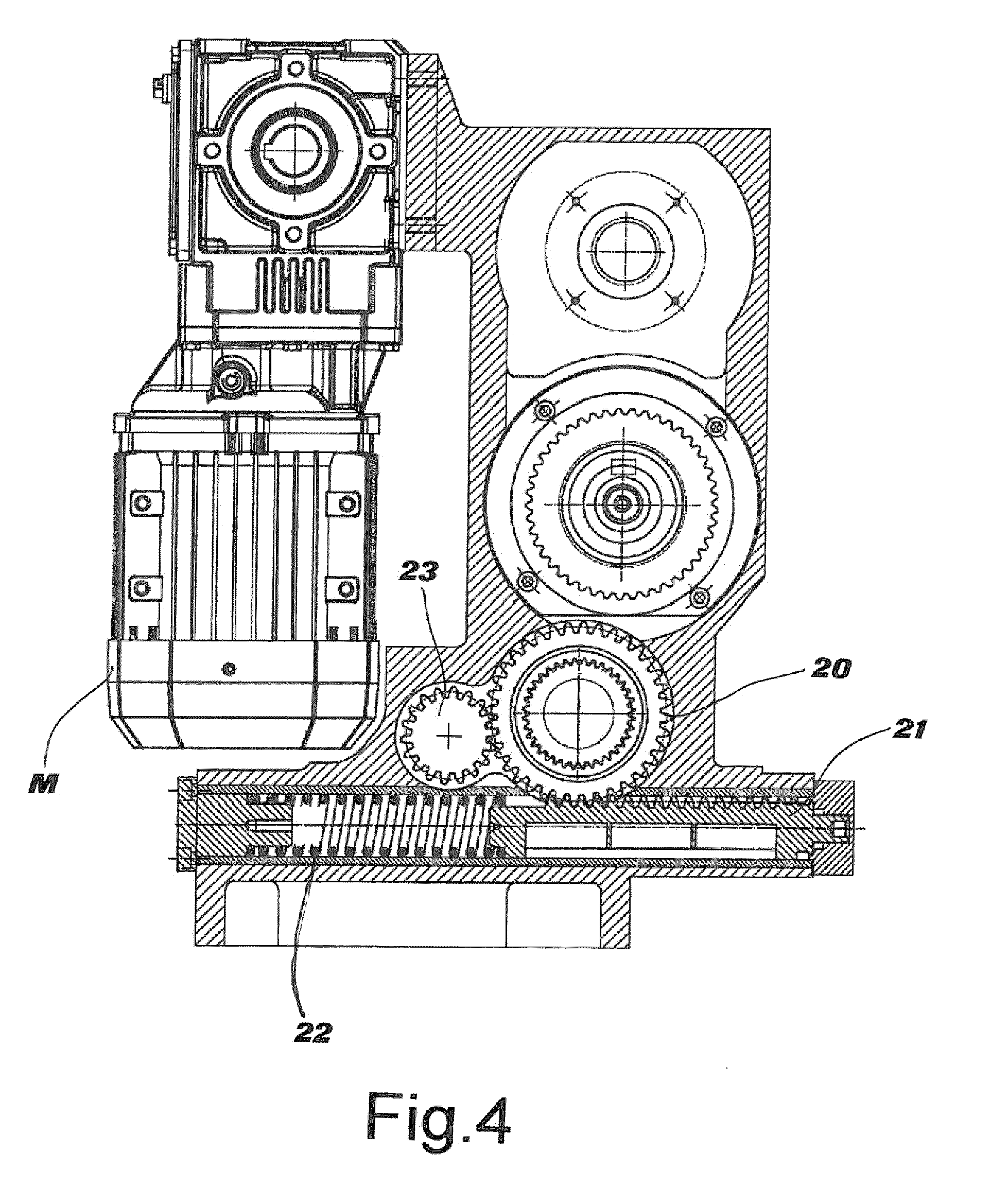 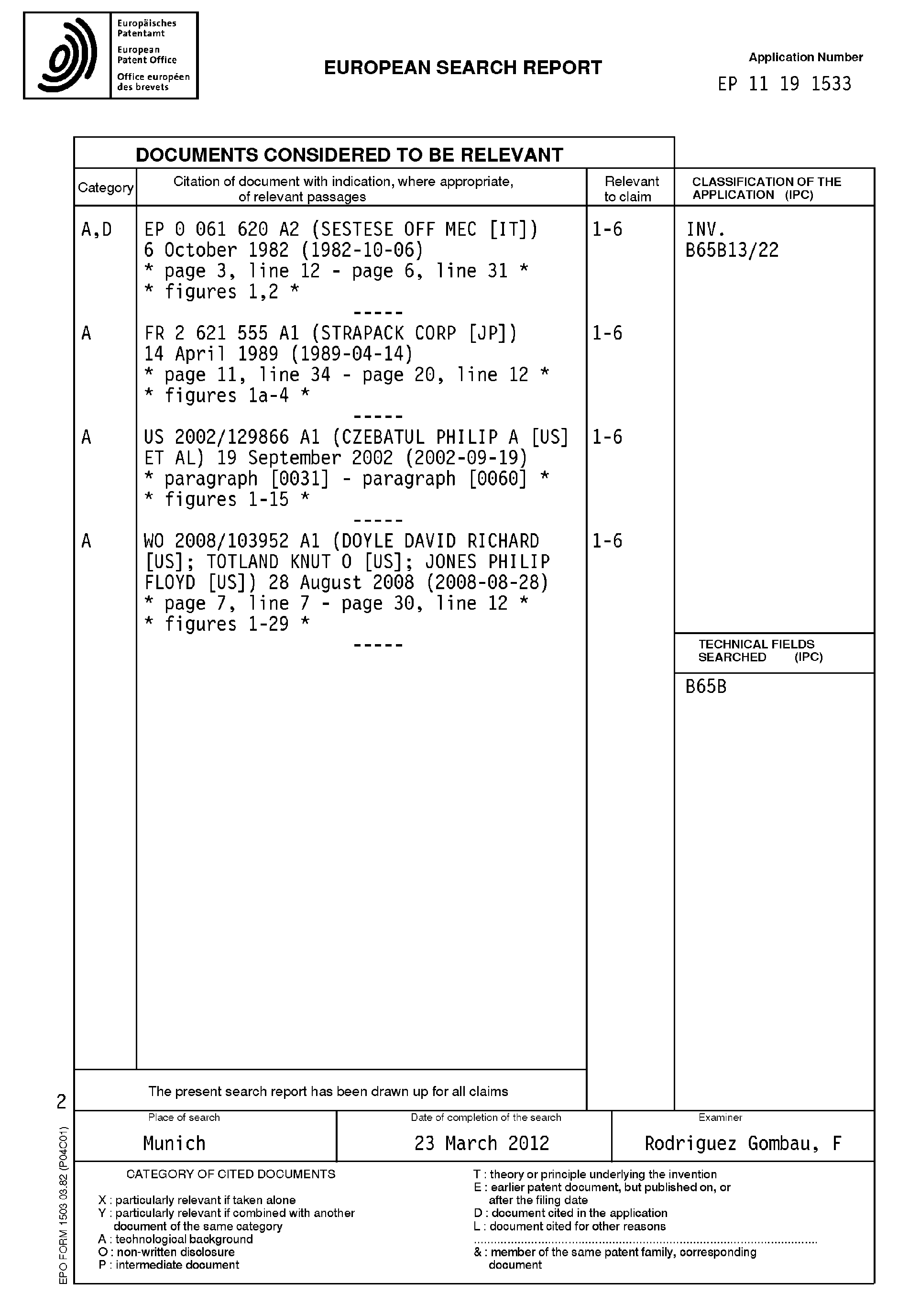