[0001] This invention relates to a tactile cueing apparatus for an aircraft. Tactile cueing is the generation of artificial "feel" in a pilot's control inceptor of the aircraft which otherwise would be absent or reduced because of the presence of power assistance between the inceptor and the aircraft flight control surface or other controlled element which it operates. The invention may also be used to generate artificial feel in unassisted flight control systems in which aerodynamic loads on the flight control surfaces do not themselves generate sufficient tactile feedback to the pilot (e.g. in very light helicopters and fixed wing aircraft), and in other aircraft mechanical controls which may require tactile feedback, for example a twist grip engine throttle control in a helicopter.
[0002] State-of-the-art aircraft have fly-by-wire systems in which there is no direct mechanical connection between the pilot's inceptor and the flight control surfaces. Tactile feedback to the pilot from the control surfaces either is lacking or in the most recent aircraft is synthesised by the aircraft's computerised flight control system. There are however many more mature aircraft which have mechanical linkage (e.g. rods, cables, gearing, bell-cranks) between the control inceptors and the flight control surfaces. In an aircraft of any size or performance, the control forces required at the inceptor can become greater than the pilot can comfortably apply. Therefore such aircraft have servo-assistance, generally hydraulic rams or motors. The inclusion of such servo-assistance however deprives the pilot of most of the "feel" of the controls, and some illusion of feel has to be provided by mechanical devices such as springs and dampers which resist movement of the inceptor from its centre ("hands-off") position.
[0003] The present invention aims in its preferred embodiments to provide an alternative to such mechanical devices, which will enable the tactile cues available to the pilot of such mature aircraft to be upgraded without the expense of retrofitting full fly-by-wire systems to the aircraft.
[0004] US2003/226937 (Einthoven Pieter et al) shows an active control inceptor system having a fly by wire means of control that has been designed to control an aircraft via a number of actuators electrically wired to a flight controller that receives a signal from the control inceptor. Such a system does not have mechanical linkages between the control inceptor and a surface to be controlled.
[0005] According to the invention, there is provided a tactile cueing apparatus to augment an aircraft control system, the aircraft control system comprising a controlled element and an operator's inceptor for moving the controlled element via a mechanical linkage connecting the inceptor to the controlled element, the tactile cueing apparatus comprising an input sensor for sensing a control input to the inceptor by the operator to move the controlled element, a controllable actuator (preferably an electromechanical actuator) configured to be installed in parallel with the mechanical linkage of the aircraft control system between the inceptor and the controlled element, and control means programmed to cause the actuator to perform one or both of:
[0006] The input sensor may sense a force applied to the inceptor by the operator. The resisting force then may be equal and opposite to the force applied to the inceptor by the operator when the linkage has moved to a position determined by the operator's input force according to the predetermined relationship.
[0007] It will be appreciated that the term "force" is used figuratively in this specification, so as to include a torque or moment as well as a linear force.
[0008] The predetermined relationship may comprise a non-linear relationship between the resisting force and the linkage position.
[0009] The predetermined relationship may comprise at least one range of force values within which a change in the force produces no movement of the mechanical linkage.
[0010] The control means may be programmed to change the predetermined relationship with a change in the aircraft's flight conditions.
[0011] The actuator may be a rotary actuator.
[0012] The apparatus may comprise a clutch or other disengaging means operable in the event of failure of the apparatus for disengaging the apparatus from the mechanical linkage.
[0013] The disengaging means when operative may apply a passive resisting force to the inceptor against movement thereof.
[0014] The invention also provides a tactile cueing system comprising a plurality of the tactile cueing apparatuses set forth above, each configured to be installed in parallel with a said mechanical linkage connected to a different control element of the aircraft, a said control means of a first said apparatus being arranged to monitor the operation of a said control means of a second said apparatus.
[0015] There may be feedback means for supplying a feedback signal indicative of the linkage position controlled by the second said apparatus to the control means of the first said apparatus and thence to the control means of the second said apparatus.
[0016] A said actuator may be arranged to be controlled in parallel by two said control means.
[0017] The invention also provides an aircraft comprising tactile cueing apparatus or a tactile cueing system as set forth above.
[0018] The invention will now be described merely by way of example with reference to the accompanying drawings wherein

Figures 1A and 1B show a prior-art aircraft suitable for retrofitting with tactile cueing apparatus according to the invention, Figure 1B being a plan view of part of the aircraft cockpit;

Figure 2 shows part of a prior art flight control system;

Figure 3 shows the corresponding part of a system incorporating apparatus according to the invention;

Figure 4 and 5 show the apparatus of Figure 3 in more detail;

Figure 6 shows the architecture of the apparatus;

Figure 7 shows some of the data links within the apparatus, and

Figures 8 and 9 illustrate relationships between inceptor force and control surface position which can be provided by apparatus according to the invention.

(i) to move so as to cause or permit the mechanical linkage to move to a position determined by the control input according to a predetermined relationship; and

(ii) to apply to the inceptor (12) a resisting force determined by the control input according to a predetermined relationship. 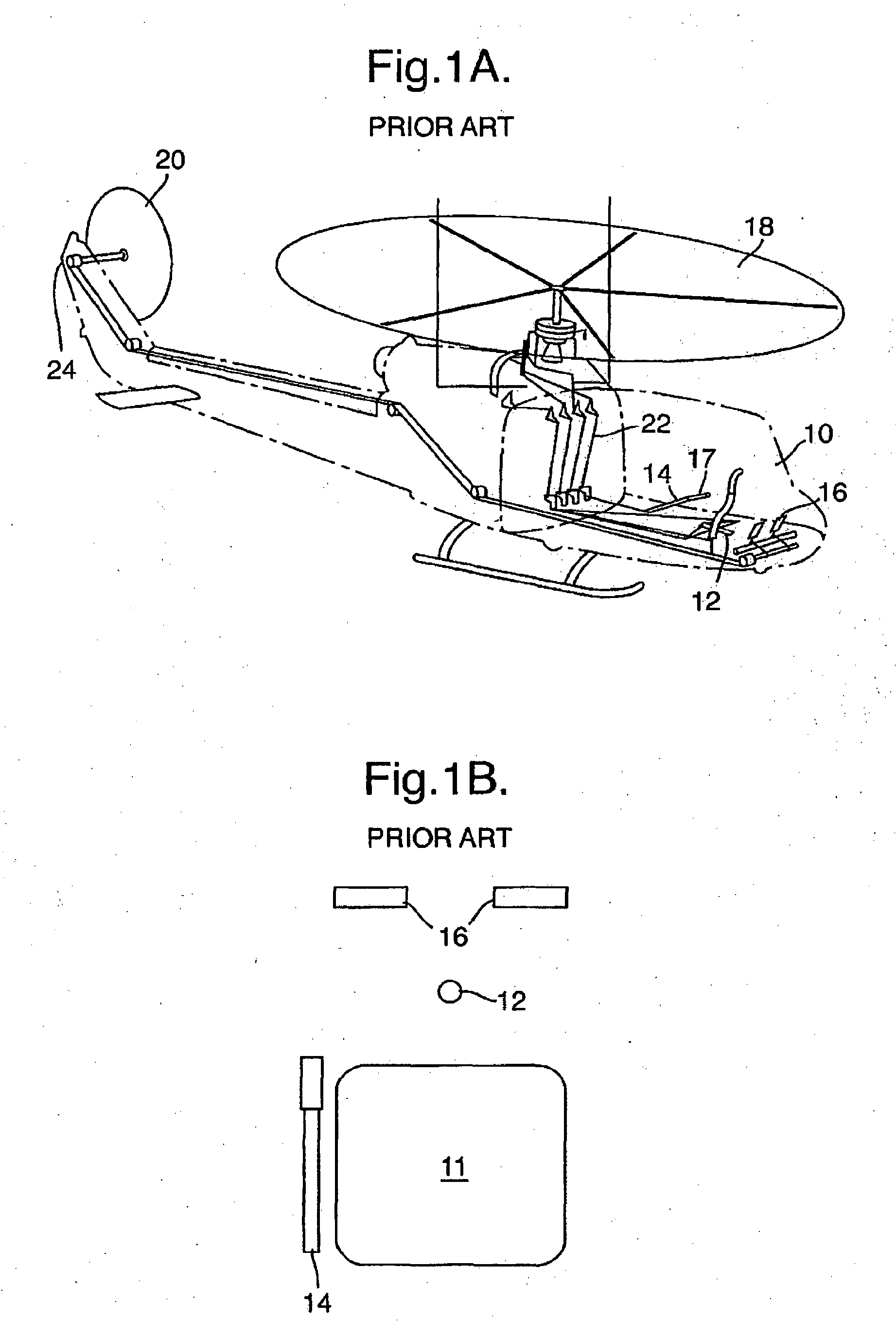 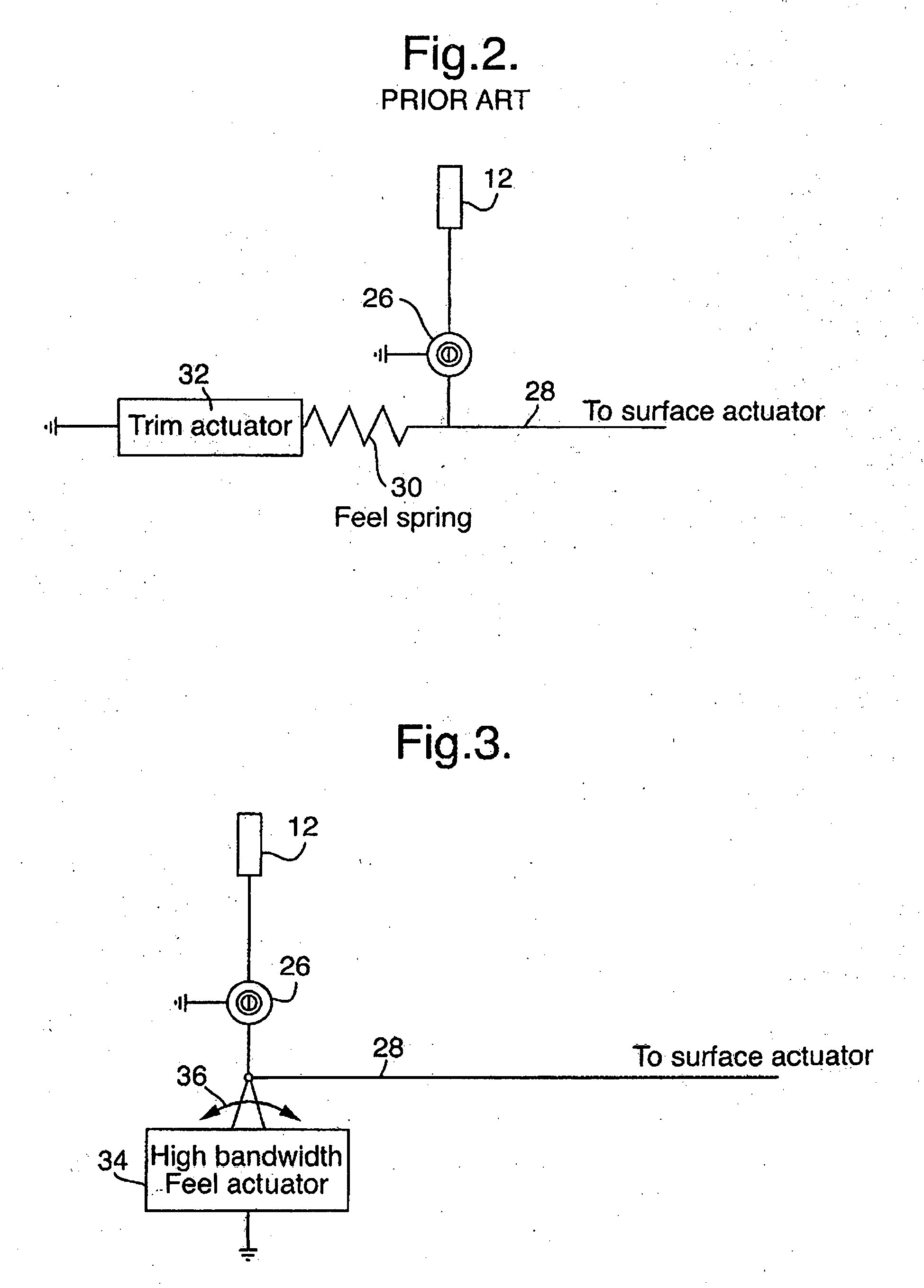 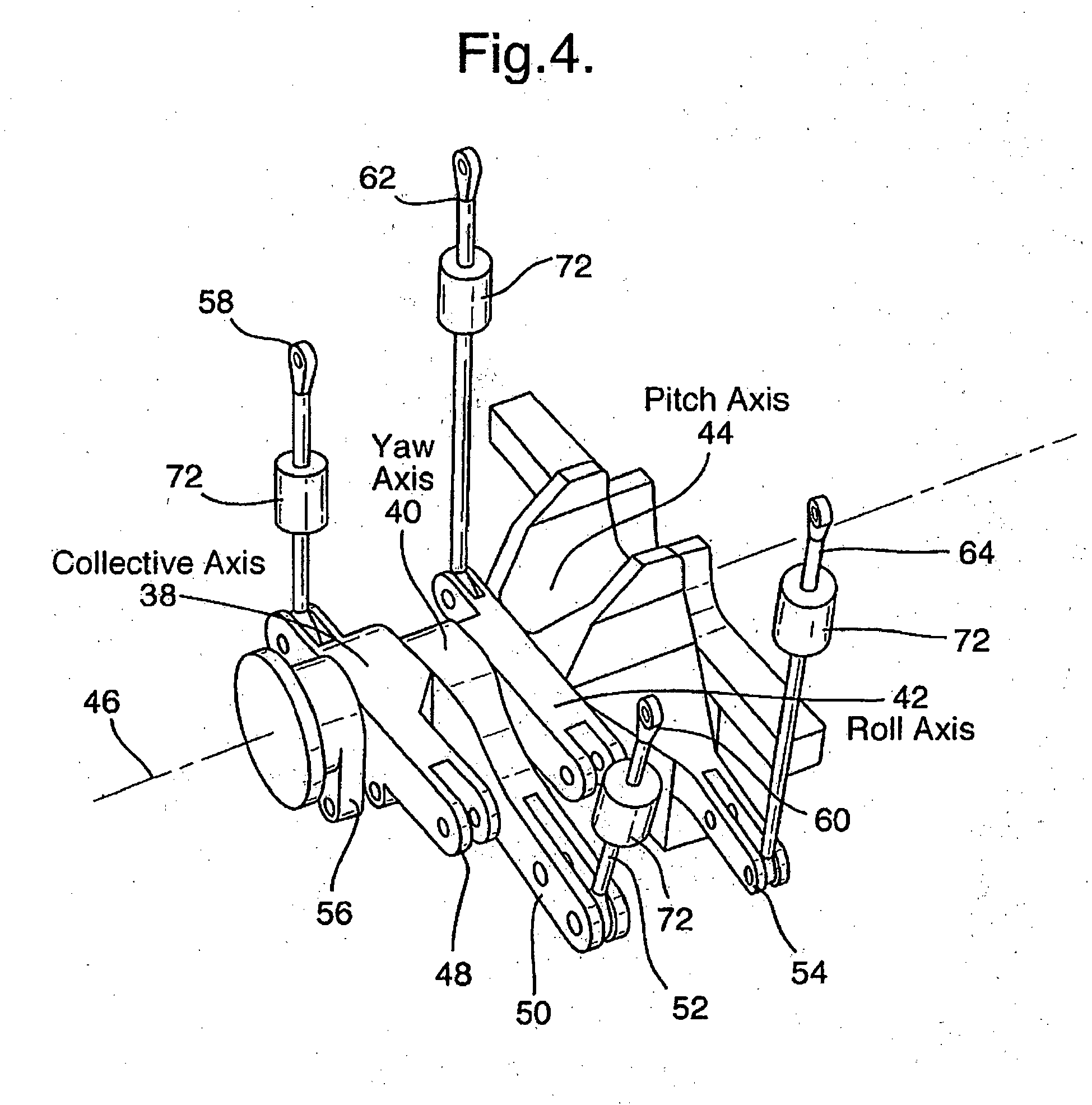 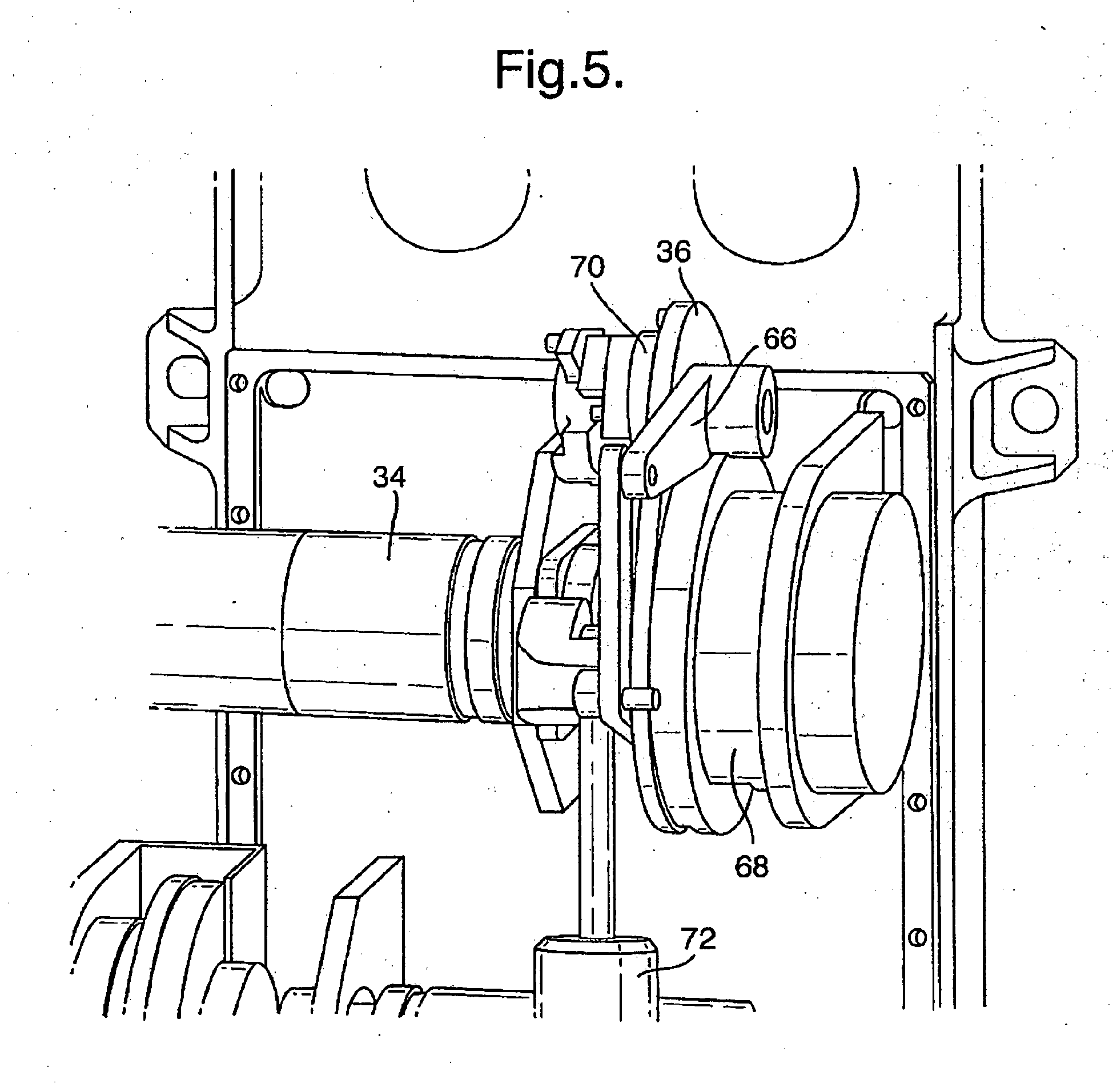 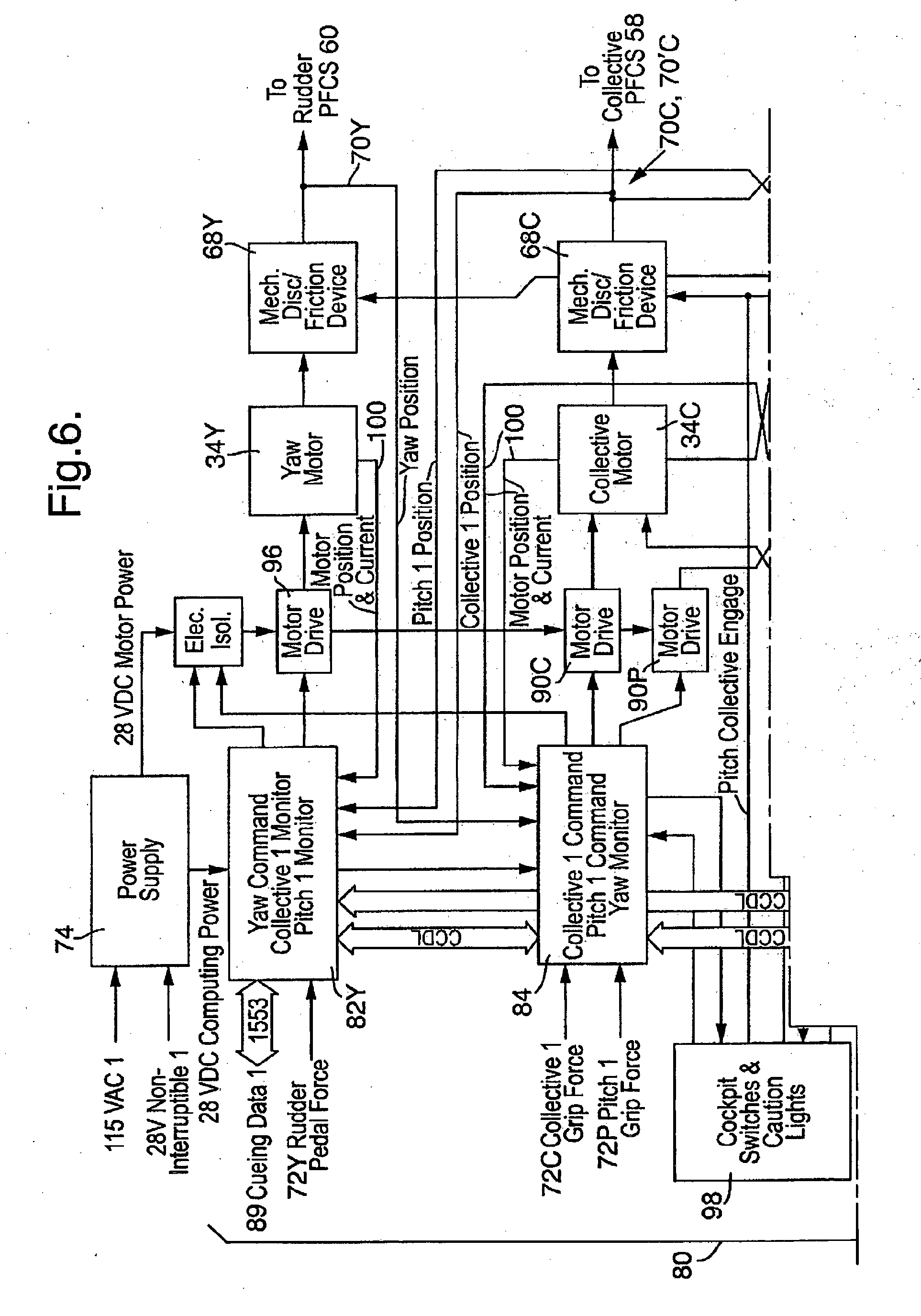 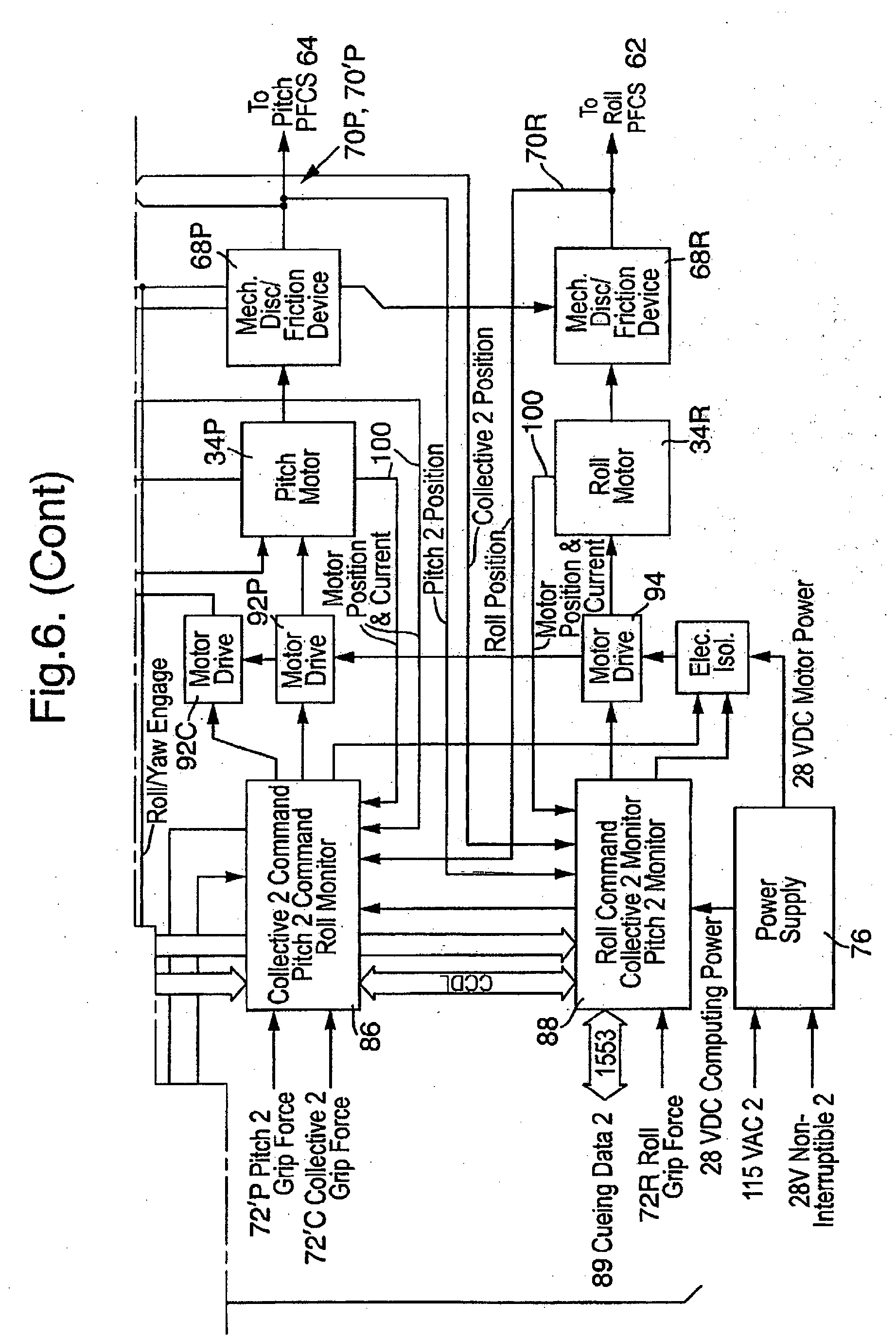 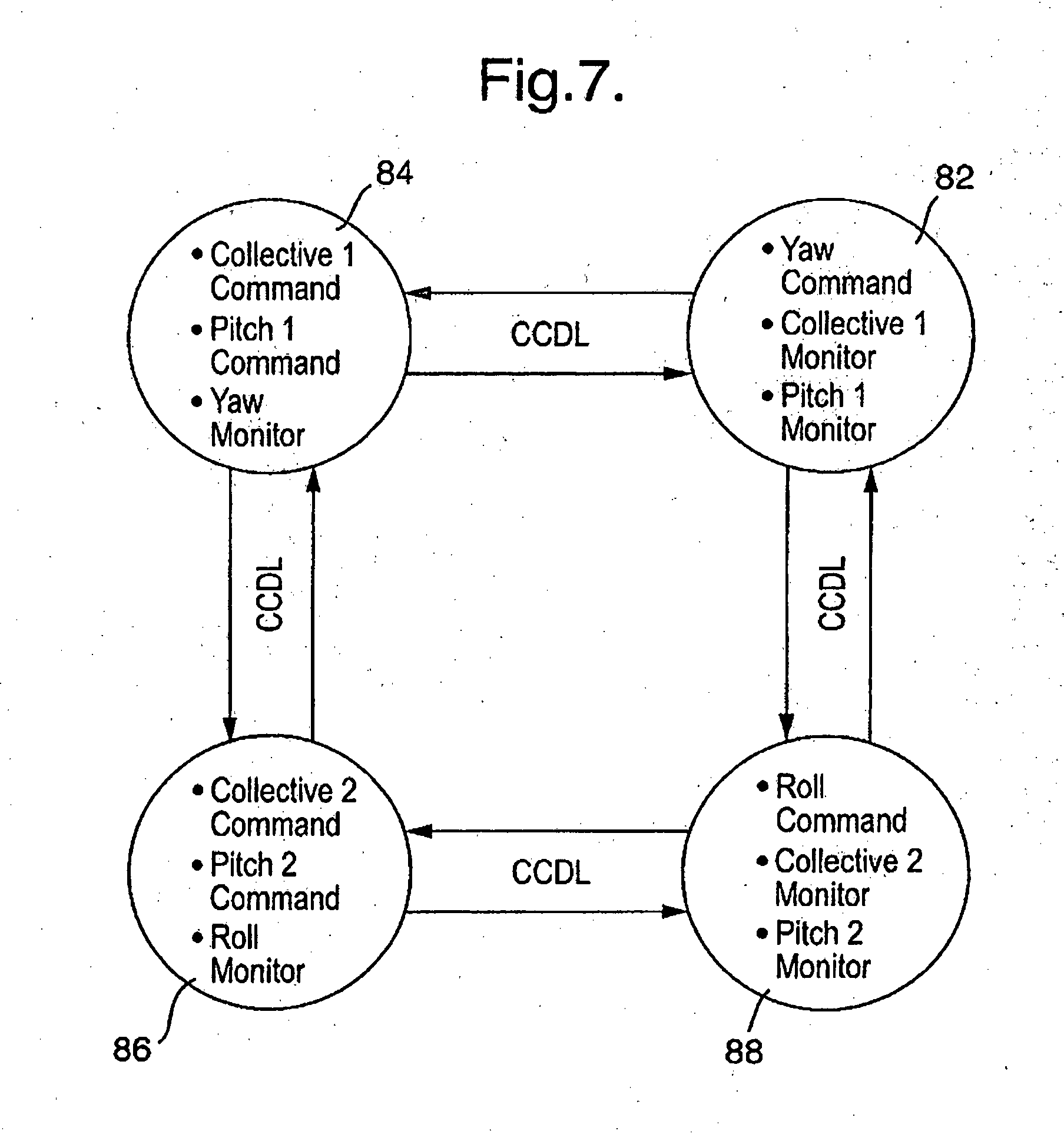