[0003] A piezochromic device wherein the device exhibits a reversible change in appearance initiated by an external applied force and then reverts back to its original appearance over a set relaxation time when the external force is removed.
[0004] In one embodiment, a piezochromic device comprising a transparent or semi-transparent cover layer and a magnetic layer, wherein between the cover layer and the magnetic layer is a liquid medium containing platelet-like shaped magnetically alignable pigments.
[0005] These and other objects and advantages shall be made apparent from the accompanying drawings and the description thereof.

[0006] The accompanying drawings, which are incorporated in and constitute a part of this specification, illustrate embodiments, and together with the general description given above, and the detailed description of the embodiments given below, serve to explain the principles of the present disclosure.

FIGURE 1 is a schematic representation (cross sectional view) of the piezochromic device produced in Example 1.

FIGURE 2 is a piezochromic response of the device produced in Example 1.

[0026] The magnetic material may be adjacent to the liquid medium or may be separated by a spacer layer, or a backing layer. The distance between the magnetic material and the liquid medium can be used to manipulate the strength of the magnetic field and therefore can be used to manipulate the relaxation time.
[0027] Specific patterns, images, or logos may be created within the liquid medium by the magnetic layer. In one embodiment permanent magnets may be used as the magnetic layer. The permanent magnets may be placed strategically to draw the magnetically alignable particles or pigments to a specific location, into a specific orientation, or both. An image may be formed by engraving the magnetic material which may change the magnetic strength of the magnet in the engraved area. An image may be formed by using a masking material, which may block the magnetic field, between the magnetic layer and the magnetically alignable pigment. Combinations of fixed magnets may be employed to form a wide variety of three dimensional patterns when the liquid medium is in its equilibrium state. These images, logos or patterns are disturbed by an applied external force but reform after a given relaxation time when the external force is removed. In one embodiment the magnetic layer comprises both permanent magnets and a magnetic coating.
[0028] The piezochromic device may be used for a wide variety of applications. Examples include applications designed for decorative or security features. The use of pressure sensitive logos in the form of films or shrink sleeves can be ideal for next generation packaging design. In addition, the device may be used as an overt security feature to protect sensitive documents or finished goods from unwarranted handling or forgery.
[0029] The piezochromic device may also be used as a reversible pressure sensor. One example includes a pressure sensitive film to indicate sudden changes in pressure. This could be useful, for example, as a direct indicator for boundaries used on a sports court (a tennis court, for instance) or field where it is difficult to determine whether or not an object came into contact with the boundary. Another example would be the use of this device to indicate slight pressure variations within a flexible object, such as beverage container.
[0030] The piezochromic device may be used as a reminder, such as when a drug needs to be dispensed on a regular schedule, but not more often. Pressure on the device may dispense a drug while simultaneously disturbing the magnetically aligned pigments. After a predetermined time the magnetically aligned pigments will have returned to their equilibrium state. While the pigments are not in the equilibrium state it will be evident that the drug has been dispensed within the predetermined time and should not be dispensed again until after the pigments have returned to their equilibrium state.
[0031] While the present disclosure has illustrated by description several embodiments and while the illustrative embodiments have been described in considerable detail, it is not the intention of the applicant to restrict or in any way limit the scope of the appended claims to such detail. Additional advantages and modifications may readily appear to those skilled in the art.

[0032] Demonstration of a piezochromic device based on magnetic alignment was achieved using a modular design comprised of a stacked series of films as depicted in Figure 1. Preparation began by cutting two 25 mm by 38 mm rectangular pieces of magnetic sheet (e.g. ProMAG® Adhes-A-MAG™, 12382). On one of the magnetic rectangles (the face not containing adhesive), is placed a length of double-faced tape (Shurtape DF 65). A hole was punched about 8mm in diameter through the magnetic rectangle with the double-faced tape attached. The appropriate spacer material was cut to a square (e.g. PETE, polyethylene, polypropylene, fiberboard, or cardstock, etc.) with dimensions about 12 mm by 12 mm. This magnetic rectangle need not have been a magnetic material.
[0033] The square spacer material was placed onto the whole magnetic piece, and centered (more than one type of piece of spacer may be used with the multiple layers stacked so that the desired thickness is achieved). The backing paper on the magnetic sheet with the hole was removed and secured to the solid magnetic sheet and spacers so that the spacer formed the bottom of a well with the edges sealed via the adhesive backing (see Figure 1).
[0034] The shallow well (thickness of well = thickness of the magnetic sheet) was filled with a suspension consisting of 2 wt% magnetic pigment (e.g. SunGEM™ 290-7203, SunChemical) in polydimethylsiloxane (Clearco Products Co., 100,000 cSt). The well was filled with approximately 28 mg of the suspension. The backing of the double faced tape was then removed and a piece of clear vinyl sheet affixed to the adhesive, as a cover layer. The sheet was affixed with care to prevent any significant quantities of air being trapped inside the well.
[0035] After approximately 45 minutes, the magnetically alignable particles contained within the suspension aligned along the magnetic field lines established by the magnetic sheet creating a well defined three dimensional image.
[0036] The piezochromic response was initiated by application of a 10 N/cm2 force for 6 seconds in the direction normal to the shallow well containing the suspension. Immediately following removal of the applied external force, the image was completely disturbed resulting in a solid silver pearlescent appearance, for example that characteristic of SunGEM™ 290-7203.
[0037] During a period of about 45 minutes, the visible portion of the device converted from the solid silver pearlescent appearance back to the well defined three dimensional image induced by the magnetic field lines (as shown in Figure 2).
[0038] The time periods required to obtain changes in appearance as described in the above example, can be significantly altered based on the types of materials and configuration used in the inventive device. Thus, the time to affect appearance change can range from milliseconds to minutes, or even hours, days, months or years if so desired. In another embodiment, the device could be configured such that a permanent change of appearance is affected as this may be useful as a security feature to show evidence of unwarranted handling. It is also possible that the device could be configured so as to reflect a precise amount of time elapsed after the force was initially applied.
[0039] The piezochromic device may be used for a wide variety of applications. Examples include applications for toys, games, timing devices, equipment assembly tolerance indicators, decorative, safety or security features. The use of pressure sensitive devices in the form of films or shrink sleeves may be ideal for next generation packaging design. Piezochromic timing devices may also be used for consumer products and consumer packaging. The use of such a device can be incorporated into pharmaceutical or over-the counter medication packaging, such as bottles, tubes, jars, and lids for such packaging. Other pharmaceutical devices include injection pens for insulin and other medications as well as other drug delivery devices. In addition, the device may be used as an overt security feature to protect sensitive documents or finished goods from unwarranted handling or forgery. Other potential uses could be for decorative purposes, such as flooring, wall coverings or tiles, and other decorative surfaces. Examples of specific applications include tapes, such as sports tape for marking basketball or tennis courts or other sports arenas. Other examples are pharmaceutical & consumer packaging - wrappers, vial, boxes, bags (IV & others), inhalers, dispensers, blister packs, sprayers, tubing, pouches, where timing devices can be used to clearly identify when to apply or take a medication or product or to remove a cleaner or conditioner or dye from a surface or other application.
[0040] Those skilled in the art having the benefit of the teachings of the present invention as hereinabove set forth, can effect numerous modifications thereto. These modifications are to be construed as being encompassed within the scope of the present invention as set forth in the appended claims.

2. The device of claim 1, wherein the cover layer is flexible.

3. The device of claim 1, additionally comprising a backing layer between the liquid medium and the magnetic layer.

4. The device of claim 3, wherein the backing layer is flexible.

5. The device of claim 1, wherein the magnetic layer is an electromagnet.

6. The device of claim 1, wherein the magnetic layer is a permanent magnet.

7. The device of claim 1, wherein the pigment is a pearlescent pigment.

8. The device of claim 1, wherein the pigment comprises an iron oxide layer.

9. The device of claim 1, wherein the liquid medium is selected from the group consisting of silicone, hydrocarbon or mineral oils, poly-alpha-olefins, polyol esters, glycerols, and glycols.

10. The device of claim 1, wherein the pigment comprises iron oxide.

12. Use of the device of claim 1 by applying pressure to the device, wherein the pressure disrupts the orientation of the pigments.

13. The use of claim 12, wherein the magnetic layer orients the magnetically alignable pigments.

14. A method for determining whether a certain amount of time has elapsed since an event using the device of claim 1, wherein the liquid medium is sufficiently viscous to cause the pigments to reorient in the magnetic field of the magnetic layer, the method comprising the following steps:

applying pressure to the cover layer of the device defining the event;

15. The method of claim 14, wherein the viscosity of the liquid medium, the strength of the magnetic field, and the magnetic susceptibility of the pigment are chosen so the time passed since the event takes longer than one minute. 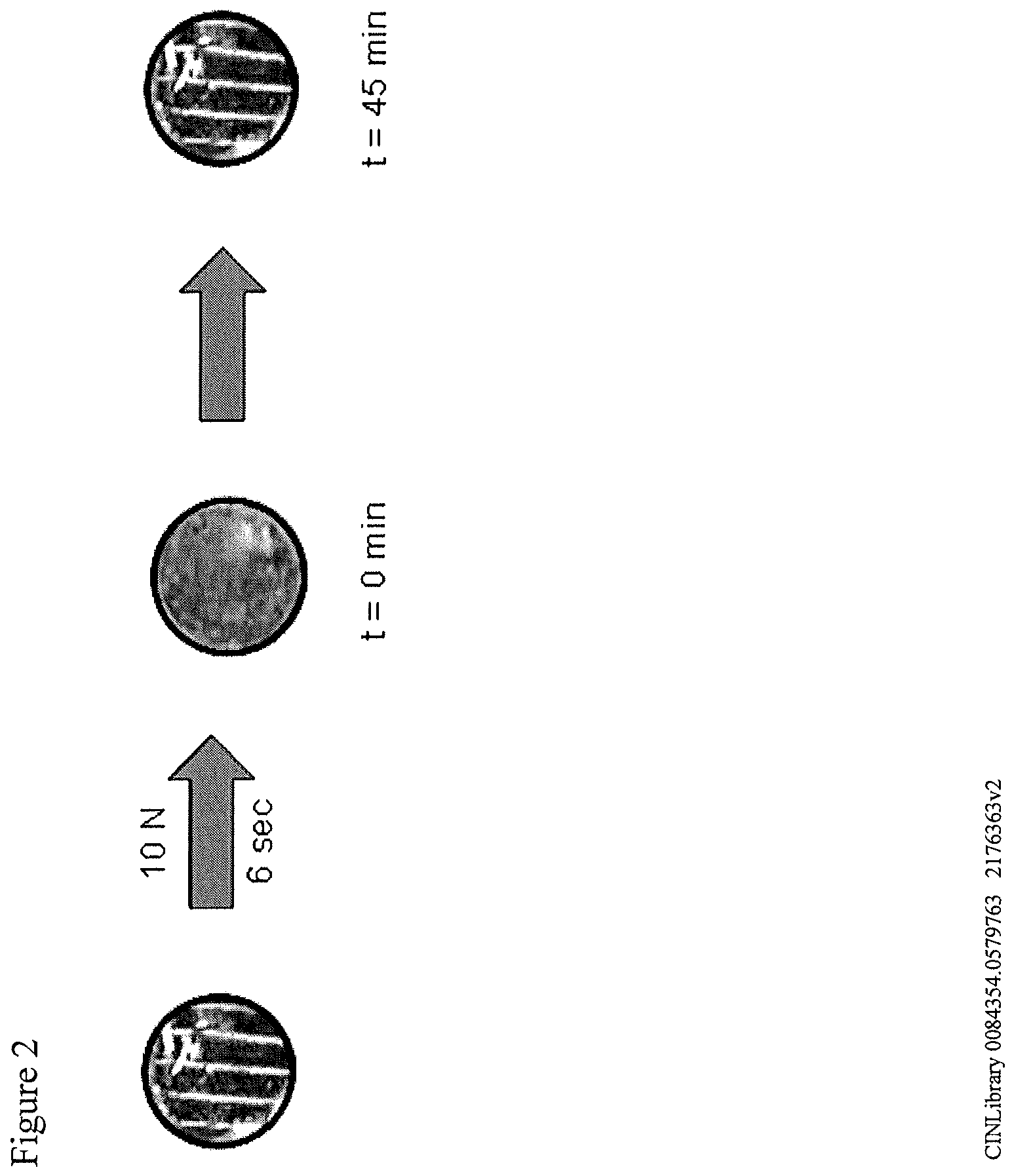