[0001] Neuromuscular electrical stimulation ("NMES") (also referred to as powered muscle stimulation, functional muscle stimulation, electrical muscle stimulation, and other terms) has several therapeutic uses, including pain relief, prevention or retardation of disuse atrophy, and improvement of local blood circulation. NMES is typically delivered as an intermittent and repeating series of short electrical pulses. In many implementations, these pulses are delivered transcutaneously by surface electrodes that are attached to a person's skin. Electrodes may be held to the skin through the use of straps, adhesives, or other mechanisms, and often contain a coupling layer composed of hydrogel that is capable of enhancing the efficiency of energy transfer from the electrode to the skin and underlying tissues.
[0002] A known drawback to the use of NMES with surface electrodes is user discomfort. As energy is transmitted to muscle tissues by surface electrodes, it passes through the skin and through superficially-located sensory nerves. As the activation threshold for these sensory nerves is generally lower than that of the motor nerves that control muscle activation, these nerves are usually innervated during NMES. This sensory excitation may cause discomfort in the form of a 'pins and needles' or similar sensation. For many users this sensation is uncomfortable, and in some, it is intolerable even when they consider the long-term benefits of NMES. Thus, discomfort impacts user compliance and can limit NMES effectiveness, for example by limiting energy levels used to those that the patient can tolerate instead of those that are most therapeutically useful. It has been the goal of several investigations to improve comfort during NMES through adjustments to electrode size, electrode placement location, stimulation waveform parameters, and other mechanisms (for example, see Bennie et al., Eur J Appl Physiol 88 (2002), Baker et al., Clin Ortho Research 233 (1988), and Lyons et al., Med Eng Phys 26 (2004)).
[0003] The amount of discomfort induced by NMES through sensory nerve activation is related to the current density in superficial tissue regions. Without wishing to be bound by any theory, it is thus believed that comfort can be improved by reducing current density in superficial regions of tissue. However, using muscle stimulation devices and methods described in previous investigations, this reduction of superficial current density would lead to a corresponding loss of current density in deeper tissue regions that contain muscle tissues. This loss in deep-tissue current density will produce weaker muscle contraction, which in many cases will diminish the benefits of NMES therapy.
[0004] In U.S. Patent No. 4,580,569 to Petrofsky teaches a multi-electrode and multi-channel approach to reducing current density in superficial tissues while achieving greater current density in moderately deeper tissues. Specifically, Petrofsky teaches a method to use skin surface electrodes to stimulate a first muscle region that lies anatomically deeper than a second, more superficial muscle region, without stimulating contraction in said superficial muscle region. Two electrode sets are used that each provide a given amount of current, with the provided current from each electrode set being lower than the threshold level needed to activate superficial muscles. However, the two electrode sets are arranged (and potentially timed) in such a way that the two sources of energy combine at depth, and through superposition create enough current density to cause contraction of the deeper muscle region. The general method is illustrated graphically in Figure 1.
[0005] The teachings of U.S. Patent No. 4,580,569 are not, however, sufficient to achieve optimal discomfort reduction during NMES. For example, while the devices and methods disclosed by Petrofsky have some utility for small electrode separation distances and relatively shallow target muscle groups (the examples of hand and wrist muscles are provided in the specification), they will perform extremely sub-optimally for discomfort reduction during stimulation of larger and deeper muscle groups if it is desired not to compromise the degree of muscle activation in deeper muscles. This sub-optimal performance is related in part to lateral energy spreading, a phenomena that increases in severity as electrode separation distances are large. For larger and/or anatomically-deep muscle groups (e.g., quadriceps), electrode separation distances are most suitably 10-15 cm to achieve deep-penetration of energy (see Petrofsky et al., Eur J Appl Physiol 103 (2008)). This separation distance will cause for a three-dimensional spread of energy from both electrode pairs, with a portion of the applied energy from each electrode pair traveling through tissue regions in a way that it cannot combine with energy from the other electrode pair. This concept is illustrated generally in Figure 2(a). Thus, there is inherent inefficiency in the process. Due to this inefficiency, large current densities must be utilized at each electrode pair.
[0006] What are needed are more efficient muscle stimulation systems and their methods of use.
[0007] US 2009/012436 A1 discloses an functional electrical stimulation (FES) orthosis comprising: a rigid support device, for example a rigid exoskeleton or a rigid frame, to support a patient and/or correct a posture of the patient during use; a system to provide electrical treatment, for example a FES system to provide functional electrical stimulation; and a system to provide thermal treatment. Part of the patient, for example a muscle part, can be electrically treated and thermally treated by the orthosis. The orthosis is equipped with a thermal treatment system, for example a heating or cooling element, to provide and coordinate additional muscle relieve therapies.

Figure 1 illustrates existing techniques, wherein energy from two pairs or groups of surface electrodes can be combined at depth.

Figure 2(b) illustrates an exemplary embodiment in which exemplary impedance modification elements reduce the outward direction lateral spreading of energy.

Figures 6(a)-(d) provide an overview of situations where fixed phase delays between stimulation channels are non-ideal, and an explanation of why precise timing control is important. Also shown is an example embodiment of a device, system, and method of use. 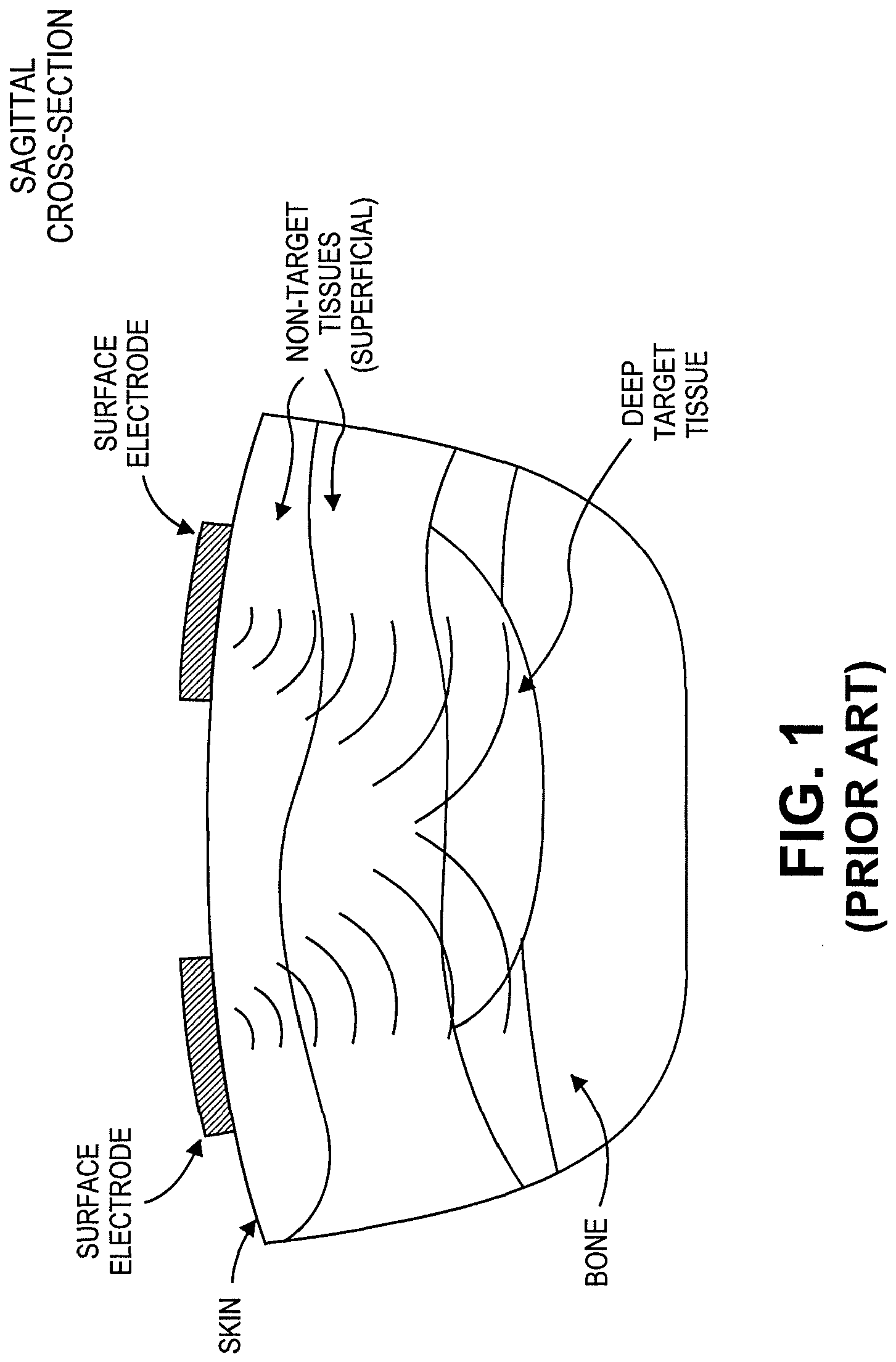 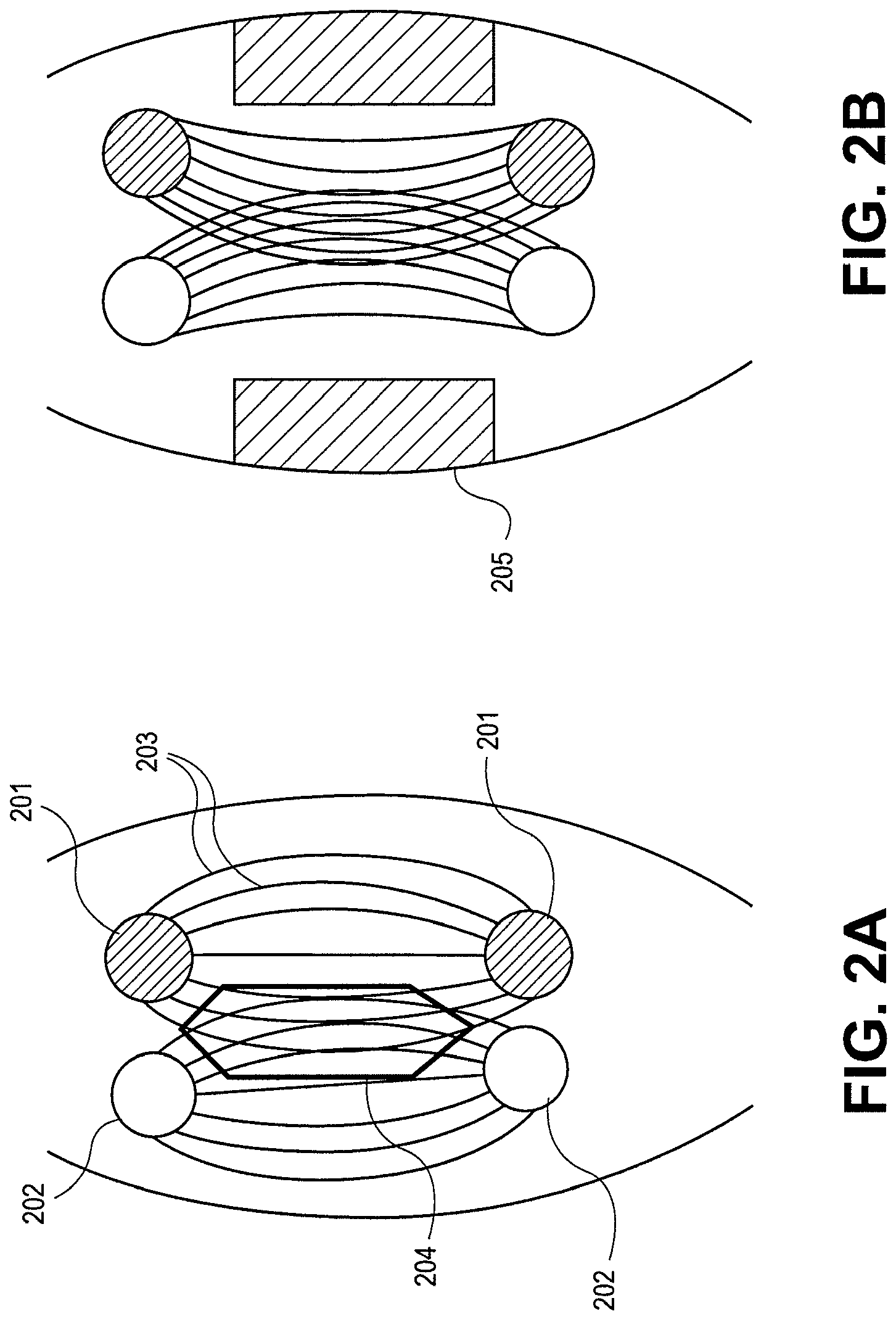 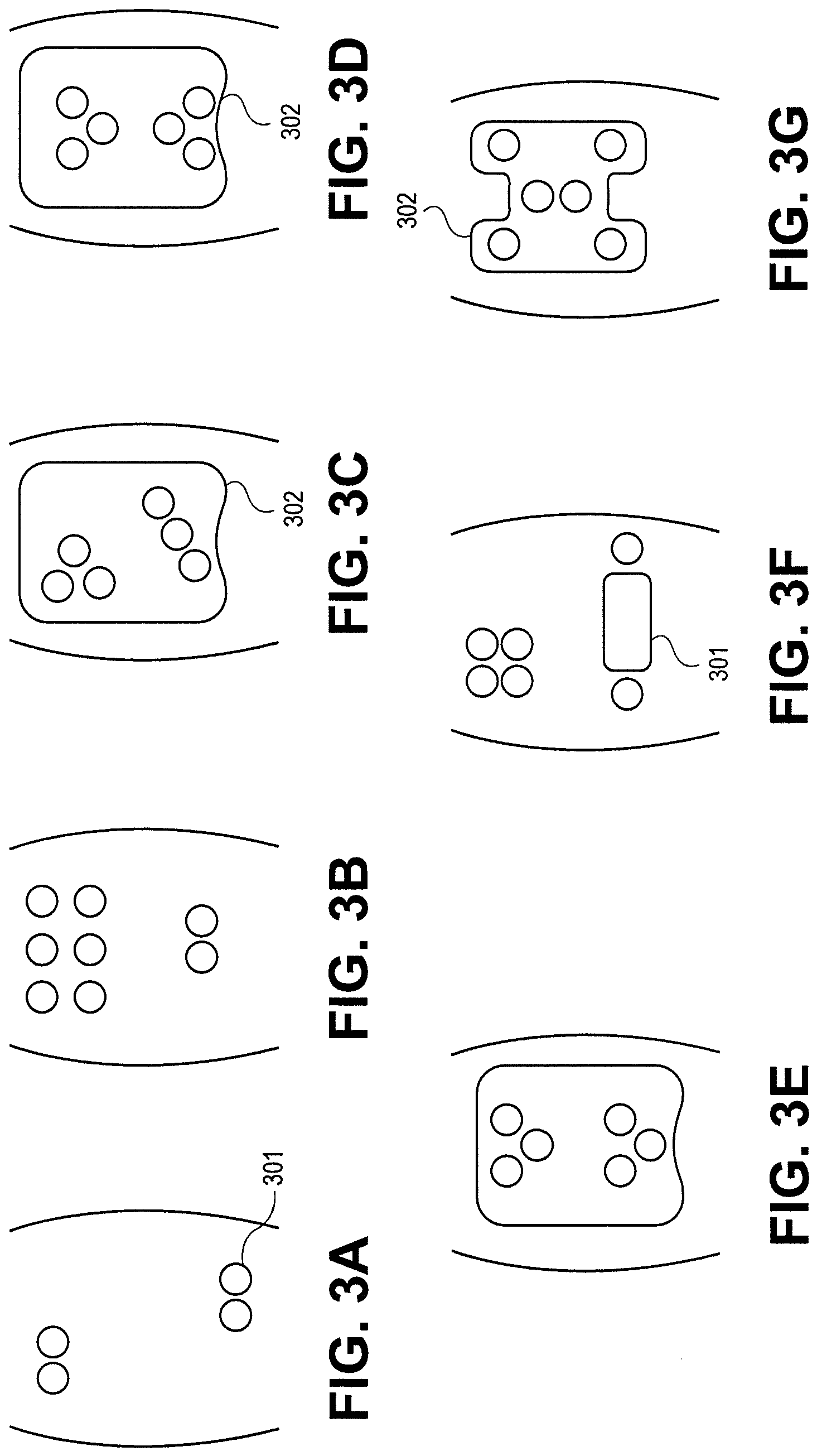 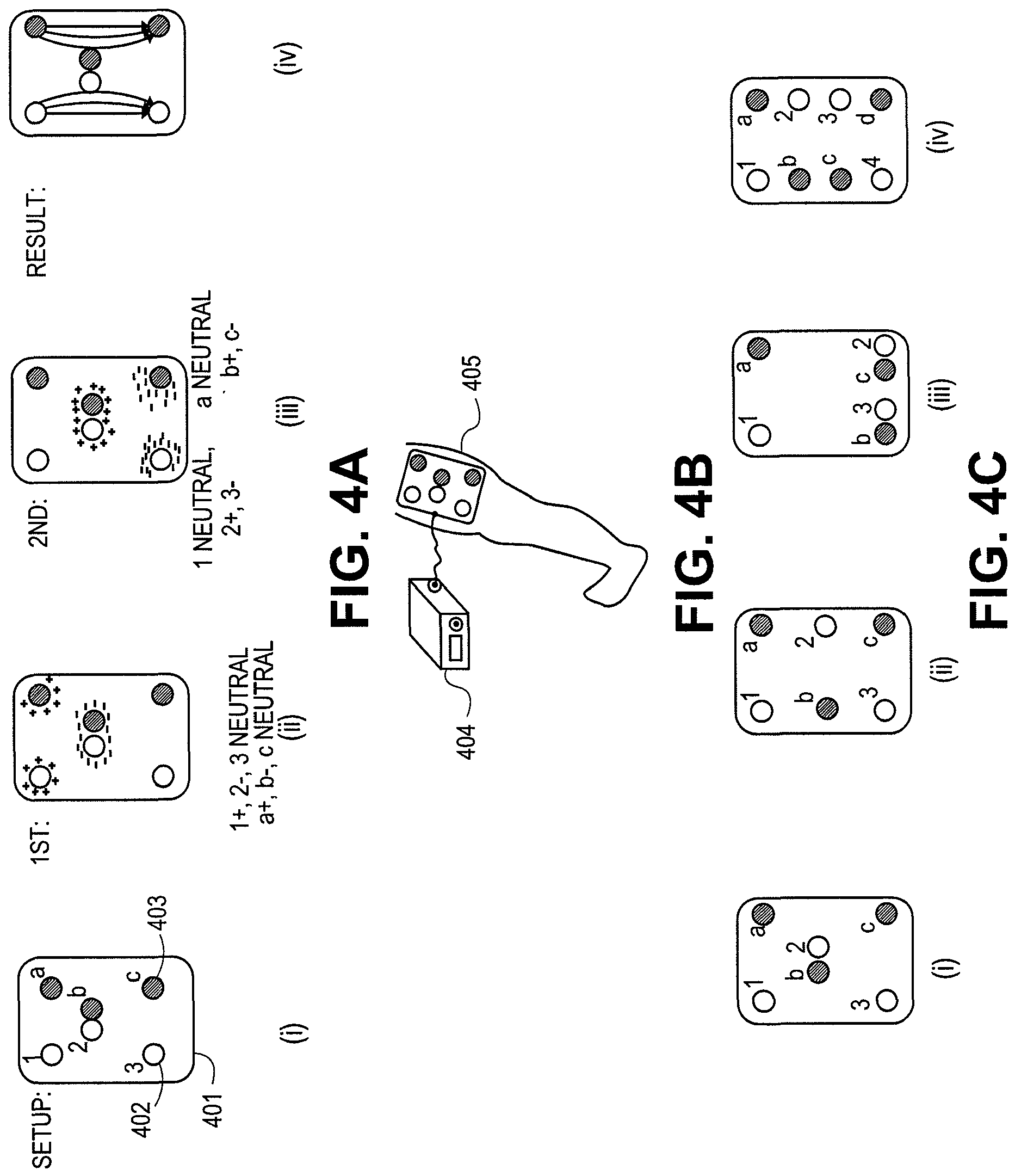 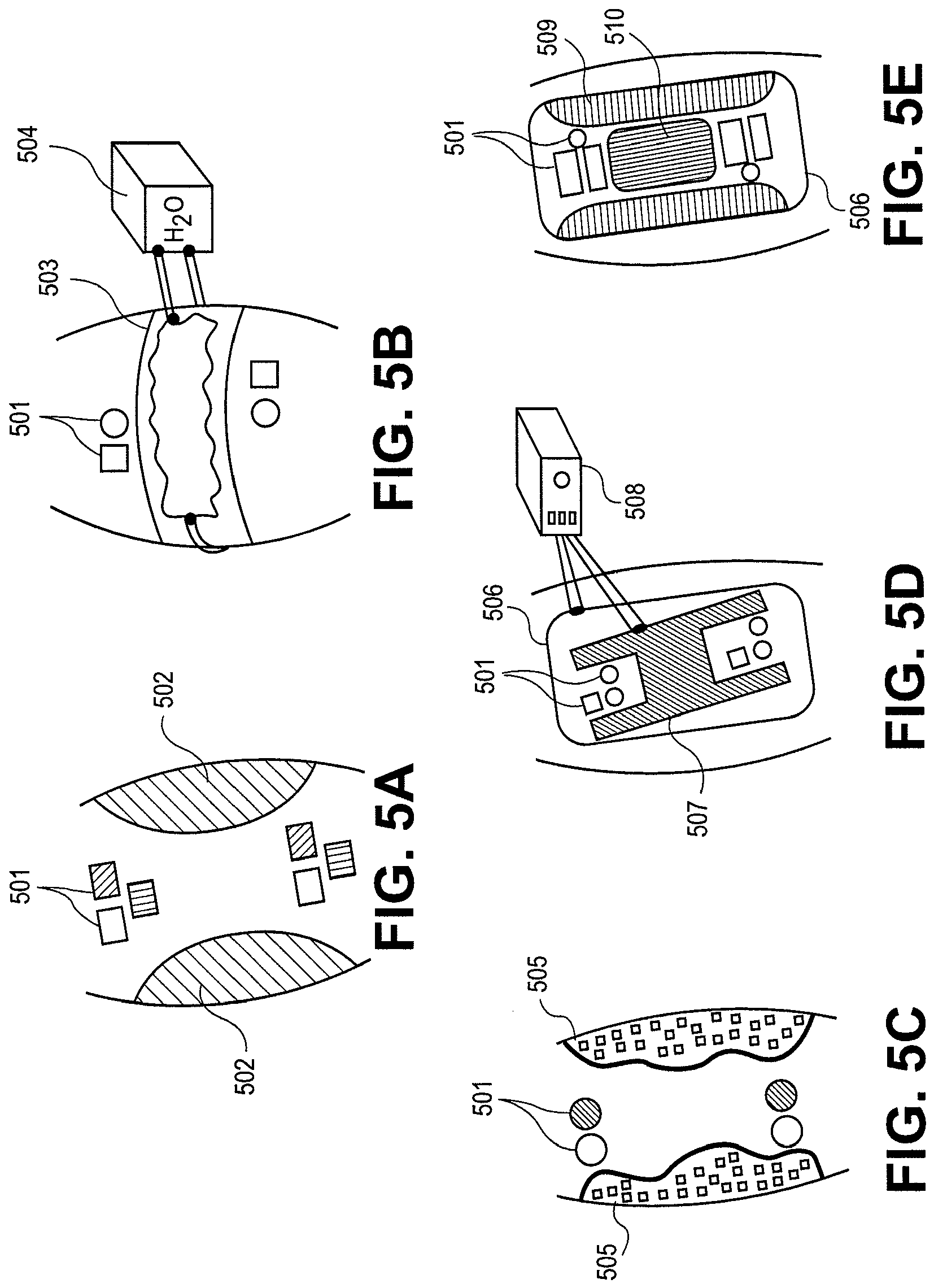 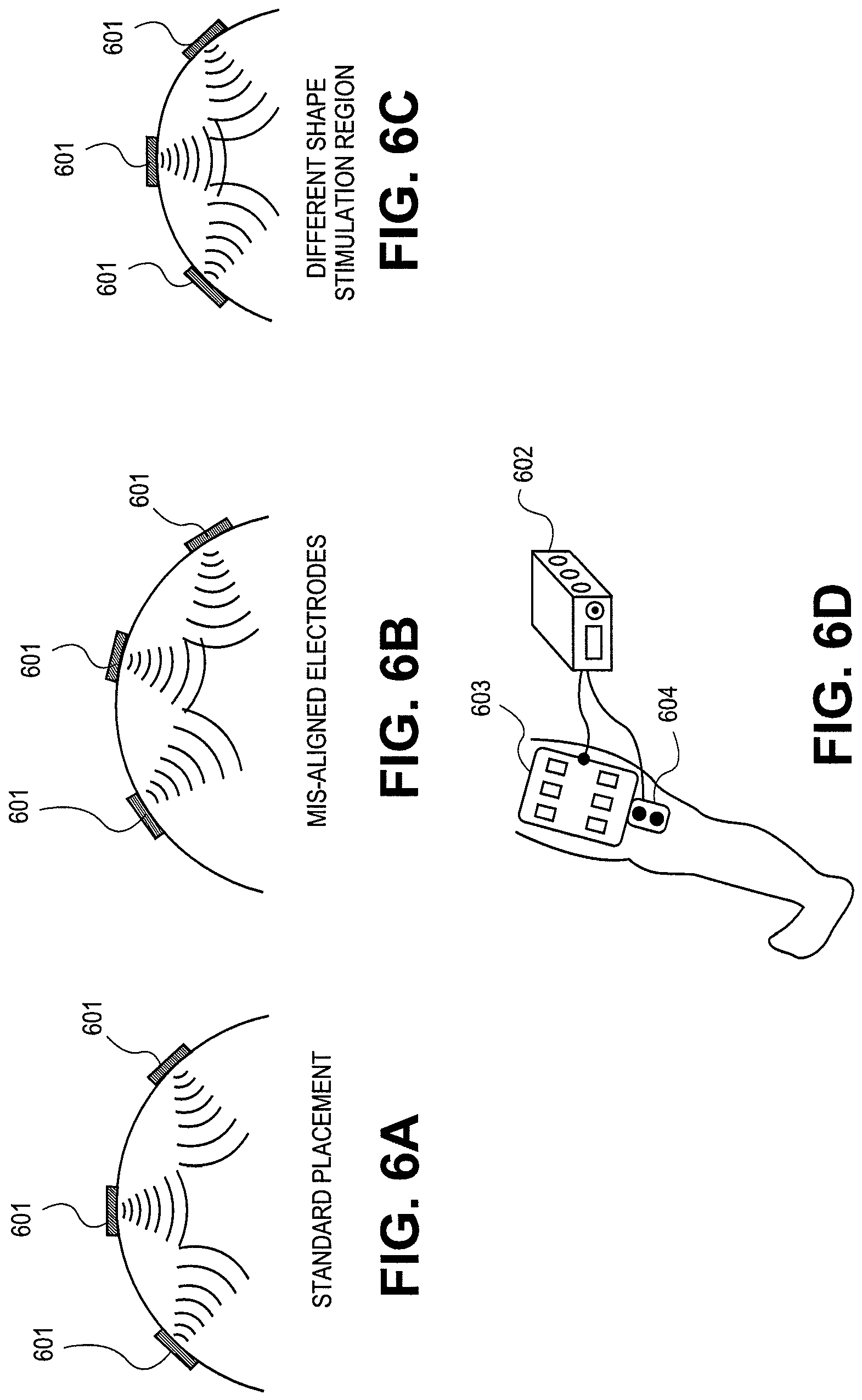 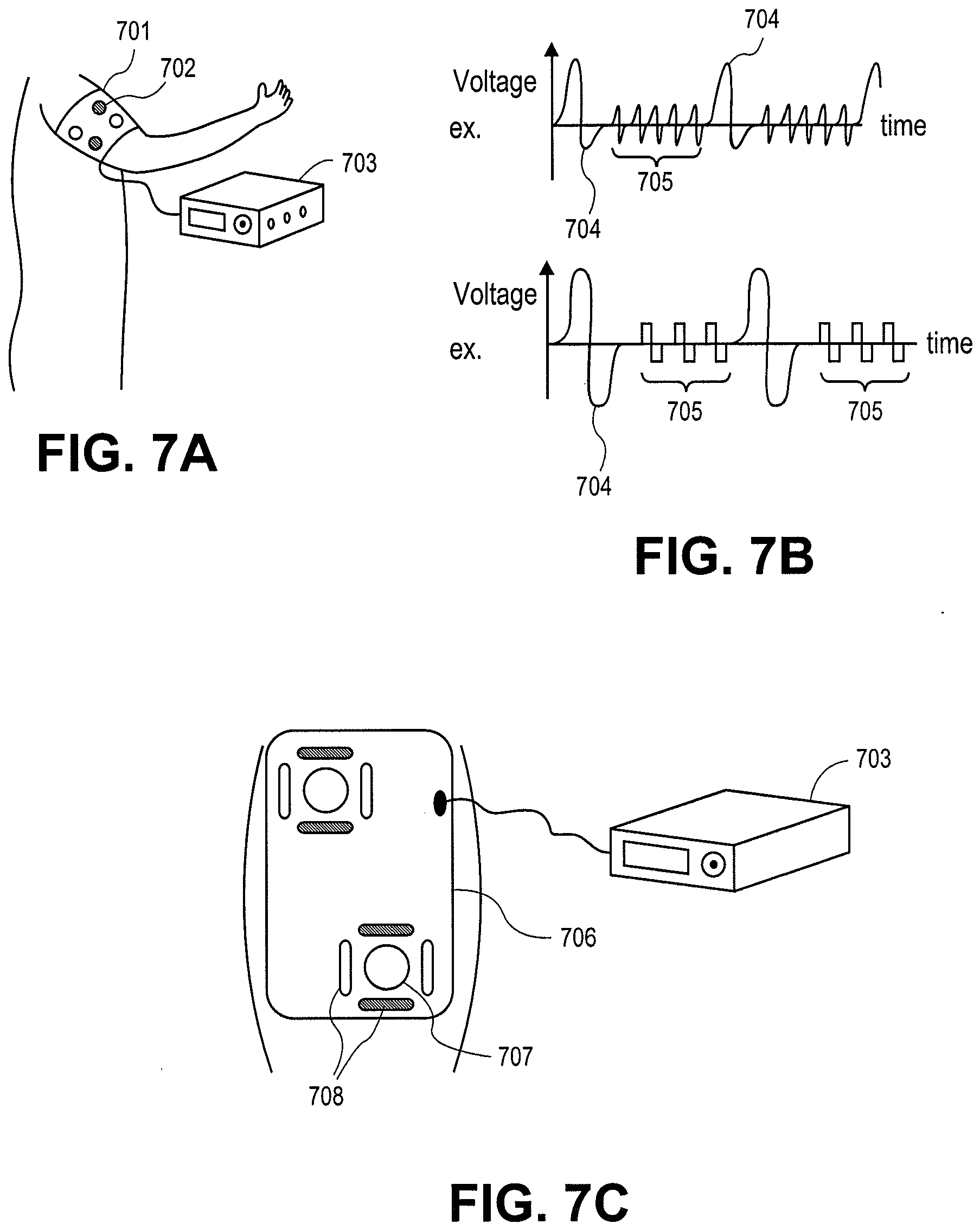