[0001] The above stated invention is for patients with faecal / urinary incontinence. It is an auxiliary device in the form of a collection bag that is glued to the skin around the anus and which is made of suitable and skin-friendly plastic.
[0002] The collection bag is designed as a simple, funnel-like bag that has openings at both ends. These ends are easily sealed.
[0003] The design eliminates or substantially reduces direct contact with the faeces and thereby reduces the risk of contamination.
[0004] The collection bag is equipped with channels for rinsing with water and the application of ointment and odor removal.
[0005] This design will allow the collection bag to be used continuously for several days.
[0006] The collection bag can be used of both male and female patients with faecal incontinence with no need for any modification. The collection bag may, with some slight modifications, be used for urinary incontinence.
[0007] Other areas of use to be considered are heavy menstrual bleeding or bleeding while giving birth.

[0008] Present day collection bags are usually one-use disposable collection bags that are discarded / destroyed after use. These collection bags are sealed only at one end. This results in the unhygienic handling of faeces that increases the risk of contamination.
[0009] Previously known collection bags for faecal incontinence are:
[0010] These bags use a sealing agent of the traditional type.
[0011] To prevent accidental leakage of the collection bag a glue I adhesive of a type that is relatively difficult to remove without the patient feeling discomfort is used.

3. SUMMARY OF THE ABOVE STATED INVENTION

[0012] The collecting bag for patients with faecal incontinence, according to the above stated invention, is designed to provide a single, sealable and washable bag that can be used for either several day or one-day use. In addition, the bag allows for drying and the application of skin care products on the patient.
[0013] The elongated collection bag is designed so that it can be used by both sexes.
[0014] With minor adjustment it can also be used for urinary incontinence.
[0015] After use, the bag can easily be sealed, and in a hygienic manner can either be designated for disposal or reuse.
[0016] The use of light-sensitive adhesive in this invention allows for the painless removal of this collection bag from the patient's body.

4. A SHORT DESCRIPTION OF THE INVENTION

[0017] The invention described in this patent claim will sweep aside the aforementioned drawbacks of the known technology.
[0018] The collection bag includes a slotted, with glue I adhesive coated, fastening top. The fastening top is joined together with the elongated and funnel-shaped collection bag. The bag is closed with an upside-down funnel-like exit.
[0019] The slotted top fastening is, via a strip of suitable length, connected to a lid of similar size (not slotted), intended for sealing the slotted top.
[0020] The connection and lid are provided with channels for rinsing with water, drying with hot air, and for the application of skin ointment.
[0021] At the point of contact a skin friendly adhesive is situated, the objective of this adhesive is to create an effective seal around the anus opening.
[0022] The adhesive agent used in this invention consists of a light-sensitive adhesive / glue, which after illumination loses its adhesive qualities and then releases the bag from the patient's skin without pain and without mess.
[0023] The lid is fitted with a skin-friendly adhesive, with slightly lower adhesive qualities.
[0024] The lid is used for sealing the slotted top, to allow for the hygienic and contamination safe removal of the collection bag.
[0025] Another purpose of the invention is to provide a collection bag that can be attached to the body. The bag's design, compliance and extensibility means that it is stuck on at the time of use, without the patient being exposed to pain or discomfort at the time of placement or removal. Other distinguishing features are that the collection bag is provided with channels for water rinsing, the blowing of hot air, and the application of skin ointment.
[0026] The channel for water rinsing can also be used for odorless gas ventilation, using a deodorising filter.
[0027] Furthermore, the purpose of the invention is to provide a collection bag whereby the slotted fitting top will automatically fit both male and female patients without any adjustment.

5. BRIEF DESCRIPTION OF THE DRAWINGS

[0028] The invention will be further described by way of example, with reference to the attached drawings, where:

Figure 1 shows a perspective of the funnel-shaped collection bag with its carrying strap and seal at the bottom together with its plastic clip. At the top the lid is closed. The lid highlights the connection possibilities for water / air rinsing and the application of skin ointment.
The image also shows the de-odorising filter and the sealing cone for the skin ointment channel.

Fig.3 shows a side view of the bottom, together with a plastic clip, and sealed collection bag.

Fig.4 shows the frontal view of the collection bag.

Fig.5 shows a side view of the collection bag wall folded and prepared for hot-sealing / bonding / gluing.

Fig.6 shows in perspective, the collection bag's components (the funnel-like bag, the slotted top, carrying strap and lid), the components having been welded/ glued together according to a specific pattern, forming channels for water rinsing, hot air blowing and the application of skin ointment.

Figure 7 shows in perspective one of the alternative designs for the collection bag and its components.

Figure 8 shows a view of the slotted top with a carrying strap and all the channels illustrated.

Figure 9 shows a detailed section of the slotted top flap in unaffected condition.

Figure 10 shows a detailed section of the slotted top flap in affected state, where the flap has been exposed to water/ air pressure.

Figure 11 shows a portion of the slotted top and its flaps where each weld / bonded joint is shown in a view from above.

Figure 12 shows in a view from above of an alternative design of the slotted top, carrying strap and lid.

Figure 13 shows an alternative view of the slotted top flap in unaffected condition.

Figure 14 shows an alternative view of the design of the slotted flap peak, in the affected state, after the flap has been exposed to water/ air pressure.

Figure 15 shows a part of the slotted top, with its flaps and the respective welding/ gluing points in a view from above.

1. A collection bag designed for faecal / urinary incontinence made of skin-friendly thermoplastic film comprising two preferably identical sheets (1) connected together at their edges (11) forming an elongated bag, characterized in that
said bag comprises an upside down turned funnel (12) at one end which is equipped with a replaceable sponge-like stopper (S) and hose clamp (K), and
a slotted lower top (2) merged into the other end, wherein the slotted lower top (2) comprises slits/flaps (5) and is connected via a lower carrying strap (3) with a lower lid (4), the lower top (2) further being connected to a corresponding grooved upper top (6) equipped with slits/flaps (5) and apertures (53), an upper carrying strap (7), and an upper lid (8) by means of heat sealing/welding or glue, such that a rinse channel (9) with a conical channel opening (91), and a skin ointment channel (10) with a conical connection (101) are formed there between,
wherein

the slits/flaps (5) of the lower and upper tops are bonded together at their edges (51), thereby forming self-closing flaps (5);

the upper top (6) is covered with a light-sensitive adhesive along its ring shaped periphery, and said adhesive on the upper top (6), upper carrying strap (7) and upper lid (8) is protected with a cover sheet (14) on a top thereof; and

a ring shaped self- adhesive light-restricting ring sheet (13) is arranged on the underside of the lower top (2), whereby removal of said ring sheet (13) allows illumination with a suitable light source of the skin attached surface of lower top (2) or upper top (6) to loosen the collection bag. 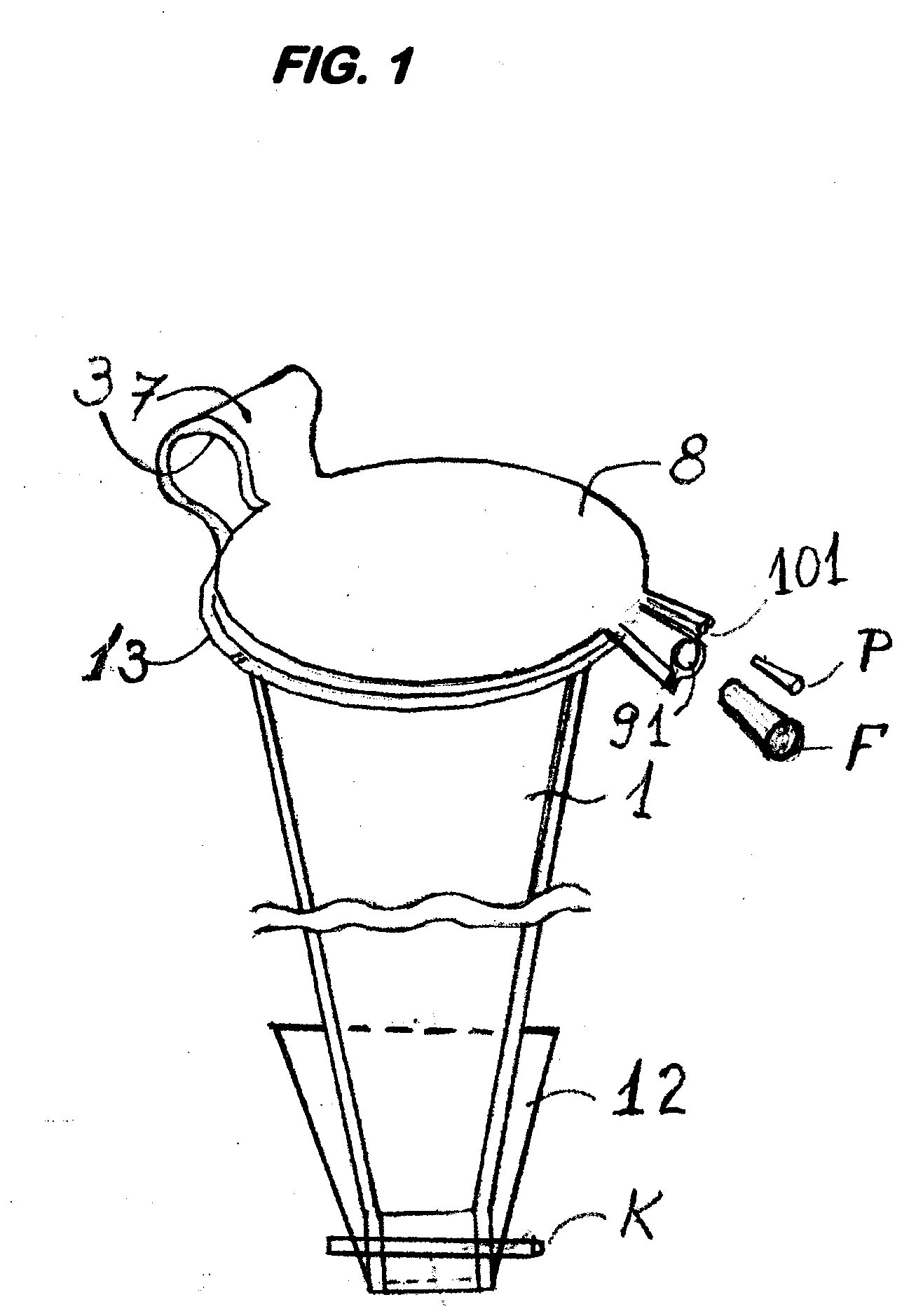 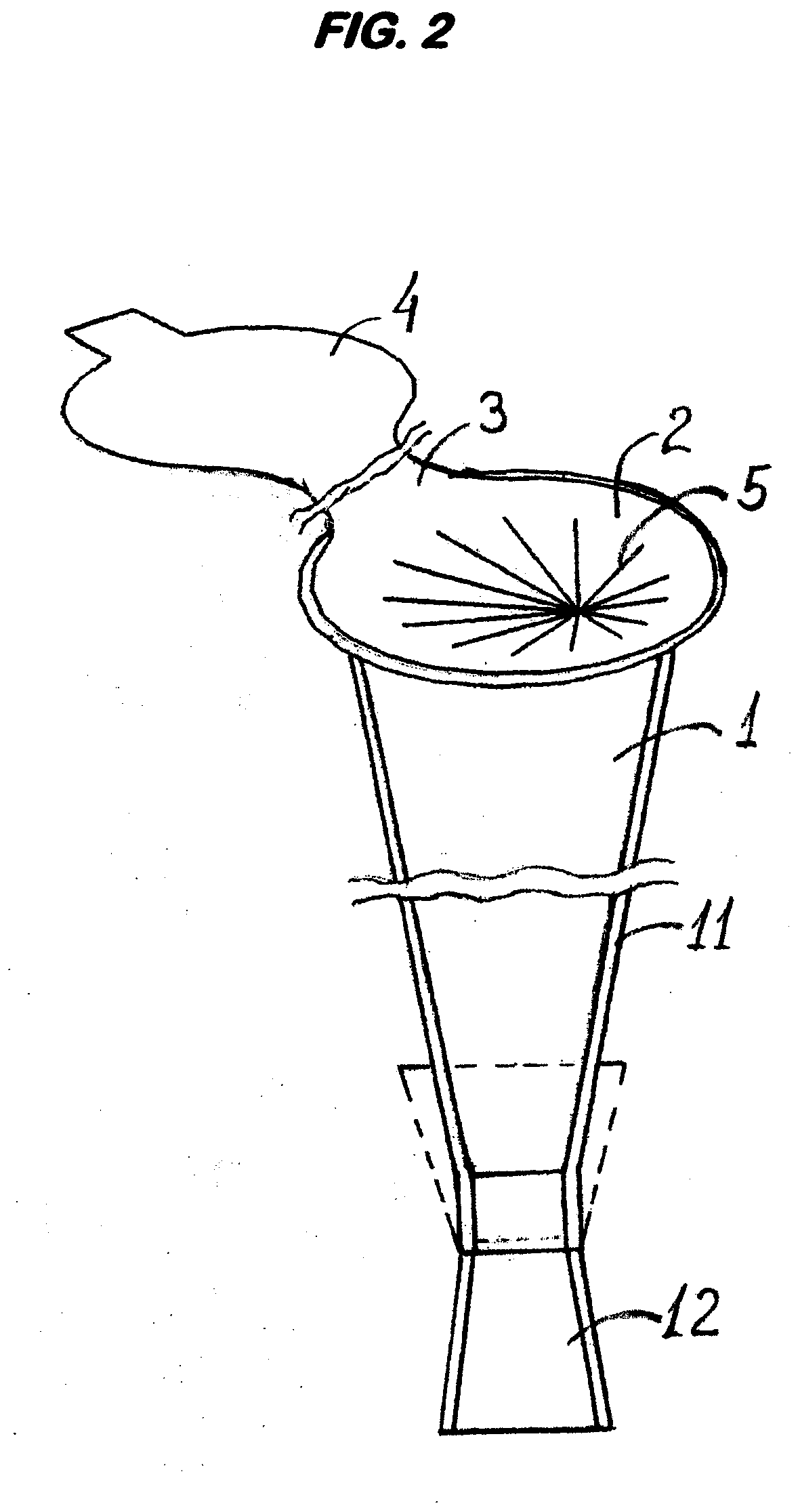 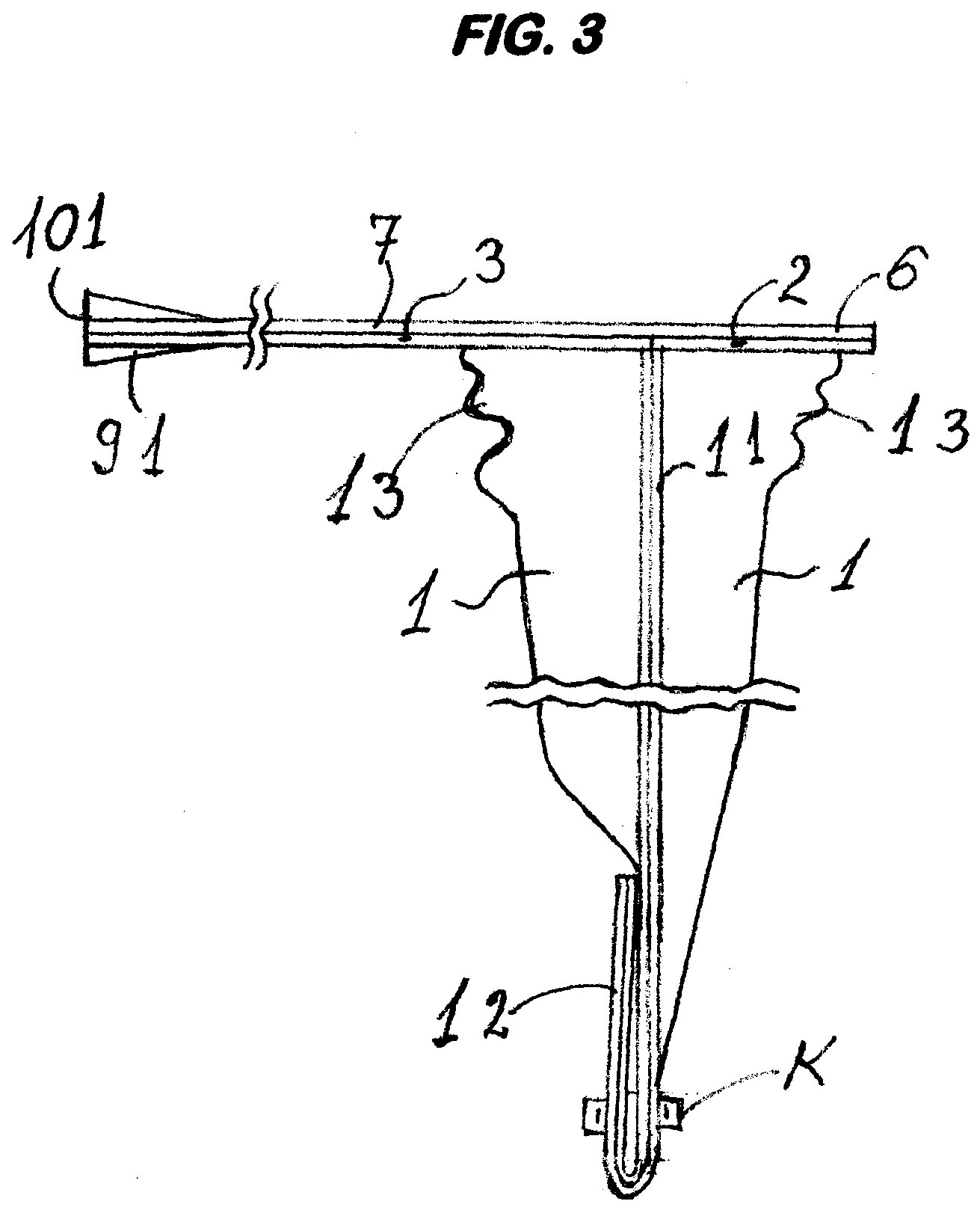 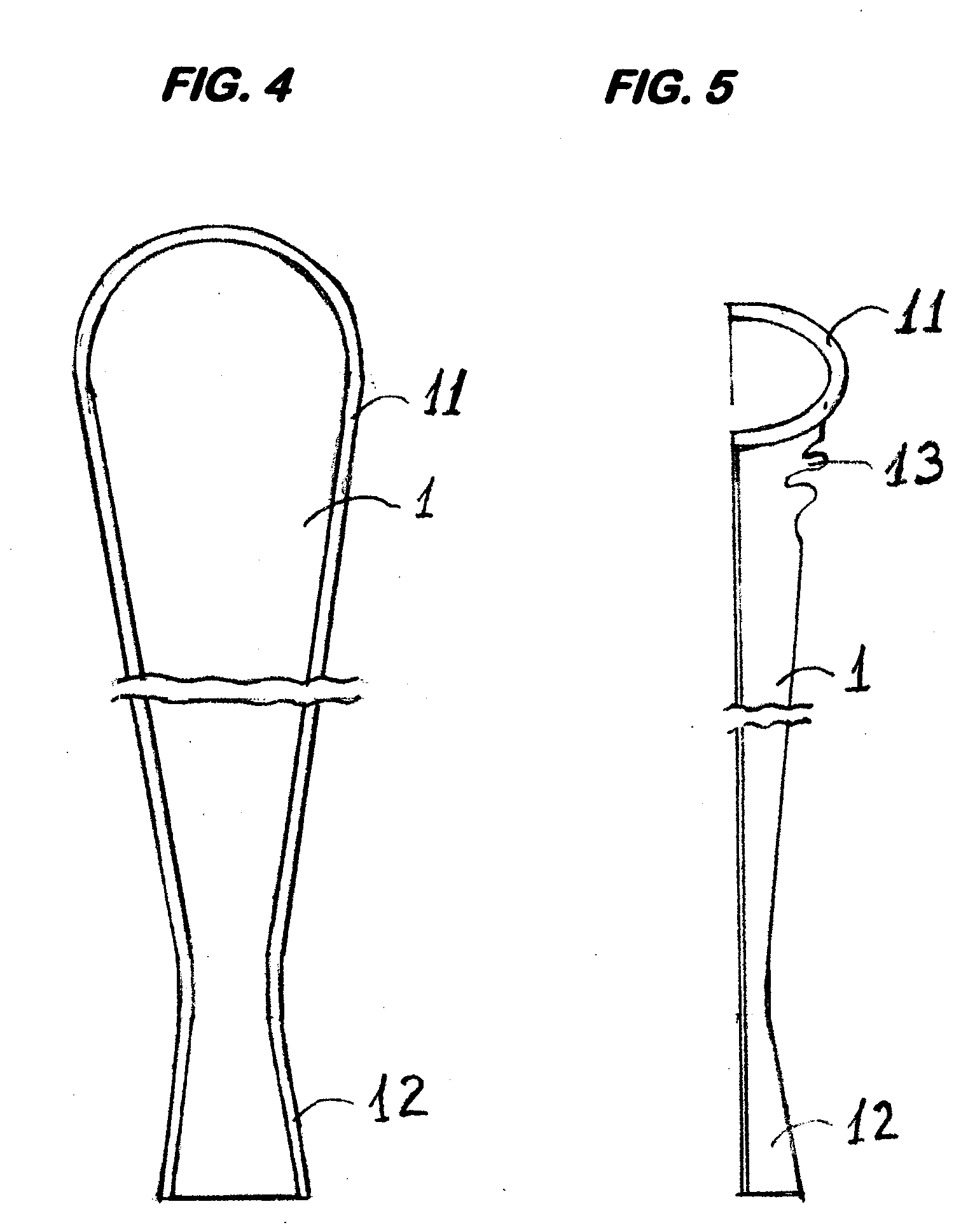 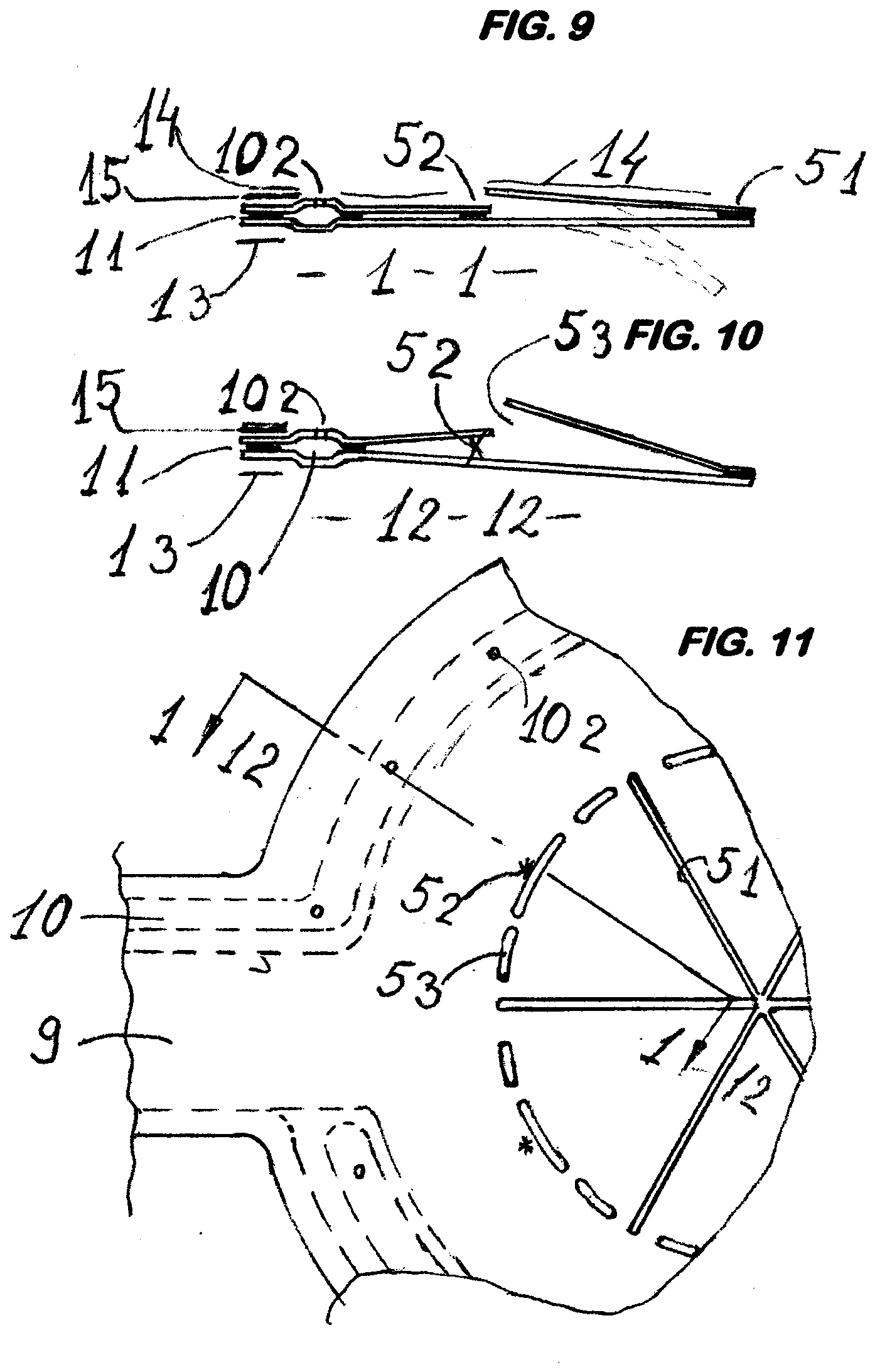 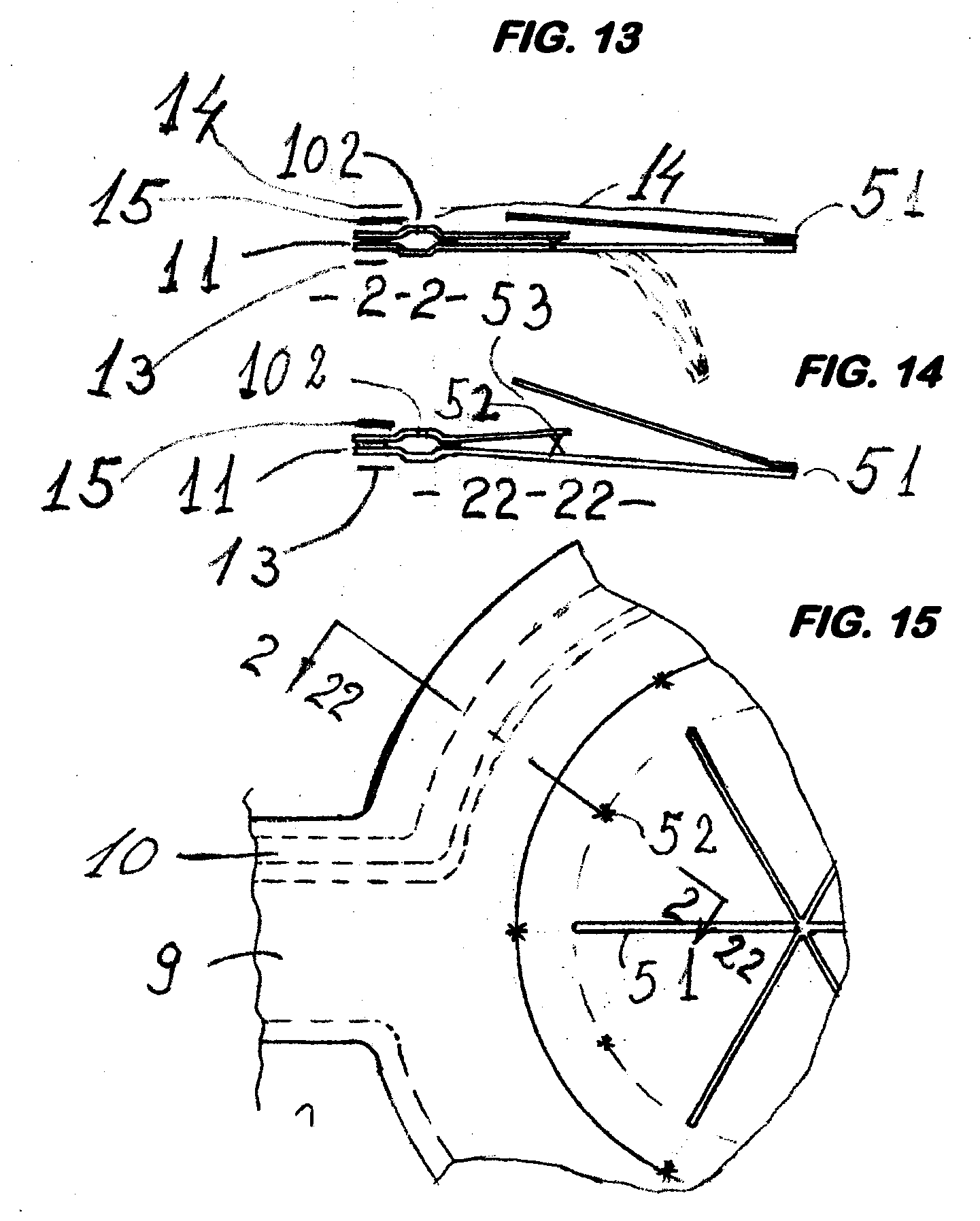 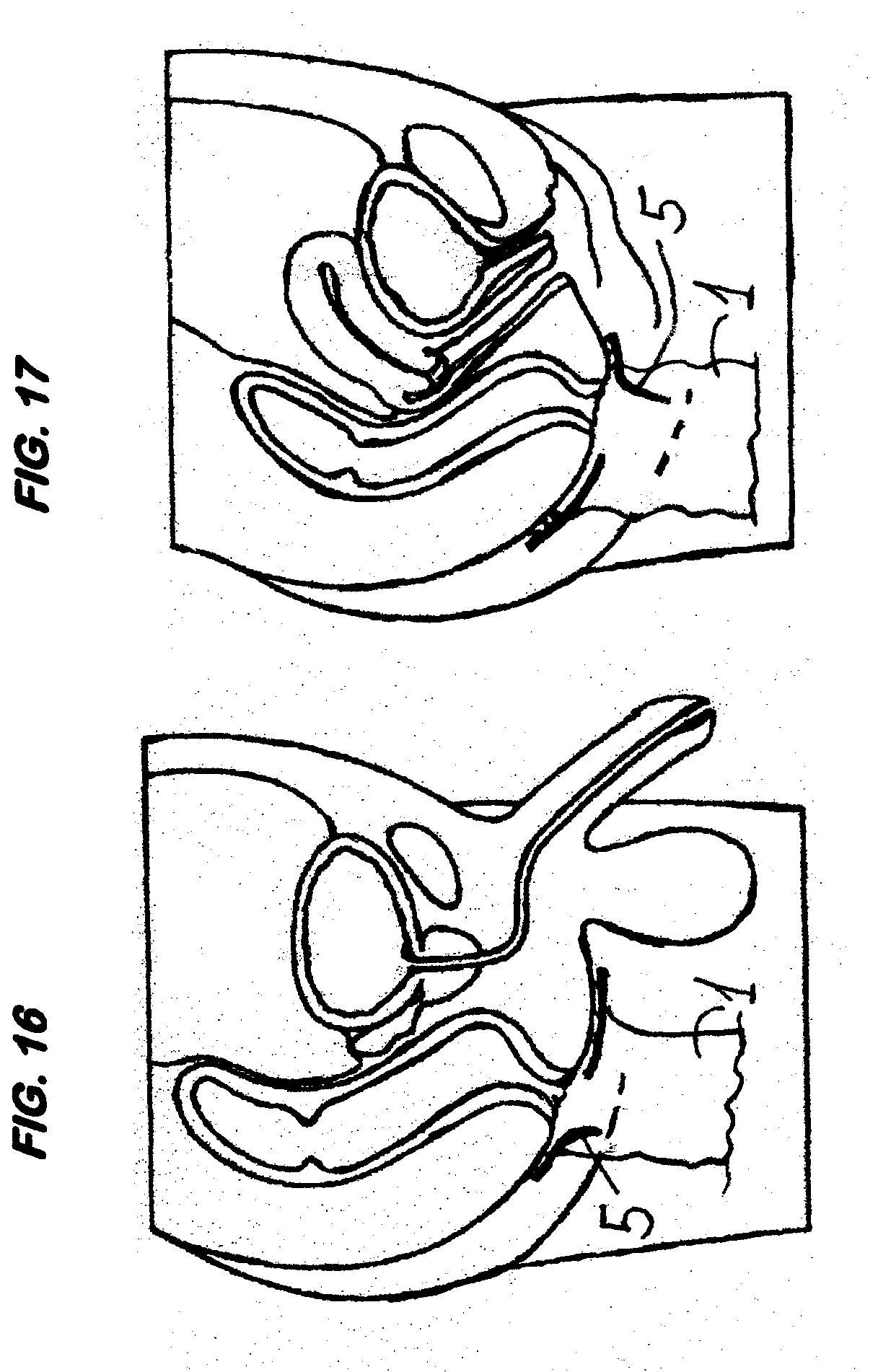 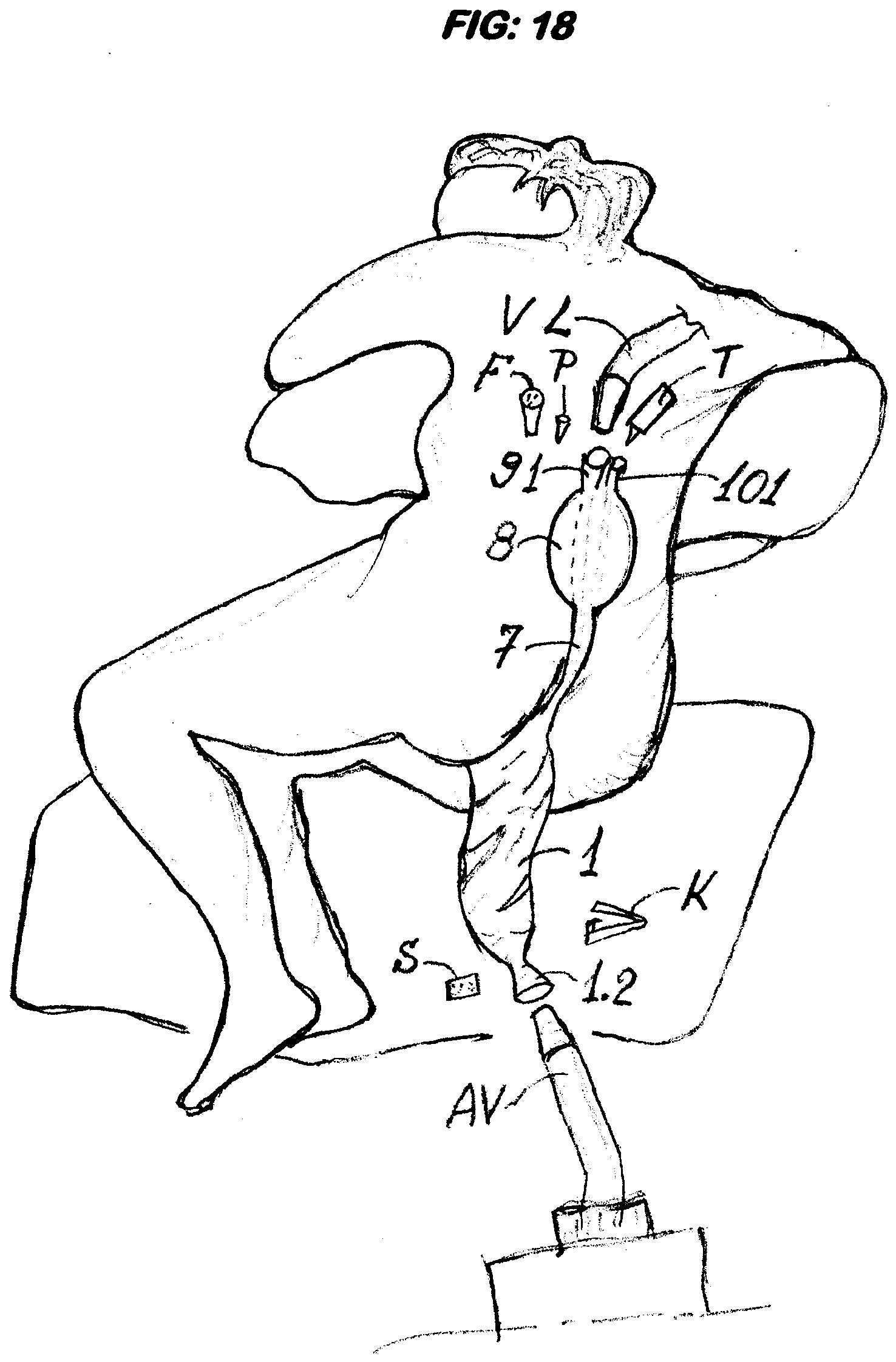 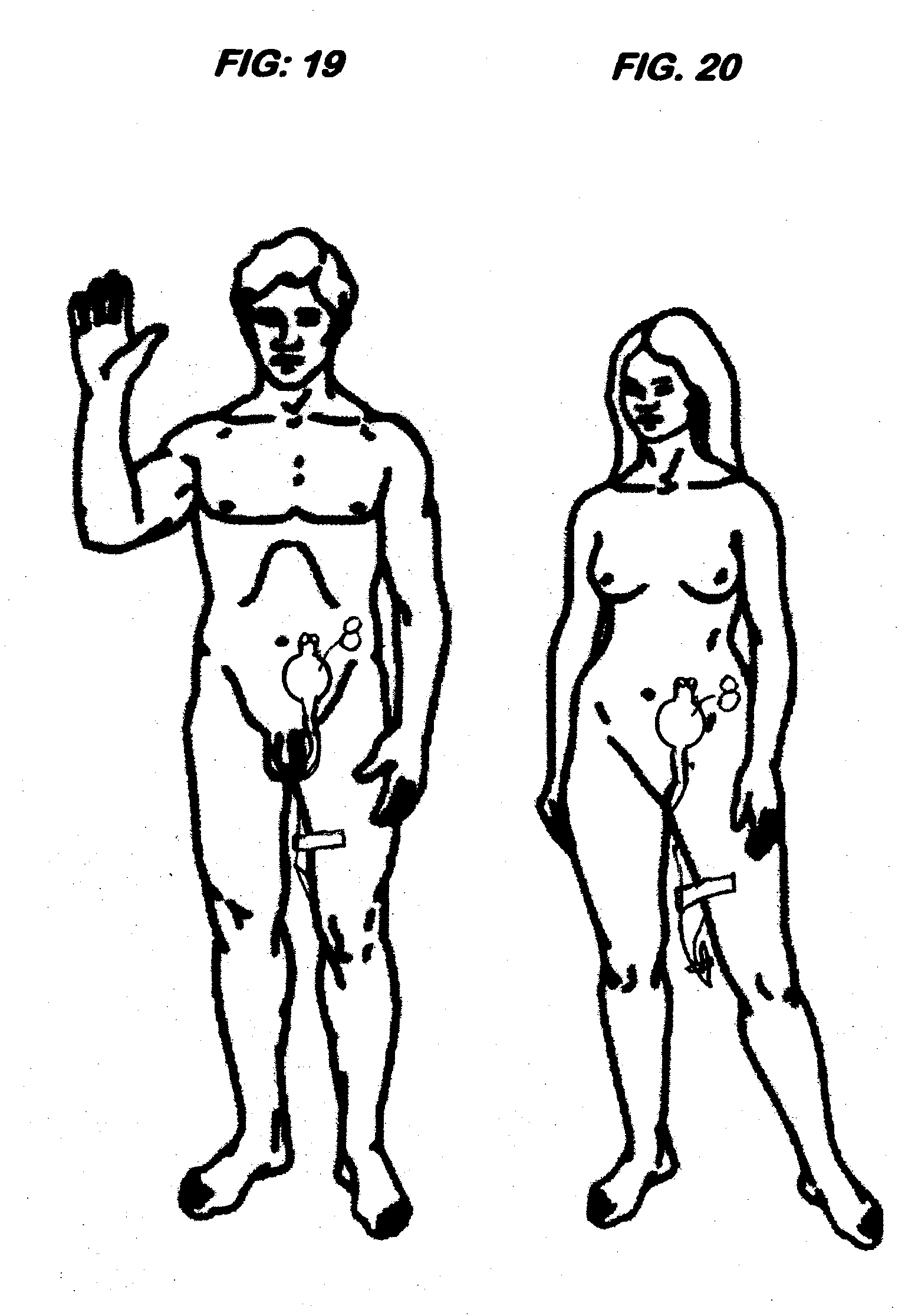