[0001] The invention relates to the field of chemical modeling and design.

[0002] The volume and types of data produced by biological science and theoretical chemistry are vast. Such fields as protein conformation, chemical and protein structure and activity; genomic sequences, gene expression and phenotype; and population and disease incidence and prevalence yield large amounts of interrelated data that must be organized and interpreted to be useful.
[0003] A variety of methods have been designed to "cluster", or organize, large amounts of technical data, including that relating to three-dimensional molecular forms.
[0004] Algorithms are used to perform the enormous number of decision-making steps required to organize shape data. Examples include: "DBSCAN", proposed by Martin Ester, Hans-Peter Kriegel, Jörg Sander, Xiaowei Xu in Proceedings of the Second International Conference on Knowledge Discovery and Data Mining (KDD-96): 226-231, in 1996; "OPTICS", proposed by M. Ankerst et al. Proc. ACM SIGMOI'99 Int. Conf. on Management of Data, Philadelphia PA, 1999; "K-means", proposed by J. A. Hartigan et al in "A K-Means Clustering Algorithm". Applied Statistics 28 (1): 100-108, 1979; "K-medoid", referenced at http://en.wikipedia.org/wiki/K-medoids; "FLAME" proposed by L. Fu et al. in BMC Bioinformatics 2007, 8:3, 2007; "G_cluster / grooms" proposed by Daura et al. in Angew. Chem. Int. Ed. 1999, 38, pp 236-240, 1999; "DCBOR", proposed by A.M.Fahim, G.Saake, A.M.Salem, F.A.Torkeyand, M.A.Ramadan, in Proceedings of World Academy of Science, Engineering and Technology, Vol. 35, November 2008; "DENCLUE", proposed by Alexander Hinneburg and Daniel A Keim in An Efficient Approach to Clustering in Large Multimedia Databases with Noise. Institute of Computer Science University of Halle Germany, 1998; "SUBCLU", Karin Kailing, Hans-Peter Kriegel and Peer Kröger In Proc. SIAM Int. Conf. on Data Mining (SDM'04), pp. 246-257, 200, 2004; and CLIQUE, proposed by Rakesh Agrawal, Johannes Gehrke, Dimitrios Gunopulos, and Prabhakar Raghavan of IBM Almaden Research Center, 1998.
[0005] These methods have various limitations, such as being unable to cluster data with varying densities across a volume, yielding inconsistent results depending on the input order, producing clusters based on shape and not density, or being confined to smaller datasets. Of these, FLAME and DENCLUE share the advantage of having only one required parameter and defining arbitrarily-shaped clusters.
[0006] The FLAME algorithm starts with a neighborhood graph to connect each data point to its K-nearest neighbors, estimates a density for each object based on its proximities to its K-nearest neighbors, and any data point with a density higher than all its neighbors is assigned full membership to itself. Remaining data points are assigned equal membership weights to all clusters defined, and then membership weights are updated for all points as a linear combination of the membership weights of its neighbors. This process is iterated to convergence, whereupon each object is assigned to the cluster in which it has the highest membership. FLAME needs many iterations and is inefficient and time consuming.
[0007] In DENCLUE, each data point is assigned an influence function that determines the effect of itself on the surrounding areas. A typical influence function can be a Gaussian distribution centered around the point. The algorithm sums together the influence functions of all points and then proceeds to find local maxima on this new hypersurface. Cluster centers are located at these maxima. The cluster to which points belong is found via a steepest ascent procedure on this hypersurface. An efficient implementation of this algorithm is very complex.
[0008] US Patent No. 6,226,408 by Sirosh discloses an unsupervised learning routine for use in analyzing credit card transactions for fraudulent activity. A number of data types are converted to numerical values and grouped accordingly.
[0009] Kim et al. (J. Chem. Inf. Model. 2009, 49, 2528-2536) describe a density-based algorithm to clustering small peptide conformations after a molecular dynamics simulation.The key idea of the algorithm is that the neighbor density of a conformation must exceed some threshold to be a cluster member. Otherwise, it corresponds to a noise point and is removed. All remaining neighbor conformations that are within a predefined cutoff of a cluster member are iterativelly collected into a cluster.

[0010] In one aspect, the invention provides a method of identifying movement in a protein between conformational states using a density-based clustering algorithm as defined in claim 1.
[0011] The methods of the invention advantageously are density based and do not force a particular shape on clusters. The methods have only one adjustable parameter (preset radius or cutoff distance) and are therefore easy to optimize. The methods further do not presuppose any particular number of clusters, which is determined by the algorithm and does not need to be specified. Additional qualities of the methods include noise tolerance and faster execution than other (more complicated) algorithms. That is, the methods are not adversely affected by noise and are fast compared to other more complicated algorithms. Furthermore, the methods can form clusters of varying densities separated by varying lower density regions.
[0012] The methods of the invention are useful for grouping large amounts of quantitative data into meaningful categories. The methods achieve their goal without using an iterative procedure of a type commonly performed in the literature. This substantially reduces the processing time required and allows them to be run on practical computing systems.

Fig. 1 shows a one-dimensional (1D) data set. The density of each point is plotted against the point's ID coordinate value.

Fig. 2 shows a clustered one-dimensional data set. A cutoff parameter of 0.5 yields the following clustering along with a standard histogram (bin width = 0.5) of the data. Symbols used to outline the clusters from left to right are *, x and +.

Fig. 3 depicts a two-dimensional data set in the form of a Ramachandran plot (phi/psi angles). Phi (x-axis) and psi (y-axis) angles were extracted from a long simulation of trialanine and displayed.

Fig. 4 depicts a two-dimensional data set clustered with a cutoff parameter of 15. The various clusters differ according to shading and symbol used to depict each point.

Fig. 5 shows a two-dimensional data set with the density of the points plotted against the phi and psi angles. Fig. 5 represents Fig. 4 viewed in the direction of the psi angle axis. Thus, in Fig. 5, the x-axis represents the phi angle and the y-axis represents density.

Fig. 6 shows the clustering of conformations of a histidine residue. This is an 18-dimensional dataset (6 atoms, three coordinates each). The cutoff parameter used was 2.

Implementation in a computer system

Demonstration of the method on a simple data set

[0059] A one-dimensional data set that was generated by taking points at random from three superimposed Gaussian distributions is shown in Fig. 1. With a cutoff radius of 0.5, the correct clusters were recovered as confirmed by visual inspection in Fig. 2.

Identifying the different states of a protein

[0060] A Ramachandran plot distribution of phi/psi angles generated from a many nanosecond long computer simulation of trialanine is shown in Fig. 3. Applying the method of the invention to this two dimensional dataset yields the clustering result shown in Fig. 4 when using a preset cutoff of 15. A side view of the density of points vs. phi/psi angles (shaded by cluster) is shown in Fig. 5 and provides an illustration of the how the method of the invention may be applied.

Identifying different conformations of a protein at the amino acid level

[0061] The clustering results for the conformations of a single histidine molecule as observed in a 1 nanosecond trajectory is shown in Fig. 6. Simulation snapshots were aligned based on the protein backbone atoms (C, Cα, N) and clustered based on side chain heavy atom coordinates (x, y, z coordinates for each of 6 atoms - an 18-dimensional data set). The cutoff was set at 2. Two heavily populated clusters are clearly distinguished using the method of the invention.
[0062] The articles "a," "an" and "the" as used herein do not exclude a plural number of the referent, unless context clearly dictates otherwise. The conjunction "or" is not mutually exclusive, unless context clearly dictates otherwise. The term "include" is used to refer to non-exhaustive examples.

1. A computer-implemented method for identifying movement in a protein between conformational states for each amino acid individually of the protein using a trajectory representing the time evolution of the protein, the method comprising:

ii) counting a number of neighboring datapoints within said preset radius and calling this a density at the respective datapoint;

iii) iterating steps i) through ii) to compute the density for all datapoints in the plurality of datapoints; and then

vii) assigning the original datapoint of step iv) to the cluster identified in step vi), and 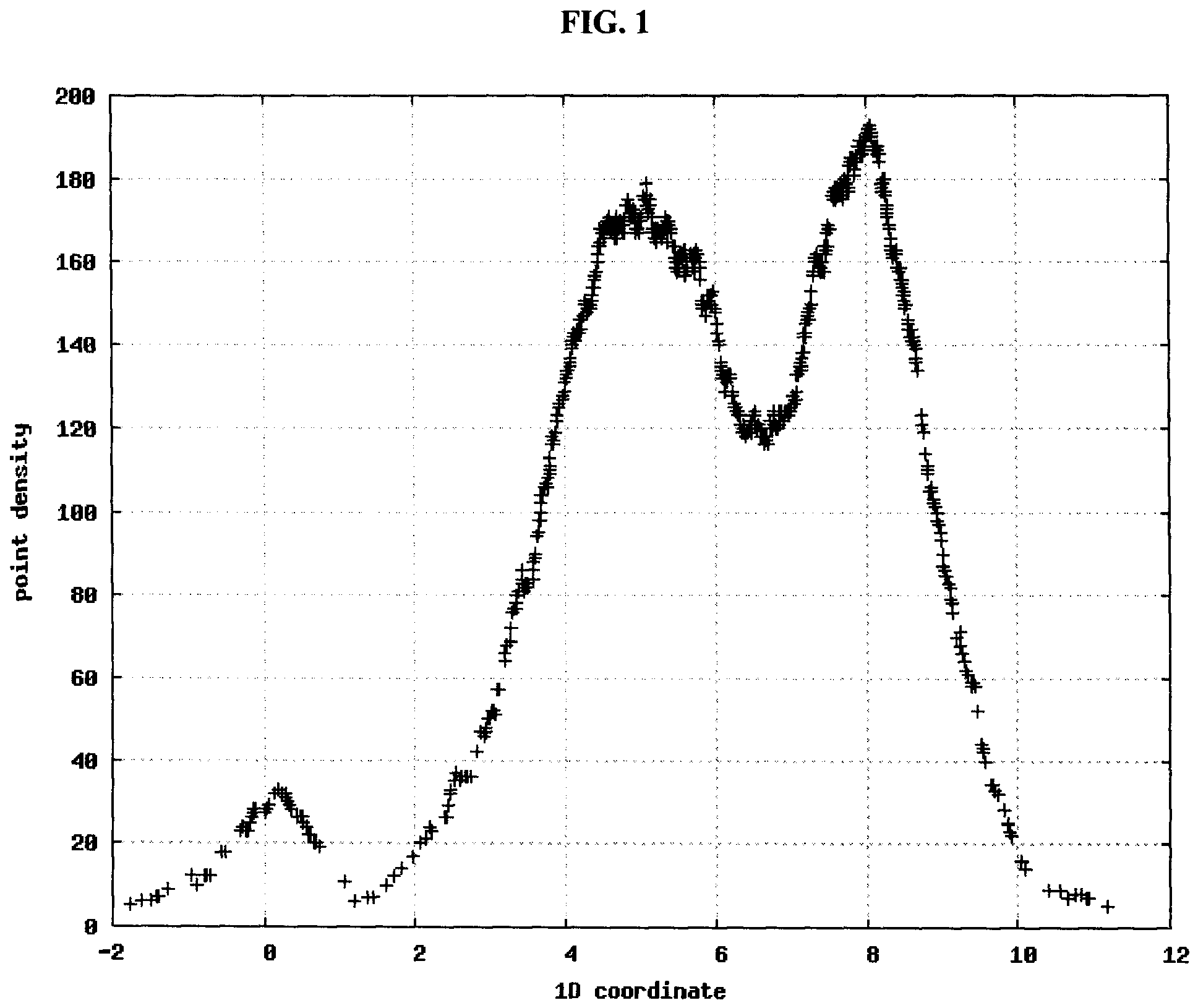 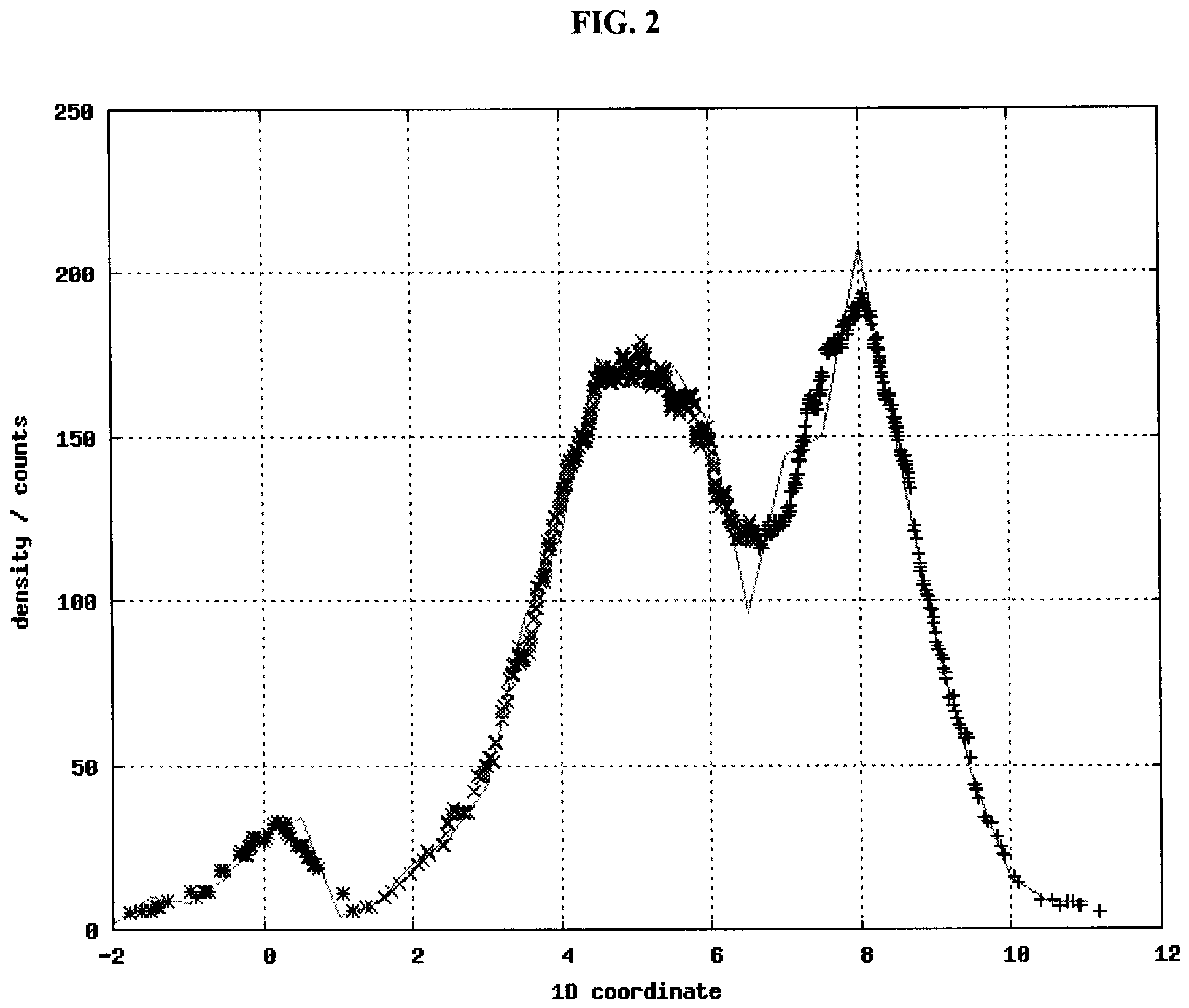 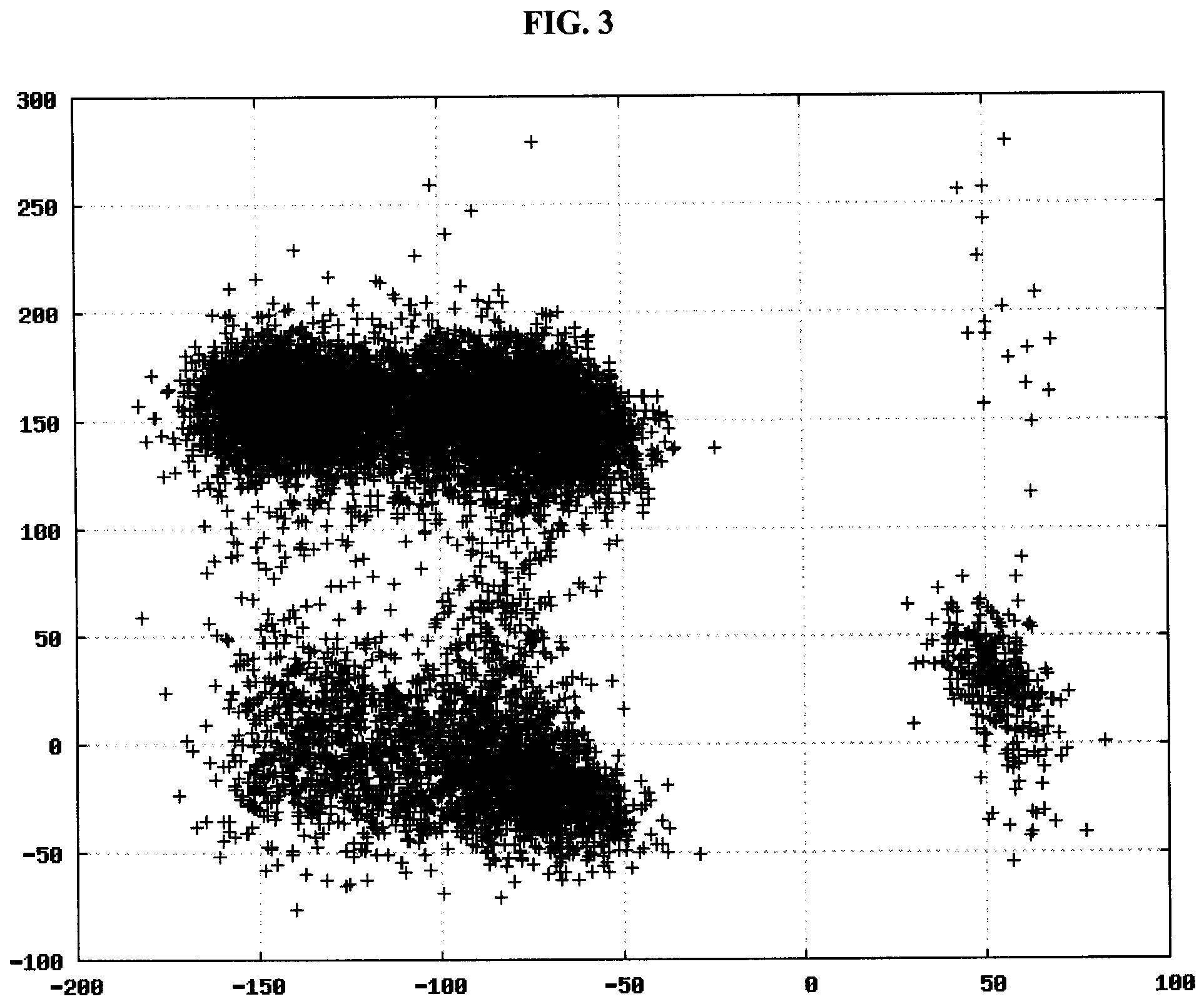 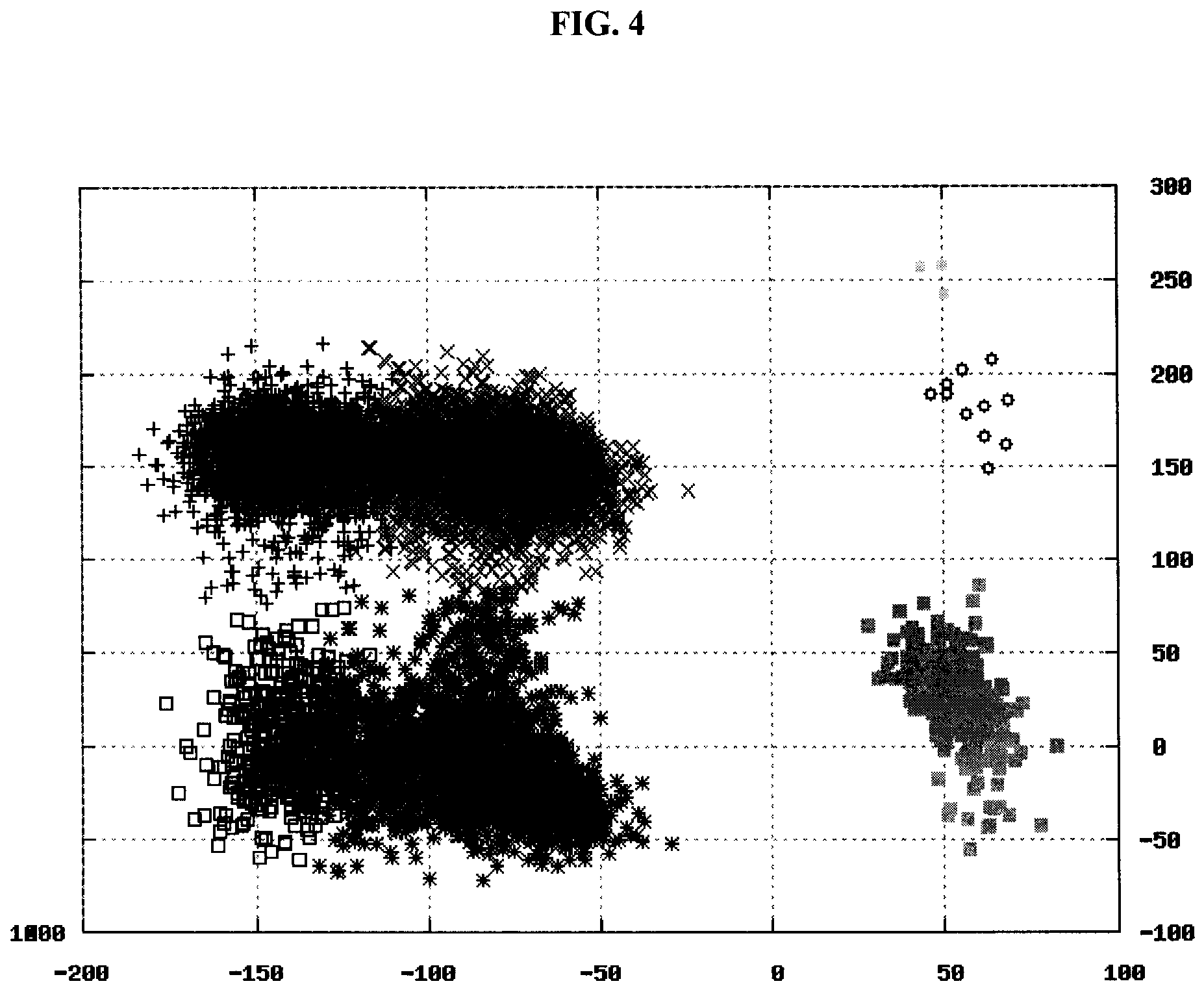 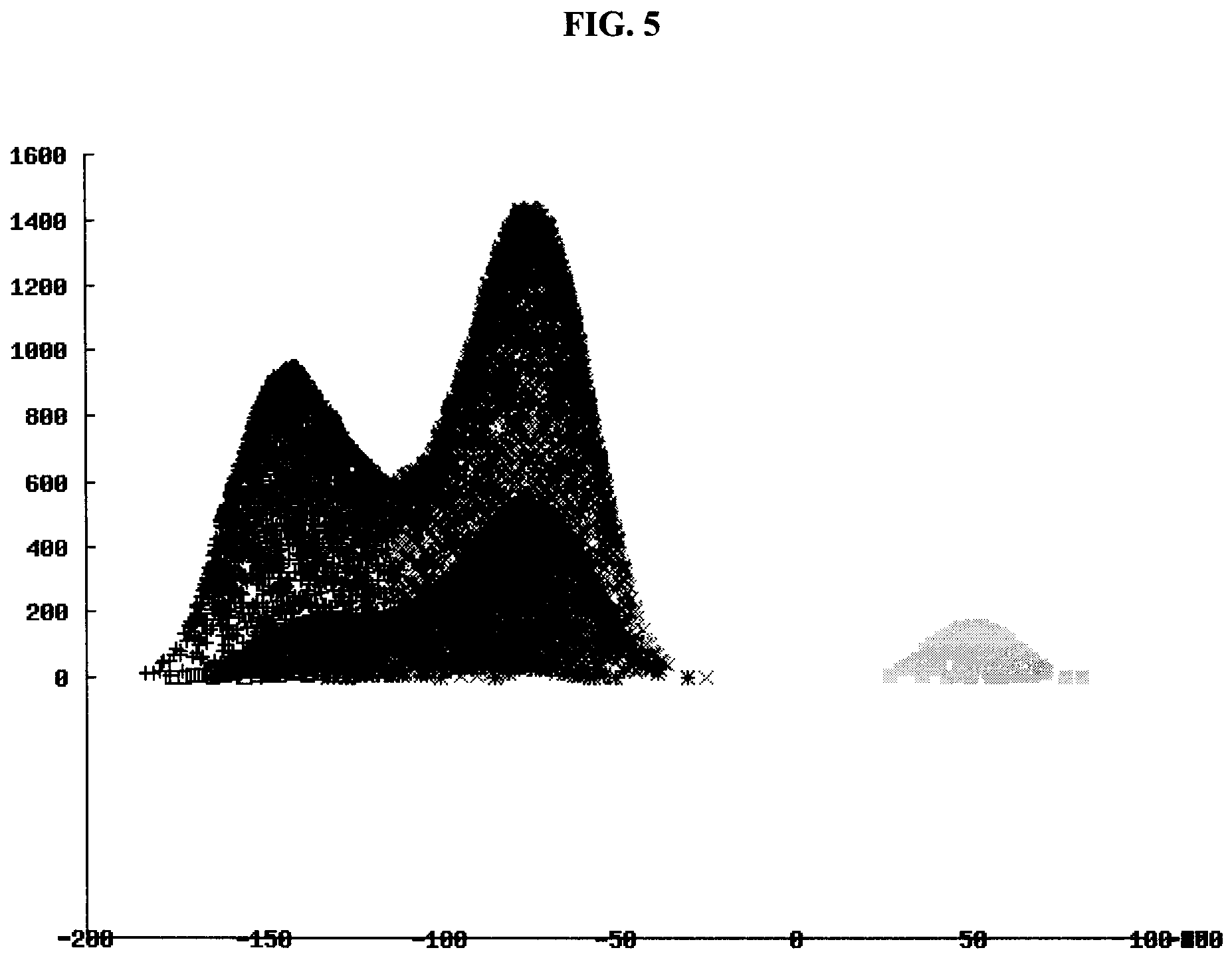 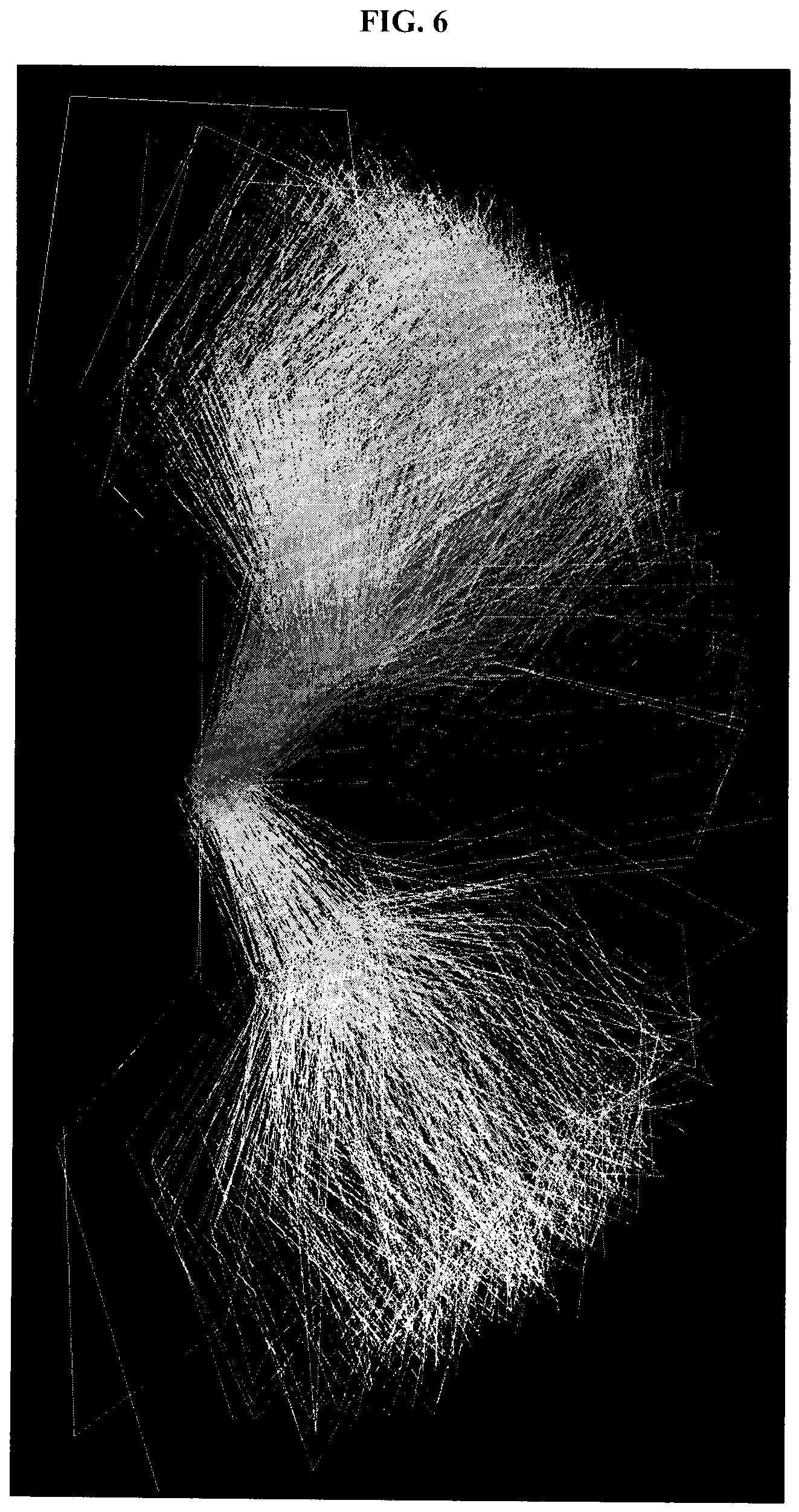