[0001] Complex polysaccharides have been used as pharmaceutical interventions in a number of disease processes, including oncology, inflammatory diseases, and thrombosis. Examples of pharmaceutical interventions in this class are hyaluronic acid, an aid to wound healing and anti-cancer agent, and heparin, a potent anticoagulant and antithrombotic agent. Complex polysaccharides elicit their function primarily through binding soluble protein signaling molecules, including growth factors, cytokines and morphogens present at the cell surface and within the extracellular matrices between cells, as well as their cognate receptors present within this environment. In so doing, these complex polysaccharides effect critical changes in extracellular and intracellular signaling pathways important to cell and tissue function. For example, heparin binds to the coagulation inhibitor antithrombin III promoting its ability to inhibit factor IIa and Xa.

[0009] The drawings are first briefly described.

Figure 2 depicts an expanded 1H 1D-NMR spectra of an unfractionated heparin sodium manufactured using process A (which does not include an oxidative processing step).

Figure 3 depicts an expanded 1H 1D-NMR spectra of an unfractionated heparin sodium manufactured using process B (which includes an oxidative processing step) with the presence of the signal at 2.10 ppm.

Figure 13 depicts an HSQC spectra of PI-HSNAcox. NMR assignments for the oxidized residues are indicated close to the relative contours.

[0018] The disclosure also features a database that correlates the presence or amount of a structural signature associated with a peak in the N-acetyl region of a 1H 1D-NMR spectra, e.g., a peak at 2.08 ppm of Figure 9 and/or the peak at 2.10 ppm of Figure 1, with a method used to make the heparin preparation (e.g., a method that includes oxidation or oxidation followed by treatment with an acid), and use of such a database, e.g., in a method described herein. The term "database" refers to a collection of data. Typically, it is organized so that its contents can easily be accessed, managed, and updated. In one embodiment, the database is configured or managed to ensure its integrity and quality, to minimize content beyond records described herein, and to allow controlled access. The database is presented or memorialized on a medium. The medium can be, e.g., a traditional paper medium or other medium which displays printed or written symbols which can be directly (e.g., without the aid of a computer) used by a human being. Such a database can exist as a set of printed tables, or a card catalogue, which, e.g., show the relationship of the structural signature to the method used to produce the heparin preparation. The database can also be presented or memorialized in electronic or other computer readable form. These embodiments can range from simple spreadsheets to more complex embodiments. The database need not be deposited on a single unit of medium, e.g., in a single table or book, or on a single computer or network. A database, e.g., can combine a traditional medium as described above with a computer-readable medium. Typically, the database will contain a collection of records, wherein each record relates a structural signature to a method of manufacture by way of a correlative function. The database can be organized in a number of ways, e.g., as a relational database. Typically the database is in a format that can be searched for specific information or records by techniques specific to each database. A computer database is typically a structured collection of records stored in a computer or computers so that a program can consult it to answer queries.

[0032] Based on these results, two possible structures that can give rise to the peak at 2.10 ppm have been determined. The structures are:

wherein, in structure B, X = H or SO3.
[0033] Mass spectrometry was applied as an orthogonal analytical technique to support the structural assignment. The mass difference between N-acetylglucosamine and N-acetylglucosaminic acid at the reducing end is expected to be +16 Da. The PI-HSNAcox sample was digested with Heparinase I and analyzed by gel permeation chromatography, followed by mass spectrometry.
[0034] The results showed that some acetylated species have 16 Da higher mass than the corresponding non-oxidized N-acetylglucosamine species (Supplementary Figure 5). This observation further substantiates our claim of an oxidized -COOH moiety present at C1 of the reducing end N-acetylglucosamine.
[0035] Finally, to confirm whether our observations on the model compound (PI-HSNAc) could be extended to unfractionated heparin, UFH lot 2 was subjected to oxidation with potassium permanganate. In unfractionated heparin samples the amount of N-acetylglucosamine at the reducing end is usually very low (below 1% of the total glucosamine content, as estimated by NMR). Therefore, HSQC experiments of heparin acquired with a sufficient number of scans allow detection of a small peak at 5.20/93.4 ppm belonging to α reducing N-acetylglucosamine (Figure 6A). Potassium permanganate oxidation of UFH lot 2 caused disappearance of the α reducing N-acetylglucosamine signal and appearance of cross peaks at 4.37/ 58.9 ppm and 3.88/81.8 ppm (Figure 15). This result demonstrates that, similar to the situation for PI-HSNAc, potassium permanganate oxidation of unfractionated heparin results in the formation of an N-acetylglucosaminic acid residue at the reducing end of the chain.
[0036] Experiments were also conducted to show that certain peaks in the N-acetyl region can result from different chemical processing steps of heparin. For example, periodate oxidized heparin was submitted to acidic treatment. The treatment on an oxidized heparin preparation with an acid resulted in an increase of a peak at 2.08 ppm (Figure 9). Some minor peaks in the 2.10 ppm region were also observed.
[0037] These experiments described above show that the peak at 2.10 ppm in the 1H 1D-NMR spectra of heparin is not OSCS and instead is a characteristic structural signature that is reflective of an oxidative processing step in the manufacture of unfractionated heparin. Based upon the experiments described above, the scheme provided likely results in structures A and B of Figure 16. Oxidation agents, such as KMnO4, react with the reducing N-acetyl glucosamine moieties to generate a modified N-acetylglucosaminic acid residue (Structure A) at the reducing end of the heparin chain. In this situation, the newly formed signal at 4.37 ppm/58.9 ppm in the HSQC spectrum can be assigned to the proton at the C2 position of the newly generated N-acetylglucosaminic acid. It is also possible that further oxidation of this structure may occur, resulting in the formation of a dicarboxylic acid (Structure B), however no confirmation of this structure is provided at present. This scheme (Figure 16), also explains why the appearance of the signal at 2.10 ppm in the 1H-NMR spectrum is dependent on the presence of reducing end N-acetylglucosamine. Finally, since the formation of these structures results from oxidation conditions, we anticipate that other oxidation conditions, beyond potassium permanganate, could also potentially result in the formation of such structures.
[0038] In conclusion, it was found that oxidation conditions result in the conversion of N-acetylglucosamine residues at the reducing end of heparin chains to an N-acetylglucosaminic acid which yields a characteristic signal at 2.10 ppm in the 1H-NMR spectrum of the heparin. Therefore, this signal does not arise from an impurity or contaminant present within heparin, but rather represents a part of the heparin chain itself.
[0039] Modifications and variations of the methods in accordance with the invention are possible within the scope of the appended claims.

1. A method of identifying if a process including oxidation or oxidation followed by treatment with an acid was used to make a heparin sample, comprising:

wherein the structural signature is one or more of: 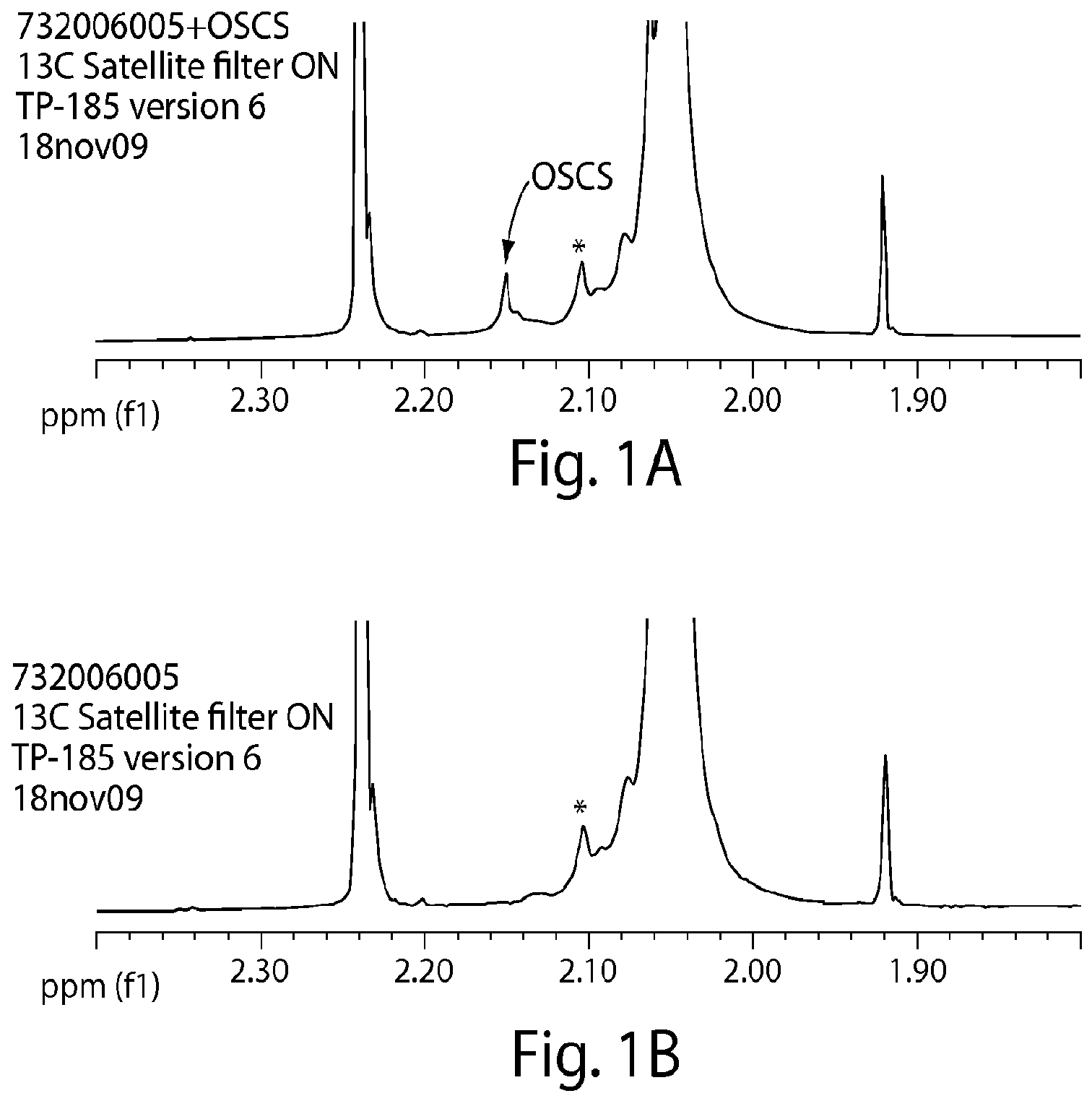 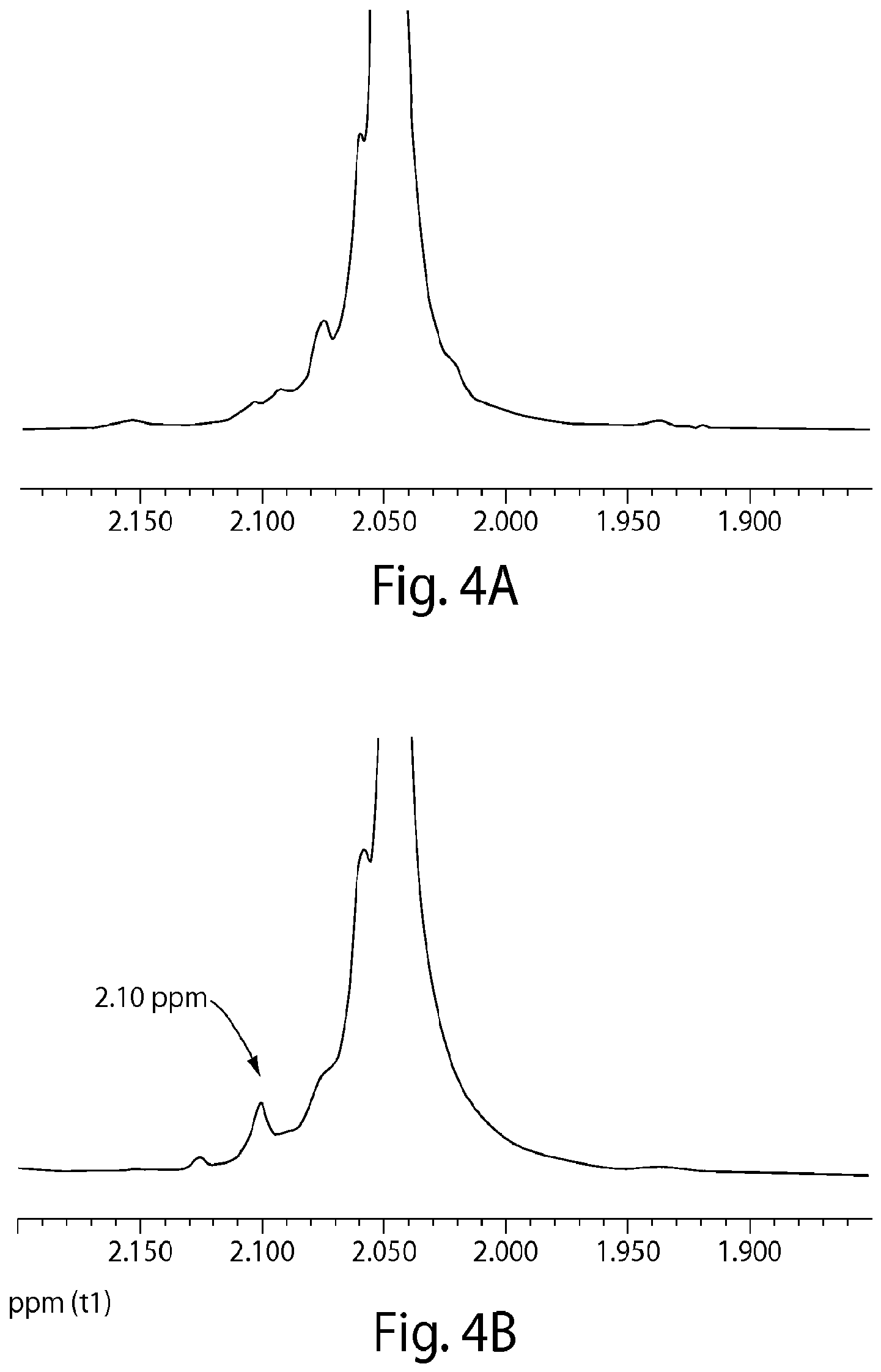 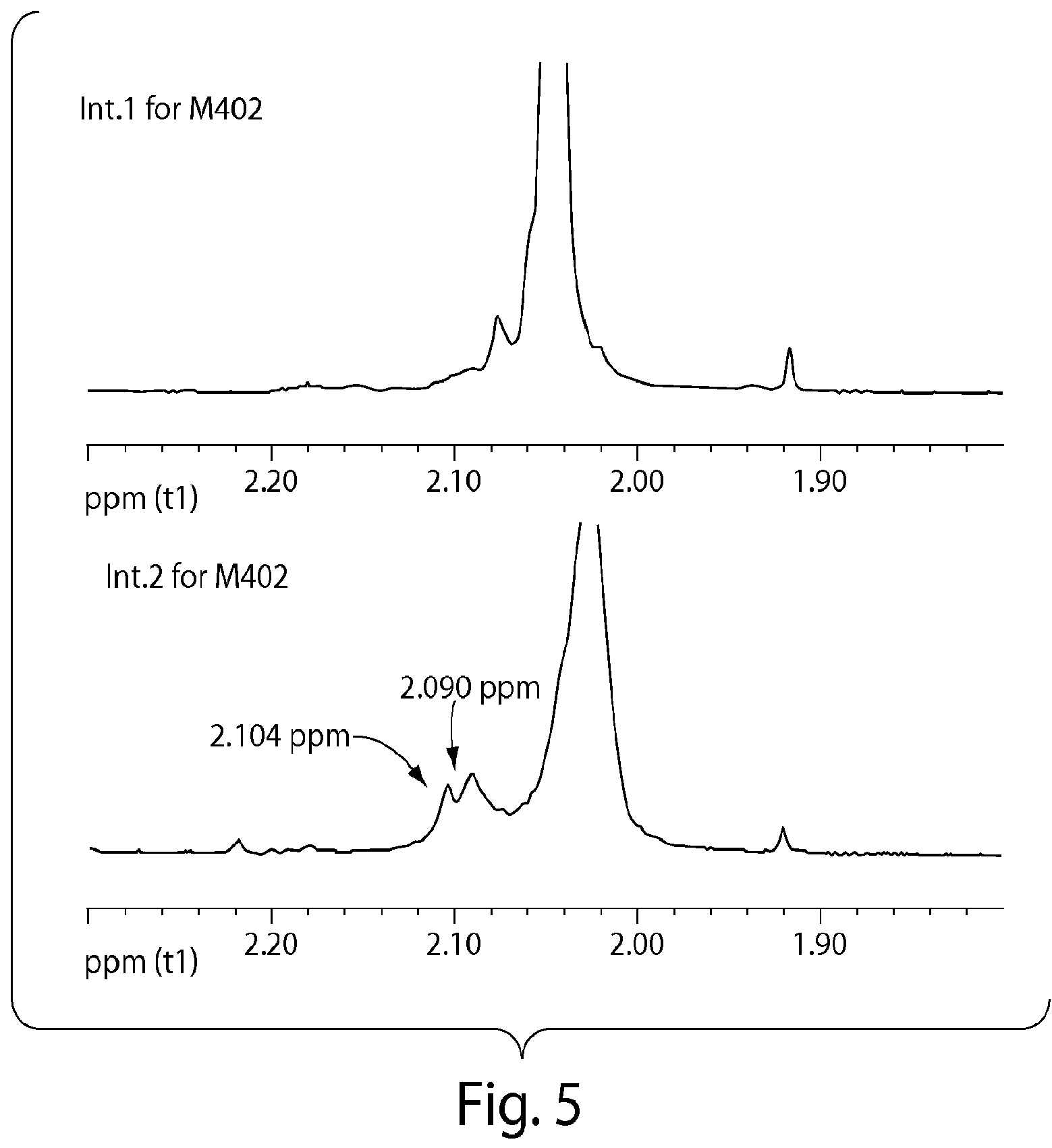 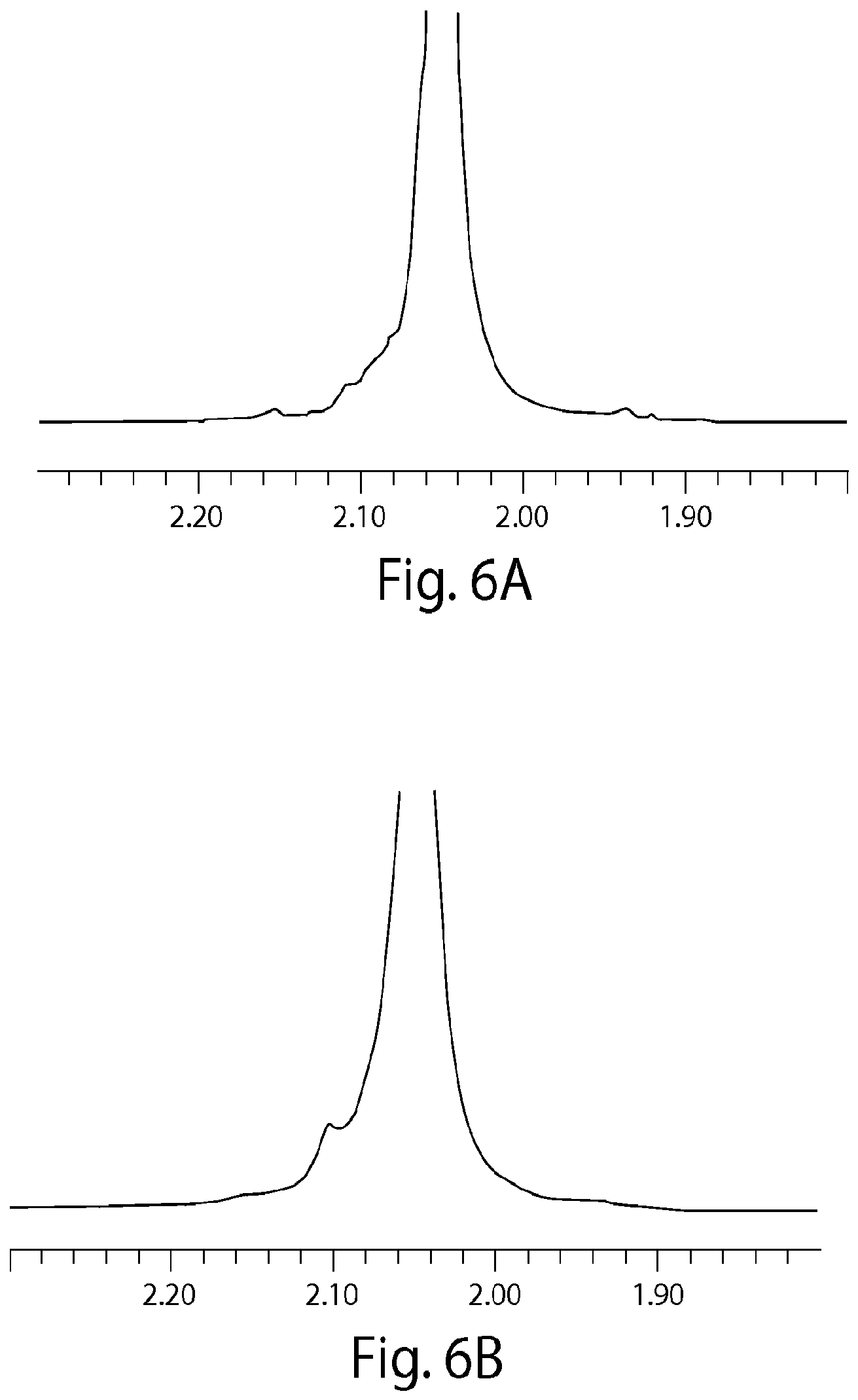 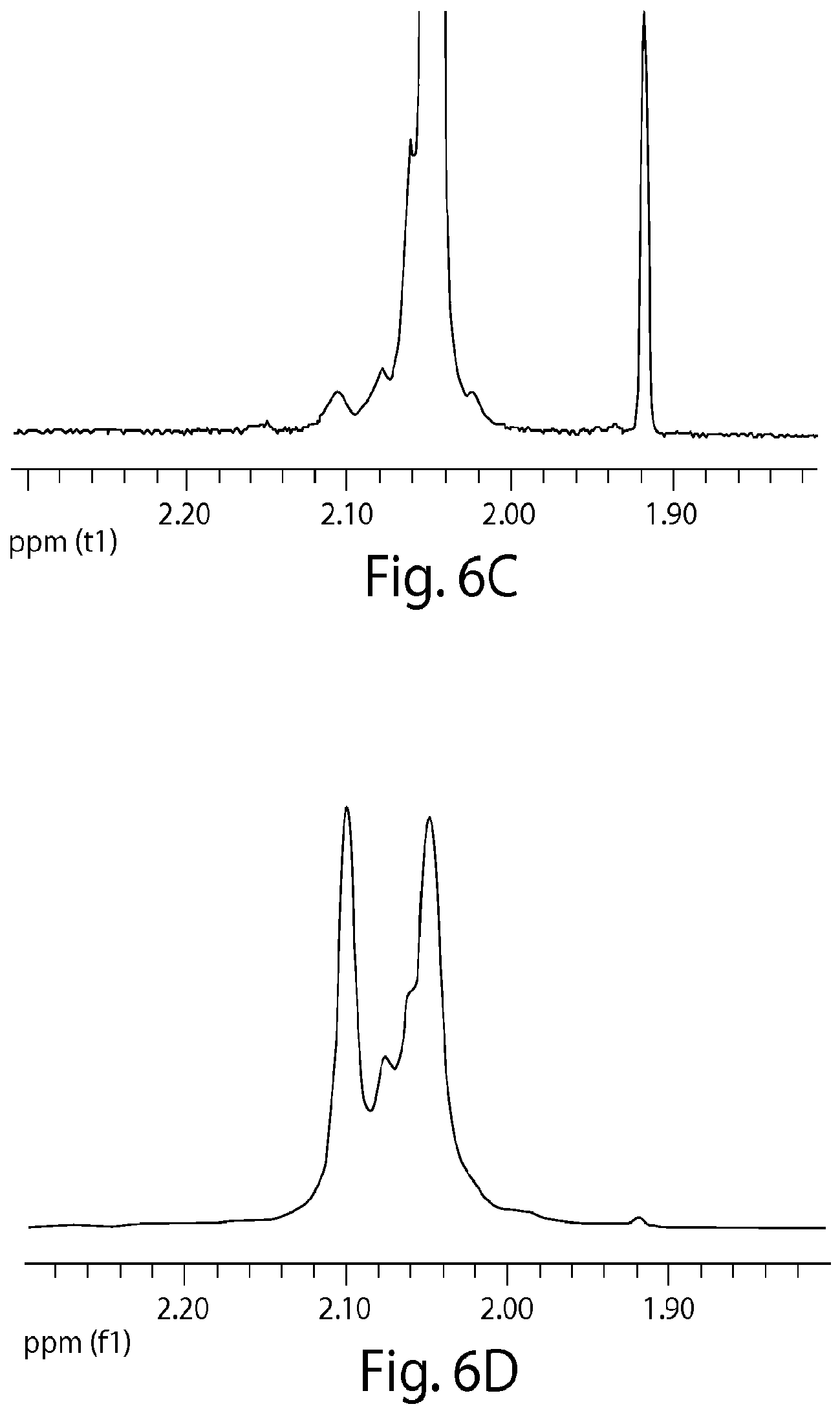 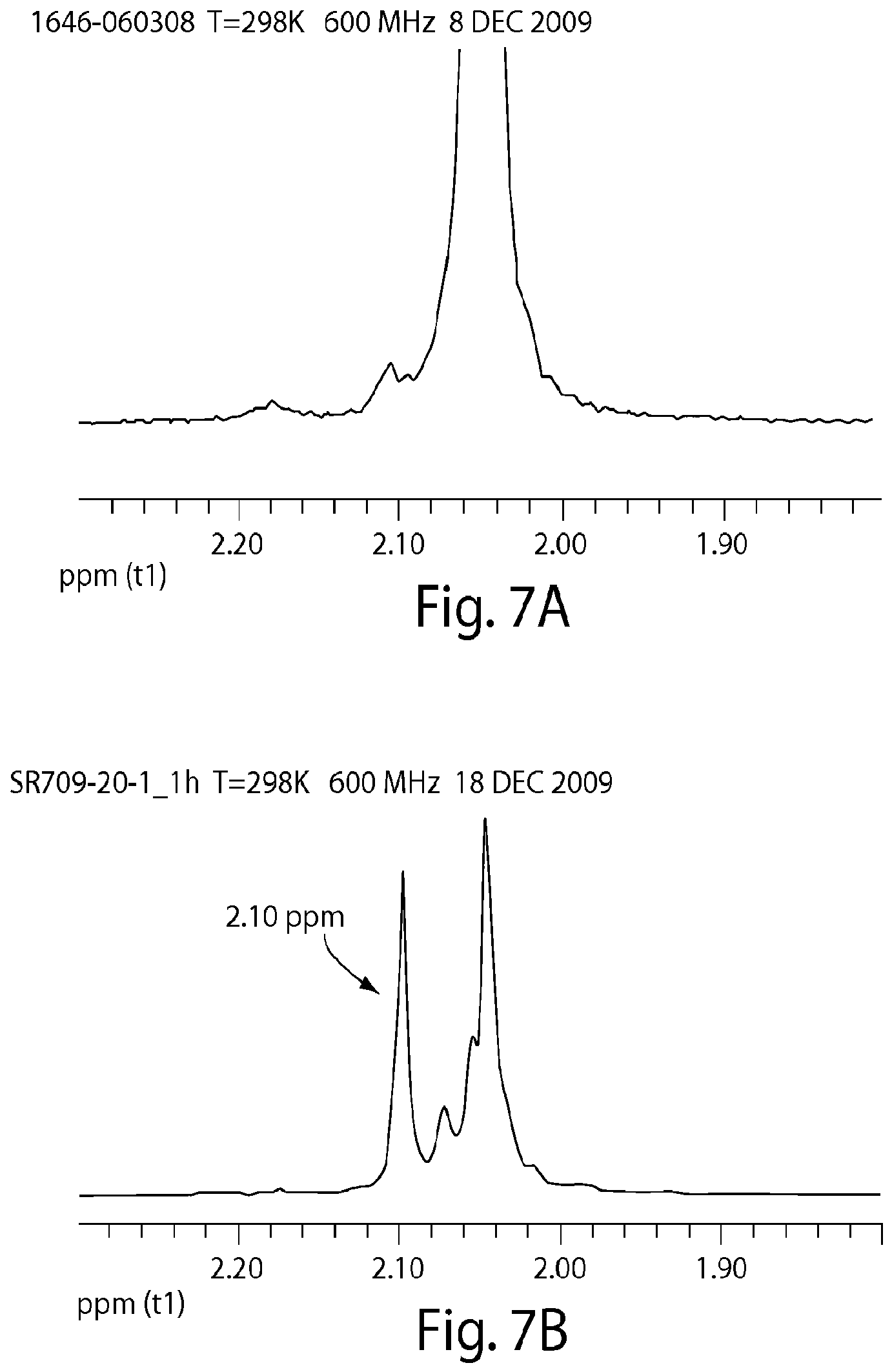 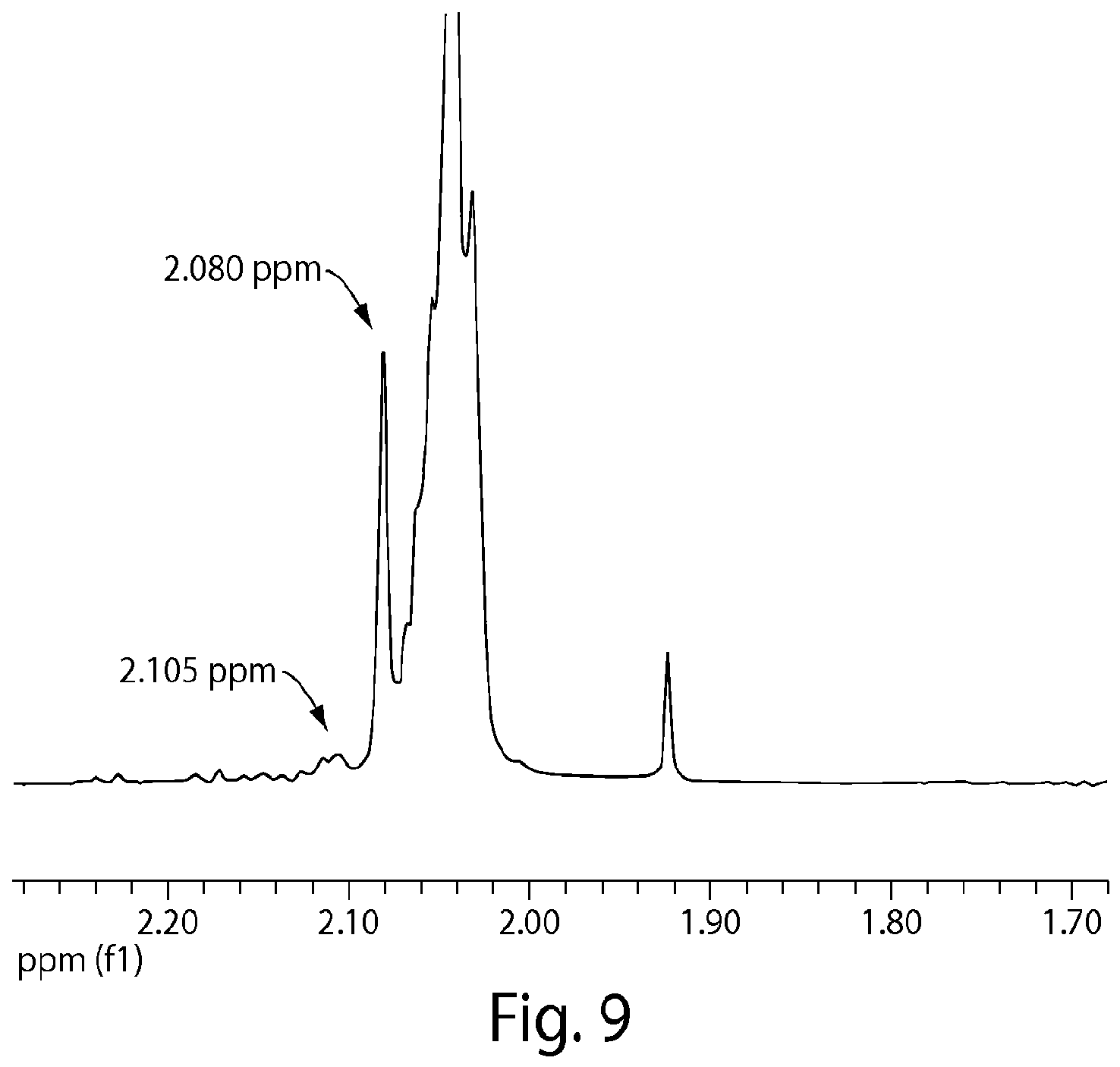 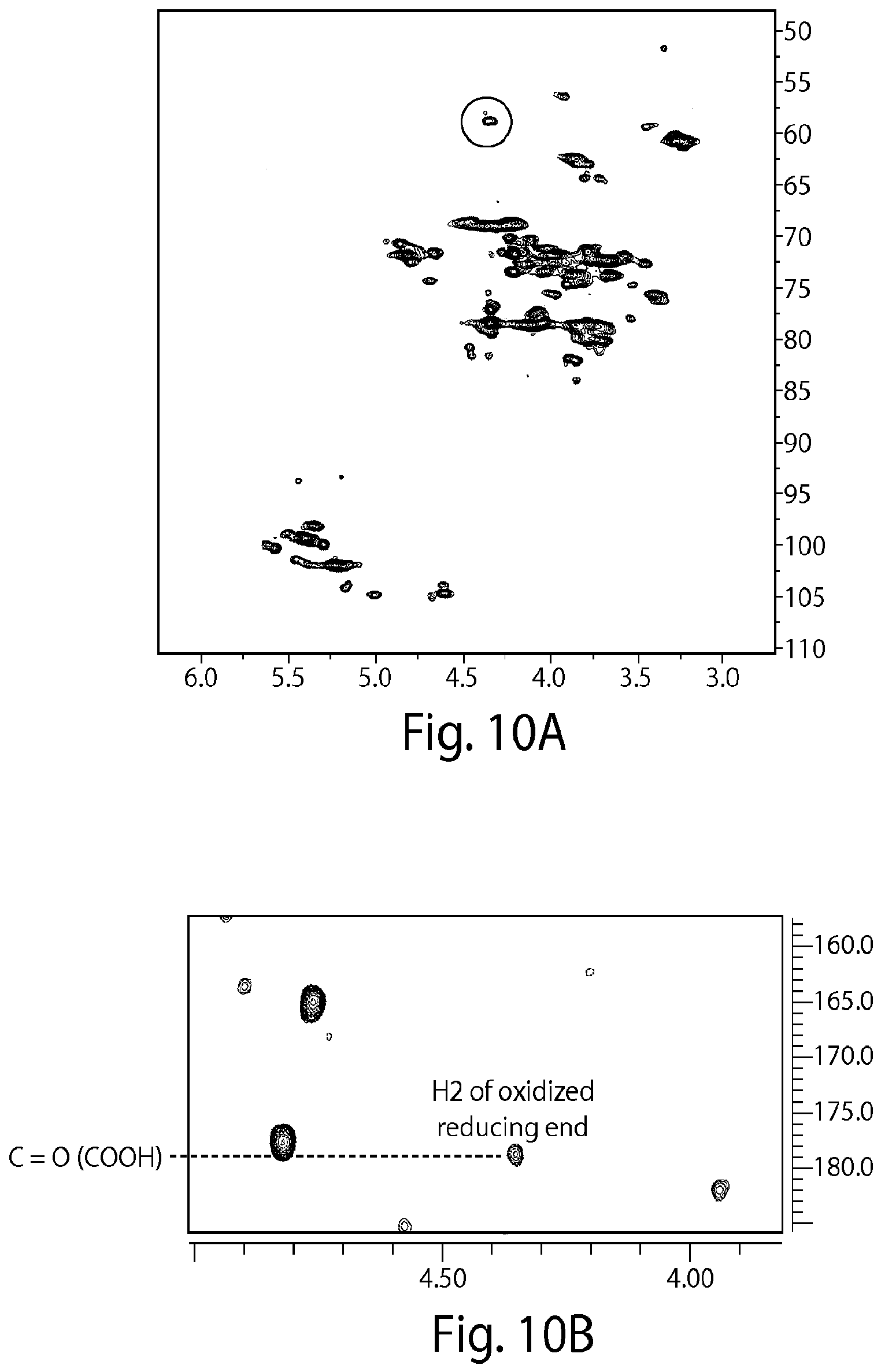 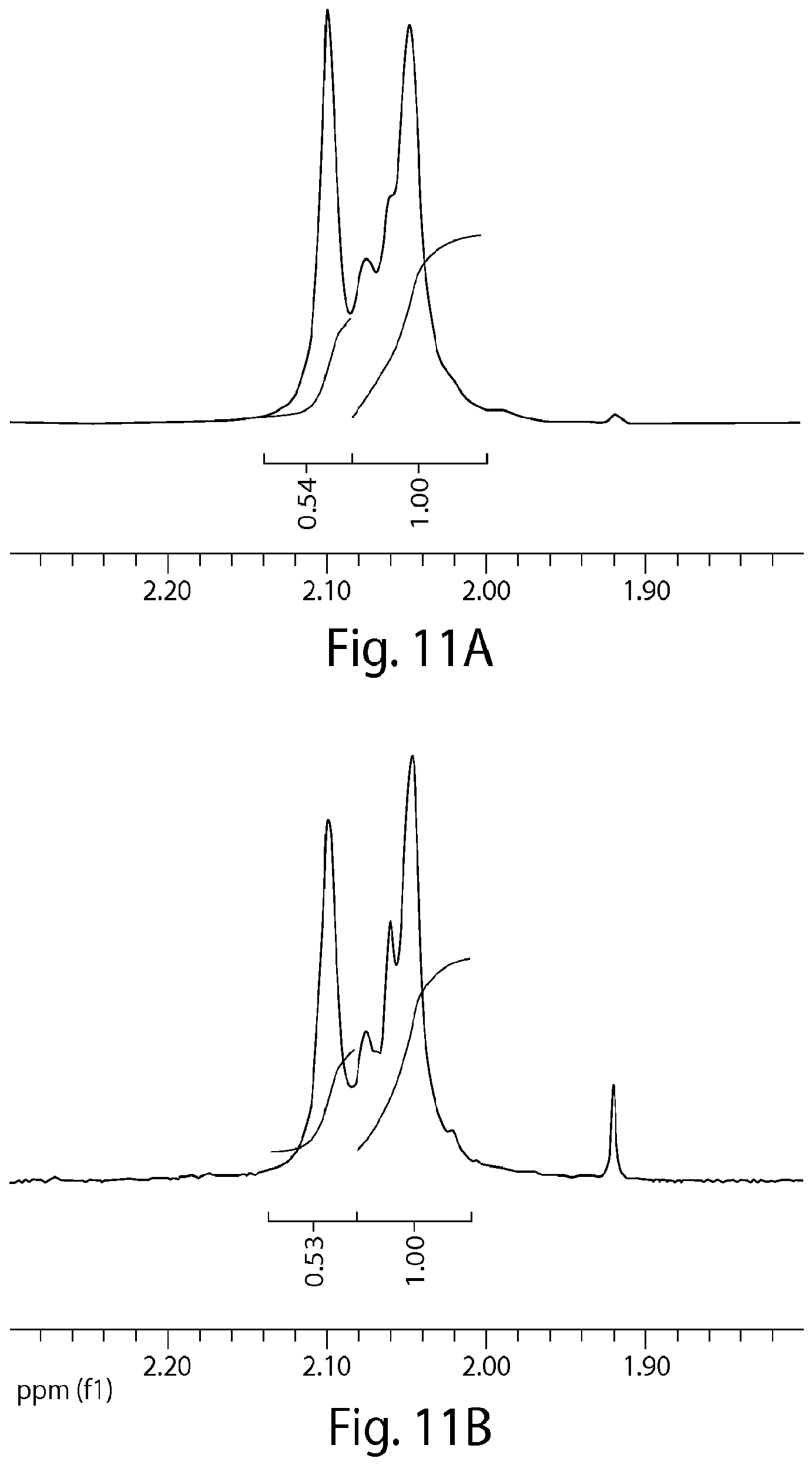 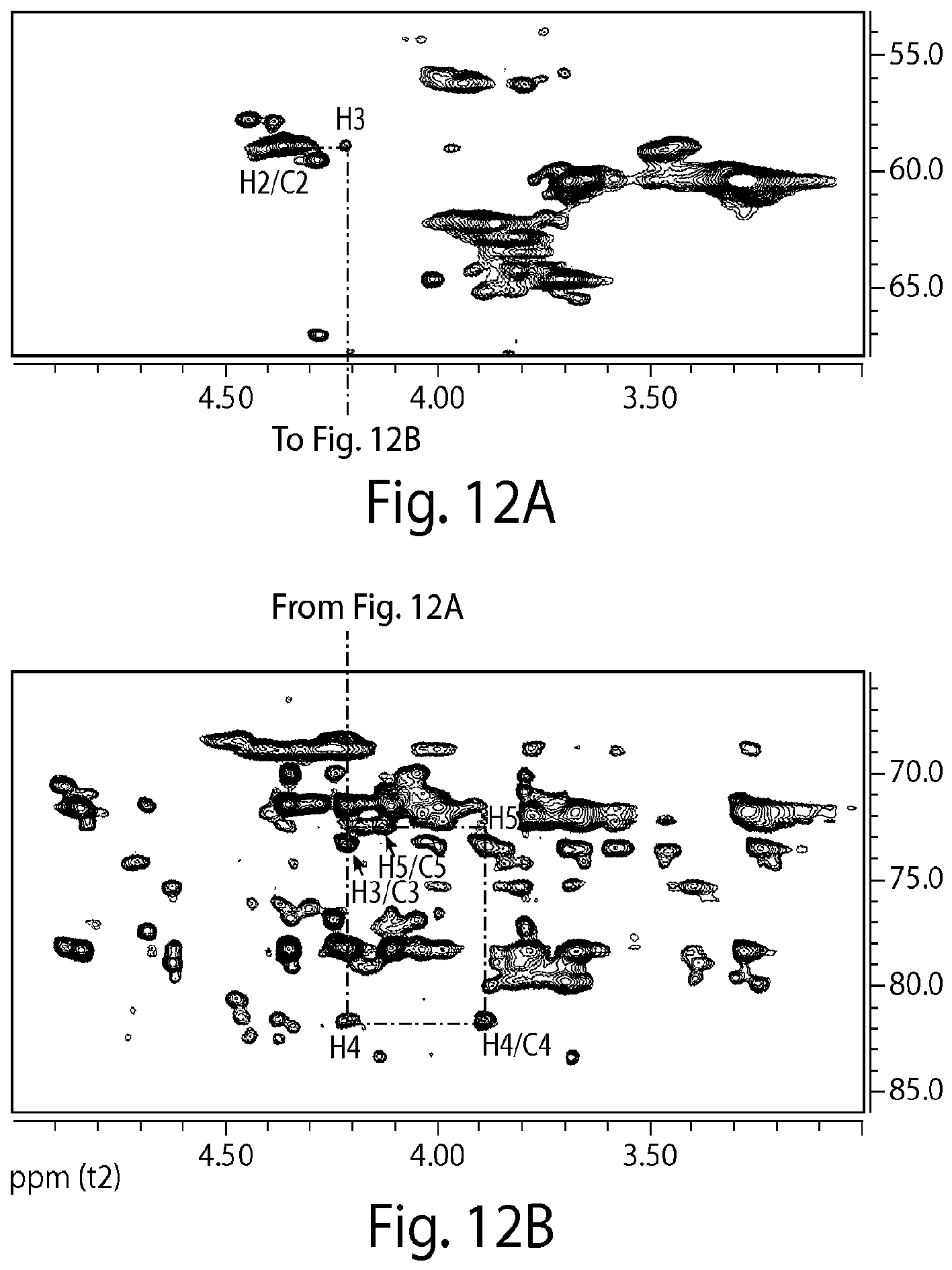 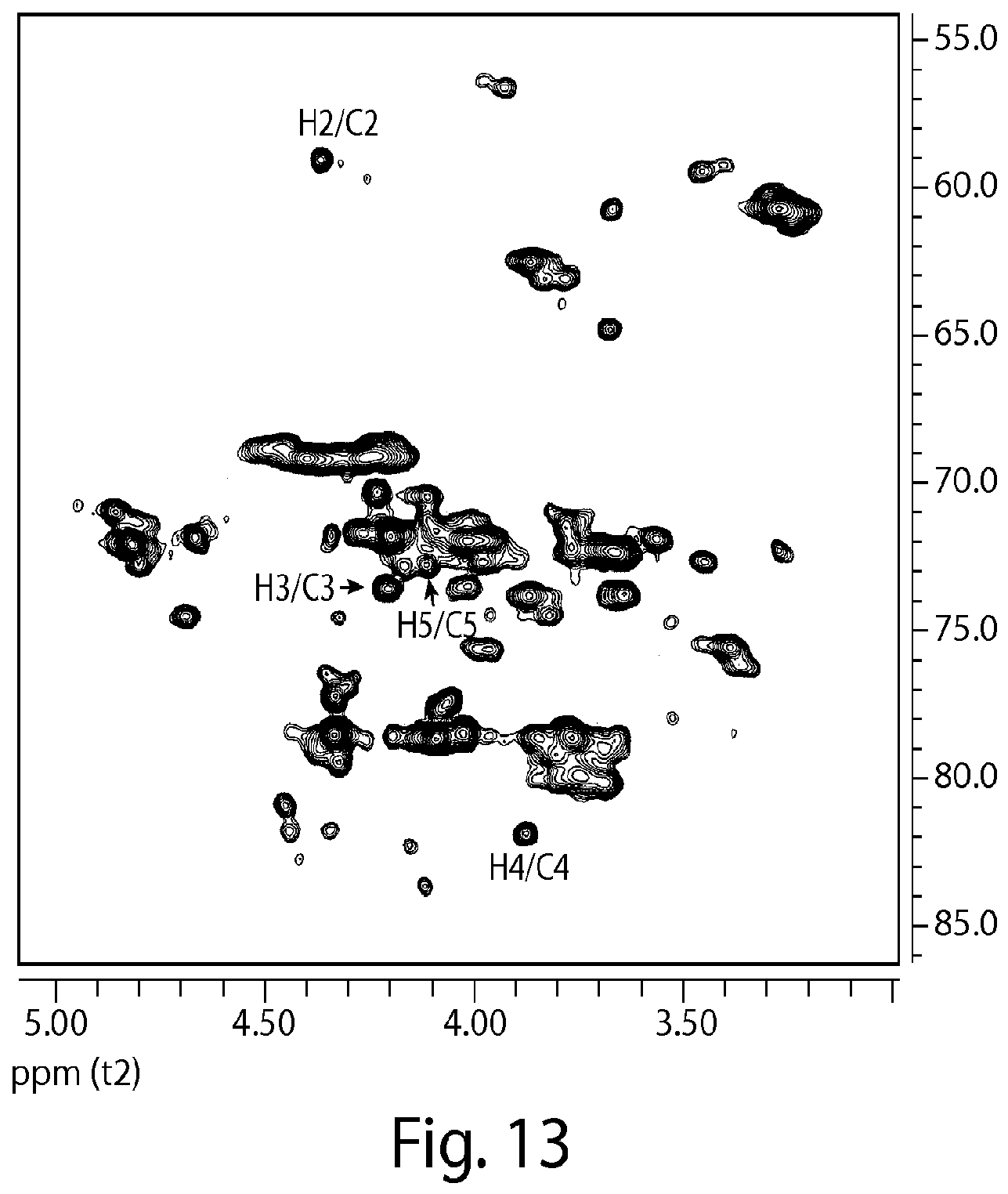 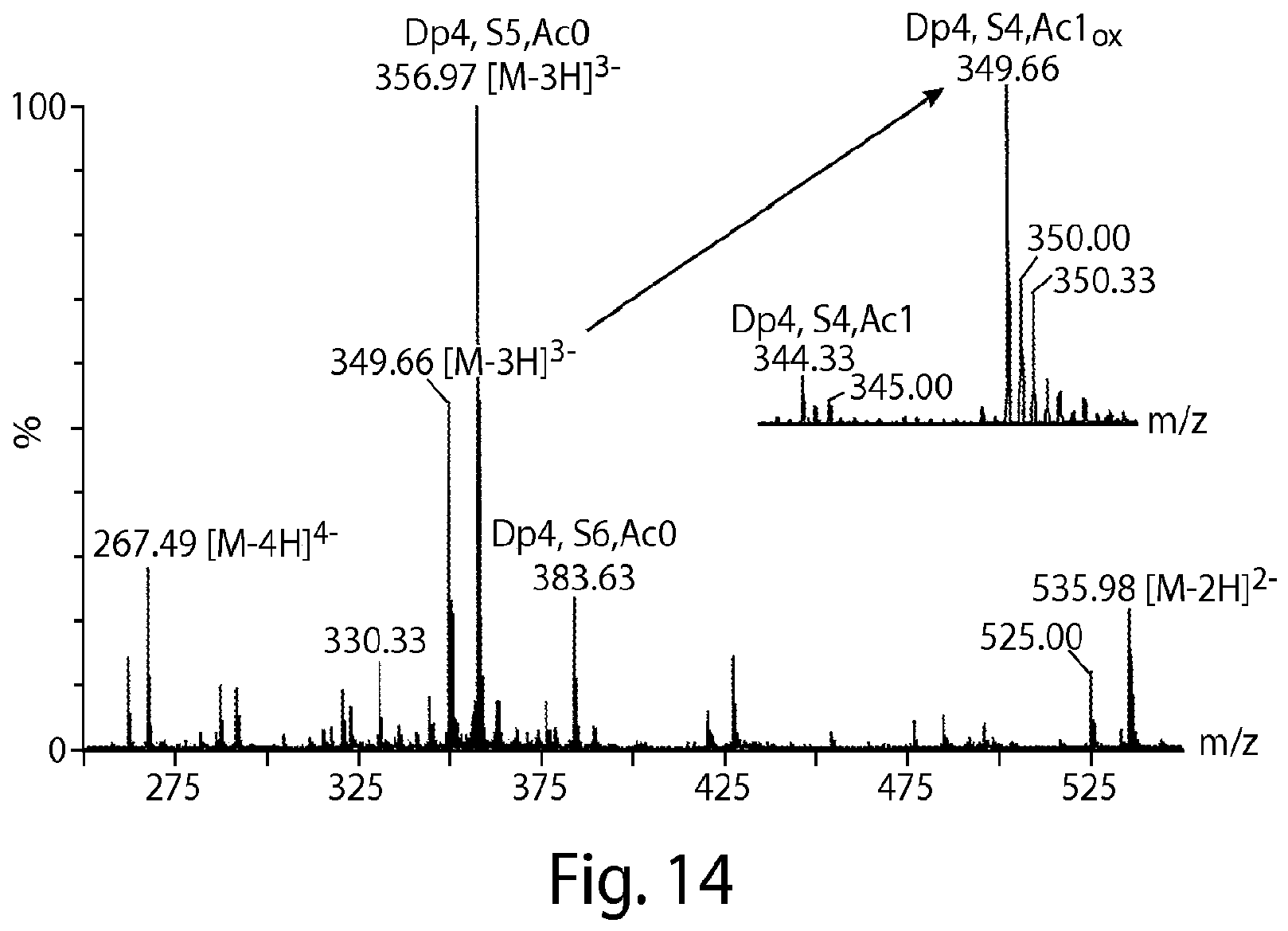 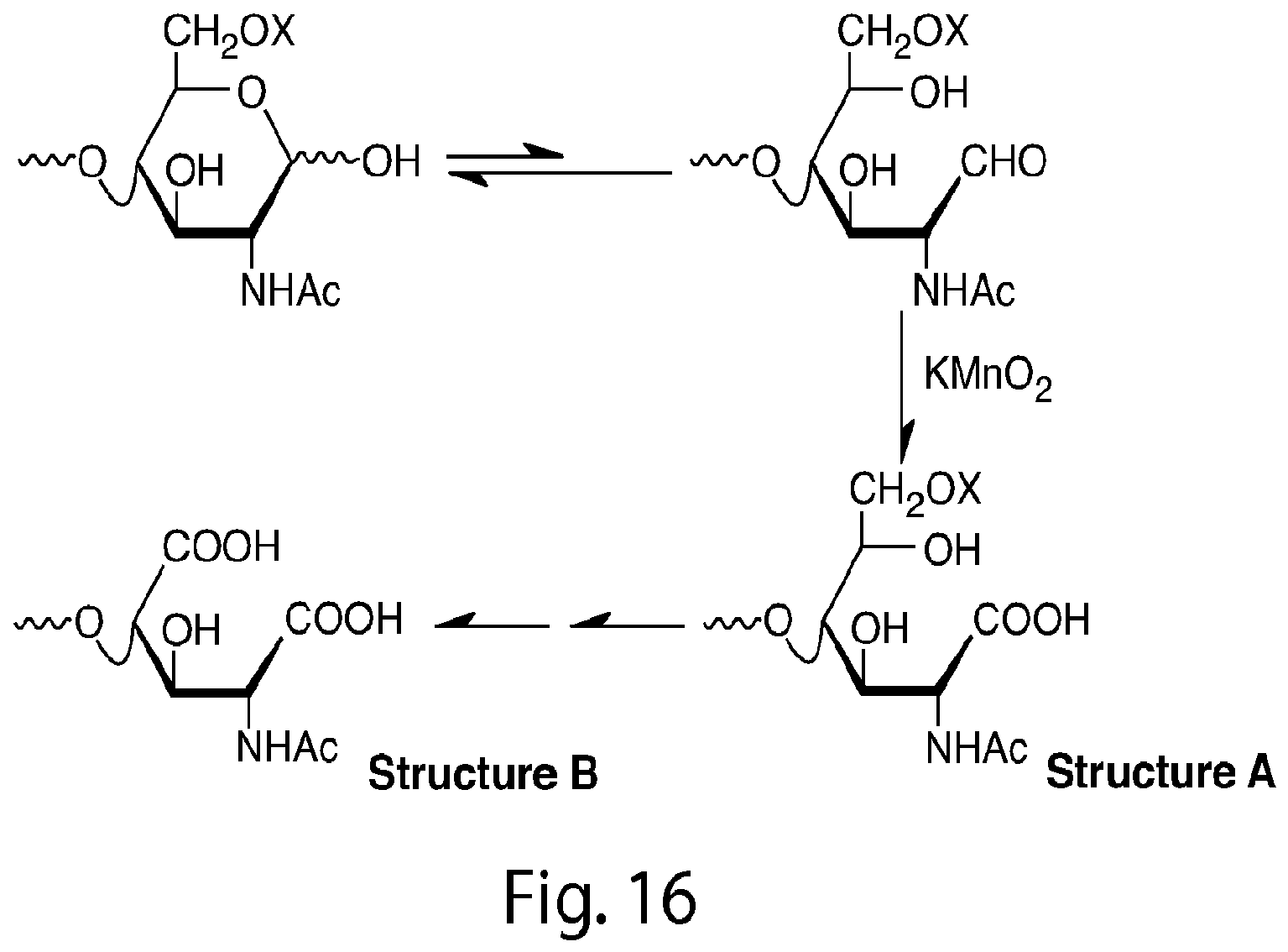