[0003] In previous satellite receivers, a down-converted signal in the frequency band from 950 to 2150 MHz was sent from an outdoor antenna and converter to one or more receivers in a consumer's residence by means of a coaxial cable. This required some protection from outside interfering signals, but not of a high degree. Some systems also employed a "B band" from 250 to 750 MHz, but all of these signals received a great deal of amplification in the outdoor unit such that ingress into the coaxial cable and/or receiver was controlled to a satisfactory level by normal suppression and shielding techniques.
[0004] A need now exists for a new satellite receiver employing a special communication channel having unique and very good suppression capabilities of undesired RF energies for high volume applications. Previous satellite receivers do not have a secondary communications channel and therefore, do not require the higher degree of suppression.
[0005] EP 1 740 028 A1 describes a printed circuit board with RF connector. The connector is mounted to the printed circuit board on a top layer. A signal wire is inserted in a hole in the printed circuit board.
[0006] A shield is mounted on the bottom layer of the printed circuit board and an compasses the ending of the signal wire.
[0007] JP 11231974 A concerns a tuner board for computer. The tuner board comprises a printed circuit board and two connectors with terminals. The terminals are electrically connected to printed wiring formed on the surface of the printed boards.
[0008] Document US 2006/041919 A1 discloses a cable modem module device, cable modem device, and broadcast receiving device comprising a circuit board that packages an analog signal processing section and an digital signal processing section. The analog signal processing section comprises a circuit board on which, an RF coaxial connector is installed. The circuit board is housed in a shield case formed of an material which has an effect of shielding unwanted irradiation of an electromagnetic wave such as a metal, for example. The shield case is formed of: a frame shaped metal case which covers four faces at the periphery of the circuit board; a first cover which covers one opening of this tetrahedron shaped metal case; and a second cover which covers the other opening of the metal case.
[0009] Document US 6 407 932 B1 discloses an electromagnetic interference shield and ground cage, used within fiber optic data communications transceivers for example, and, in particular, to an electromagnetic interference shield that significantly improves the electromagnetic interference (EMI) susceptibility of an optical receiver, for example, and which also serves as a low impedance ground cage for the optical transceiver. The electromagnetic interference shield and ground cage 10 has a top wall, the two side walls, and a back wall having a rectangular configuration and a front wall having a semi-circular shape. The respective edge of the top wall is connected to each of the other walls to form an enclosure having a parallelepiped-configuration, i.e., a box-shape.

[0010] According to the invention an assembly according to claim 1 is provided.
[0011] These and other aspects, features and advantages of the present principles will become apparent from the following detailed description of exemplary embodiments, which is to be read in connection with the accompanying drawings.

[0012] The present principles may be better understood in accordance with the following exemplary figures, in which:

FIG. 1 is a plan view of a printed circuit board (PCB) having an F-connector to which the present invention can be applied;

FIG. 2 is a plan view of the RF interference suppressor according to an embodiment of the invention;

FIG. 3 is a plan view of the underside of a PC board showing the center conductor connection of the F-connector;

FIG. 4 is an underside view of a PC board showing the RF interference suppressor installed according to an embodiment of the invention;

FIG. 5 is cross-sectional view of the RF interference suppressor installed on a PCB according to an embodiment of the invention;

FIG. 6 is a top view of a PC board showing an RF interference suppressor shield surrounding the RF circuitry according to an embodiment of the invention;

FIG. 7 is a top view of the PC board showing a cover added to the RF interference suppressor shield shown in Figure 5 according to an embodiment of the invention;

FIGS. 8A and 8B are top and bottom views, respectively, of an exemplary PC board having two F-connectors;

FIGS. 9A and 9B are top and bottom views, respectively, of a dual RF interference suppressor according to an embodiment of the invention; and

FIGS. 10A and 10B are top and bottom vies of the PC board showing the dual RF interference suppressor installed according to an embodiment of the invention.

three sides (23) extending transversely from the bottom 22),
and

a tab (24) extending upward from the bottom and having an aperture (25) configured to fit around a threaded portion of the at least one F-connector (12), characterized in that the tab (24) further comprises an offset (28) positioned at a base of the tab (24) and starting below the bottom edge of the PC board (10) such that said tab (24) is displaced relative to the bottom of the shield (20), the tab (24) being separated from the three sides (23).

2. The assembly of claim 1, further comprising positioning means integrated into the shield (20) and configured to secure a position of the shield (20) to the underside of the PC board (10) before soldering.

4. The assembly of claim 1, wherein said three sides(23) are connected to each other.

5. The assembly of claim 1, wherein each of said three sides (23) further comprises a solder tab (26) extending there from and configured to be soldered to the PC board (10).

6. The assembly of claim 1, wherein said tab (24) is configured to be positioned between a shoulder of the F-connector (12) and the metal case (40) of the satellite receiver.

8. The assembly of claim 1, wherein the satellite receiver has more than one F-connector (12) connected to the printed circuit board (10) and extending out of the metal case (40).

9. The assembly of claim 8, wherein the tab has more than one aperture (25) each configured to fit around the threaded portion of each one of the more than one F-connectors (12). 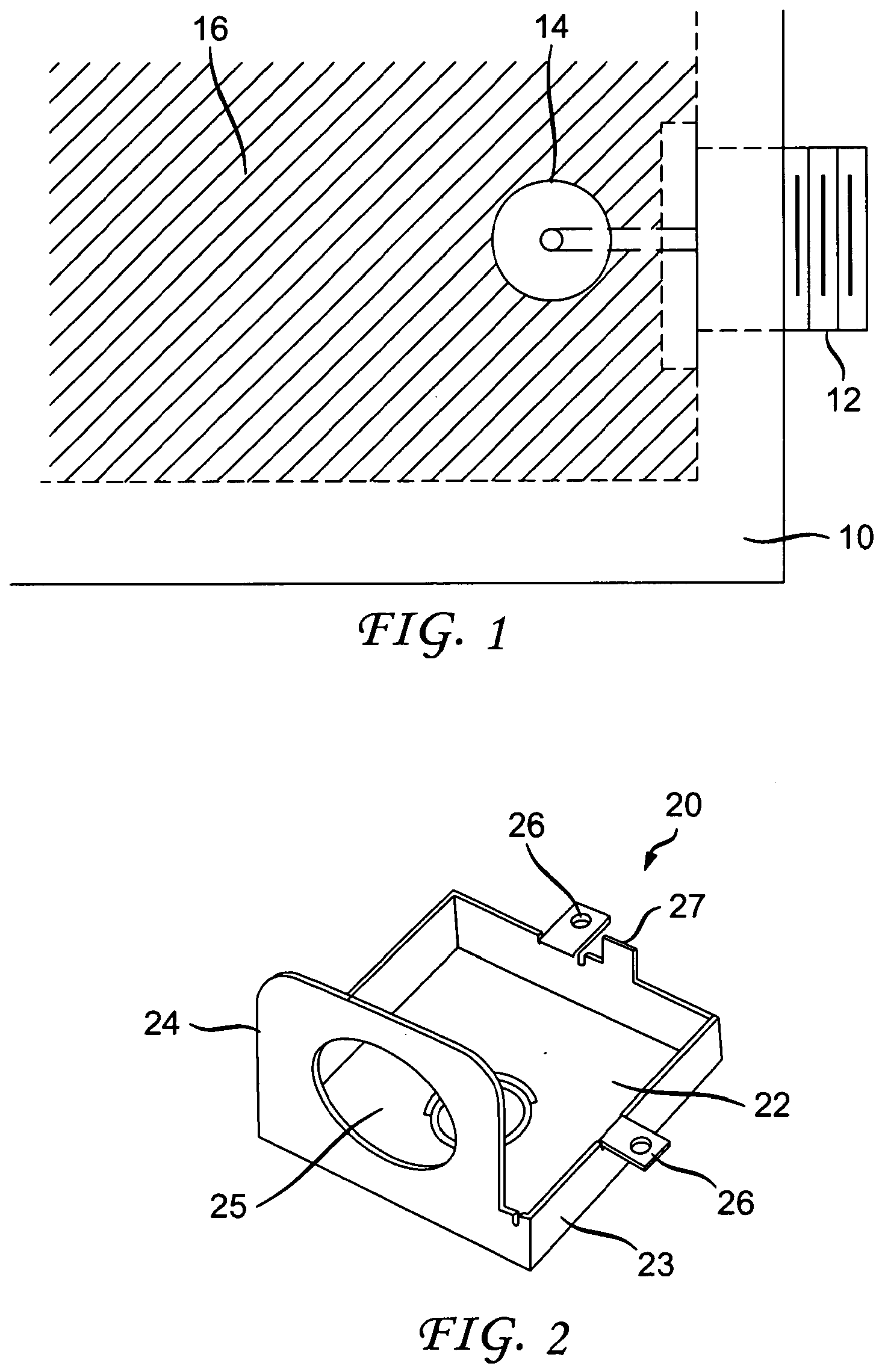 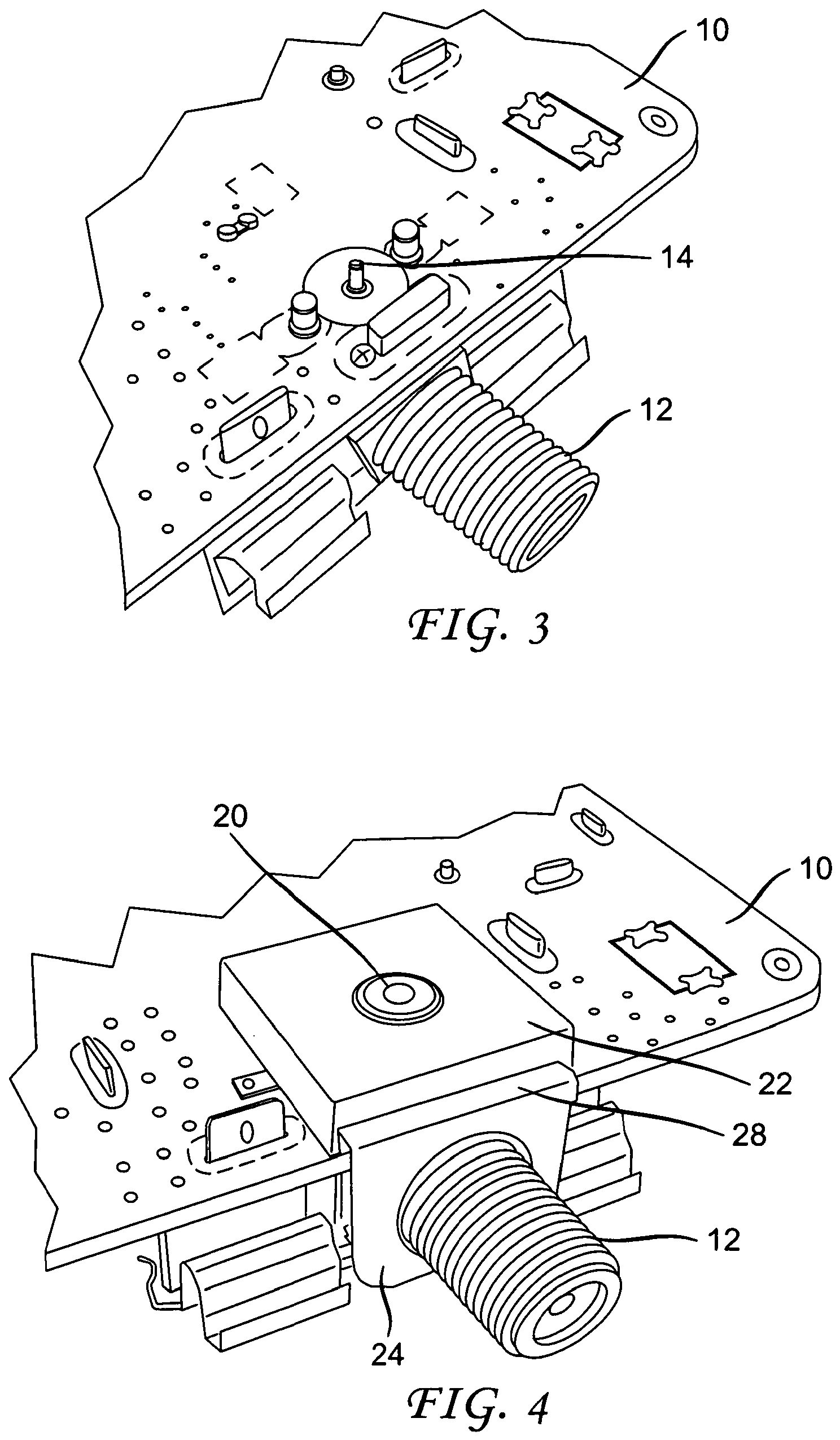 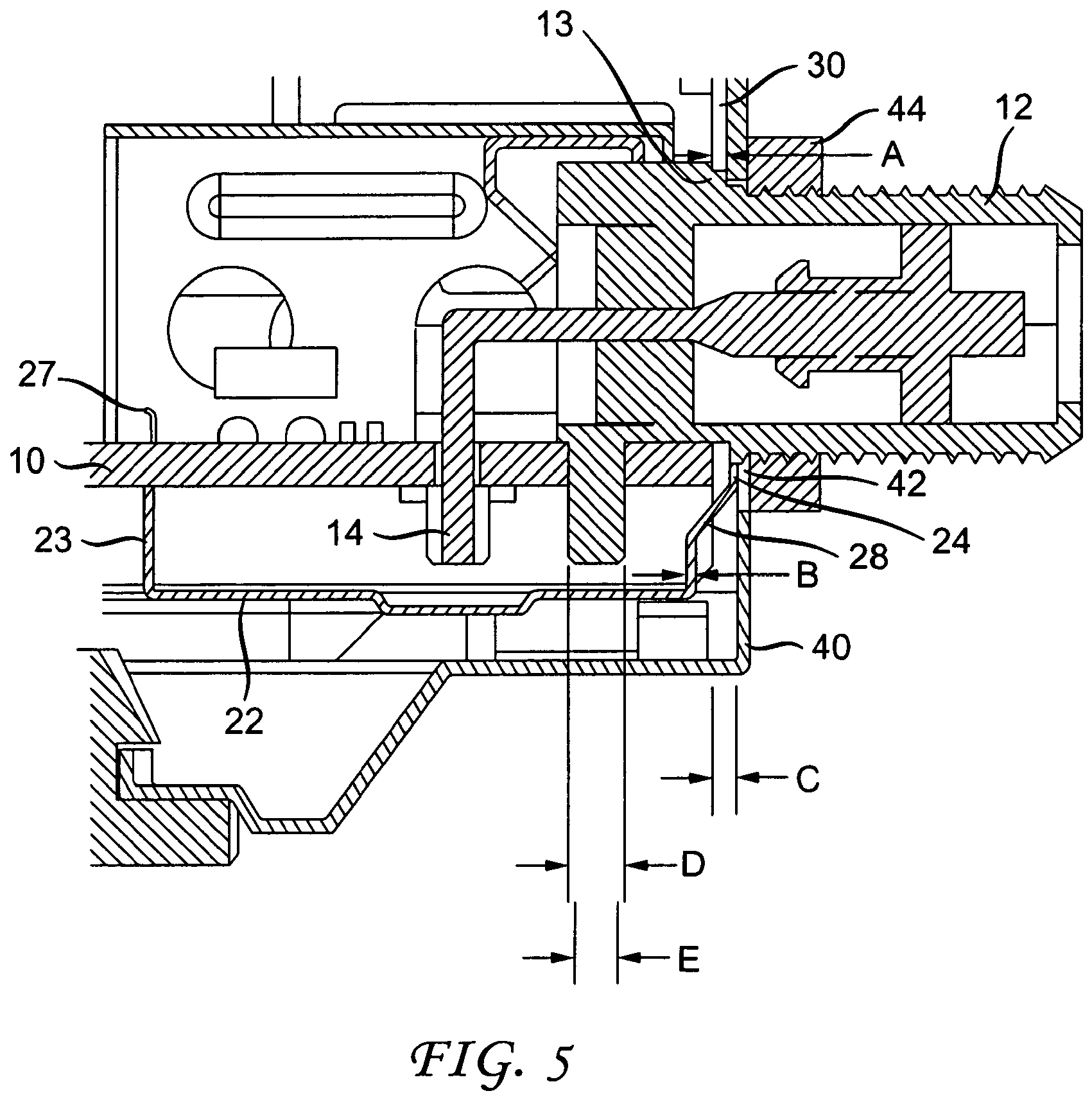 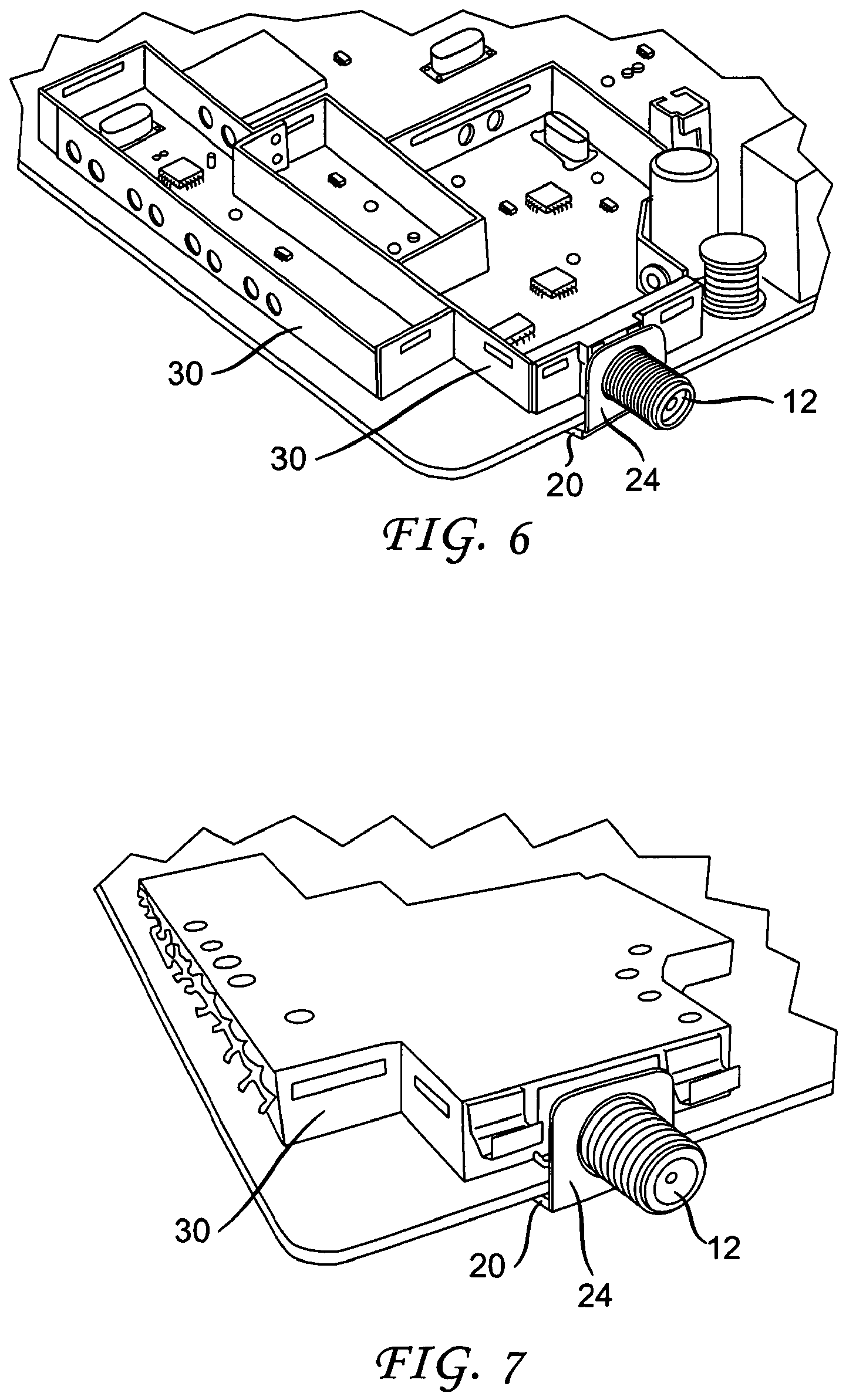 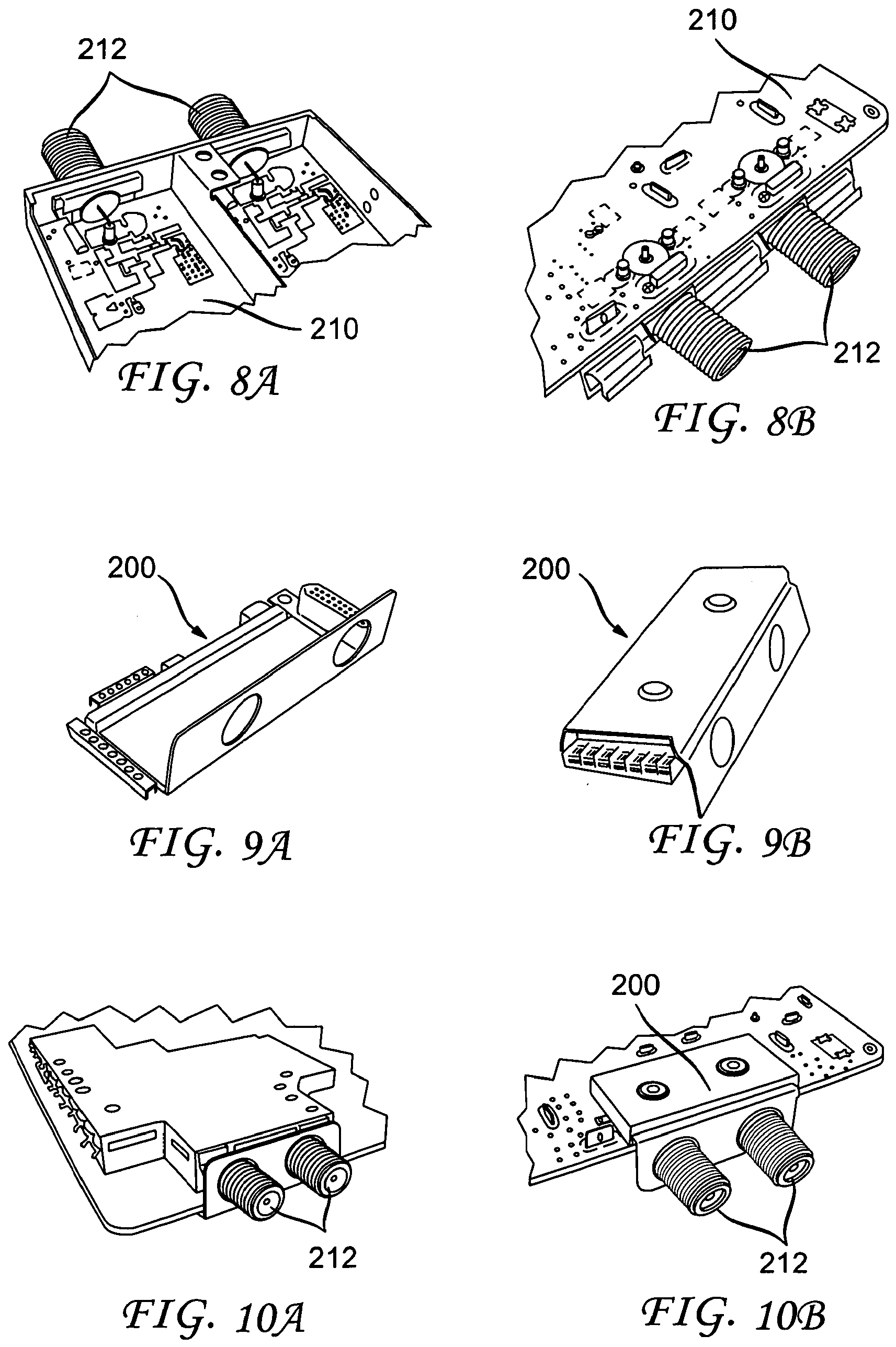