[0001] The invention relates to the delivery of biopharmaceutical and other therapeutic agents parenterally to a mammal via a minimally invasive, low pain administration. The agents are delivered to the patient via, e.g., the epidermal, dermal, or subcutaneous layer of the skin.

Fig. 1 is a cross-sectional view of an injection device in accordance with the present invention.

Fig. 2. is an outer side view of the injection device of figure 1.

Figs. 3a-3c are a cross-sectional view of the spring mechanism lay out of an injection device in accordance with the present invention.

Figs. 4a-4c are depictions of the outer housing and safety sleeve of an injection device in accordance with the present invention.

Figs. 5a-5b are a side view of an injection device in accordance with the present invention depicting the skin/device interaction.

Fig. 5c is a cross-sectional view of the device as depicted in figure 5b.

Figs. 6a-6b depict a different embodiment of an injection device using a gas-powered auto injector in accordance with the present invention.

Figs. 7a-7c depict another embodiment of an injection device, a low- profile gas auto injector, in accordance with the present invention.

Figs. 8a-8f are cross sectional views of an injection device and drug formulation filling system in accordance with the present invention.

[0050] The formulations and devices of the invention relate in certain preferred embodiments to the administration of a therapeutic agent into the epidermal, dermal or subcutaneous layer of an animal.
[0051] There are at least three common causes of pain associated with needle/syringe injections which are the addressed by the invention. These causes of pain vary as a result from the following variables: (i) the volume of liquid delivered to the patient in a typical liquid administration; (ii) the size (diameter, thickness) of the needle; and (iii) the depth of the injection. Low-pain or pain-free administration is accomplished by addressing each of these variables.
[0052] There are at least four alternative elements to this invention that produce the effect of a pain-free administration of a therapeutic agent into the intracutaneous space of a patient resulting in systemic circulation of the agent or exposure of an antigen to the immune system in the case of vaccines. These elements are as follows: (i) a low volume injection; (ii) a concentrated therapeutic agent (e.g., drug) particle group or dispersed solid formulation surrounded by a protective solution (typically non-aqueous); (iii) a thin walled narrow-gauge needle; and (iv) a shallow injection of the concentrated dispersion of therapeutic agent (e.g., drug slurry) into the epidermal or dermal layer of the skin. Further, the current invention addresses the speed of injection and provides an auto-injector with a hidden needle.

[0139] A dry powder formulation of recombinant human growth hormone was prepared by lyophilizing a 5 mg/ml solution of hGH in 5 mM Tris buffer pH=7.6. Pastes of approximately 30% (w/w) solids were formulated by addition of approximately 230 mg of either N-methy-pyrollidone or an NMP/benzyl benzoate mixture to 100 mg of hGH/Tris to produce a 29% (w/w) hGH formulation. Dissolution of the formulation demonstrates that the NMP/BB mixture resulted in greater recovery of soluble hGH (50% versus 12%). The formulation was then filled into the lumen of a 25 gauge needle using a specially designed filling device such as the device shown in Fig. 8(d). Approximately 10 mg of recombinant human growth hormone containing formulation were included in the quantity of solid formulation included in the injection device. The filled system was then used to administer the solid formulation intracutaneously into a rat. The full dose was delivered to a shallow depth without noticeable irritation of the skin.

[0140] Another formulation would be formulating human glucagon for dry delivery via the delivery device described herein. The formulation for human glucagon takes place on two steps: First, lyophilized powder development. And second, biocompatible carrier development. Current injectable formulations of glucagon occurs as 1 mg of glucagon in 49 mg of lactose at pH less than 3.0. The formulation envisioned by the present invention provides an efficacious dose of glucagon in a minimal volume using as little stabilizer as possible to stabilize the glucagon during the freeze-drying process as well as during the shelf life. This is achieved by freeze-drying the glucagon at as high a concentration as possible. An example of such a formulation would be 1 mg of glucagon in 3 µl total volume.
[0141] All formulations are prepared as aqueous formulations at pH of about 3.0 or lower. Citric acid is used to adjust the pH, however, those of skill in the art would know of alternatives. Sucrose is added as a stablizer as it is preferred to the reducing sugar lactose. Examples of glucagon/stabilizer ratios would be glucagon:sucrose of 1 to 0.5, or 1 to 1. It is also possible to use glucagon:sucrose:tween in the ratio of 1 to 1 to 0.01. The fluid carrier is a biocompatible non-solvent of proper proportion chosen from, for example, benzyl benzoate, N-methylpyrrolidone, or glycerin.
[0142] The invention has been described in an illustrative manner, and it is to be understood that the particular embodiments depicted in the figures and the terminology which has been used has been intended in a nature of words of description rather then of limitation,

2. The formulation of claim 1, wherein said paste is a slurry.

3. The formulation of claim 1, wherein said therapeutic agent is a protein, peptide or polypeptide, and wherein said peptide is optionally glucagon.

4. The formulation of claim 1, wherein said therapeutic agent is subjected to lyophilization, spray-drying, freeze-drying, or spray-freeze drying prior to incorporation into said pharmaceutically acceptable carrier; and optionally wherein said therapeutic agent has a mean particle size ranging from 10 nanometers (0.01 microns) to about 100 microns, with no particles being larger than about 500 microns.

5. The formulation of claim 1, further comprising an effective amount of a stabilizing agent, optionally wherein said stabilizing agent is a member selected from the group consisting of surfactants, polyoxamers, polyols, gels, amphoteric compounds, and mixtures thereof.

8. The formulation of claim 1, wherein

(a) said formulation has a volume of about 1 microliter to about 250 microliters; or

9. The formulation of any one of claims 1 to 8 for use in a therapeutic method for administering the therapeutic agent to an animal, said method comprising injecting the formulation into the epidermal, dermal or subcutaneous layer of said animal.

10. The formulation for the use of claim 9, wherein:

(a) the mean particle size of therapeutic agent is sufficiently small and uniform to be syringeable; or

11. The formulation for the use of claim 10(b), wherein said biasing device incorporates a plunger forcing substantially all of said formulation out of said needle upon activation, optionally wherein:

(i) said needle is retracted after said biasing device forces substantially all of said formulation out of said needle; or

12. The formulation for the use of claim 10(b), wherein said needle of said injection device comprises an expandable tip that expands to allow said formulation to flow out of said needle when said biasing device is activated.

13. A device for the administration of a therapeutic agent to an animal, comprising:

said needle and said biasing device being contained within a housing (20, 30, 40, 50, 60, 70), said housing including an activator (22, 42, 51, 61, 79), such that when said injection device is set against the skin of said animal, said activator can be activated to release said biasing device, thereby causing said needle to penetrate the skin of said animal and forcing substantially all of said unit dose of said formulation out of the tip located at the lower end of said needle.

(c) the tip of said needle is crimped into a flat orientation to create a peak by which to puncture the skin of said animal;

(d) multiple needle systems are contained within said housing, such that multiple penetrations are made to the skin upon activation, simultaneously administering a larger dose of said therapeutic agent;

(k) said device further comprises a dose controller (21, 43, 52) arranged on said housing which can be adjusted to change the displacement of said plunger, thereby controlling the amount of said unit dose of said formulation forced through said needle tip and thereby changing the dose administered to a patient upon activation of said biasing device.

(i) the device achieves substantially 100% displacement of said unit dose of said formulation out of said injection needle upon activation; 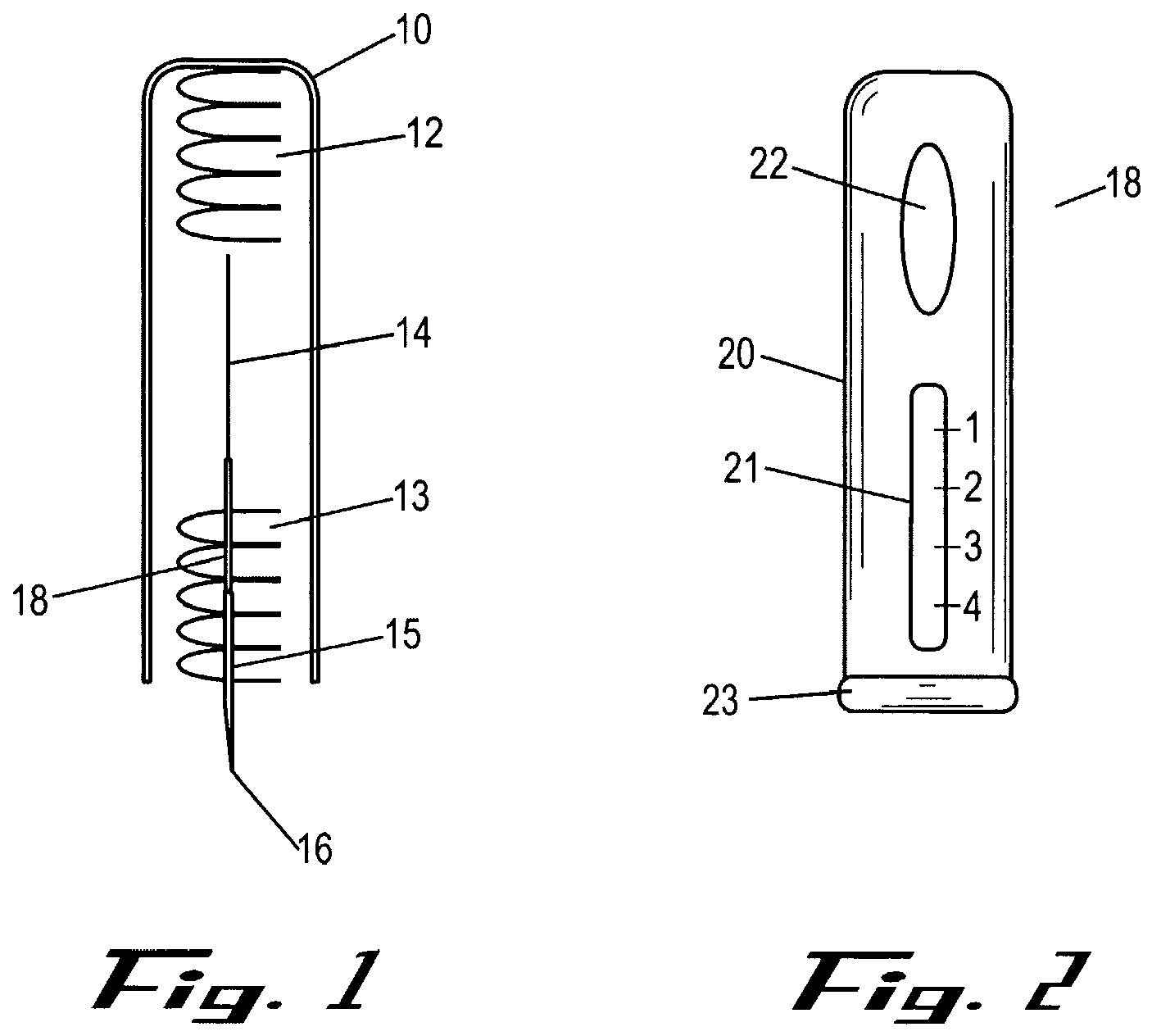 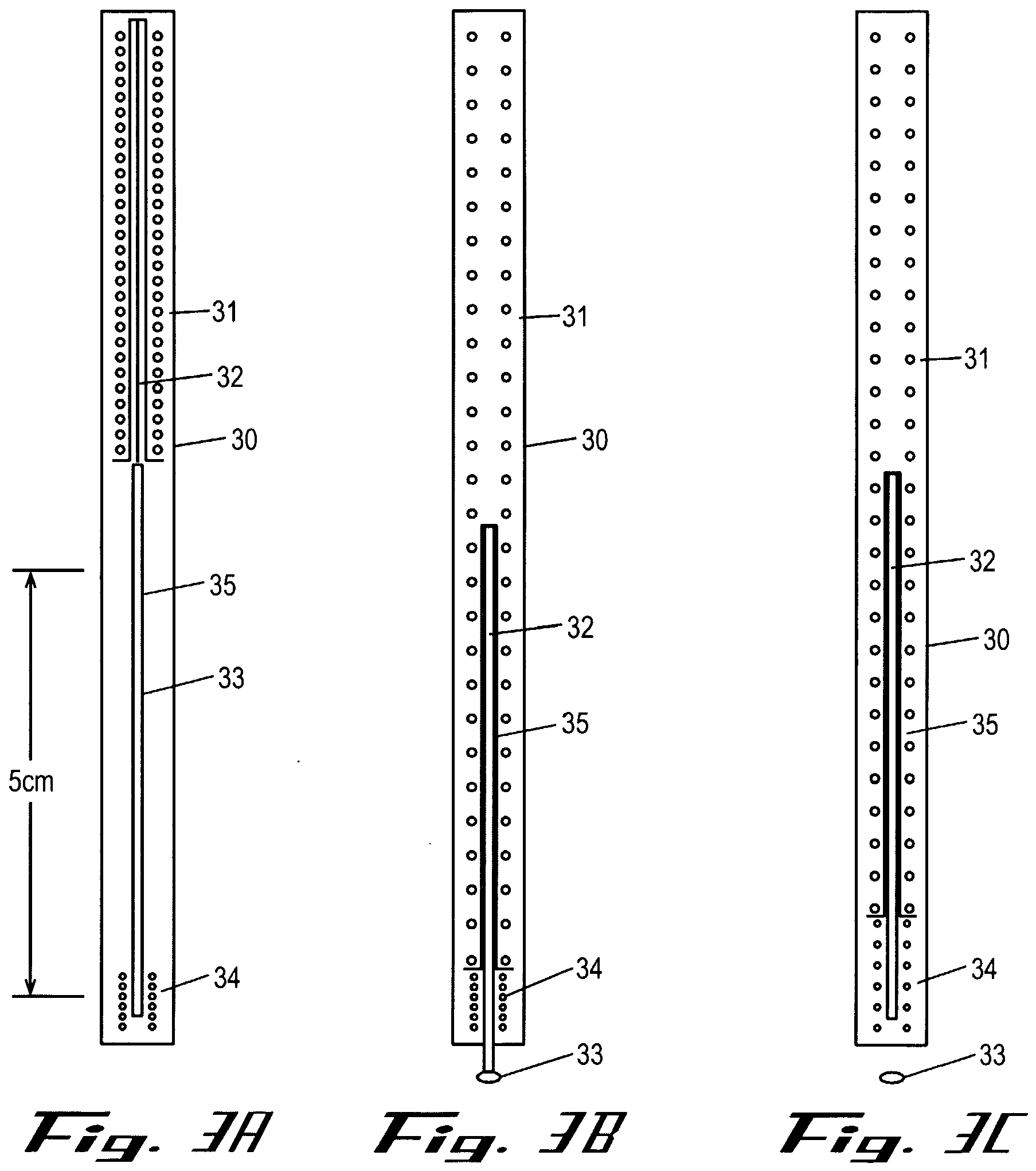 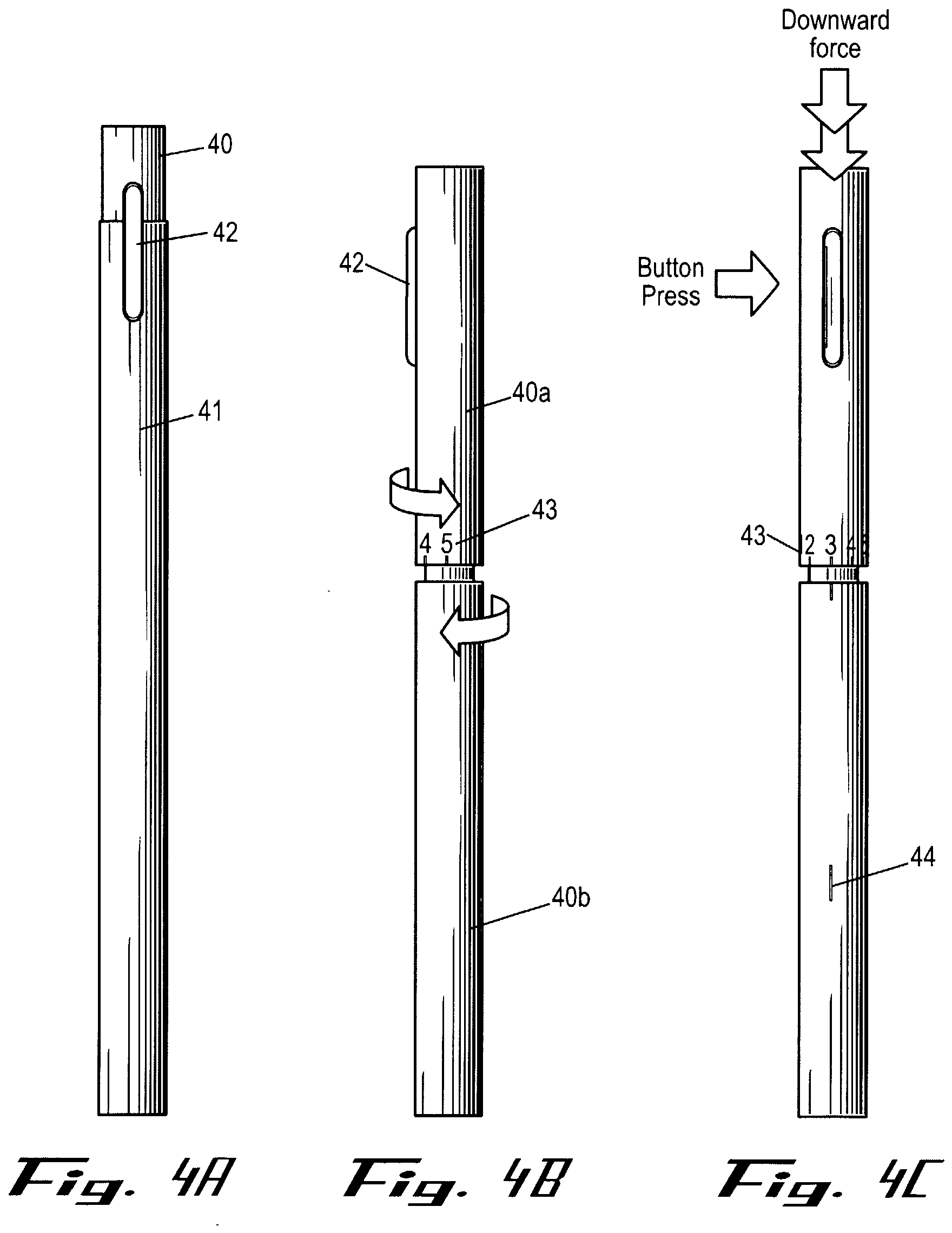 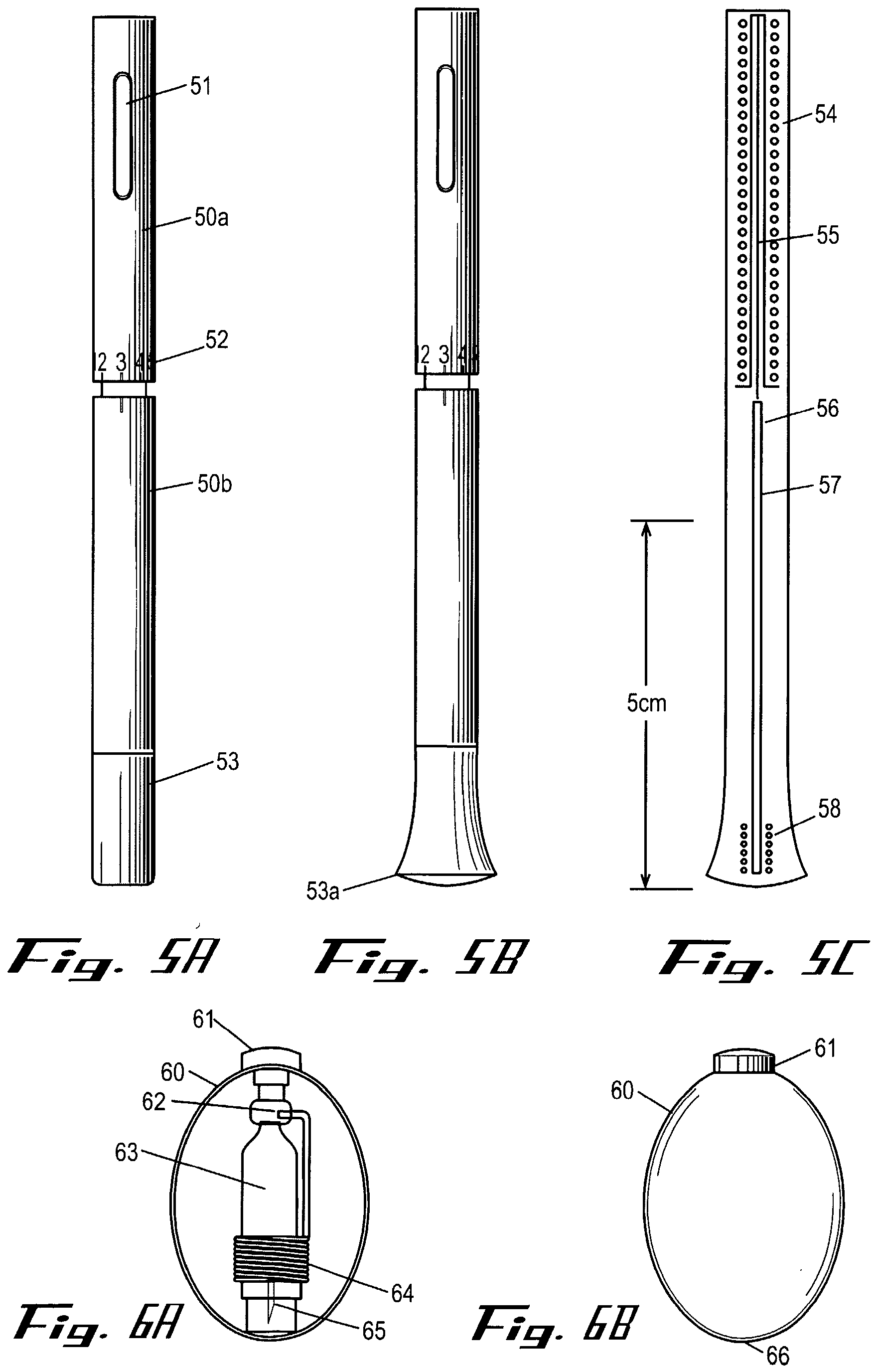 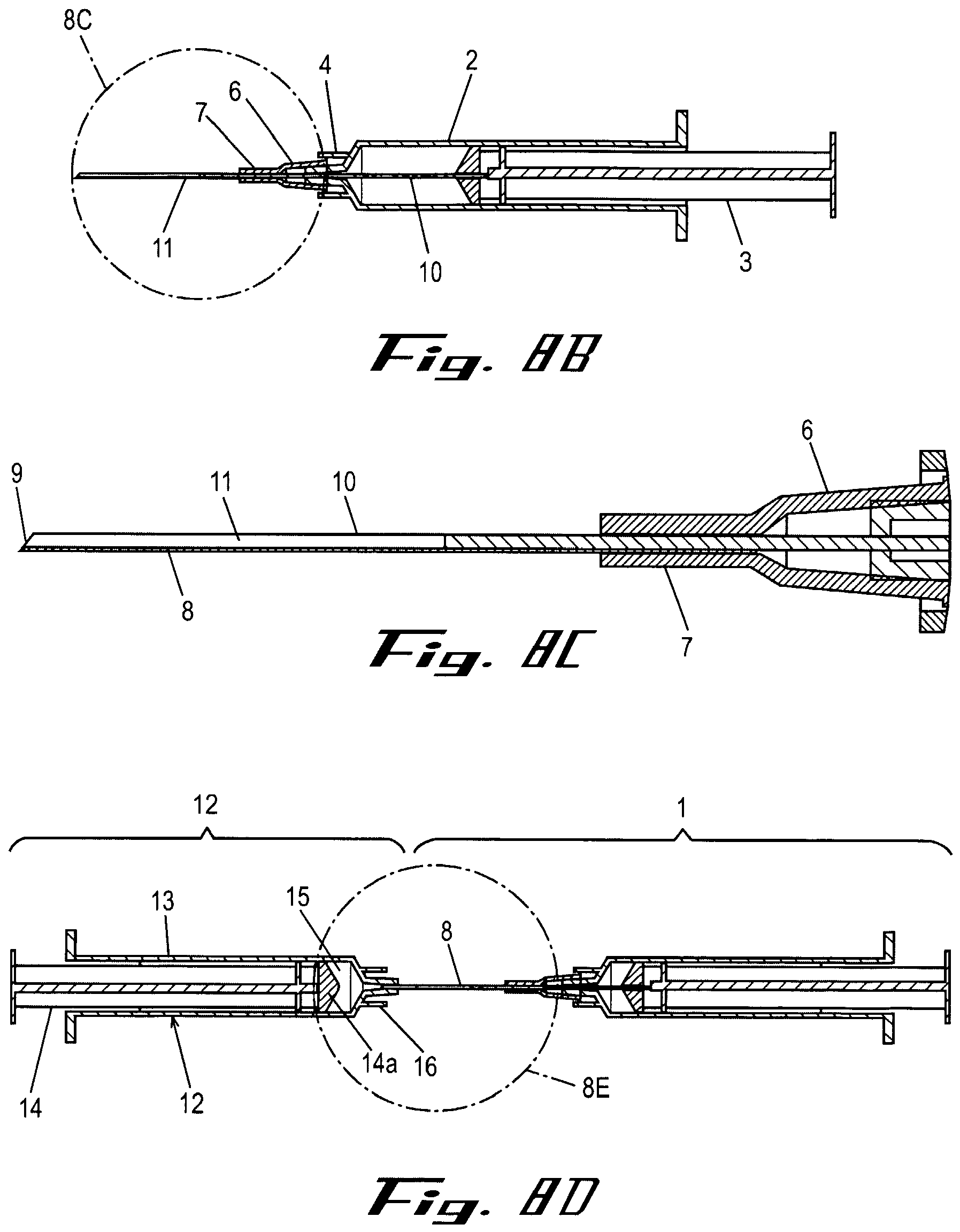 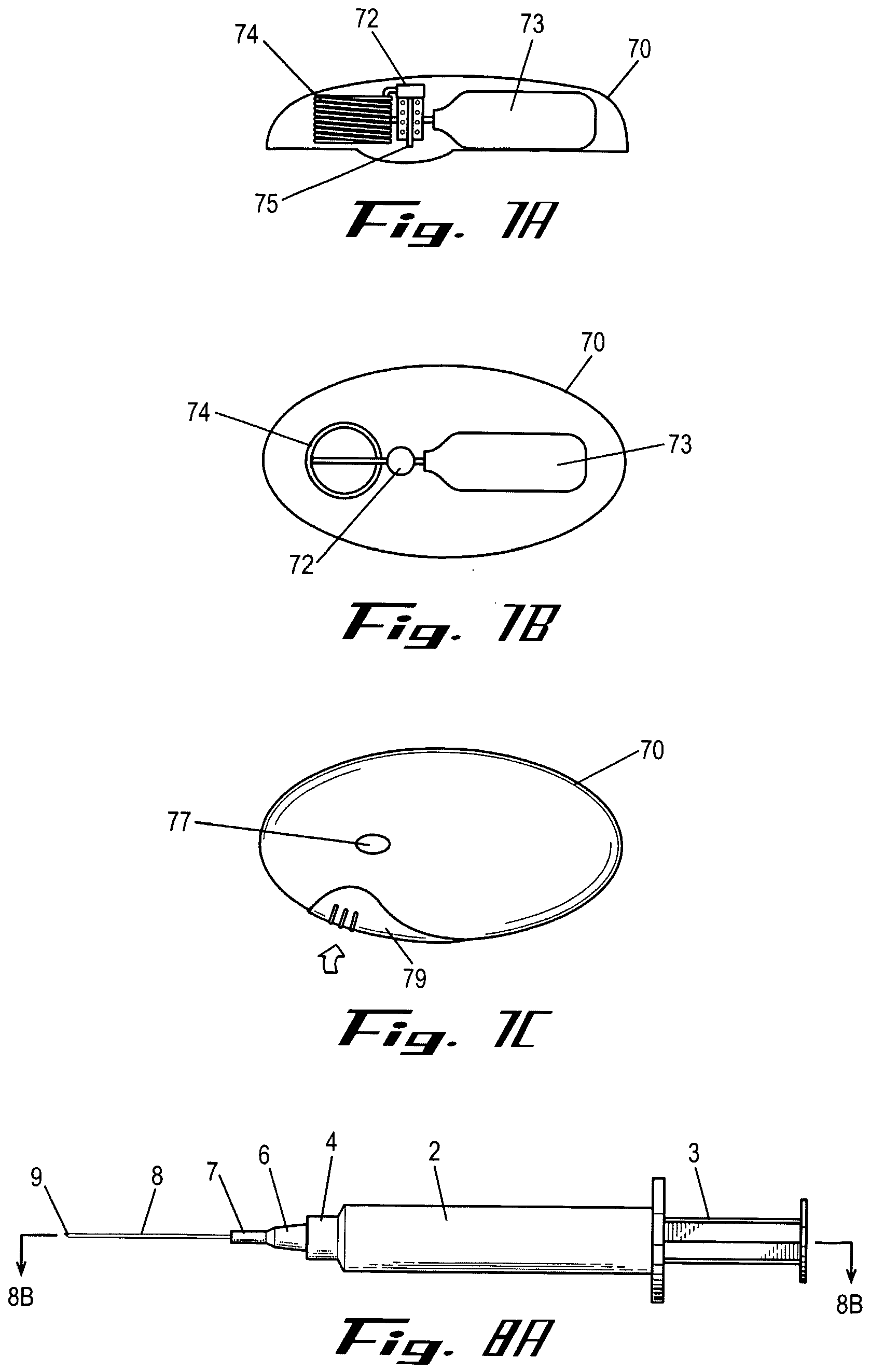 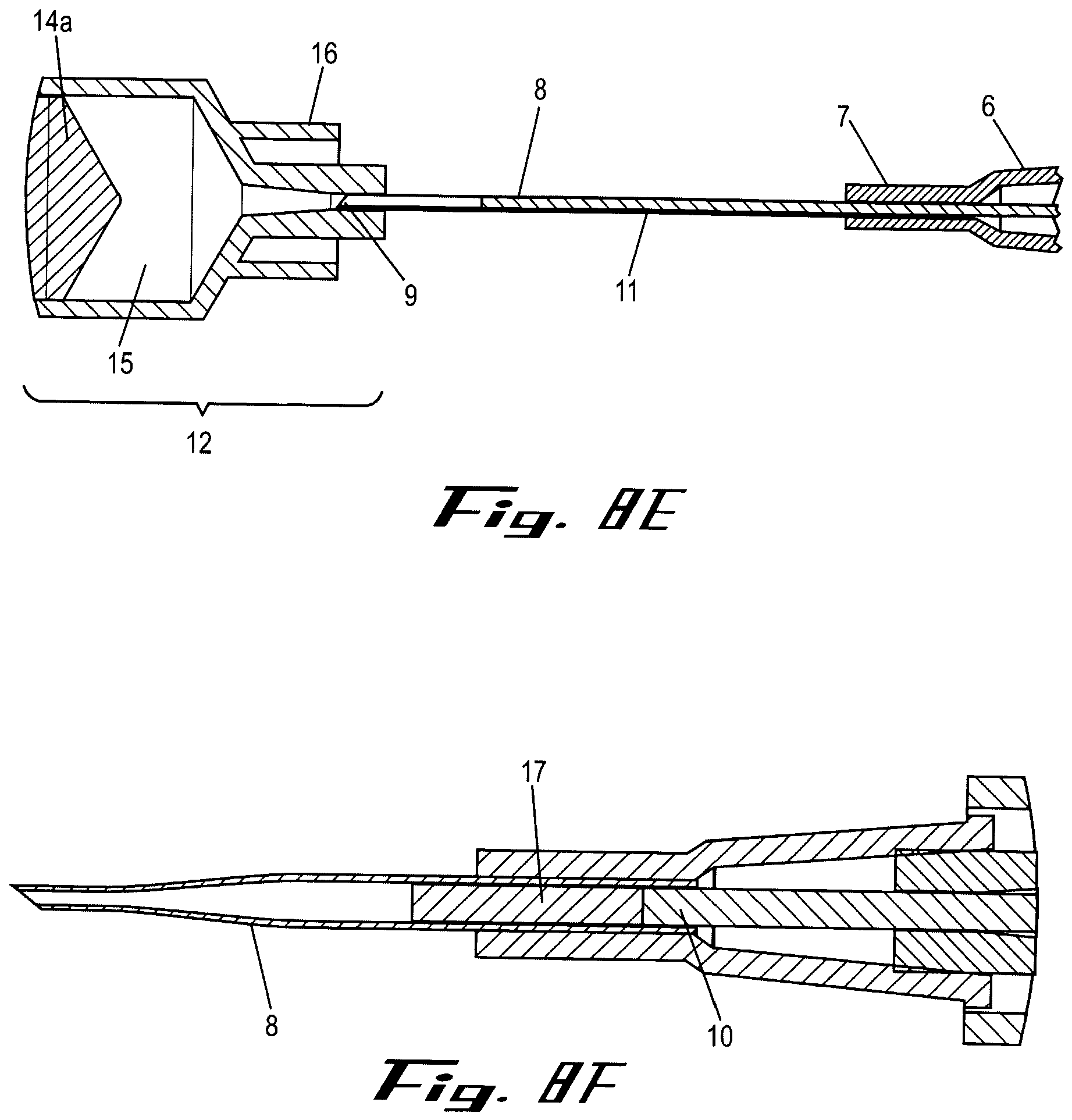