[0002] In the scope of high bitrate multimedia networks in a domestic environment, there is a growing demand to be able to have digital contents on the various available multimedia devices such as television sets, computers, games consoles, tablets or smart-phones. Hence, it appears necessary to have on these devices a concurrent dual frequency band wireless access that enables data and multimedia applications to be carried simultaneously.
[0003] Currently, some products offer concurrent wireless access (WiFi) in the 2.4 GHz and 5 GHz frequency bands. In this case, the 2.4 GHz frequency band is assigned to the transfer of standard data or video while the 5 GHz frequency band is assigned to the transfer of high-definition streams or high resolution games.
[0004] However, the 2.4 GHz WiFi band only has three adjacent channels while the 5 GHz WiFi band has 24 channels. A WiFi access point ensuring concurrent functioning in two contiguous 5 GHz frequency bands enables the distribution of contents in future domestic networks to be noticeably improved and limits potential interference problems. However, the challenge consisting in sharing a single system of antennas with two concurrent radio circuits in the same frequency band, namely the 5 GHz frequency band, resides in the isolation capacity between two active circuits, this challenge being all the more significant as the two frequency bands are practically contiguous.
[0005] In this case, very high rejection exterior filters are required to ensure sufficient isolation for correct concurrent functioning. However, currently no filtering device exists operating in the 5 GHz frequency band that enables isolation in the order of 40 dB to be obtained. Analysis carried out on active filters has demonstrated limitations due primarily to their linearity. Topologies of low-pass / high-pass type with mixed structure, passive elements and microstrip, have been simulated. The simulations show that a high number of poles are required to ensure the required performances, which results in complex filters.
[0006] In order to limit the number of poles, there was an effort to produce a symmetrical response stop band type filters for each of the two 5 GHz WiFi bands either the band 5.15 - 5.35 GHz for the low band or the band 5.45 - 5.72 GHz for the high band, the challenge being to ensure a rejection of 40 dB in the 120 MHz separating these two bands
[0007] To produce asymmetrical response stop band filters responding to the criteria above, work was based on the studies made by Hussein Nasser Hamad Shaman in his thesis of August 2008 entitled "Advanced ultra wideband (UWB) microwave filters for modern wireless communication" at Heriot-Watt University. In this thesis describing different types of ultra wideband microwave filters, Shaman compared performances relating to the bandwidth of diverse structures formed from a transmission line and a "stub". Thus as shown in figure 1, Shaman compares the performances of:
[0008] The simulation of three embodiments A, B, C provided the reflection curve S11 and the transmission curve S21 shown on the right of the figure 1. As these curves show, it can be seen that a greater rejection can be obtained with the embodiment C, namely the stub in open circuit.
[0009] Complementary studies were carried out forming a stop band filter using two resonators as shown by C in figure 1. According to a standard topology, two resonators were mounted in series in the same direction, as shown in figure 2 or in series head to tail as shown in figure 3. More specifically, the band-stop filter constituted of two resonators in series in the same direction shown in figure 2, were realised as follows: on a substrate 10 with a conductive layer, were implemented a first resonator 11a and a second resonator 11b mounted in series in the same direction, the two resonators 11 a and 11 b being interconnected via a coupling line 12. These resonators can be symbolised by the elements R1 and the coupling line by the element Phi representing the coupling phase between resonators. Likewise, in figure 3, a band-stop filter is shown formed of two resonators in series head to tail. Thus, on a substrate 20 equipped with a conductive layer was produced a first resonator 21 a interconnected via a coupling line 22 to a second resonator 21 b mounted head to tail with respect to the resonator 21 a. The two embodiments of figures 2 and 3 were simulated providing, for the coupling line 12 or 22, different lengths that enable the inter-resonator coupling phase to be modified. The curves shown in figures 2 and 3 shows that the inter-resonator phase coupling modification induce a displacement of reflection zeros without modification of the response in transmission. This specific non-reciprocal behaviour of the coupling can be used to increase the steepness of the stop band filter either on the right or on the left, according to the 5 GHz frequency band to be rejected.
[0010] It can be seen that the adjustment in the length of inter-resonator coupling is the same as shifting one of the reflection zeros close to the desired cut-off frequency and that an inverse behaviour is obtained depending on whether the resonators in series are in the same direction, as in figure 2, or head to tail, as in figure 3. This interesting property is thus exploited to design asymmetric response stop band filters for which will be used a filter formed of resonators in series in the same direction or a filter formed of filters in series head to tail, according to selectivity on the left or right flank.
[0011] However, the implementation of several resonators as described in figures 2 and 3 does not enable easily used stop band filters to be obtained. The filters obtained have a significant size, as each resonator is locked on λ/4.

[0012] Consequently, the present invention proposes a new stop band filter structure using resonators constituted of stubs in open circuit inserted in a transmission line, specifically a microstrip line, that has both a significant rejection in the operating frequency band, namely 5 GHz in a particular embodiment, and that is also compact.
[0013] The purpose of the present invention is thus an asymmetrical response stop band filter comprising, a substrate with a ground plane, an etched transmission line extending between an input terminal and an output terminal and at least two resonators, each resonator being constituted by a section of printed line or "stub" in open circuit, embedded into the printed transmission line, characterized in that the at least two resonators are positioned in parallel together, on the substrate and interconnected in series in the same direction or head to tail. The parallel position of the resonators enables a compact filter to be obtained. Contrary to standard microstrip type topologies, this structure has a co-planar propagation mode and as a result, no coupling appears between the various resonators, the field remaining concentrated between the stub and the associated slots.
[0014] According to another characteristic of the present invention, the number of resonators constituting the filter is calculated according to the level of rejection required. Moreover, the length of the transmission line interconnecting two resonators, corresponds to a coupling length less than 20° at the frequency considered for a connection in series in the same direction and at 90° for a connection in series head to tail.
[0015] In addition, to enable the surface of the substrate to be further reduced, the substrate is a low loss substrate such as the substrate known as Arlon 25N. The substrate used can also be a standard hyper-frequency substrate such as the substrate called R04003 by Rogers.
[0016] The present invention also relates to a diplexer enabling operation in the adjacent frequency bands, characterized in that it comprises two asymmetrical response stop band filters as described above, the two filters being interconnected via an interconnection line ensuring their reciprocal isolation, one of the filters operating in the high band and the other filter operating in the low band of the band of operating frequencies.
[0017] Preferably, the filter operating in the high band comprises resonators interconnected in series head to tail and the filter operating in the low band comprises resonators interconnected in series in the same direction.

[0018] Other characteristics and advantages of the invention will appear upon reading the description of different embodiments, this description being realized with reference to the enclosed drawings, wherein:

Figure 1, already described diagrammatically represents different embodiments of resonators as well as their transmission and reflection curves, according to the frequency.

Figure 3, already described, shows another embodiment of a stop band filter formed of two open circuit "stub" type resonators, mounted in series head to tail as well as the transmission curves for different lengths of the coupling line between the two resonators.

Figure 4 shows a first embodiment of a high rejection stop band filter in accordance with the present invention as well as the reflection and transmission curves of said filter.

Figure 5 shows a second embodiment of a high rejection stop band filter in accordance with the present invention as well as the reflection and transmission curves of said filter.

Figure 6 shows, for the embodiment of figure 5, the reflection and transmission curves according to the number of resonators constituting the stop band filter.

Figure 7 shows an embodiment of a diplexer constituted by two stop band filters according to the embodiments of figure 4 and figure 5 as well as their reflection and transmission curves.

Figure 8 shows the measured responses of a particular embodiment of stop band filters in (a) and of the diplexer in (b). 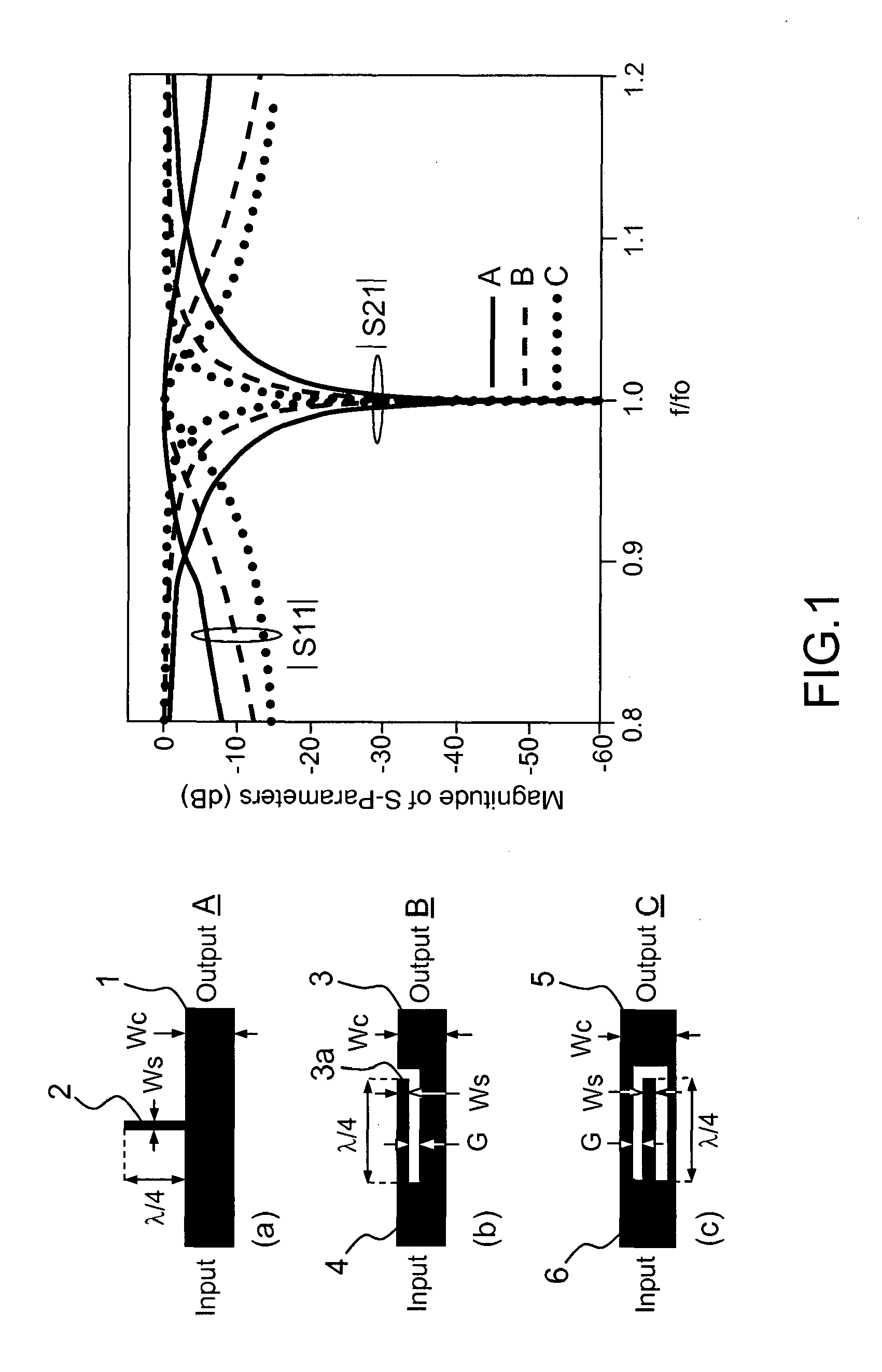 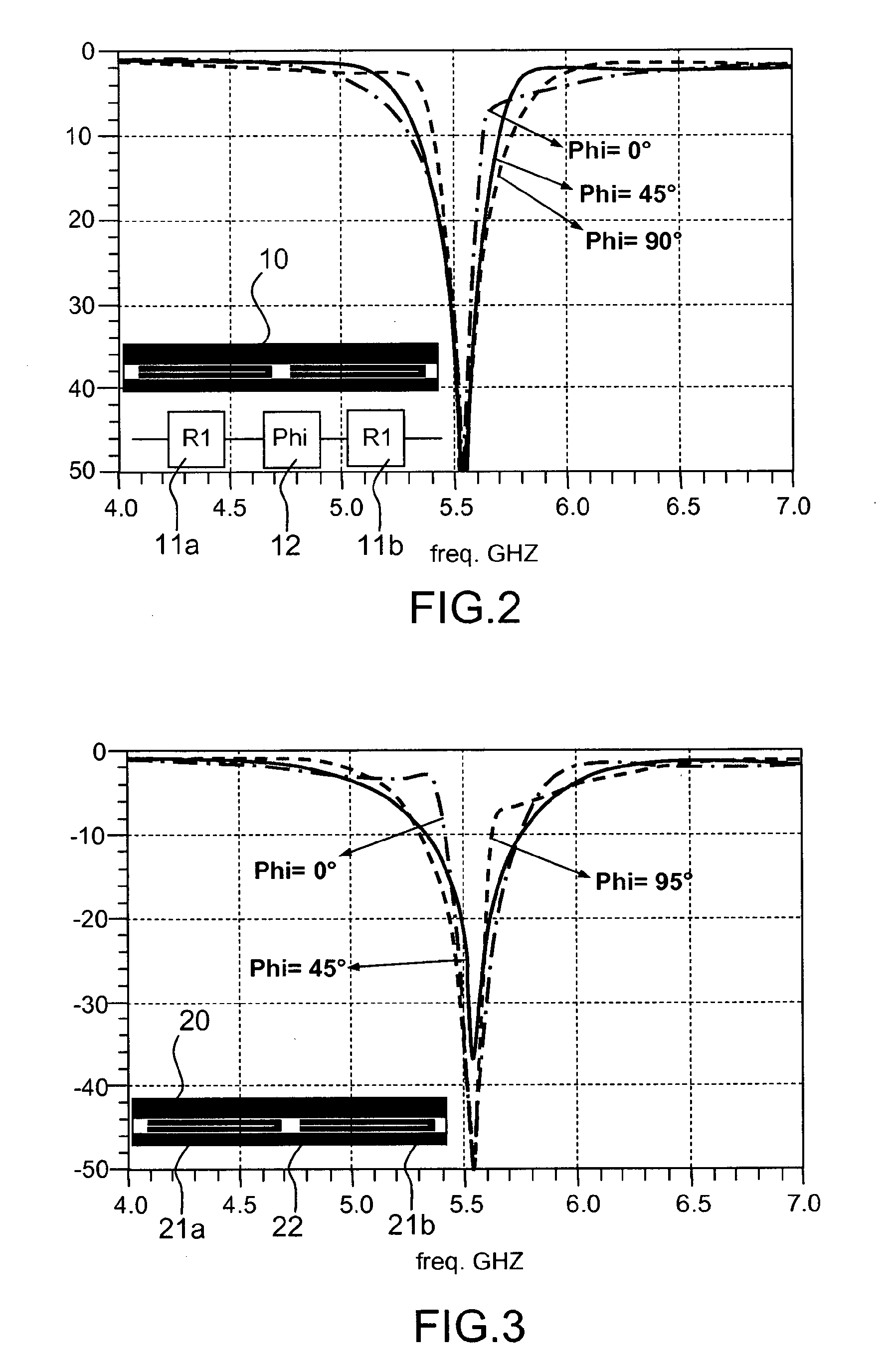 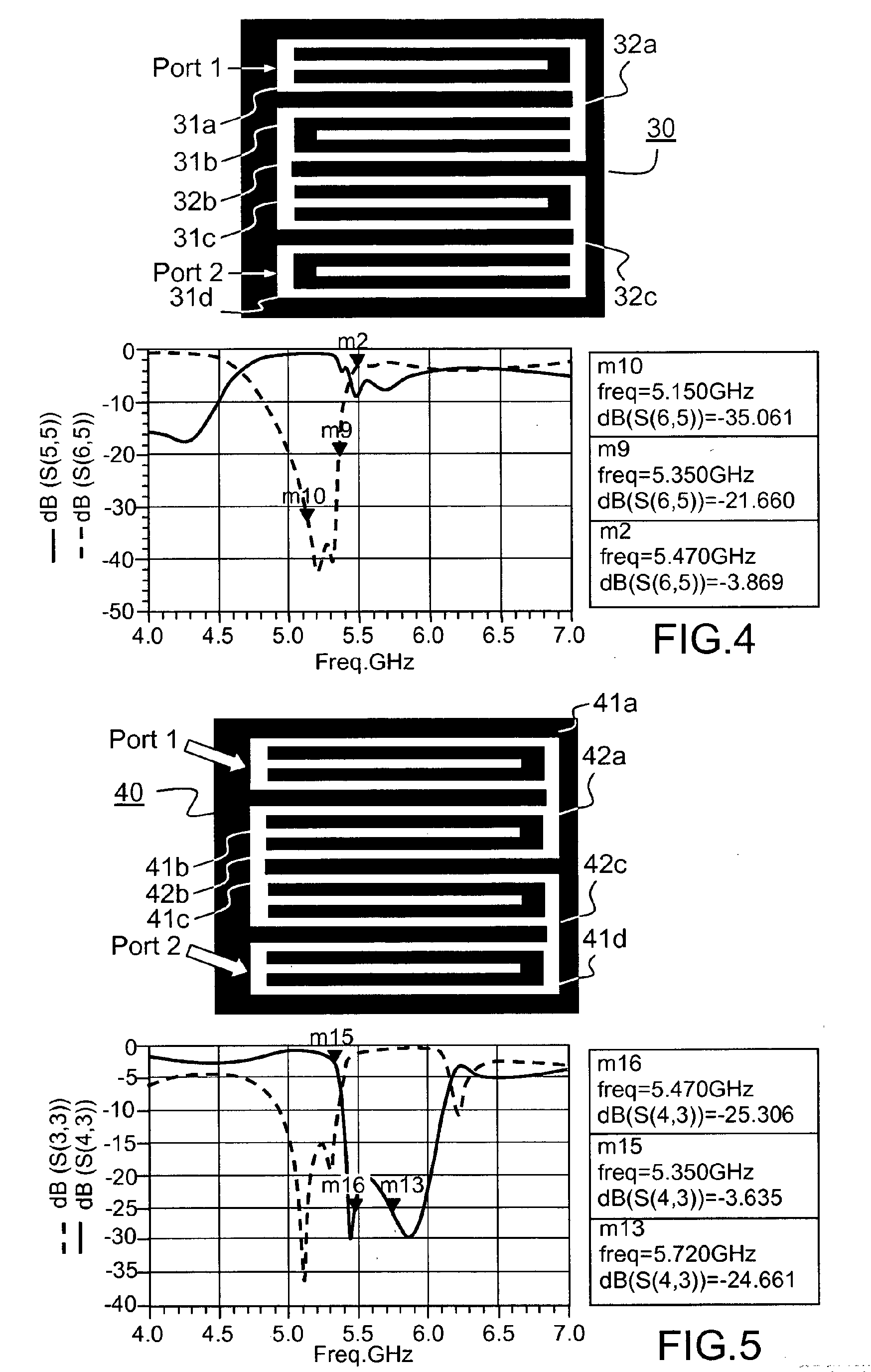 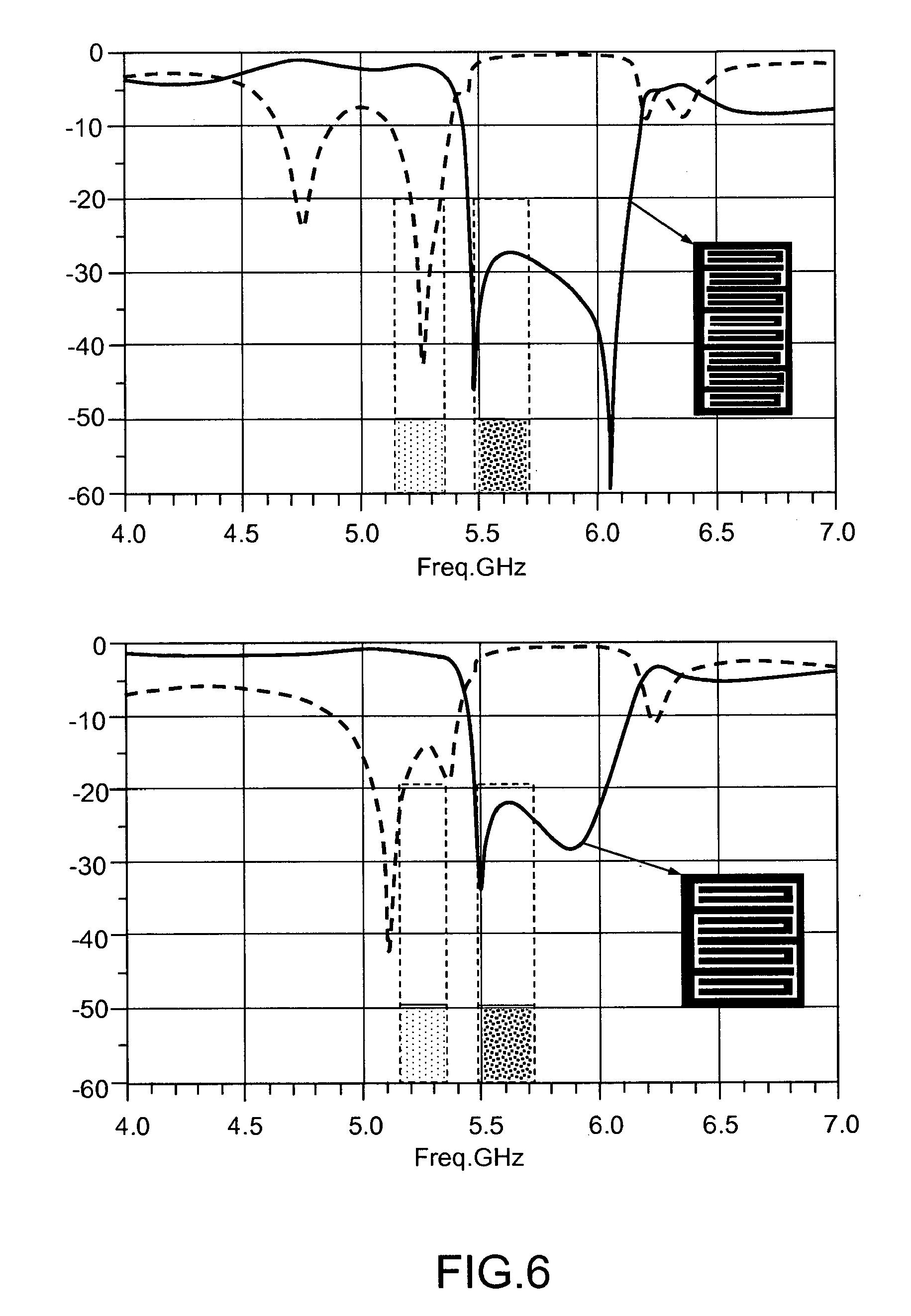 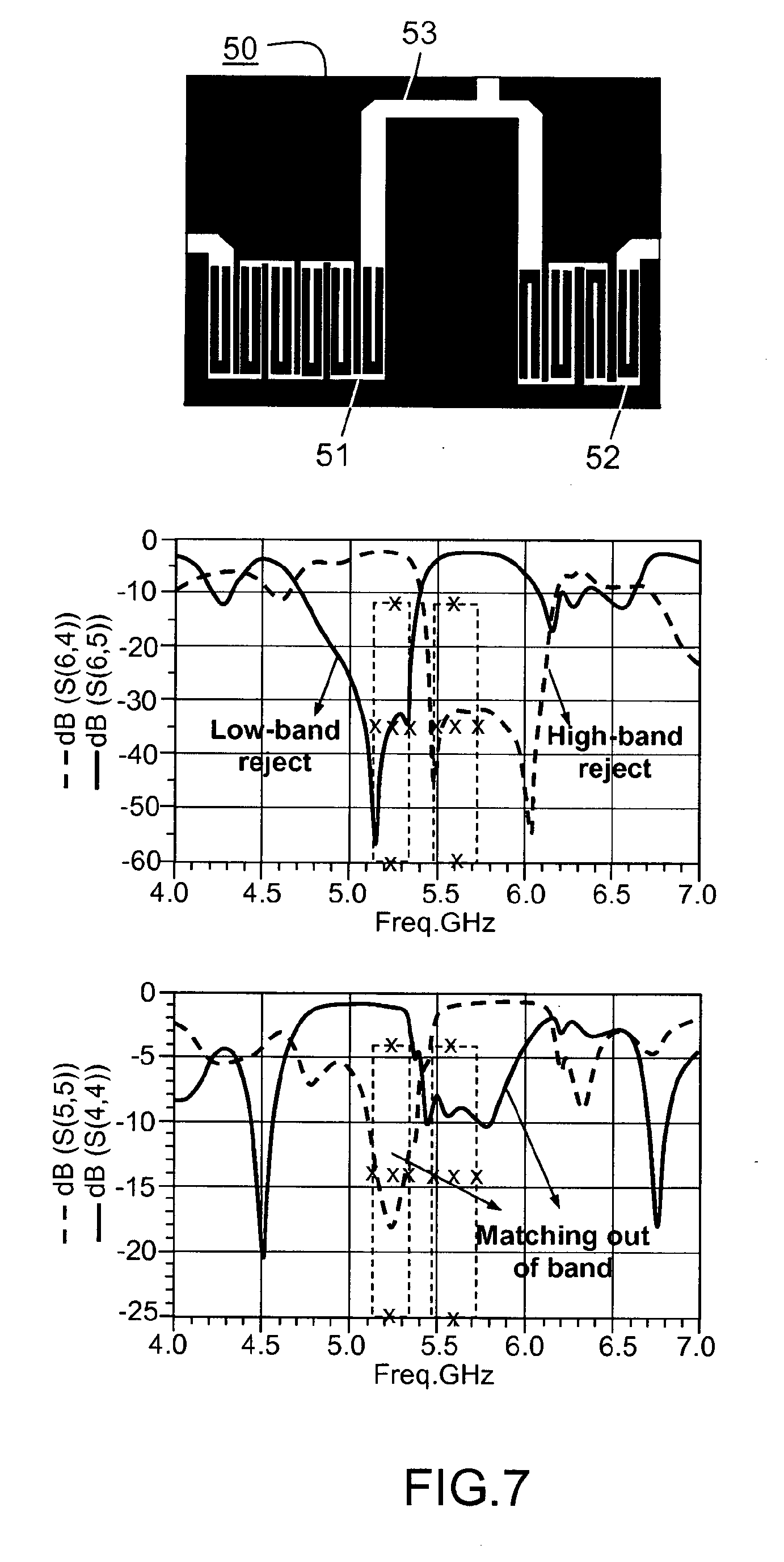 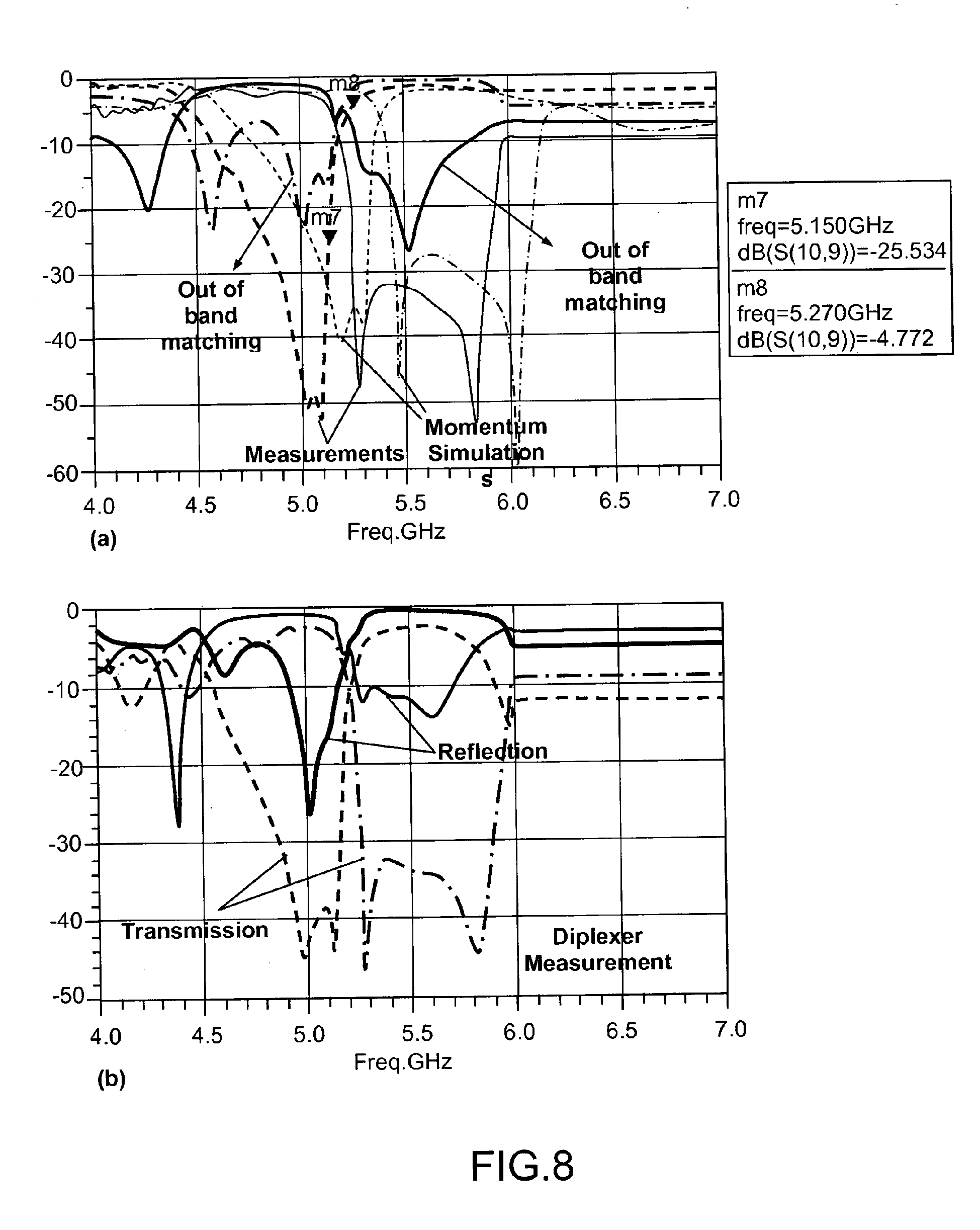