[0002] A "bus" is a collection of signals interconnecting two or more electrical devices that permits one device to transmit information to one or more other devices. There are many different types of busses used in computers and computer-related products. Examples include the Peripheral Component Interconnect ("PCI") bus, the Industry Standard Architecture ("ISA") bus and Universal Serial Bus ("USB"), to name a few. The operation of a bus is usually defined by a standard which specifies various concerns such as the electrical characteristics of the bus, how data is to be transmitted over the bus, how requests for data are acknowledged, and the like. Using a bus to perform an activity, such as transmitting data, requesting data, etc., is generally called running a "cycle." Standardizing a bus protocol helps to ensure effective communication between devices connected to the bus, even if such devices are made by different manufacturers. Any company wishing to make and sell a device to be used on a particular bus, provides that device with an interface unique to the bus to which the device will connect. Designing a device to particular bus standard ensures that device will be able to communicate properly with all other devices connected to the same bus, even if such other devices are made by different manufacturers. Thus, for example, an internal fax/modem (i.e., internal to a personal computer) designed for operation on a PCI bus will be able to transmit and receive data to and from other devices on the PCI bus, even if each device on the PCI bus is made by a different manufacturer.
[0003] Currently, there is a market push to incorporate various types of consumer electronic equipment with a bus interface that permits such equipment to be connected to other equipment with a corresponding bus interface. For example, digital cameras, digital video recorders, digital video disks ("DVDs"), printers are becoming available with an IEEE 1394 bus interface. The IEEE ("Institute of Electrical and Electronics Engineers") 1394 bus, for example, permits a digital camera to be connected to a printer or computer so that an image acquired by the camera can be printed on the printer or stored electronically in the computer. Further, digital televisions can be coupled to a computer or computer network via an IEEE 1394 bus.
[0004] However, many devices exist without any sort of IEEE 1394 interface. This presents a problem as such devices are unable to be to be connected with other devices as described above. There is a heartfelt need to overcome this problem to provide connectivity to devices that otherwise cannot be connected to an IEEE 1394 bus.
[0005] US patent no. 6,181,300 B1 discloses a display format conversion circuit with resynchronization of multiple display screens. Published European patent application EP 0690630 A2 describes a digital serial data interface suitable for video and audio data. Published European patent application EP 0875882 A2 describes a multi-scan video timing generator for format conversion. US 5 805 233 A1 is directed to produce a digital video signal from an analog signal.

[0006] The present invention controls the transmission of data between a computer and a video client via an interface device that buffers the data frames sent and communicates to the computer and the video client using different protocols. Described herein is a method of performing data transmission flow control according to claim 1.
[0007] Many other features and advantages of the present invention will be realized by reading the following detailed description, when considered in conjunction with the accompanying drawings, in which:

FIG. 2 illustrates the format of a frame in accordance with examples of the present invention;

FIGS. 3A and 3B illustrate the format of the first data packet and following data packet, respectively;

FIGS. 4A and 4B illustrate the organization of video data within data packets in accordance with the examples of the present invention;

FIGS. 5A and 5B illustrate the organization of audio data within data packets in accordance with the examples of the present invention;

FIGS. 6 and 7 illustrate elements of a header included in the frame in accordance with examples of the present invention;

FIG. 8 illustrates a collection of packets that combine to form a frame in accordance with examples of the present invention;

FIG. 9E illustrates an alternative example in which the transmitter divides the SDTI stream across multiple channels;

FIG. 10 illustrates in flow chart form acts performed to provide external clocking between a computer and a hardware interface in accordance with examples of the present invention;

FIG. 11 illustrates the register memory map for the interface device in accordance with examples of the present invention;

FIG. 12 illustrates organization of AA/ global registers contained within the interface
of the present invention;

FIG. 13 illustrates organization of global status registers contained within the interface device of the present invention;

FIG. 14 illustrates the isochronous control register contained in the interface device of the present invention;

FIG. 15 illustrates the organization of the flow control register contained in the interface device of the present invention; and

FIG. 16 illustrates the organization of the isochronous channel register contained in the interface device of the present invention.

[0022] Serial unit register map 304 references a login register. A device attempting to communicate with serial unit 300, is referred to herein as an initiator. For example, an initiator can be computer 100, or other nodes connected on a network via a high-speed serial bus and in communication with interface 106. The initiator writes the 64 bit address of the base of its serial register map to the login register to log into serial unit 300. If another initiator is already logged in, serial unit 300 returns a conflict error response message. The high 32 bits of the address are written to the Login address, the lower 32 bits to Login+4. The serial unit register map also references a logout register. The initiator writes any value to this register to log out of the serial unit. After every bus reset the initiator must write its (possibly changed) nodeID to the reconnect register. If the initiator fails to do so within one second after the bus reset it is automatically logged out. The 16-bit nodeID is written to the bottom 16 bits of this register, the top 16 bits should be written as zero. A read of the TxFIFOSize register returns the size in bytes of the serial unit's transmit FIFO. A read of the RxFIFOSize register returns the size in bytes of serial unit 300's receive FIFO. A read of the status register returns the current state of CTS/DSR/RI/CAR (if supported). The status register is organized as shown in Table 4.
TABLE 4

[0029] The send data register is used when the initiator sends block write requests to this register to write characters into the transmit FIFO. Block writes must not be larger than the transmit FIFO size specified by the TxFIFOSize register. If there isn't enough room in the Tx FIFO for the whole block write, then a conflict error response message is returned and no characters are copied into the FIFO.
[0030] Also included in serial unit 300 is an initiator register map having a plurality of registers, organized as shown in Table 11.
TABLE 11

converting, at the interface device (106), the received input video data to scanned lines;

deriving, at the interface device (106), a vertical blanking interval based on the conversion of the scanned lines;

2. The method of claim 1, wherein the frames of data (108) additionally comprise audio data.

3. The method of claim 1, wherein the frames of data (108) are National Television System Committee (NTSC) compliant.

4. The method of claim 1, wherein a size of at least one frame of said plurality of frames of data (108) varies to accommodate various data sizes.

5. The method of claim 1, wherein the frames of data (108) are of a predetermined size.

6. The method of any preceding claim, wherein the input video data according to the first format comprises one or more analog signals.

7. The method of any of claims 1-5, wherein the input video data according to the first format comprises one or more digital signals.

8. The method of claim 7, wherein the digital signals are compressed. 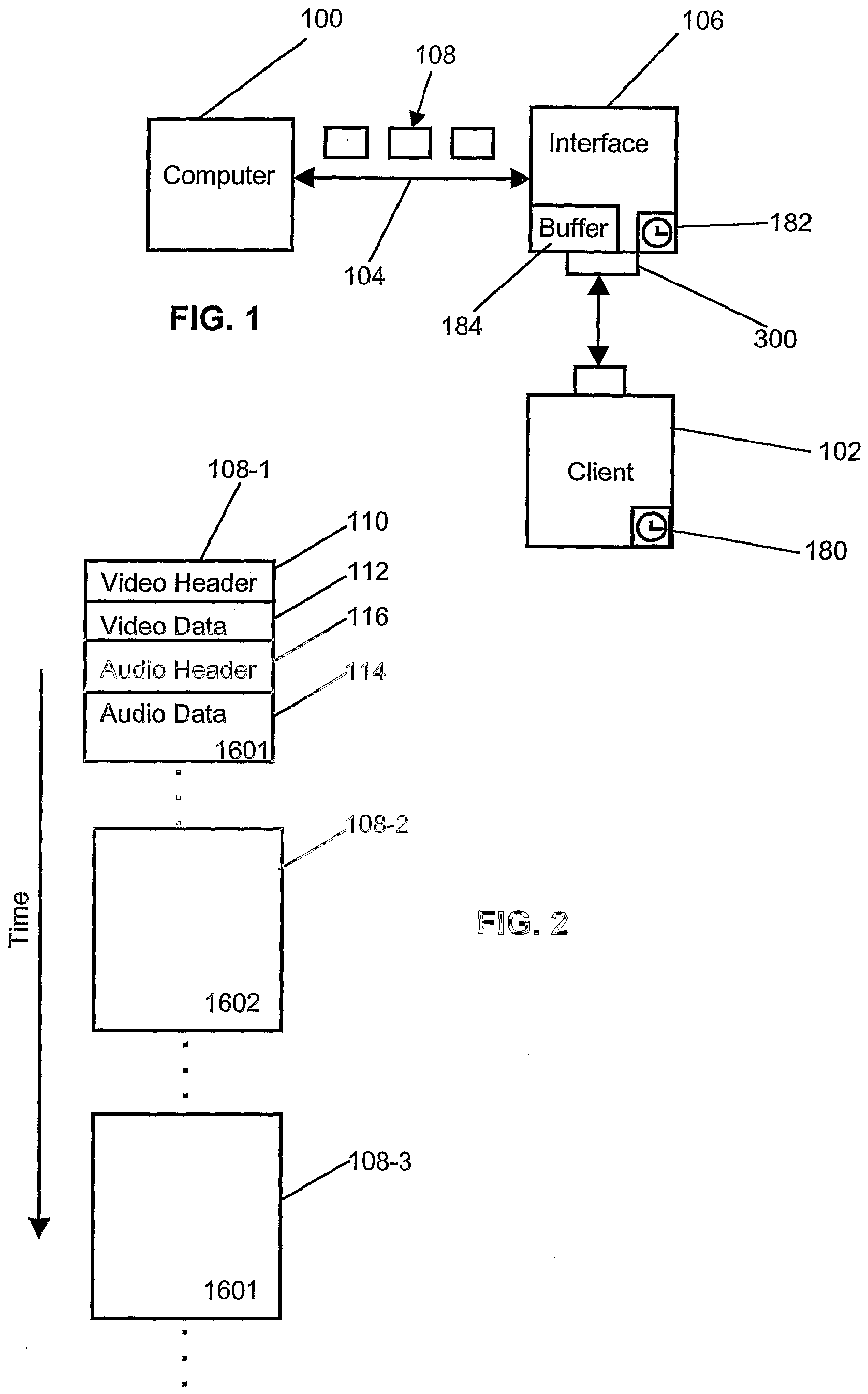 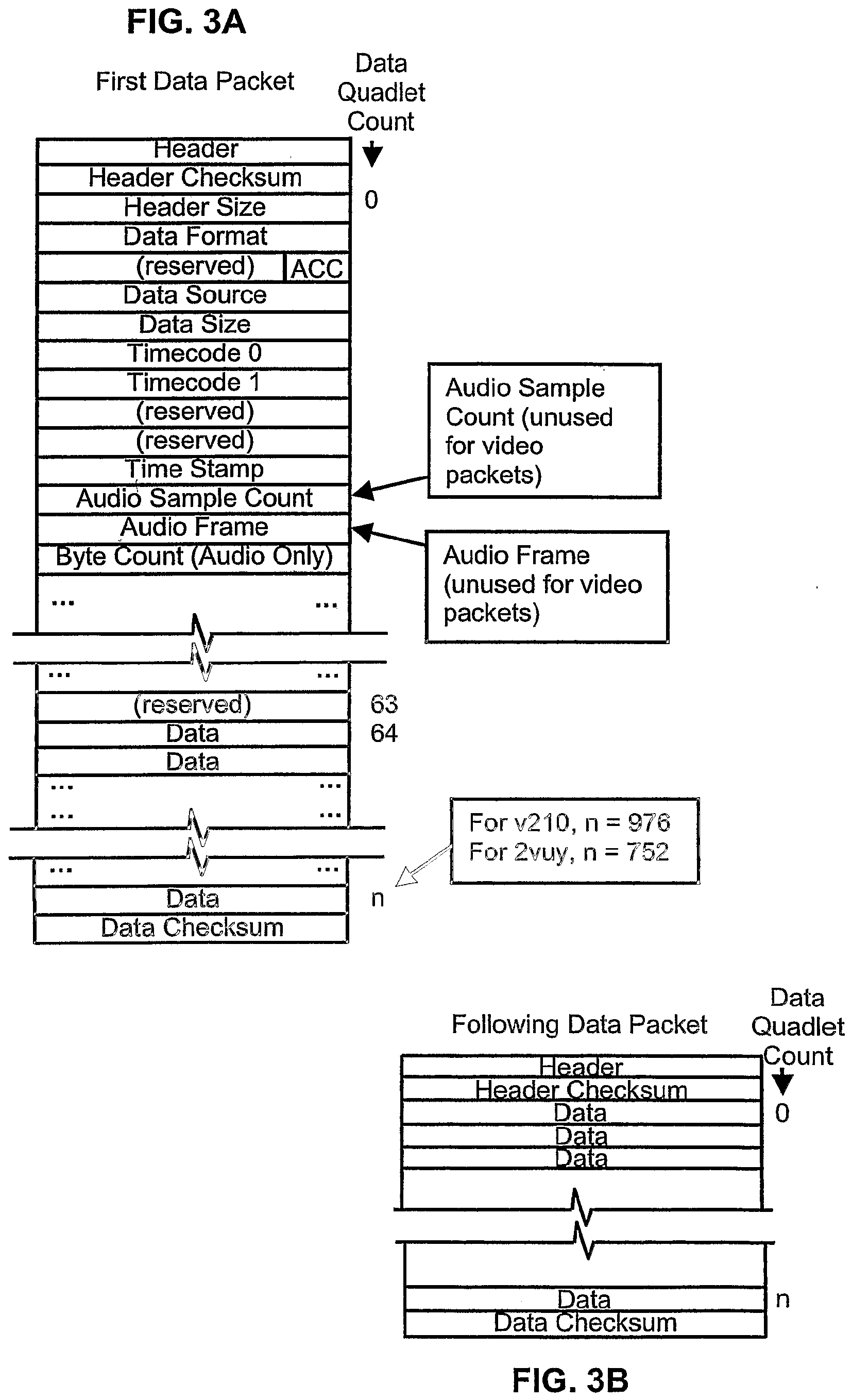 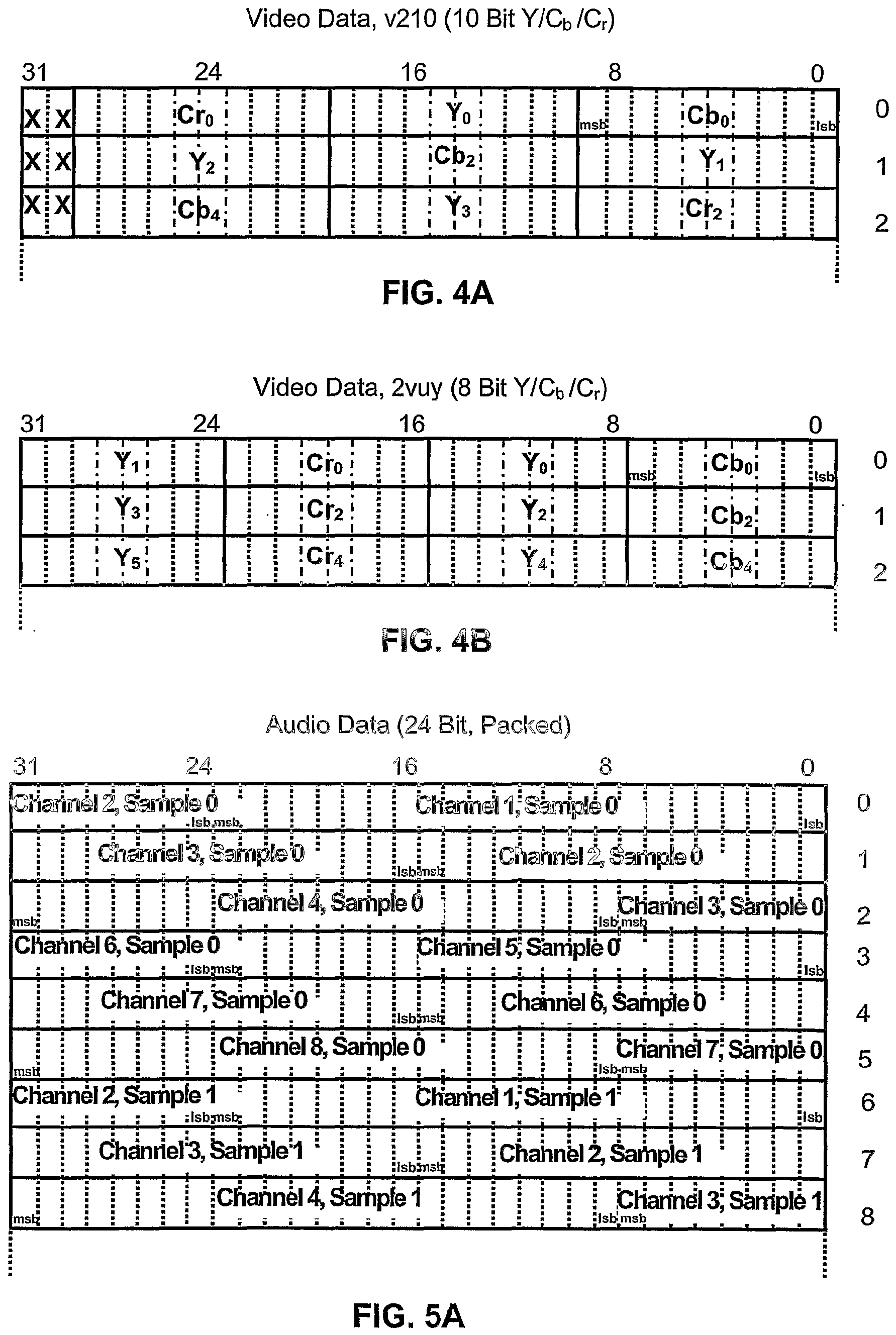 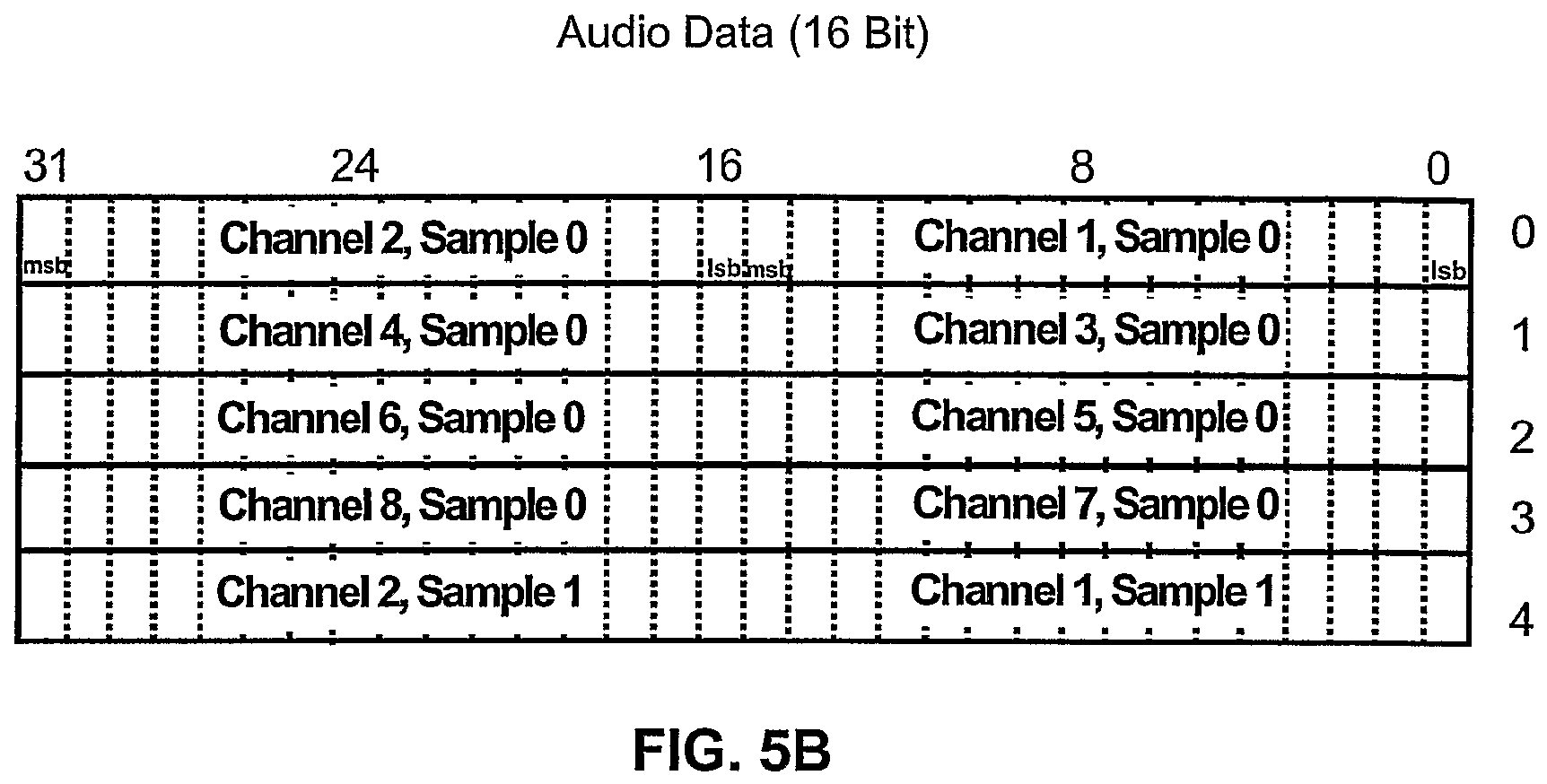 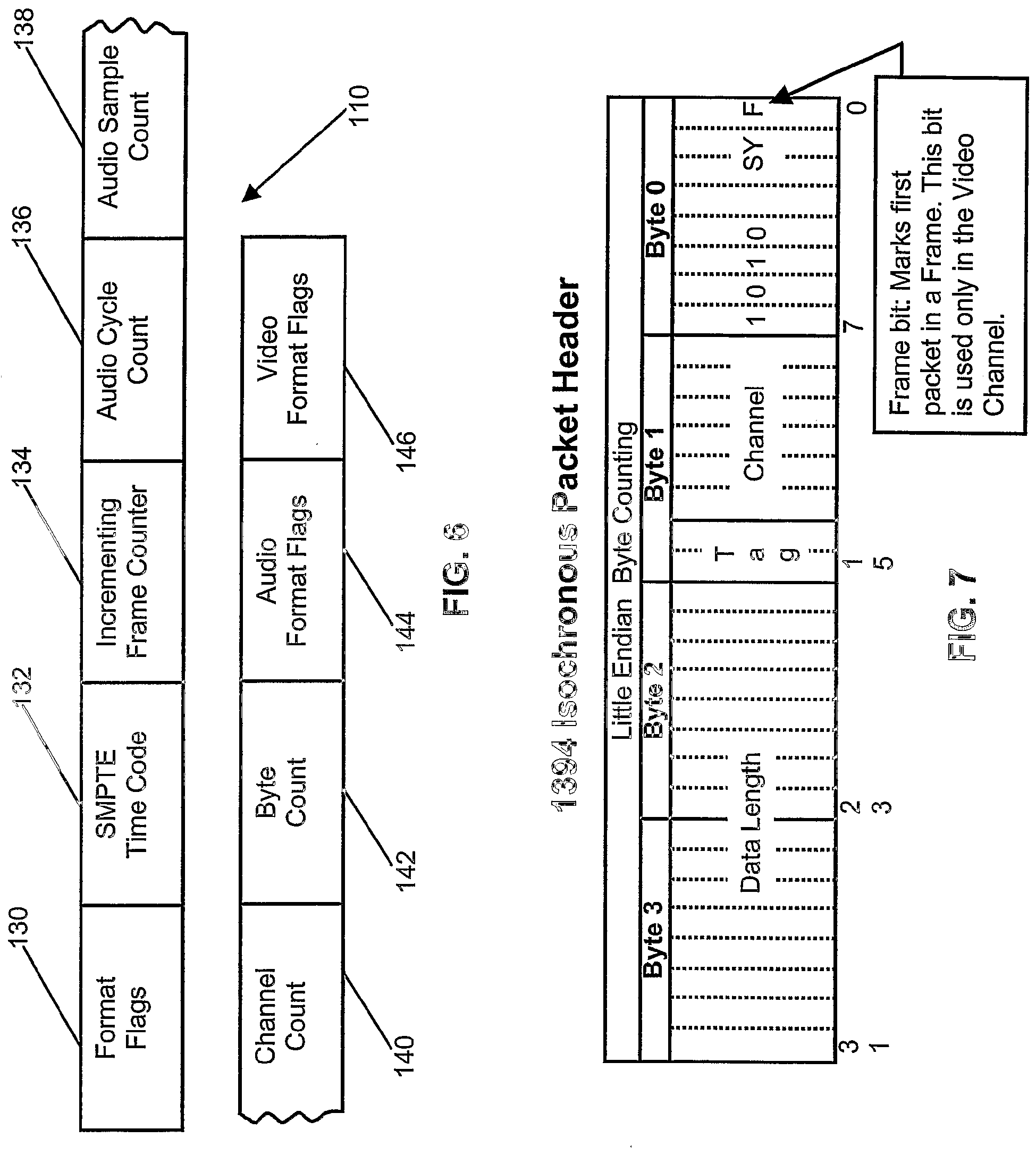 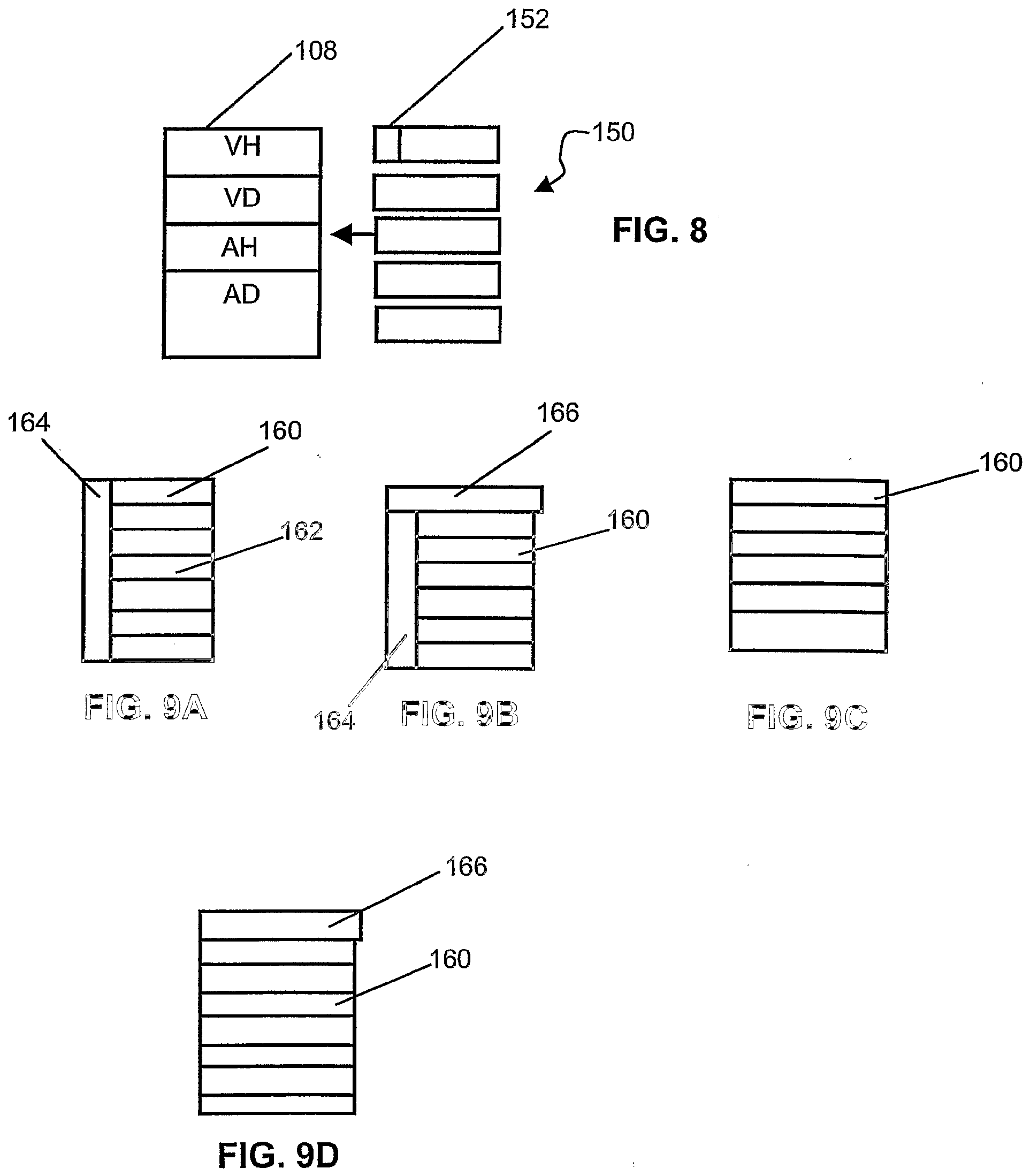 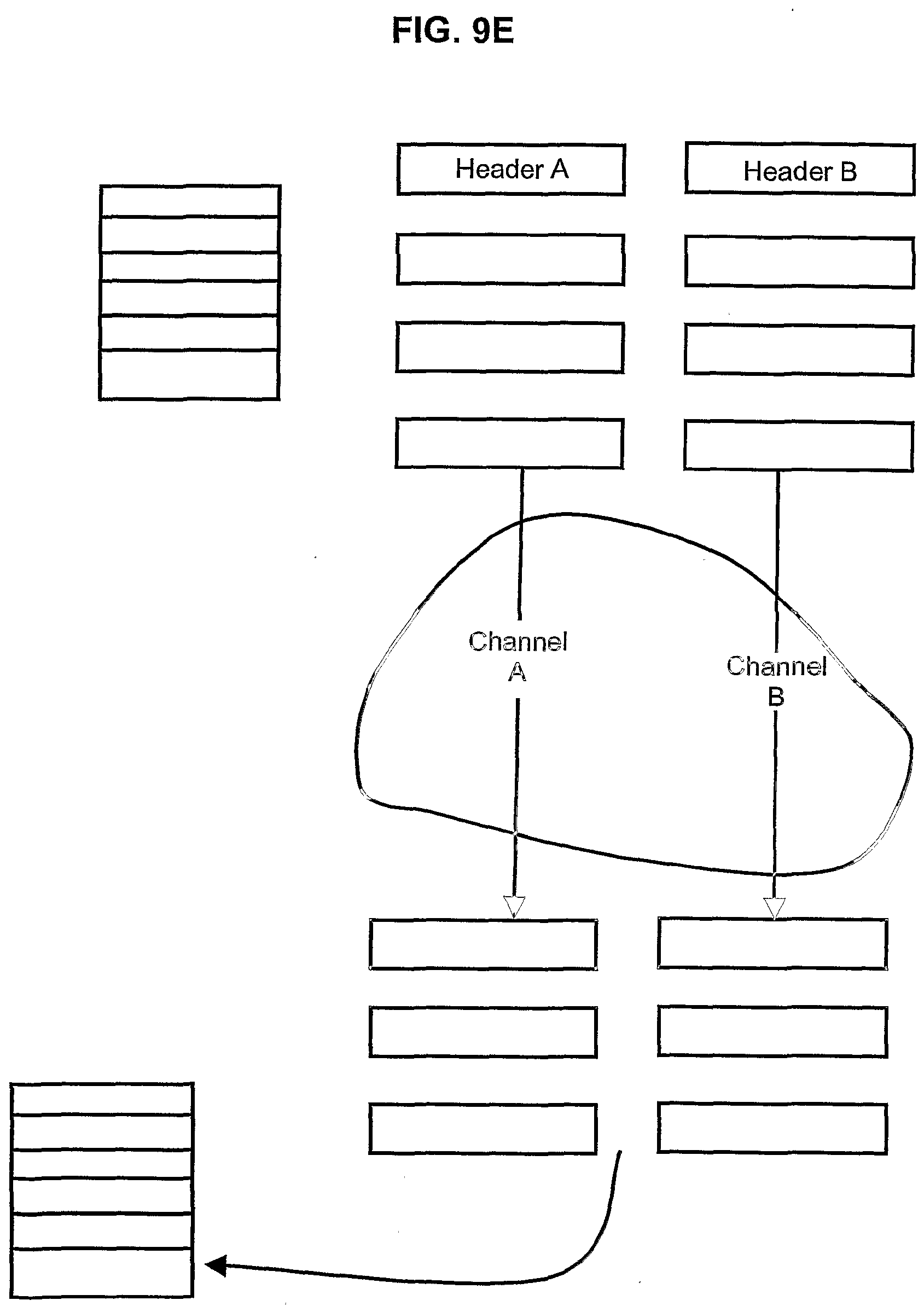 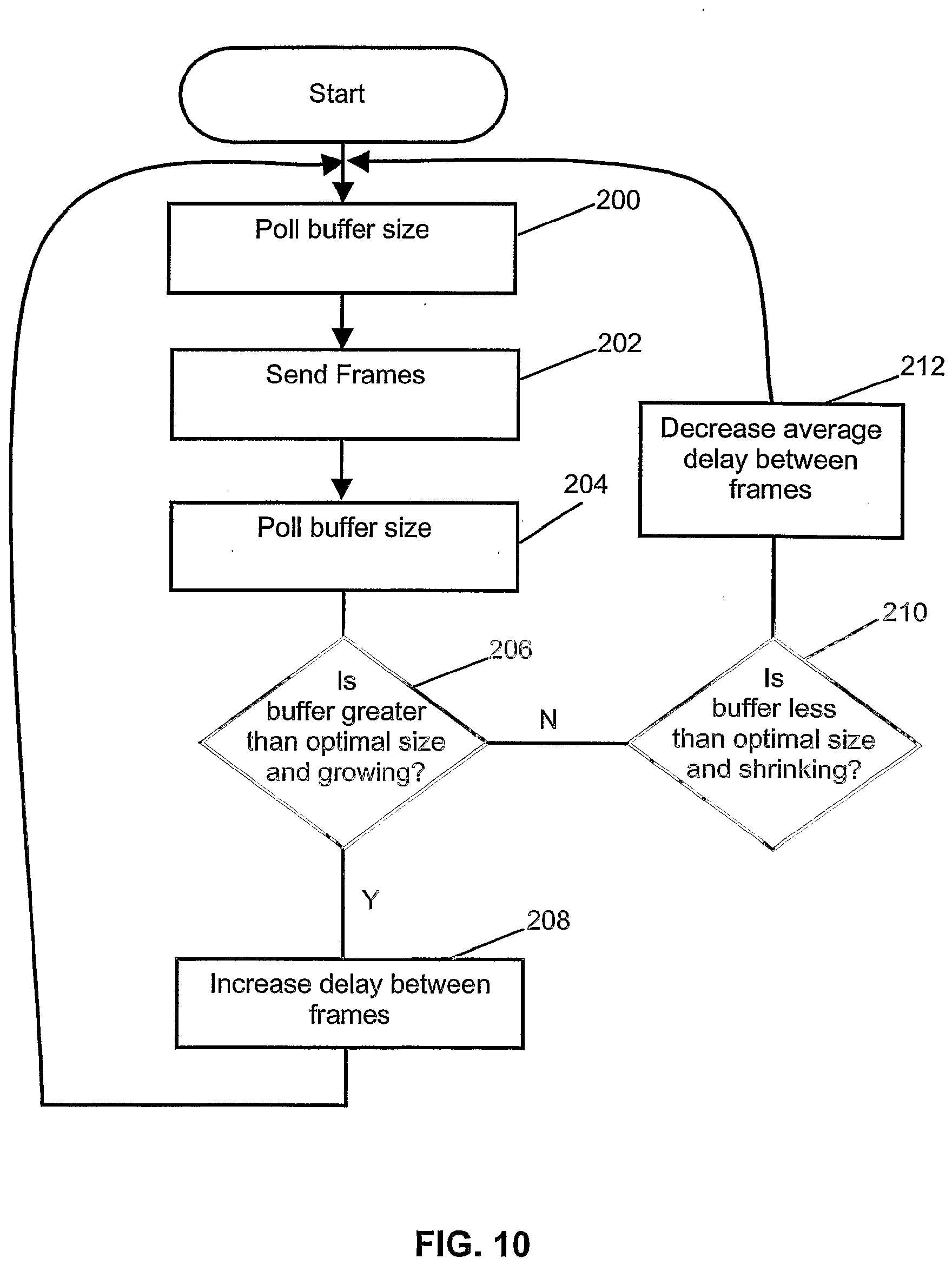 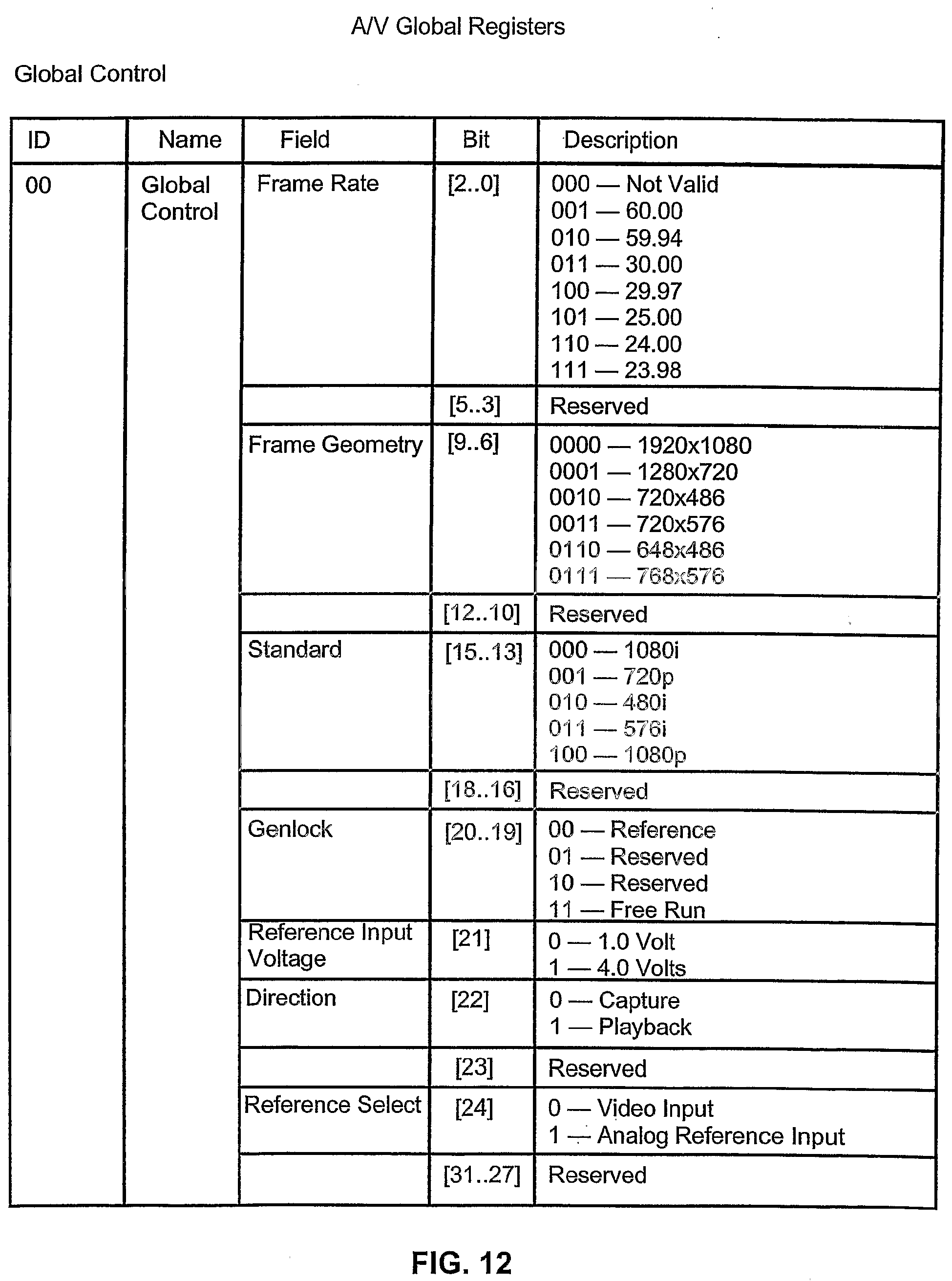 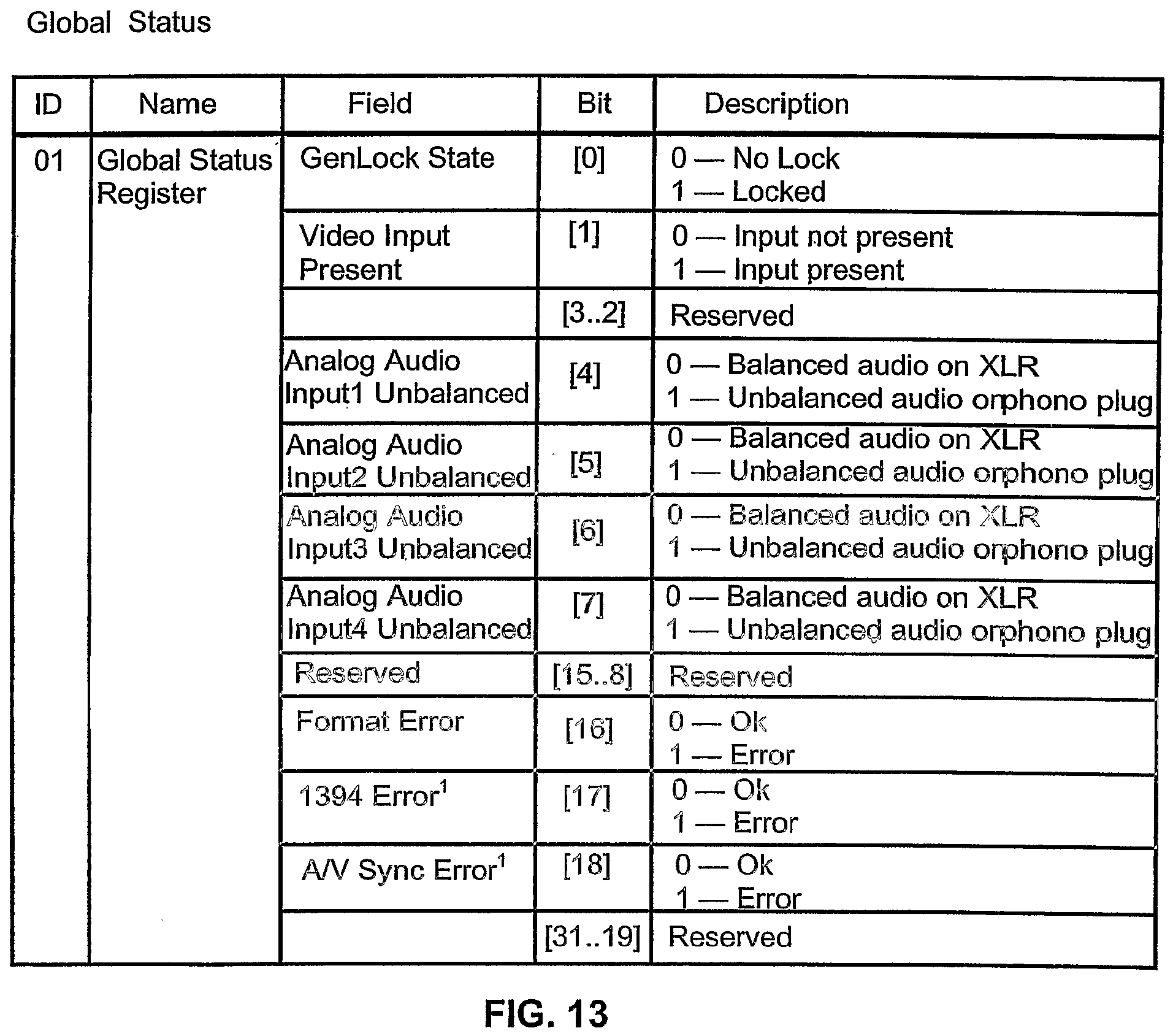 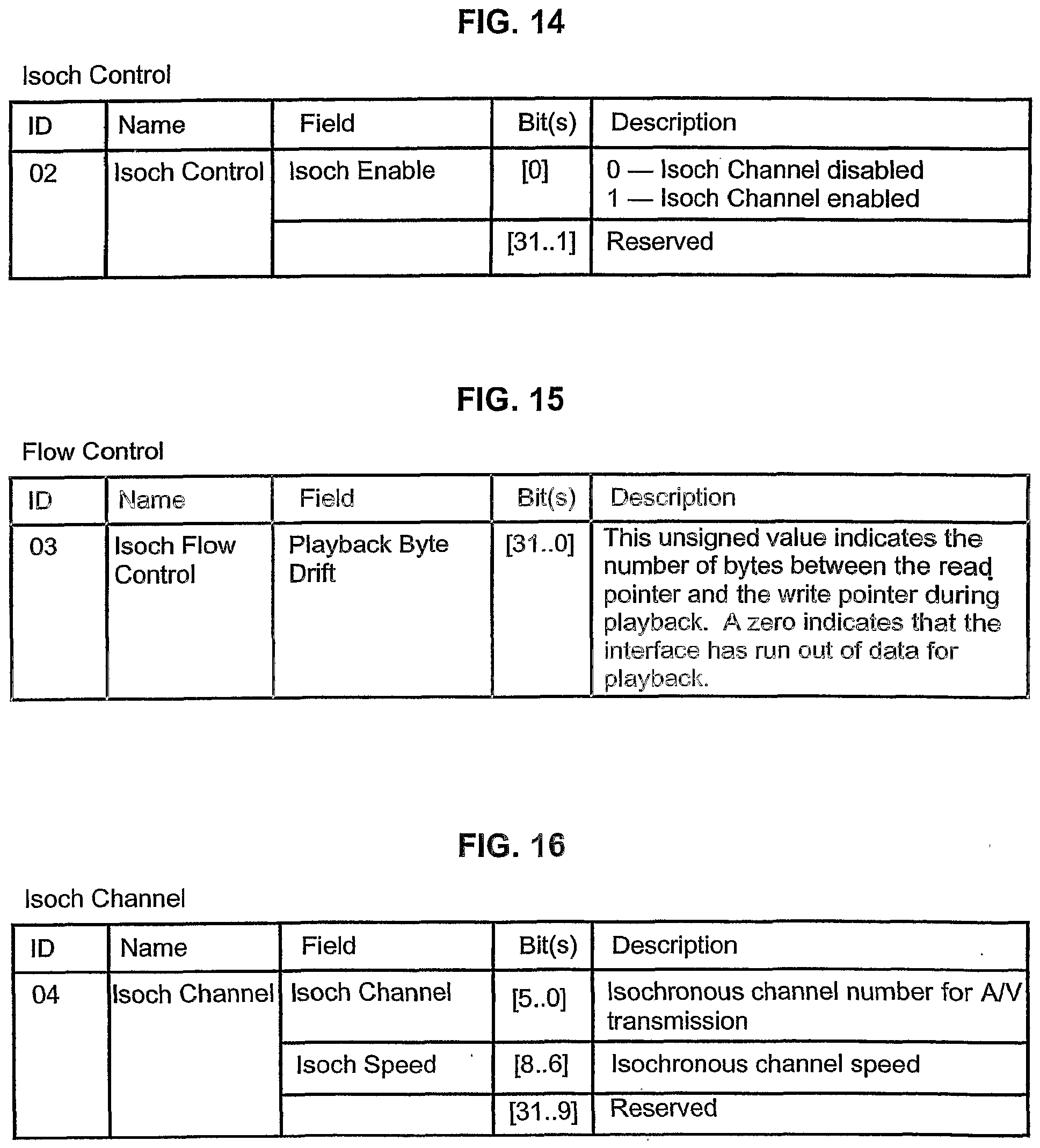